A Pop of Spice

I like to think outside the box.  I also sometimes like to sit inside the box and pretend that it's a time machine, or an airplane, or a silent padded room, but that's another story.  So when Curry's sent me their meat spice rub, using it on meat was the last thing that came to my mind. 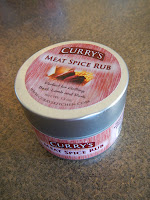 The Meat Spice Rub is a very interesting mix of spices.  When you open it, you are immediately hit with an aroma reminiscent of sweets, almost like licorice and gingerbread.  That makes sense, because it has many of what I generally think of as "sweet" spices in it, like cloves, star anise, and cinnamon.  But then you can smell a hint of the smokier spices, and spices with more of a snap in there as well, like the cumin and the black pepper.  It was totally intriguing to me.  I love a good divergent flavor blend, whether it's salty-sweet like chocolate-covered pretzels, or salty-sour like salt and vinegar chips, or spicy-sweet like the smell of this rub.  It reminded me slightly of Chinese 5 spice (probably the star anise), and that made me think of an amazing caramel sauce that I made with Chinese 5 spice a while back.  Not wanting to do the same thing again, but loving that salty-sweet-spice direction, I decided to go with a spiced kettle corn.

Full disclosure: I have never tried to make my own actual kettle corn before.  I have let the people at the market with the huge copper kettles do it.  I have made my own popcorn, buttered it, and then sprinkled it with blends of salt or sugar or other flavors like cinnamon or garlic.  But I've never actually made the real deal in my kitchen.  Until now.

Probably the most important part (besides constant attention) of making kettle corn is the pot.  You need a big pot that has a top,with a thicker bottom that heats evenly.  With adding sugar into the hot oil, you can easily end up with a burned mess if the pot isn't right, and that's not yummy at all.

Before you start, get a large paper grocery bag, or a very large bowl ready to mix it once it's popped. 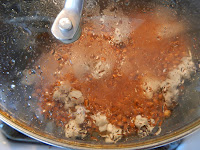 Place the pot on medium heat and add a couple tablespoons of oil.  I used coconut oil, but vegetable oil will work just fine too.  Throw in a popcorn kernel with it.  When it pops, you'll know that you're at the right temperature to move on.  Add a couple of tablespoons of butter, and give them a quick swirl.  Then immediately add 1/2 cup of popcorn and 3 tablespoons or so of sugar.  Stir it together and then cover the pan.  Keep shaking the pan gently the whole time from now until you're done popping.  It's not long, I promise. 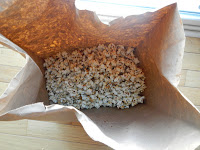 Get the pan off the heat once the pops slow down and the pot is pretty full, and work quickly, because you still don't want it to burn.  Dump the popcorn into the bag (or bowl), but be careful!  Molten sugar burns like nothing else!  Sprinkle it with some salt and anywhere from 1/2 to 1 teaspoon of the meat spice, and give the bag a good shake to combine it all.  Try to restrain yourself (and your housemates) from diving in right away and burning the bejeezus out of your tongue, but once it's slightly cooled, dig in!

The flavors of the meat spice run are exotic, but not overwhelming.  My kids dug in to this kettle corn and never turned back.  We had annihilated the whole bag before my husband got home, but I'm sure he would have loved it too.  It's addictive stuff!   The spices really shine though, and the salty-sweetness of traditional kettle corn is there as well! 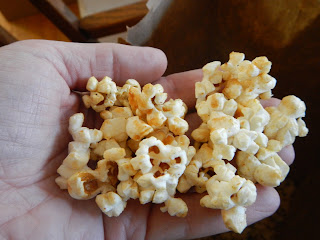 I've been having a ton of fun with the meat spice in the kitchen the past couple of weeks.  It made a great veggie dish when I pan-fried some green beans in olive oil and meat spice and sprinkled them with a little salt.  I think it would work well with other veggies too, like broccoli or cauliflower, and since the kettlecorn worked out so well, I'm looking forward to trying it in sweet veggie tactics like glazed carrots or winter squash!  I also added it into my creamy beefy veggie stuff with fantastic results.  The most recent thing I used it in was a impromptu spinach cheese pie, as an accent flavor.  It's very versatile, and while it is delicious on meats, it has so many more potential applications in meals!  Go ahead and blow up that imaginary box! 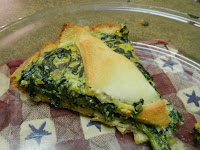 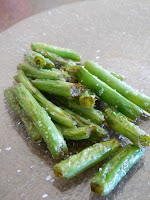 Thanks again to the wonderful people at Curry's for sending me their spice blends to play with and enjoy!

Get a large paper bag or bowl ready to the side.  Heat the oil in a large, thick-bottomed pot over medium heat.  Add the butter, and give it a quick swirl.  Add the popcorn and the sugar, mix quickly, and then cover the pot with a lid.  Shake the pop constantly over the heat until the popping slows down.  Pour the popcorn into the bag (Hot!), add salt and spice mix to taste, and then shake to combine.