Jelly From the Weeds 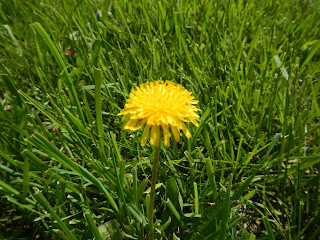 Dandelions also make me think back to high school, where they were the focus of a well-intentioned school project gone awry.  You see, in my advance literature class one year, we divided up into groups, each group was to read a chosen novel and then create their own project to present the novel to the class.  When I saw the title "Dandelion Wine", it called to me.  Baby, I was born this way. So, spearheading my group, I instigated several courses of dandelion edibles that we would serve as our final project.  This was back in the day before Google, so I was largely dependent on some Native American cookbooks hidden in our library.  We had crispy fritters made from dandelion greens and cornmeal, a lightly dressed dandelion green salad, candied dandelion flowers, and, the grand finale, our dandelion wine...which was a few bottles of sparkling grape juice that we shoved dandelion flowers into.  I mean, you can't being alcohol into school, duh.

Quick note: Dandelion Wine is a lovely novel by Ray Bradbury.  I'm not sure that I read more than a couple of pages of it back then.  I don't remember a whole lot about it, but I'm pretty sure that it had very little to do with a million different ways to cook and eat dandelions.  I'm very sure that I didn't care.

Long story short, most of the class ate and enjoyed most of our dandelion concoctions, and luckily, other people in my group had actually read the story and were able to get us through the presenting part.  The high point was when I went to pour a glass of the "wine" for our elderly teacher, and, since it was the bottom of the bottle, about a half dozen soaking, wilted, disgusting looking dandelion blooms plopped into her glass.  Got to love the old bird, she politely choked down a couple of sips, not wanting to disappoint us, I'm sure.  I think we still squeaked out a pretty decent grade on that one.  Higher than the group that read a different novel and did a video presentation that ended up being a homemade kung-fu movie, complete with bad lip syncs.  I think the teacher learned to be more specific in her guidelines that year.

Anyhow, most of us would agree that dandelions are a pain in the rear.  They seem to be especially out of control around here this year.  So, when I stumbled across an old farmers' recipe for dandelion jelly, I was all about the "turning lemons into lemonade" vibe of it.

Probably the most important thing is that you have to find a place where the dandelions haven't been treated, and away from roads or somewhere where they will get a lot of pollution.  For me, I knew that there were tons of them at the nature center by my community garden, and I also know they don't spray.  There were enough of them by the gardens alone to get what I needed.  Technically, I didn't ask permission to pick them, but I'm reasonably sure that no one minds either, and I let plenty of dandelion flowers there for others.  In a good field of dandelions, it shouldn't take you too long to pick about 4 cups worth, especially if you enlist your kids to help you.  My helper was uninterested on the day I picked, so it took me about 20 minutes to get a good amount.  An older lady at the garden who I've chatted with before asked me what I was collecting dandelions for.  When I told her for jelly, she cocked her head to one side in thought.  I guess I was expecting her to reminisce about her grandmother making dandelion jelly for her family as she played in the fields...but instead she shrugged, said, "Huh.  Never heard that one before.", and went on about her gardening.  I still might leave her a jar by her plot, gardener to gardener. 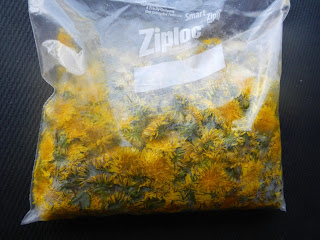 After you have the flowers picked (just the tops, no stems!) comes the most tedious part: separating the petals.  I tried to use scissors, I tried several different techniques, but the best way I found, for me, was doing it by hand.  You want to get the yellow petals, but avoid any green parts.  I found that if I carefully took the top part of the bloom together, above where the green parts came, I could usually rip the yellow parts carefully out.  I parked myself in the garage on a chair for this task, monitoring my little guy riding his bike out front. 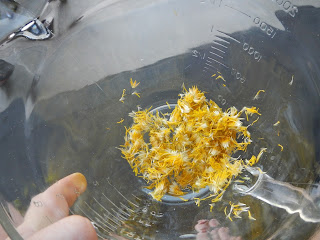 There are several stages that I went through.  First was excitement: This was going to be awesome!  Then came monotony: Wow, was that really all the petals that all those flowers had?  Then came doubt: Is this jelly going to really be worth all this?  Then bargaining  All right, 20 more and then I'll go grab a cool drink from inside.  Finally, acceptance: I have yellow fingers, and that's okay.  It was an experience. 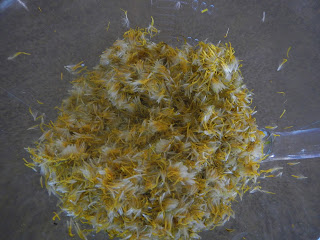 Finally, I had (almost) 4 cups of petals picked.  It was probably about half the bag of what I had picked. 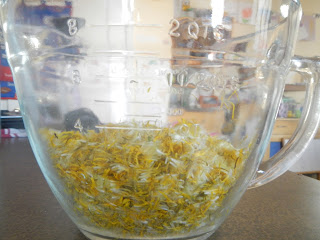 The next step is to steep the petals.  I boiled some water in my kettle, and then poured 5 cups of it over the petals.  In the end, this made enough for 2 batches of the jelly.  When it stopped steaming, I covered it with plastic wrap and let it sit on the counter for 24 hours. 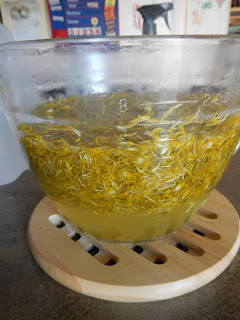 For the next step, I took a fine mesh strainer and lined it with a coffee filter, then I strained the dandelion "tea" through it. 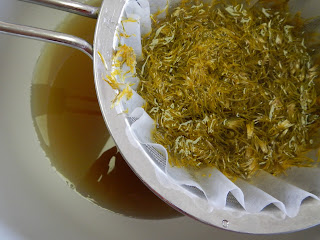 The resulting liquid looked, well, like tea.  Not the prettiest color, but not awful either.  All of the dandelion jelly recipes I found called for adding food coloring, yellow or sometimes green.  Not being a huge fan of artificial coloring, I skipped it and crossed my fingers that the resulting jelly wouldn't be too unappetizing.  At this point, the tea sat in my fridge for another day, because my son came down with a fever and mommy duties called. 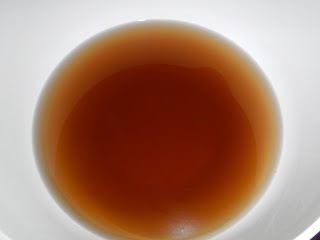 When I was ready to make the jelly, I measured out 2 1/2 cups of the dandelion "tea" and put it in a large saucepan.  (I froze the rest of the liquid...maybe I'll feel like making dandelion jelly again, and that saves me that time of plucking petals.)  Then I added the juice of 1 lemon (about 2 tablespoons) and one box of pectin.  I stirred that to dissolve it and then brought it to a boil.  When it was boiling, I added 5 cups of sugar and stirred constantly until it got up to 220 degrees on my candy thermometer.  Okay, so I didn't exactly stir constantly...but you should, because mine boiled over and I had to clean a lava hot jelly mess off of my stove.  Not cool.

Once it hit jelly stage, I ladled the jelly into sterilized half pint jelly jars that I had prepped earlier.  I probably would have had 7-8, but with my boil-over, I had just short of 6.  The one that wasn't completely full, I stuck in the fridge to use over the next couple of weeks. 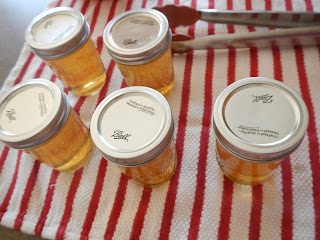 You can find a lot of resources on canning on the internet, and most of them will do a much better job of explaining the "rules" of canning jelly than I can.  But basically, make sure everything is clean, fill them not quite up to the top, and seal them tightly.
In a boiling water canning system (pot, rack, etc.), boil the jars for 10 minutes.  Then remove then to cool.  It always thrills me to hear the little "pop"s of the lids sealing themselves as they cool.  These should store for about a year.  If you want to skip the canning part, use the jelly within a month, and keep it refrigerated. 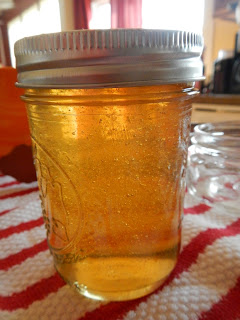 I think the color turned out lovely, even without food coloring.  The taste is delicate, slightly floral, slightly tart, a little bit like honey.  It's great on a biscuit, and would be good on toast as well.  I'm sure I'll find plenty of uses for it in the coming months.

Bonus points: this jelly is totally cheap.  Dandelions: free.  Water: free.  Lemon, pectin, and sugar: less than $5 total for more than you'll need.  To make 8 jars.  Awesome.  (However, if you happen to get one of these as a gift from me, I'm not being cheap...remember all the hard work that went into it too!)

So, maybe now when you see those dandelions poking their heads up all over the place, you'll look at them a little differently.  I know I will! 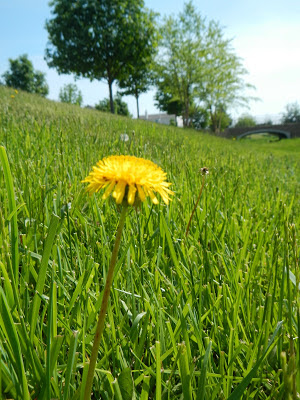