My middle child has many strengths, and many talents.  Somehow, over the last year, she has established herself as the dilly bean queen.  Her sour, garlicky, delicious specialty has quickly become legendary among our friends and family.  She's pretty proud of it, and she has been scoping out my garden waiting for the arrival of these: 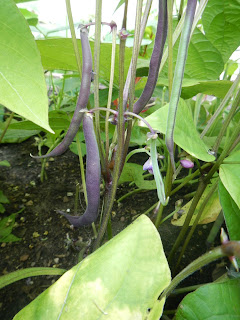 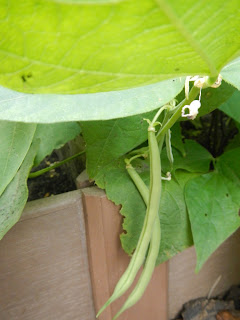 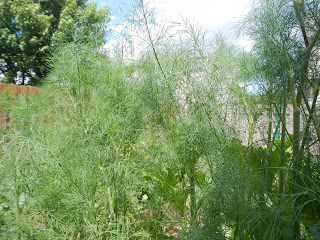 Beans and dill.  And now, they're here.  It's just the beginning of my beans coming in, and usually I wait until we're sick of them to resort to jarring them up, but she's just so darn cute and excited about making the dilly beans that I couldn't say no.

Maybe it's cliche, but this recipe is so easy that a child could do it.  With a little supervision.  Or even two children, as we discovered when she generously decided to let her little brother help this year.  Again, who am I to say no to that?

So, grab some fresh beans. 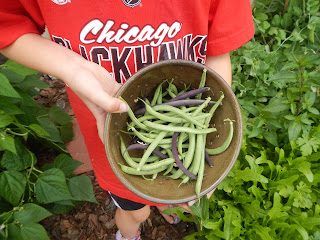 Clean them, and trim the stems. 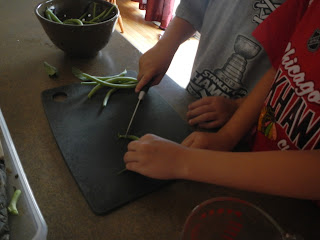 In a small pot, combine a cup of water, a cup of vinegar (white or cider would work, I used white), 2 tablespoons sugar, a teaspoon and a half of kosher salt, and a couple of minced cloves of garlic.  Bring it to a boil to dissolve the salt and sugar, and then let it cool back down to room temperature. 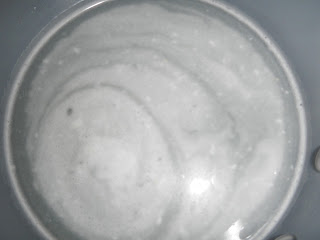 In a larger pot, bring some water to a boil.  While it's coming to a boil, fill a large bowl with ice and water.  When the water is at a full boil, put the beans in for 30 seconds, just to blanch them.  Then drain them and plunge them into the ice water to stop them from cooking.
Drain the beans.  Chop half of an onion into rings or thin strips.  Grab a couple of sprigs of fresh dill.  Someone may have gotten a little overenthusiastic with the dill today... 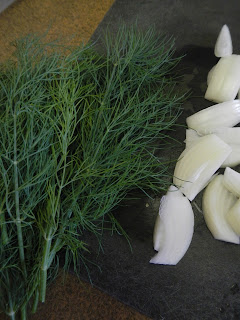 You don't need that much.

Take a clean mason jar and put in the onion, the dill, and some whole black peppercorns and a dash of red pepper flakes.  You can play around with the seasonings and see what you like, but this is a basic winner for our family. 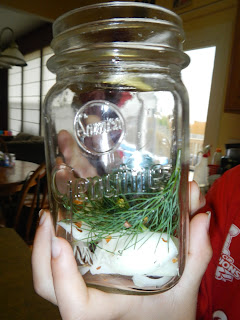 Then, carefully pile as many of the beans as you can into the jar.  We've found that putting the jar on its side is our method of choice.  Really cram those guys in, but make sure that they don't extend over the top of the jar.  You'll want them to all be covered by the brine, once the time comes. 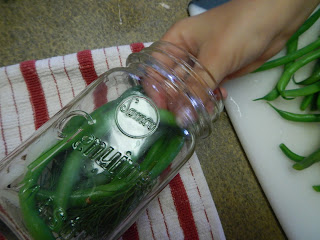 Once you have the jar filled, 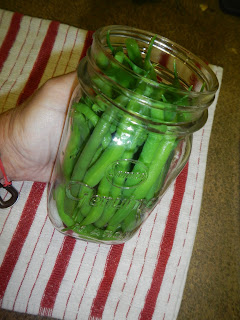 Carefully pour in the brine until it is up to the top.  You may have extra brine, and sometimes I pour out a little from the jar to make room for the garlicy stuff that falls to the bottom of the pot.  Or, if you have enough, make two jars' worth! 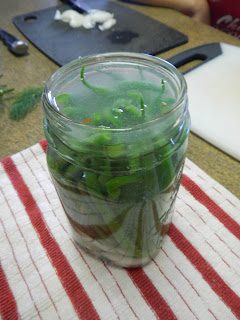 Stick a lid on it, and put it in the fridge for at least 4 days and up to a month or so.  Good luck getting them to last that long.  This isn't shelf-stable, so make sure you keep it in the fridge, but we haven't had any go bad yet (knock on wood!).

After it's had some sitting time, crack it open and enjoy the tart, crunchy deliciousness!  These are great picnic fare, and impress as something to just pull out when you have friends over for dinner and are doing some grilling.  They're a great project for young kitchen helpers, or for when you don't want to spend a lot of time in a hot kitchen.  To me, dilly beans just scream summer.  And I could use as much summer as I can get!