I'm not a huge baker, but I do love a good quick bread or muffin that I can throw together and see results quickly.  I love having something warm from the oven for an afternoon snack for my kids to come in from the cold to.

I also like recipes for getting rid of mushy bananas.  My family tends to go through banana phases, where sometimes I can't buy enough, and then other times, I'll get 5 and 3 of them will go brown.  I hate being wasteful, so I package and freeze the mushy ones for baking, if I'm not ready to bake with them right then.  I have quite a few bags of mushy bananas in my freezer at any given point. 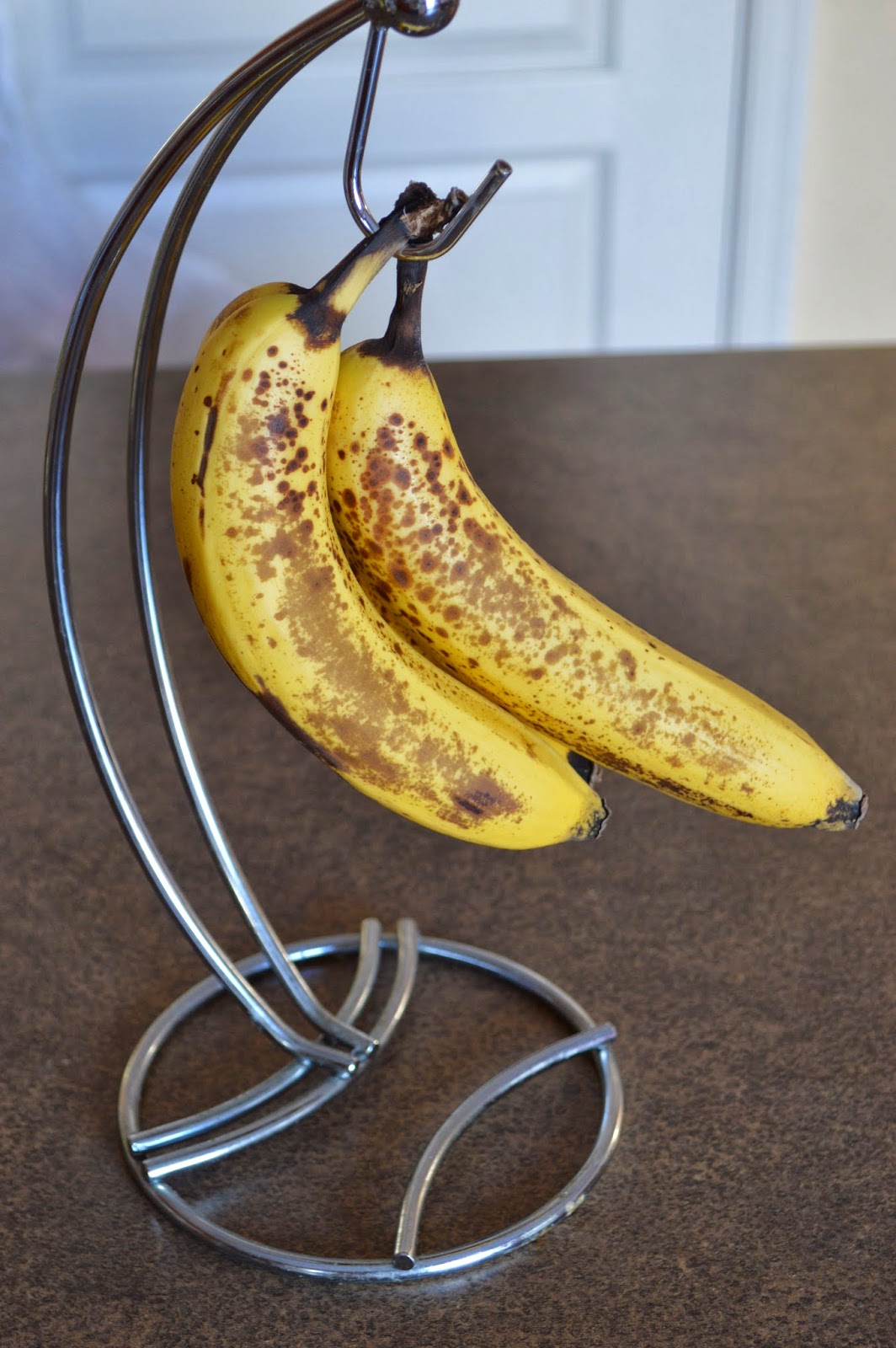 I've been making banana snack cake for a few years, and it's always good.  Then, inspiration hit, and now it's even better.  Because bacon.

So, here's what you do:  To prep, heat your oven to 350, soften 2 sticks of butter, mix a half cup milk with a little white vinegar to make sour milk (or just use 1/2 cup buttermilk, if you have it), and then grease a 9 by 13 pan.  Oh, and cook up about 3 strips of bacon, unless you have leftover bacon around (Ha ha...leftover bacon...like there is such a thing!), until they are crispy.

Take out a mixer.  You can use a stand mixer, and it's probably easier, but mine is stored in the basement and weighs a ton, so I just use my hand mixer for quickies like this.  In a mixing bowl, beat the butter until it is fluffy, then add a cup of sugar.  Beat it more. 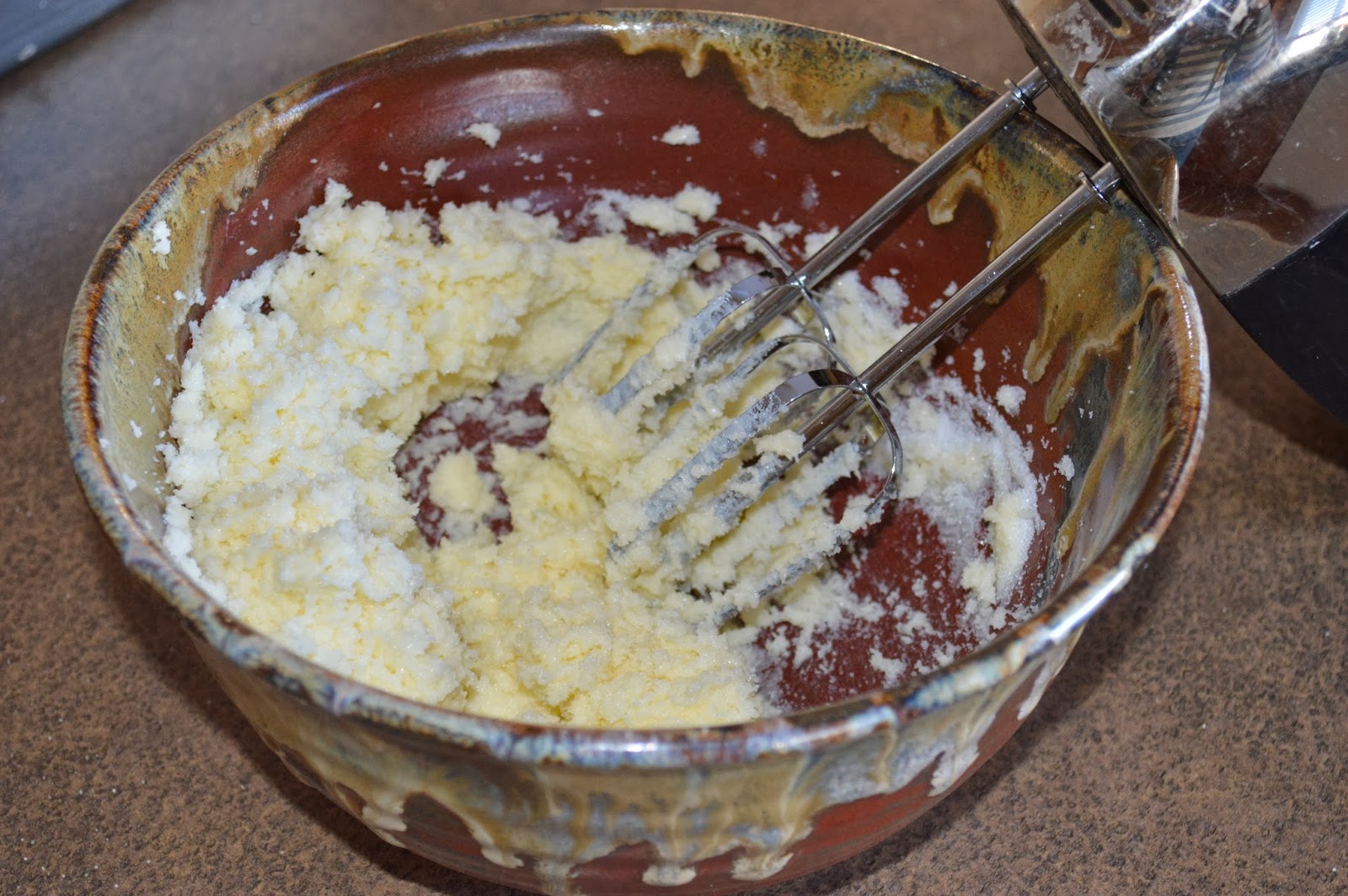 Then add in 2 eggs and some vanilla. 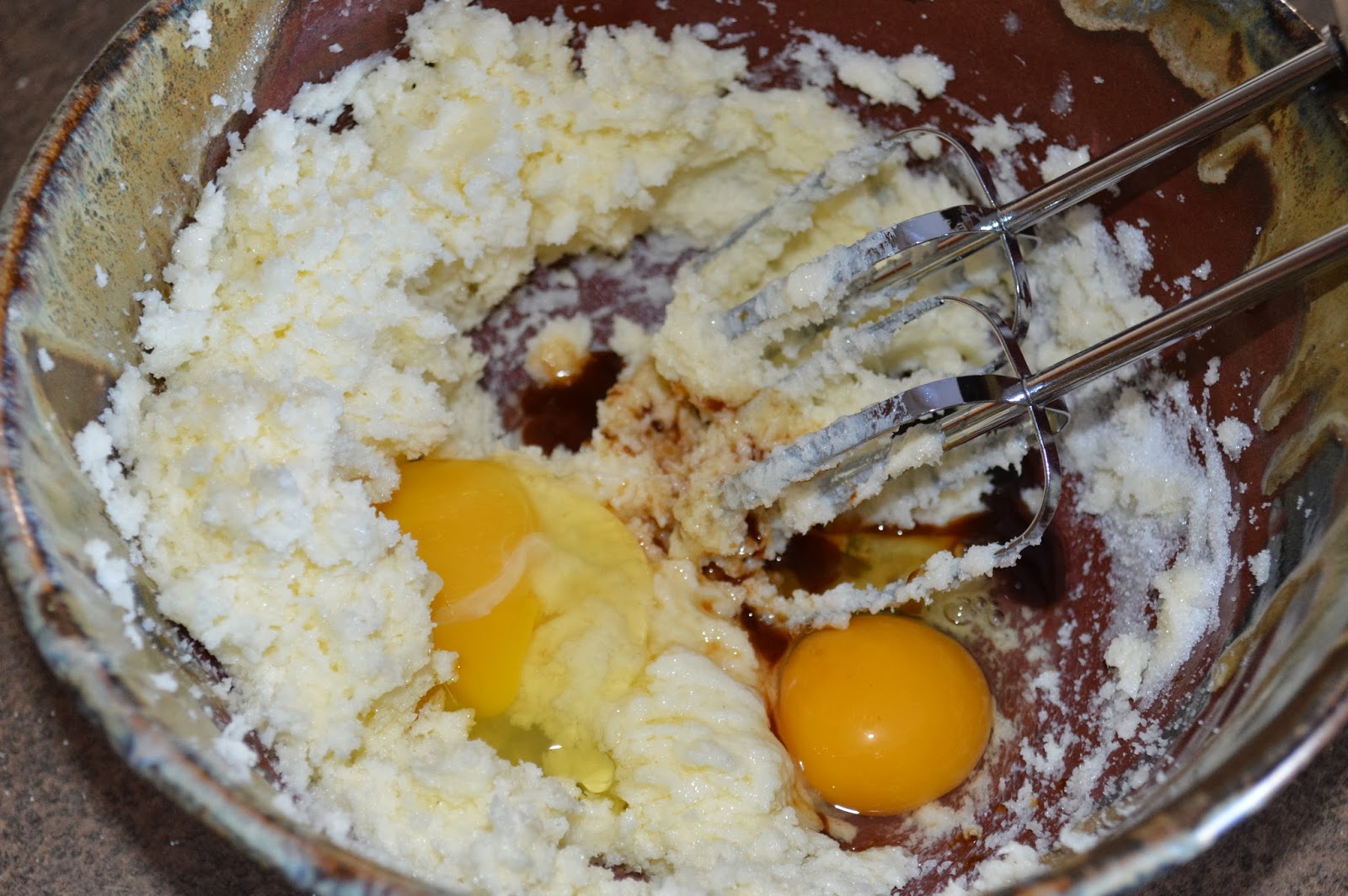 Beat it more.  Add in the buttermilk.  And beat again.  Sing Michael Jackson.  It makes it more fun.  Don't try to do the dance moves with the beaters going.  That makes a mess.  Add in two mushy bananas.  You can mush them up ahead of time, but I do this culinarily incorrect thing where I just squeeze the banana to mash it in the skin, and then it splits on the side, and I just squeeze the mushy banana out into the bowl.  Less to wash that way. 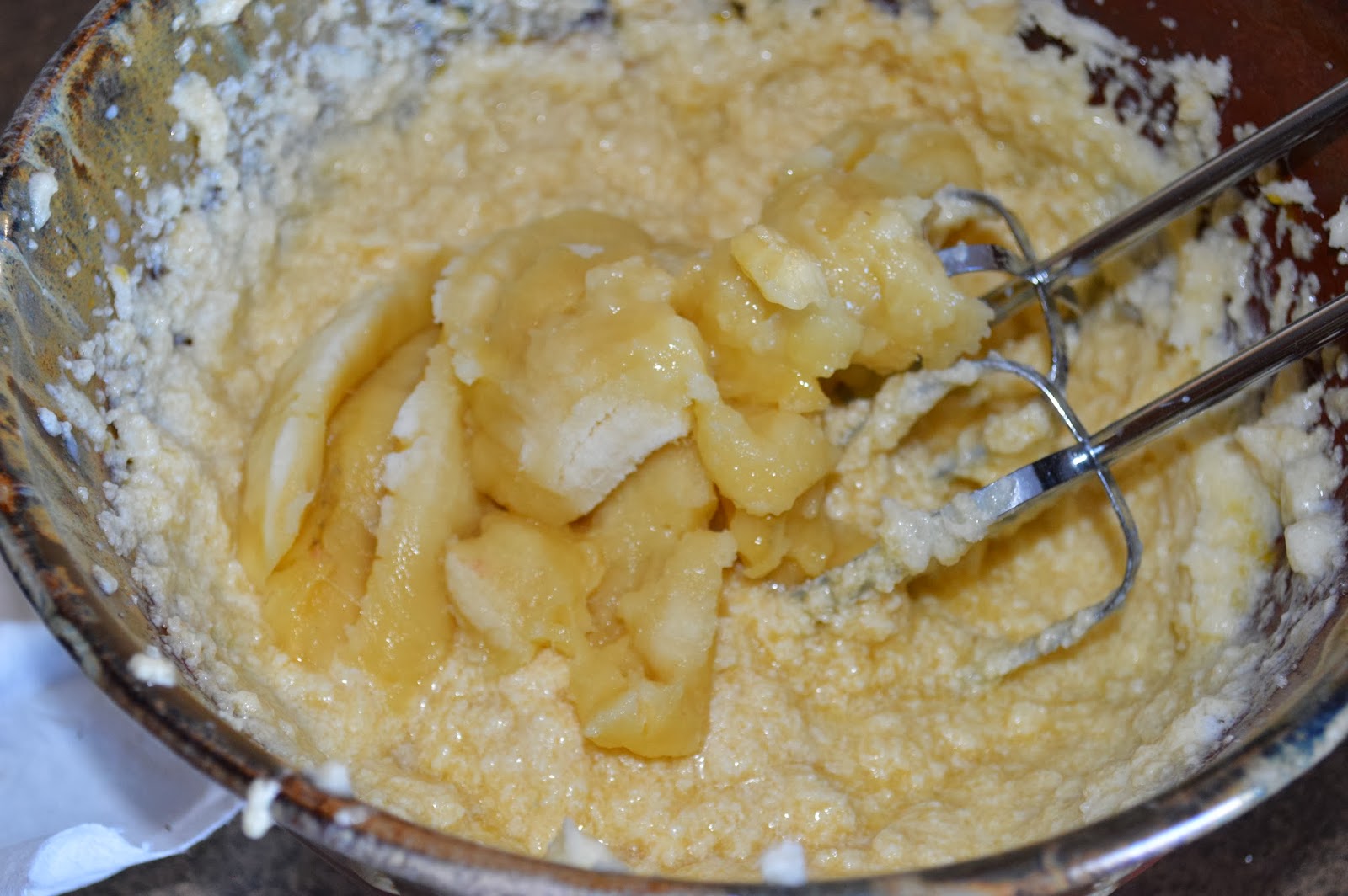 Beat it.  Whip it good.  Dance some more.

Then, add 2 cups flour, 1 cup of rolled oats, 1 1/2 teaspoons baking soda, and 1/2 teaspoon of salt.  Mix that in well.  I usually switch to doing this by hand, so as not to get a cloud of flour dust in the air. 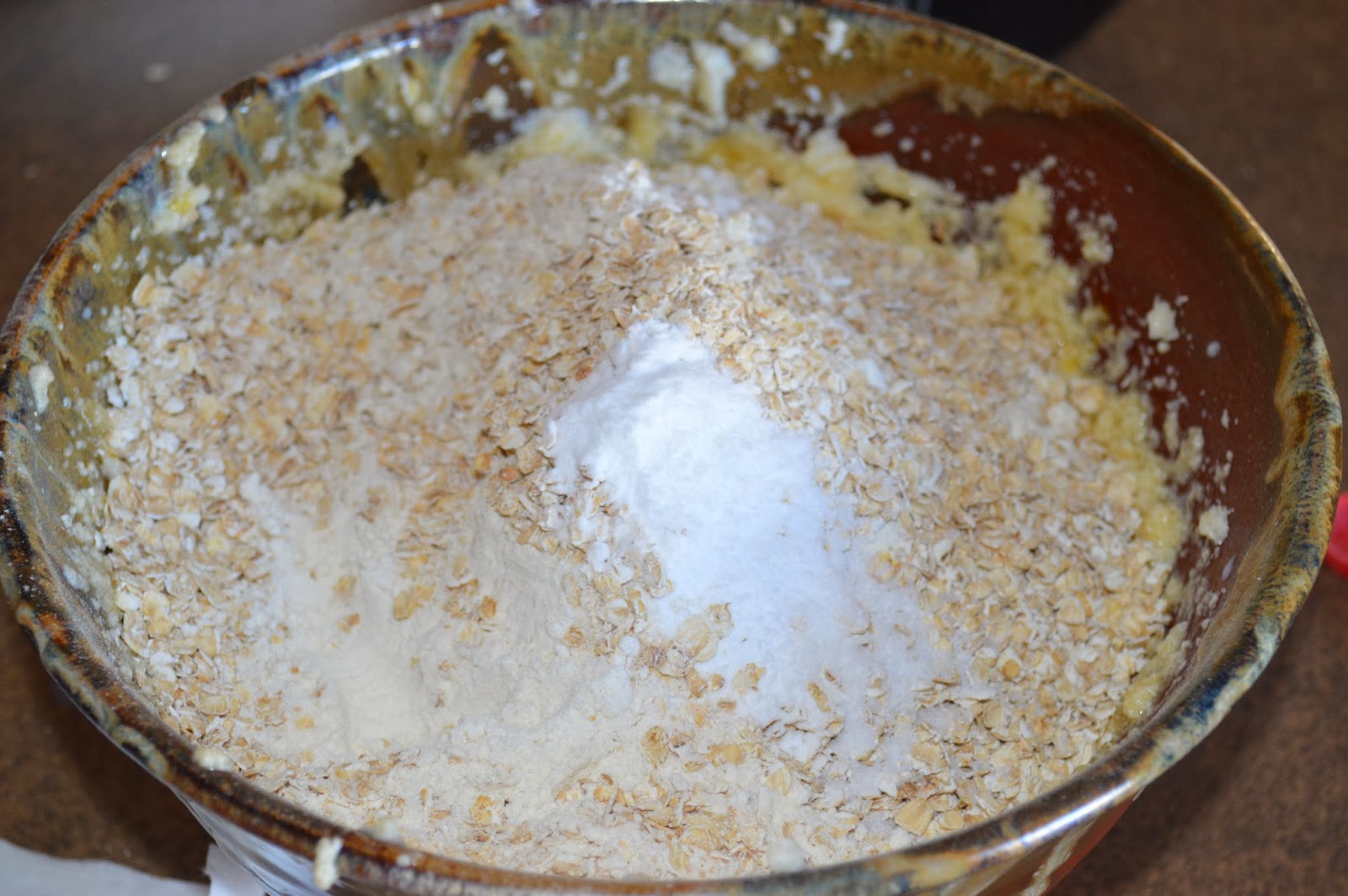 Add mix ins of your choice.  Chocolate chips are the standard at my place, and I opt for the minis, because they spread more flavor with less texture that way.  Today I was clearing out the cabinets and was low on mini chocolate chips, so I also added a partial bag of toffee chips that I had on hand.  You can go with peanut butter chips, cinnamon chips, butterscotch morsels, nuts, whatever floats your boat, but the mix of toffee and chocolate is especially nice in this version... 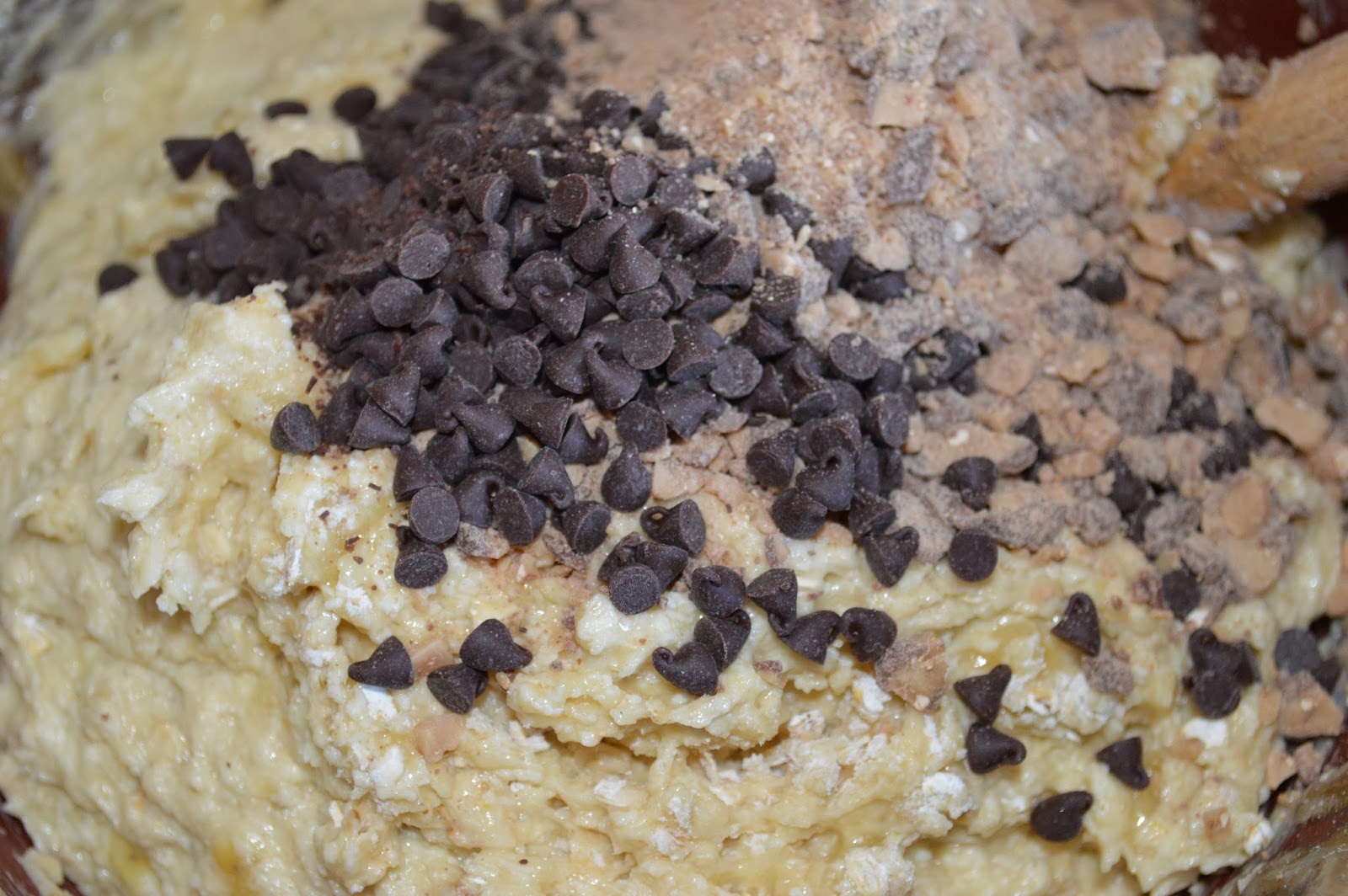 ...Because next you add the bacon, crumbled or chopped small.  The salt and the sweet and the rich and the buttery...droooooooooooool. 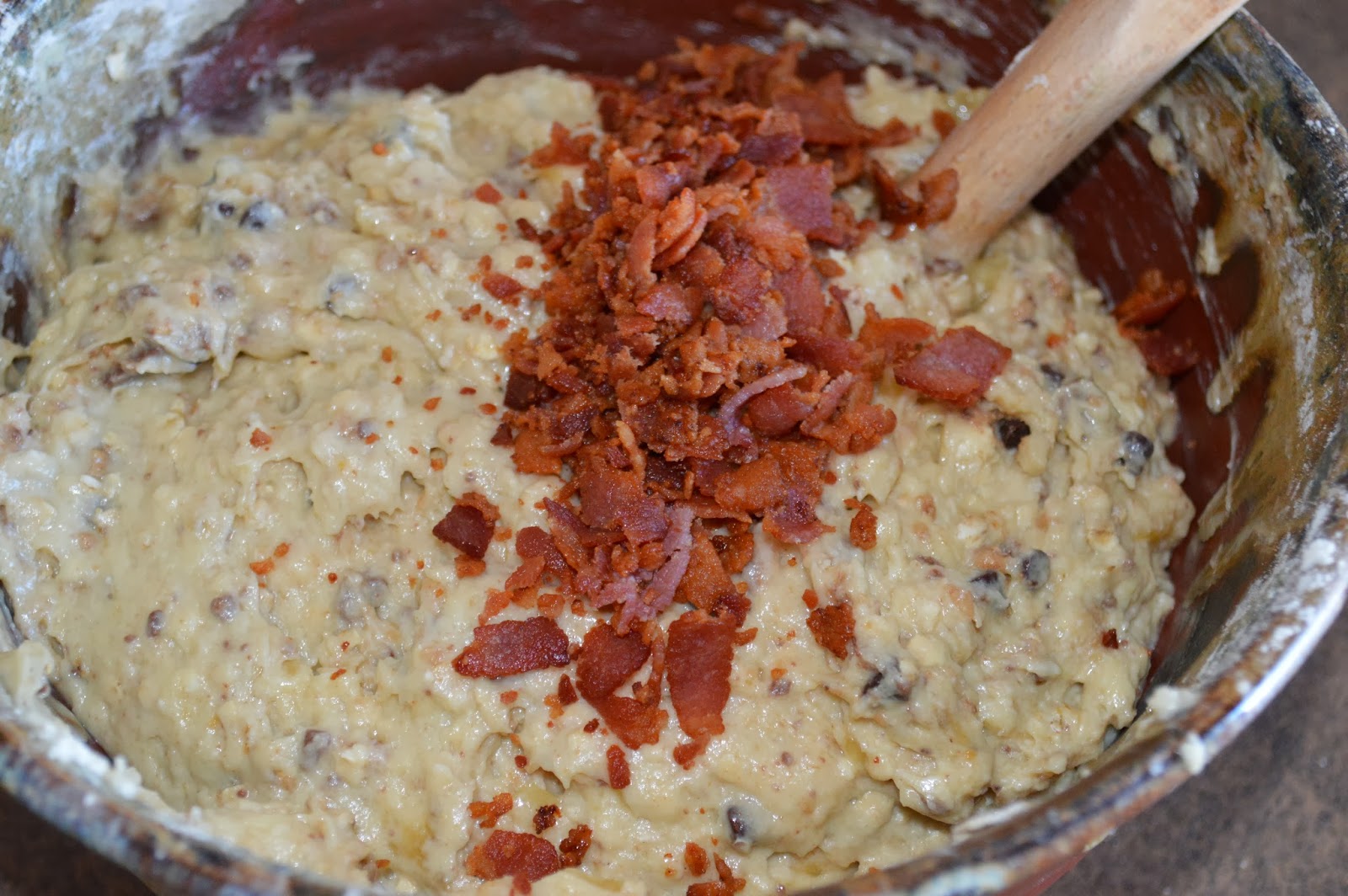 Mix it all well, then spread into the greased 9 by 13 pan. 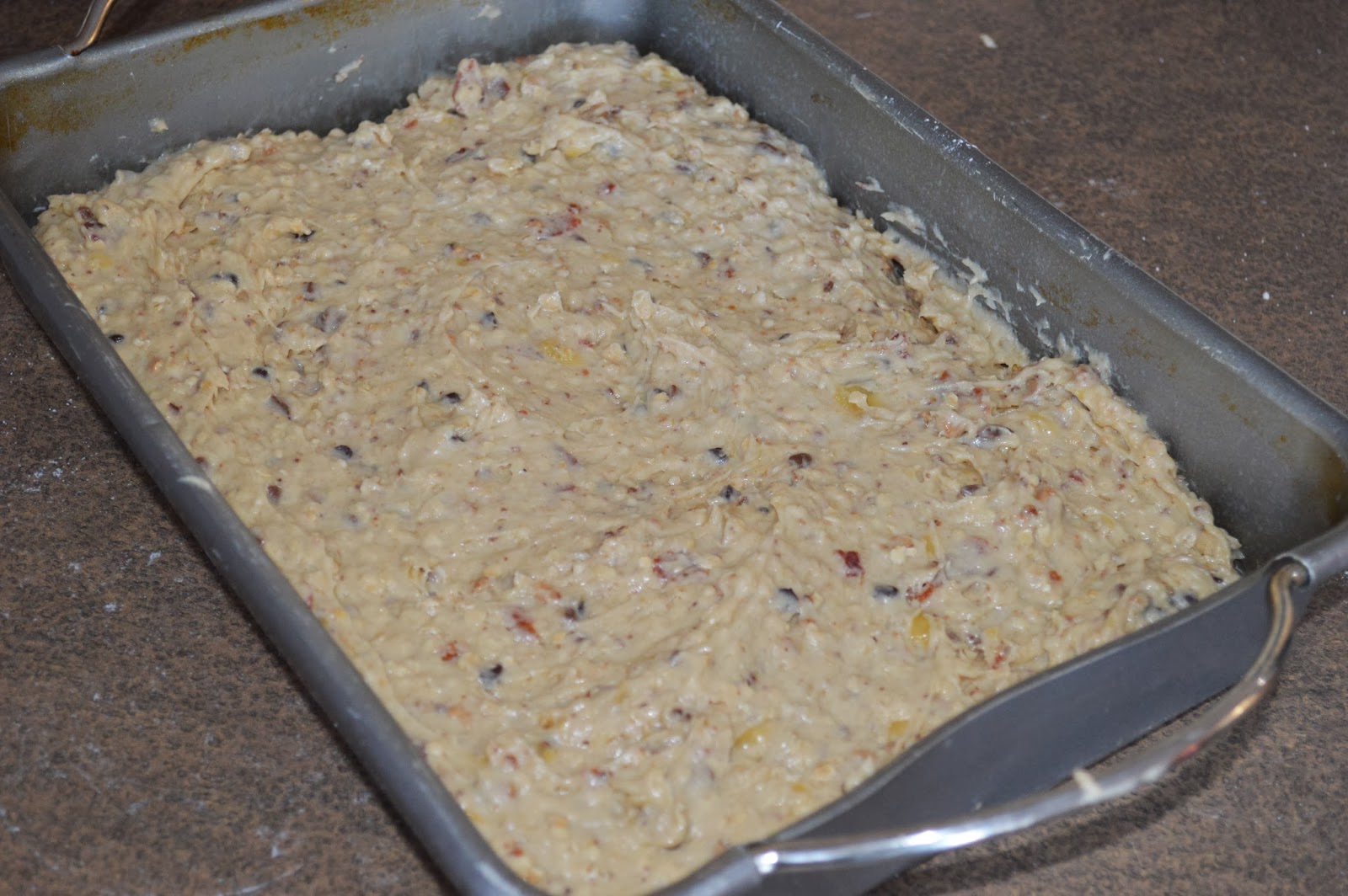 Pop it into the oven at 350 degrees and bake for 30-35 minutes, until it's golden and a toothpick in the center comes out clean. 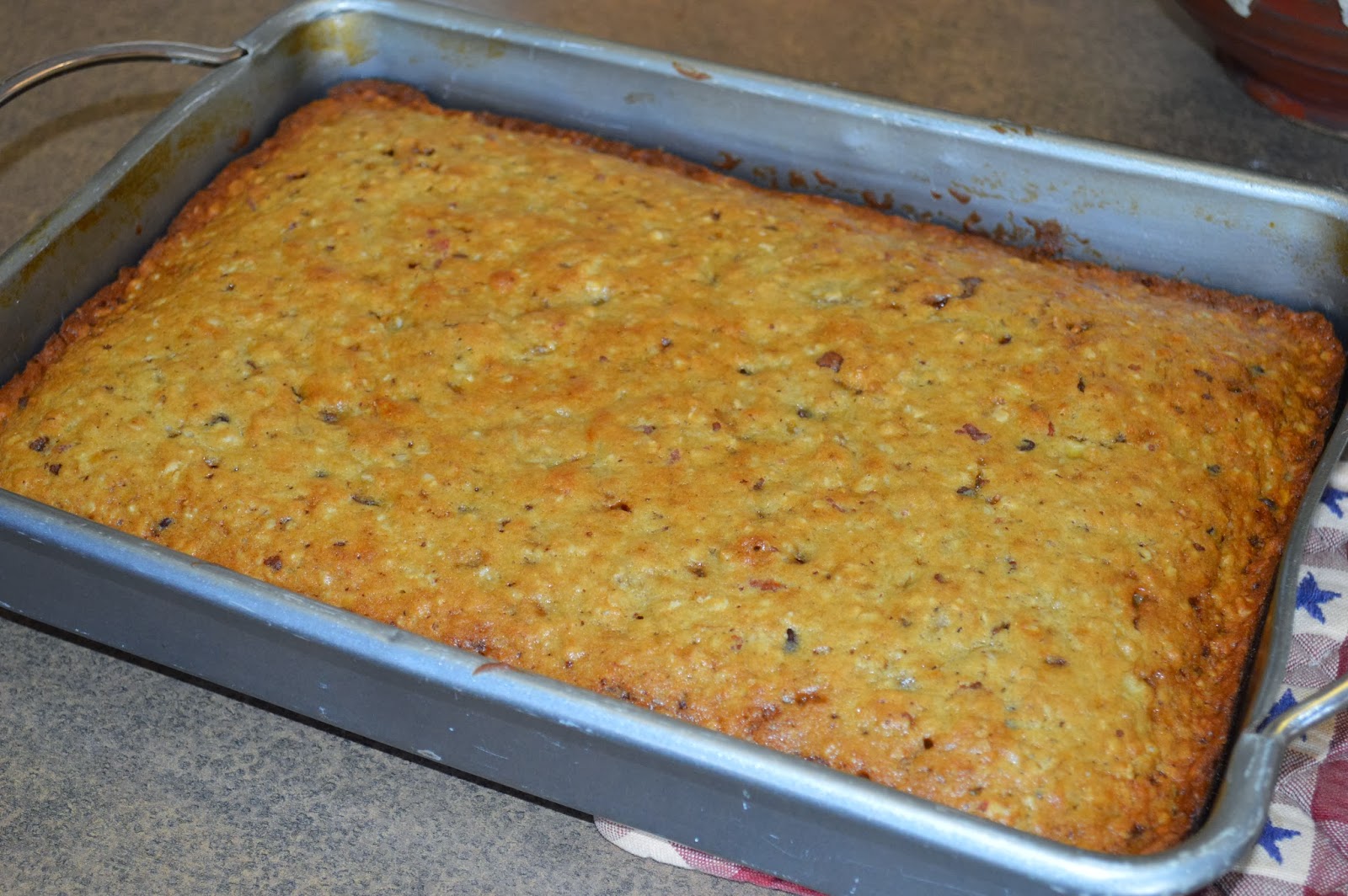 Let it cool for about 10-15 minutes before you cut it ,or it a. will burn your mouth, and b. will not hold its shape as well. 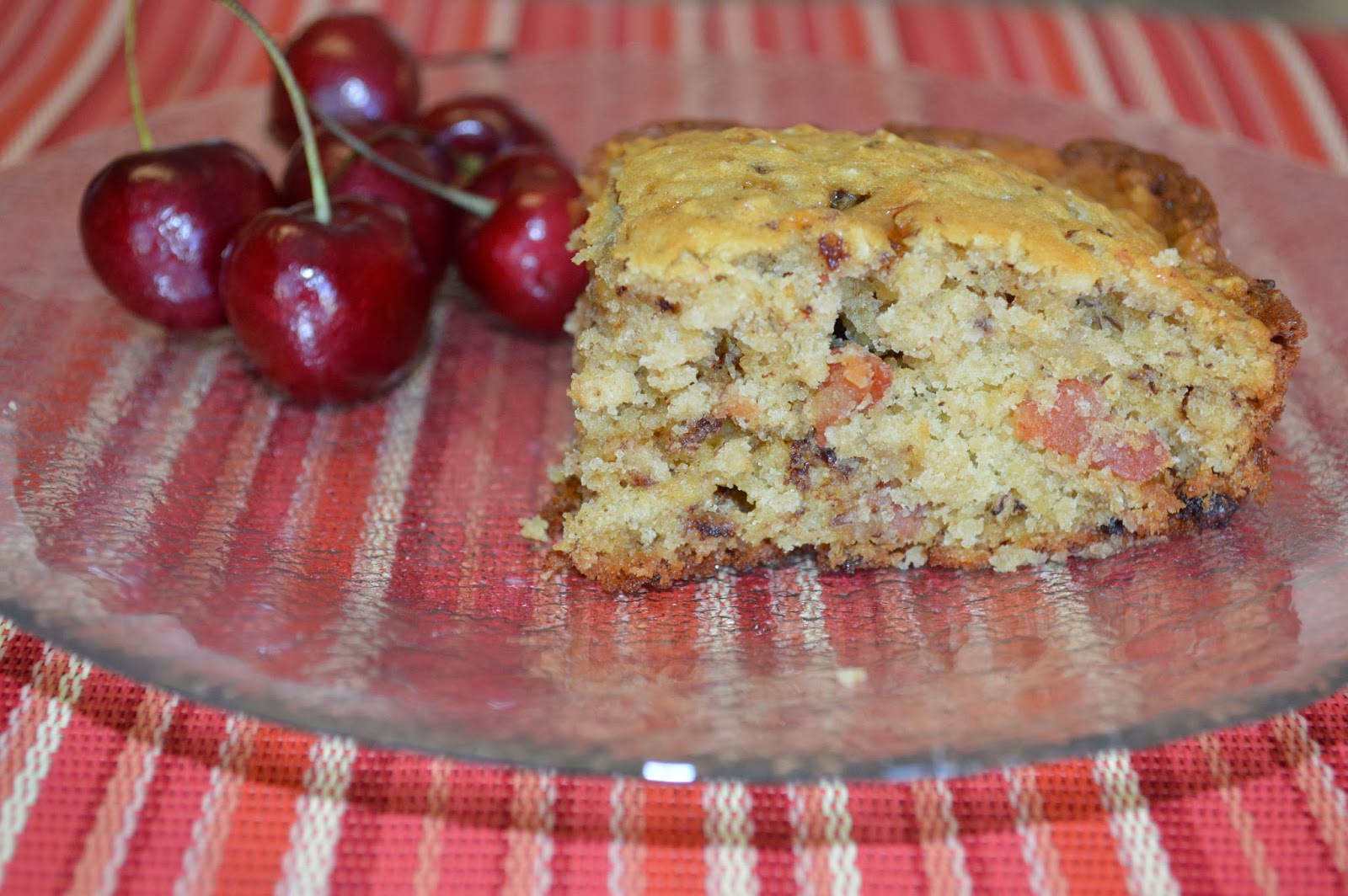 If you're smart, you may want to wrap and freeze half of this for another day in the future.  If you're piggy, like my family tends to be, you'll just snack away at it for the rest of the week.  Probably best to store it in the fridge, what with the bacon and all in it.

I'm going to go out on a limb here and say that this might be a decent breakfast treat as well.  You've got fruit, oatmeal, bacon...and probably not that much more sugar than you would have if you poured maple syrup on pancakes.  Yes, that's it.  It's a snack cake AND a breakfast cake!  Enjoy!