I know I've told you about how I grew up eating things out of boxes and cans before, so I won't bore you with it again.  But one hyphenated word: Rice-a-Roni.  You get it.

I love rice, in general.  So does my family.  If we are out to a nice dinner and I have the option of rice pilaf as a side, you can pretty much bet that that's the direction I'll go.  And honestly, in those cases, it can go either way: a delicious, fluffy, flavorful rice medley or an overdone, colorful but bland scoop of blah on my plate.  And, sometimes, I'm pretty sure that it just came out of a box.

Rice pilaf is a great way to change up your grain side for a nice dinner, and it's amazingly easy to throw together, even without the box.  Seriously, the first time I tried making it, I wanted to punch myself for not doing it on my own sooner.  Plus, making it yourself, you'll know what's in it and save yourself from a lot of sodium.  Also, it's yummy stuff.  Basic, but yummy.

Because my family of 5 likes it, and because I really enjoy rice pilaf leftovers, this recipe is going to make a large batch.  Feel free to cut it in half.

Okay, so to prep, grab a small handful of a thin pasta, like thin spaghetti, angel hair, or vermicelli.  You're going to break it into small pieces.  When it comes to breaking up pasta for various recipes, people have all kids of methods that they recommend.  Some people (Martha Stewart) tell you to clip it with scissors.  Some people (Rachel Ray) just have you snap in in small pieces with your hands, little by little.  My newest favorite way is from Jamie Oliver (who I happen to have a massive crush on at any given moment).  You need a tea towel (not a fluffy towel, because the pasta will get stuck in the fluff).  Place the pasta in the middle of the towel, lengthwise with the towel.  Fold the sides over it to make sort of a tube with the pasta in the middle, then grab each end and hold them shut.  Drag the towel over the corner of a counter or table, pulling down on one side while holding the other side flat to the surface, and it should crack the pasta as you drag it.  Then, carefully shake the broken pasta pieces into a bowl. 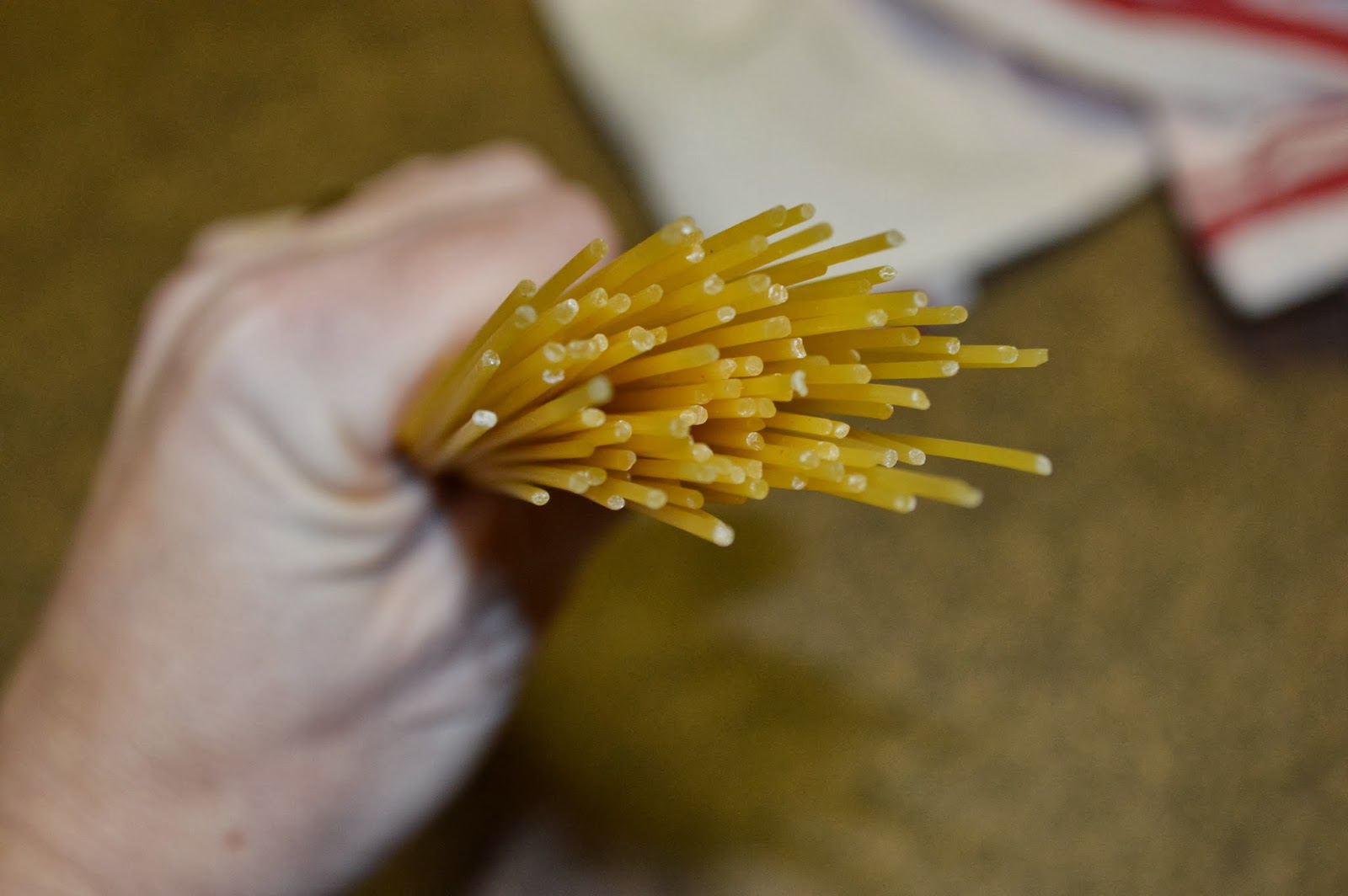 Want to make it even easier?  Use orzo.  Or stellini, if you feel like dining on tiny stars.  Or, maybe you have a preschooler, and you want to go with the tiny alphabet pasta for educational reasons.  Whatever you go with, you probably want to end up with about a half cup of it. 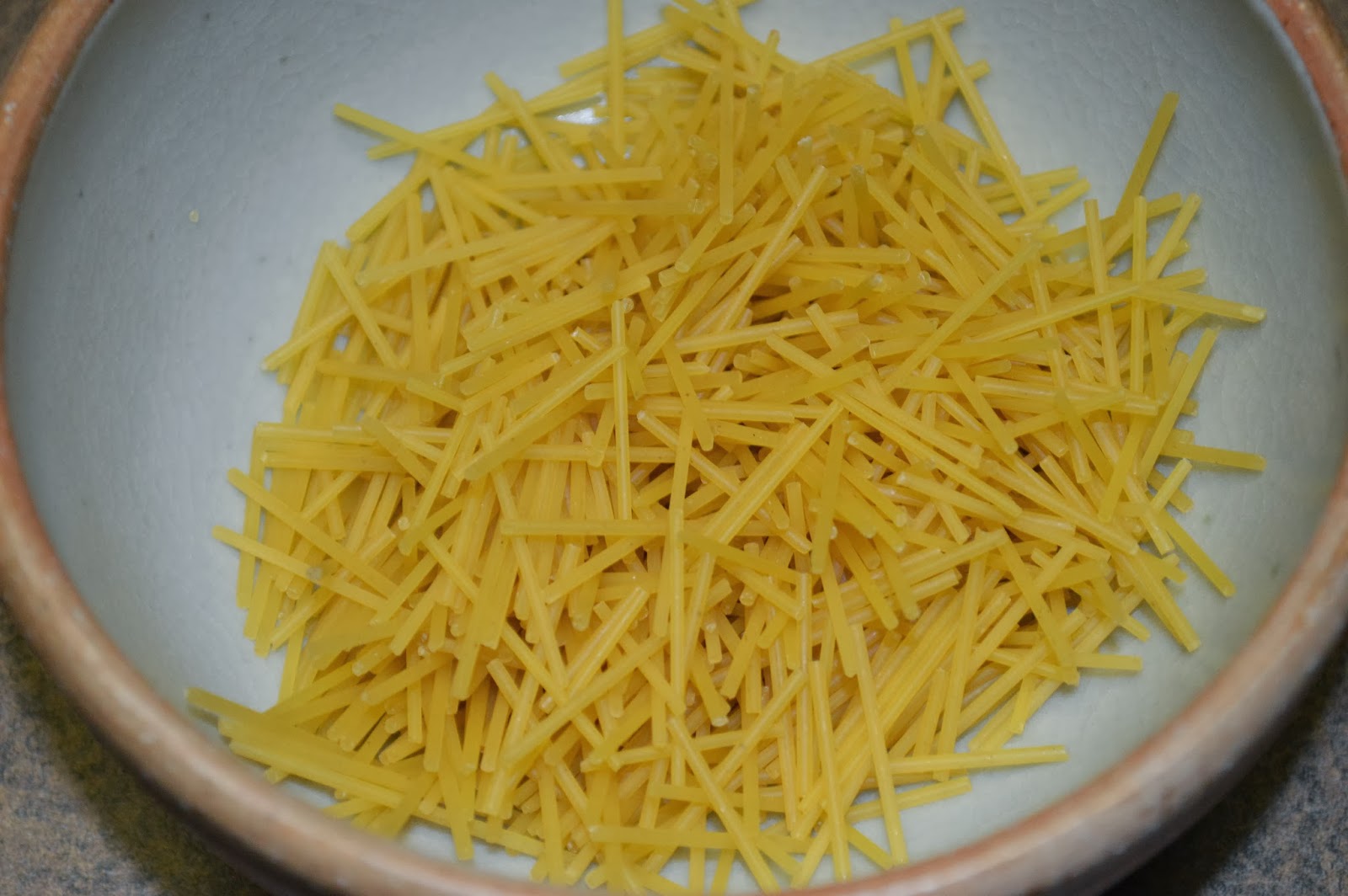 Next up in the prep, chop an onion into a fine dice. 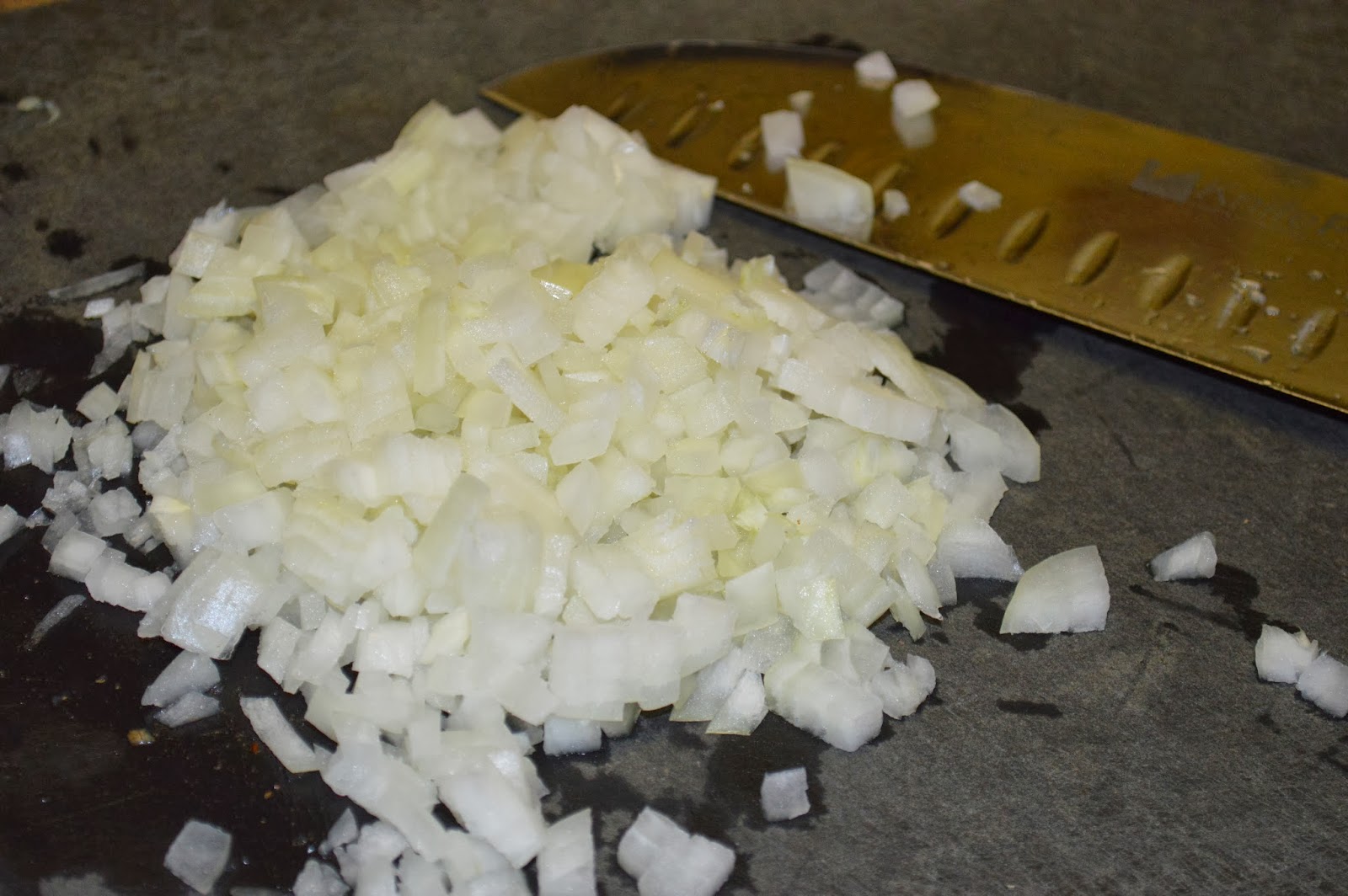 Heat a decent amount of olive oil in a large pan that has a lid.  Add the onions with some salt and pepper to season, and cook until they start to get a little tan.

Add in the pasta and 1 1/3 cups white rice, plus another tablespoon or so of olive oil, and cook, stirring, until the pasta starts to toast and brown.  It should have a nice, nutty scent to it. 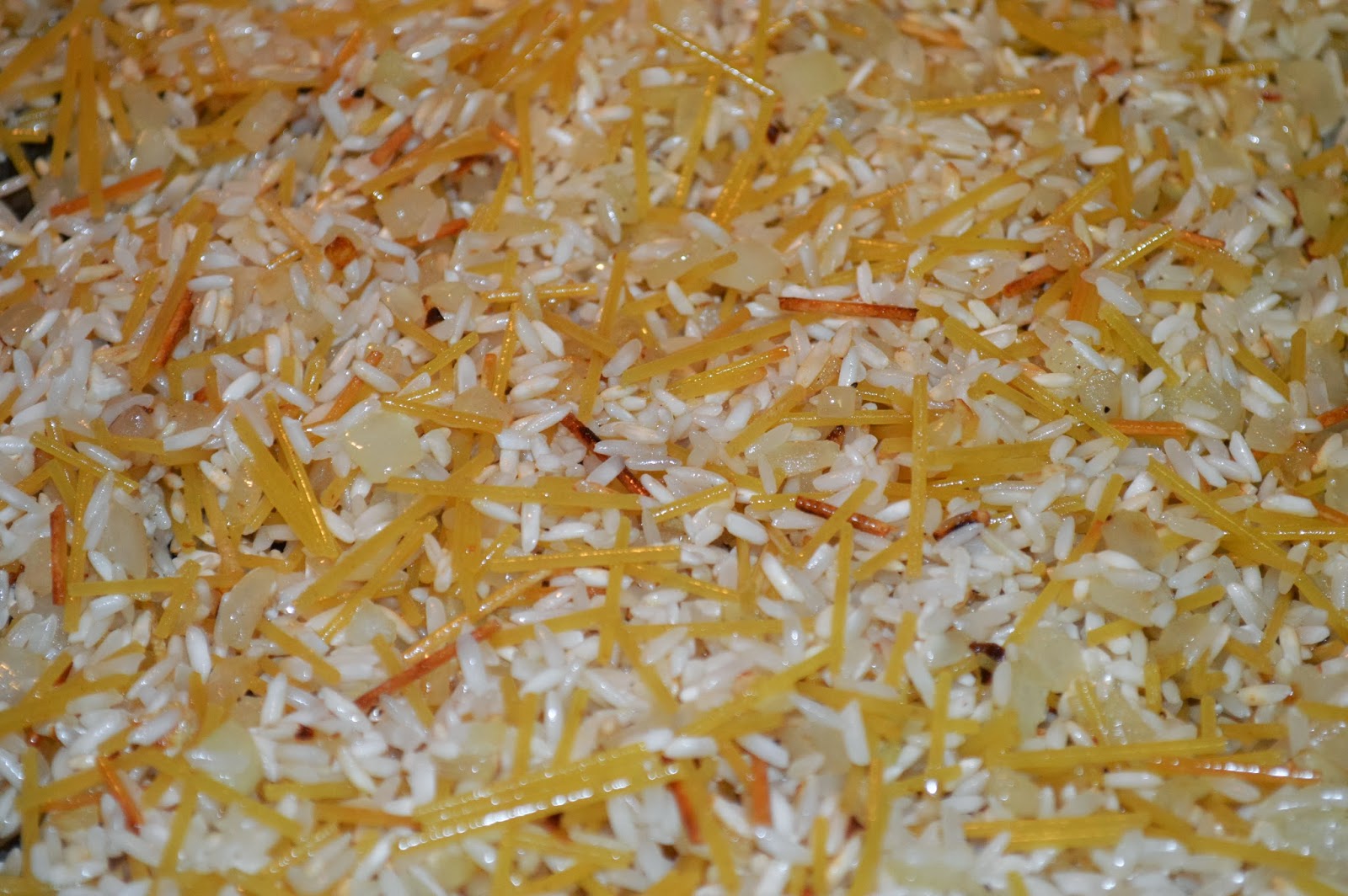 Add 3 1/2 cups chicken broth, or broth of your choice, and hit it with the salt and pepper again to season it.  Bring it to a boil, then cover and simmer for 15 minutes.  Give it a stir to fluff it, and check the consistency.  If there's extra liquid, cover it back up and simmer a couple more minutes. 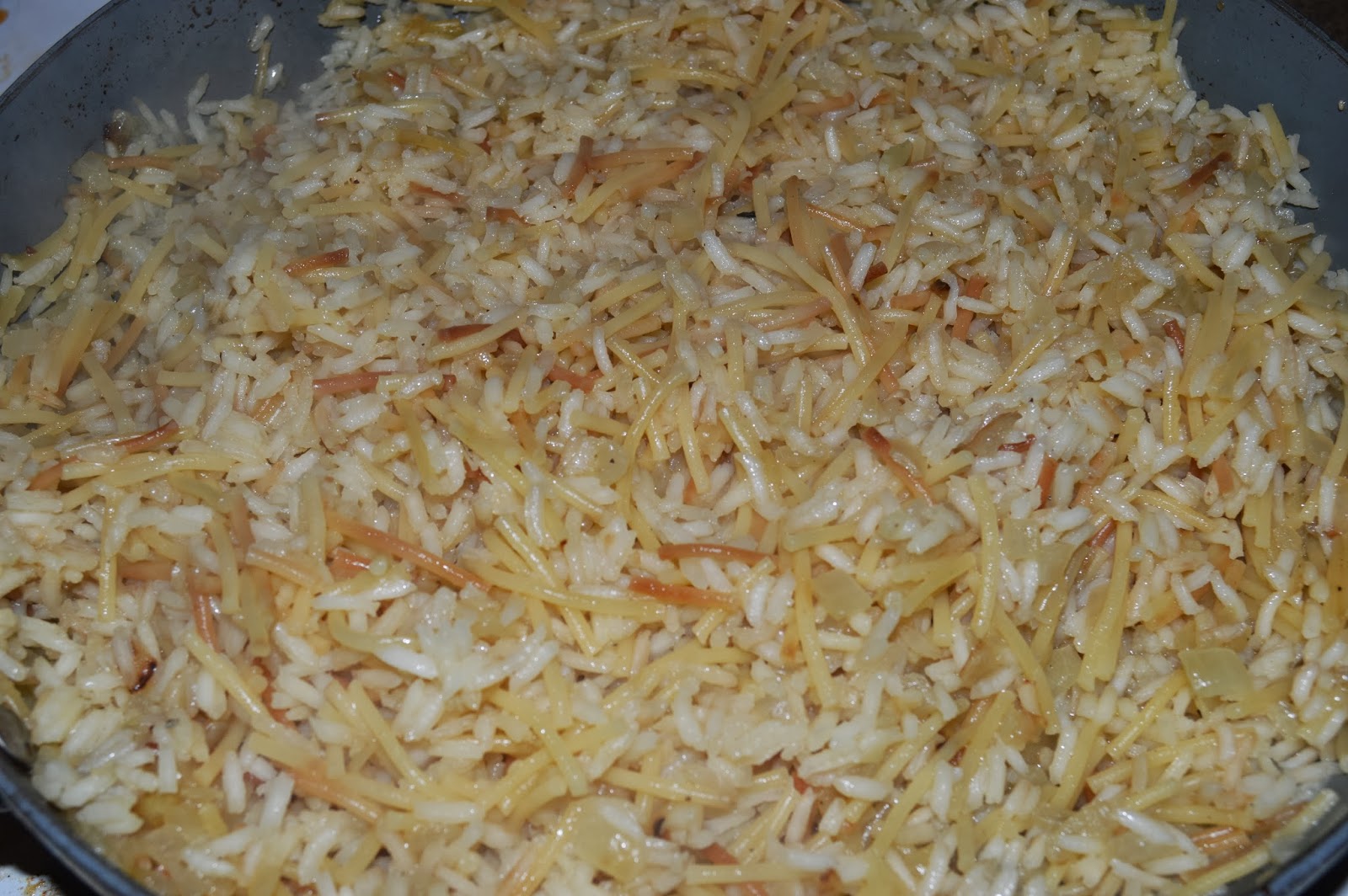 Check for seasoning again, and serve.  You can fancy it up with a little chopped parsley at the end, if you want.  I'm a big fan of a touch of sour, so I like to squeeze some fresh lemon into it.  It works with chicken, fish, beef, pork...pretty much across the board. 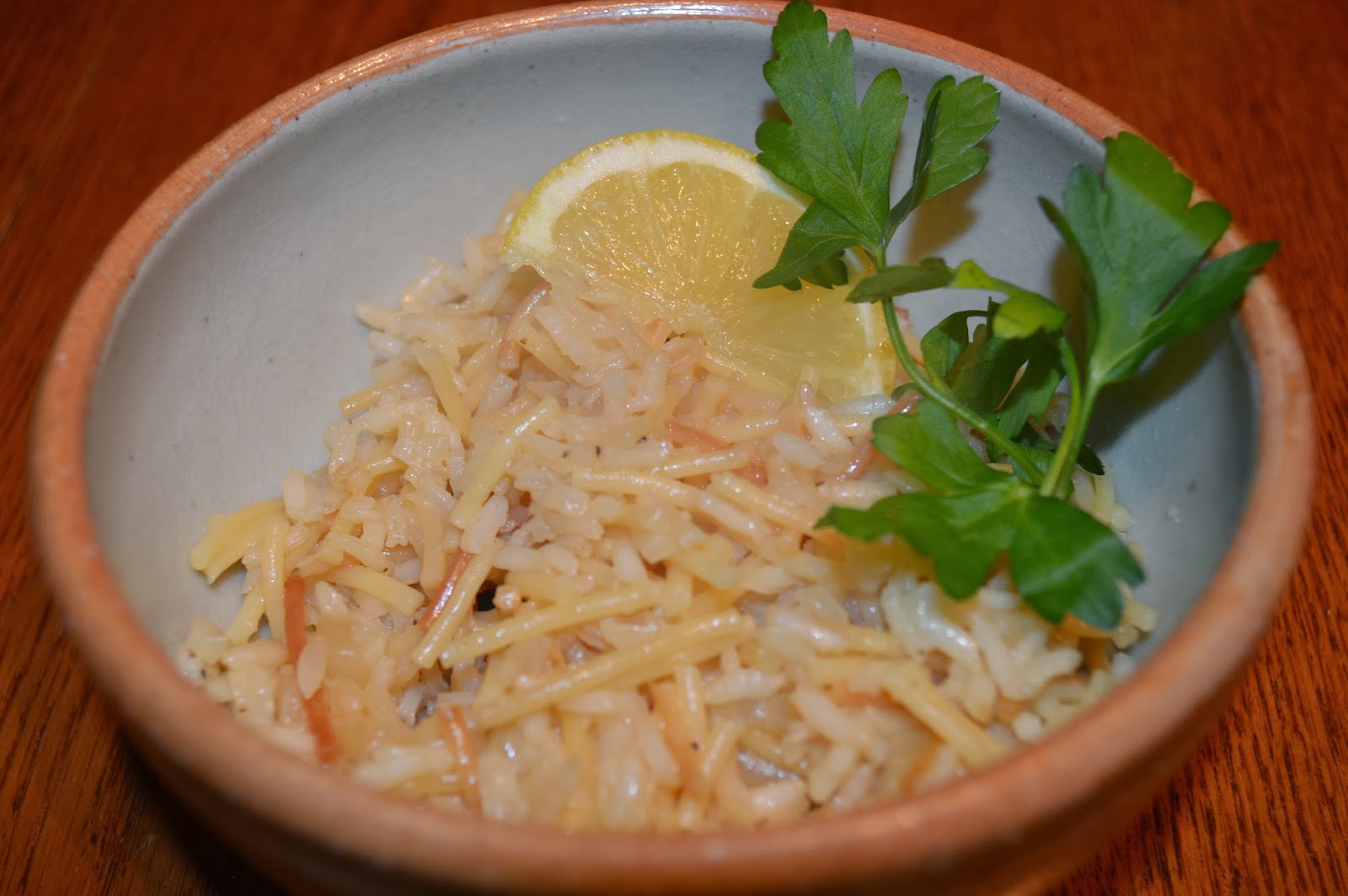 So, one main dish that I remember my mom making with the boxed stuff is pretty easy to translate to this recipe, and I do so when I want a quick mix of nourishment and nostalgia for my lunch.  When you add in the broth, add in a drained can of tuna, then chop up a stalk or two of celery and add that in when you have about 5 minutes left to simmer.  Hit it with lemon at the end.  No idea what it's called, but I'm open to suggestions.