Some people love shopping for clothing, and can spend hours staring at shoes and purses.  Me?  I'm like that shopping for food.  I'm pretty much a perimeter shopper at the grocery store, but if you find me in an aisle, it's probably the international foods aisle, searching for inspiration.  Red lentils are in that aisle, and they always catch my eye with their fiery orange color.  They are quick to cook, and easy to use in soups.  But, in a surprising twist, they also can make a delicious, velvety pasta sauce.

This recipe is meatless, and can easily be vegan, if you use vegetable broth.  It's hearty and satisfying, and most likely different than any pasta sauce you've tried.  If you wanted to meat it up a bit, it would go well with either chicken or maybe Italian sausage either cooked into it or on the side.

So, first, chop up an onion and a few cloves of garlic.  Saute them in a medium to large pot with a little olive oil.  Measure out 3/4 cup of red lentils.  Take a cup each of water and broth.  I used chicken, but vegetable broth works well too, and like I said before, keeps it vegan.  Combine that all in the pot and bring it to a boil.  You might want to add in some spice, if you'd like.  Red pepper flakes are good with this, but this time I went a little crazy and used curry powder for the heat.  As each member of my family walked in the door when I was cooking this, every single one of them asked, "What smells so good?".  Love it!

Once it's at a boil, cover it with a lid and reduce the heat to simmer.  Cook 20 minutes, or until the lentils start to mush up as soon as you stir them.  Just a warning, if you haven't worked with red lentils before: they don't keep that gorgeous glowing color.  Sadly, they fade away to more of a yellowish pea-soup type color.  Don't worry...they still taste yummy. 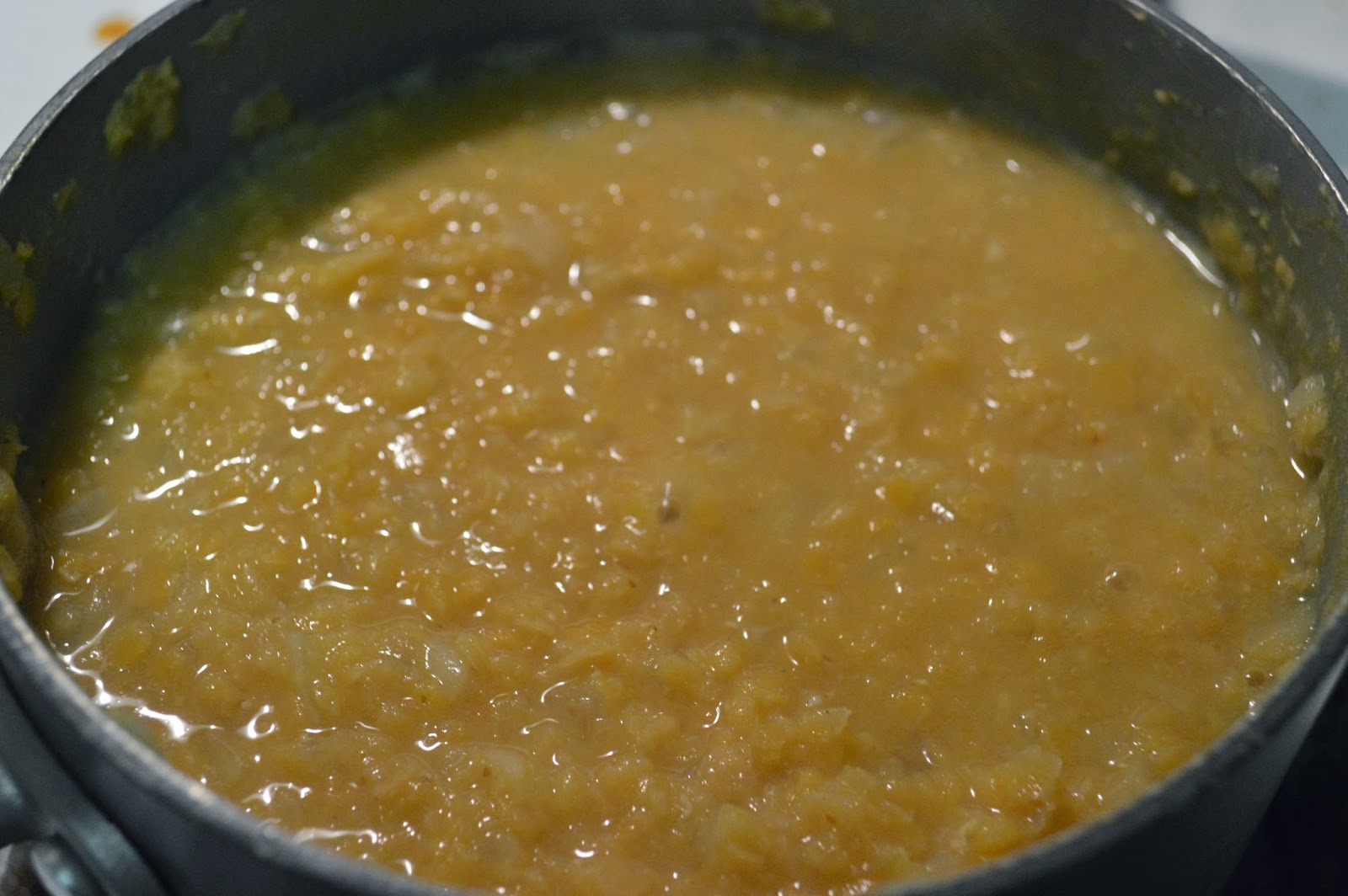 While the sauce is simmering, boil up a large pot of water and cook up some pasta.  I like this with long, flat pasta, like a fettuccine or a linguine.  Cook according to the package directions.

Grab some lemons (or lemon juice, more specifically), some artichoke hearts, and some spinach. 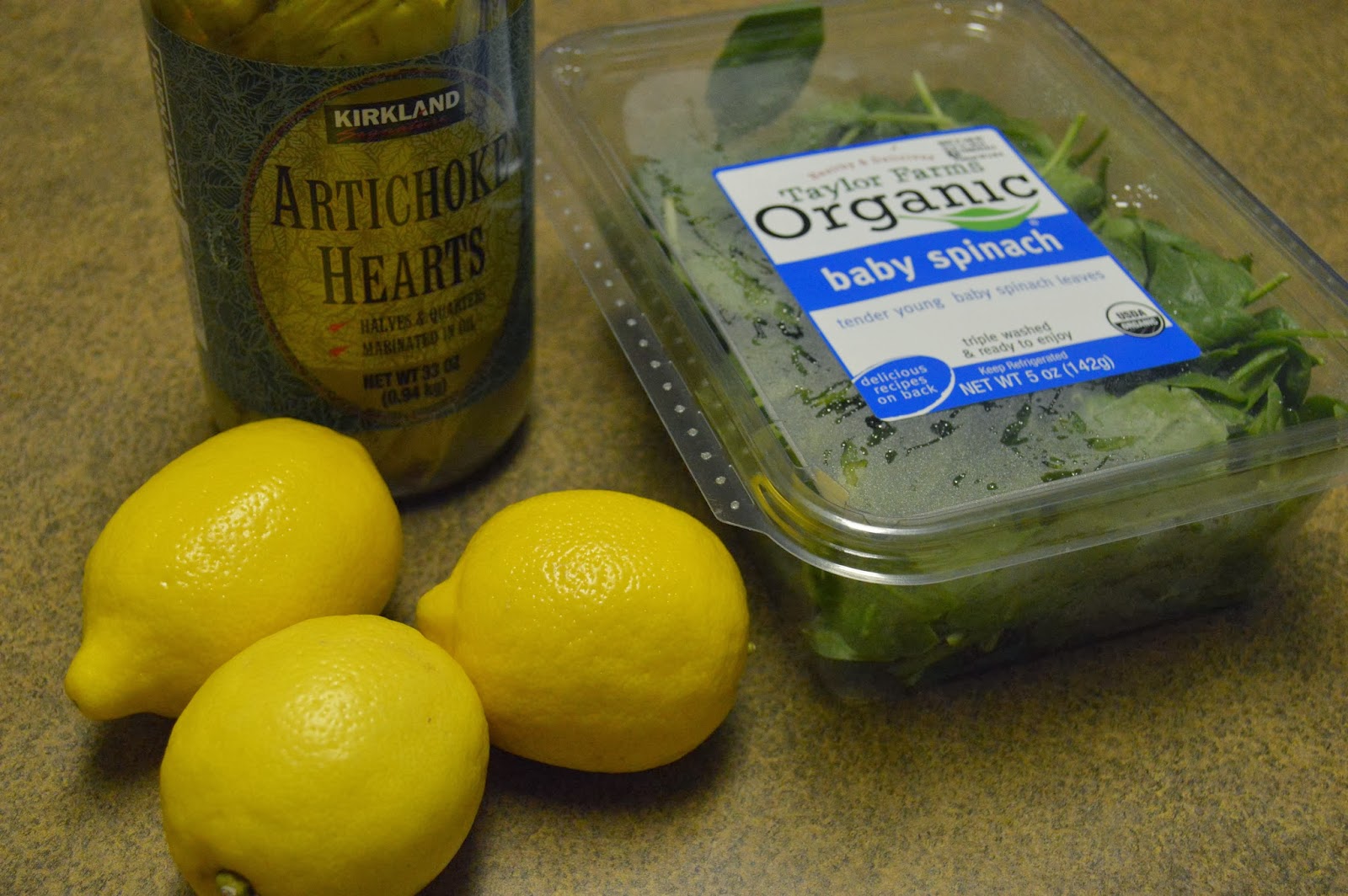 Once the sauce has simmered to tenderness, add in the juice of 2-3 lemons, some quartered artichokes hearts, and several big handfuls of spinach.  If you're using baby spinach, it can go right in, but grown-up spinach will need some chopping to make it easier to eat.  With the artichoke hearts, if they are marinated, you can either give them a quick rinse, or put them in as is, but know that the marinade flavor will come through.  I didn't give my hearts a rinse this time, and I kind of wished I had, because they had just a touch too much tart bite when I got to them in the sauce.

Mix the sauce well with everything in it, taste and adjust the seasonings, toss with the pasta and serve. 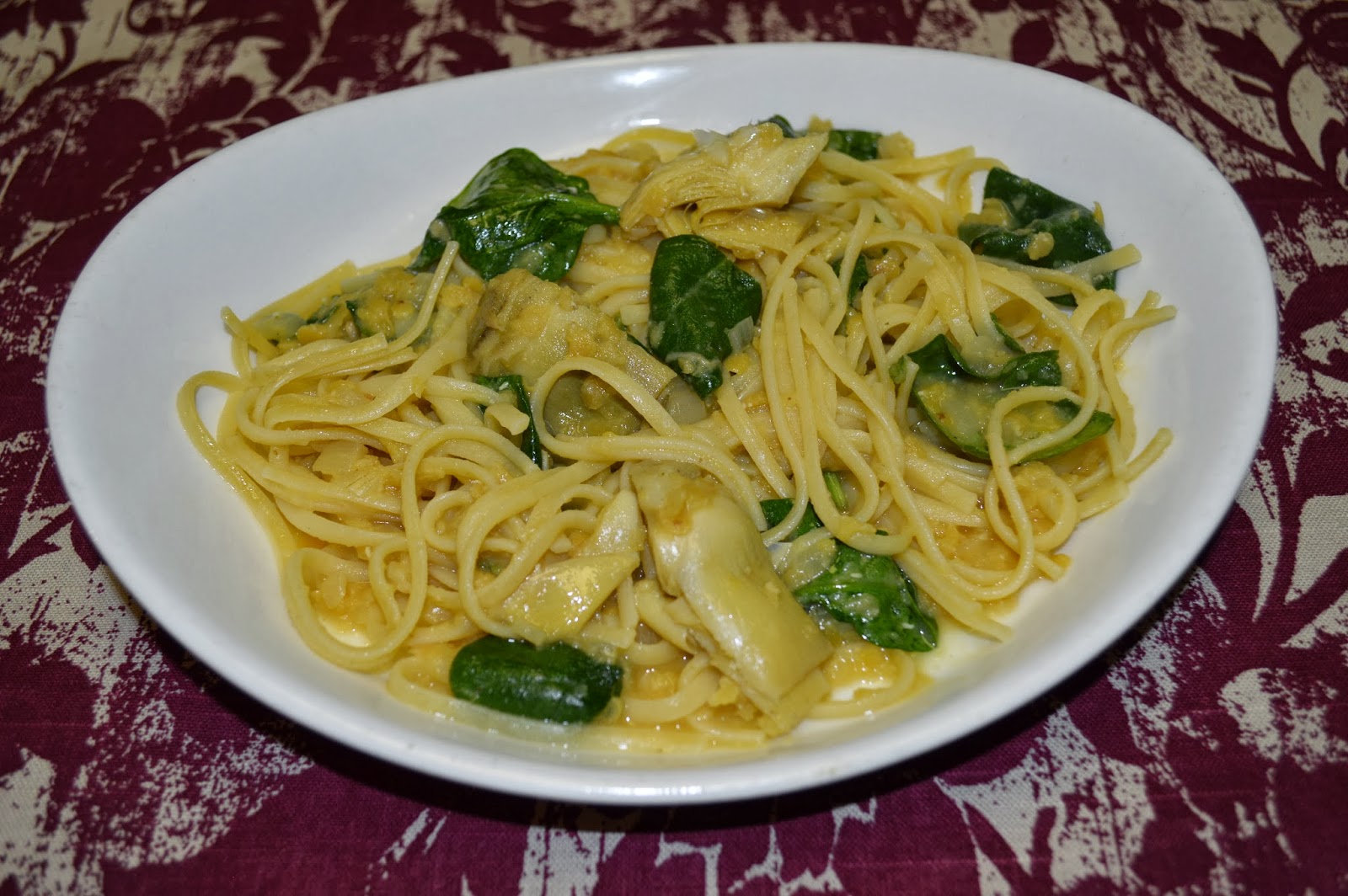 If you save some of the sauce to the side, or have some leftover otherwise, you can make a great soup with it just by adding more broth and bringing it to a simmer.

This is one of those "love it or hate it" kind of recipes.  For me, it is strangely addictive, and I have my feet firmly planted in the "love it" category.  The texture is probably the biggest obstacle, but even though I'm typically sensitive to weird textures (I hate "squeaky" foods!), it doesn't phase me here.  Also, please play around with the seasonings to your taste.  Legumes are pretty bland, which can stink if you don't season them, but can be a nice blank canvas for flavors if you work with them right.  As far as the kids go, of course the little picky one wasn't getting near it, but my middle child gobbled it down, and my oldest liked the sauce on it's own.
Posted by Krasimom at 10:20 PM