Pssssssst...did you know that it's rhubarb season?

I may have mentioned that before.  Like when I made Meyer lemon rhubarb marmalade.  Or rosemary rhubarb jelly.  Or rhubarb compote with Pimms.

And, if you've been following along, you know that it's also time for sorrel.  Like in these sorrel cardamom muffins.

Rhubarb and sorrel don't scream for each other, in my mind.  But, fortunately, someone was bonkers enough to try them together.  In a crisp.  A delicious, tart and sweet crisp.  I found the recipe in the Simply in Season cookbook, a gem that I picked up at an event through our CSA.  It's a great book for eating seasonally, and it definitely thinks outside the box with many of its recipes.  Actually, if you're looking to eat healthier, or more local, or more seasonally, I would highly suggest looking for a seasonal cookbook of any sort.  They tend to be about making the most out of each item for what it is, and the recipes are often simple with fantastic flavors. 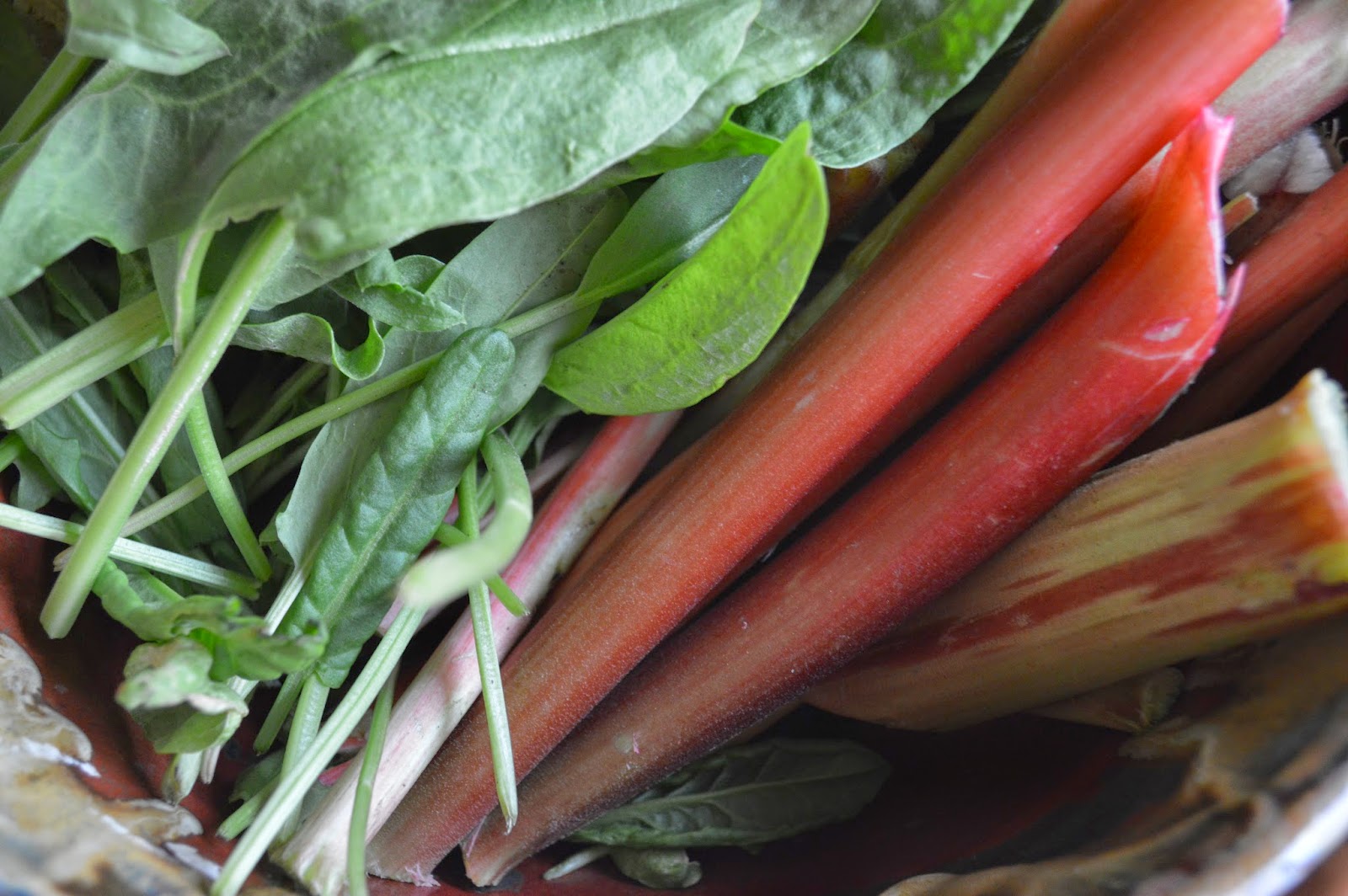 So, rhubarb and sorrel.  Both come in early spring.  Both are tart, in their own way.  And, most importantly, but are currently going nuts in my garden.  I had to try it. 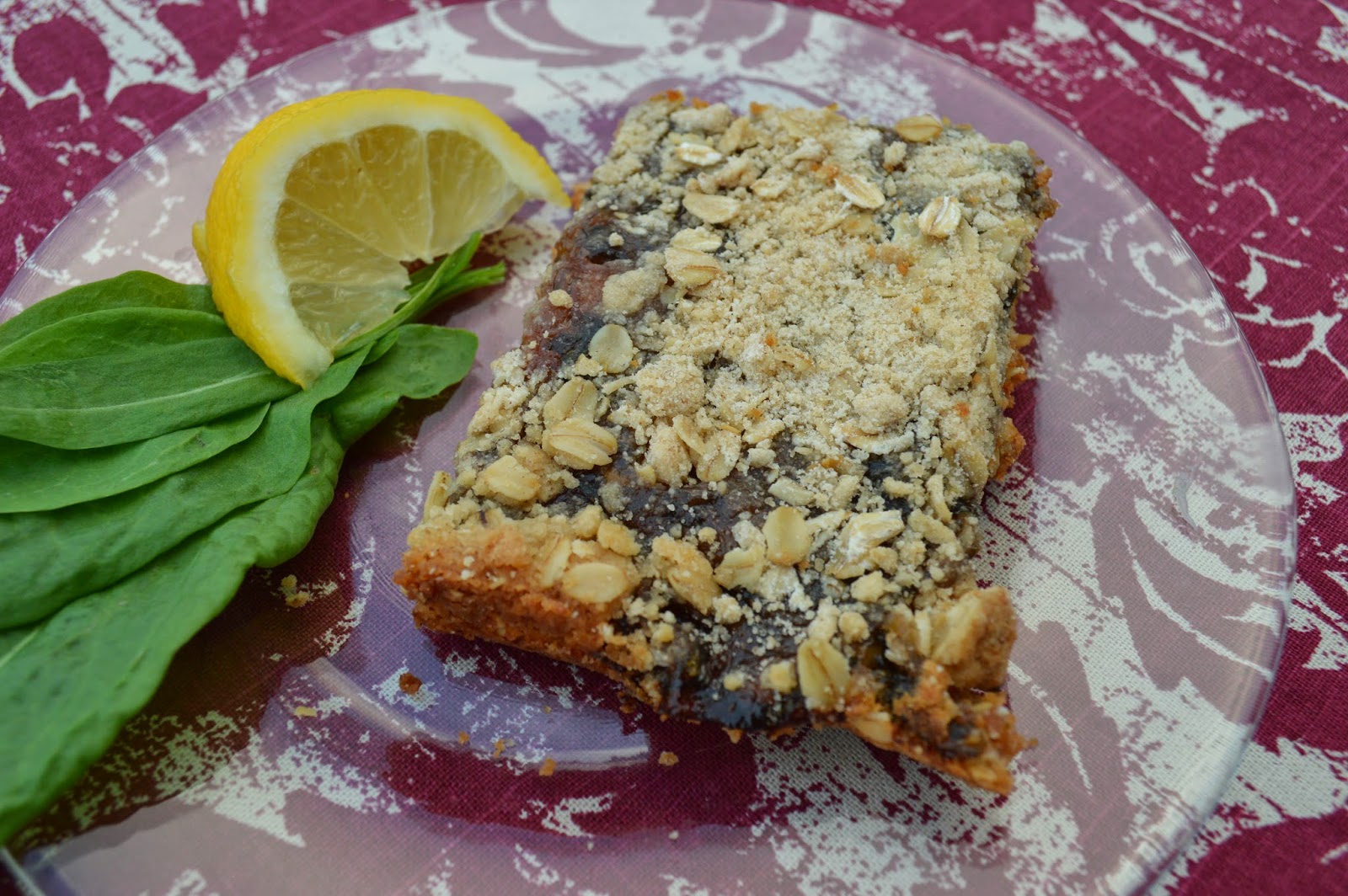 Grab a bunch of rhubarb and a bunch of sorrel.  If you don't have sorrel, the cookbook says to sub in strawberries.  Ending up with a delicious strawberry rhubarb crisp is far from the end of the world. 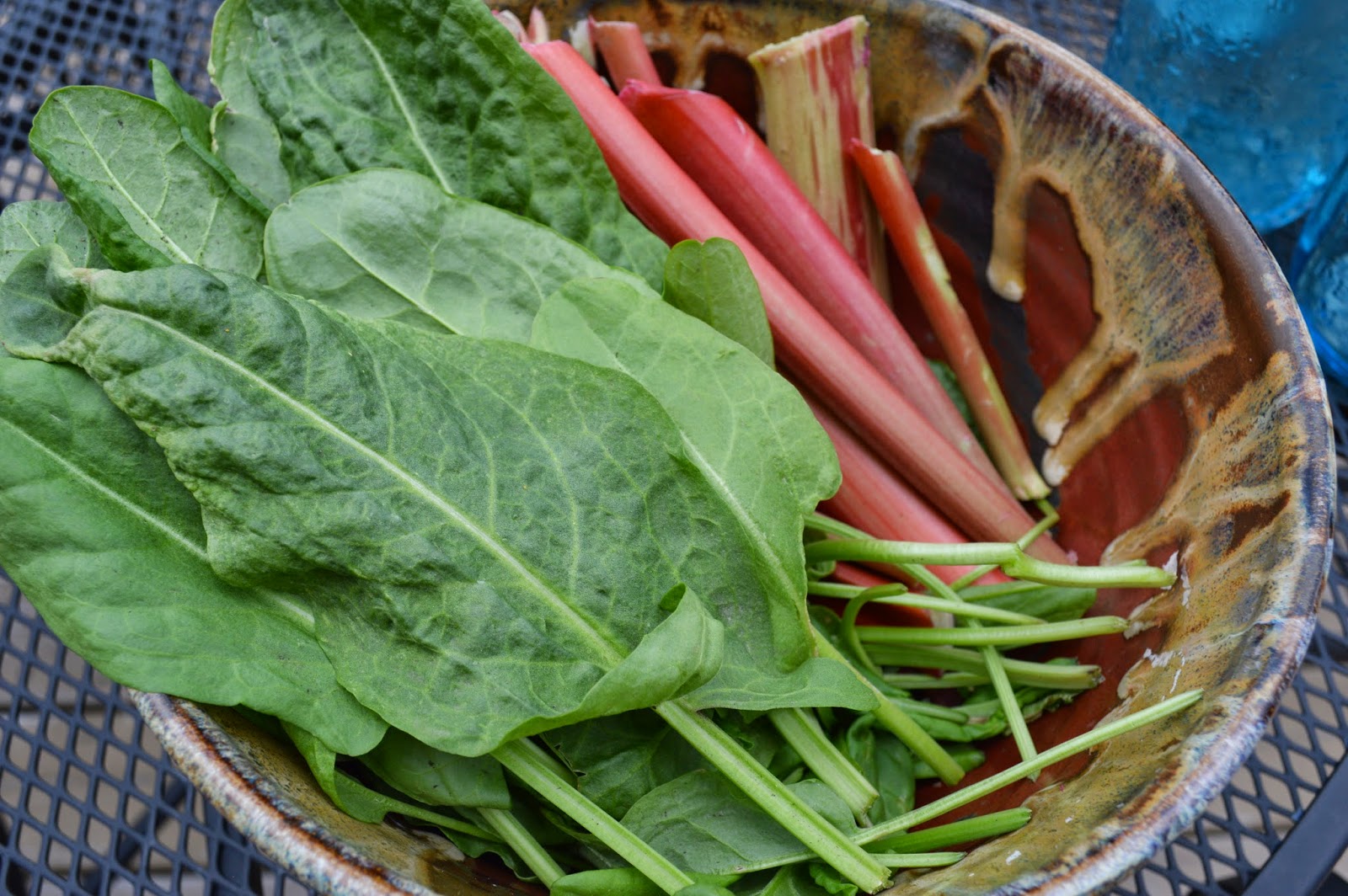 Chop the rhubarb finely.  (Whenever directions say to finally chop something, it makes me think of that cheese commercial.  "They finally shredded cheddar?")  You want about 4 cups.  Of rhubarb, that is, not cheese. 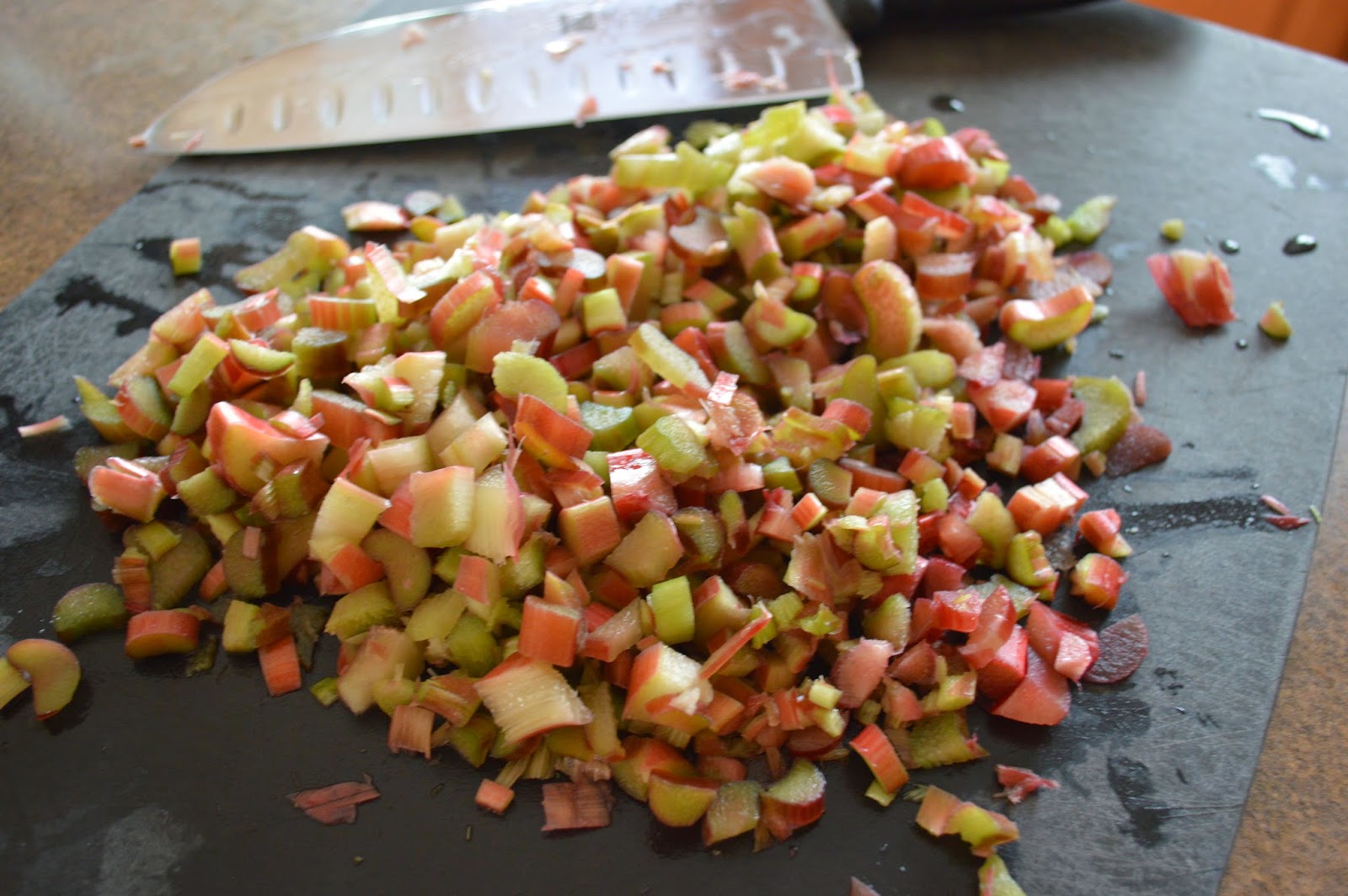 Do the same to the sorrel. You want about 2 cups of it. 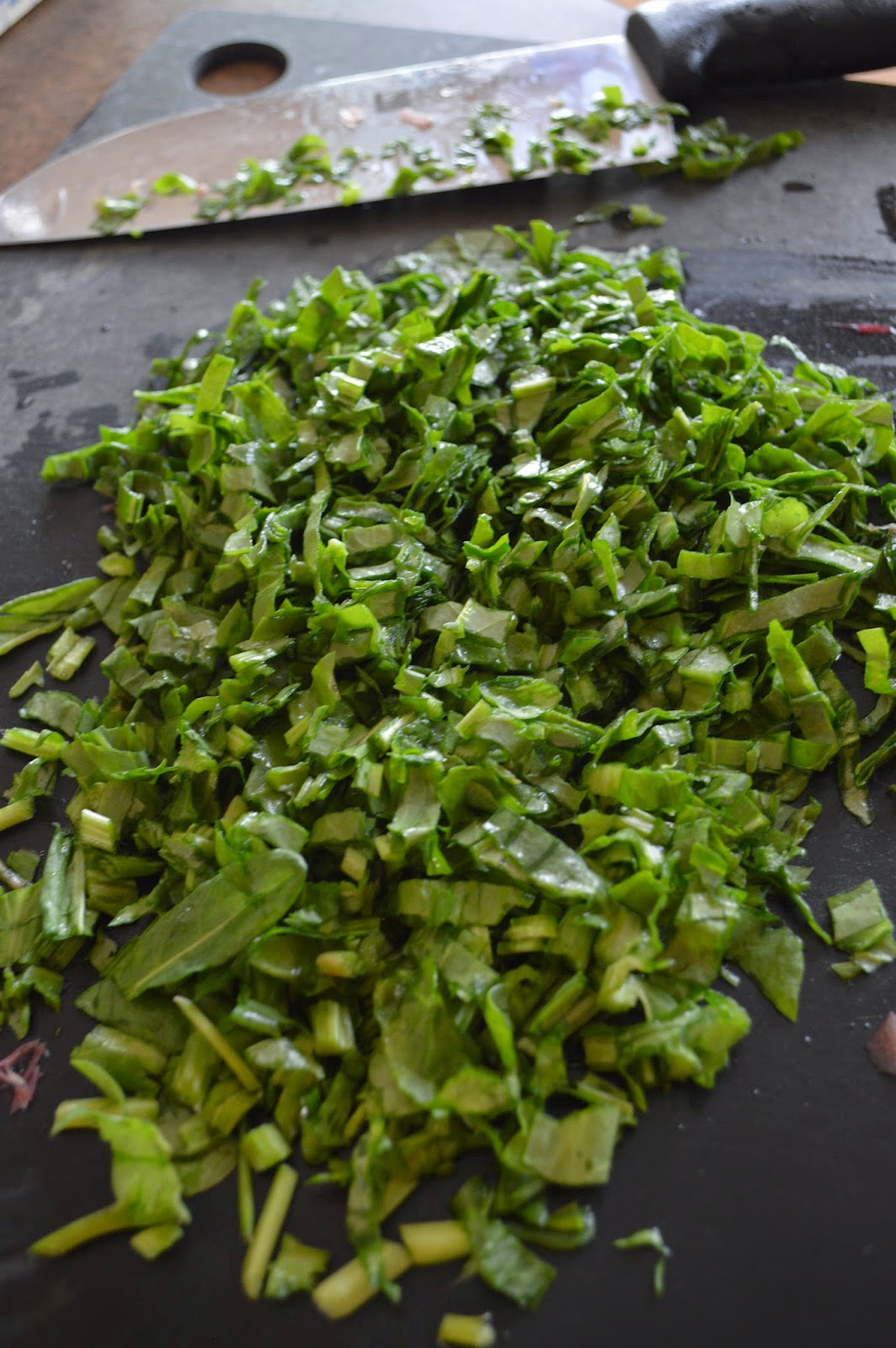 Throw both in a large pot with a cup of sugar, the zest of an orange, and a teaspoon of vanilla. 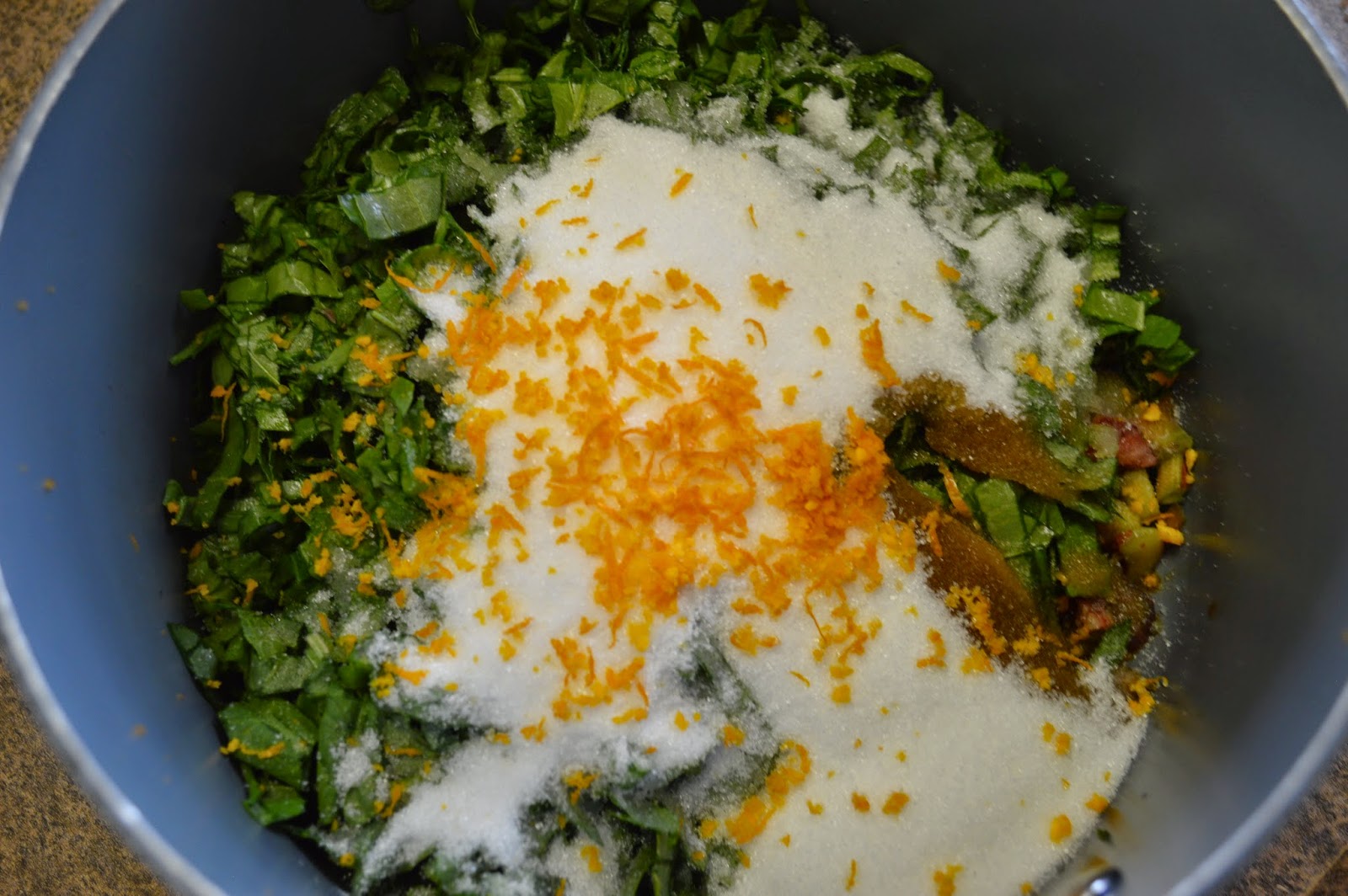 Stir it up, put it over medium to high heat to bring it to a boil, then simmer it for 4 minutes. 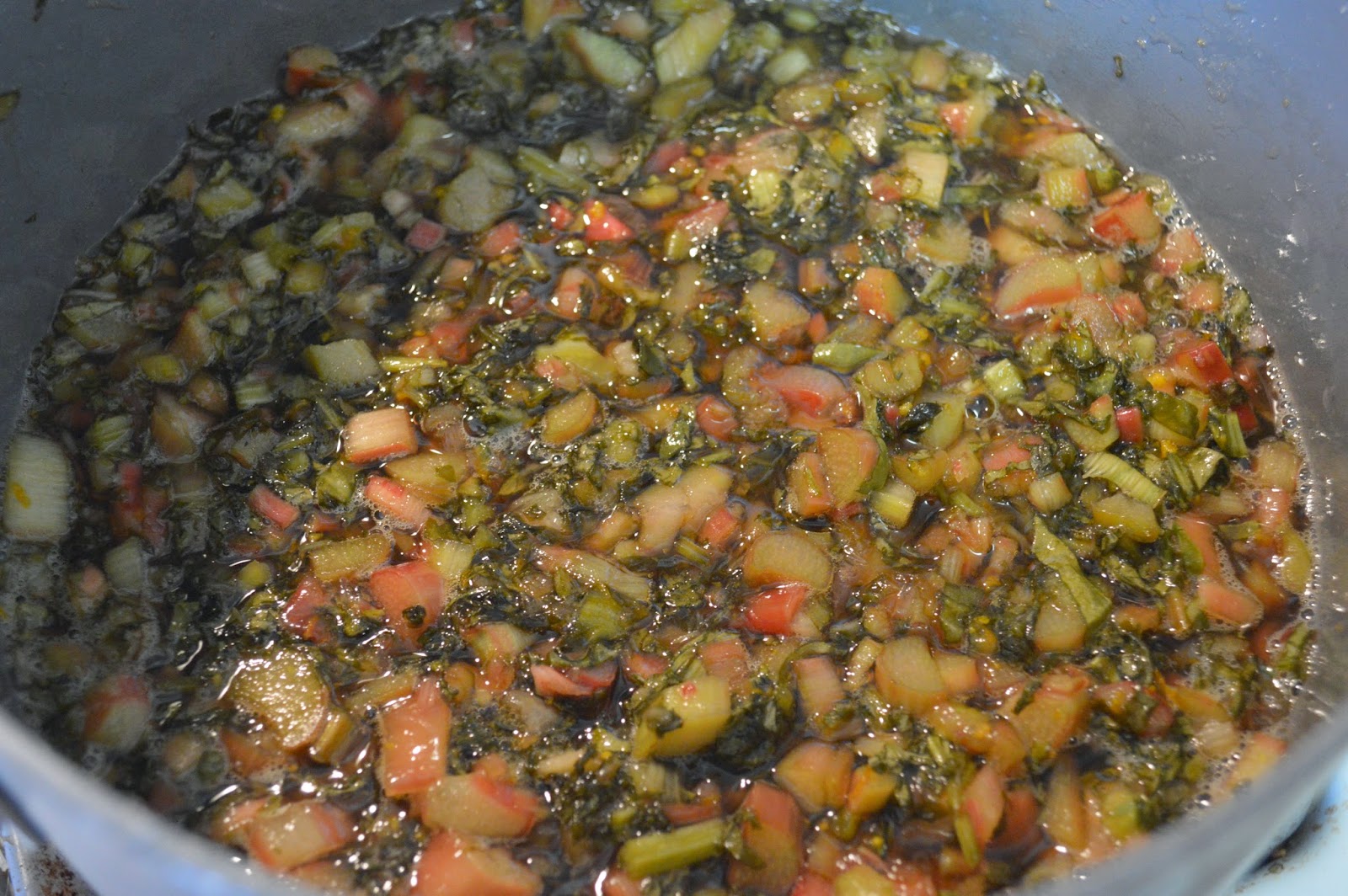 Measure out a quarter cup of water and stir in 3 tablespoons of corn starch.  Corn starch isn't usually an ingredient that I use, except for in science projects, but you can find good natural brands if you search them out.  And it's a great thickener.  Life's all about balance, right? 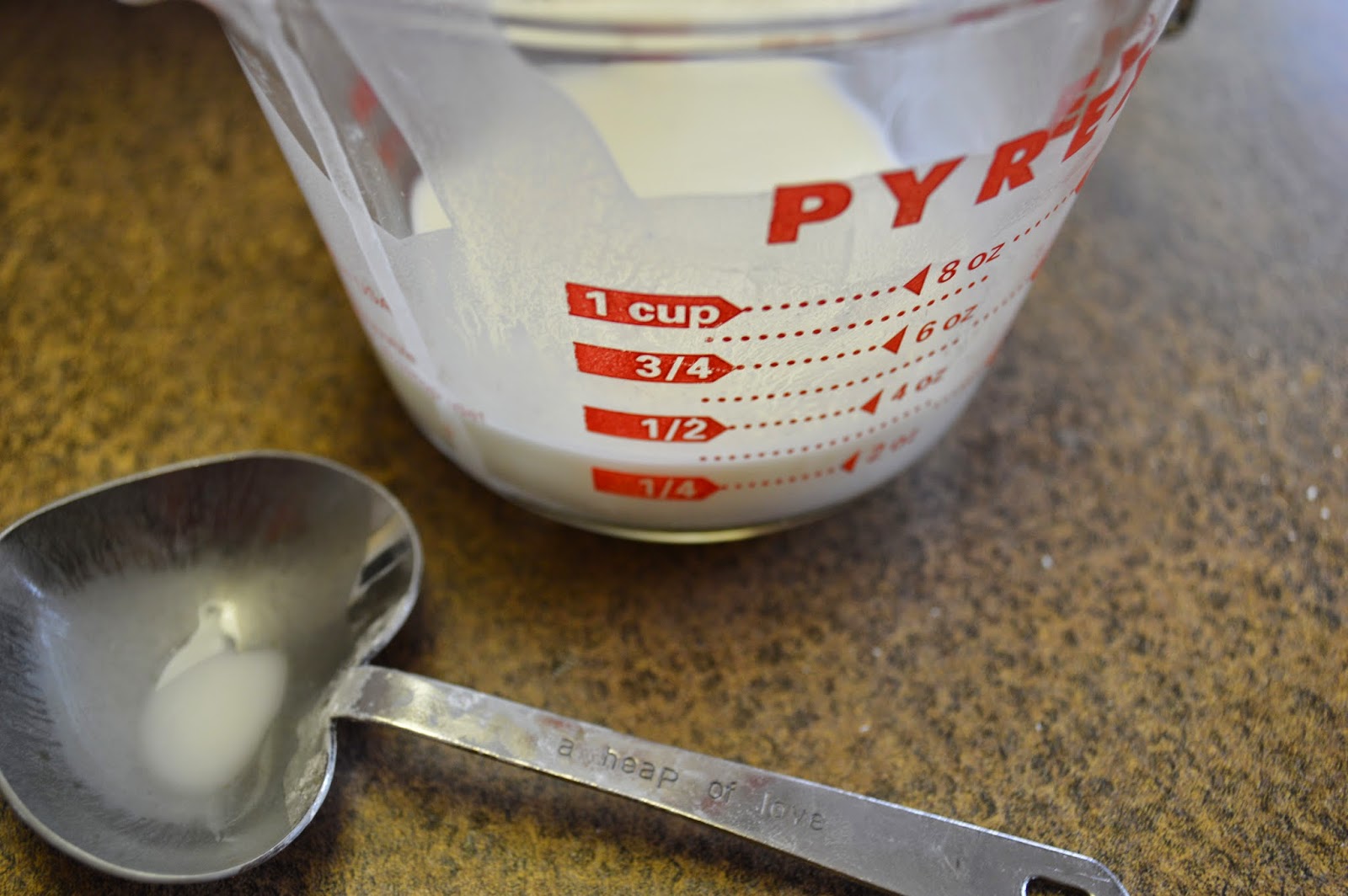 After the 4 minutes, stir the corn starch mixture into the sauce and simmer it, stirring, until it thickens up.  It doesn't take long.  After it thickens up, take it off the heat and set it aside. 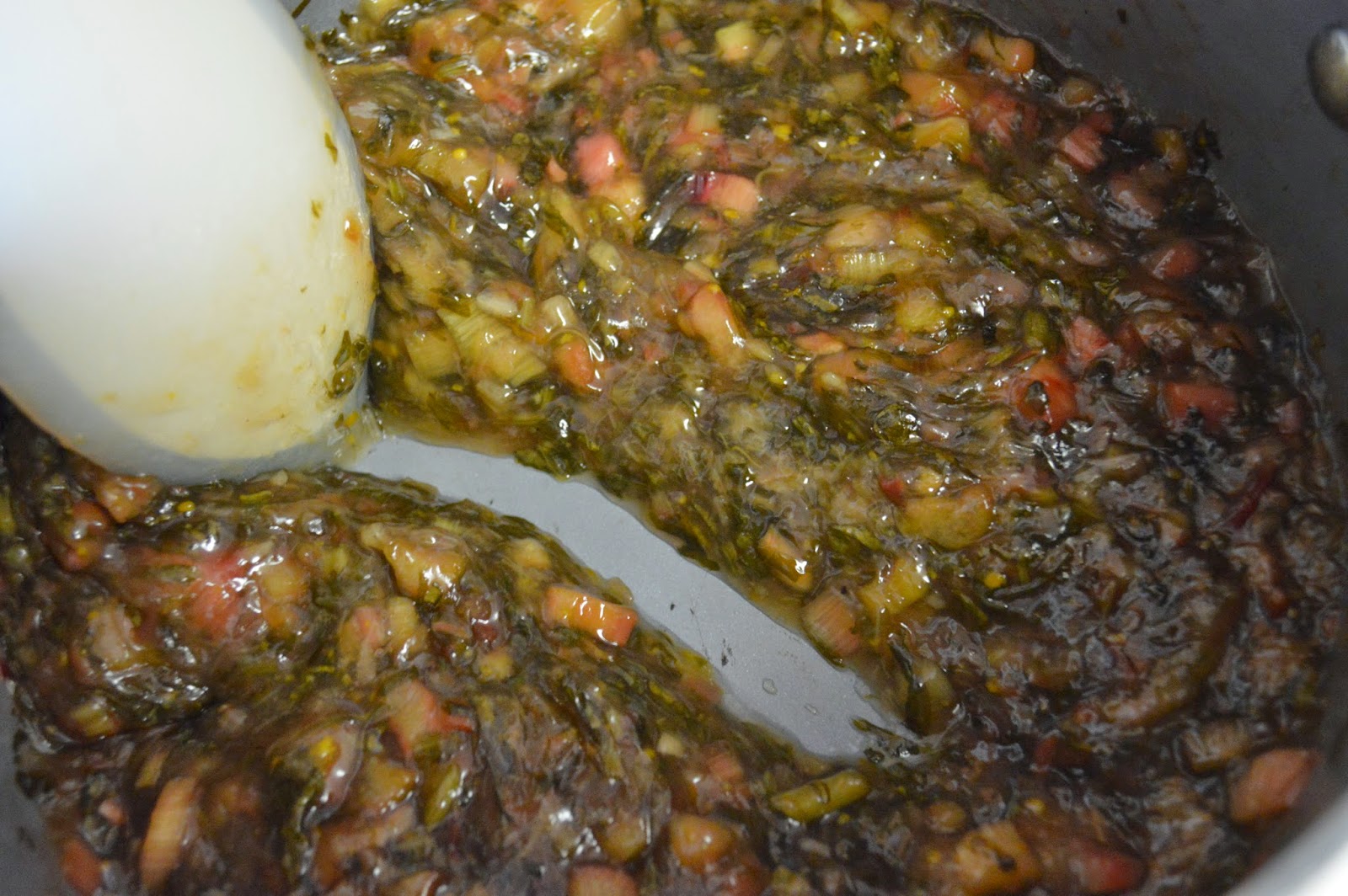 One of my big worries before I started in on this recipe was that I know that cooking sorrel turns it a swampy, not-so-appetizing green, and I wasn't sure how that would work in a dessert.  And, to be honest, the filling looks a little on the funky side...but it does get better!

Next comes the crumble.  Garb a bowl and toss in a cup and a half each of flour and rolled oats, 3/4 cup of brown sugar, a pinch of salt, and a sprinkling of cinnamon.  You can also add in a half cup of your favorite chopped nuts, if you want.  I wasn't feeling nutty tonight, despite the kids' best efforts to drive me nuts, so I skipped it. 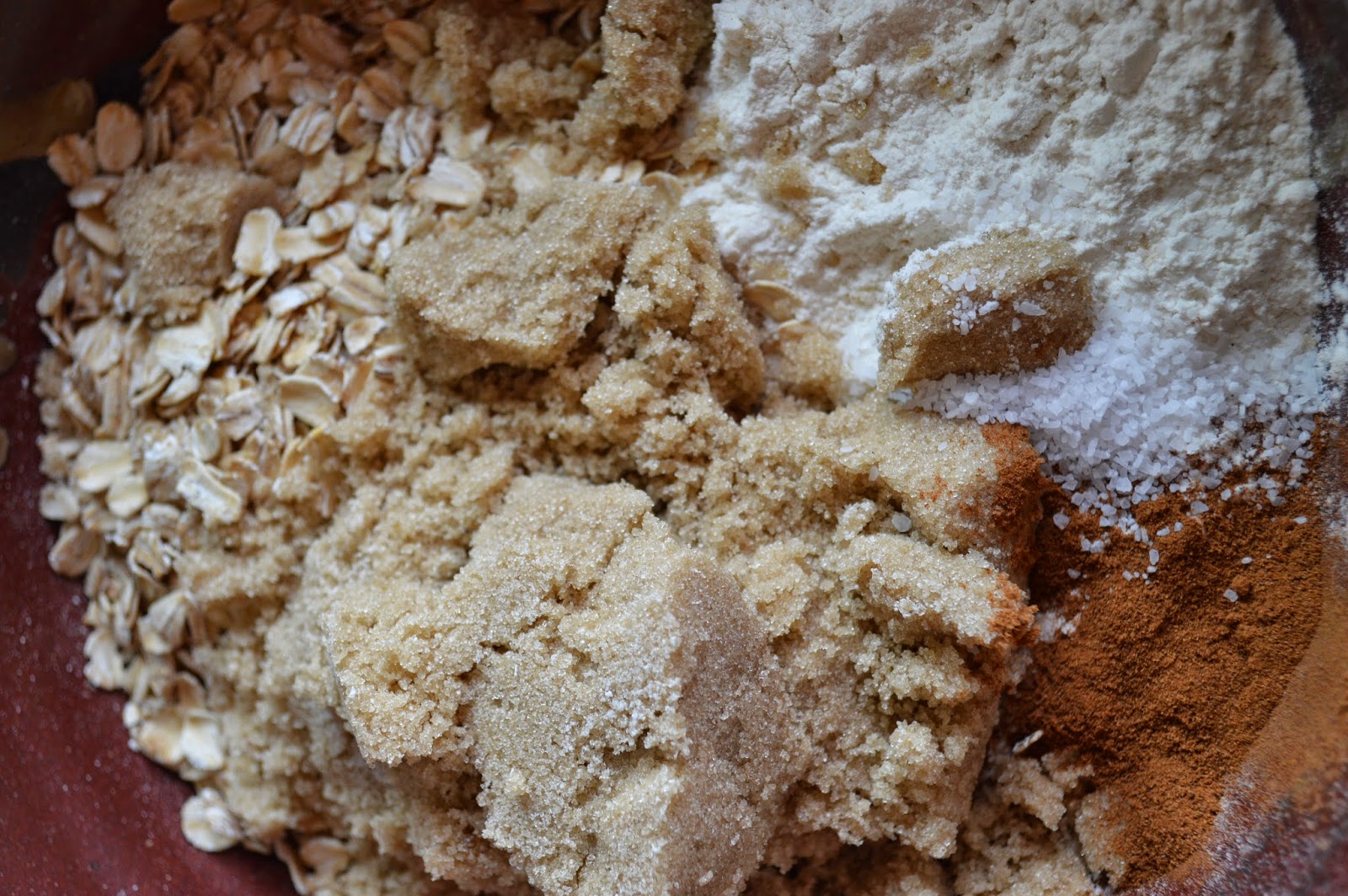 Give it a mix, and then add in the butter, cut into pieces. 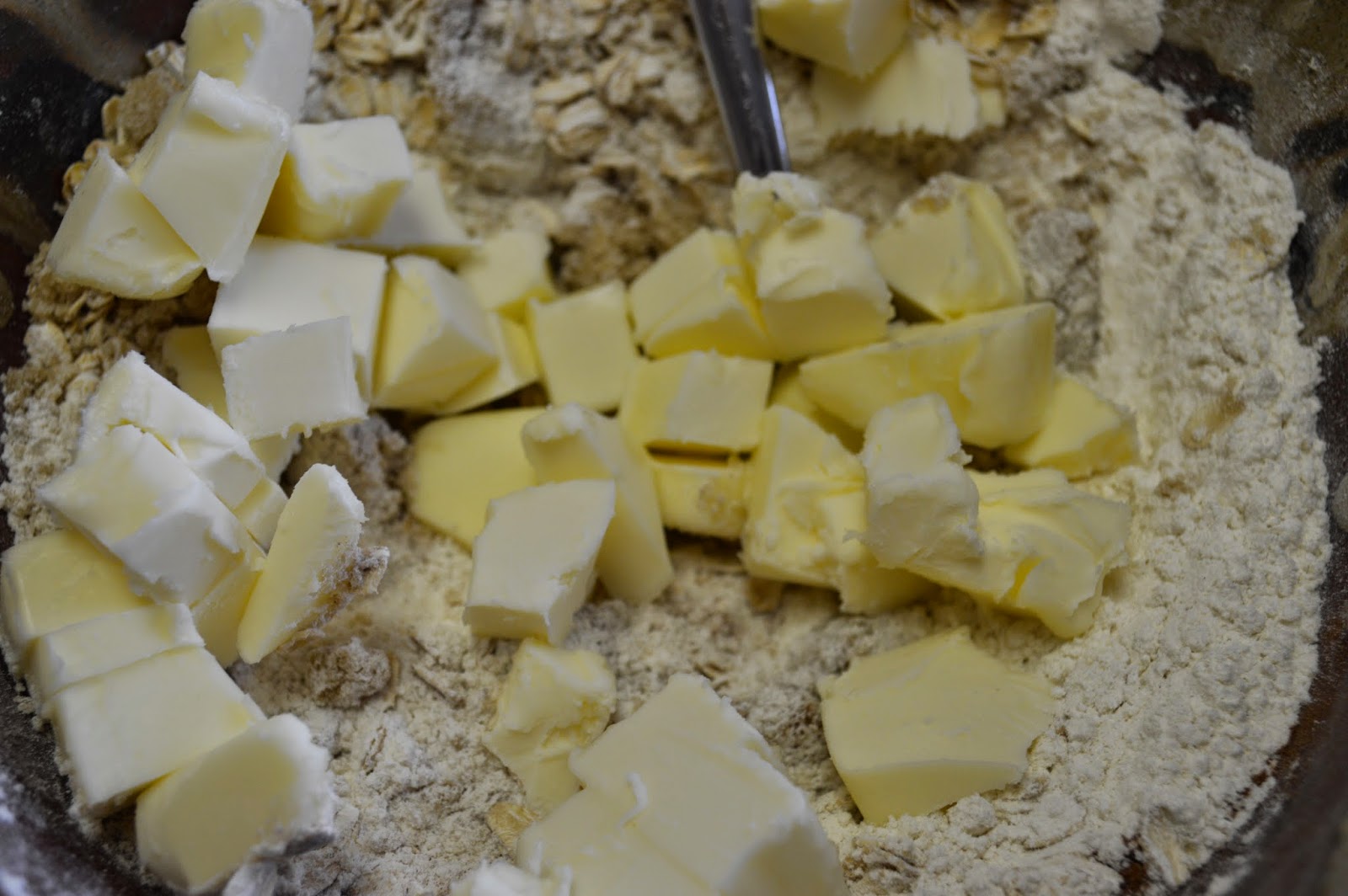 Mix it until it resembles crumbs.  Now, any good crisp-maker will tell you, the best way to do this is with your hands.  Dig in and get dirty.  It's quicker and makes a better consistency than any other method I've tried. 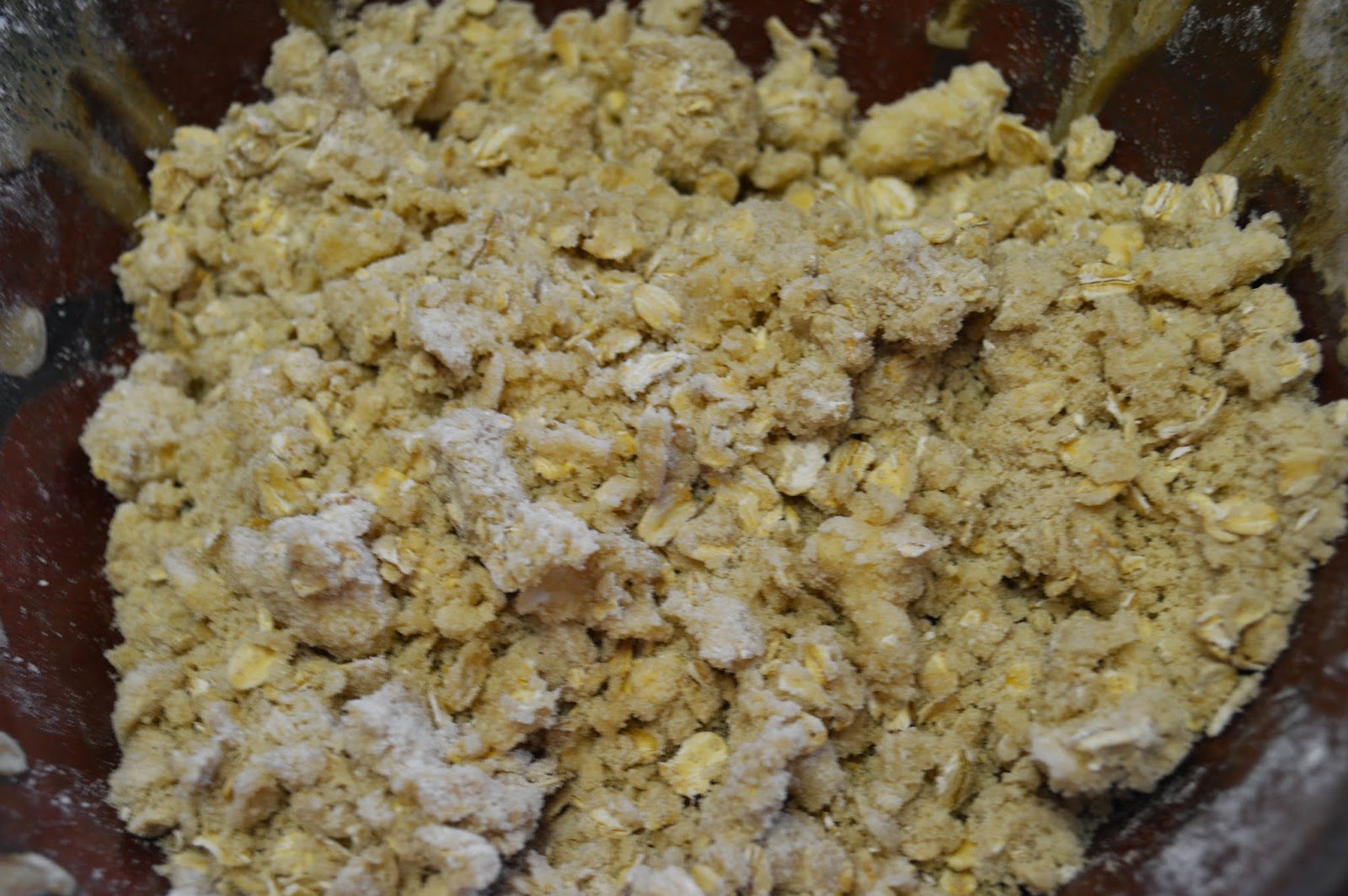 Take about two thirds of the crumbs and put them into the prepped pan.  Press them down firmly to make a bottom crust. 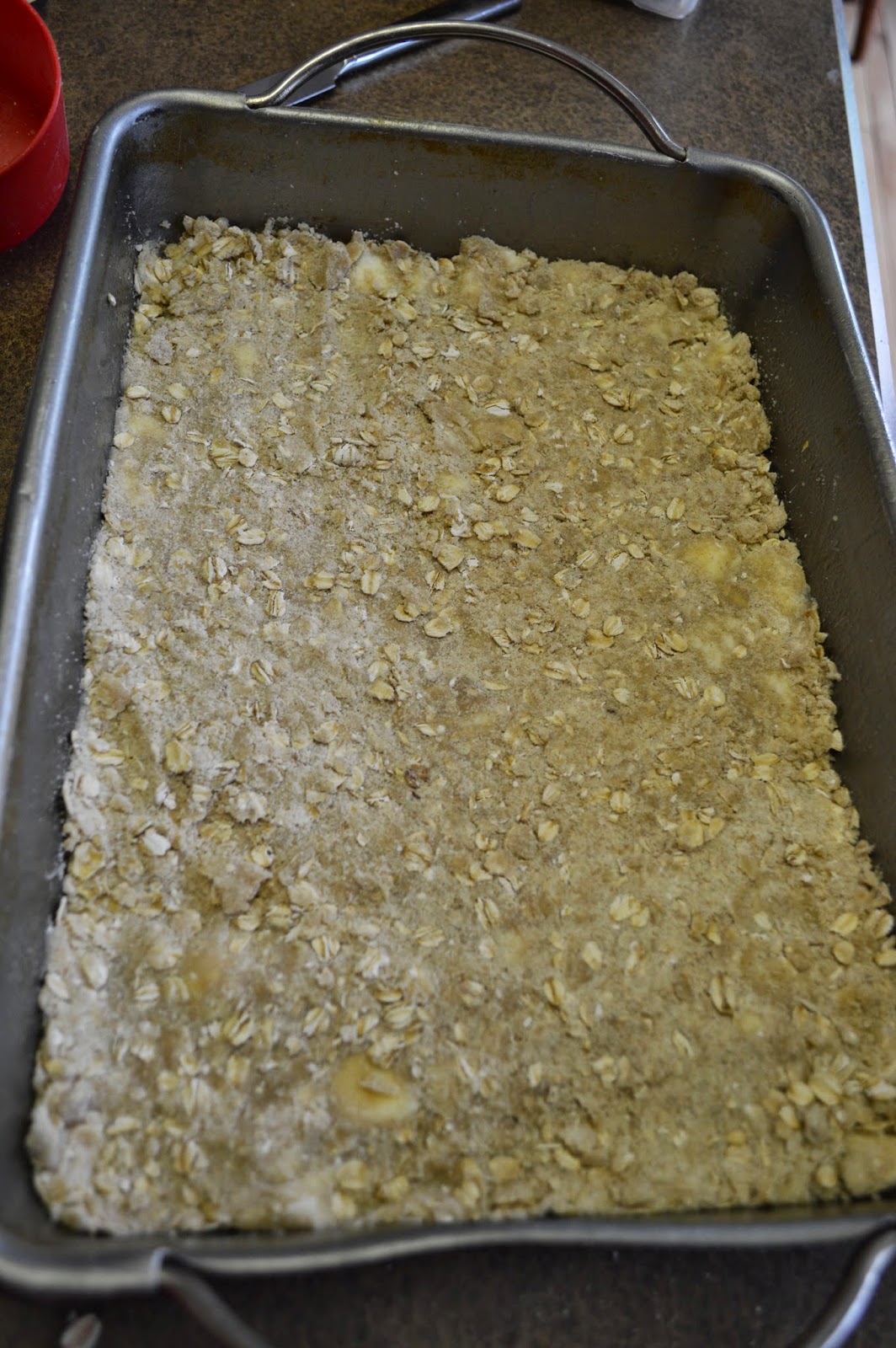 Spread the rhubarb sorrel mixture evenly on top of the bottom crust. 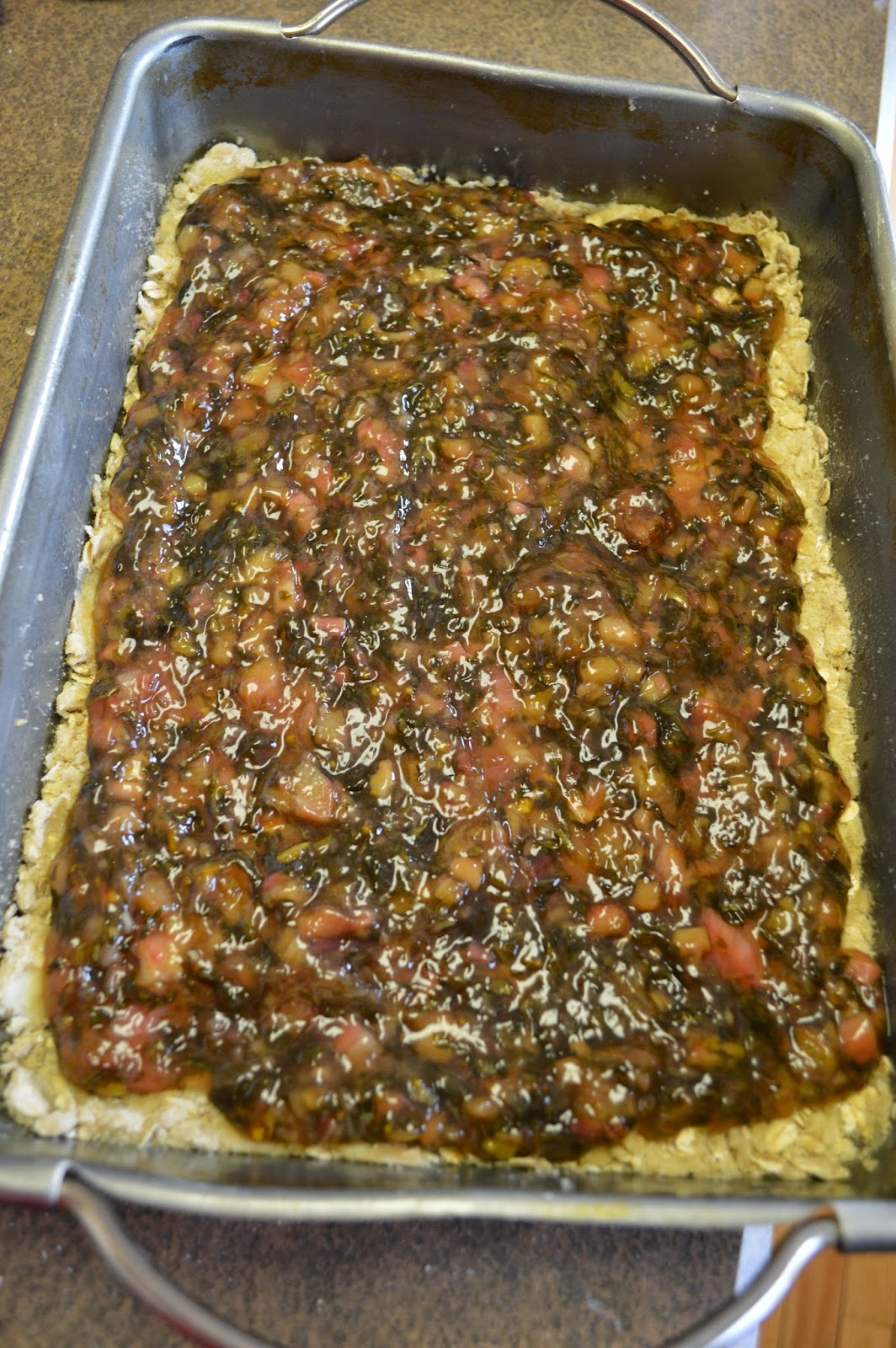 Sprinkle the rest of the crumbs over the top of the filling.  You can press it in a little, if you like, or just leave it be. 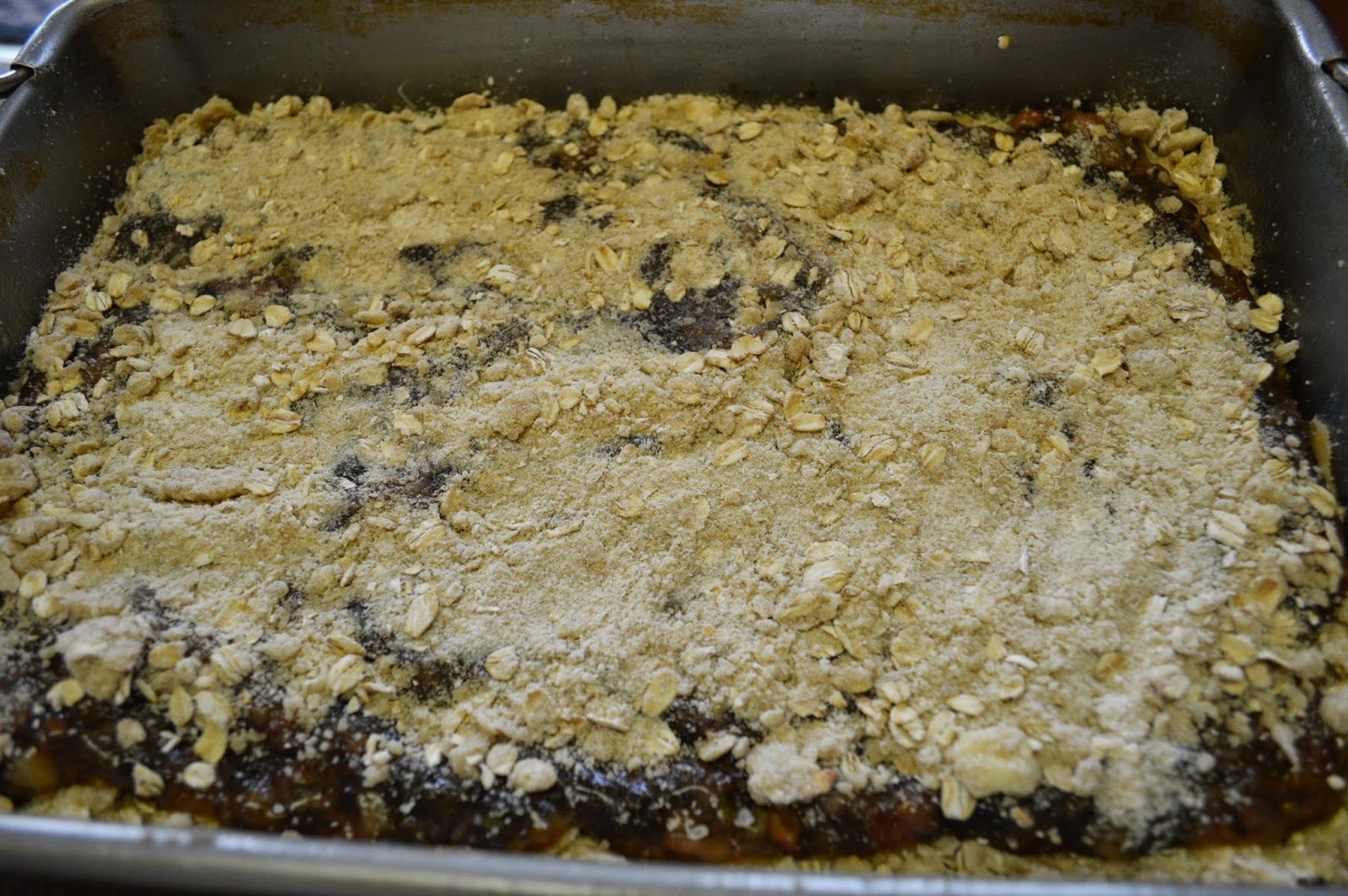 Take it out and let it cool before cutting into it and enjoying springtime bliss.  I know, waiting is hard. 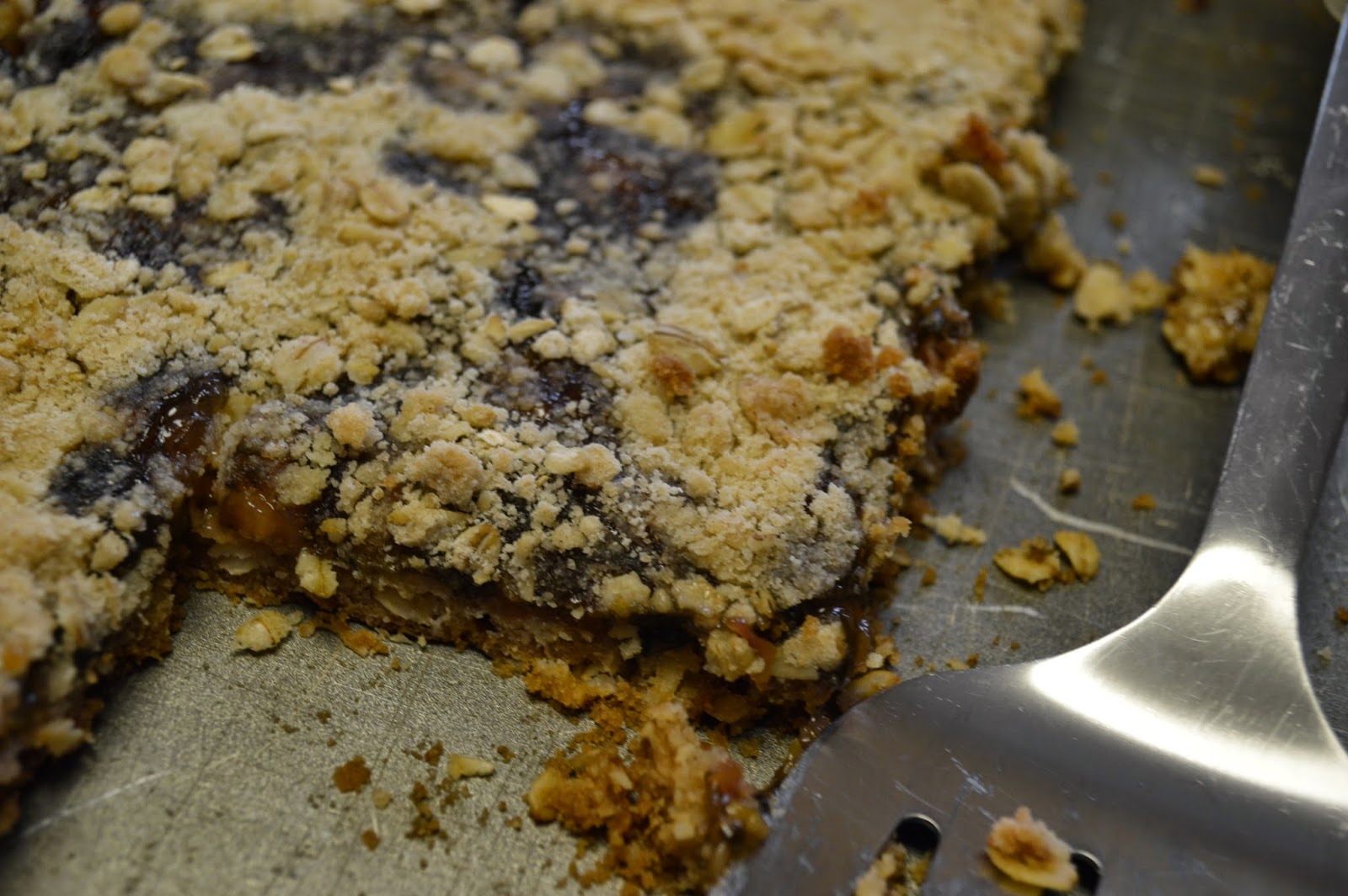 It's so worth it.  I almost ate myself sick.  I need better impulse control.  Beauty may be pain, but so is culinary greatness.  Anyways, enjoy your crisp! 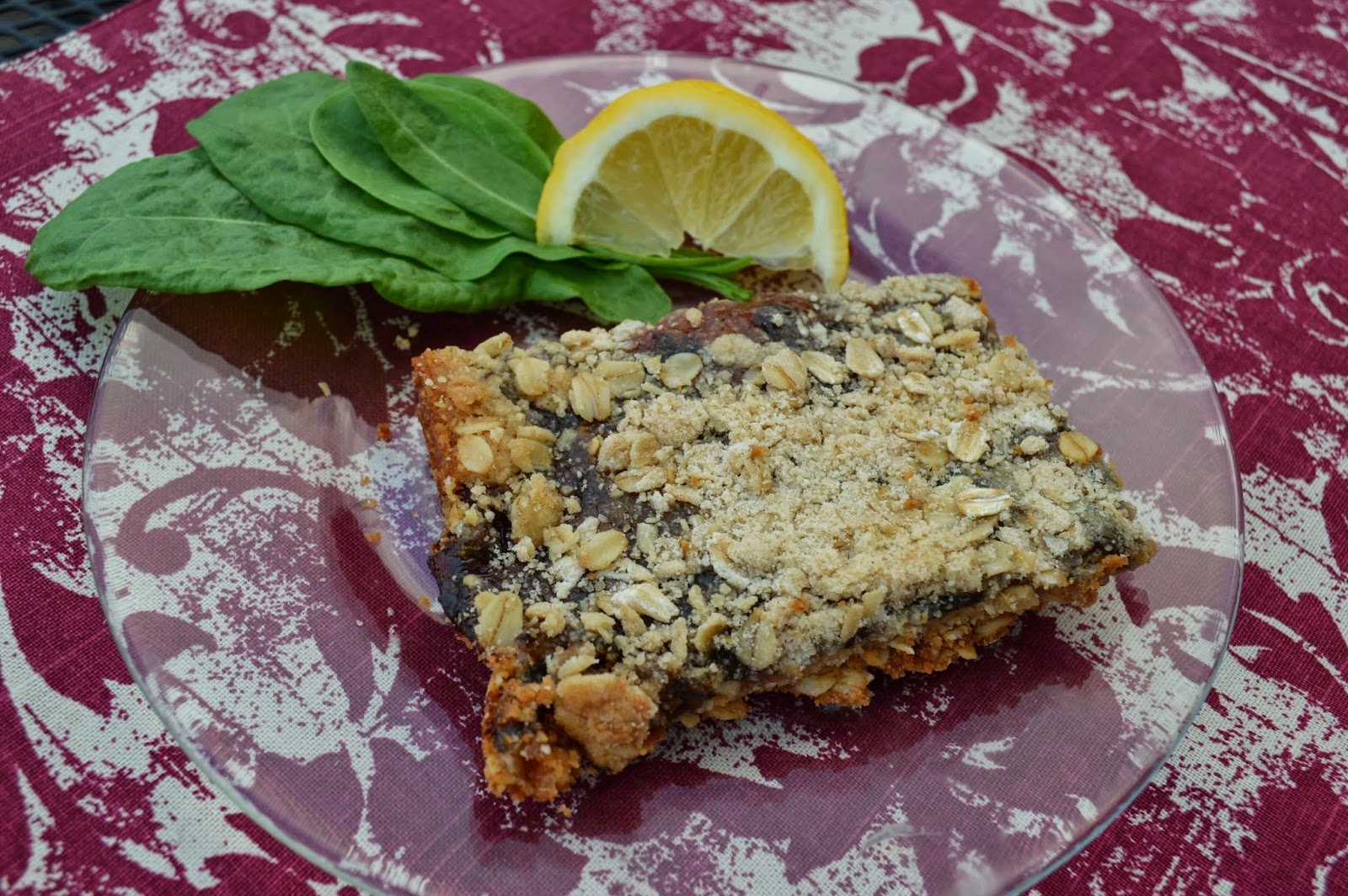