In this week's CSA, we're starting to see a bit more color!  Along with a ton of green, that is.  And I was so excited for the new veggies! 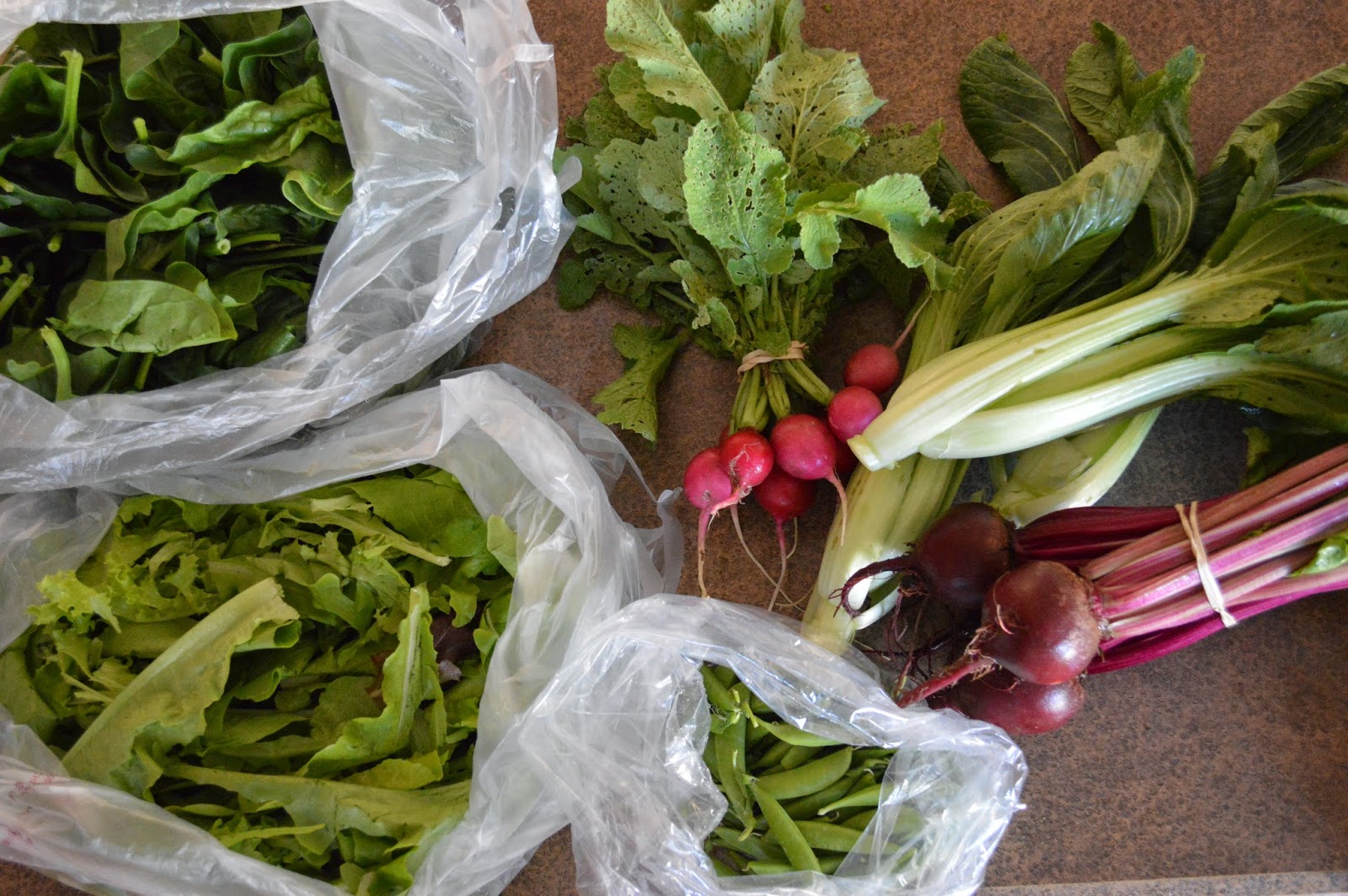 We got massive bags of both spinach and lettuce, radishes, bok choy, beets, and sugar snap peas.

The peas barely made it through a picnic dinner at my softball game that night only to be finished off in the hub's lunch the next day, along with the radishes.  I plan to roast the beets to freeze, and blanch and freeze the beet greens.  The lettuce will be more salad, until the family rebels.  Luckily, my middle child has a sleepover this week, so I think salad will be a great side to pizza, wink wink.  The bok choy will probably go into a quick side dish for dinner one night.

As for the spinach... 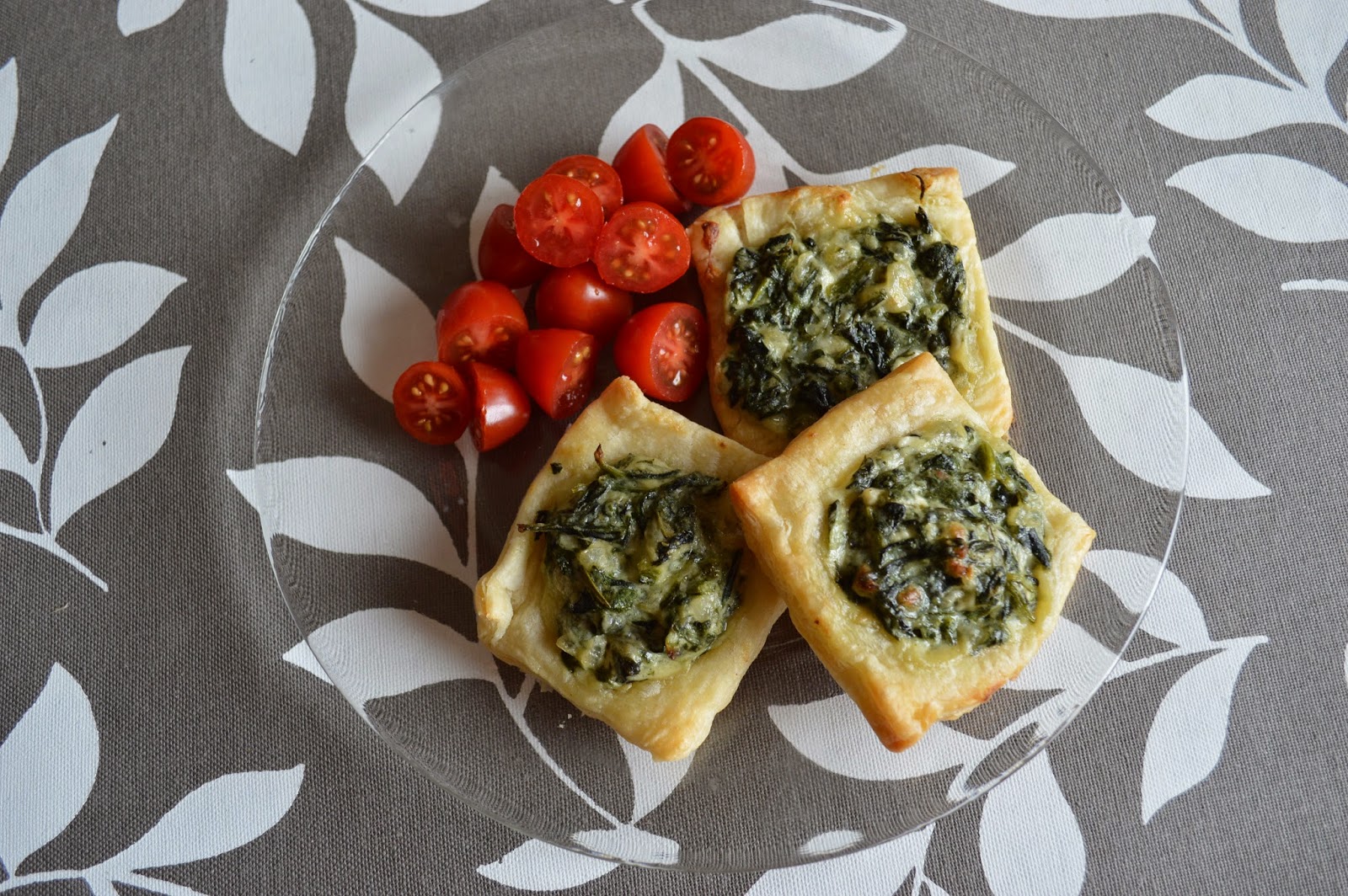 Let me introduce you to a magical concoction that I call "Unlimited Potential Spinach", because you can use it in so, so many ways.

Finely dice up some onion. 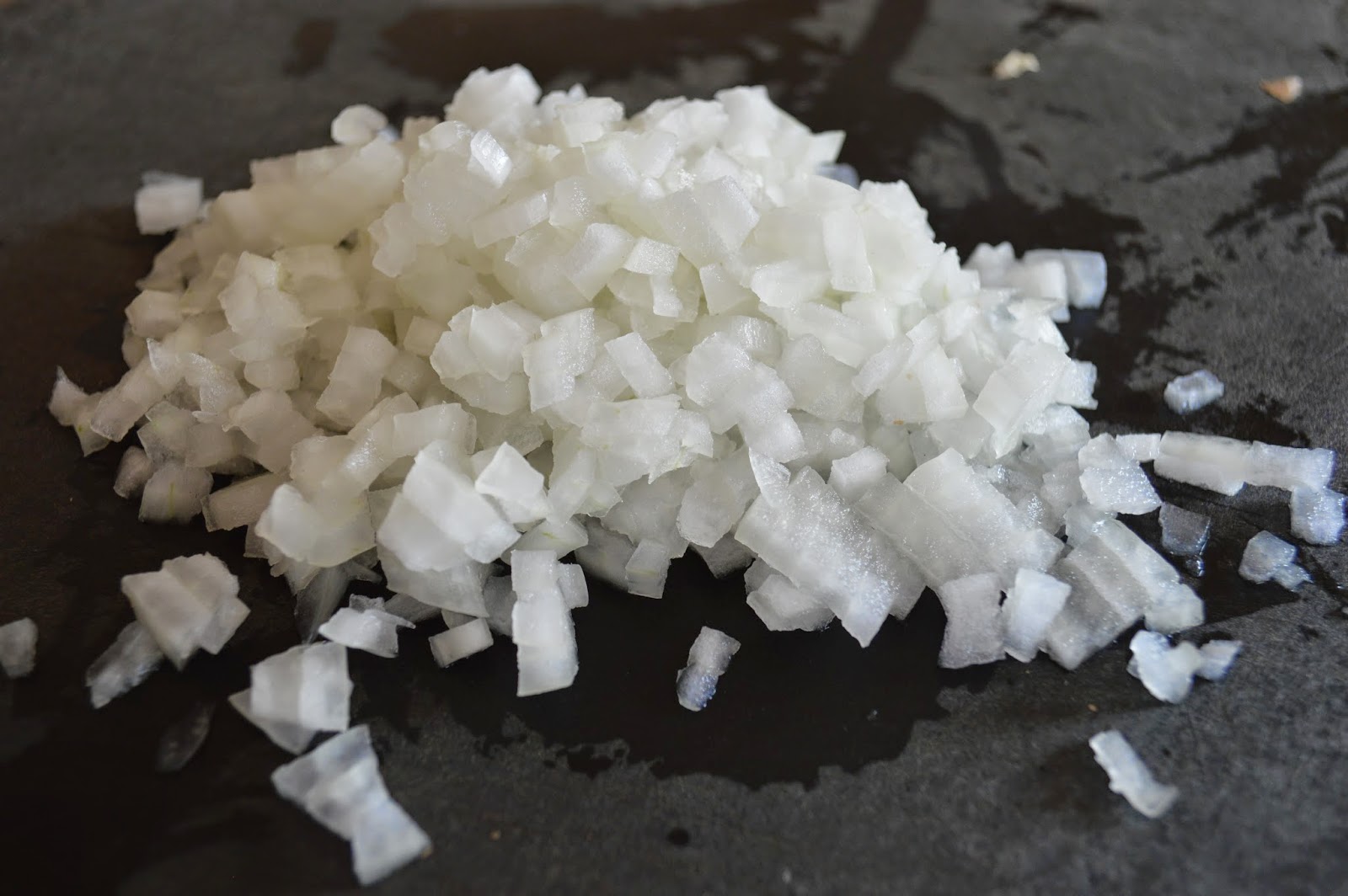 Melt down your fat of choice in a large pan...I went with about a tablespoon each of butter and olive oil.  Saute the onion and a couple of cloves of minced garlic over low heat. 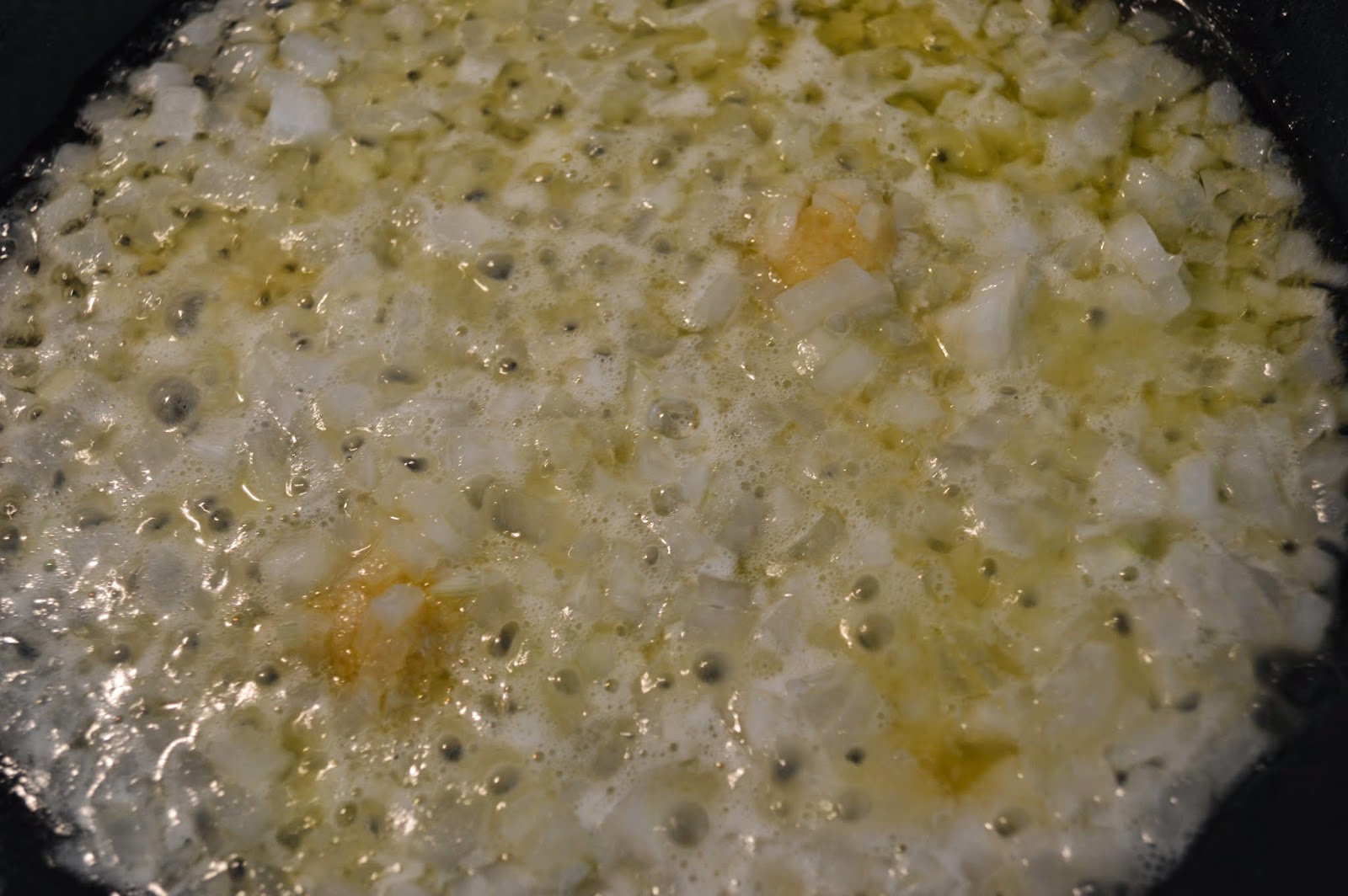 Grab a ton of clean spinach and give it a chop through.  It will seem like way too much, but spinach cooks down like crazy. I used the entire bag from the CSA share, over a pound.  Toss that in on top of the onion mix.


Grab a bunch of fresh herbs.  My mix is parsley, rosemary, chives, and winter savory, all straight from my yard.  Chop it up, toss that in too, then add some salt and pepper. 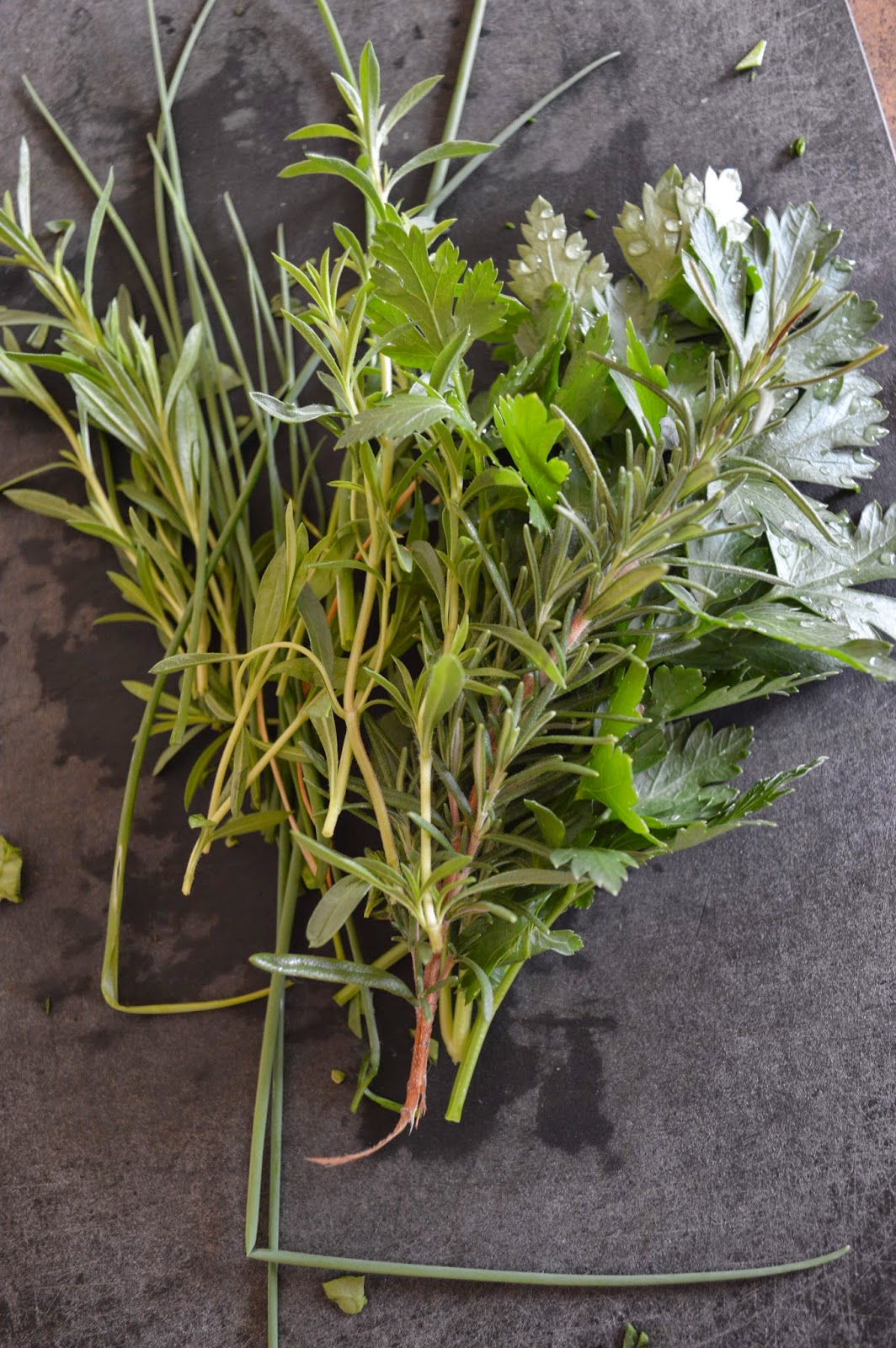 Cook it on down.  Doesn't take too long. 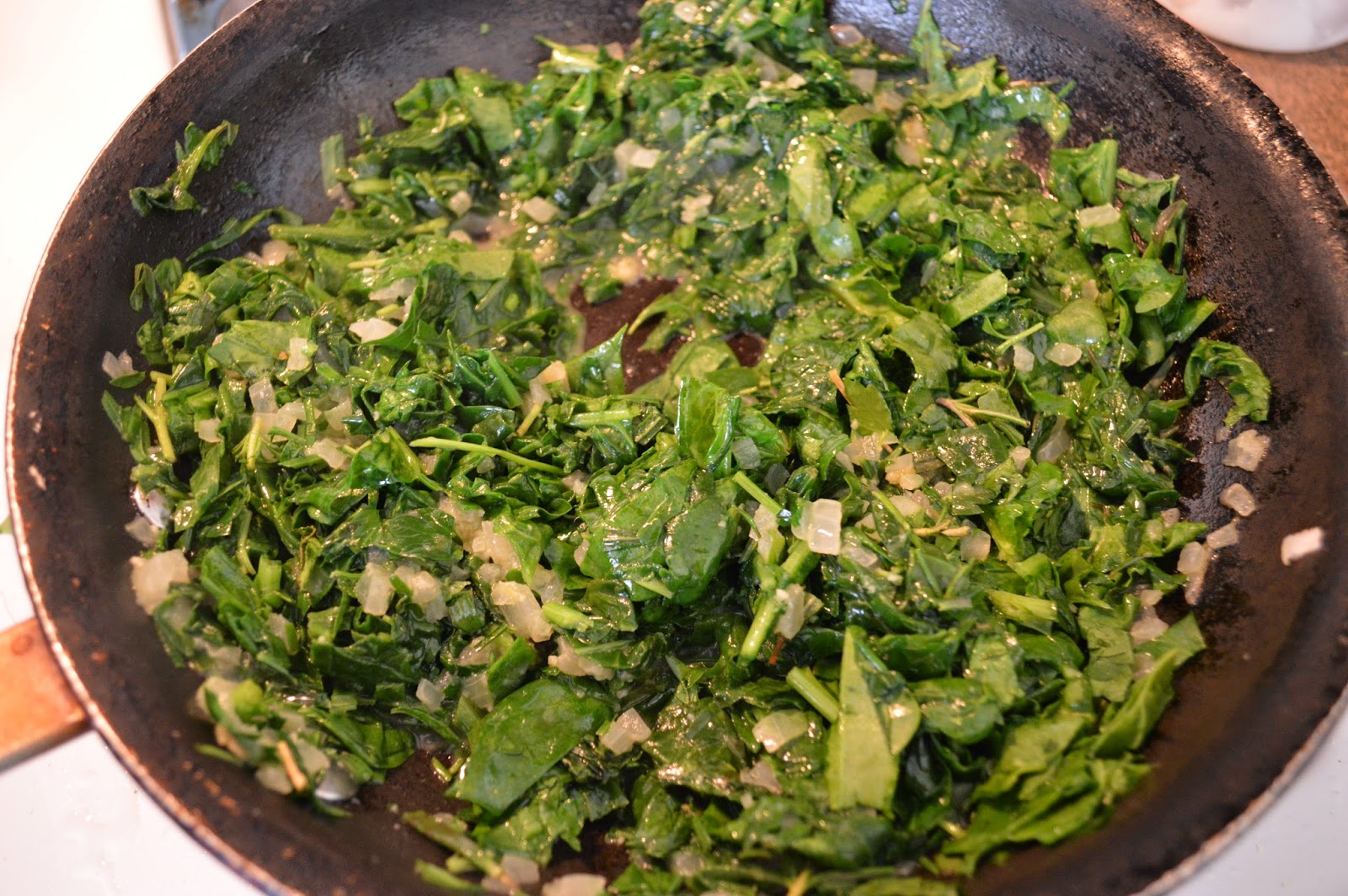 Add in about 4 ounces of cream cheese.  You can go with the reduced fat stuff, if you're watching that, but I go with the real, fat-full, cream cheese.  Some would argue that, with all the veggies packed in this recipe, you should keep it light.  Others would say that the goodness of all that veg gives you a green light to go a little wild.  Choose your comfort level on this one. 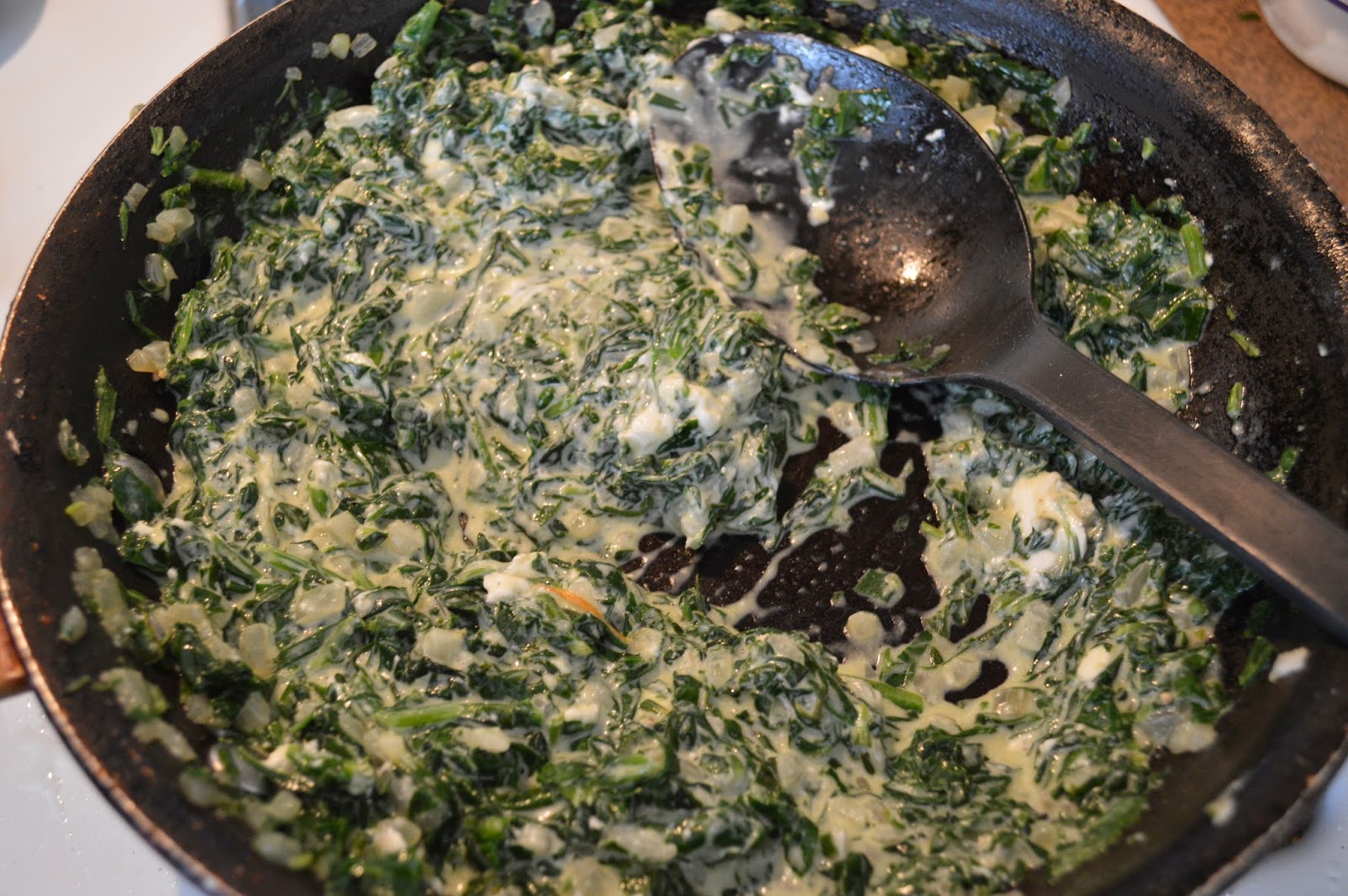 Melt down the cream cheese in the mix.  Take it off the heat, and add in some shredded Parmesan.  1/4 to 1/2 a cup, again, to your taste. 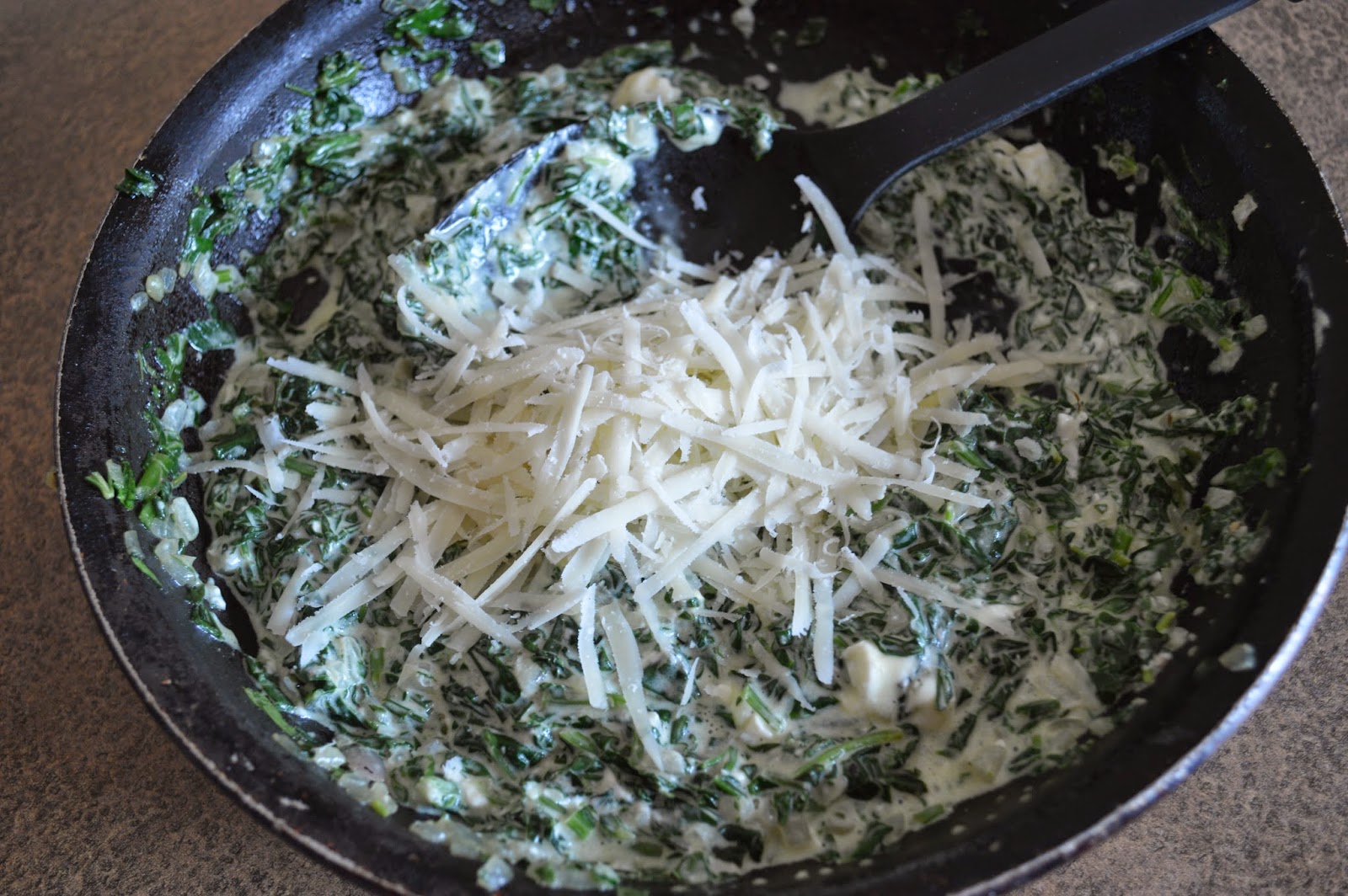 Sample some to check that the seasoning's to your taste.  Then grab some tortilla chips and go to town...I mean... 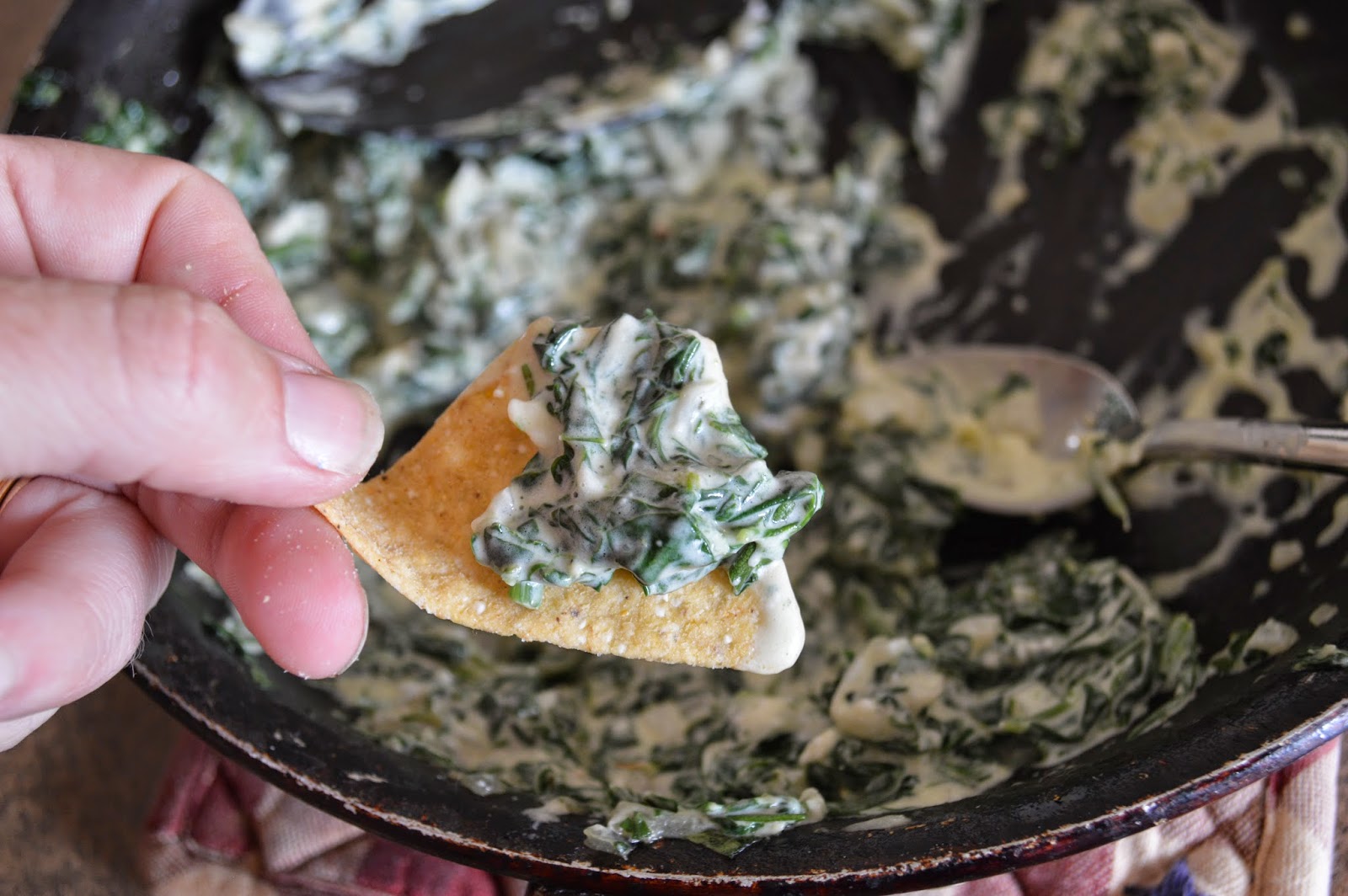 So, obviously, this is a great chip dip.  But that's not all!  Think thinned out with a little milk for a great pasta sauce.  Added into simmering chicken stock for a comforting soup.  Mixed with shredded chicken and slathered on fresh bread in a sandwich.  It also freezes well, just reheat it later. 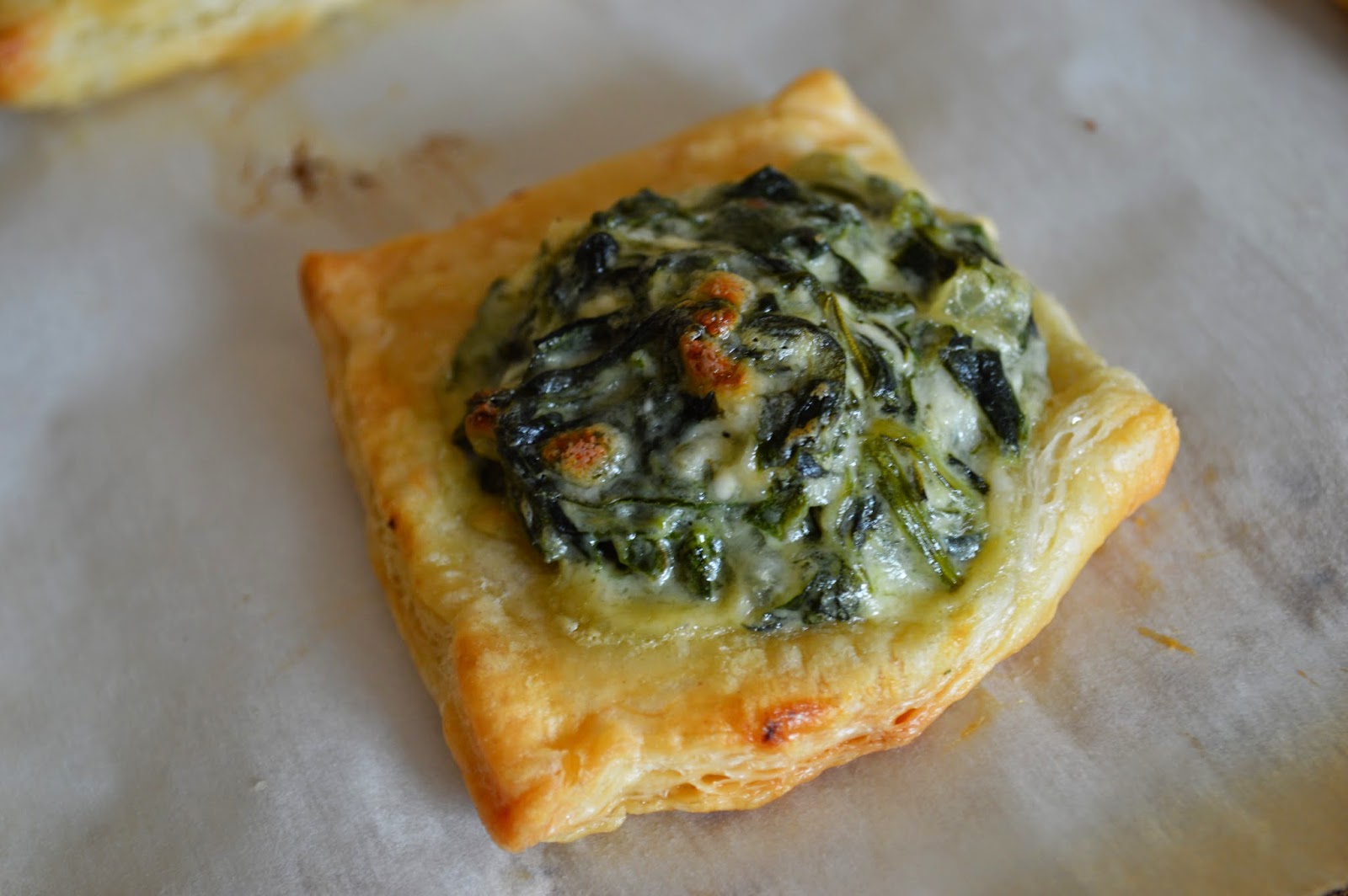 You could make these little spinach tartlets.  Simple enough for a snack, fancy enough for hoighty-toighty dinner affairs.

Thaw some puff pastry according to the directions.  Roll it out and cut it into squares. 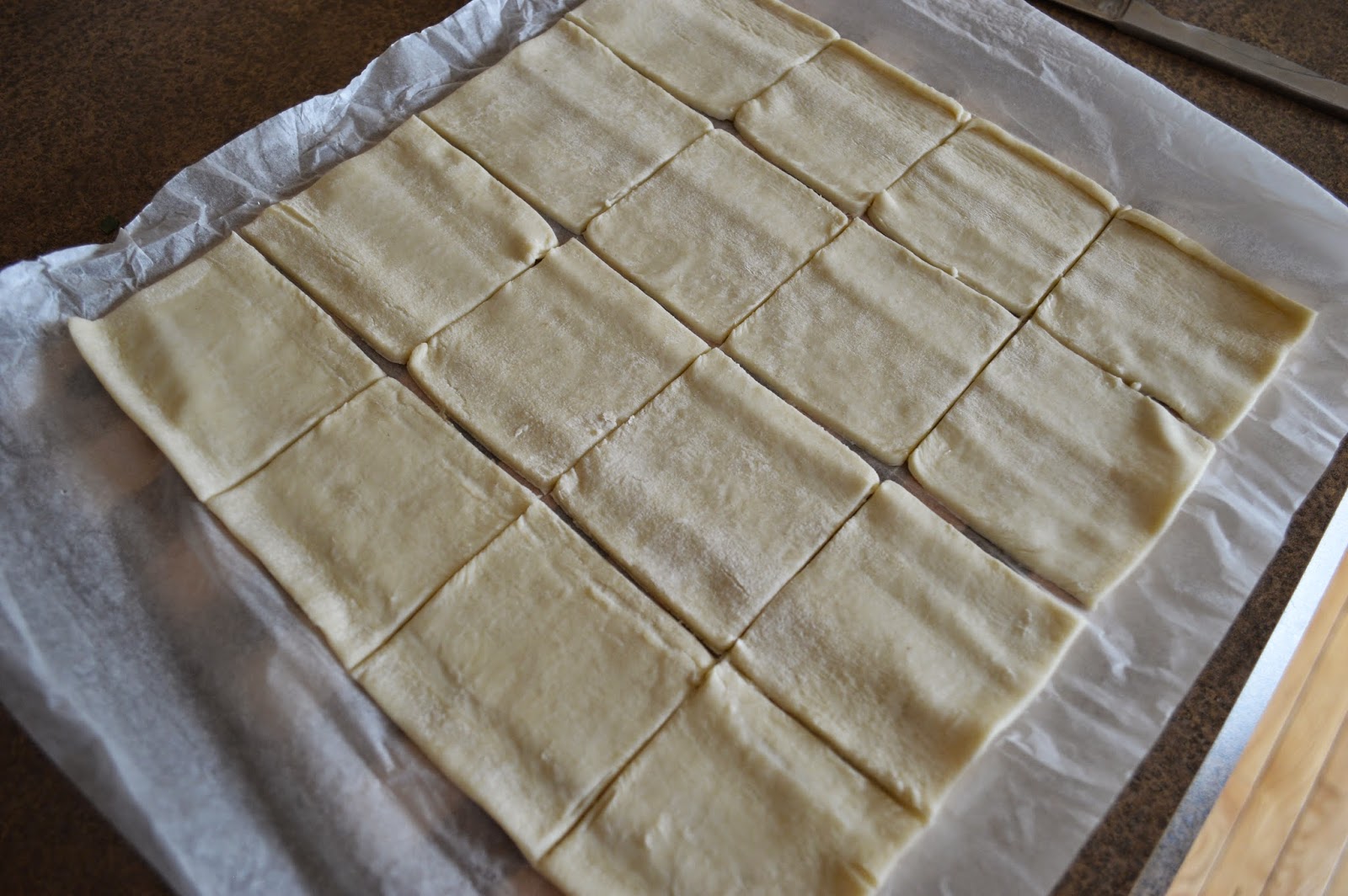 Preheat your oven to 400 degrees.  Line a baking sheet with parchment.  Place the squares on the parchment, and give them a little room from each other.

Spoon some of the spinach amazement in each square. 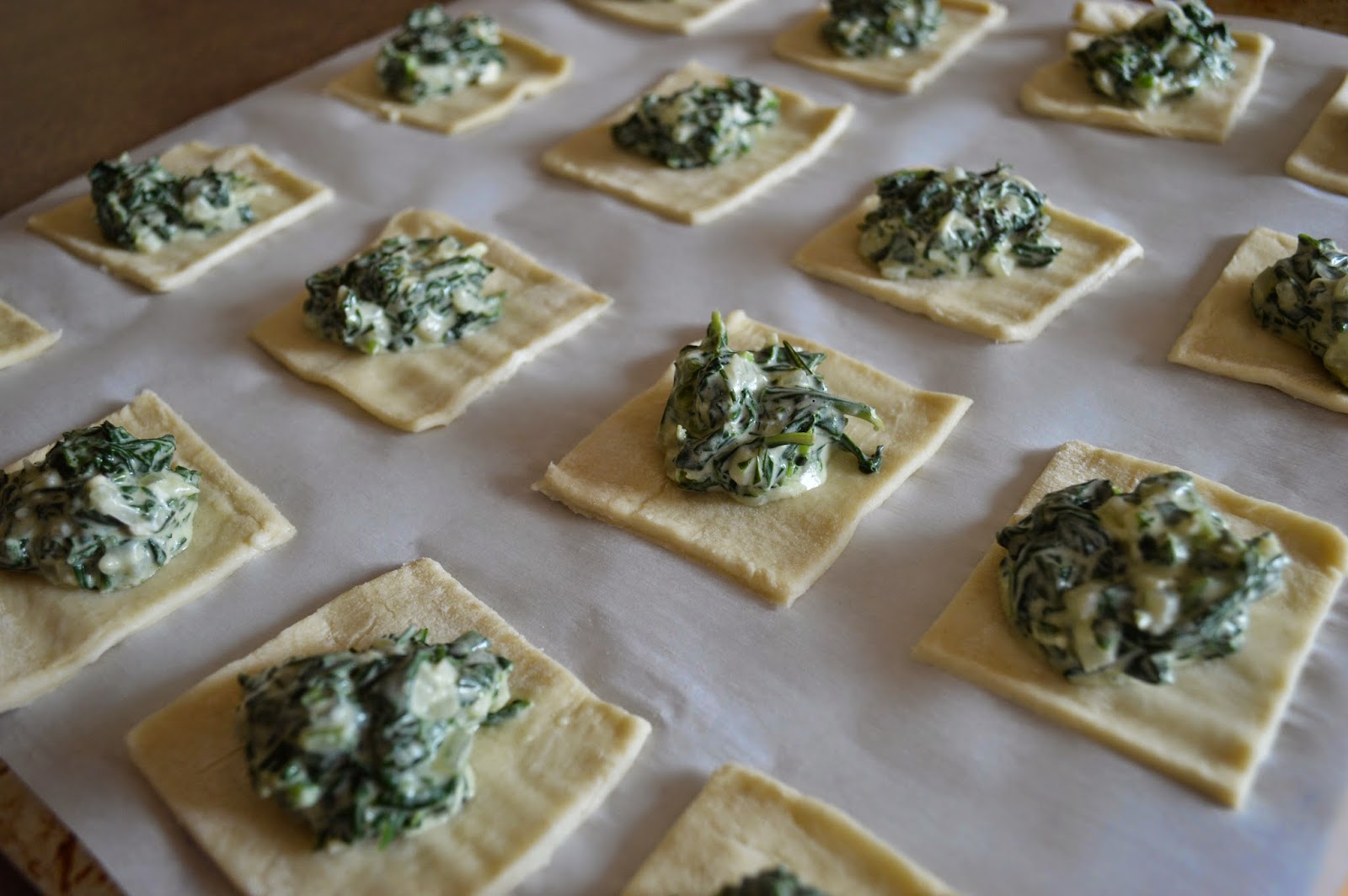 Turn up the edges a bit, to help hold the filling in while they bake. 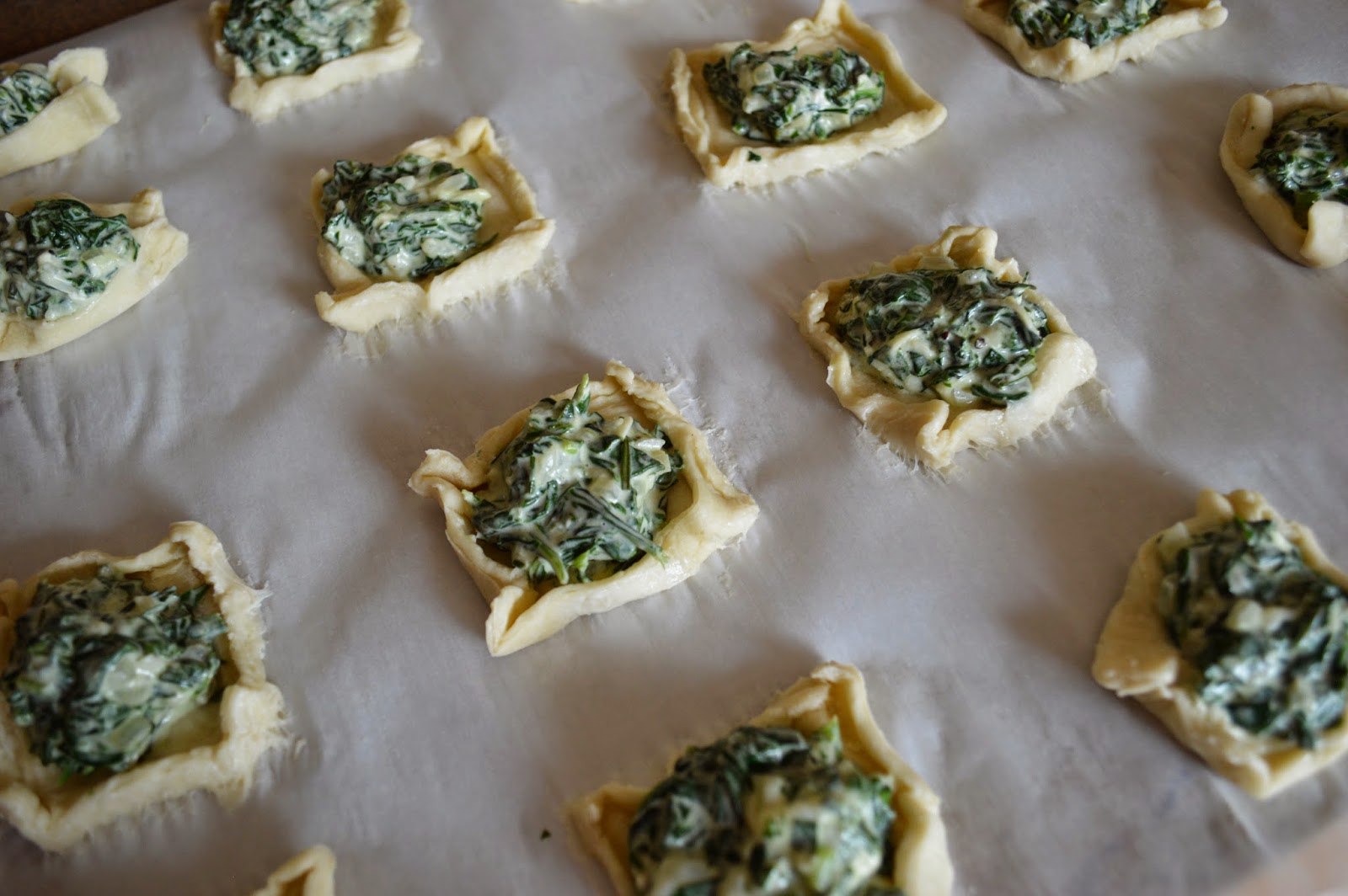 Bake for 12-14 minutes, until the pastry is nice and golden, and the bottoms are crisp all the way across them. 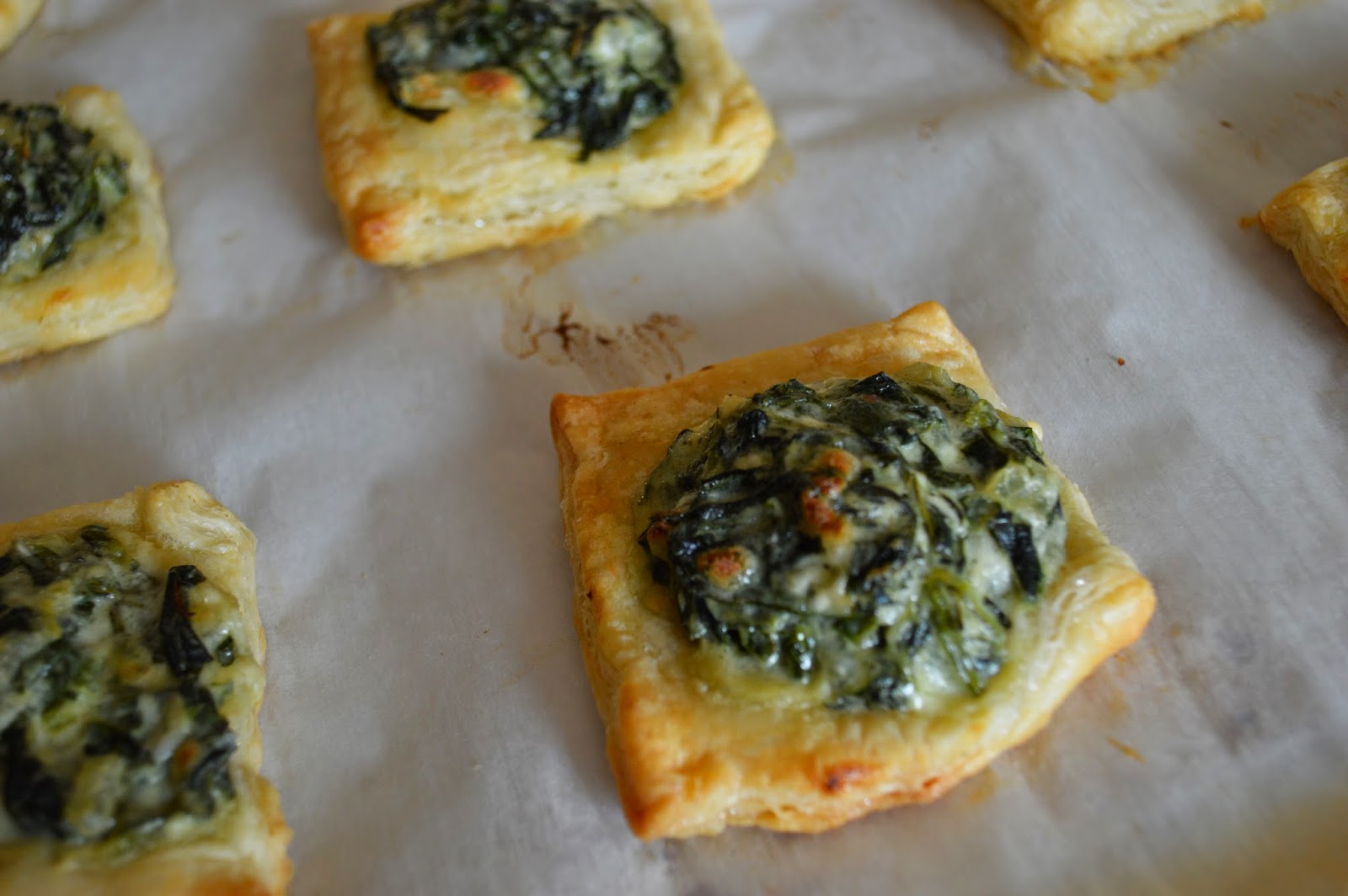 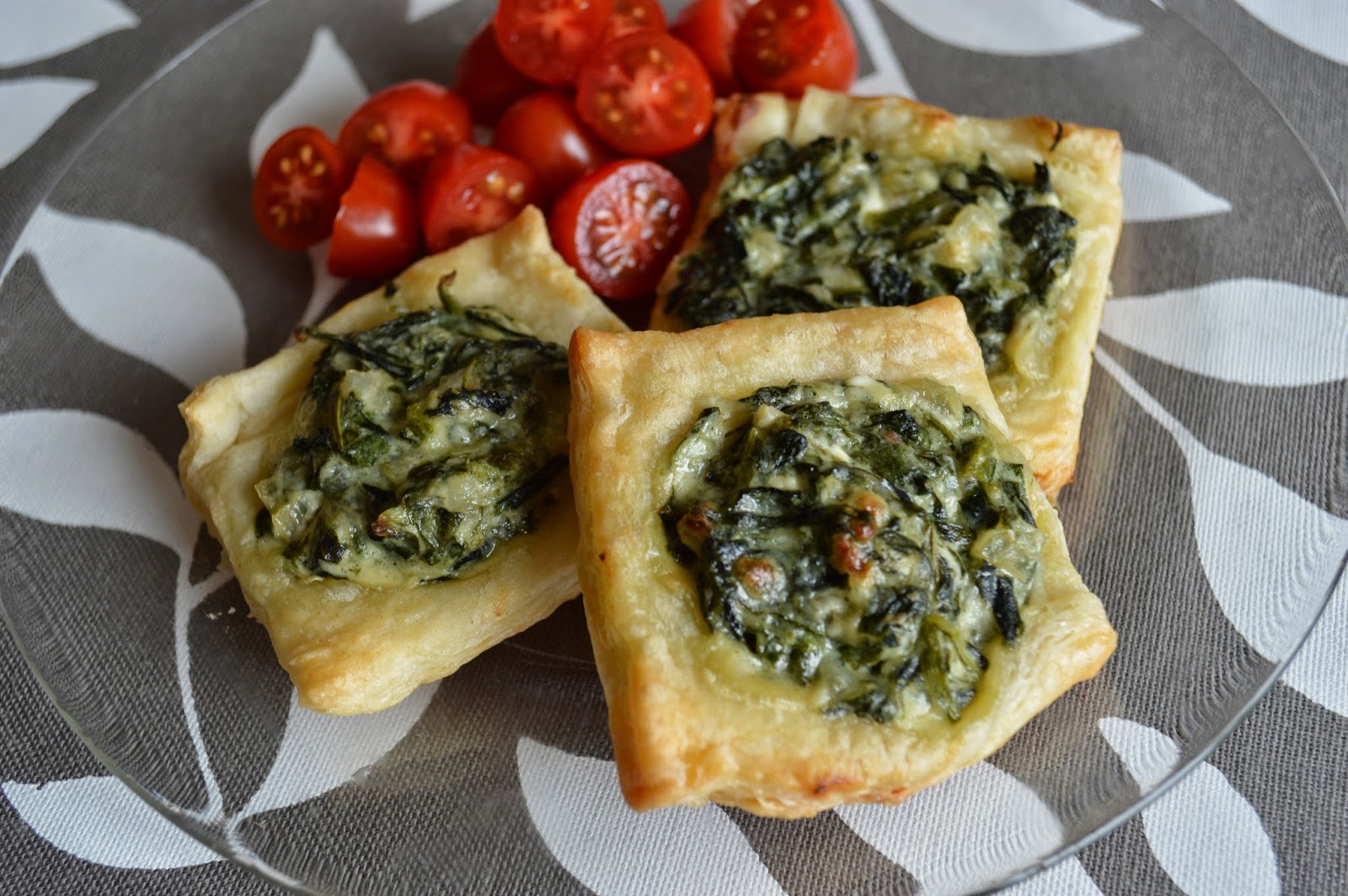 Want a change of pace with the same taste?  Leave the puff pastry sheet whole, cover 3/4ths the length with the spinach mix, then roll it, seal the edge well, and slice it into rounds.  Voila!  Pinwheels!

This one is all about potential.  Like mushrooms?  Saute some up with the onions and they will fit in to make a lovely mix.  Got some roasted tomatoes?  Go ahead and throw those in.  Spinach tomato heaven.  Want to top with some raw tuna?  Okay, that one might be not advisable.  But responsibly canned tuna?  Best tuna salad ever.

This recipe could probably be considered a double batch.  It made me enough to make the tartlets and still have about a half pint to snack on or save for later.  It probably would have been more than that, but I may or may not have oversampled.  What can I say?  It's good noshing!
Posted by Krasimom at 7:10 AM