Red, White, and Blue - A Zabaglione Love Story, and 4th of July Round-Up!

It's one of my favorite holidays, seriously.  Next to Thanksgiving, that is.  There's a pretty close race between the two.  But the Fourth of July holds many special memories and feelings for me.  My grandmother was born on the 4th of July, and this year will be celebrating her 90th birthday on that day.  The hubs celebrates his birthday less than a week later, so I always relate the holiday to him as well.  We have many special memories together out on a boat watching the fireworks, and the celebratory atmosphere filled with fun and love and food along with the intense sparkle of color seems like a fitting match for our relationship.  This year, I've finally attempted to make a dessert that also says a lot about us. 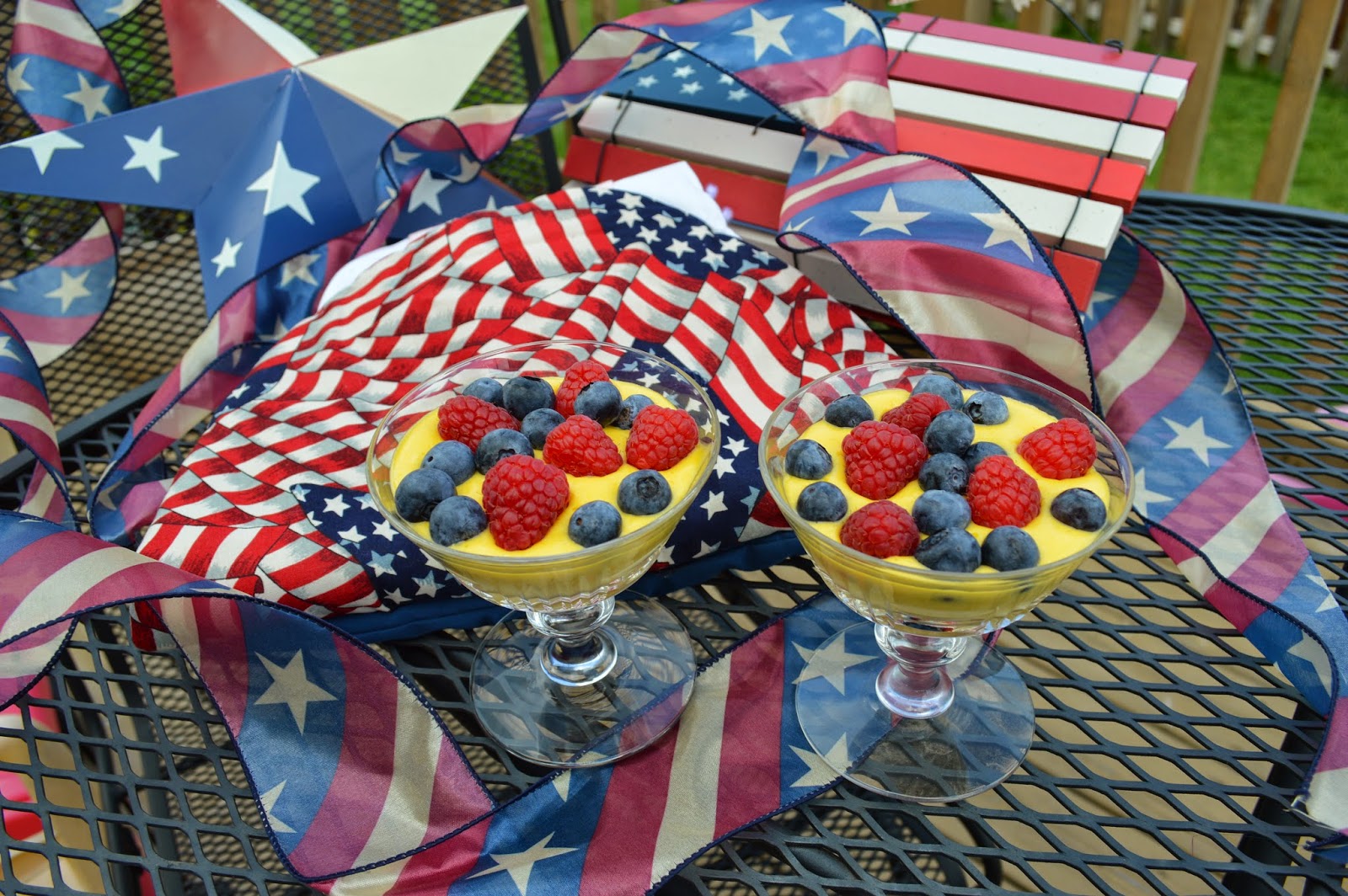 This one is more than just a recipe to me.  It's a love story.  My love story, to be precise.  Zabaglione played a critical role in how my life came to be what it is.

This past June, the hubs and I have been married for 12 years.  Which means that we've been a thing for over 16 years.  Which is pretty good, I think.  Especially considering we're still deeply in love with each other, even more so than we were back when we were those crazy kids.   These years have brought so many good times and so much laughter, but also a few arguments and spats along the way.  I feel blessed to know that the bad times have been sparse, and the great times more than plentiful.

When we were in college, there was a fantastic Italian restaurant a few miles from campus, and I was captured by the food there.  Everything they made was delicious, and the place was filled with tiny fairy lights.  It was like someone brought my inner happy place to life. The (future) hubs would take me there for special dates...if I had had a hard week of exams, if it had been a couple of weeks since we had seen each other, if I told him that I really wanted delicious Italian food...and every time, I would look over all the delicious desserts.  I'd pause at the tiramisu, which I know everyone thinks is the quintessential Italian dessert.  I'd linger at the cannoli, another traditional treat, with its crisp shell and sweet, creamy ricotta filling.  But, much like there was only one man for me since pretty much the moment I met my husband, at this restaurant, there was only one dessert for me: the zabaglione. 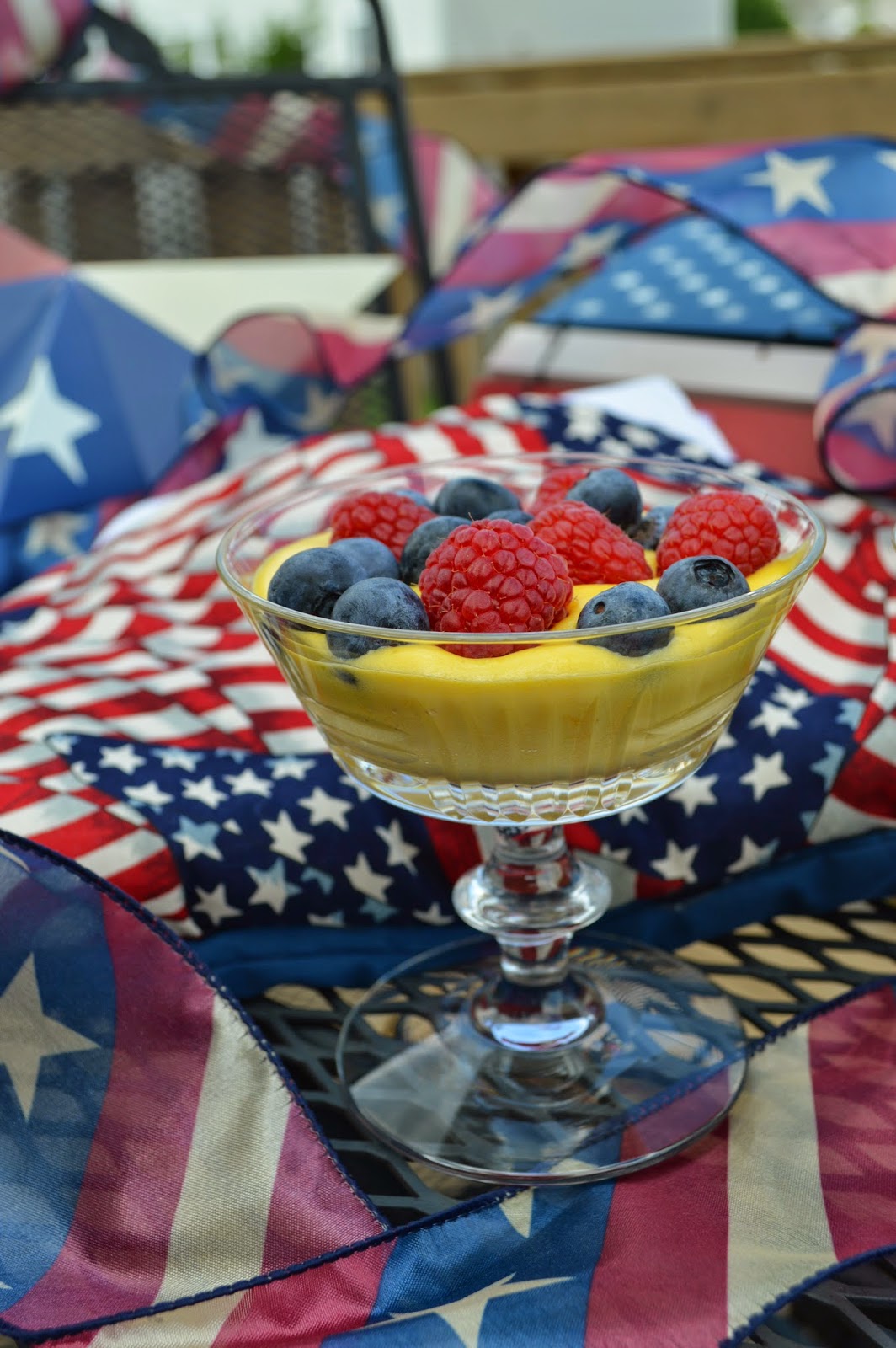 Zabaglione is a classic Italian custard-like dessert.  It truly fits what I think of as the Italian style: few, simple ingredients expertly combined and elevated to more than you would ever think they could achieve.  It is a creamy, rich, decadent dessert that, despite that richness, doesn't overwhelm you even when you have a stomach stuffed absolutely full of pasta and cheese and freshly cooked bread.  The restaurant served it in a martini glass with fresh fruit sprinkled on top, and I would have licked it clean if I could have. 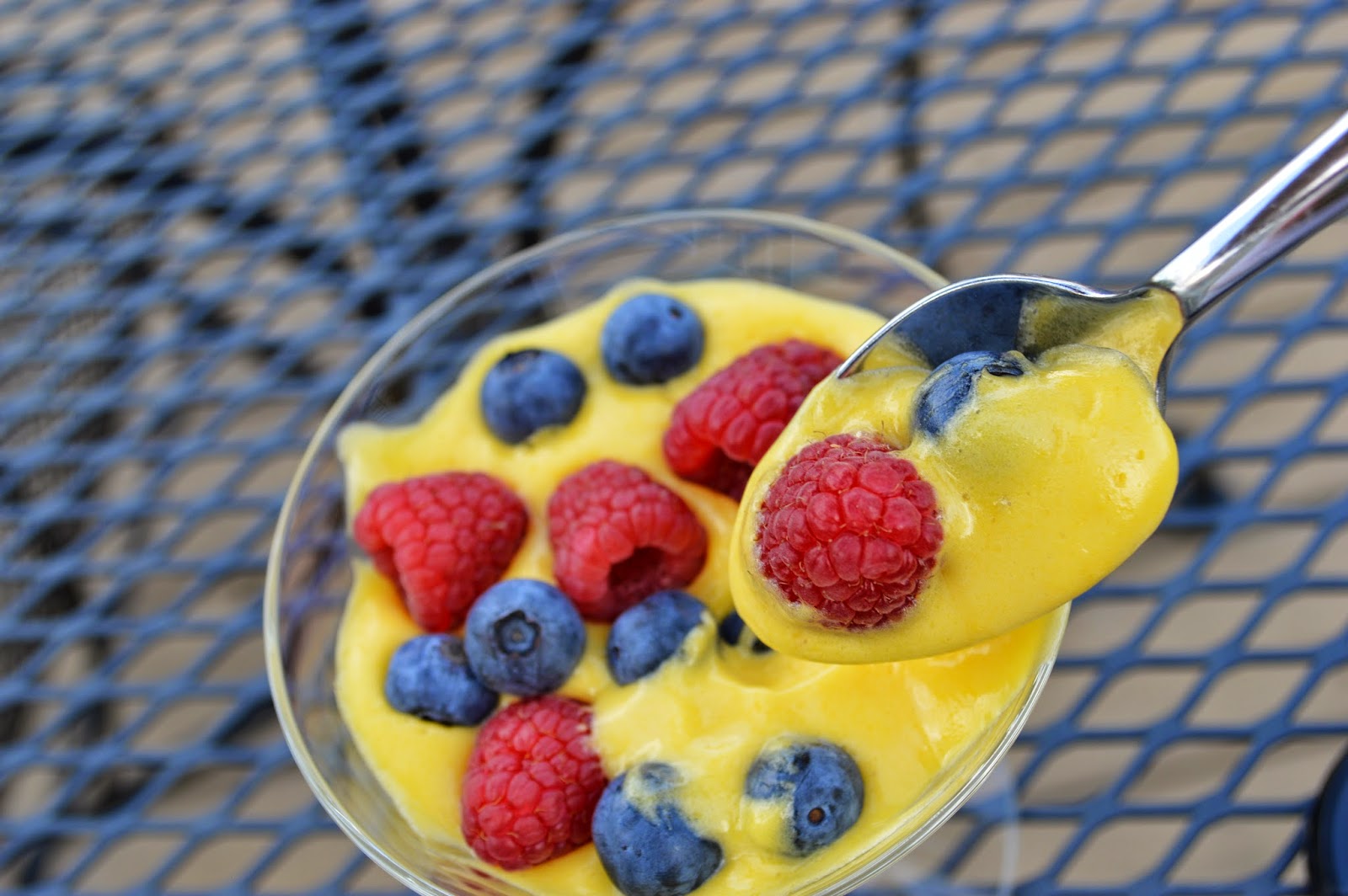 One night in particular, I had had an especially stressful week with exams and student teaching and being the R.A. for a floor of freshman girls, and the (future) hubs told me to make the reservations.  I didn't hesitate.  I needed this one badly.  All that ailed me, zabaglione could cure.

I figured that he must have had a stressful week as well, because instead of ordering some wine with me and sipping along as we vented about things, he ordered a Jack on the rocks, and pretty much slammed it back as much as you can do in a nice restaurant without seeming weird.

But then, after the plates were cleared and we had ordered the much-loved zabaglione, he completely caught me off-guard by getting down on one knee, taking out a box that he opened to show the most perfect ring for me, and asking me to marry him.  After I caught my breath and stopped shaking, I, of course, said yes.  And we celebrated with zabaglione. 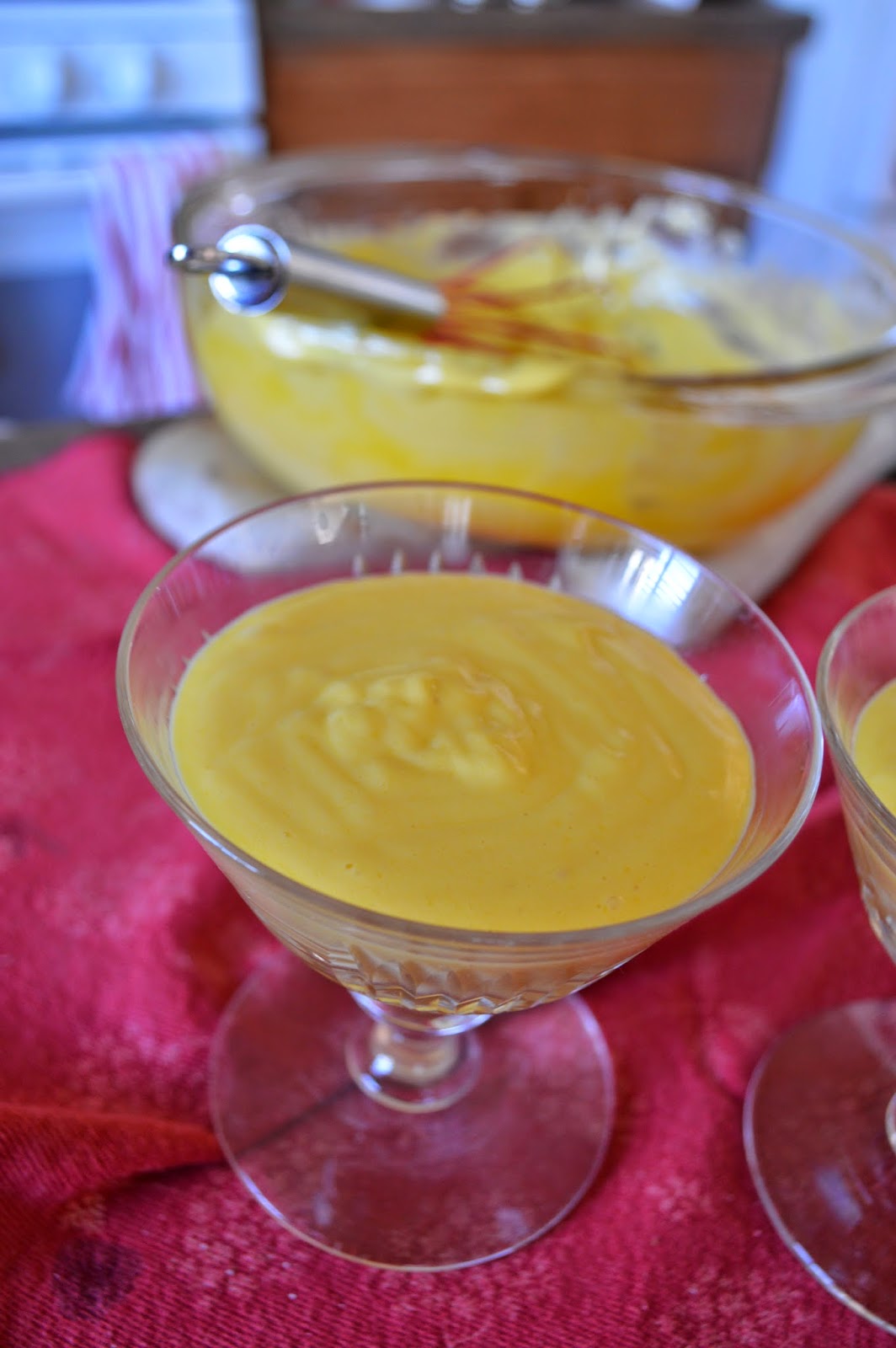 We still had to stop at the Kinkos afterwards, because hey, it was finals week!  But the guy behind the counter who bound my thesis acted very impressed when I flashed the ring at him and explained why I was so giddy.

Several years ago, I learned from a friend in the area that the restaurant we had loved so much had closed for good.  Honestly, I did cry a little, because I had always hoped to go back with our kids someday and let them experience the magical atmosphere.  But I can't fault the chef for moving on to bigger and better things than a magical little restaurant in an upscale strip mall in Peoria either.

I thought several times about making my own zabaglione, but I always hit a wall.  If it wasn't as perfect as I remembered, I would be crushed.  And most of the recipes I looked at called for marsala or limoncello, but I distinctly remembered the one I loved was made with the lovely almond flavor of amaretto.  And...what do you mean it's mainly made of eggs????  I am not a big fan of eggs.

It's been years since I last had zabaglione, but I still thought about it frequently.  And I had to face it, no one is going to start marketing zabaglione pudding cups.  Not that they would be any good if they did... So, it finally came to the time where I realized I had to take the leap.  That day was today. 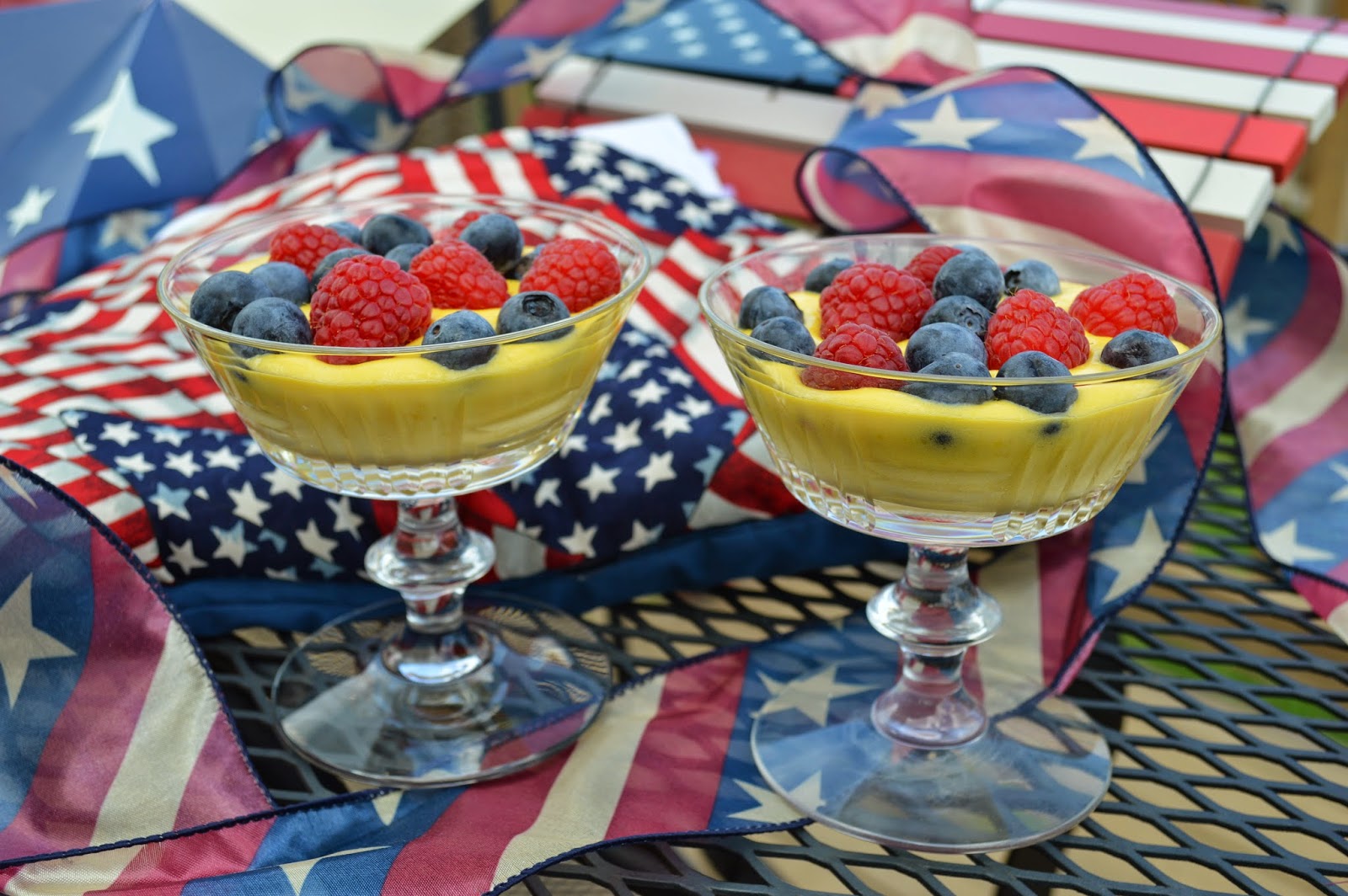 Heaven, just like I remembered.  Silky texture that coats your tongue with a rich, creamy sweetness, dotted with sweet-tart berries...

The hubs has been outside digging a hole for Mr. Picky's birthday in-ground basketball hoop in the 90 degree heat, trying to get it to 4 feet deep through rock and clay so that it's firmly below our frost line.  I walked out a spoonful to him, and I watched as his eyes lit up as I fed it to him.

With a twinkle in his eye, and a huge grin on his face: "Well?  What took you so long?"

There are only 3 ingredients: egg yolks, sugar, and a sweet liquor, like amaretto. 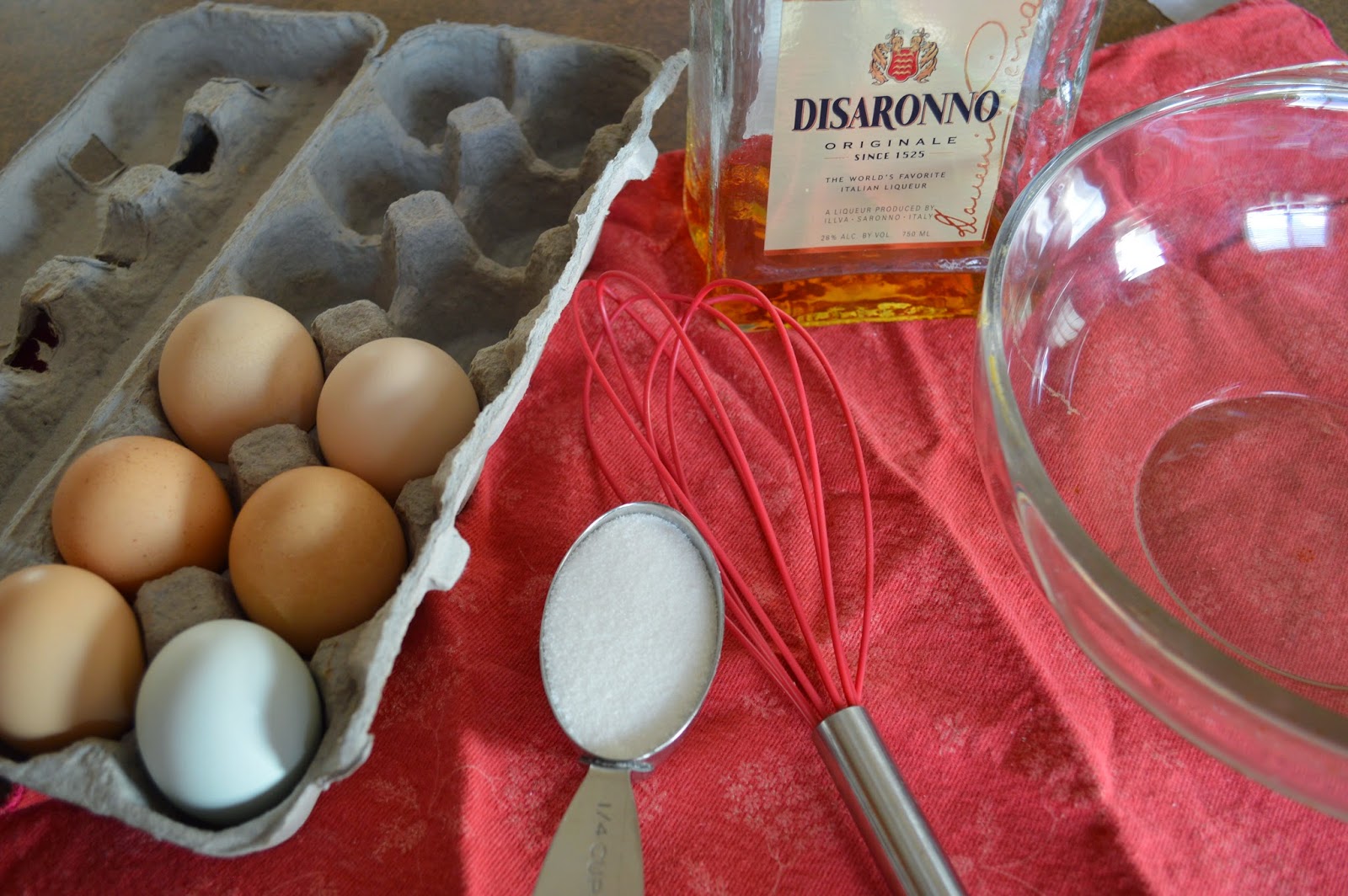 Find a glass bowl that will fit nicely over a large pot.  Fill the pot with about an inch of water, and set it on high heat to boil.

Separate the yolks out of 6 eggs.  Save the whites for another use. 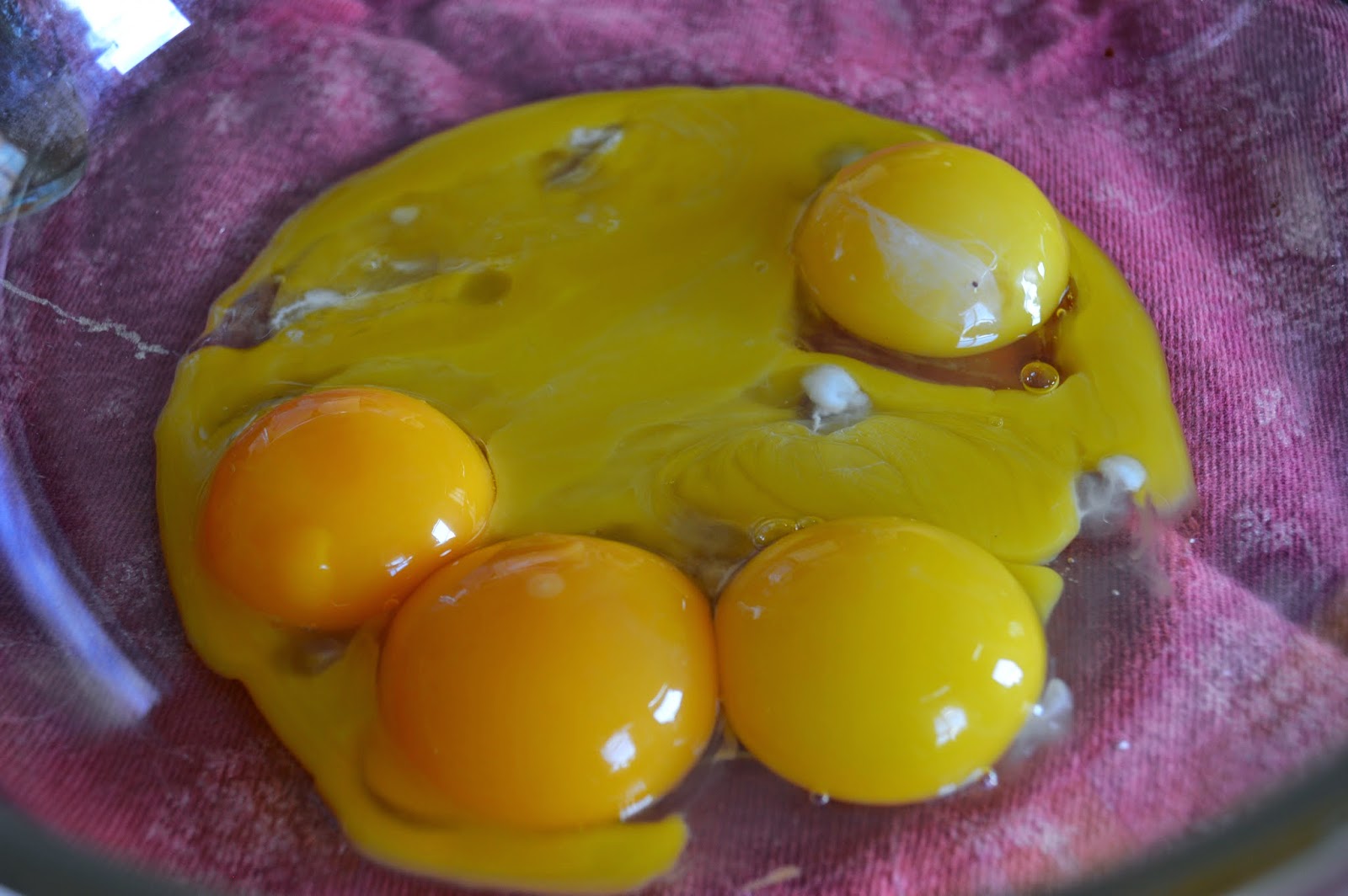 Put the yolks into the glass bowl and beat them a bit.  Then add in just under a quarter cup of sugar.  Beat it to mix it up. 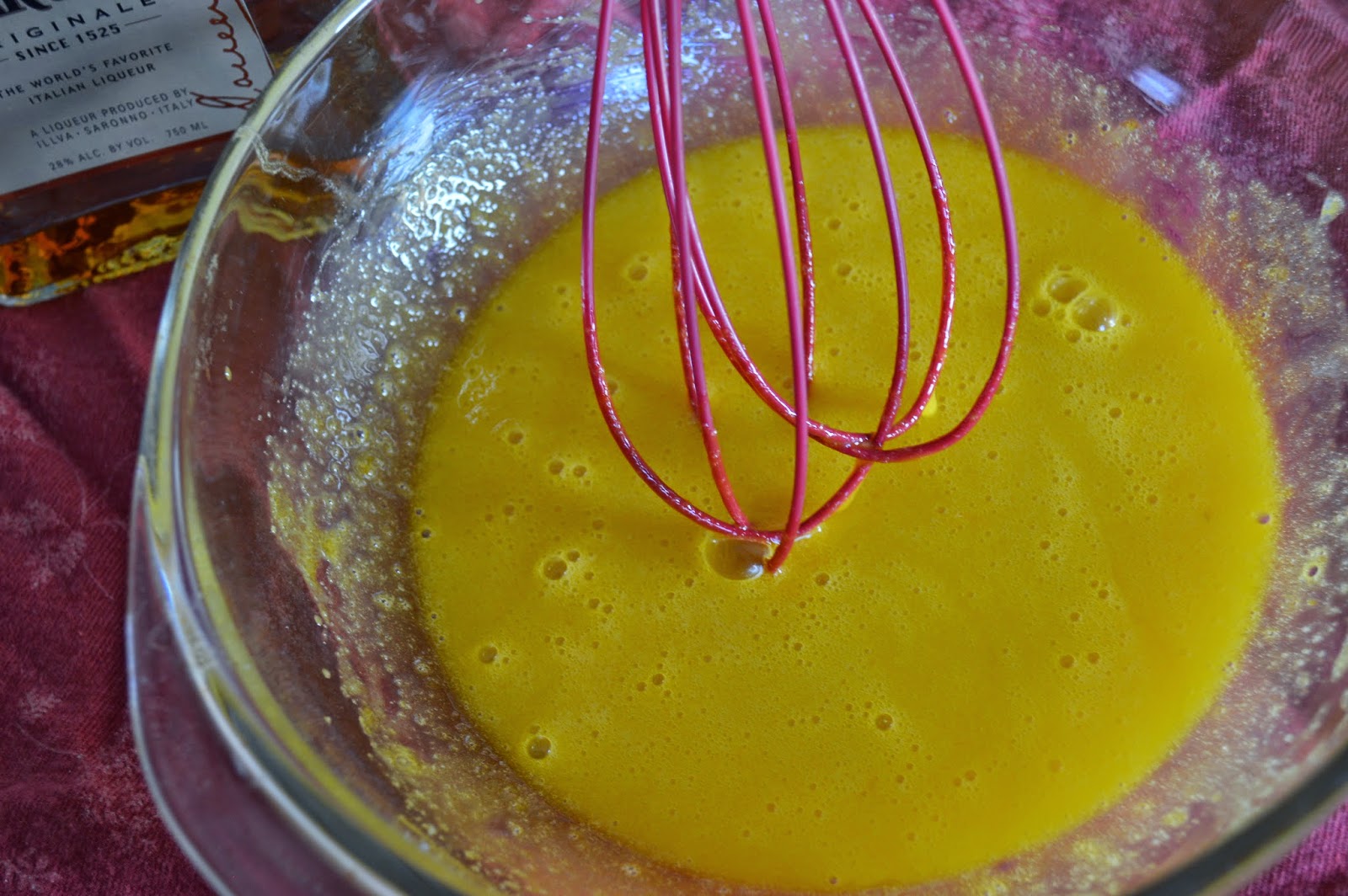 When it starts to froth a bit, and the sugar has started to dissolve, add in about a quarter cup of amaretto.  Keep beating until it is frothy and well-mixed.

Then, take the bowl carefully over the boiling water and keep whisking away.  You don't want the bowl to touch the water, and you want to keep an eye on your consistency and move the bowl up away from the heat for a while if it seems like it is cooking too quickly.  You don't want scrambled eggs! 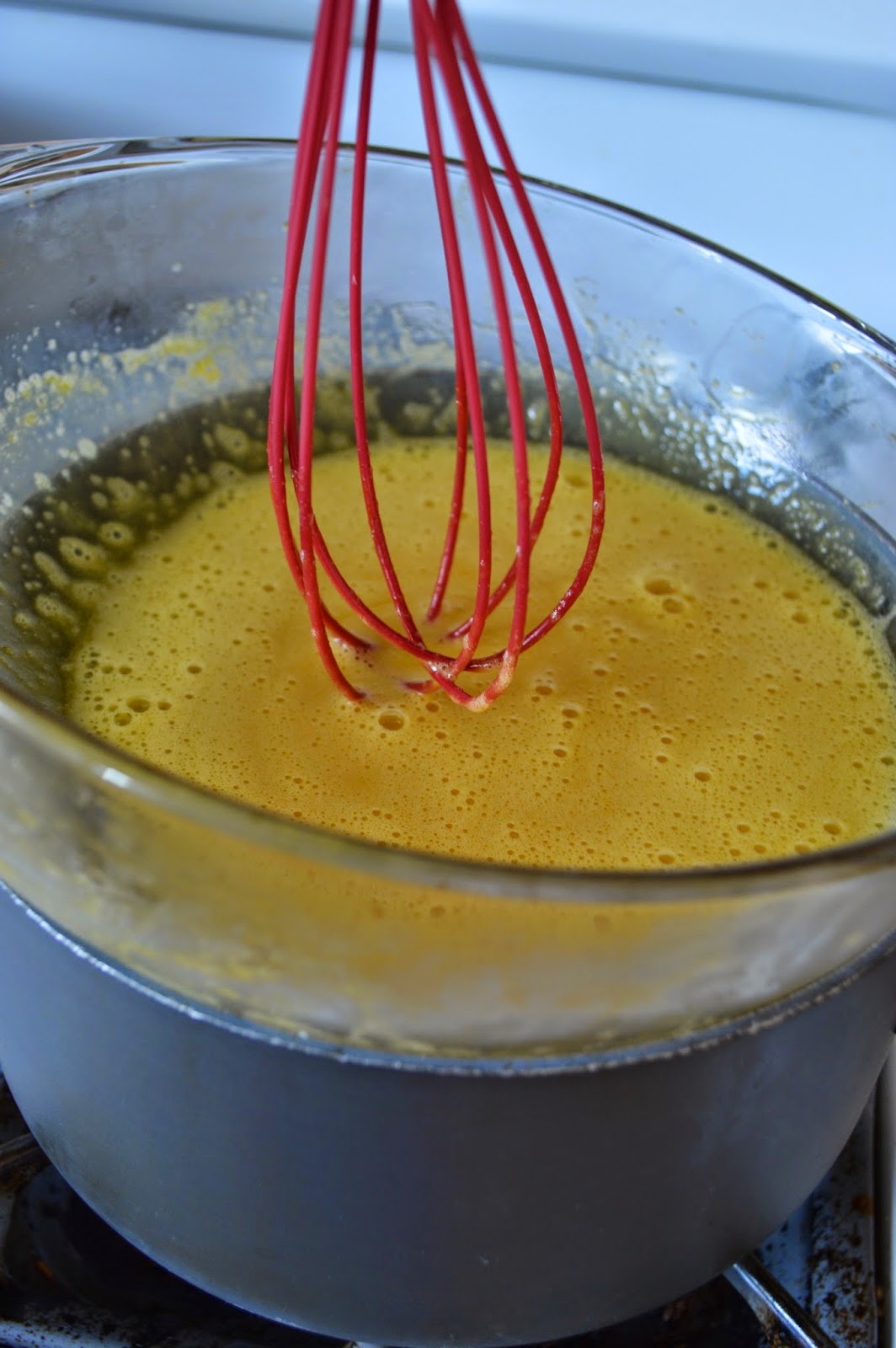 But the heat from the steam will fluff up your eggs into a custardy lightness that should drizzle easily yet still hold a bit when you run the whisk through it.  Take it off of the heat quickly once it thickens up. 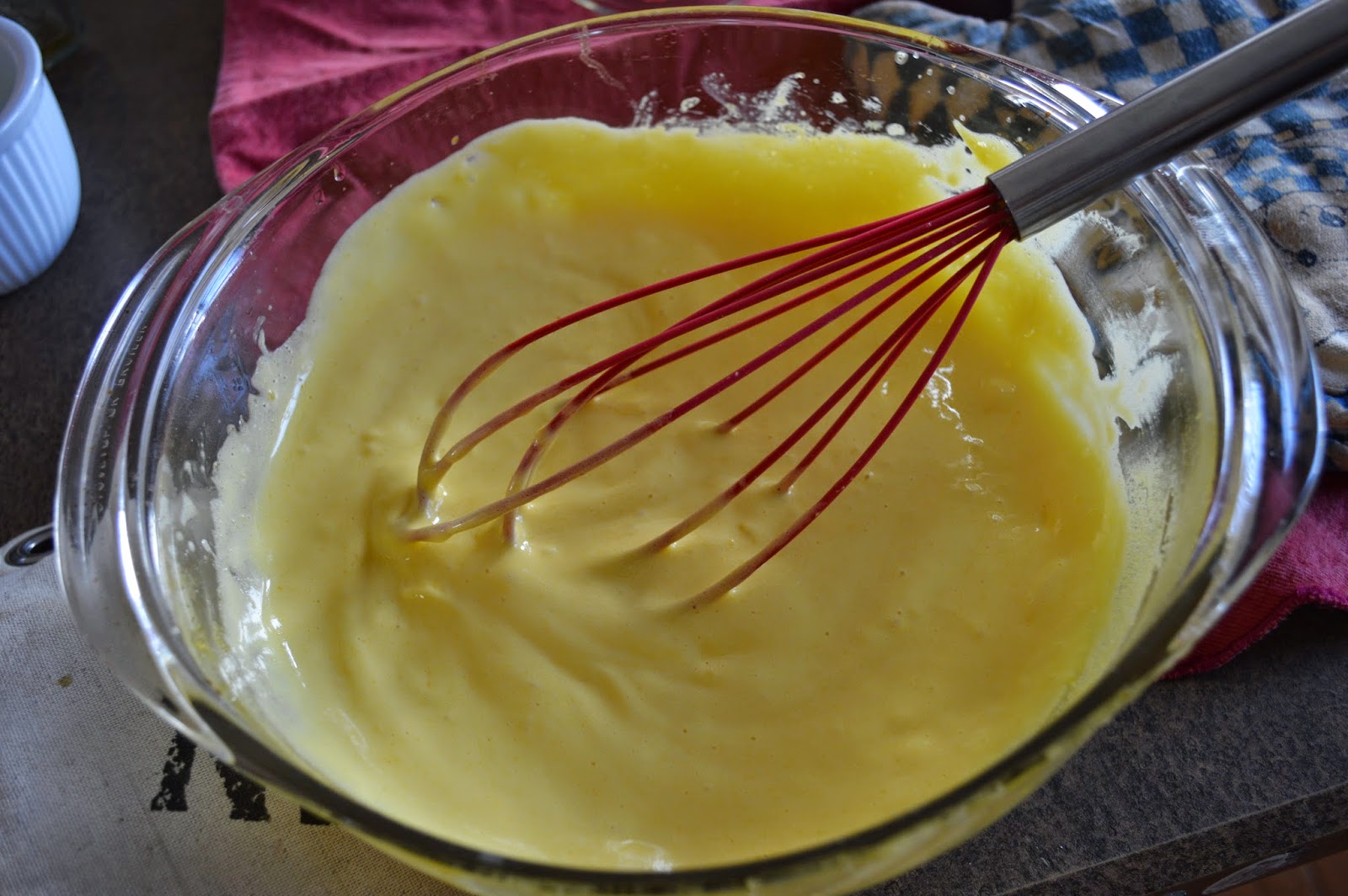 Pour it into small glasses or bowls, and then top with fresh berries.  Perfectly festive for the Fourth of July with blueberries and raspberries, but you could also go with all red berries for a Valentine's Day treat, or just top with whatever seasonal fresh fruits are around when the craving for this decadent lusciousness hits you. 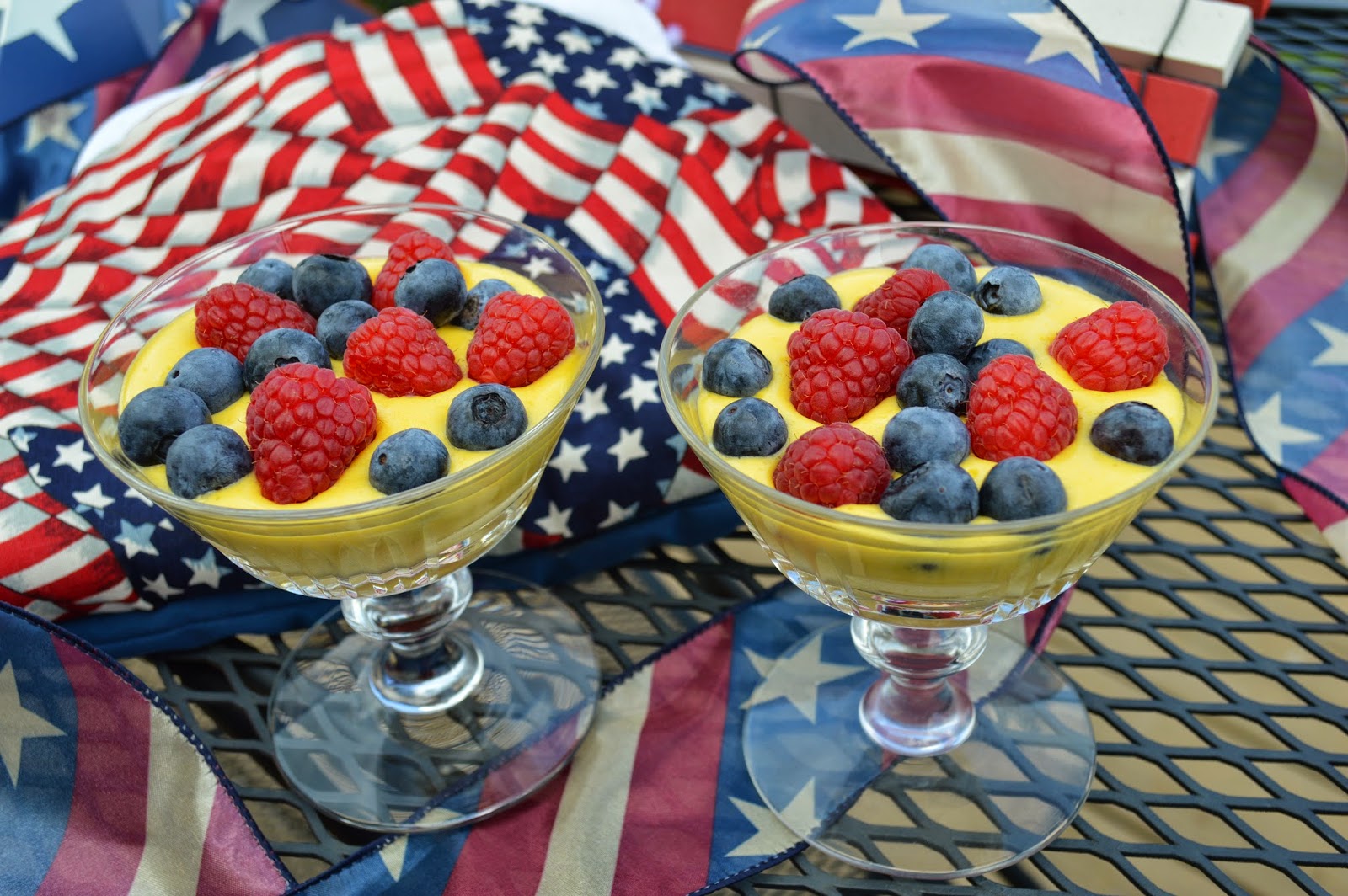 For me, it's like falling in love all over again.

For a fun video on how to make zabaglione, check out this video on Jamie Oliver's page.  Gennaro's accent is so much cooler than my stumbling and rambling.  But I'm telling you, try it with amaretto and you'll never want it any other way!

This post is part of the Foodelicious Fourth of July Round-Up - Be sure to check out the other wonderful and patriotic posts: 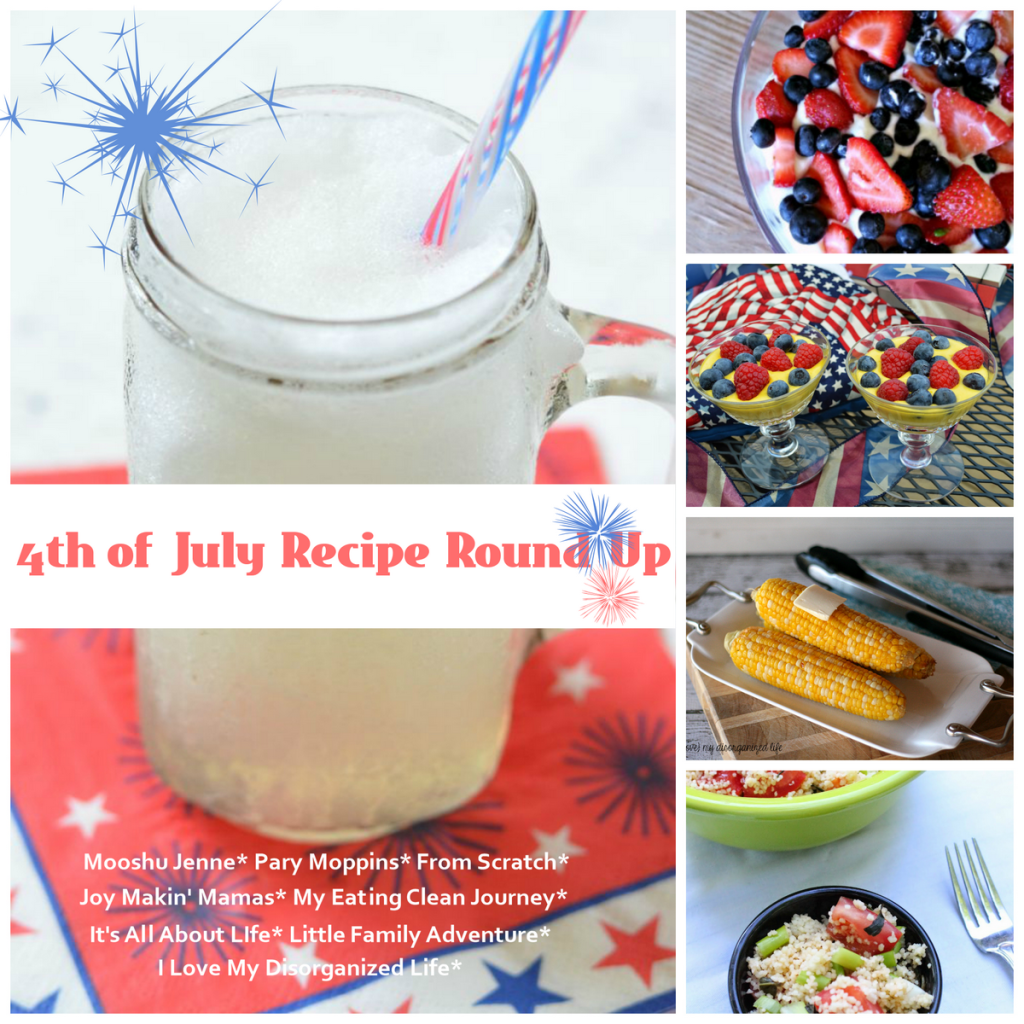 It's All About Life - Special Edition 4th of July Ideas

I Love My Disorganized Life - Grilled Sweet Corn on the Cob

Mooshu Jenne - Margarita's with a 4th of July Round Up