I am a total sucker for homemade angel food cake.  And lucky for me, the hubs is as well.  Angel food cake is one of those super-impressive-yet-not-impossible-to-make dishes that I love to whip out on a special occasion.  Like, say, a Thursday.  The week's worn you down, but you still have to get through more before the weekend...Thursdays should totally be angel food cake day. 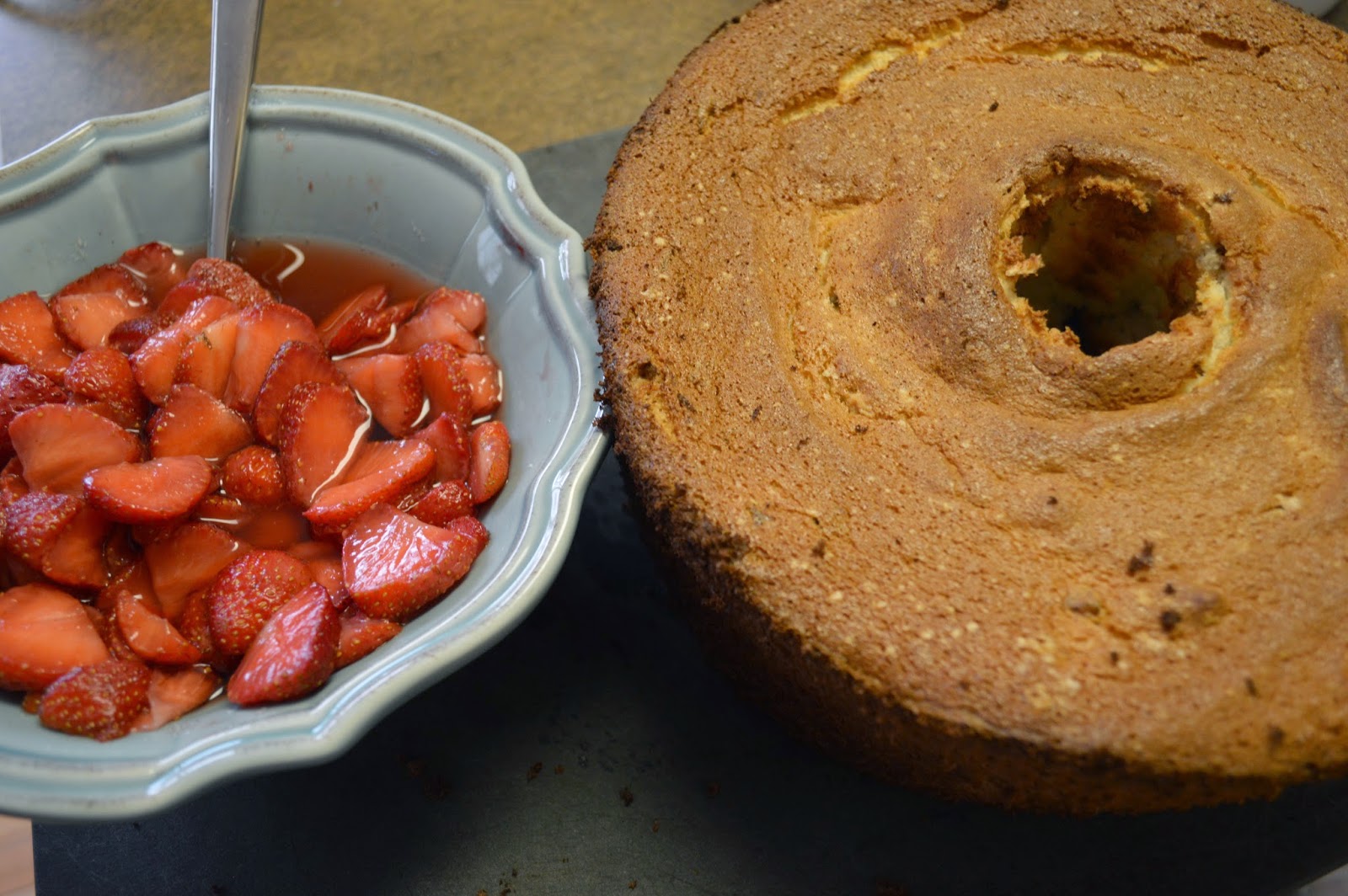 Probably the most intimidating thing about angel food cake is that it takes a dozen egg whites to make.  Yep.  You'll have to crack and properly separate a whole dozen.  All 12.  But, big picture, that's a small price to pay for the airy deliciousness you'll be enjoying in return for that work. 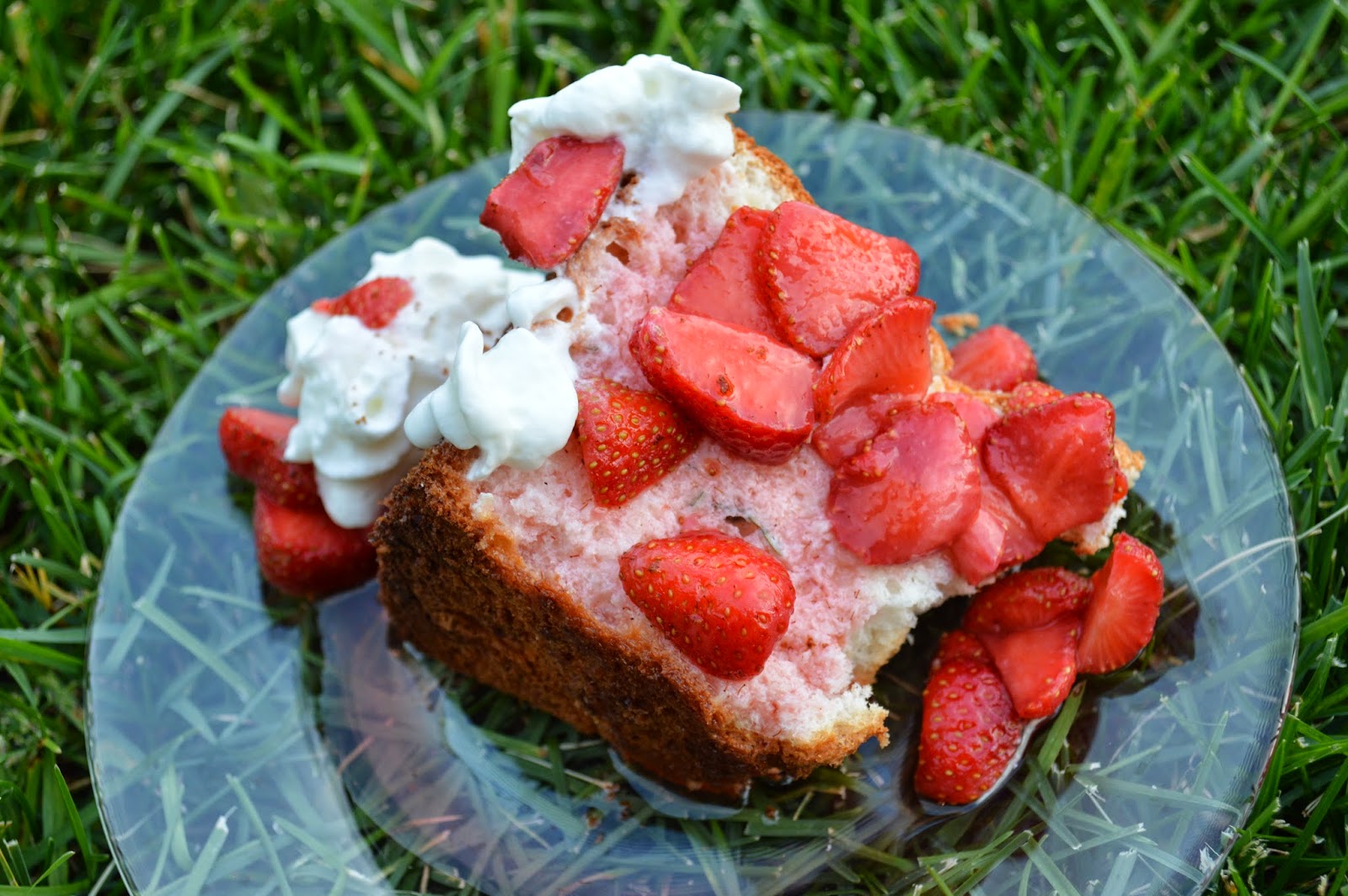 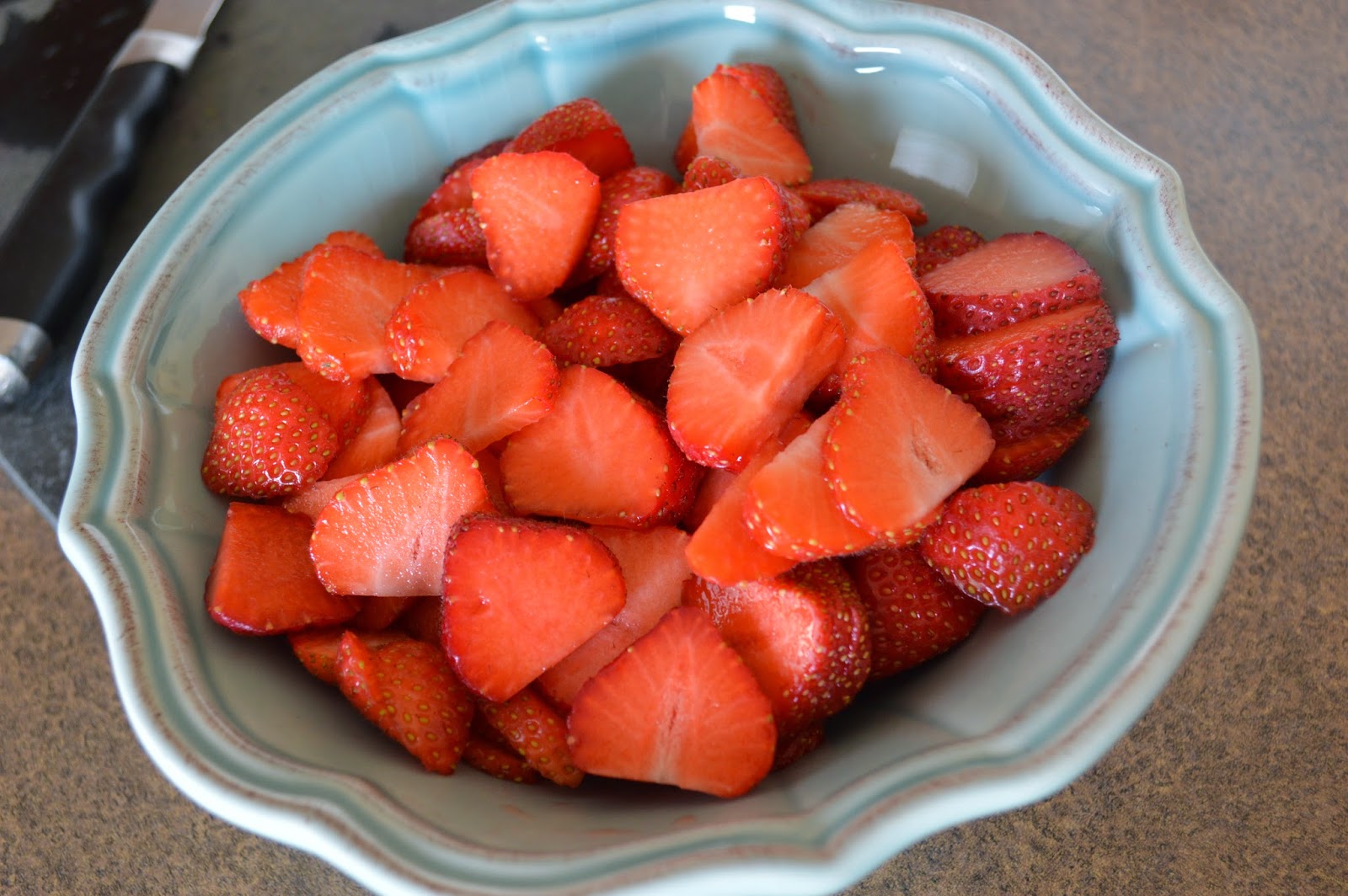 Slice some strawberries.  About 2 cups.  Toss them in a bowl with 2 tablespoons of sugar.  Let it sit.  Done. 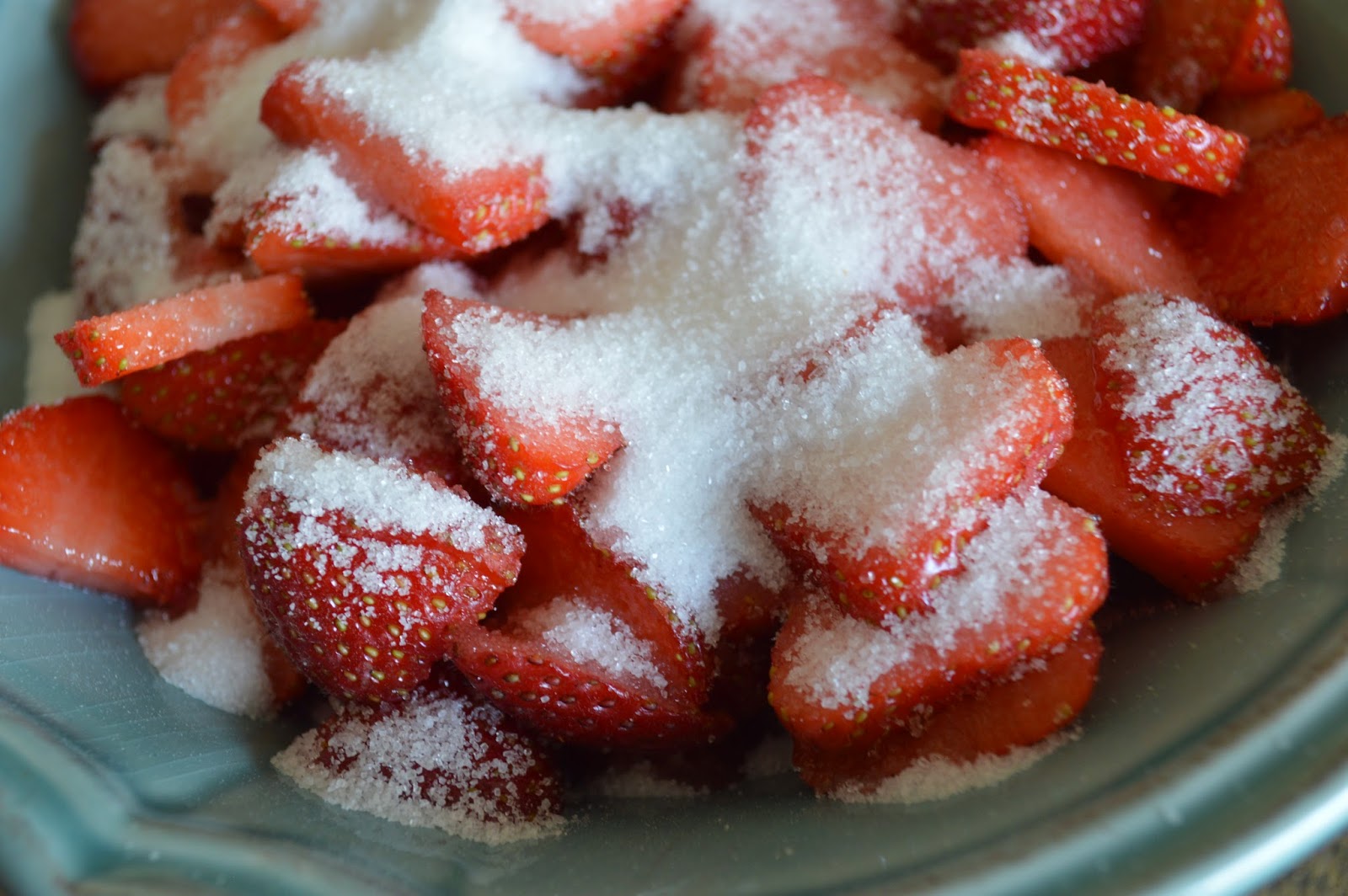 The sugar will draw out the juice of the berries, making it a syrupy puddle of softened strawberry brilliance.

Seriously, it's that easy.  Or, if, like me, you went overboard on the strawberry picking, save yourself some time on later treats and wash and slice the berries, then toss them in a freezer bag with a little sugar, and freeze.  When you thaw the bag, BOOM: strawberry sauce.

If you follow this blog much, you probably know that I have a thing for herbs.  Especially for using them in unexpected ways, like throwing a typically savory herb into a dessert.  One of my favorite combos is strawberries and basil.  I'm not sure why it works so well, but the basil somehow intensifies the berry flavor. 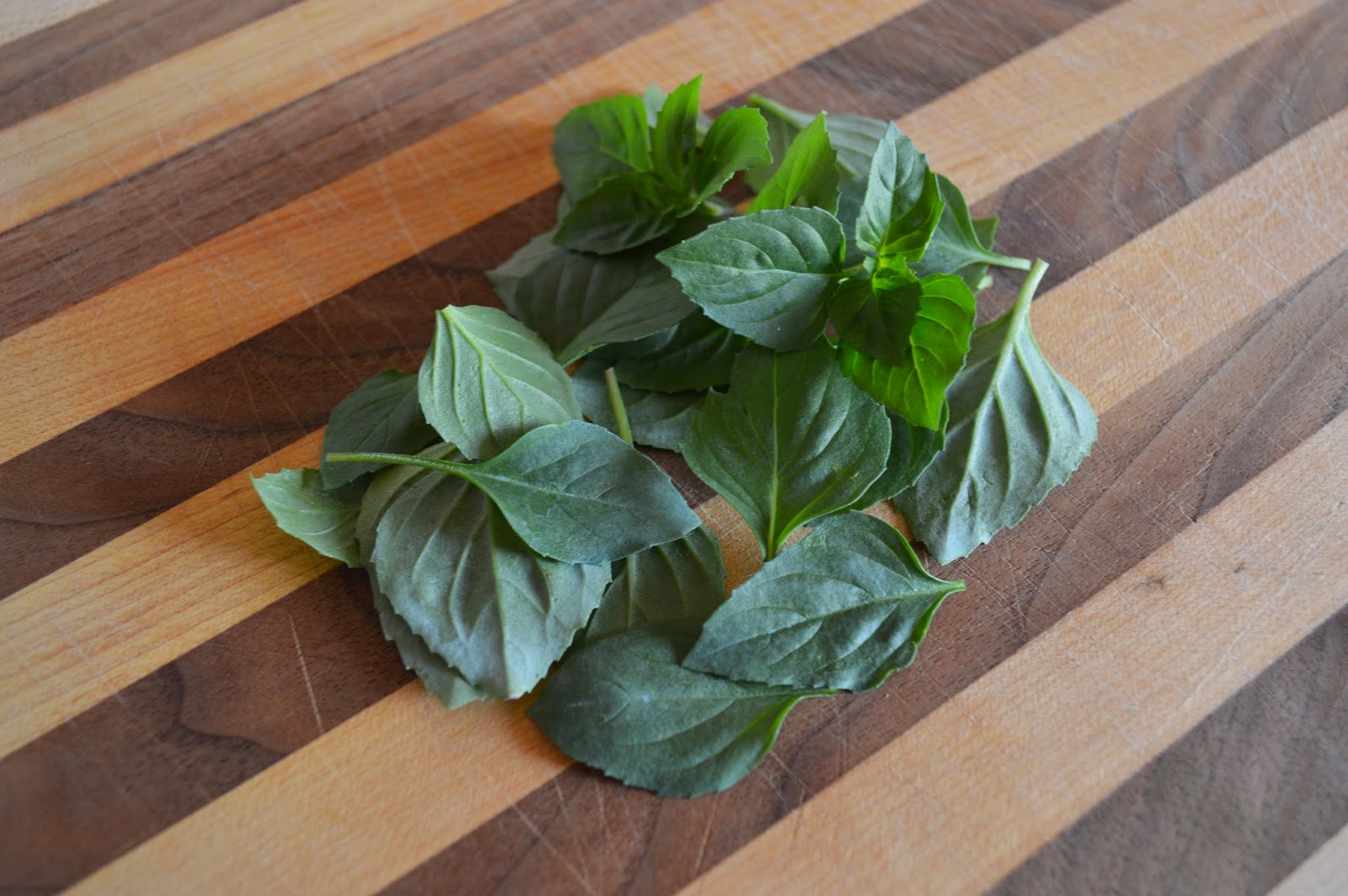 At first, I was thinking of throwing basil in with the berries to make the sauce, which still would be pretty tasty.  But I decided instead to throw the basil into the angel food cake, giving it a zing on its own, even if you decide to skip the berries.  Which, after working with 54 pounds of them, I am much more likely to do.

So, preheat your oven to 375 Fahrenheit.  Get a tube pan, and make sure that it is clean and dry.  You don't want to grease a pan for angel food cake, because you want the batter to climb up the sides and grip a little to help it lift.

Separate that dozen eggs.  Save the yolks for another use.  Put the whites into a large mixing bowl. 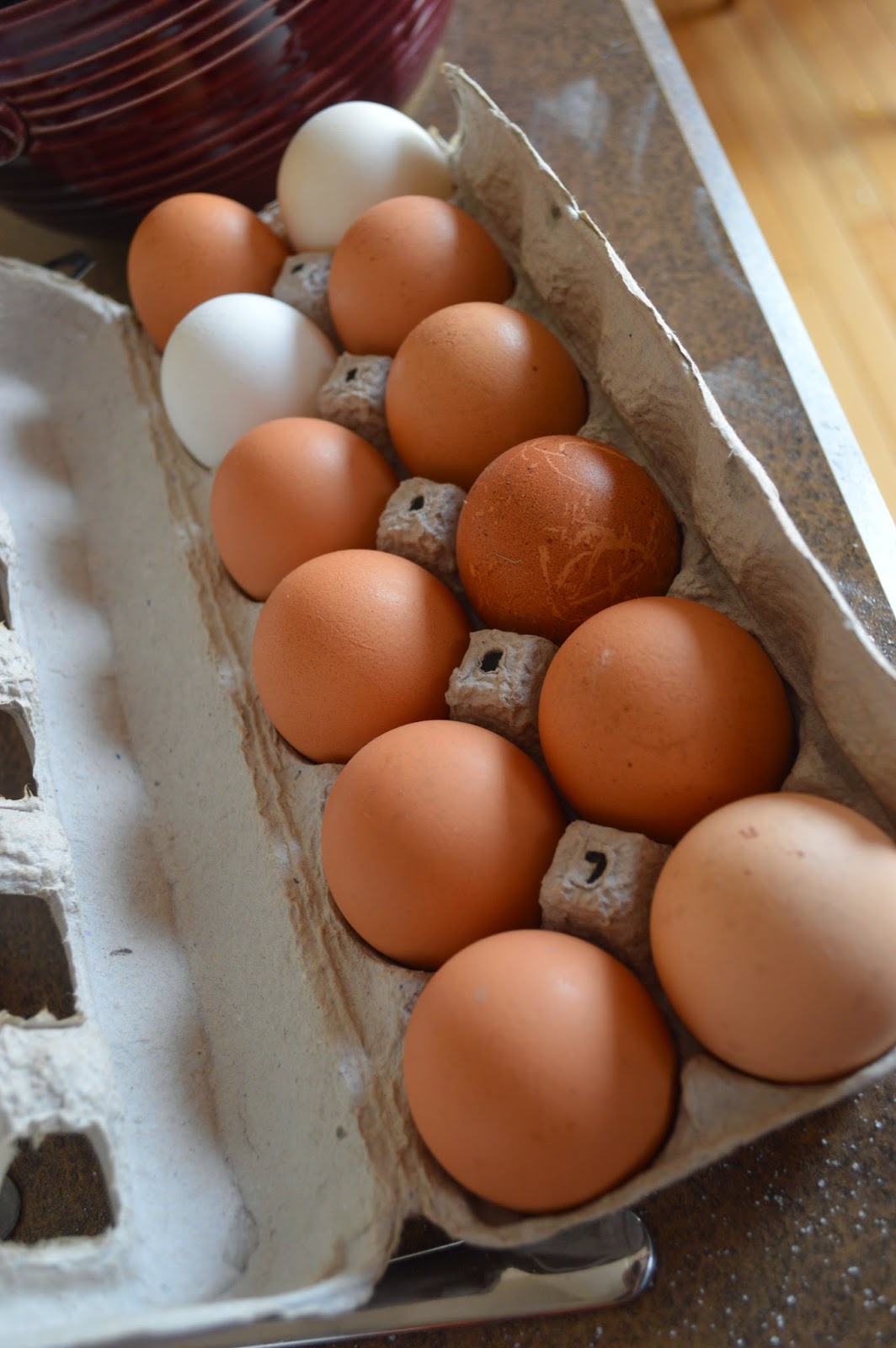 In a different bowl of measuring cup, take a cup of flour and sift it several times.  Again, I know it's not the most fun you'll have in the kitchen, but totally worth it for the end product.  You can also skip that by using a cup of cake flour, but I never have that around, so I go the sift, sift, sift route.

Don't put your sifter away yet...the next step is to sift the flour one last time with 3/4 cup of sugar. 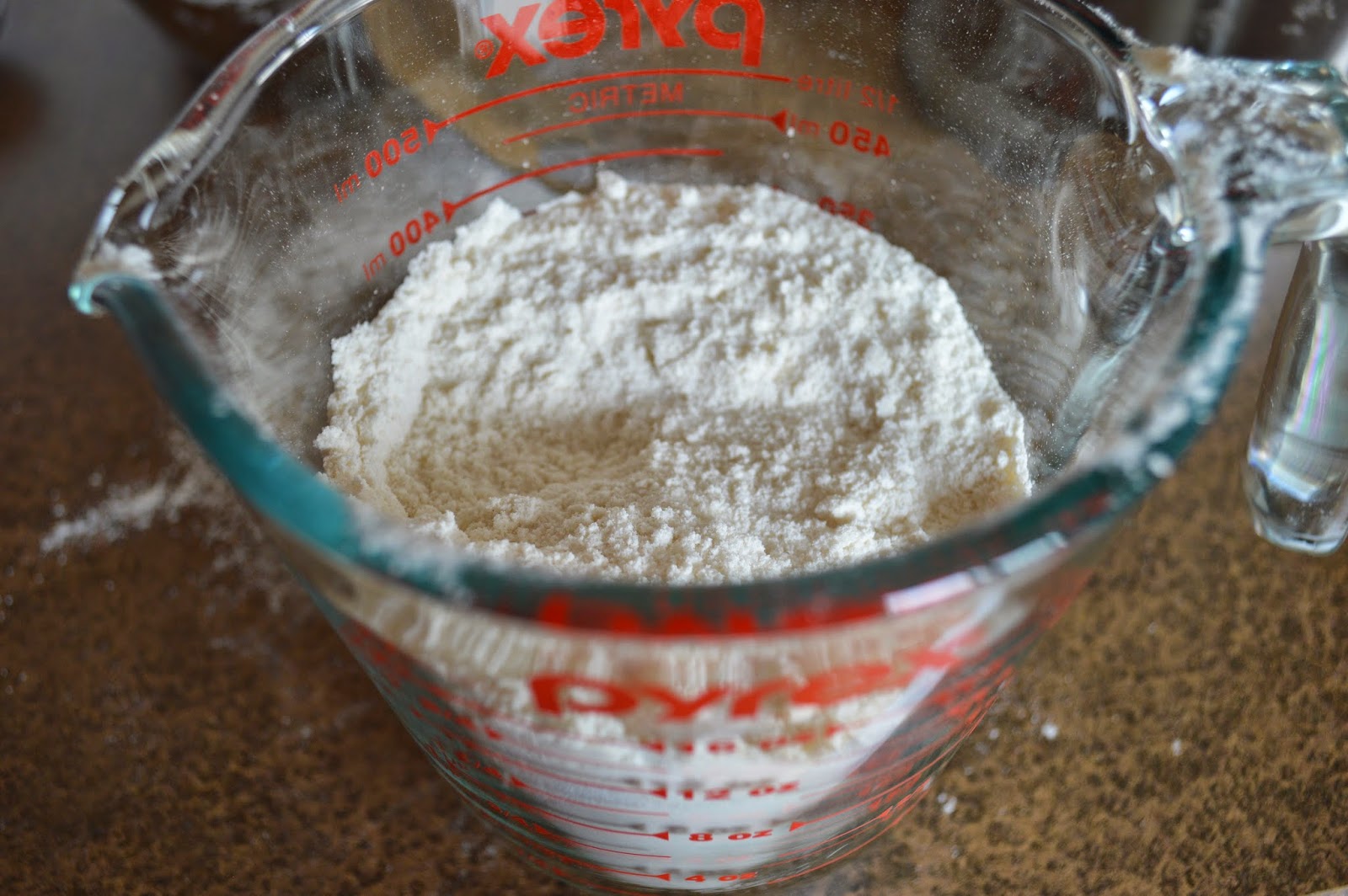 Thinly slice a bunch of basil.  You want around a quarter cup total once it's in small, thin, pieces.  Toss that on top of the flour/sugar mixture.  Don't sift it. 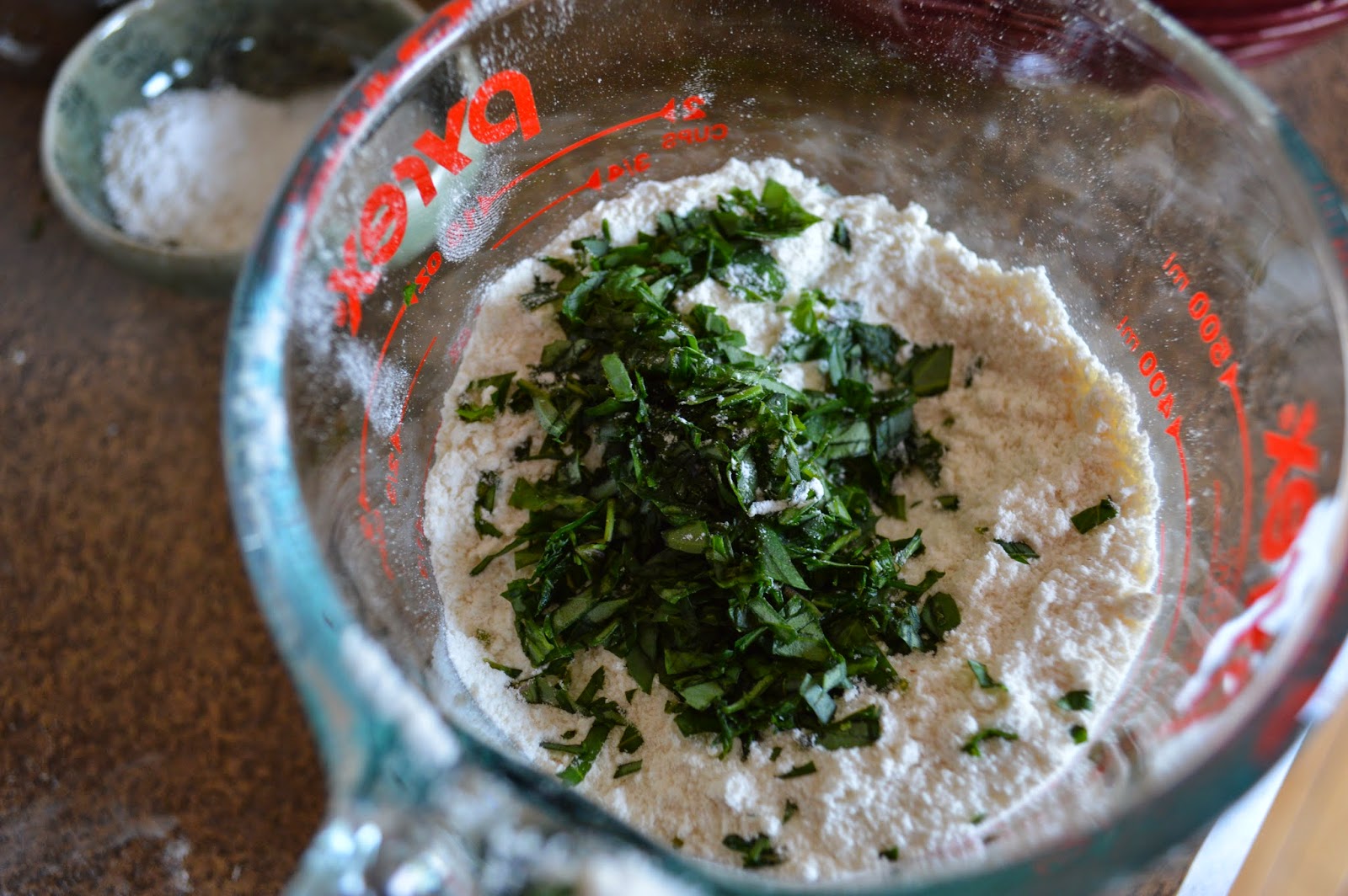 In a teeny tiny bowl, mix 1 1/2 teaspoons cream of tartar and 1/2 teaspoon of salt.  To be honest, this step may not be completely necessary on its own, but I just got a set with this lovely little handmade bowl from Aurora Rose, and I just had to show it off a bit. 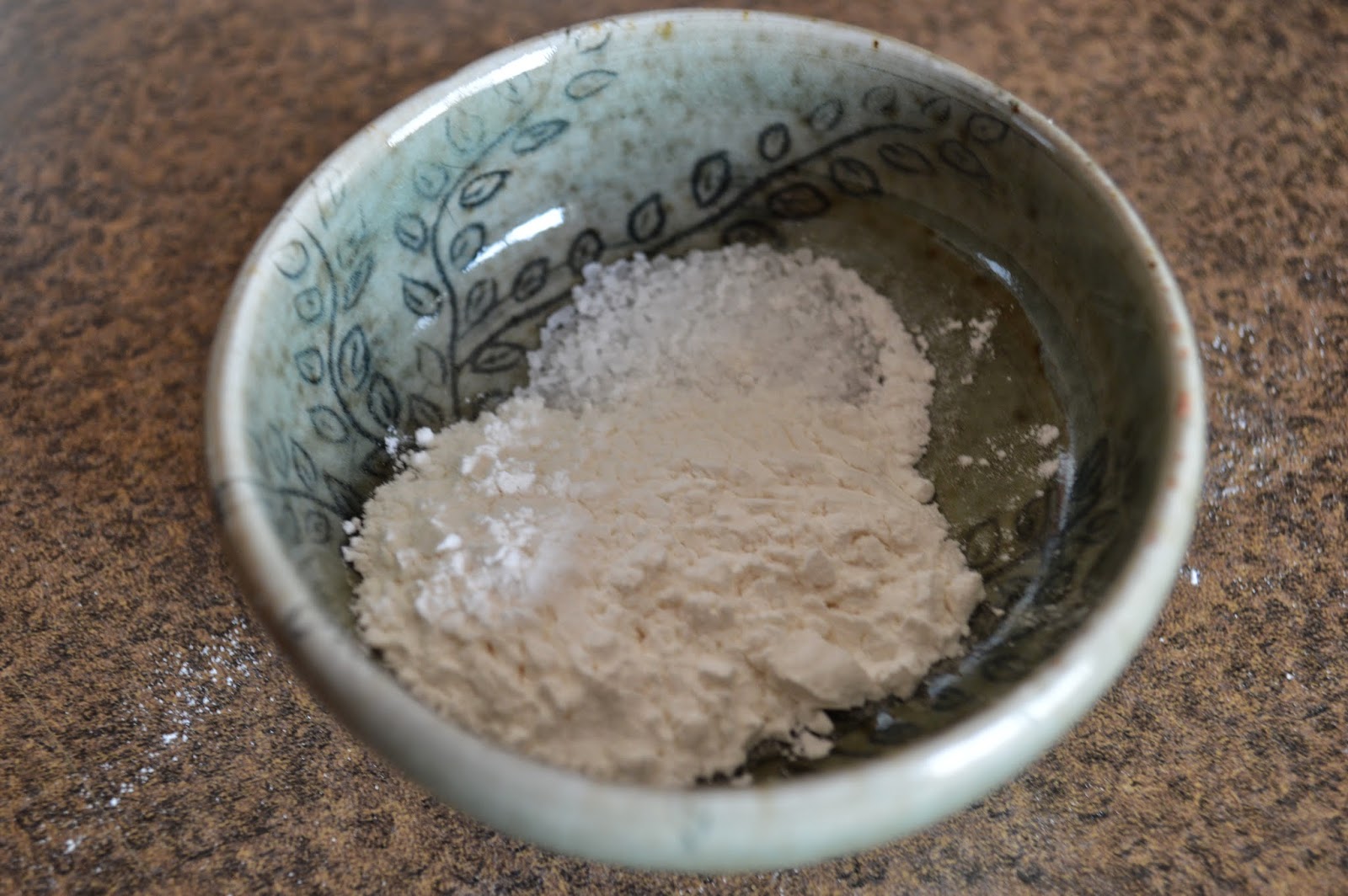 Turn to the egg whites.  Start whipping them and add in a teaspoon of vanilla extract and the cream of tartar/salt blend.  Keep whipping them until the peaks are just about able to stand on their own, then whip in 3/4 cup of sugar. 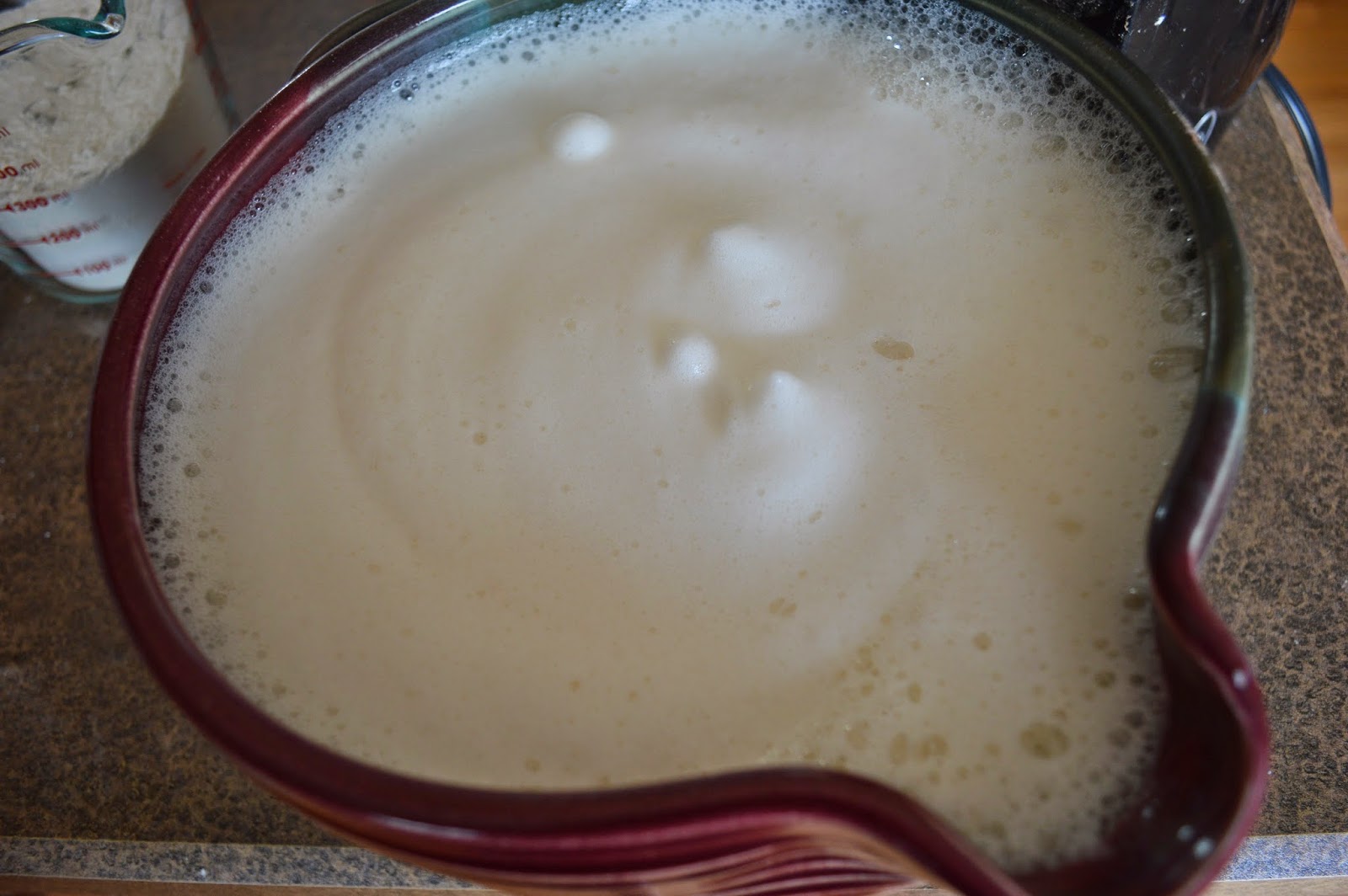 Whip to stiff peaks, where they stand up straight when you pull up a beater.  Be careful not to over-whip, or else they'll start to separate, and will be very disappointing.  Honestly, over-beaten egg whites have actually brought me to tears before.  You don't want all that work to be wasted! 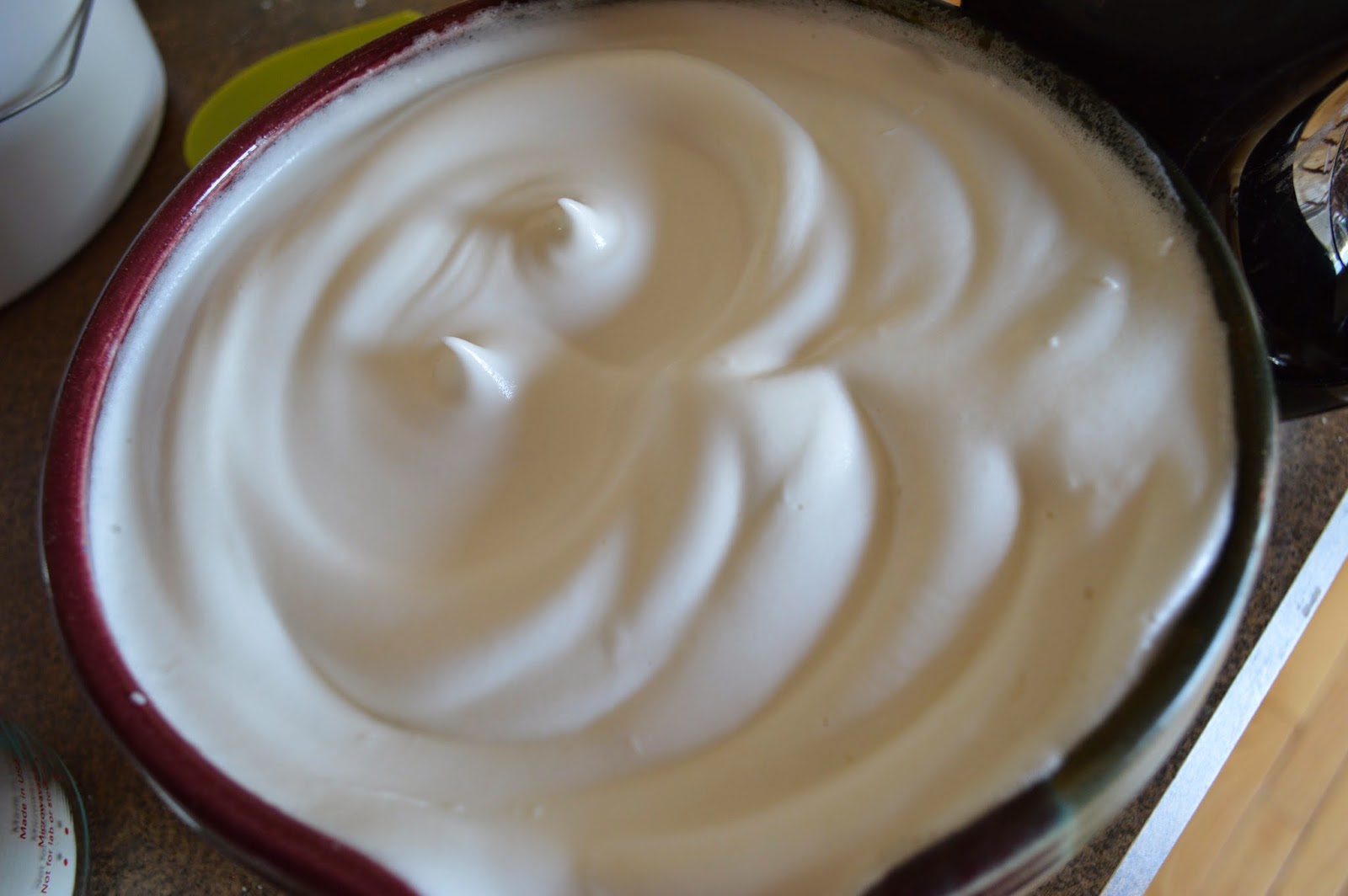 Step away from the mixer.  Gently fold in the flour/sugar/basil mixture a little at a time.  Put in about a third of the mixture each addition.  Don't over-stir, just make sure the flour is incorporated and there are no dry spots. 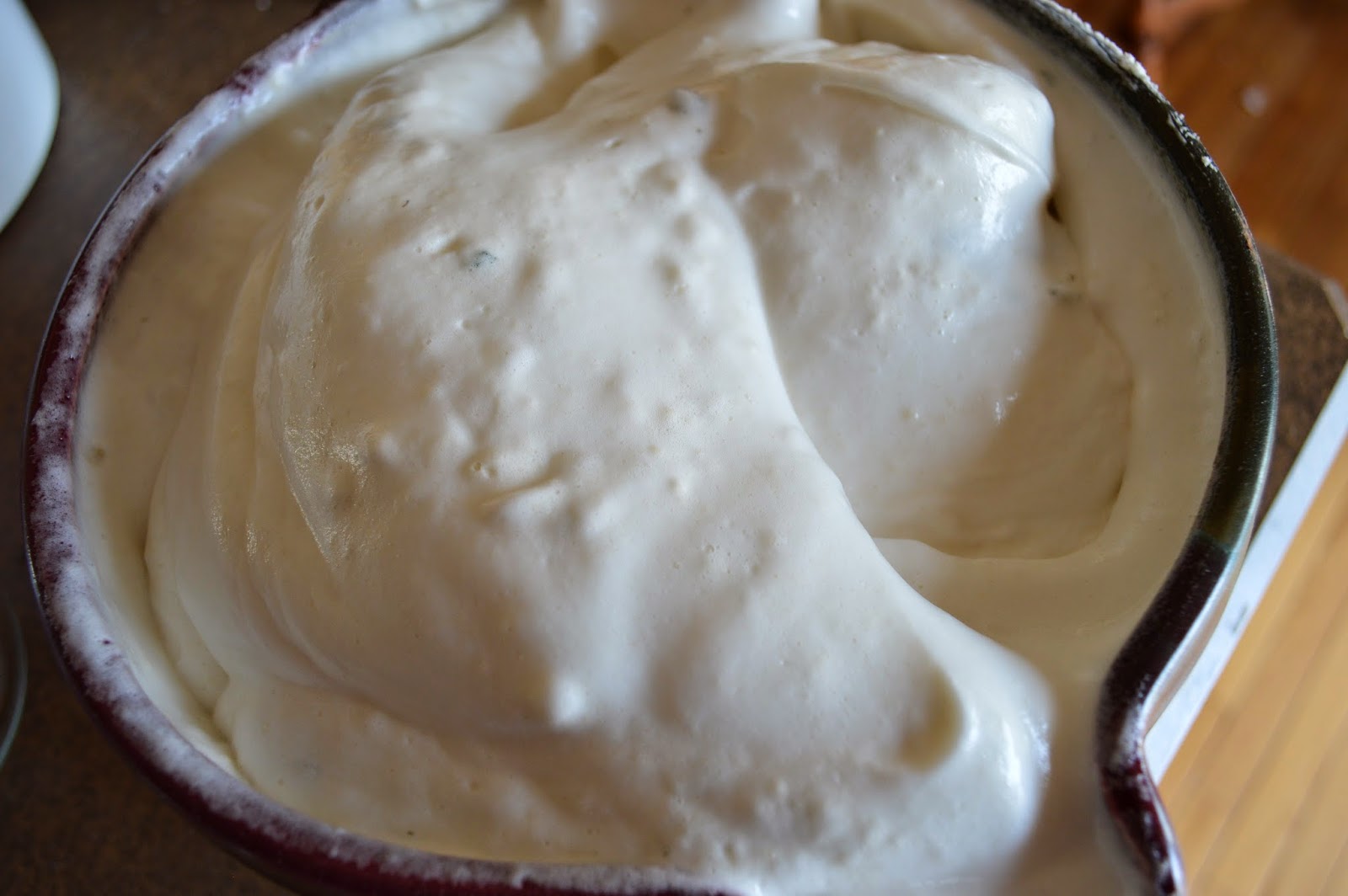 Pour it into the clean, dry pan. 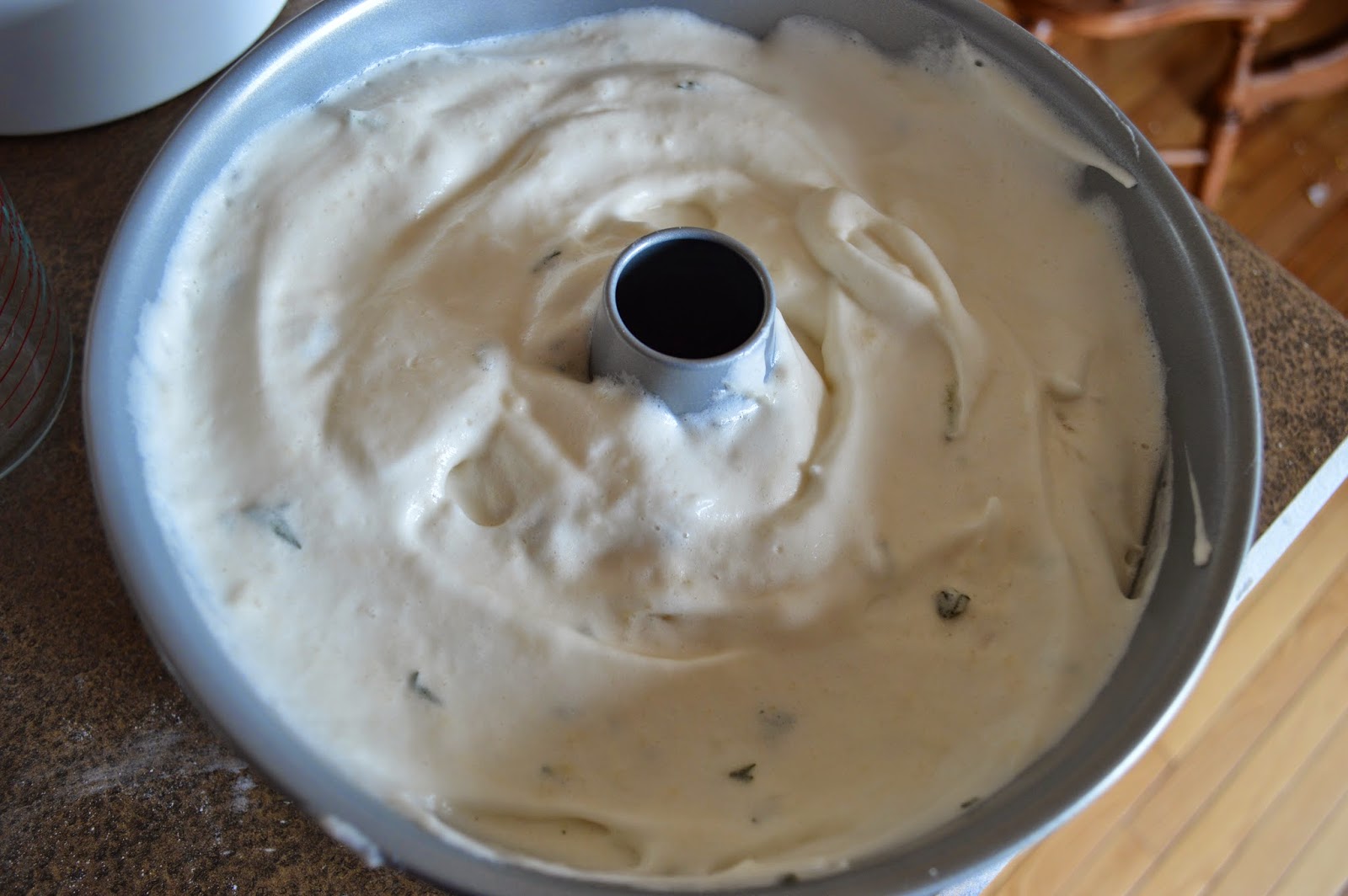 Pop it into the oven for about 35-40 minutes, until the cake is browned and springy to the touch. 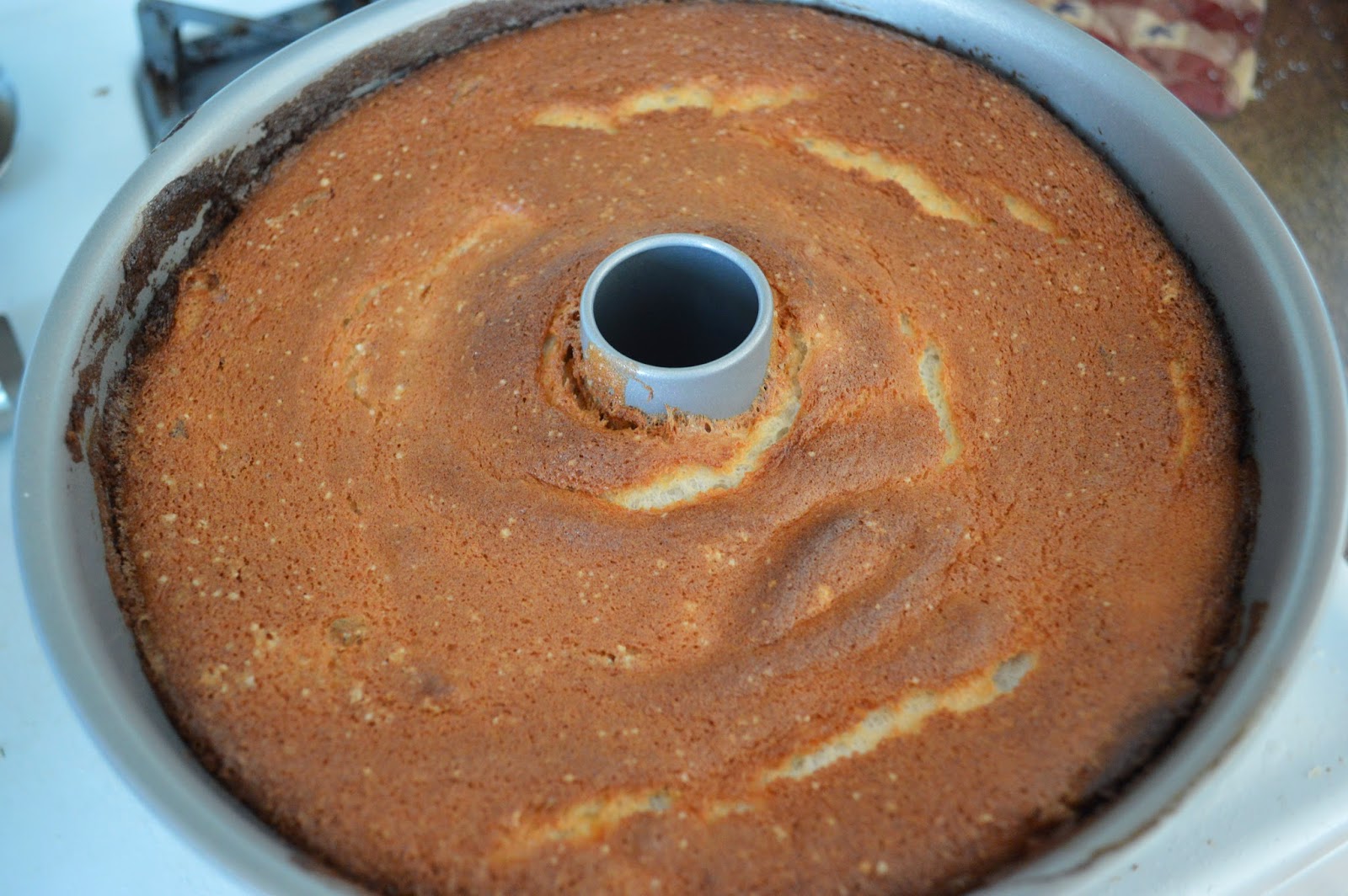 Invert the cake in the pan on a glass bottle to cool.  Yes, it looks snazzy, but it also serves a purpose.  If you were to cool it right side up, the cake would be more dense under its own weight.  If you were to invert it but place it directly on a surface, it would create too much moisture.  Making your cake the star of its own balancing act is the way to go here. 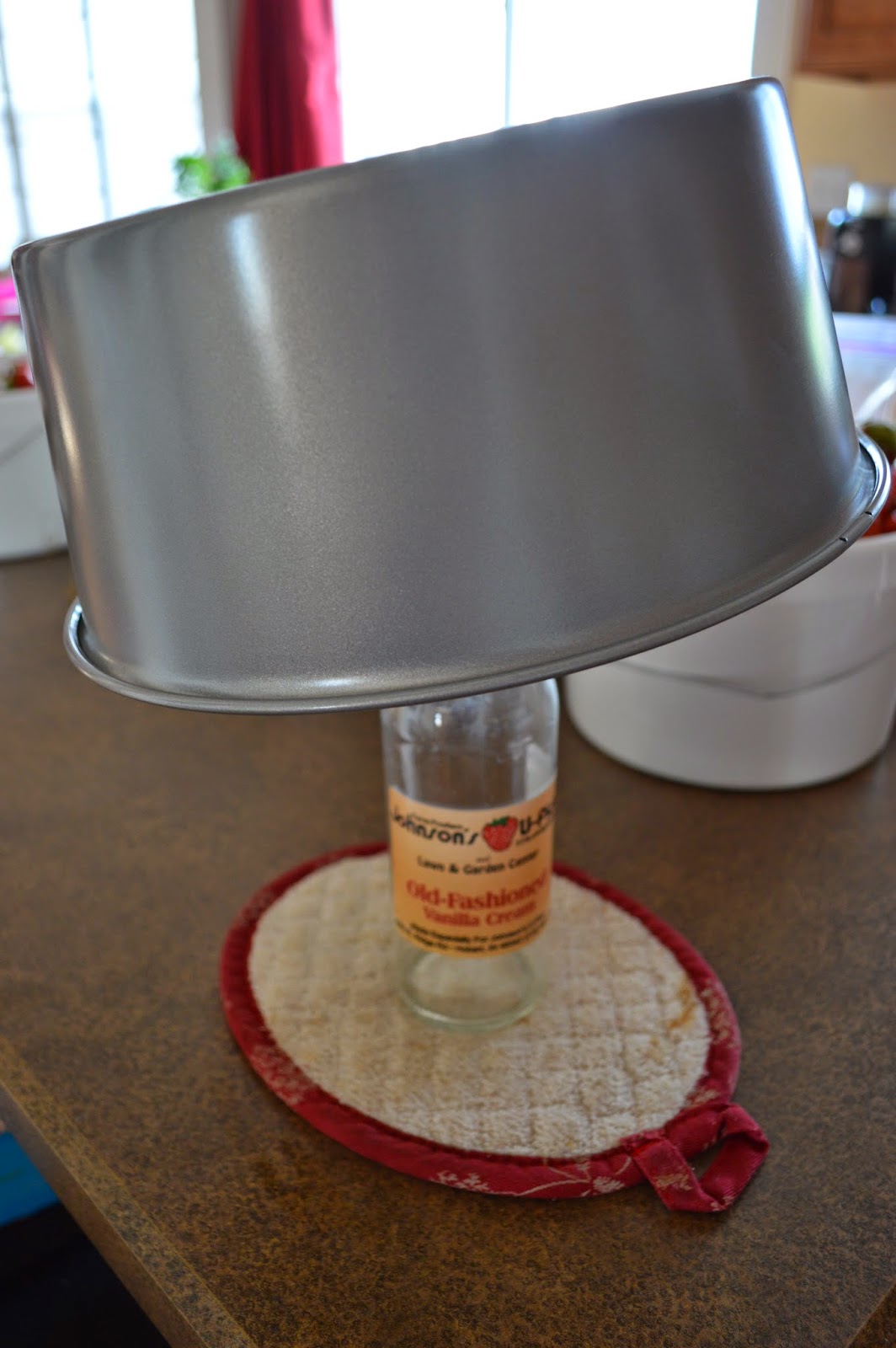 When the cake is cool, run a knife around the edges and invert it out of the pan. 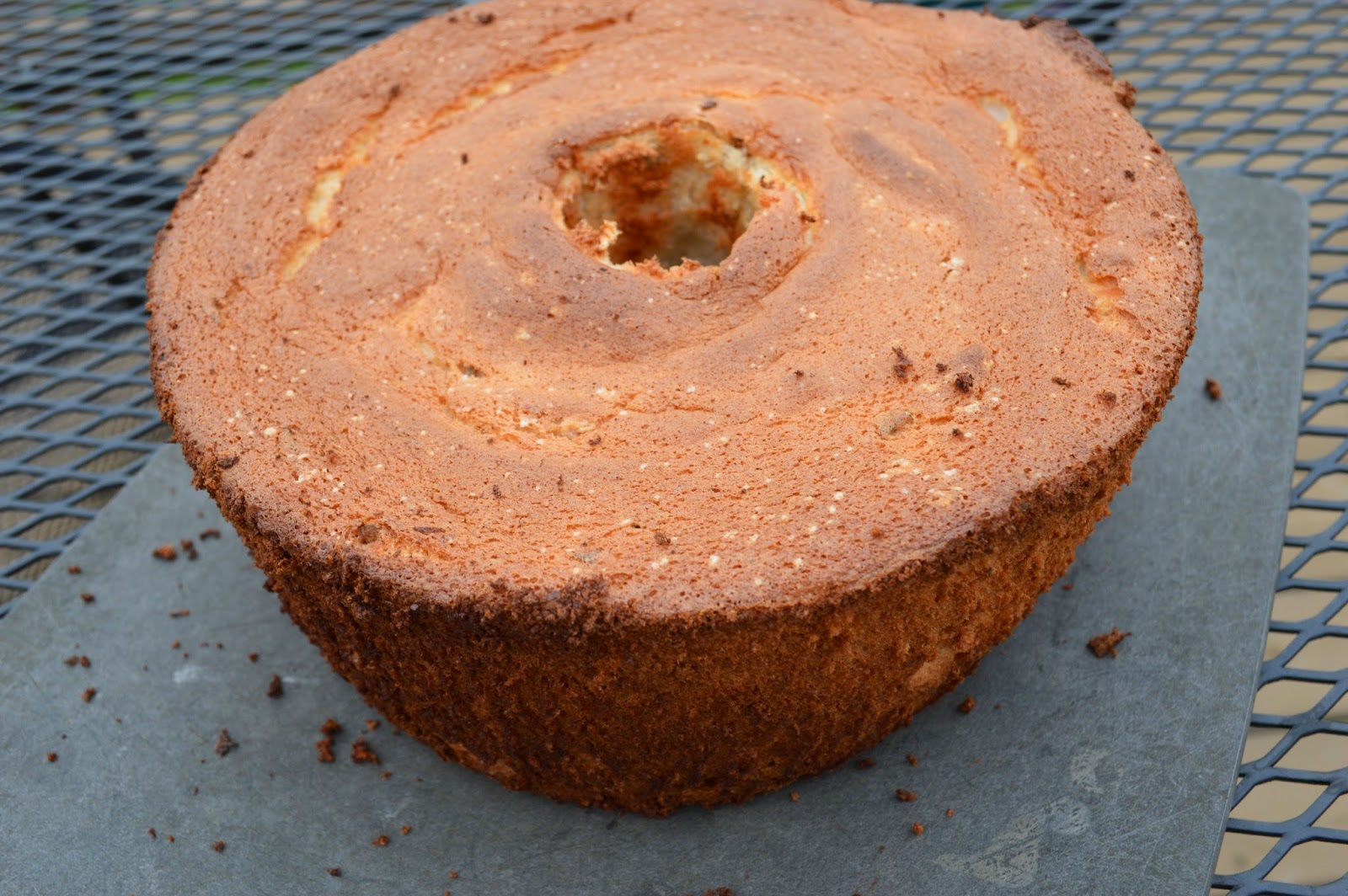 Cut it into slices and serve with the strawberry sauce on top.  Add some whipped cream if you'd like, and maybe garnish with extra basil.  Because you can't have too much of a good thing! 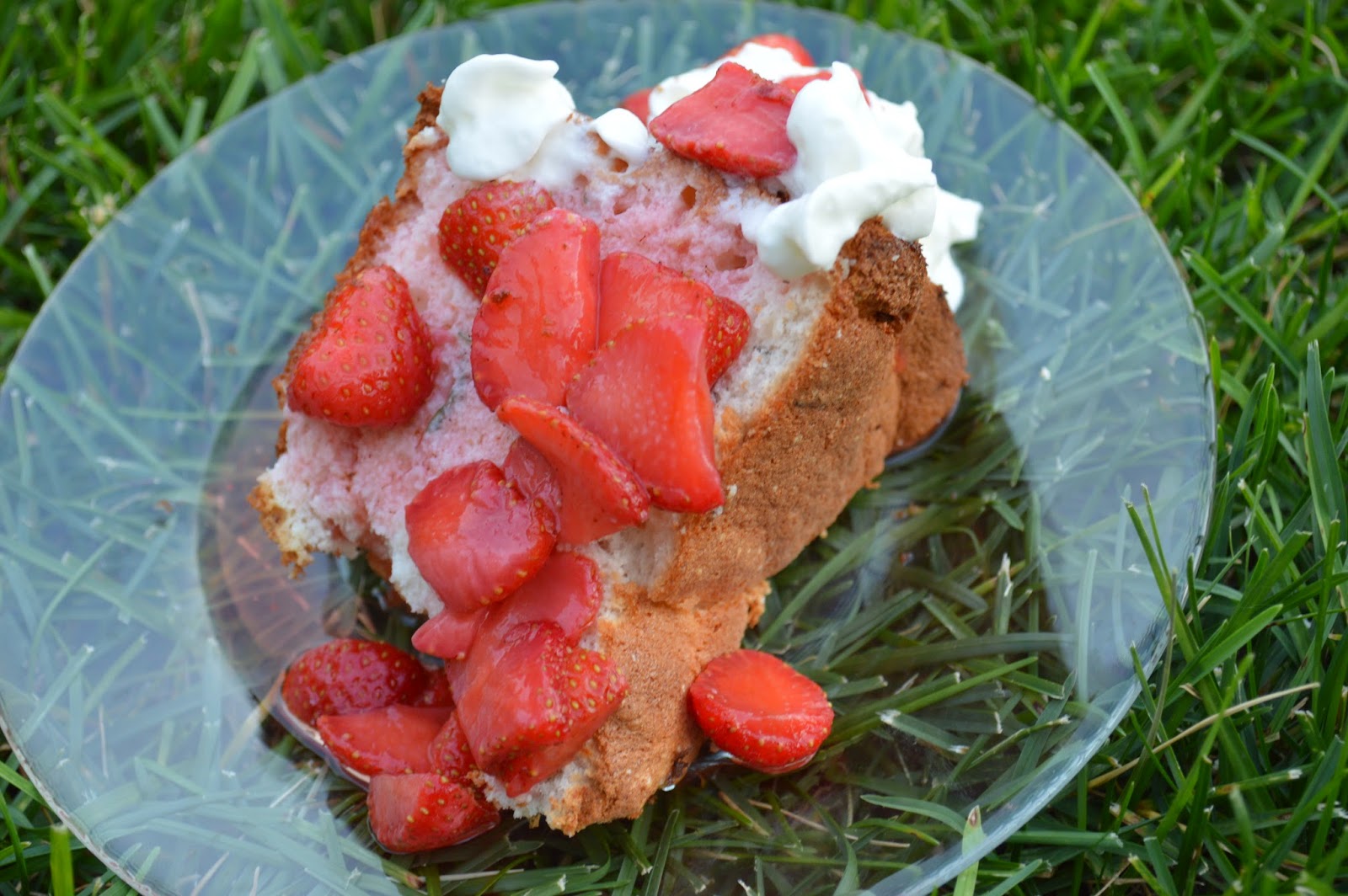 Light and airy, but filled with flavor.  This cake is heavenly, for sure!