Wow, computer issues have plagued me, and between that, the kids going back to school, and me starting a new job, I feel like I've totally neglect the blog for the last couple of weeks.  Yikes.

So, it's time to jump back in, full speed ahead!

I have 2 weeks of CSA shares that I'm back-logged on, but luckily, the recipe I have for you today uses things included in both of them. 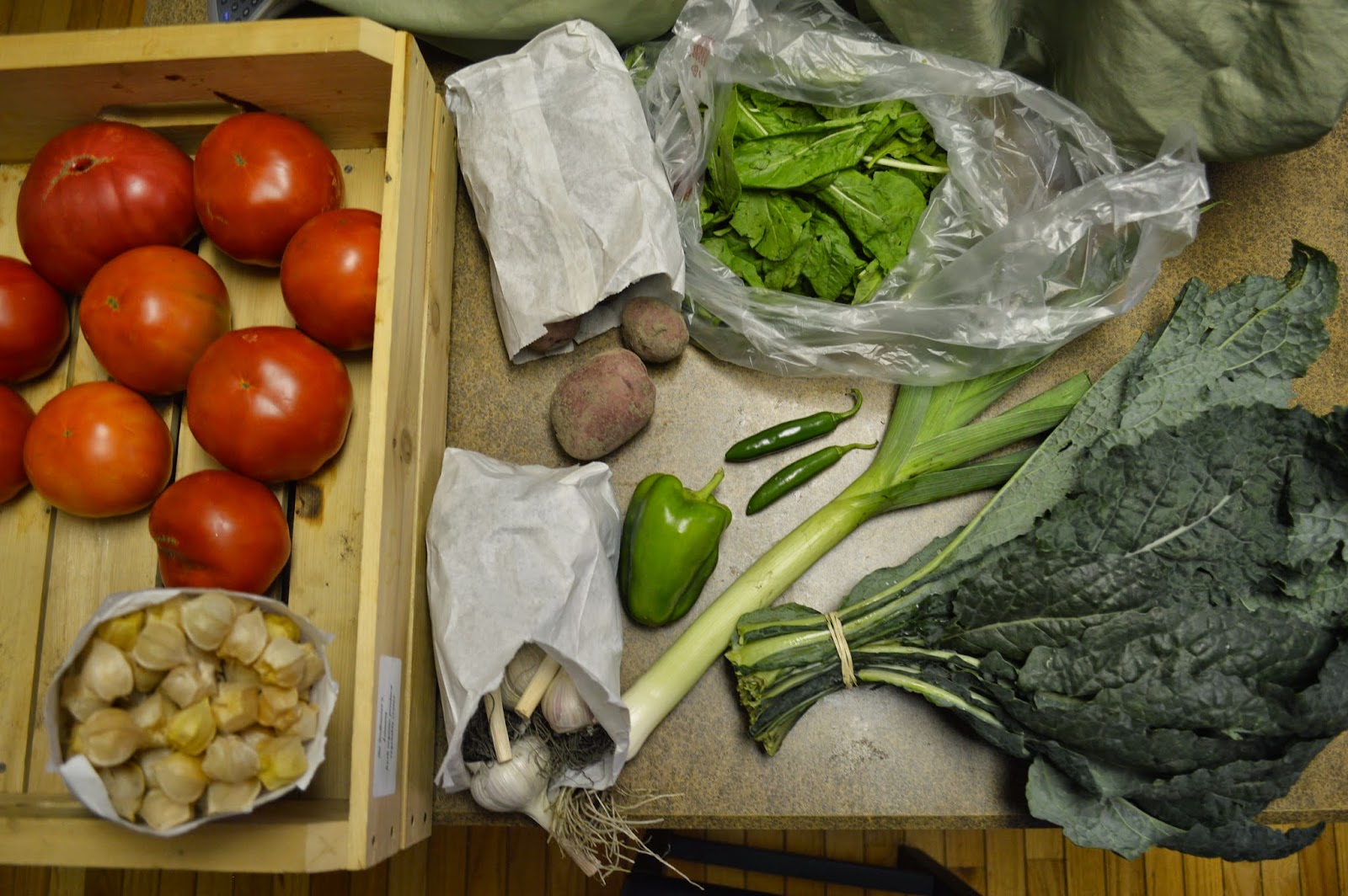 Week 6 gave us more tomatoes, kale, broccoli, lettuce, potatoes, onions, hot and sweet peppers, and collard greens.  I swapped some thyme in the swap box to get more tomatoes. 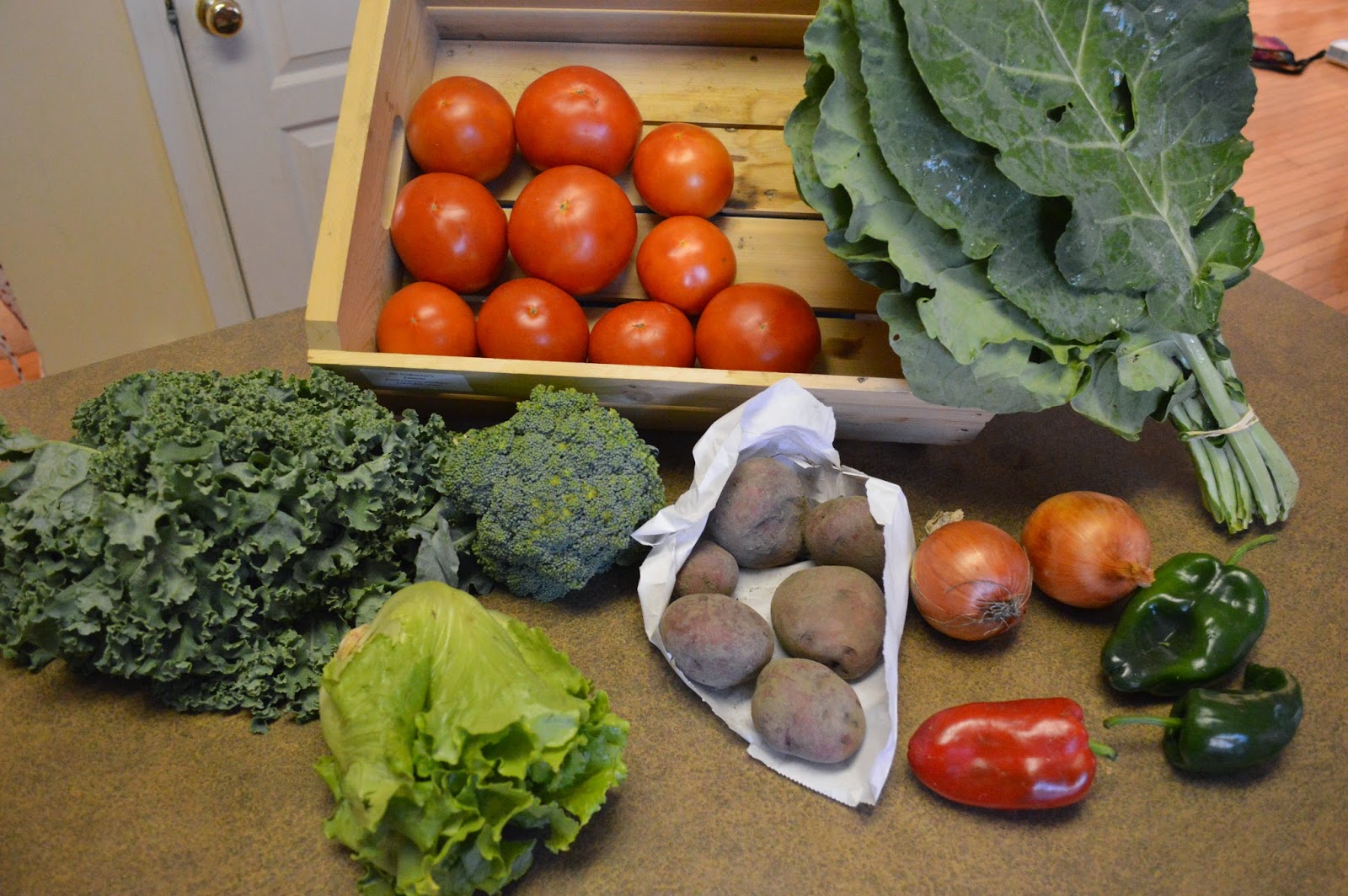 With my own garden going nuts with tomatoes, I blanched, peeled, and froze the tomatoes both weeks,  They will make for awesome gumbo this winter.  I'm experimenting with a muffin recipe for the ground cherries...hopefully bloggable soon.  The sweet peppers have been put into lunches, the broccoli as well, and the hot peppers will go into anything where I need some extra heat.  Spinach and kale from the first week: frozen.  The garlic will go into many things, but I'm also saving a couple of heads to plant in my own garden!  We had tacos and used the lettuce and onions.  The collards are kind of a bear to cook, because you have to cook them for a while, but they are so yummy when you do...those will be for a dinner side later in the week.

With the kale from the second week, a little of that garlic, and the potatoes from both weeks, I made a healthy, hearty, and delicious meal that my family ate right up: Bacon, Kale, and Potato Dinner. 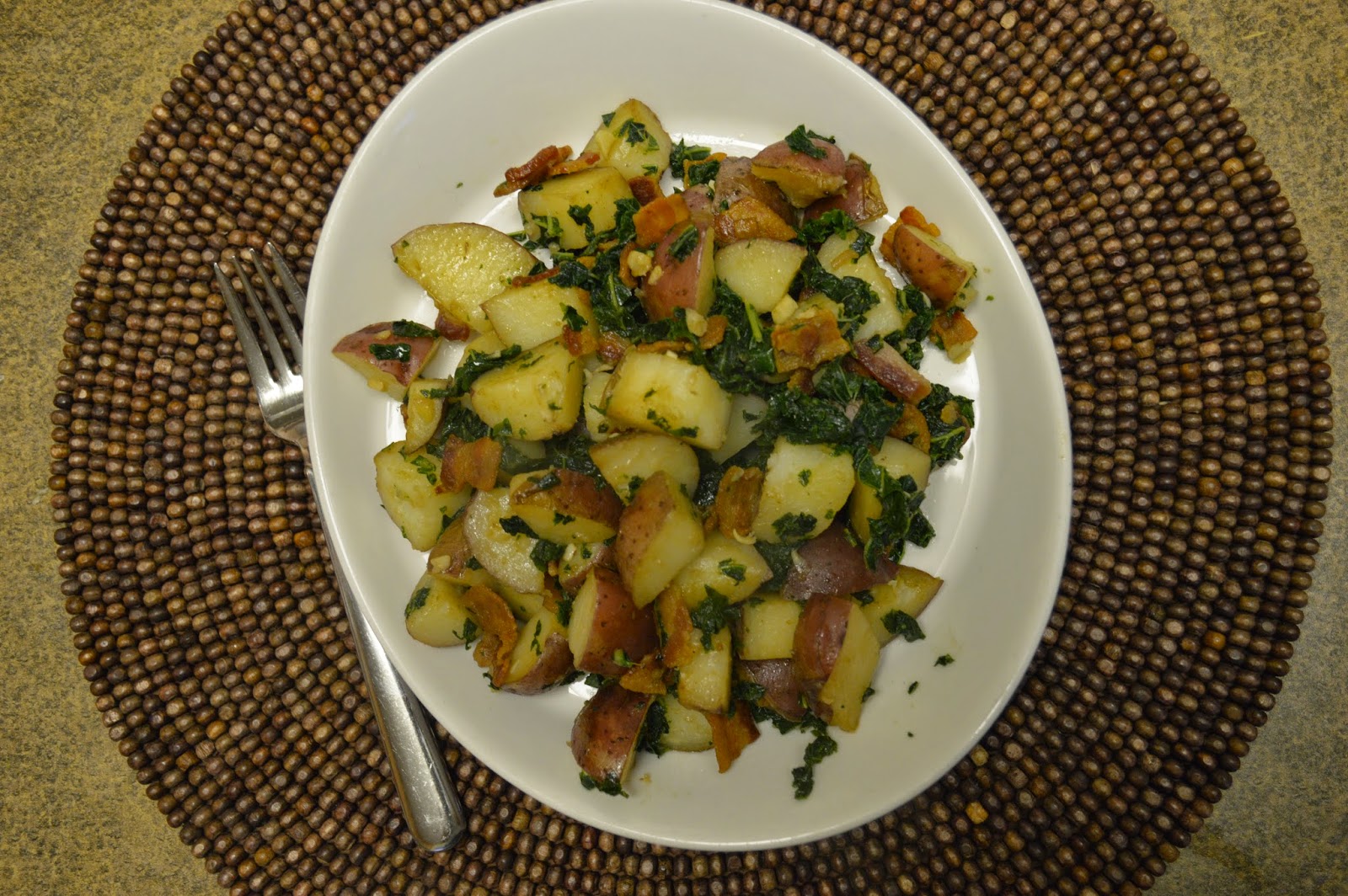 It's filling, full of garden fresh ingredients, and completely crave-worthy.  If you have a problem getting your kids to eat kale, try this dish.  I based it on a recipe from Tribeca Nutrition, but amped up the bacon.  I also switched in stock instead of water, to keep the flavors coming, and backed down on the soy sauce.  The whole thing takes right around a half hour to make.  I have a feeling that this will be a great go-to dish after cold winter days spent playing in the snow!

So, first prep a large bunch of kale.  Get a pot of water boiling.  Tear the leaves off of the thick stems of the kale, give them a quick wash, then put them in the boiling water for about 5 minutes.  Drain and rinse it through with cold water to stop the cooking.  Squeeze it in a towel or paper towels to get it completely dry, then give it a good chop up. 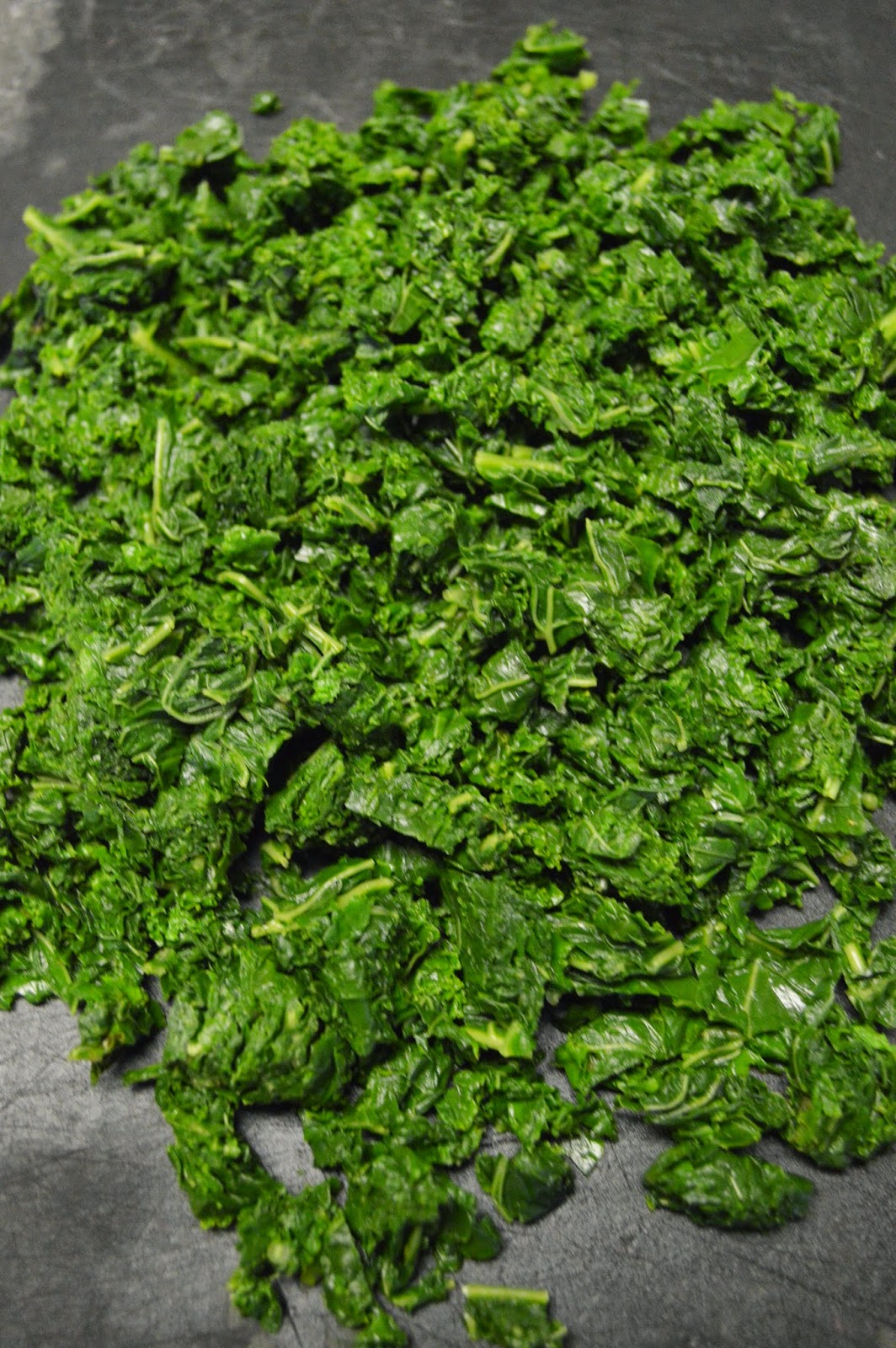 Next, prep your potatoes.  Scrub, dry, and chop them into pieces about 1-2 inches.  I used both weeks' worth of potatoes, which was probably about 6 pounds.  This will work with any type of potato, but I used the red potatoes.

Chop and cook your bacon in a large pan until crispy and golden.  The original recipe called for 2 slices, but it also had less potatoes, and I love bacon.  So...I went with a half pound of center cut bacon.  Reserve 2-3 tablespoons of the bacon drippings, and put your bacon to the side for now. 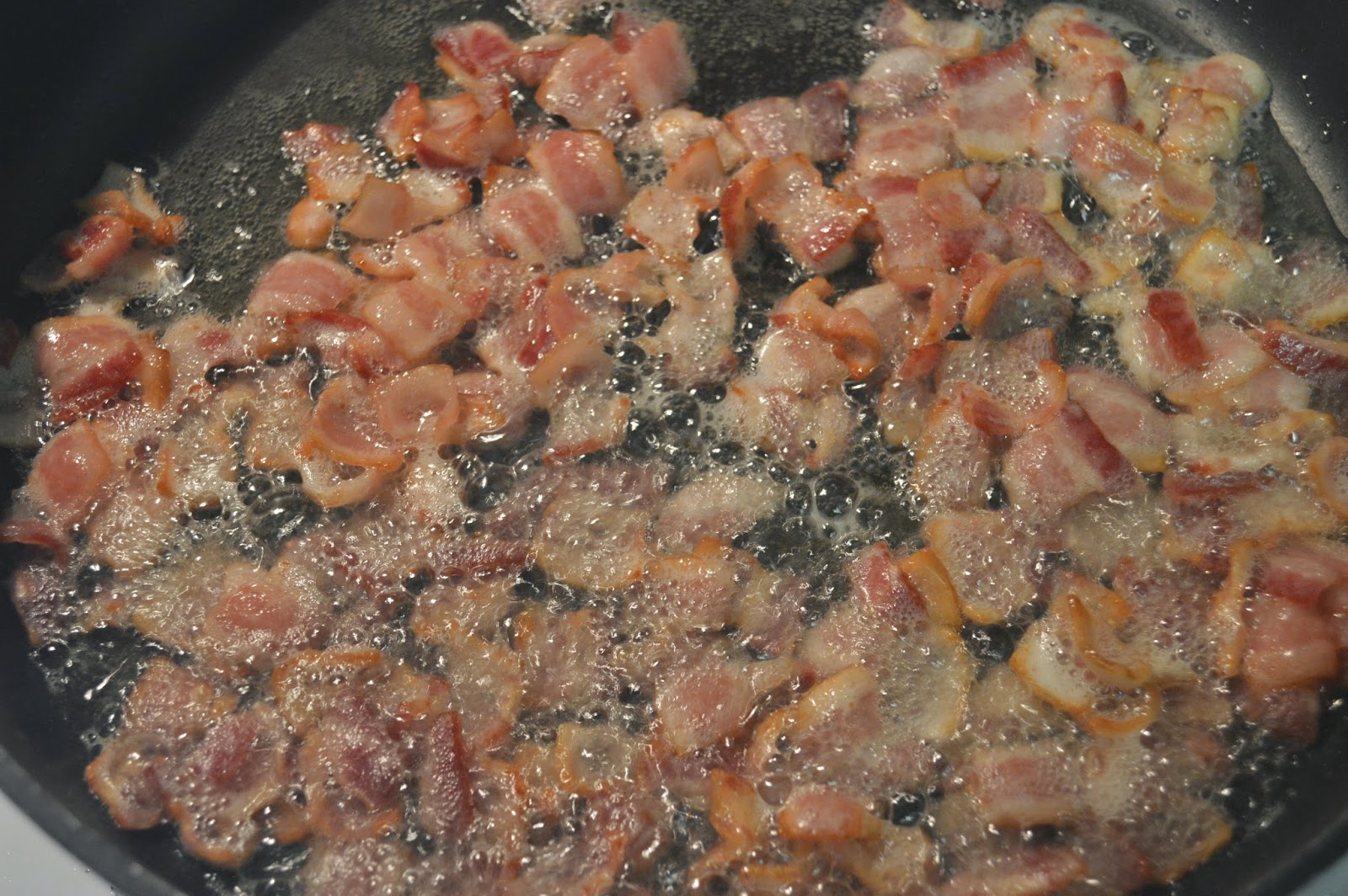 Chop several cloves of garlic.  I went with 5 cloves.  We also love garlic.

In the pan with the bacon grease, cook your potatoes until they are getting brown on all sides.  Add the garlic and cook for a couple of minutes, until it starts to smell irresistible.  Add in a little (not much!) salt and some pepper.  Add in a cup of water or stock (I used vegetable stock), cover and simmer for 10 minutes, until the potatoes are tender and the liquid cooks out.  If you need to, you can add some liquid if the potatoes are not cooked but the liquid is gone.

Add in your bacon, the kale, and a tablespoon of soy sauce. 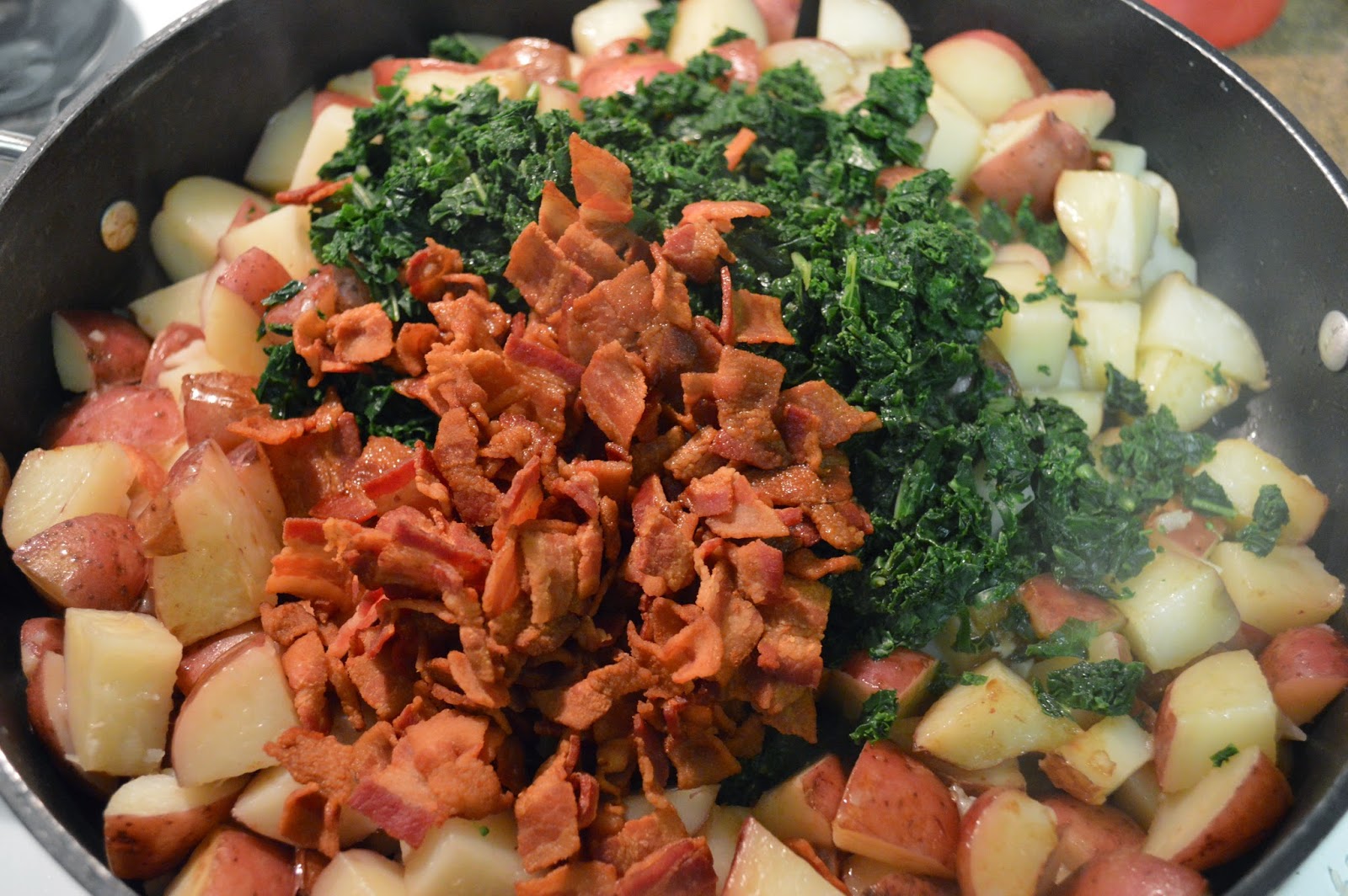 Give it a good stir, then cover and heat it through for 2-3 minutes. 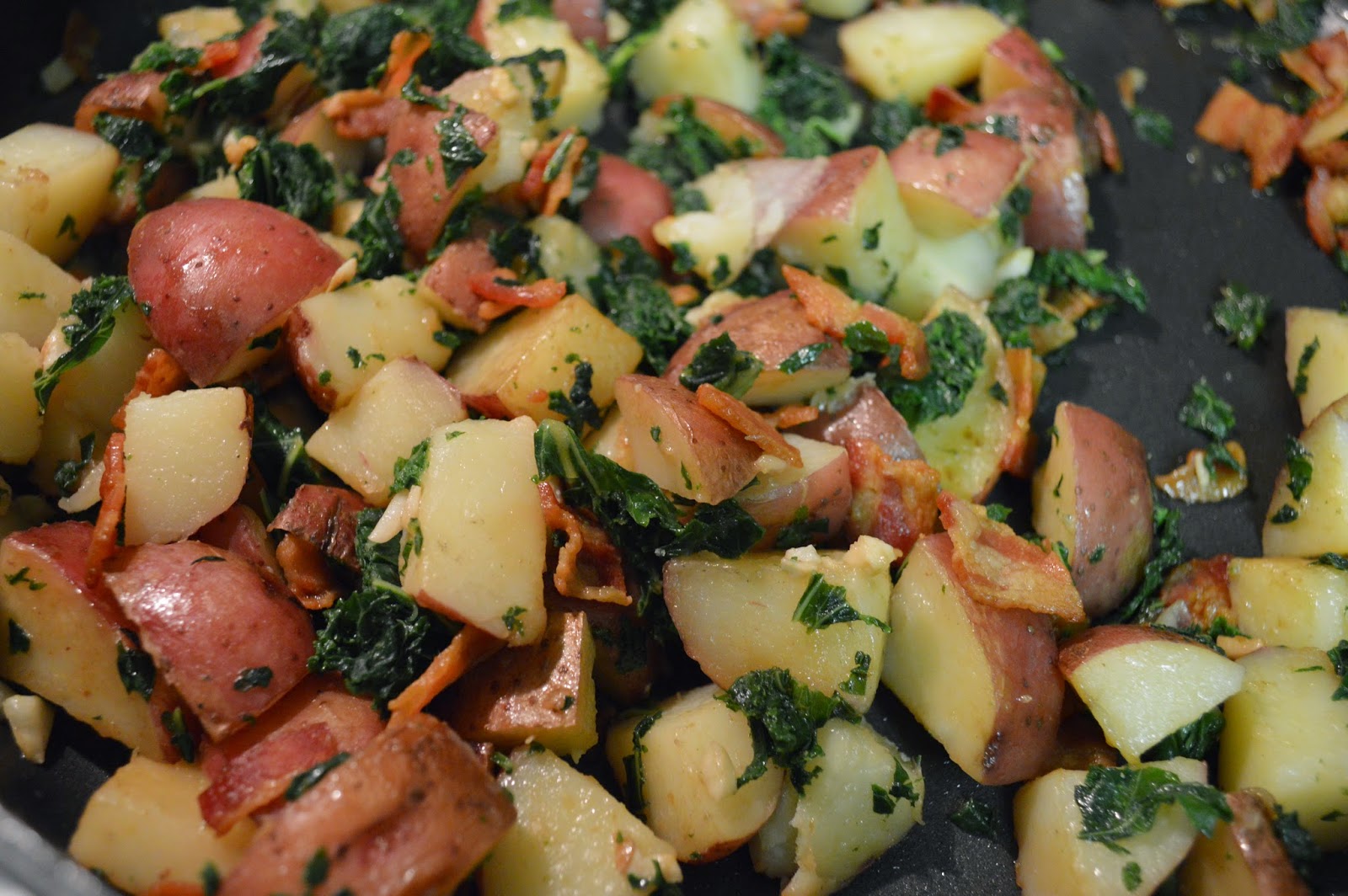 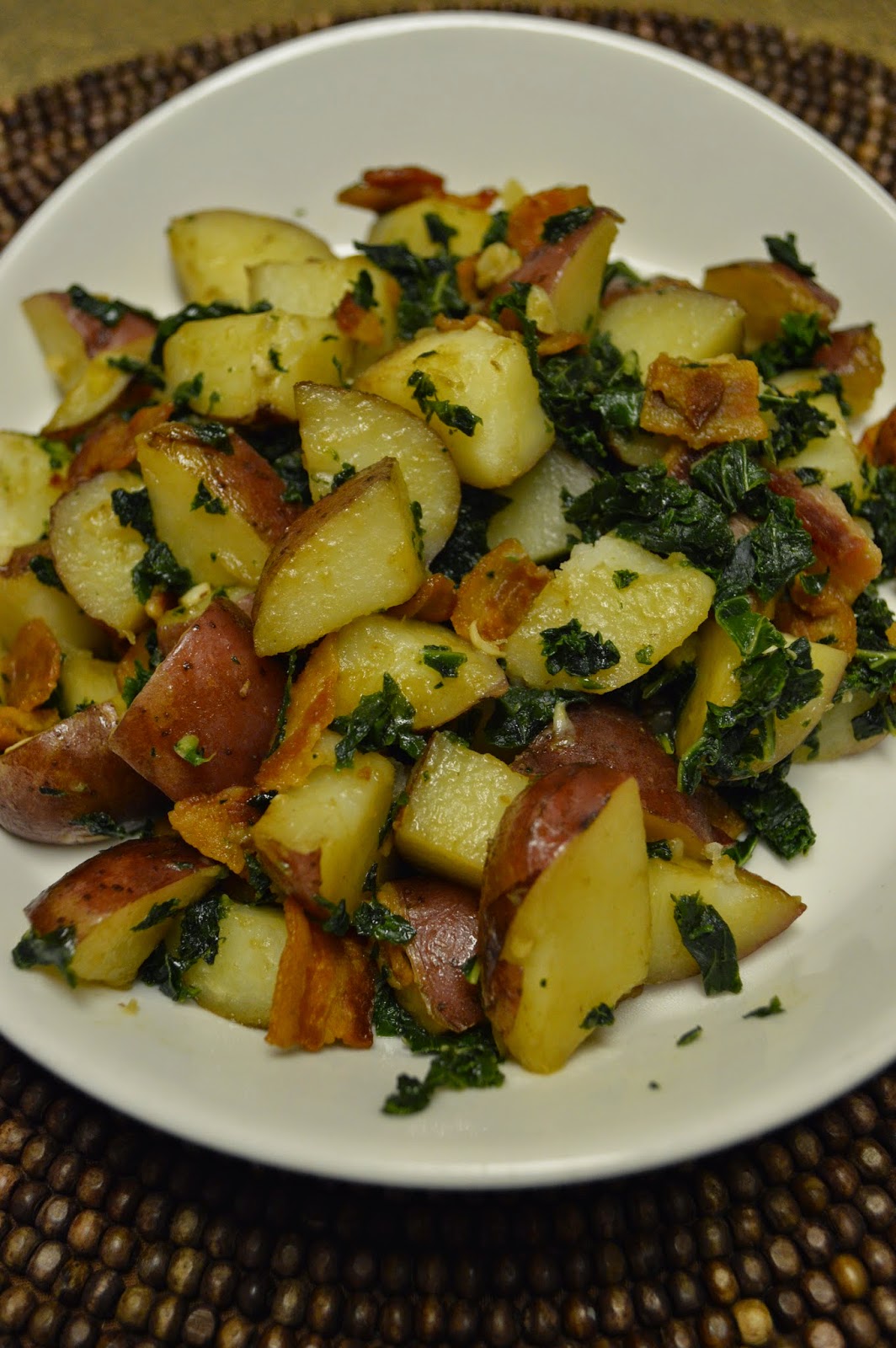