There are a lot of vegetables that I think get overlooked. Eggplant, for me, used to be one of them. Sure, they're pretty, what with their shiny purpleness and all, but they also can be intimidating. But this dish, this one, is a game changer for eggplant. I'm telling you, when I make this, it gets actual cheers from my family. Cheers, I tell you! Also, as with many of my favorite recipes, it's really easy, quick to put together, and gets some good healthy stuff into your hungry mouths. 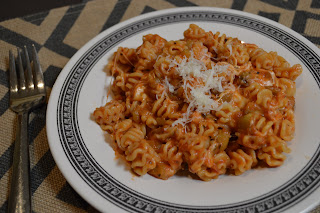 Now, just a quick note or two on the eggplant...

Eggplant can be tricky, for sure. I grow my own in our garden, and it's really fantastic for the month or two that we can harvest it, but outside of that, we're dependent on the store or market for our eggplant needs. And while good eggplants are fantastic, bad ones can be awful. I got a gorgeous looking eggplant from the farmer's market a little on the early side of the season this year, and I should have been clued in when the farmer selling them told me that he "never got the taste for the stuff", but I was too enamored with dreams of eggplant dishes. It turned out to be bitter and rather dry, but there was no way to tell that by looking at it, and you can't really eat them raw, so we didn't find that out until the final dish, which is really, really frustrating. So, try your best to pick smooth, clean looking eggplant, but also, if you get one of those fluke bad eggs (or bad eggplants, in this case), please don't give up on them entirely. Varieties can be totally different, or even the same variety at different times. 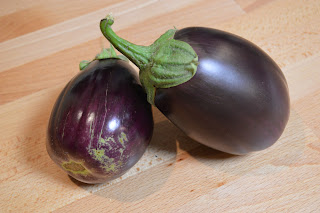 Okay, so, back to that delicious eggplant parmesan pasta.

You'll need a pound of a fun-shaped pasta. I usually go with cavatappi, fusilli, or radiatore, something with plenty of spaces for the sauce to get into. Start a large pot of water boiling, and once it does, salt the water and cook the pasta according  to the package directions.

While the water is heating, peel one large or 2 smaller eggplants and slice it into small cubes. 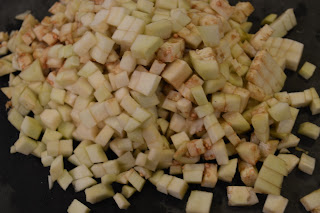 In a large pan, heat up some olive oil, about 2 tablespoons or so. Toss in the eggplant and stir it around to coat with the oil, then toss in a teaspoon of garlic salt, a half teaspoon of granulated onion powder, and 2 teaspoons of dried basil. Stir it and cook until the eggplant is soft, about 10 minutes. 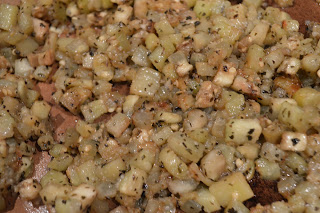 While the eggplant is cooking, and probably the pasta at this point too, shred up some cheese. If you prefer, just grab a bag of shredded Italian cheeses, but I'm a block cheese kind of woman. And our favorite for this recipe is to get a good garlic cheese. Lately, that's been some garlic cheese curds from the cheesemonger at the farmer's market, but there are some good options at the store as well. Shred up about a cup of that. Then a half cup each of fresh mozzarella and fresh parmesan. Makes the dish good and cheesy, which everybody loves. 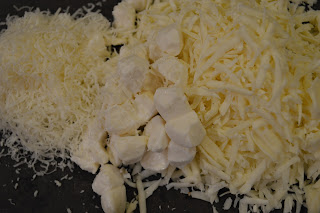 The last thing you'll need is a jar of your favorite pasta sauce. Our sauce of choice is Newman's Own Roasted Garlic. We're a little gaga for garlic here.

So, by now you should have your cooked eggplant, the cooked pasta, the shredded cheese, and the jar of sauce. Stir them all together, either in the pasta pot or the skillet, and heat it for just a minute or two, until the cheese gets good and melty. Scoop and serve! 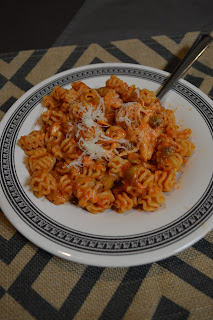 If you feel like fancying things up a bit, you can serve a salad, garlic bread, or some Italian sausages or meatballs alongside the eggplant parmesan pasta, but it's a great simple meal on its own too.

Cook the pasta according to the package directions.

Peel the eggplant and slice into small cubes.

Heat the olive oil in a large skillet. Add the eggplant and toss to coat with the oil. Add in the seasonings and stir. Cook until the eggplant is soft, about 10 minutes, stirring occasionally.

Add the eggplant, cheeses, and pasta sauce to the pasta and mix. Heat until cheese melts. Served topped with extra cheese, if desired. 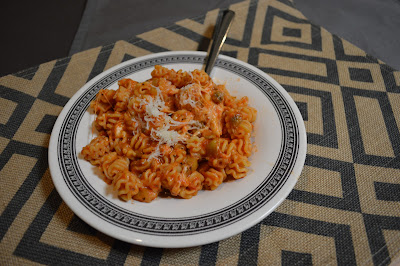