Chocolate on the Brain

So, today we went to the arboretum for a wonderfully delicious event: the annual Chocolate Expo and Market.  To me, it might as well be that scene from Willy Wonka where they run into the room where everything's edible and gorge until the greedy chubby kid falls in the chocolate river and spoils it for everyone, only before the river fiasco.  Bunches of local chocolatiers and vendors, with very high-quality artisan goods, and almost all of them have samples of all the products.  Sugar rush like none other.

This is, I believe, at least the third year that my family has made it there to this choco-rific event, and it did not disappoint!  Sample after sample of chocolates and caramels and other sweets, twisted and developed in ways that I usually only get to drool about while watching Food Network.  Get out your wiping cloths, and try not to lick the computer screen. 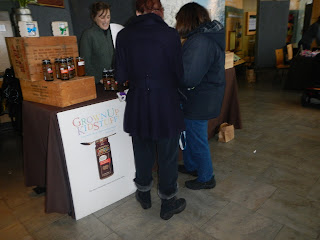 Once we got there, I forced myself to focus, running a Zoolander-like, "Do not be distracted my the beautiful confections" through my head.  Yes, I was here to enjoy, but I had specific objectives too.  First off, we headed to GrownUp KidStuff.  When my family first found them a few years back, they sold 3 items: caramel sauce, chocolate sauce, and chocolate sauce with Grand Marnier.  They have now doubled that and added a dairy-free chocolate sauce, a Hot!Chocolate sauce (Tell you about that in a bit!), and a butterscotch sauce so new to the lineup that it didn't have full labels yet today.  Last year I sampled the Hot!Chocolate sauce, loved it but didn't purchase it, and regretted it for pretty much the rest of the year.  No joke, it was even on my Christmas list this past December.  It's one of those things you have to taste to truly understand, but it's a chocolate sauce that has a pepper heat to the finish.  It's kind of mind-blowing.  So, I got my jar of Hot!Chocolate, a jar of the chocolate Grand Marnier sauce for my mother-in-law, who has tried it a few times at dinners at my house and loved it, and a jar of the butterscotch sauce, which was pretty amazing as well.  You know someone who can make a business selling only 6 items has to make those items they best they can be, and GrownUp KidStuff does just that. 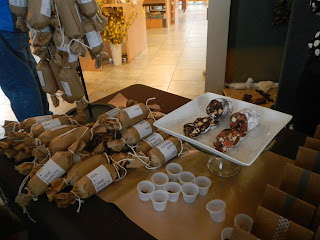 In a stroke of luck, the next place on my hit list happened to be right next to the GrownUp KidStuff table.  I had seen that this year, one of the new vendors specialized in "chocolate salami".  You know I can't pass something like that up without a double take.  Sea + Cane Sweets makes their salami with no meat involved...just chocolate, nuts or dried fruits, and biscotti pieces.  Hubby and I went head-to-head over whether the dark chocolate (which contained toasted hazelnuts and almond biscotti) or the milk chocolate (which contained dried cherries, almonds, and red velvet biscotti) was the best.  We got both.  That was really my vote in the first place.  Plus, we got some walnut bourbon sea salt caramels, despite child #2 begging for the dark chocolate sea salt caramels that she had just sampled the heck out of.  Bourbon just sounded good in that moment...I tend to be a little stressed by crowds, and even though we were there early, it was still plenty busy. 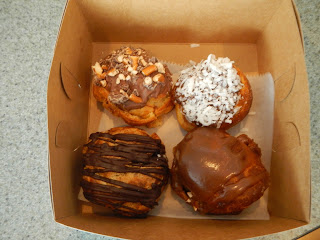 One of the kids' favorite vendors was there: Puffs of Doom.  Their cream puffs are amazing, and the flavors they come up with make my head spin.  We made sure to hit them early, because last year, they were sold out within 2 hours of the show opening.  Luckily, we had gotten there before that, or I never would have found my love for white chocolate cardamom rice pudding puffs.  Today, we went with splitting 4 of their "smaller" puffs between the 5 of us: a banana coconut Nutella puff, a chocolate covered bacon puff, a peanut butter chocolate covered pretzel puff, and a salted caramel chocolate espresso puff.  All were delicious, but my favorite was the pretzel one.  Child #3, aka the picky one, downed extra of the espresso puff when a sister decided she wasn't a huge fan.  The kiddos also enjoy that the owner of Puffs of Doom always gives them cool mini pins with fun Puffs of Doom propaganda on them.  They may be the only kids at school sporting foodie bling, but they do it with pride! 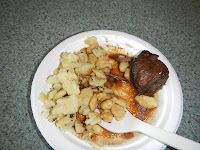 As we were feasting on cream puffs, we also got to enjoy a special plate made by the chef at the arboretum for the festival.  This year, it was a chocolate braised short rib with spaetzle.  De-lic-ious.  My silly kids wanted to share mine while hubby hoarded his, but both of the girls ended up getting their own plate.  It got a little eyebrow raise from the chef when my 8-year old walked up and politely requested the short ribs, please, and again when the 6-year old did the same.  What can I say?  They know good food, and this was way better than just good.  The beef melted in your mouth.  The sauce wasn't obnoxiously chocolaty, but you could taste a slight hint of cocoa under the rich savory flavors of the beef.  I could have eaten that all day.  The chef was also serving small cups of chocolate pumpkin mousse, topped with a blueberry and sprinkled with cinnamon.  Another hit.  Child #2 thought there was too much cinnamon, but that didn't stop her from stealing the blueberry off of mine.  Note to self: encouraging kids to enjoy good food means you may have to fight them for it. 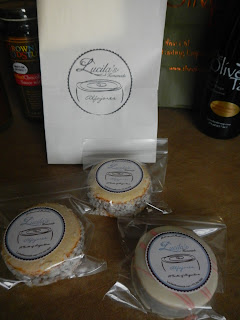 By this point, the sugar was really starting to kick in.  We sampled, and sampled and sampled.  It was divine, but after a while, even I can get sick of chocolate.  Right about at that point, we came across another vendor new to the expo this year: Lucila's Homemade Alfajores.  Alfajores (alpha-hor-ays...but with an accent) are amazing Argentinian cookies.  Lucila and her husband Joe, the owners/masterminds of Lucila's Homemade were great to talk to.  Lucila came from Argentina, and you can tell that it's her passion to share these treasures from her homeland with us lucky Midwesterners.  She was proud to tell us that she uses organic ingredients, including local eggs and butter.  You could taste the attention to detail in her alfajores.  While only minutes before I was getting sick of sweetness, one taste of these perfect cookies and I was hooked.  I managed to exercise some restraint and only walked away with 3.  I may regret that one, but at least now I know where to find more.

We made several other stops to sample, and purchased some other cool finds as well.  Bordeaux cherry balasmic vinegar from The Olive Tap that was almost as sweet and as thick as syrup.  Popcorn infused caramels from Chocolate Twist that completely satisfied my need for salty-sweet balance.  Decadent artisan chocolate bars from Mayana Chocolate, another favorite from years past.  My regret from this year is going to be that I spaced out and forgot to grab a jar of the fantastic Black Label Orange Maple BLiS curd from Rare Bird Preserves, but c'est la vie.  All in all, it was a fantastic morning of chocolaty chocolateness, and you can't as for much more than that! 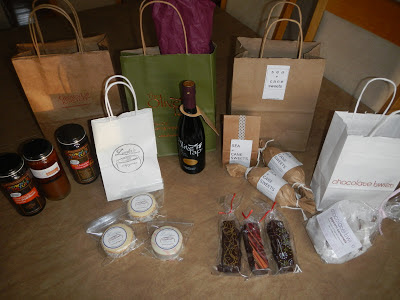 If you're interested in a chocolate pilgrimage of your own, the Chocolate Expo and Market will still be at The Morton Arboretum tomorrow from 10 until 4, and will hopefully return the first weekend in February every year for the rest of my life.  They also have a bunch of other neat chocolate experiences this month, and gorgeous grounds to explore all year round.