I have kind of a reputation around my 'hood, and not the kind you worry about getting in high school, or the kind you fight to earn in college.  People who know me know that I'm a big fan of cooking at home, family meals, from scratch.  I'm the crunchy mom in the group, the (gasp) "healthy" one whose kids like eating crazy things like sushi and lentils and fruits and veggies.  Or at least, that's how some people think of me.  I get the impression that because of this facade, they think that I am always super on top of things, especially in the kitchen.  And there are days, weeks even, that that may be the case.  But usually not.  But sometimes, there are days where I have a grand plan, and I remember to plan ahead enough to thaw stuff from the freezer and shop for any ingredients I might be short, and I have a wonderful recipe in mind to cook, and the stars align and angels sing, and I just know that this, THIS, is the perfect day to cook a warm, rich, soul-soothing beef stew!

And then the universe laughs, once again, at my silly need to control things, and I unwrap my roast to cut it into lovely chunks for stew, and it looks...like this: 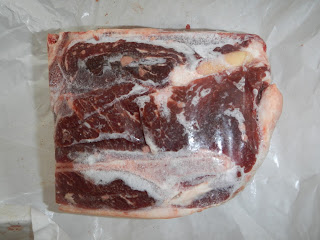 Beautiful beef, right?  Grass-fed, gorgeous color, great marbling...and frozen solid.  As a rock.  My beef guy, John, has many talents as a farmer, and apparently one of those talents is wrapping the butcher paper around the cuts of meat so well that that meat is able to hold its' temperature forever.  On the early fall afternoons when we're driving our half steer worth of beef home and don't want it to thaw in the coolers on the 4 hour drive, that's great.  But for my dreams of beef stew tonight?  Not so great.  Crushing, in fact.

You see, tonight I needed that stew.  Today's the only day this week that I have the time at home to put into having something cooking for hours.  It's the last day this week that I will be able to throw my kids outside in the snow for an hour or two after school without having to take them to some activity or event.  Hubby has a big meeting today, the kind where they have had meetings and planning sessions and rehearsals to prep for the meeting, and I know he'll be great, and that everything will go well, but I also know that no matter how something like that goes, the anxiousness and stress surrounding it is exhausting.  So I want to welcome him home with a satisfying dinner.  I want to call those happy, half-frozen snow-loving children that I have in for a hot meal that they can dig into that will thaw them from the inside out.  Just call me June Cleaver, and then laugh at how wrong that actually is...I mean, did you see that frozen raw beefsicle?  June never had to deal with that crap.

So, what to do now?  Lucky for me, I have a stuffed freezer and some experience with dinner crisis cooking.  I also have a love for any of those cooking shows where they throw the chefs in the kitchen and tell them to make a delicious dish out of cous cous, pig intestines, ghost pepper chilies and Twinkies in 30 minutes.  I'm up for the challenge, and I have a go-to recipe/method for situations like this.  I head to the freezer (which will get a post to itself one day) and survey the contents.  I still want something rich and filling, but I need it to thaw quickly.  I grab a pound of ground beef, unwrap it from John's magical butcher paper, and put it in a bowl to thaw.  I duck back in the freezer and grab some frozen greens...I have a little kale left from the risotto the other day, and some Swiss Chard.  I also grab some of my frozen homemade beef stock.

Please note here, I have only my own experiences in the kitchen for training, no culinary degree, no food safety certification.  I'm going to be honest and tell you that I thaw things in bowls on the counter if I need them in an hour or so.  This is not recommended by the USDA.  Somehow, fortune has smiled on us and, knock on wood, we have never gotten food poisoning from anything I've made at home.  Most of the time, they're still partially frozen when I go to cook them.  Ideally, you should plan ahead enough to safely thaw your meat according to the USDA recommendations.  Realistically, again, I'm no June Cleaver.

While we're on side notes (we'll get back to dinner, I swear), I have another confession.  I didn't always eat well.  My parents were not big into cooking, so I grew up eating delicacies like Chef Boyardee ravioli, franks and beans, and corned beef hash from a can.  A big treat was when we would get the Hamburger Helper stroganoff for dinner.  When hubby and I were first married and both working, that was pretty much a go-to as well.  Brown meat, open box, add water and contents of box, cook and presto: dinner.  Then I went through my food renaissance.  I started learning about where our food comes from, what's in it, how it affects our bodies.  And as difficult as it was, I had to break up with Hamburger Helper.  Look at the label sometime if you're curious...it really sounds more like a chemistry lesson than an ingredient list.  But there are so many good qualities that the idea of Hamburger Helper has: quick, filling, one-dish.  Those are somewhat essential to what I look for in a dinner.  So, I needed a HH equivalent.  At first, I made do with a concoction that also rooted in my childhood, mixing a can of condensed soup and some veggies with the browned meat to make a sauce, but it didn't take a genius to realized that condensed soup is pretty much as much lab-created as the boxed mix.  There are some organic and "natural" brands out there who have HH equivalents, some for condensed soup too, and they're not shabby, but still very processed.  I knew it couldn't be that hard to figure it out on my own and leave the boxes and cans behind.

So, here's what I've come up with.  Dinner tonight is a go-to meal that my family enjoys every couple of weeks.  I can have it on the table in about 30 minutes or less, so it's great for busy nights, or for nights when the dinner planned is not going according to plan.  It's not fancy, pretty or necessarily low-cal, but it is delicious, filling, and full of good ingredients.  It's also easy to adapt to your own tastes, or to what you have available.  I don't really have a snazzy name for it, as hard as I've tried to come up with one, but my kids tend to call it "creamy beefy veggie stuff", or just "more, please".  Maybe I should call it "Hamburger Help Yourself".  Maybe not.  I'll just get back to the food.

First, I throw some rice in the rice cooker.  We've found that we like this recipe best over rice, but noodles work well too.  Use whatever works for you.  Then, I chop up an onion.  Usually I would chop some fresh garlic, but I have some minced garlic cubes in the freezer, so I'll just toss in one or two of those instead.  I take a large pan and I brown the meat over medium to medium high heat with the onion, the garlic, salt and pepper, and a little Worcestershire sauce. 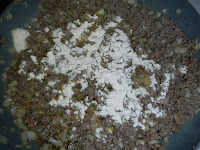 Once that's browned, if you want, you can drain off some of the fat, but leave a couple of tablespoons of it in the pan.  I use grass-fed beef, where there's not as much fat and the fat that's there supposedly has more omega 3s and "good" fats, so I don't bother to drain it.  Sprinkle a spoon or two of flour over the beef mixture, and stir it in until it blends with the remaining fat and clings to the beef a bit.  This will help thicken up your sauce later on without making it lumpy. 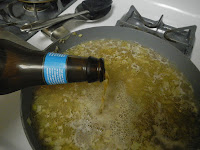 Add the stock or broth, or beer, or wine, or water, if you're in a bind.  A couple cups of liquid total, I'd say.  If it looks too thick, add more.  Too thin?  Boil it down a bit or whisk in a little more flour.  I'm using the beef stock from my freezer and maybe some beer, because I have a ton of it my house left over from the Superbowl party we had.  Bring everything up to a simmer and add the veggies.  I'm using frozen greens, but you can use fresh greens or peppers or broccoli chopped small, or frozen peas or corn or carrots...the possibilities are wide open here.  You could also throw in whatever herbs and spices you like as well. 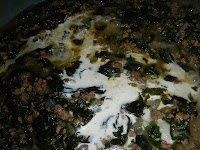 Simmer everything until the veggies are heated through and cooked tender enough for you, and the sauce is thickened, probably around 5-7 minutes.  Stir in some cream until you have a consistency you like.  Season with salt and pepper to taste.

That's it... I dish it out over the rice or noodles and serve it up to my family, who usually chows it right down.  Easy as...well...that boxed stuff.  And endlessly adaptable.  You could use chicken cut into bite-sized pieces instead of ground beef, ground turkey, or maybe some Italian sausage.  As I was writing this, I started thinking that maybe someday I'll try it with sweet peppers and corn and taco spices and cheese for a creamy taco sauce over Spanish rice or noodles.  In the summers, it's a great way for me to use odds and ends from my CSA box, and I'll throw in beet greens or shredded kohlrabi or chopped zucchini and tomatoes.  Do what makes you and yours happy with it.  The nice thing about this cooking thing is that there aren't really any rules. 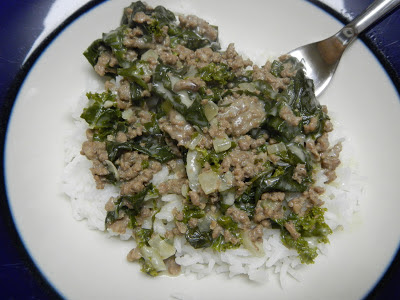 ground beef (or other meat of your choice)
onion, chopped
garlic, chopped
salt and pepper
Worcestershire sauce
flour
stock, beer or water
your choice of veggies, chopped if needed
cream
your favorite rice or pasta to serve over

Brown the meat with the onion, garlic, salt and pepper, and Worcestershire sauce in a large pan.  Drain all but 2 tablespoons of the grease.  Sprinkle 1-2 spoonfuls of flour over the meat mixture and stir it in.  Add about 2 cups of stock, beer, or other liquid to the pan.  Bring everything to a simmer and add veggies.  Simmer for 5-7 minutes, until veggies are heated through and tender and the sauce is thick.  Add about 1/4 cup of cream and stir it in.  Season to taste with salt and pepper.  Serve over rice or noodles.