So, on a typically dreary Chicagoland winter's day, or a weird one like today where it's raining and in the 40s, I can't help but think back on sunnier times.  Personally, I'm all about the in-betweens, and spring and fall are my favorite times of year, but I married a summer man, and I have grown to enjoy those hot, humid days as well.

Now that the kids are getting a little older, we've been taking a yearly vacation up to my grandmother's cottage on Lake Michigan.  It's one of my favorite places, for many reasons.  We overlook the lake.  You can hear the waves crash all night.  Every other house you drive by sells firewood.  Our cell phones don't work there.  You get the picture.  It's just lovely.

This past year, we did something that I have never done in the almost 30 years that I've been going up to the cottage.  We went to a fish boil.  Now, I am a bit of a foodie freak.  I love food and the stories behind it.  I'm a huge advocate of local farms and food culture.  So, a fish boil might not sound exciting to everyone, but to me, it was a huge deal.  A dream of mine, you could say.  You see, a fish boil isn't just boiled fish.  In fact, the fish almost becomes a side note.  It's a gathering, seeped in tradition, an event.  And it's a perfect example of everything I love about local food.

The fish boil is hosted at Cherry Point Market, a farm that has, besides other things, a small farm stand and the most beautiful herb garden I could imagine.  We made a habit of swinging by on our way into town to pick up fresh veggies and homemade cherry almond jelly, sometimes an asparagus strudel for dinner.  Cherry Point actually has a labyrinth made of lavender bushes.  It looks and smells like heaven.  It's between the farm stand and the garden that the fish boil is set.  It took my breath away with how perfect it looked.  Simple white tables, wildflowers in glass jars, and the beauty of nature all around you.  And in the background, the smoke of the fire under a hug pot, ready to make some of the most delicious fish you've ever tasted.

Fish boils around the Great Lakes go back over a century.  Scandinavian settlers to the area brought the custom with them.  So, with the Norwegian and Swedish blood that runs through my veins, of course I felt right at home.  Fish all day, throw it in a big pot with potatoes and onions, then feast!  At least, that was the original version.  It's kind of like a Midwestern clambake.

When we got to the fish boil, we noticed that another group had been wise enough to bring a bottle of their own wine.  Brilliant!  Why didn't I think of that?  So I sent my hubby off to the local winery for a bottle of our favorite of their many wines, the Harvest Rose.  (Much better than their specialty asparagus wine...but that's a blog for another day!)  Luckily, The Fox Barn Winery is probably less than half a mile down the road, so it was a quick trip.  :)
While we waited, the kids explored the gardens, shared gymnastics skills with the other children at the fish boil, and eagerly peered at the steaming pot and the huge cages of food.  My oldest, in particular, had many questions for our hostess, who was more than willing to answer them.

There's actually a lot of science, chemistry in particular, that goes into a fish boil.  And that science starts with salt, a whole lot of it.  I love salt, so I was giddy as the first and second boxes were poured in.  By the next few, I was getting more wary.  It was a big pot, but there were pounds and pounds of salt!  It turns out that the salt is an essential component.  I wish I had taken notes, but all I can remember now is that I think it has something to do with the density and possibly the boiling point of the water.  Whatever that oversalination of the water does, it is nothing short of a miracle in how delicious the food that goes into it comes out!. 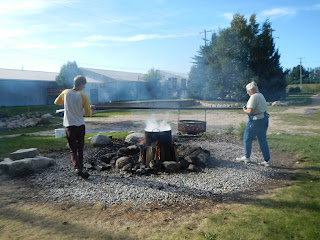 The first basket that goes into the pot holds the red skin potatoes and packets of seasonings.  It's a big production as two people arrange the basket on a long pole, walk it to the boiling pot, and carefully lower it in.  After the potatoes have cooked for a bit, a big bucket of whole, peeled onions goes in.  Then, after that has had some time to meld, the fish is bought out in another basket and lowered regally into the pot.
Then comes the big moment: the boilover.  The fish cooks until the oils from the fish rise to the surface of the water.  Then, everyone is called around to witness the amazing pyrotechnics about to commence.  One of the farm hands (a brave young man) approaches the fire and does the exact thing you are always warned never, EVER to do to a fire.  He throws a pint of kerosene on it.  And it's pretty awesome!  The flames shoot up about 20 feet in the air with a gigantic "woosh!" sound, and everyone "oohs" and "ahhs" at the sight of it.  This year, I was totally immersed with videoing it, but next year, my plan is to have my hubby take my picture as I slow-motion run away from it, Die Hard style.  The intense heat from the flames causes the water to boil over and the oil from the fish to be whisked away over the edge of the pot.  And then, dinner is ready!
Everyone lines up (you can bet my kids somehow arranged themselves to the front of the line), and our hosts serve up the meal.  There's the whitefish, perfectly cooked and flaking so easily that you could look at it the wrong way and it would burst into pieces.  The red potatoes and onions come next, along with an assurance that "you have never tasted onions like this in your life".  There is coleslaw and warm, crusty bread, and bowls of butter, one bowl plain and the other mixed with herbs straight out of that amazing herb garden.  I skip the coleslaw (never have been a mayo fan) but help myself to plenty pf the herb butter...on the bread, on the potatoes, on the fish.  I could barely make it to the table without sneaking bites off my steaming plate.
The food was phenomenal!  The fish was sweet and tender and didn't taste "fishy" at all.  My guess is that the oils washing out and over the sides has a lot to do with that.  Anyone who's ever taken fish oil supplements can attest to the idea that most of that fishiness is in the oil.  The onions were sweet as well, and a nice texture that still had some al dente firmness to them.  The potatoes were great, elevated by the herb butter to become a little smushy bite of yum.  The playful chatter that had filled the air earlier dissipated as everyone was consumed by enjoying the delicious feast that we had been served.  Our hostess took the opportunity to give us some of the local history and impart an appreciation for the grounds we were feasting on.
After we were all seriously satiated, we got to socialize a bit more as our hosts prepare to serve up massive plates of dessert.  Homemade cherry pie with fruit from the orchard a few hundred feet away, topped with a generous scoop of vanilla ice cream.  This year was a rough one for Michigan orchards, as a combination of early warmth in the first few months of the year and a couple of hard frosts in the later spring set about a string of agricultural events that killed off most of the budding fruit, and our hostess informed us that these cherries were still from the orchard, but that they had been frozen from the previous year.  We were among the lucky few that still got to enjoy the cherry pie that year.  I'm glad we did.  The sweet-tart burst of the cherries, the buttery flake of the homemade pie crust, and the creaminess of the now-melting ice cream combined to make all my dessert dreams come true.
There's an episode of Friends that I just love (okay, I love all of them) where Joey breaks out Phoebe's maternity pants for Thanksgiving dinner, and I'm seriously considering the same approach the next time we come to the fish boil.  (Now, picture how epic that Die Hard slow-mo run with me wearing my old maternity pants would be!)  I was practically bursting, both figuratively with happiness and almost literally with food.

We watched as the sun set over the hills, explored the gardens with the kids some more, and eventually reluctantly made our way to the car to head back to the cottage.  It was a near-perfect night, and the whole family raved about it the whole drive.  If you ever have a chance to experience a fish boil, especially the one at Cherry Point, I highly, highly recommend it!

Cherry Point also does authentic lumberjack pancake breakfasts...but that's a story for another day.  :)
Posted by Krasimom at 1:44 PM