The weather's getting colder, and it's finally starting to feel like fall around here.  Which is both invigorating and depressing.  On the one hand, it's kind of a relief that the work-intensive gardening season is coming to a close.  On the other hand, I hate not being able to go out and grab something for dinner from the yard.  But, for now, I'm just doing my best to harvest and preserve whatever fresh homegrown veggies I can from my gardens.

Tomatoes are tricky things.  If it's not warm enough, they won't ripen.  And if a frost happens to hit, they pretty much roll over and die.  So, with this cooler weather, I had bunches of tiny green cherry tomatoes on my bushes, and not much hope for them.  I mean, I do love fried green tomatoes but that battering, dipping, rolling and frying is a lot of work for tomato slices that are only an inch in diameter.  My middle child, the adventurous eater and tomato snatcher, grabbed a green tomato and popped it in her mouth...and then immediately started spitting it out all over and racing for something else to get the taste out.  So naturally, I had to try it too.  They are pretty gross.  Bitter, astringent, a little sour, but not in a good way.  But then it came to me...currants, some gooseberries, things like that have those qualities too, and they make amazing jams and jellies.

I mean, what can go wrong with dumping a ton of sugar on something and cooking it down until it's a sticky, delicious mess? 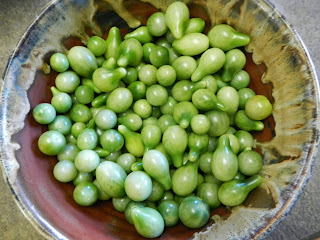 So, I gathered all the little green orbs I could find out there, about 4 cups, more than I thought, and gave it a go.  I looked up "green tomato jam" on the web, but couldn't find anything that I was really excited about as far as recipes go.  One thing that most of them had in common was to leave the chopped tomatoes in sugar to sit for a while. 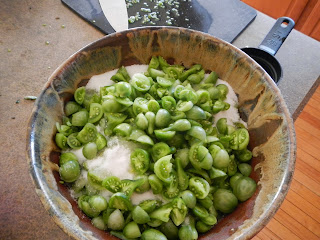 I chopped the mini green tomatoes up, most in quarters, some in halves, and layered them in a stoneware bowl with sugar.  It ended up being about 5 cups of sugar.  I'm not sure if the same holds true for green tomatoes as it does for ripe tomatoes, but you never want to work with them in a reactive bowl, like a metal bowl.  It will pick up a weird, metallic taste to it. 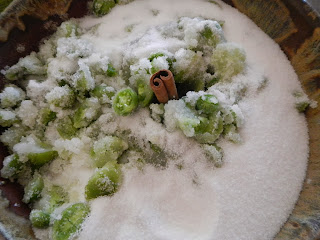 I also shoved a hunk of fresh, peeled ginger and a cinnamon stick in there.  Hey, nothing covers up tastes like some spices.  I figured that I could try making a spiced tart jam, like the holidays in a jar. 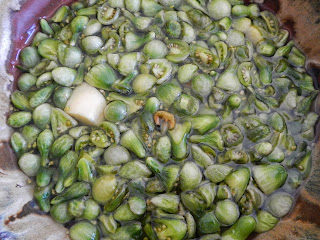 Then the creative juices really started flowing.  And the tomato juices as well.  By the next morning, it looked like this, all liquidy and softened.  When I went to stir it up there was a decent gathering of sugar at the bottom of the bowl.  A quick taste let me know that everything was working...that taste that made me want a toungectomy the day before was gone, and the flavor was much more pleasant.  It still had a green sort of flavor to it, but as more of a side note to a sweet, almost citrus, flavor.  I decided to build on that. 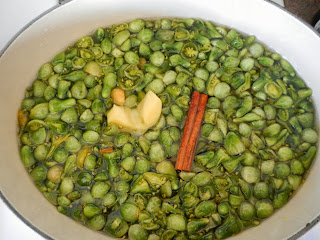 I poured the mixture into my large enameled pot (again, non-reactive!) and added the juice and some grated rind of 2 juice oranges and one lemon.  I left the ginger and cinnamon stick in there, for now.  Then I brought it to a boil and cooked it for about an hour. 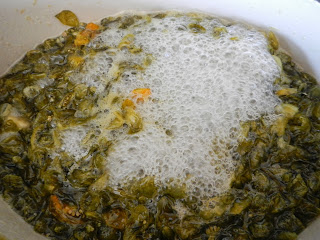 Be careful!  It gets foamy.  You have to watch and stir it once in a while.  Not high-maintenance, but don't just walk away for an hour and expect not to come back to a sticky stove and a possible gas leak from the fire being put out from the overflowing jammy ooze. 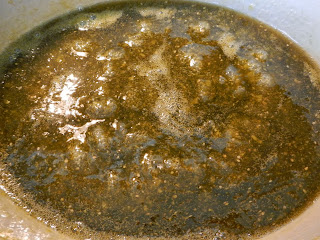 After an hour of boiling, I took out the ginger and cinnamon.  Then I hit the jam with my immersion blender until it was chunk-free.  It looked kind of like thick pond scum.  But it smelled great, and the taste...the taste is out of this world!  I'm going to have to restrain myself next year from picking all the greenies before they have a chance to ripen!  After that, I boiled it for about another 20 minutes, until it was very thick and jam-like. 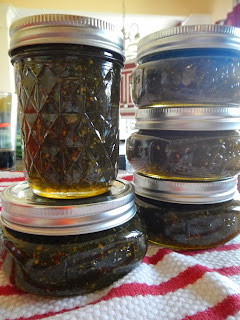 I canned the jam according to typical canning guidelines, and put them in a boiling canning bath for 10 minutes.  I got 5 half-pint jars full, plus another half jar...it probably would have made 6 half-pints, but I seriously couldn't stop sampling it!  I'm guessing this will be good on biscuits, on crackers with cream cheese, straight from the jar with a spoon...

Think gifts too!  This is a unique jam, but it's flavor will appeal to almost everyone.  And forget my earlier "pond scum" comment.  It actually looks very pretty in jars.  A deep conifer green with the seeds dotting through it.  Simply lovely.  Whoever receives it will know the love and care that was put into it.

That is, if you can bring yourself to give any of it away.
Posted by Krasimom at 9:58 PM