But I haven't done a craft yet.

Which may not seem all that strange to people.  I mean, there are a ton of recipes on here, right?  And some insight on parenting, and some fun places to check out.  And not everyone who blog crafts, right?

But I do.  And people who really know me know that I have a lot of fun with it.  And some of them have wondered out loud to me why I haven't posted a craft yet.

This one's for them.

Okay, so, for the backstory:  I saw somewhere that you could get a box of heads on Amazon.  Weird, right?  But also, kind of awesome.  I mean, not real heads...that would be insane.  Styrofoam heads, like the ones you can display wigs on.  These.  So, I thought that that would be the coolest thing to get in the mail, and open up, and, well, I didn't know much past there, because the possibilities were mindblowing to me.  Make a 3 (or more) headed person costume.  Pull pranks on my friends by propping them up against their windows.  Pass them out to random strangers at the mall and see the looks on their faces.  So much amazingness!

Anyhow, I like my marriage enough to not order a box of heads that I had no purpose for, but they stayed in the back of my brain.  A seed of inspiration.

Around my place, we love decorating for Halloween.  I'm not one of those people who does the whole haunted house in your yard thing, or goes crazy with inflatables.  My kids, hubby, and I have a small graveyard that we set out in the front yard, and then we do up the porch all creepy.  I don't think it's over-the-top or anything, but last year, trick-or-treaters were taking pictures in our yard, so it's gotta be kind of cool, right?

So, I was at the Halloween pop-up store yesterday looking for skeleton arms to add to the graveyard, and I saw a bucket of heads.  The heads of my dreams.  And, it gets better, they were $1.99 each!  So I bought 3.  And I took them home like a proud cat that drags a dead mouse into your bed to show you.  And then...made something amazing.

My little project turned out so cool that I went back right away and bought a bunch more heads.  I am that crazy lady with bags of (fake) body parts in her car.  Side note: When I was checking out, the lady asked me, "Do you have enough blood?  Because we sell it by the gallon, if you need.".  That's pretty entertaining, right?

Anyhow, here's what I made.  Just a few short steps, a few cheap materials, and a haunting end result.

You'll need a few styrofoam heads, or just one, if you want. 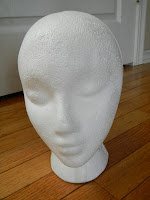 And some ground stakes.  Lucky for me, Target already had Christmas decorations for sale on the FIRST OF OCTOBER.  Grrrrrr. 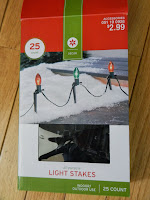 And some "creepy cloth".  My tip is to get it at the dollar store.  I get a lot of my Halloween embellishments there, actually.  Blood splatter window clings, plastic skulls, zombie-eaten limbs, styrofoam gravestones, fake rats, bats, and crows.  They have it all, and I can decorate my twisted little heart out without breaking the bank. 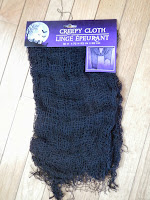 Pitch over.  Back to the project.

Cut the creepy cloth into pieces big enough to cover the head fully.  Mine made 3 covers per package. 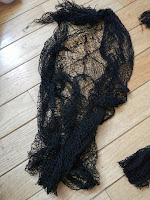 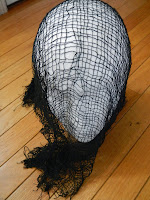 Wrap the cloth over the head, and then shove a stake into the bottom of the head.  There's usually a large hole in the bottom.  You could probably use a glue gun or something and make things more permanent, but I was going for quick and easy.  They are more than sturdy enough to last the month, I believe. 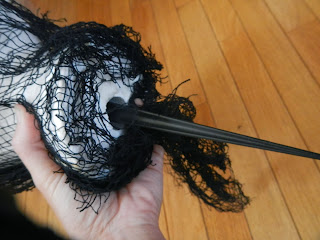 Slip the cloth over the stake.  You could do this on the other side of the stake before you push it into the head (gosh, this blog sounds wrong if you take things out of context!), but you don't want to pull it too tight.  Keeping it looser lets it blow in the breeze a little.  Much more eerie. 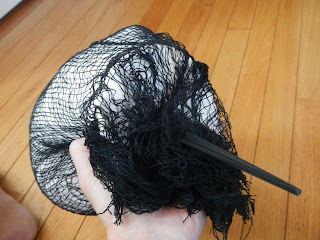 And that's it.  Repeat as needed on other heads. 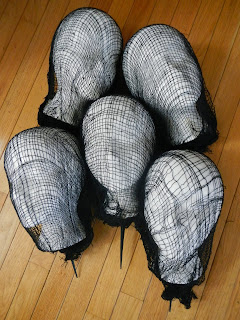 I call them my "merry widows".  I have 9 of these beauties gracing the front of my landscaping right now. 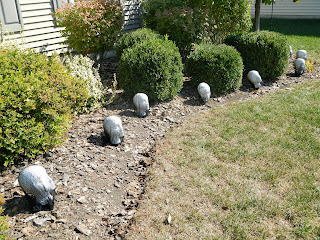 To me, these are the Edgar Allen Poe, or the Hitchcock of Halloween decorations.  They aren't campy and gory.  They aren't startling and loud.  They won't jump out at you for a cheap fright.  They simply exist, and the fabric kind of willows around them, and makes you wonder how they got there.  Are the bodies below?  Are there no bodies at all?  Are they some sort of alien beings?  Can they see you?  Hear you? 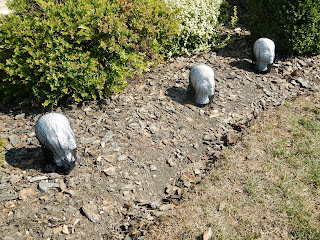 I think I'll name them all Lenore.  Quoth the crafter, "Nevermore".
Posted by Krasimom at 2:28 PM