Nutty Sweetness...Oh, and I Made Chestnut Jam Too.

I have a thing for chestnuts.  And yes, I'm starting to realize that I say that about a lot of foods, but it's true.  Different foods are, in some ways, like books to me.  They can transport me to another place or time, bring back memories, or open my eyes to new horizons.

Chestnuts are one of those foods for me.  They always make me feel like I'm on a picnic in the European countryside, or cooking with an elderly woman in her Italian villa, or walking down the dark streets of London in winter with some roasted chestnuts to warm my cold hands, or snacking with friends in my Parisian dream kitchen (although they never snack in France, so that one is a stretch).  Those fantasies are actually a little odd, now that I think of it, because some of my favorite chestnut snacks come from the Asian market, where I can't read 90 percent of the packages, but if I see a picture of a chestnut, I will snatch it up and gobble it down.  Tiny round pancakes sandwiched with a rich chestnut jam are always the first thing I head for at the candy shop in Chinatown.  But somehow, they still feel very European to me. 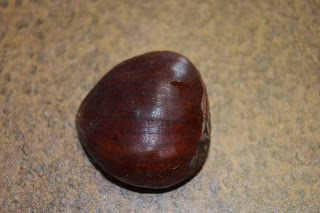 Chestnuts have been around since prehistoric times, and may have been one of the first foods eaten by man.  They have a lot of starch, and they are rich in many vitamins and minerals, including vitamin C, iron, potassium, and magnesium.  They are rich and sweet, and have a flavor different from any other nut out there.

Once, in my little-kiddom, we got some roasted chestnuts from a street vendor in downtown Chicago.  I was not all that impressed.  I'm still not a huge fan of plain roasted chestnuts.  But in almost any application of them, I will gorge myself to the point of minor pain.

So, when I was leafing through the copy of The River Cottage Preserves Handbook that I borrowed from our library and found (among many other amazing recipes) something called "Melissa's Chestnut Jam", I knew that I was all in.  The book had it pictured in a nest of meringue with a dollop of whipped cream on top, but all I could think about was eating it by the spoonful straight out of the jar.  My jar.  Not to share.

Good fresh chestnuts have a pretty short season around here, and aren't always easy to find, even at the right time.  I ran into some at our local Euro-style market, and, not remembering exactly how much I would need for the recipe, got a bagful roughly the size of my torso.  Okay, that may be an exaggeration, but I got about 4 pounds of chestnuts. 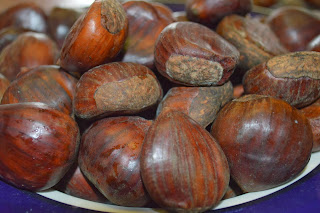 Turns out, I needed two and a quarter pounds.  Don't worry, the rest will be put to good use too.  You know those powdered sugar covered nut balls that pop up on cookies platters all over each winter?  Try making them with chestnuts...you're welcome.

Before you start, have 6 half-pint jars sterilized and ready to can.

So now, a word of warning: chestnuts are delicious, and wonderful, and amazing, and sent from heaven above...but they are an effing pain to work with.  You see, like most nuts, they have a shell.  Under that shell is a skin, and then the meat that you want.  But the skin is very clingy to the meat, and the shell is tough and smooth, making it hard to cut into.  There are 2 main methods to getting the meat of chestnuts: roasting and boiling.  I've roasted before, and cut my finger both slitting the shells before roasting AND while I was peeling the sharp shells off afterwards.  The recipe called for boiling the nuts, so I decided to give it a go.

Use a sharp knife to make a nick in the top, plunge them into boiling water for 2-3 minutes, and then remove and peel them.  It is not as easy as it sounds.  2 hours later, finally finishing my 2 and a quarter pounds (after reminding myself just how much I love chestnuts, and a few episodes of swearing and pretend punching my imaginary elderly Italian counterpart), here are a few tips I have: When you "nick" the top of the nuts, give your knife a slight twist, and it should crack more of the shell easily.  Work in very small batches...like 3-6 at a time.  The hotter they are, the more easily the skin gives way from the meat (not sure why, but I'm guessing it has to do with heating the oils in the nut), so peel them as quickly as you can stand to touch them.  Also, pop in a good movie to watch while you're doing it, or invite friends to help out.

Okay, so once all the chestnuts are de-shelled and skinned, it gets pretty easy.  Throw the chestnuts in a large pan, and fill it with enough water to just cover them.  Bring it to a boil and then let it simmer for about a half hour.  I had to add a little more water to mine along the way...you're going to need about a cup of the liquid later, so don't let it get too low. 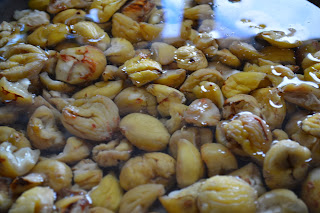 After the simmering, drain the chestnuts and save the liquid.  Put the chestnuts and about a half cup of the liquid into a large bowl/food processor/blender.  Blend it until smooth.  I used my immersion blender, which is one of my favorite kitchen tools.  Set this mixture to the side. In a large pan, pour 6 tablespoons of the liquid and add 2 cups of sugar.  Heat it gently until the sugar dissolves. 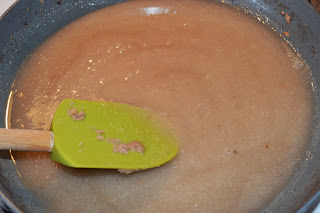 Once the sugar is dissolved, add in the chestnut puree, a teaspoon of vanilla, and 1/4 cup of honey.  Stir it until the mixture is smooth.  I actually hit it again with my immersion blender, just to help move things along. Bring that all up to a boil and let it simmer for 5 to 10 minutes, until it's nice and thick.  It sputters a lot, so watch out! 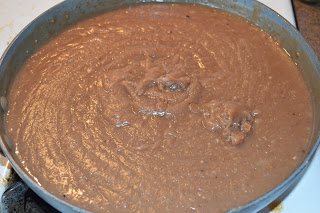 After the mixture thickens, take it off the heat and mix in 1/4 cup of brandy.  Away from any open flame.  This is not a flambe.

Put the hot jam into the sterilized jars  up to 1/8 of an inch from the top and seal them right away.  As they cool, the tops should pop in.  You can Google tips on canning, if you need more explanation on the canning part.  If the tops don't pop and seal, use them right away, and keep all opened jars in the fridge.  The original recipe says that it makes 4 - 8 oz. jars, but I found that I filled those, plus another, plus I had a whole huge bowl to taste test.  Hence why I told you to get 6 jars ready. 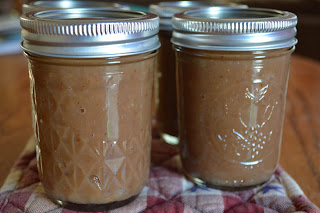 Uses?  So far, I've found the following:  yum on toast, yum on ice cream, yum on apple slices, yum on crackers, yum on tortilla chips, yum on my fingers, yum on a spoon.  Too easy to overindulge on, and watch out for the sugar high when/if you do.  I'm guessing it would be good in a million other ways too.  Mixed into coffee maybe, or hot cocoa.  In some sort of cream sauce over pasta.  As a filling to buttery cupcakes.  Slathered on Channing Tatum.  Endless delicious potential.