Baby, it's cold outside.  Really, really cold.  Which makes it stew weather.

Stews are great.  They are warm and filling, like a cozy blanket for your insides.  I love curling up with a bowl of savory goodness and watching the snow fall from the comfort of my warm kitchen.

This chicken stew is one of the favorites around my house, as far as stews go.  Probably because of the pierogi.  I mean, you can't go wrong with a good pierogi.  They're potatoes wrapped in pasta...I could practically live in them and die of carb happiness.  I'm not going to lie to you here, homemade pierogi are amazing.  I used to work as a teacher in an area in the city that had a large concentration of Polish immigrants, and I have tasted some fantastic pierogi.  Thank goodness for cultures that like to feed the people who teach their children!  However, also from personal experience, making homemade pierogi is not the easiest process.  And, as much as I like spending all day in the kitchen, I also like meals that you can get on the table in a decent amount of time on busy days.  Fortunately, there are a lot of good natural brands of pierogi in the freezers of grocery stores these days.  Not quite as good as homemade, but still pretty darn delicious.  Peter and Pat's pierogi are the ones I've been using lately, after discovering them at a Sam's Club exhibit thing.  For this recipe, I would go with either onion or cheddar pierogi.

Okay, I got a bit ahead of myself there.  Let's get to the stew.

Grab a big, heavy bottomed pot.  I like using my cast iron enameled pot, for the easy cleaning and the even heat.

Chop up some bacon.  At least a half pound.  Is there ever too much bacon?  Since there's no such thing as leftover bacon at my house, I usually try to arrange this for the night before I make some kind of bacon muffin or waffles that don't use a full package of bacon either.

Put a bit of olive oil in the bottom to heat.  Add the bacon and cook about 5 minutes, until crisp. 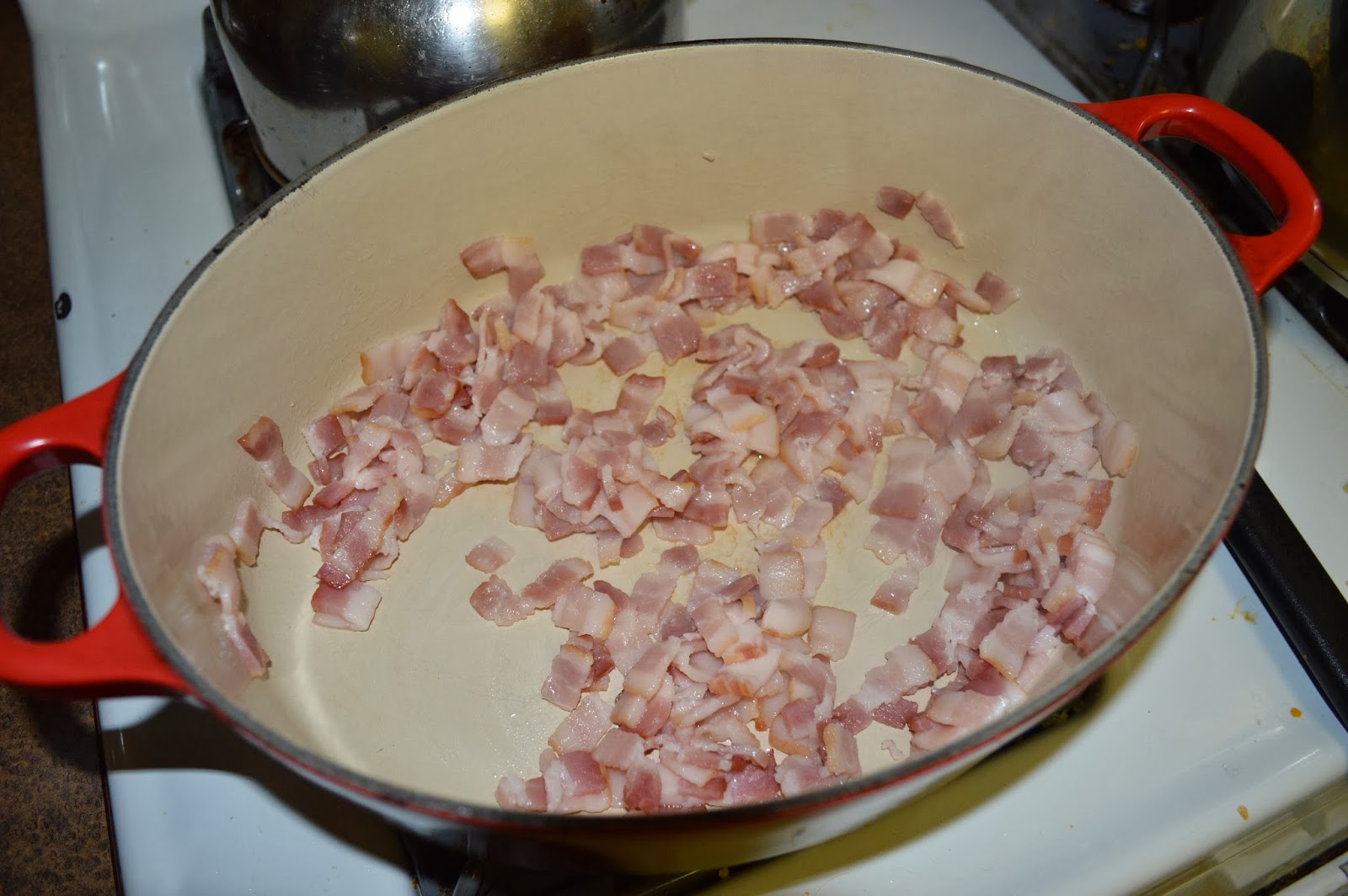 While the bacon's cooking, slice up some boneless chicken.  Breasts, thighs, whatever you have on hand will do.  2-3 pounds of it.  (Trust me, you'll want the leftovers of this!)  Toss the chicken, along with a little salt and pepper, in with the bacon and let it cook for another 5 minutes or so, until it's browned.

While the chicken's browning, chop up 3 medium onions and 3 or 4 carrots, then smash and chop 6 cloves of garlic.  Add all that, along with 2 tablespoons or so of paprika, a tablespoon of cumin, 2 bay leaves, and a teaspoon of dried oregano into the pot.  Cook for about 5 more minutes, until the veggies start to get tender. 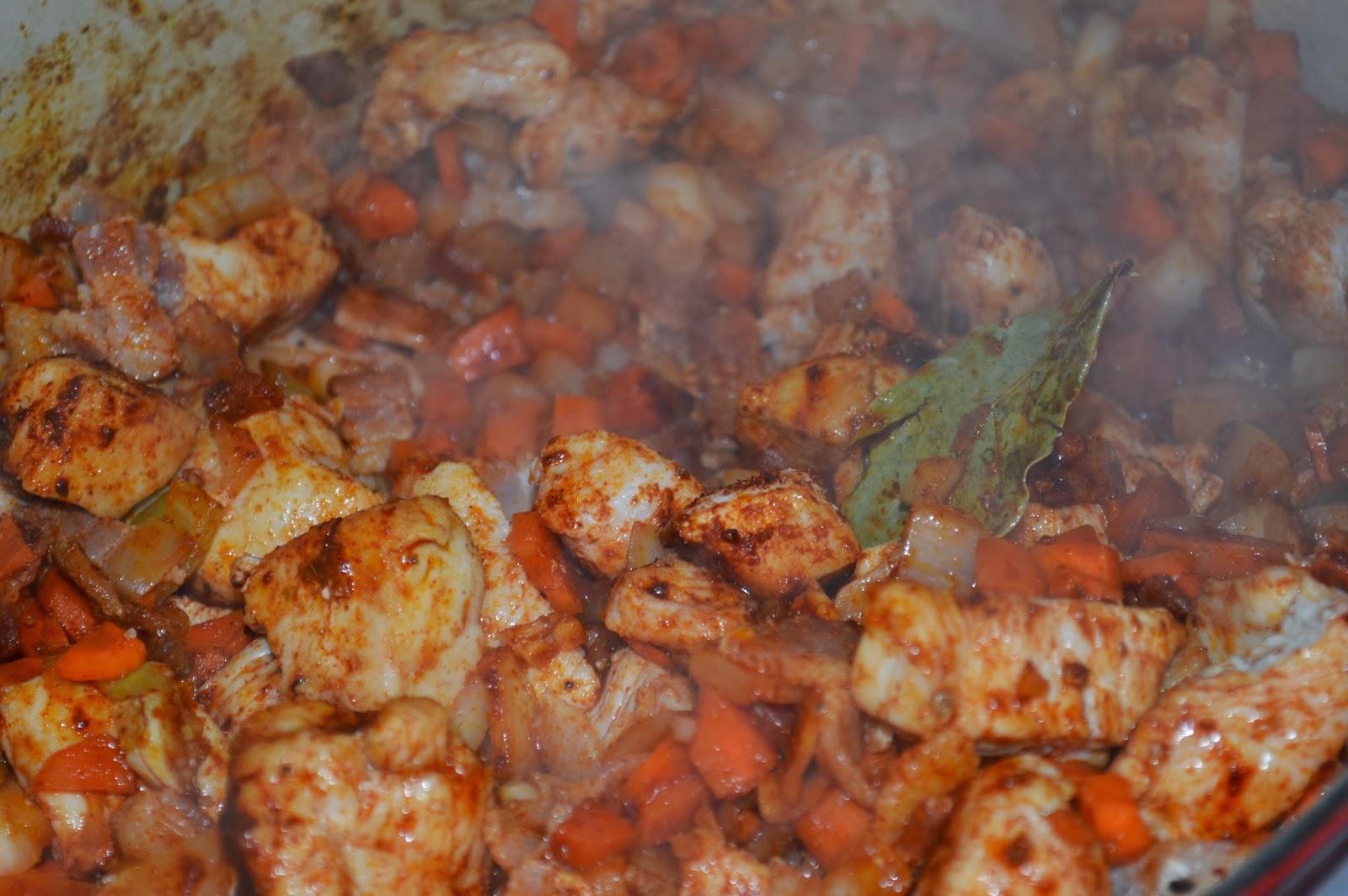 Make a little well in the center of the mix, and add some more olive oil.  Mix a couple of tablespoons of flour into the olive oil, then mix that into everything. 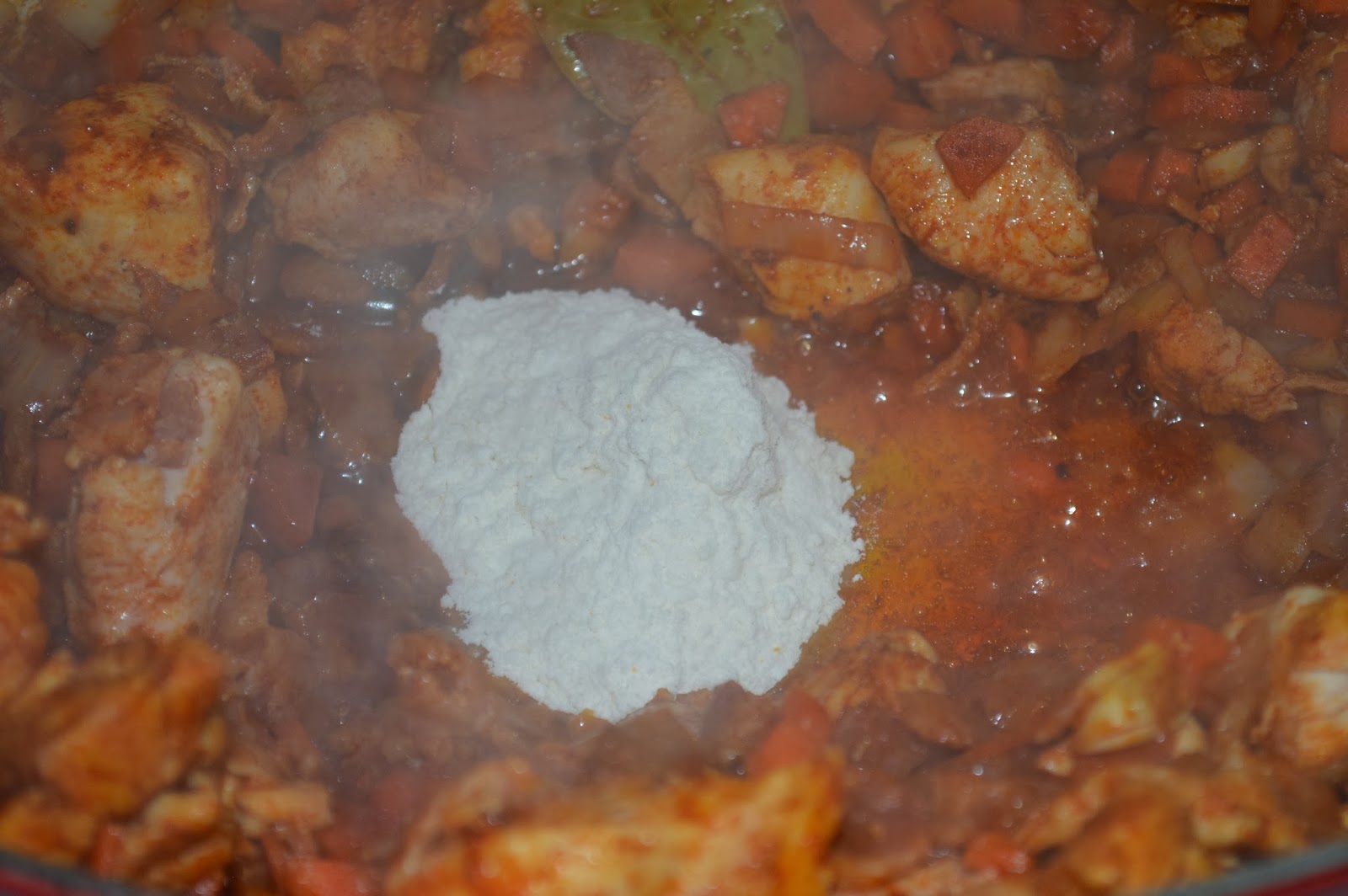 Add 2 1/2 cups of chicken broth and a small wine glass of white wine into the mixture, along with a can or jar (or package from your freezer) of crushed tomatoes.  Stir it well, bring to a boil, and then cook over medium heat for 20 minutes. 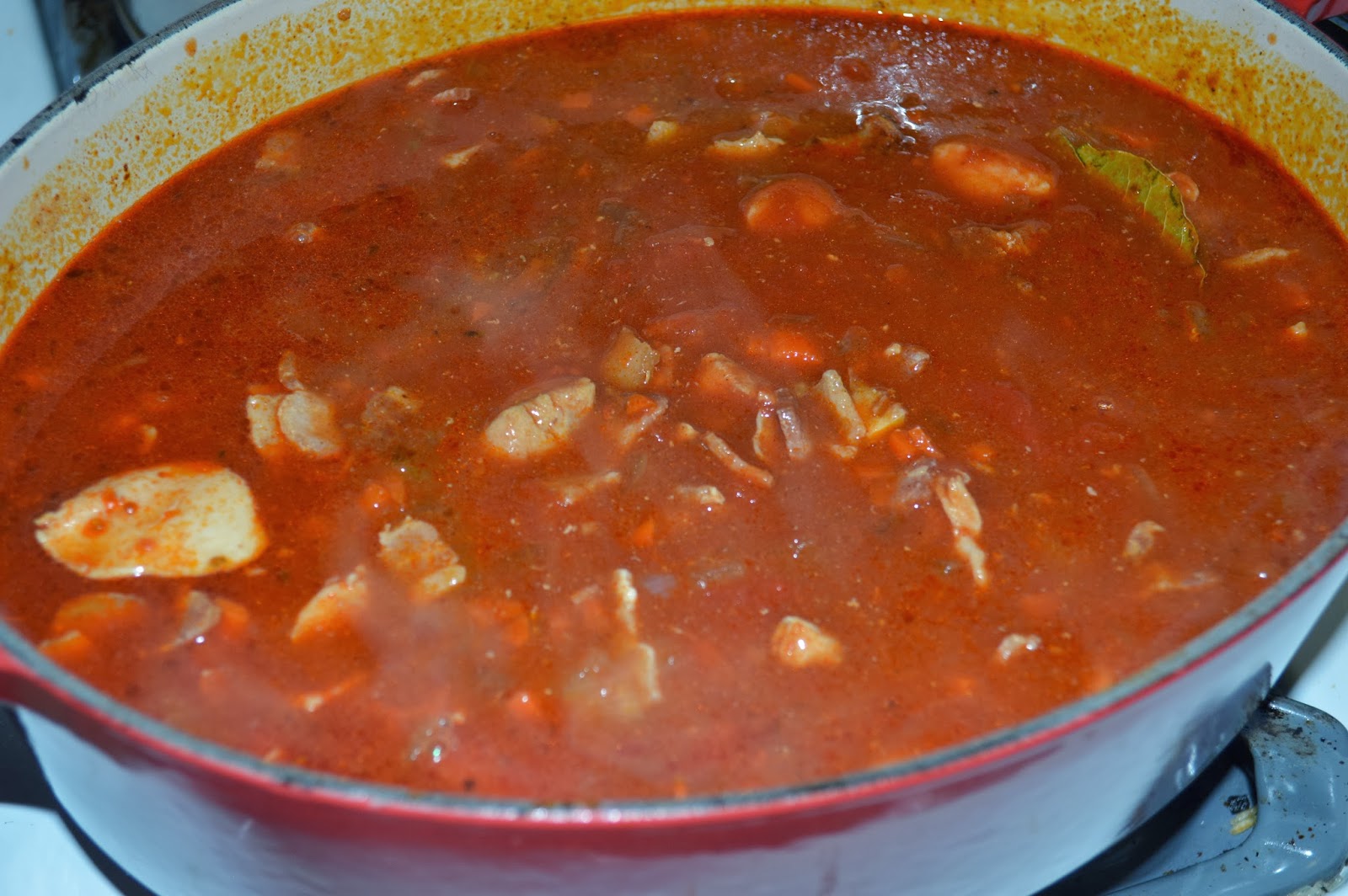 While that's stewing, cook your pierogis according to the package directions.  I usually go for the pan fried method, because I like the crisp against the stew.  I put some butter and olive oil together in a large pan (need lots of flat surface for lots of pierogi!) until the butter melts, then line it with pierogi.  Cook 'em for about 5 minutes, flip, and then cook for another 5 on the other side.

To serve, ladle the stew into a bowl, top with some pierogi, a dollop of sour cream, and some parsley, if you happen to have it on hand. 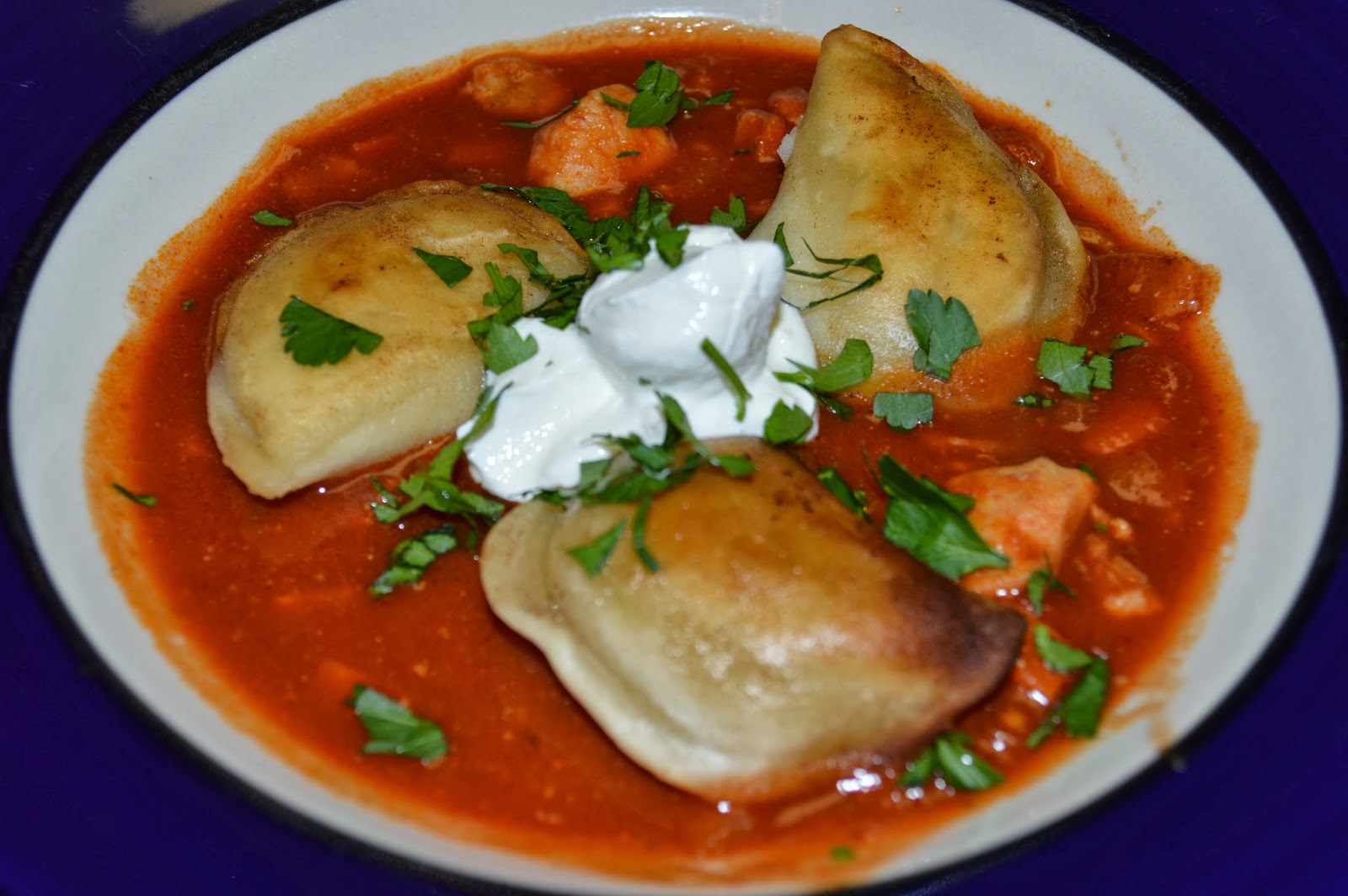 And there you go.  The perfect meal to warm your soul on a cold evening, and it can be ready in less than an hour.  This is also one of those dishes that somehow manages to taste better as leftovers, when the flavors have more time to meld together, so be sure you have more pierogi on hand, although I have enjoyed it over rice in a pinch.

Grab a bowl and a spoon, and dig in to a big honkin' serving of comfort!