One of the most frustrating thing about being a good home cook is that I try so many recipes that a lot of times, even if my family completely loves a dish, they forget about it.  That's why, when there's a dish that they request, or that they get excited when I mention, you know it's a winner.  My homemade chicken pot pie is one of those dishes.  I'm pretty sure it is on the list of reasons that my husband asked me to marry him.  It's just that good.

The story behind the origins of this recipe are funny.  Both haha funny and odd funny.  You see, in high school, I worked at JC Penney...in the housewares department.  Most teens would prefer to be surrounded with trendy clothes, but I was in my happy place seeing all the new kitchen gadgets, designing displays matching dishes with table linens, and restocking small appliances.  But, to be honest, it was slow a lot of the time, and there's only so much cleaning, restocking, and straightening that can be done.  So, if I had finished all that and was still bored, I would flip through the cookbooks.  That's where I found the original chicken pot pie recipe...in one of those cookbooks.  And I copied it down on a piece of spiral paper that traveled with me to college and to my first house with my husband, adding notes and tweaks along the way.  Of course, that was many years ago, and all I remember about the cookbook now is that it had something to do with farms.  I changed the recipe quite a bit too, with all my "tweaks", but the method stayed the same.

The crust stayed the same as well.  It was pretty much perfect to begin with, and it makes the pie.  Of course, as a high school student, I didn't have a food processor, so I did the first step all by hand back then.  It's much easier with a machine.  Put 1 1/2 cups flour and 2 teaspoons of salt in a food processor and give them a couple of bursts to blend them. 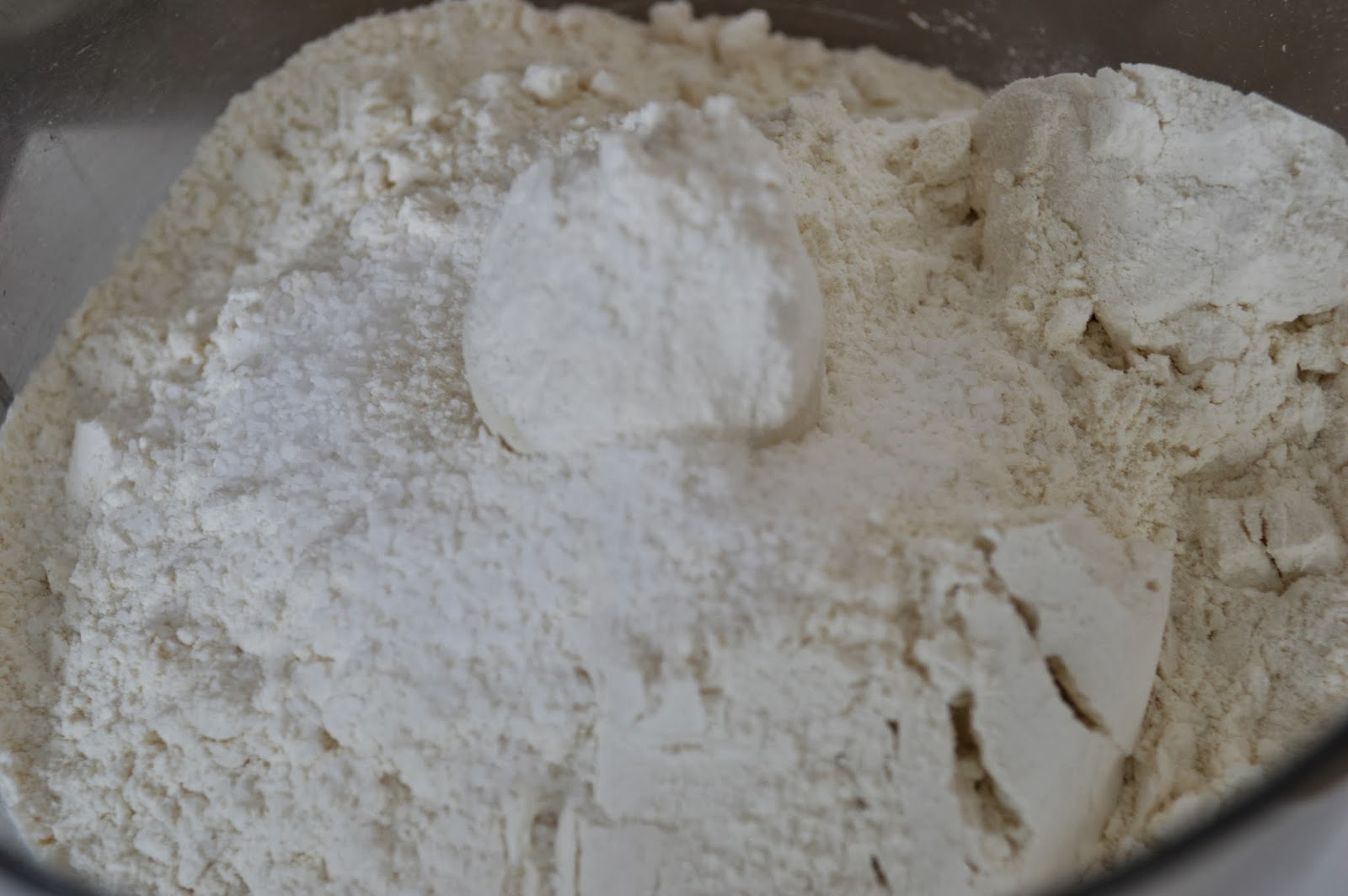 Slice in 8 Tablespoons cold butter and process for about 8 seconds.

Then add 1/4 cup of ice cold water and process for a quick 3 seconds or so more, until the dough starts to stick together. 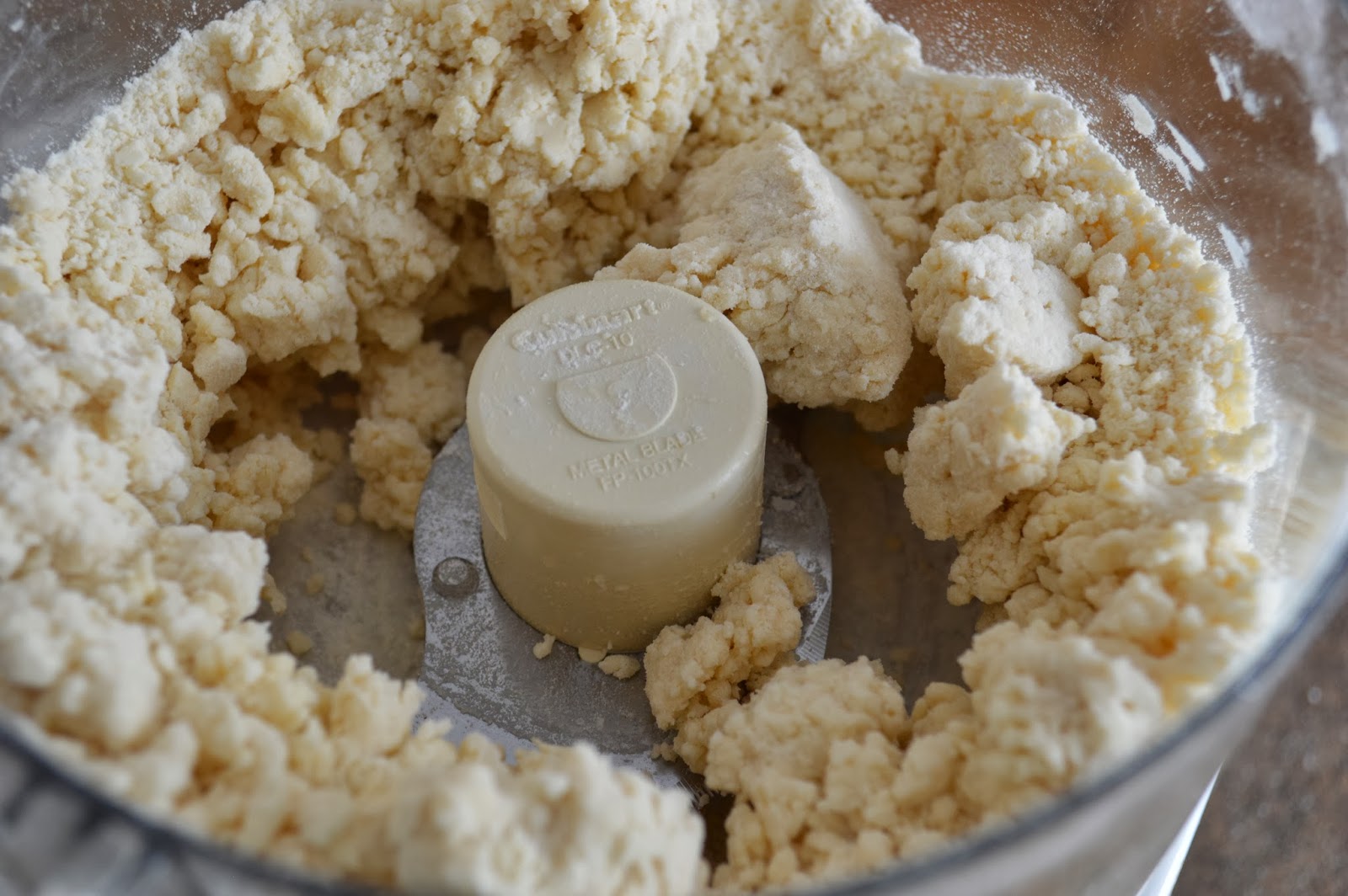 Move the dough to a floured surface, and knead it until the butter is incorporated and it all sticks together.  Form it into a disc, wrap it tightly in plastic wrap, and put it in the fridge for at least 2 hours. 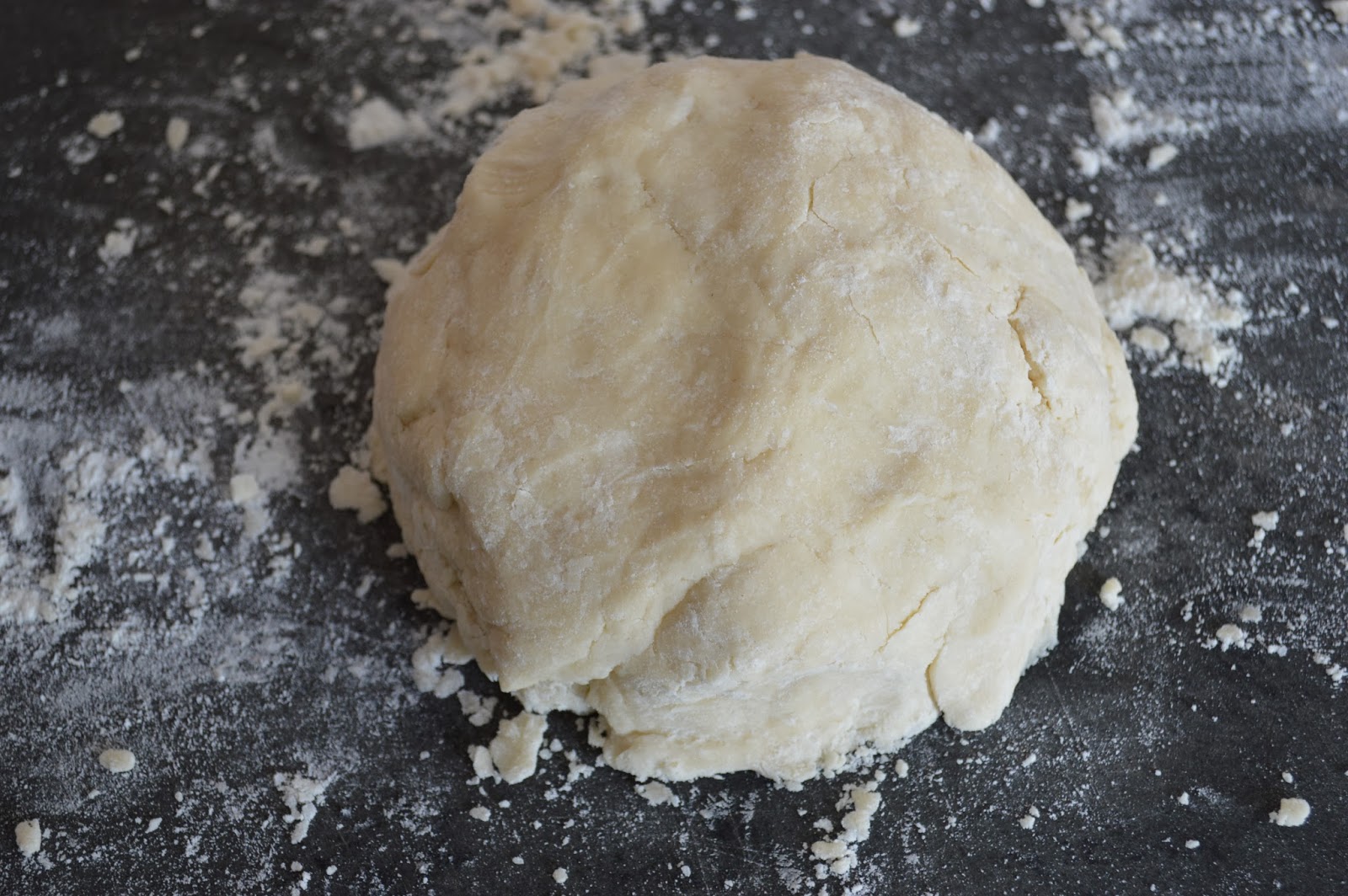 The filling part takes about a half hour of work, and then the whole pie takes another 40 minutes or so to bake, so figure you need to start the dough at least 3 1/2 hours ahead of when you want dinner.  I can usually whip up the dough in the morning and let it set all day in the fridge.  Some days, I even make the filling ahead, pop it in the fridge, and then pull it out a while before baking to let it warm up while I get the crust ready.  You could even prep the whole pie ahead and then pop it in the oven for a few extra minutes.

So, on to the filling.  In a saucepan, bring a cup and a half of chicken stock to a boil.  While that's warming, chop a pound of boneless chicken into 1-inch pieces.  Add the chicken to the stock and boil about 10 minutes, until the chicken is cooked through.  Remove the chicken with a slotted spoon, keeping the stock in the pot, and set the chicken aside where it will stay warm. 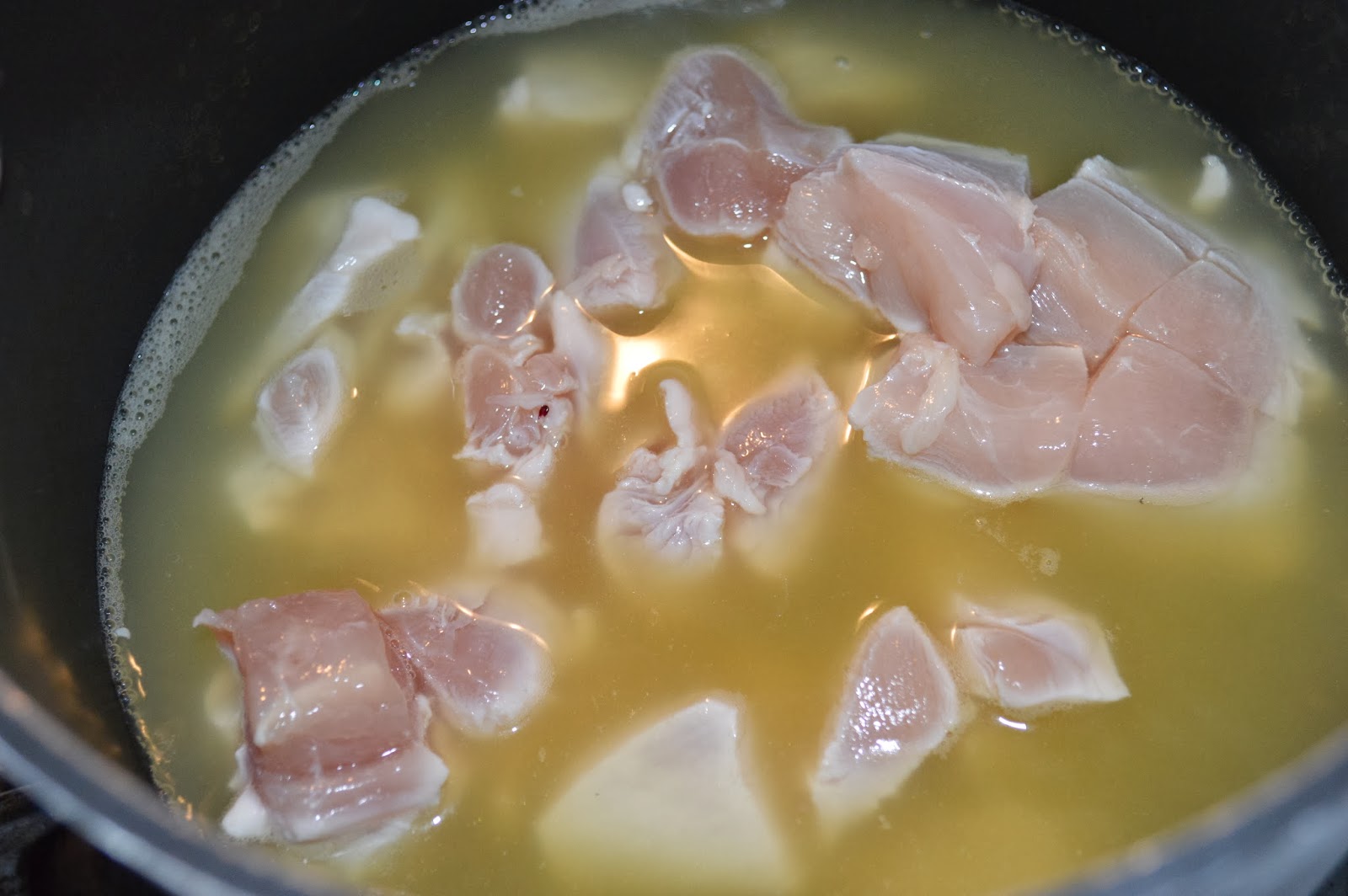 While the chicken is cooking, finely chop an onion. 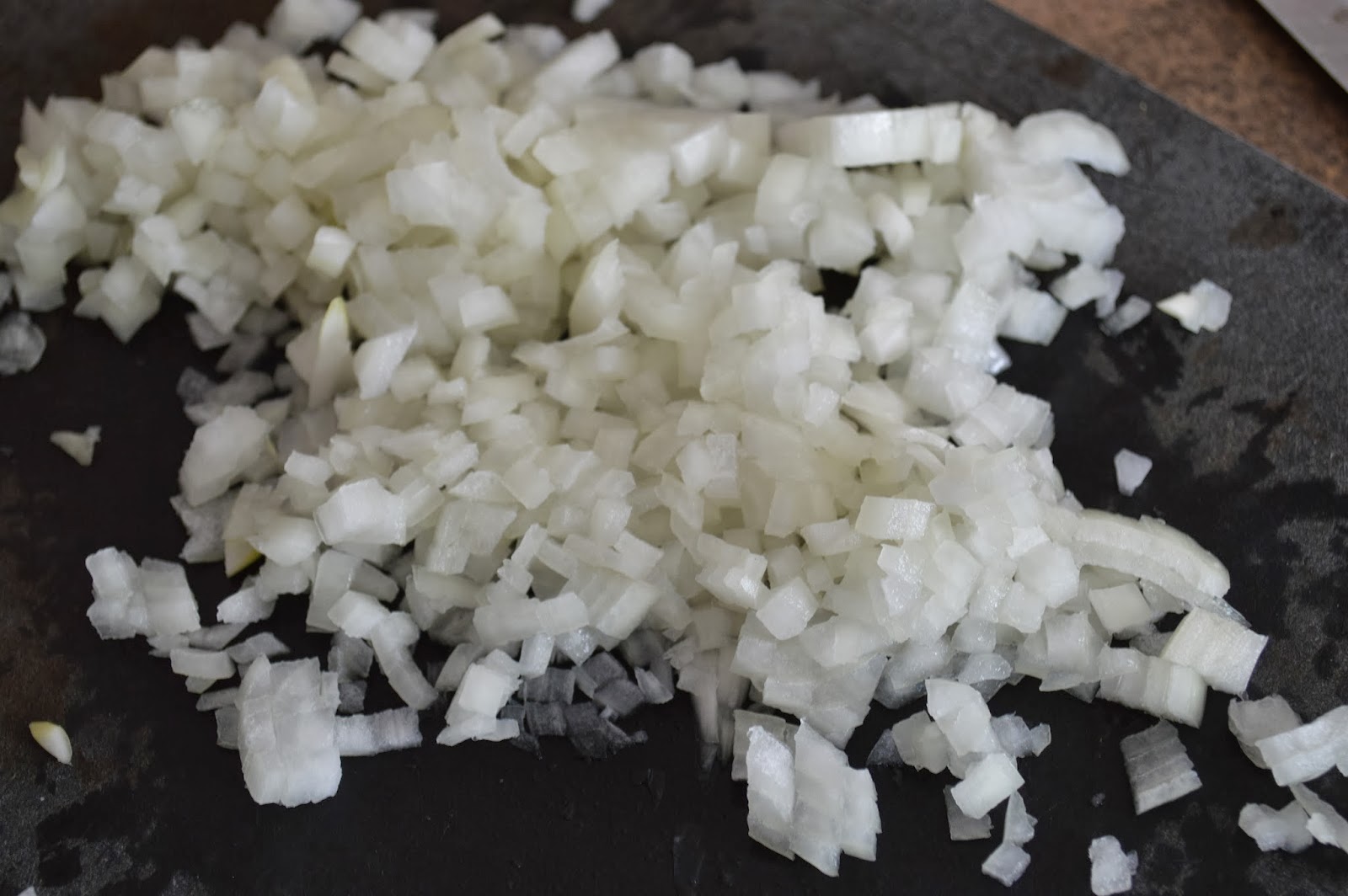 If there's extra time, you can get started on peeling a potato and a carrot and chopping those into 1/2 inch dices as well.  You can also take out some frozen vegetables to start thawing a bit while you work.  I go with peas, sometimes corn as well.  About 3/4 cup of those total.

In a saucepan, melt down a half stick of butter (4 Tablespoons) over medium low heat.  Add the onion and cook it for about 5 minutes on low, until it is softened.  Sprinkle 3 Tablespoons of flour over the onion and butter, and cook and stir for 2 more minutes.

Slowly add the broth into the mixture, stirring the whole time.  It should thicken up to a nice sauce. 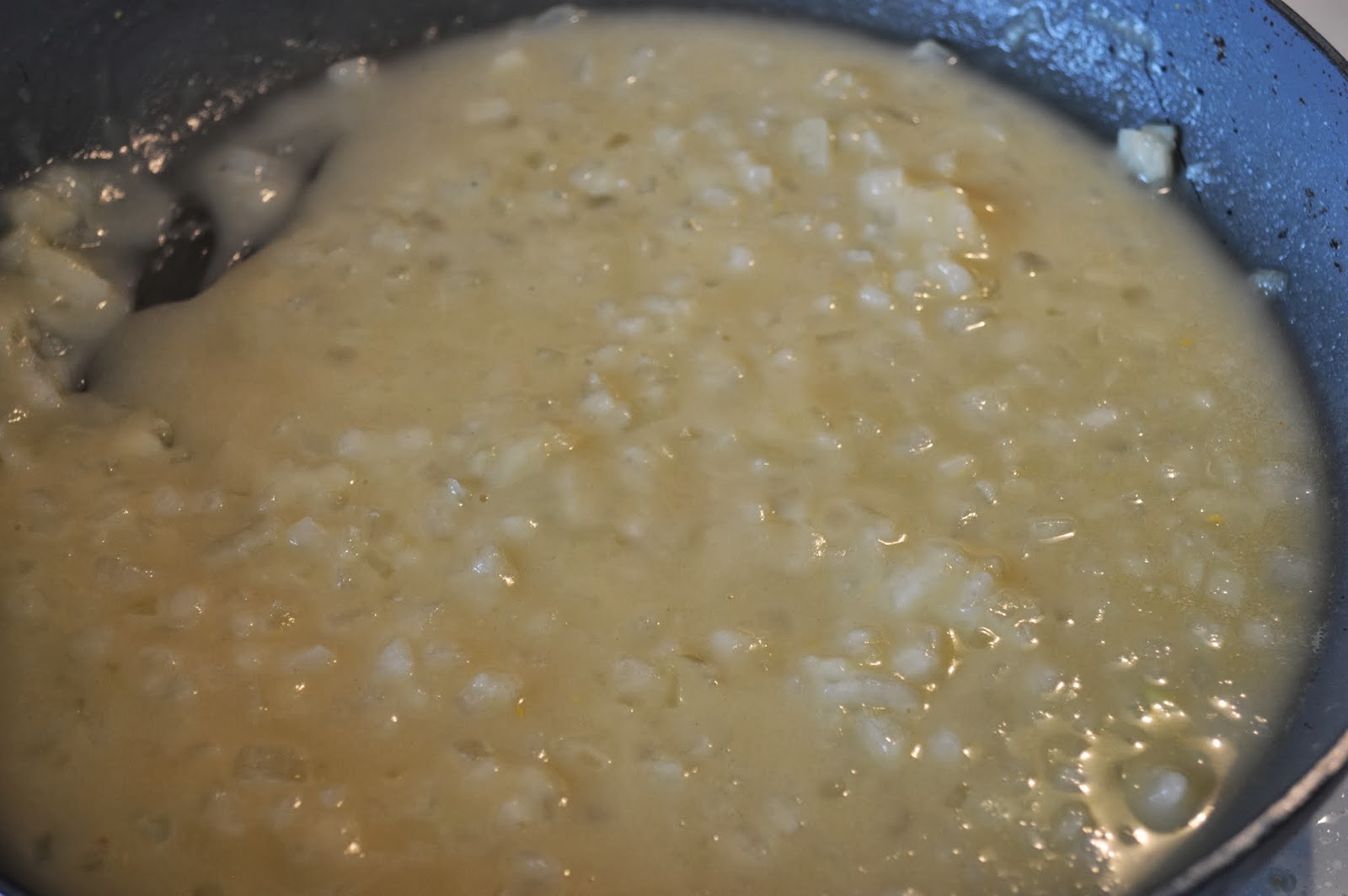 Add the carrots and potatoes and simmer for 5 minutes. 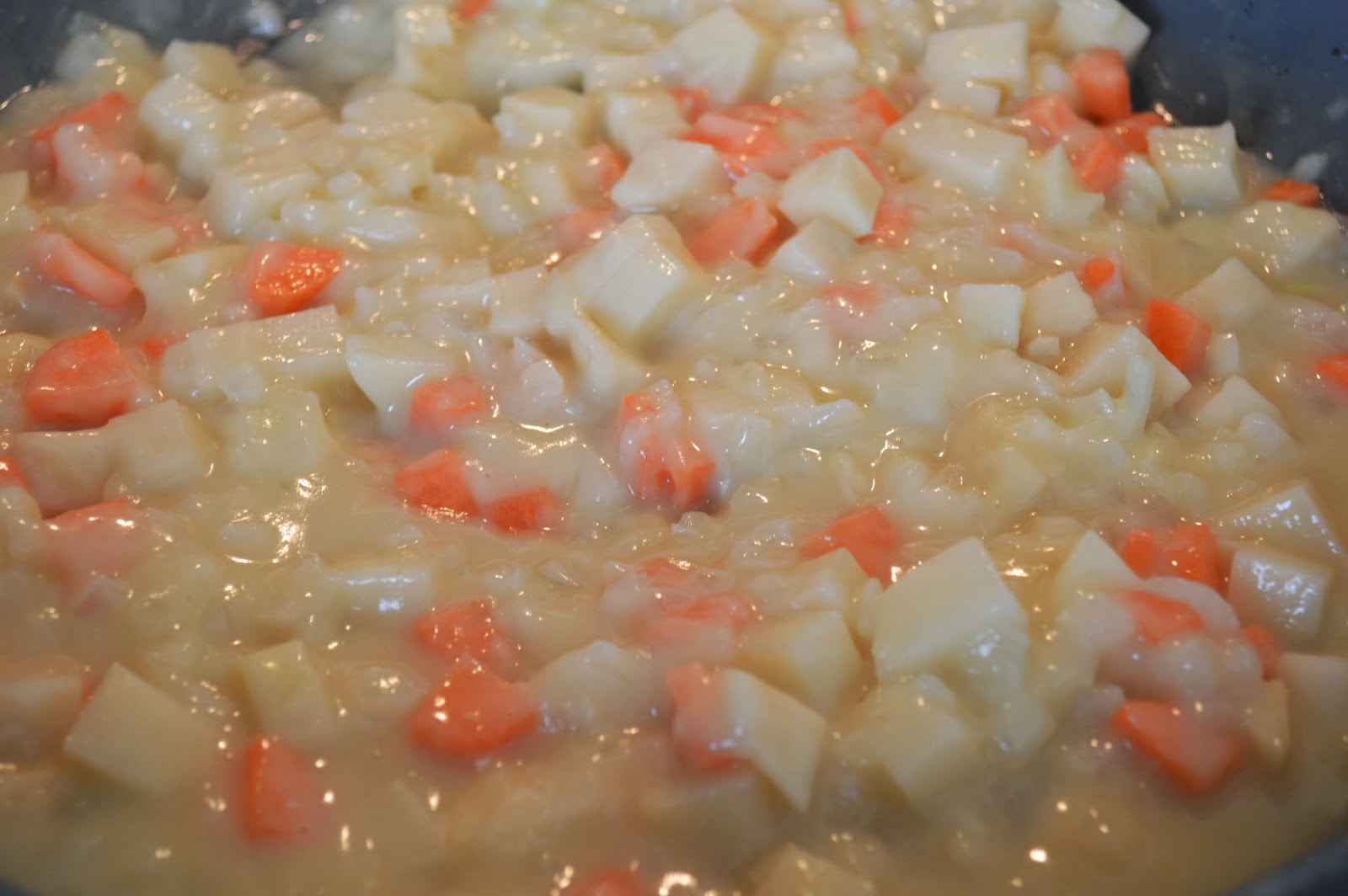 Chop up some fresh chives and parsley. 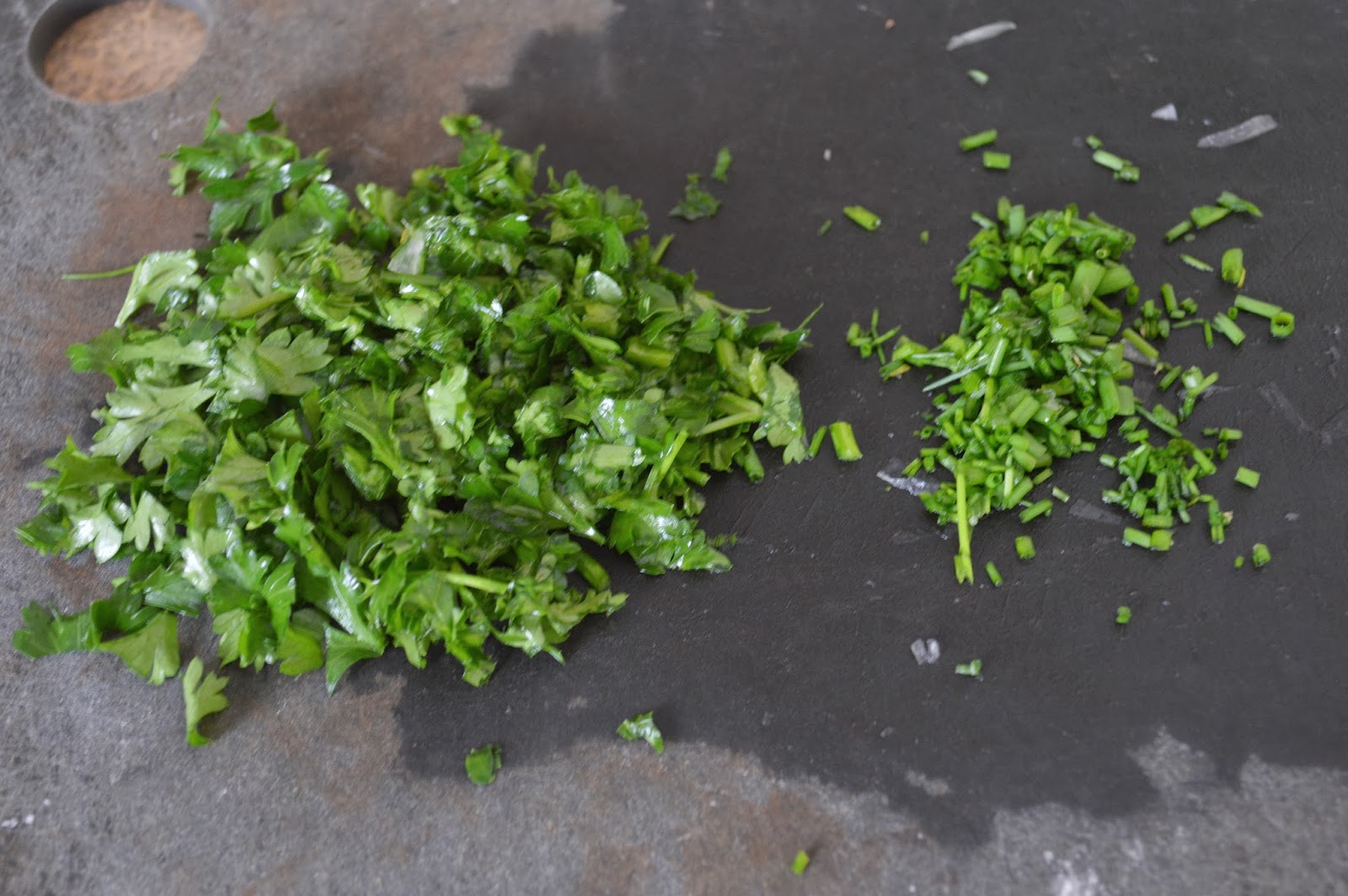 Add the slightly thawed frozen veg (or fresh, if you have it), the herbs, the chicken, some poultry seasoning or dried sage, and salt and pepper to taste. While I'm usually a salt fan, it doesn't need much here because  the crust is rich and salty, and the chicken stock will have reduced and the saltiness intensified as well.  Simmer for a minute or two to warm it all through. 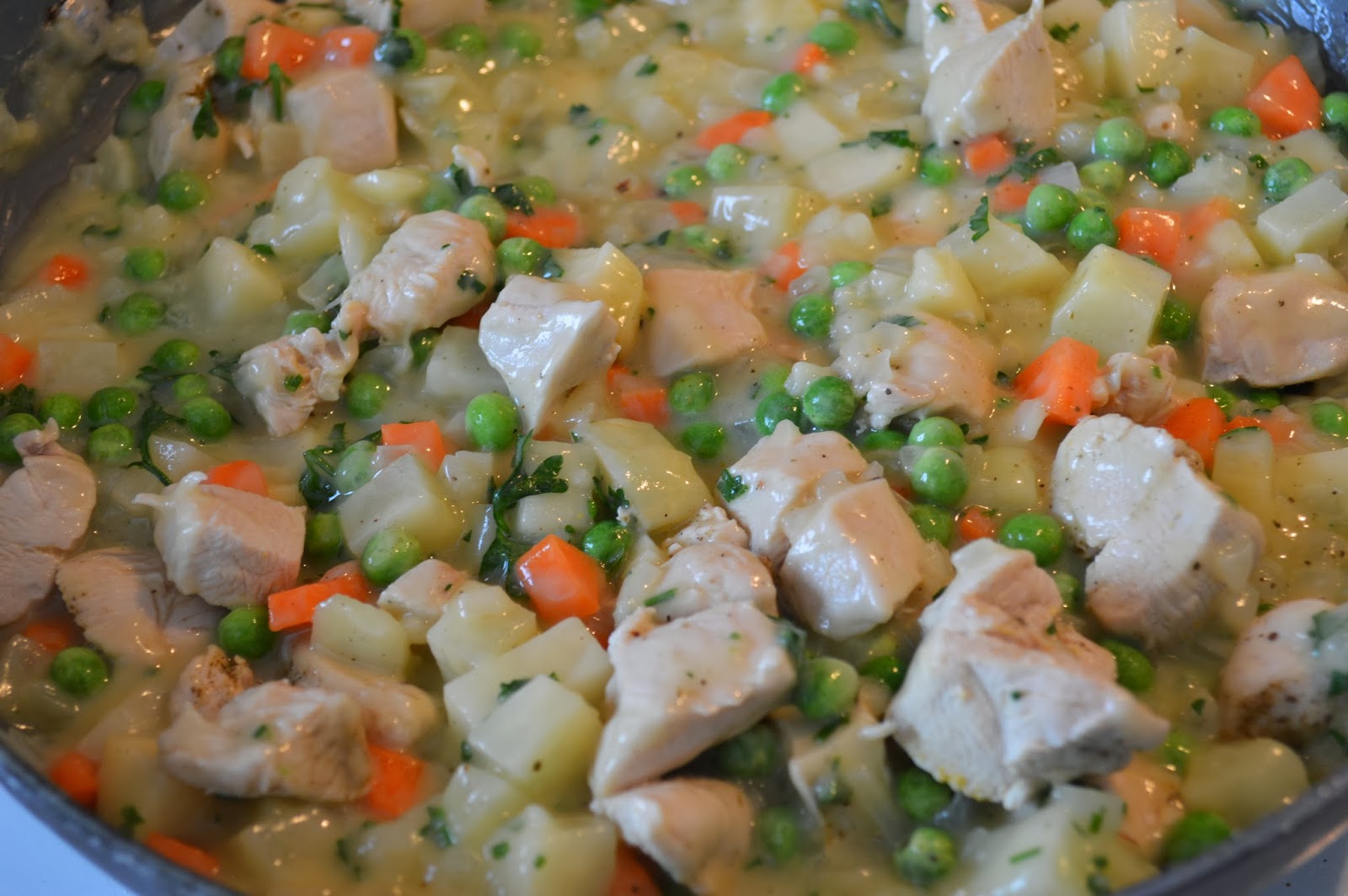 Pour the filling into a deep pie plate or a casserole dish. 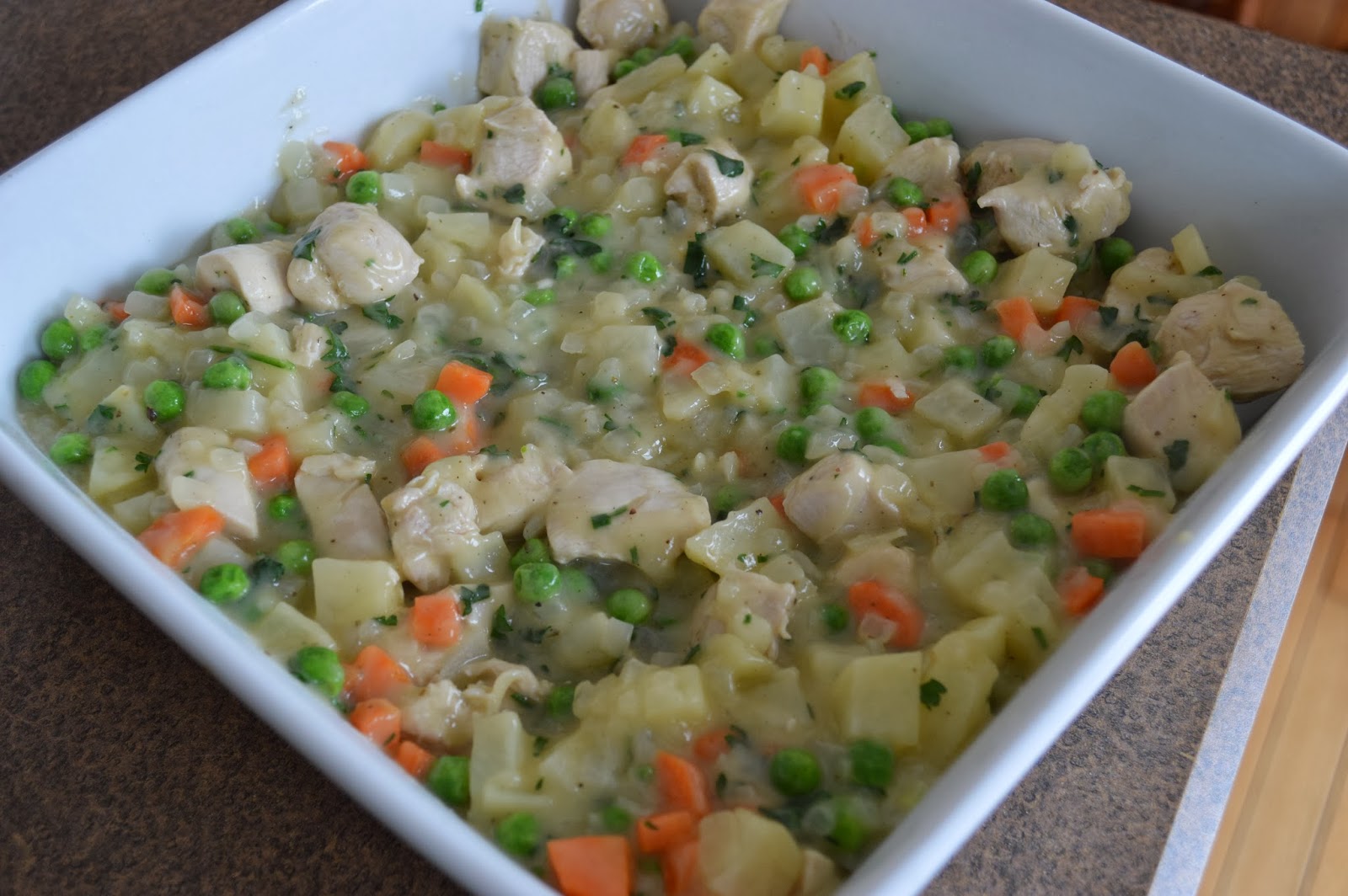 Roll the pastry out on a floured surface to about 1/8 inch thickness.  I have a nice heavy marble rolling pin that was my grandmother's, and it's perfect for this because the dough is a tough dough.  You don't want it to warm too much, because it will get sticky, but it is almost impossible to roll straight out of the cold.  Be patient, it will get there.

Spread the dough over the dish.  Cut off the excess dough, if there is any, and cut some slits in the crust.  Straight or fancy, your choice. 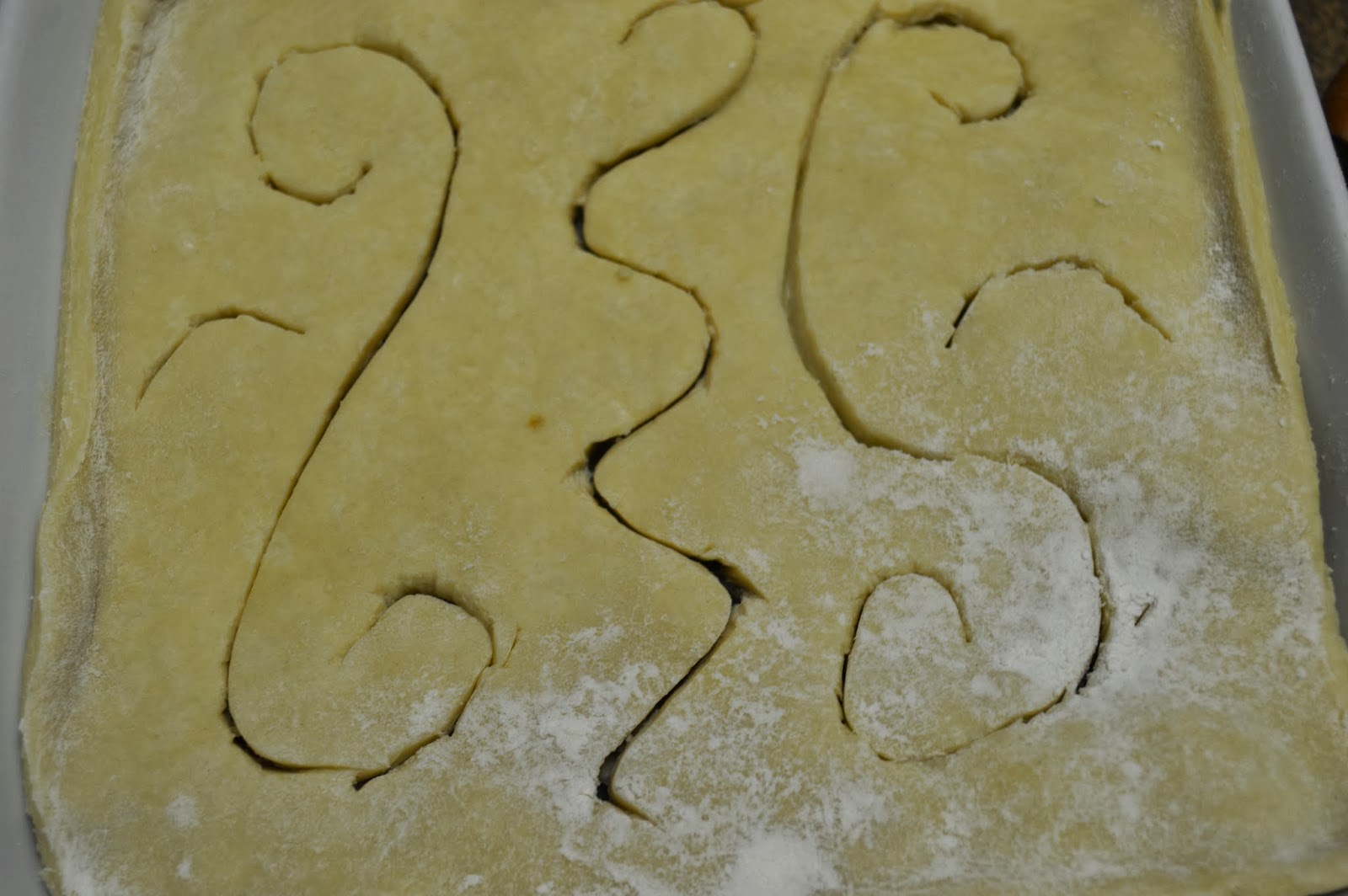 If you have extra dough, you can take a small cookie cutter and make fun shapes to decorate your pie.  I'm all about the love here, so I went with hearts.  You could also do different crust effects, like a latticework crust, if you want to get extra impressive.  I usually tend towards quick and easy. 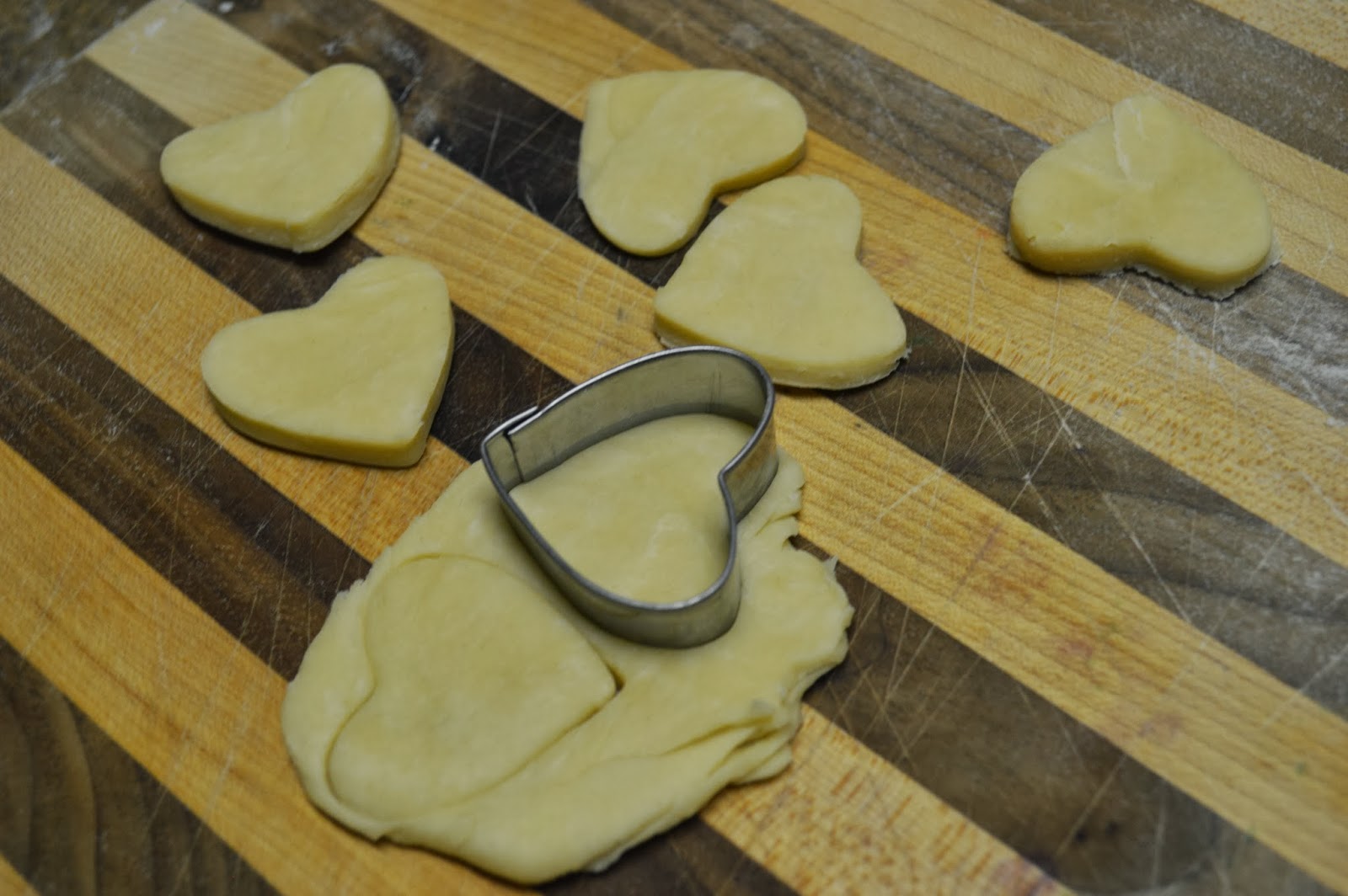 In a small bowl, mix an egg yolk and a Tablespoon or so of milk with a fork. 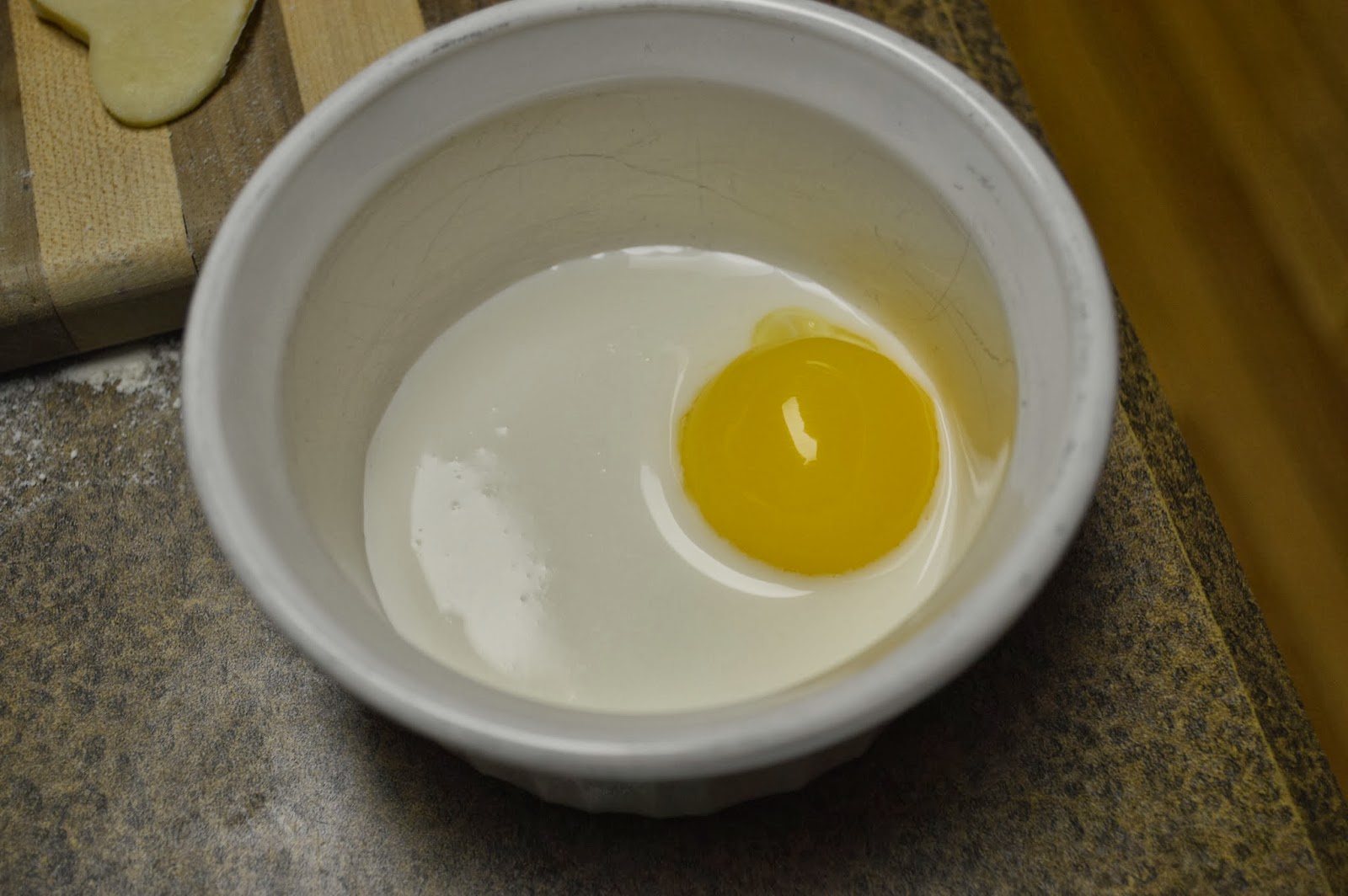 Brush that egg mixture over the top of your crust.  It also makes a good glue to stick on your fun crust decos. 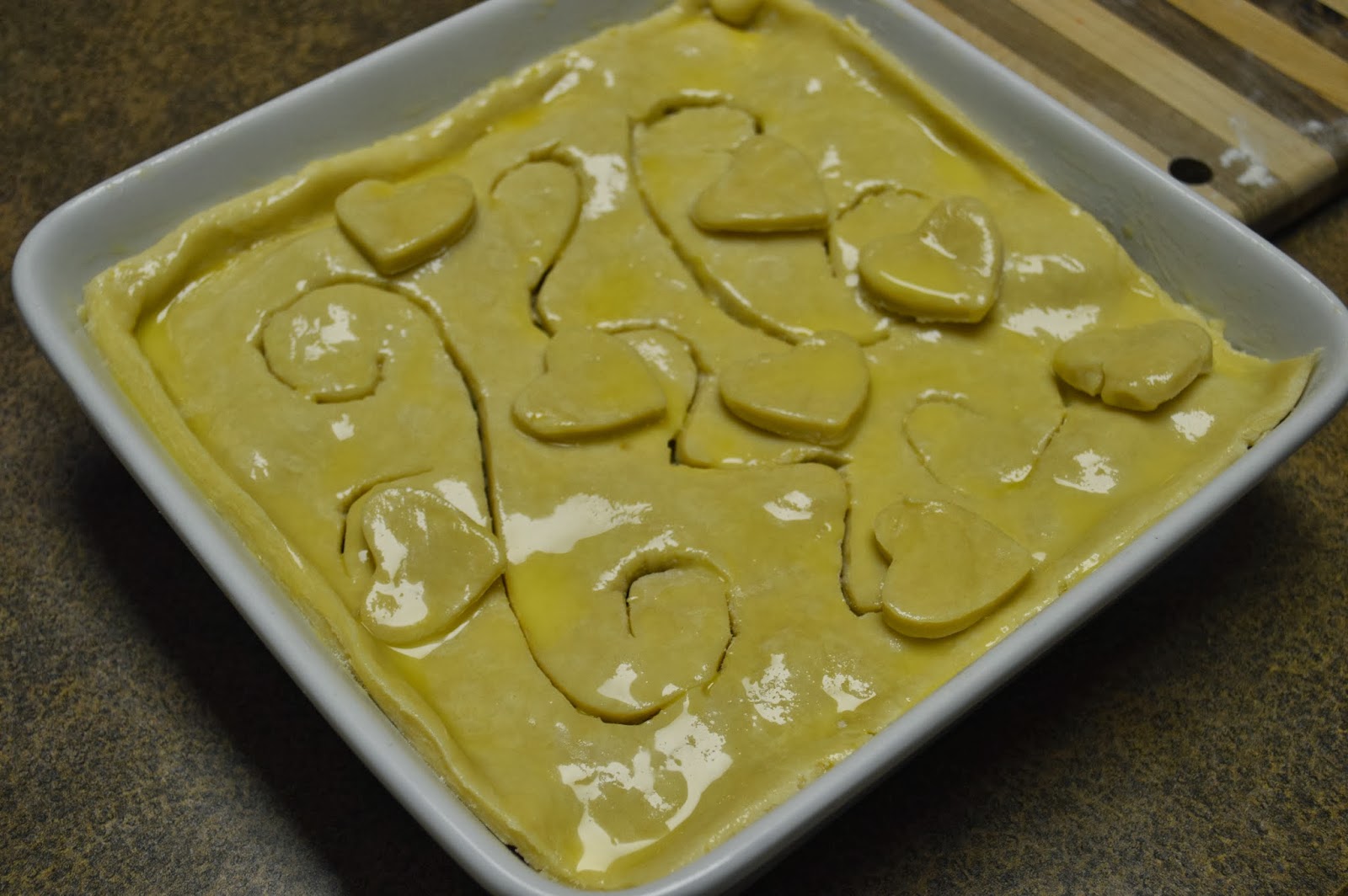 Bake at 350 for 30-40 minutes, until the crust is golden.  If you're using a pie plate, you might want to have a baking sheet with edges under it in case it bubbles over. 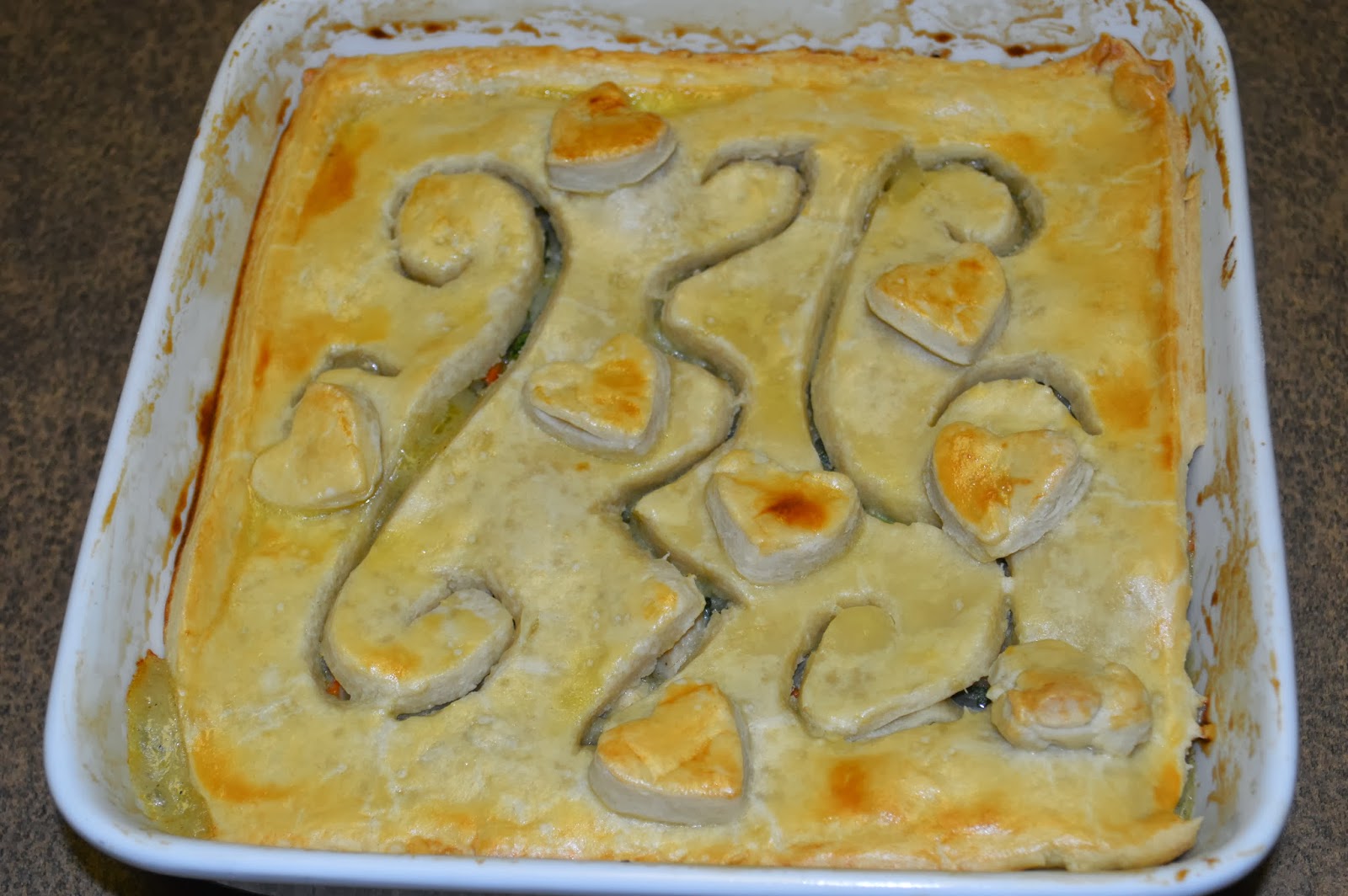 Slice and serve, but be careful of lava hot filling.  Delicious, but burny. 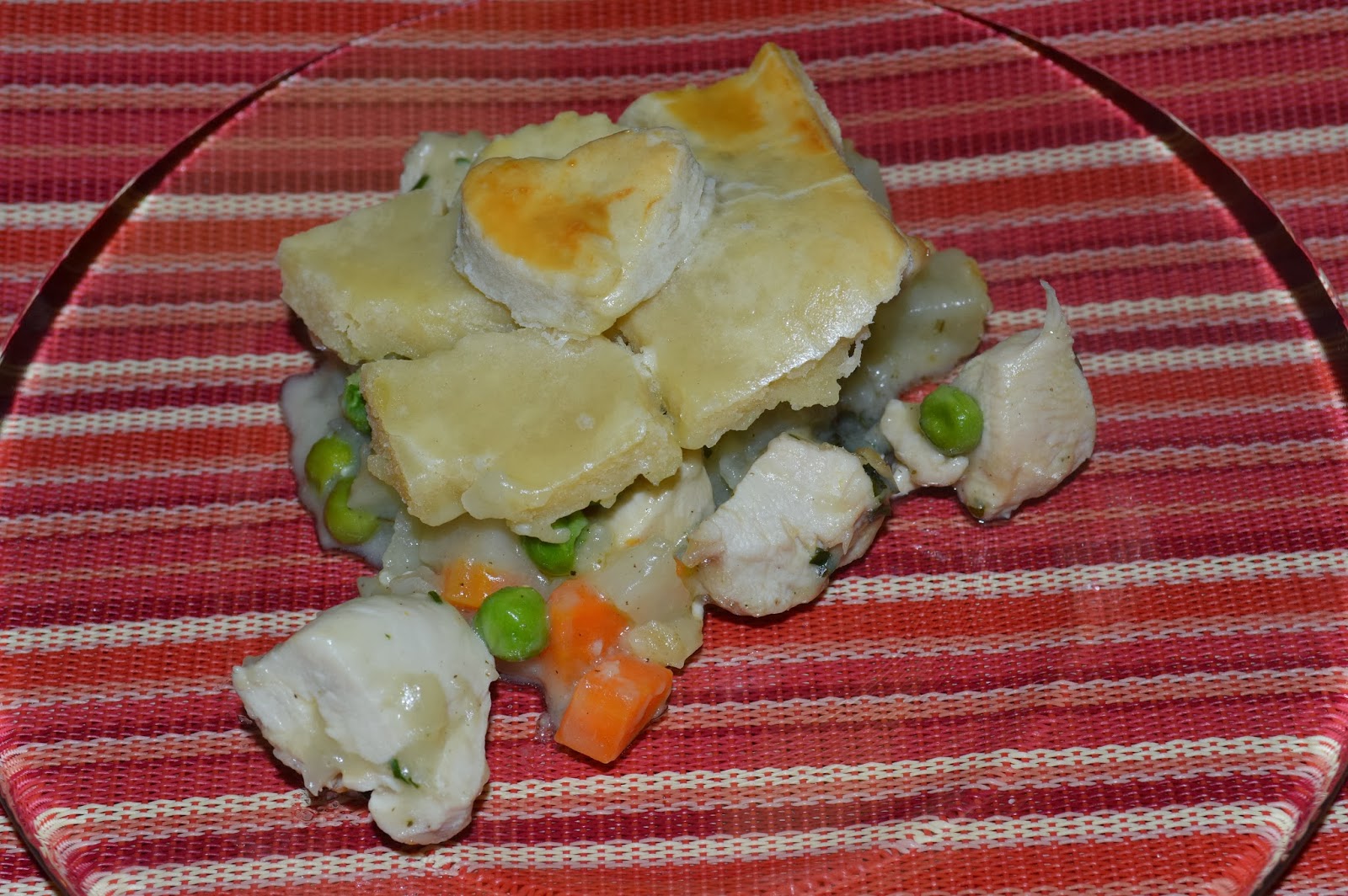 Sift together flour and salt in a a food processor.  Add butter and process for 8 seconds.  Add water and process a few second more, until it starts to stick together.  Move dough to a floured surface and knead it to bring it together.  Form into a disc, wrap in plastic wrap, and refrigerate for at least 2 hours.

Pour broth into a saucepan and bring to a boil.  Dice chicken into 1 inch chunks.  Put chicken into the boiling broth and cook for 10 minutes, until the chicken is cooked through.  Remove chicken with a slotted spoon and set aside.  Reserve broth.

Heat the butter in a saucepan.  Dice the onion finely and cook in the butter for about 5 minutes on low heat.  Sprinkle flour over the mixture, stirring constantly for 2 minutes.

Slowly add warm chicken broth to the onion mixture, stirring the whole time.  Add the carrot and potato and simmer for 5 minutes.  Add the other veggies, the herbs and spices, and season to taste.  Simmer another minute or two.

Pour filling into a deep pie pan or a casserole dish.

Roll out the dough to 1/8 inch thick, shaped to cover the dish.  Spread dough over the dish, trimming any excess.  Slit top.

Mix egg yolk and milk in a small bowl and brush mixture over the crust.