There's a Leek in my Stroganoff!

So, you know how much I like to share quick, easy, yummy dinners that my family enjoys, right?  I kind of look at this blog as a small part of my legacy...a sort of recipe memoir online that my kids will be able to reference when they're grown up and on their own and craving a taste of home.

On that note, this recipe is one that pops up for dinner probably every other week.  It takes less than a half hour, and if I set my rice cooker and have a teeny bit of prep work done, I can cut that down to under 20!  And it's the kind of dinner that wraps you up like a warm, comforting blanket of creamy deliciousness and soothes all that ails you.

I'm just going to jump right into the recipe.  The original recipe is from Jamie Oliver, which is just icing on the cake for me, since I have a minor chef crush on him.

First, start some rice.  Rice cooker or stovetop, whatever suits your schedule and mood.  Get it cooking and then leave it while you make the stroganoff.

Clean and chop up some leeks into half moons.  At least 2 decent sized ones.  If you're not familiar with leeks, they are like a gentle, unassuming cousin of an onion.  Subtle, but unmistakable.  One of my favorite ingredients...I literally squealed with delight when I was able to grow my own in my home garden last year.  TO prepare them, you want to cut off the rooty end, and the green tops.  The only parts that you want to use are the white and lighter green parts.  Cut the leeks in half down the length, dispose of the outer layer, and then run water through the other layers, fanning them under your faucet.  Give them a shake dry, and then go on with your slicing. 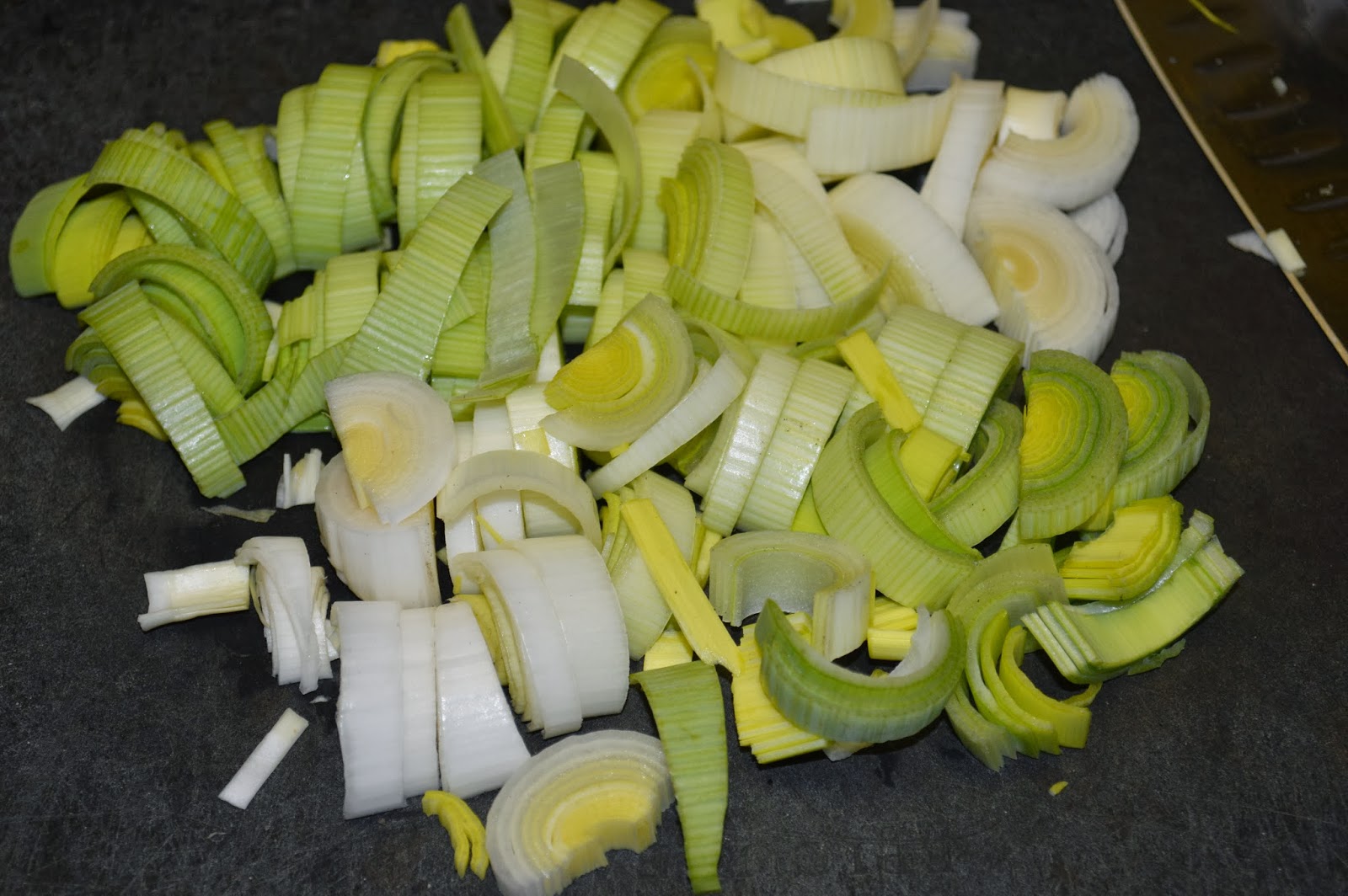 In a large saucepan on medium heat, melt some butter and olive oil.  Okay, you're not exactly melting the olive oil, but you know what I mean. 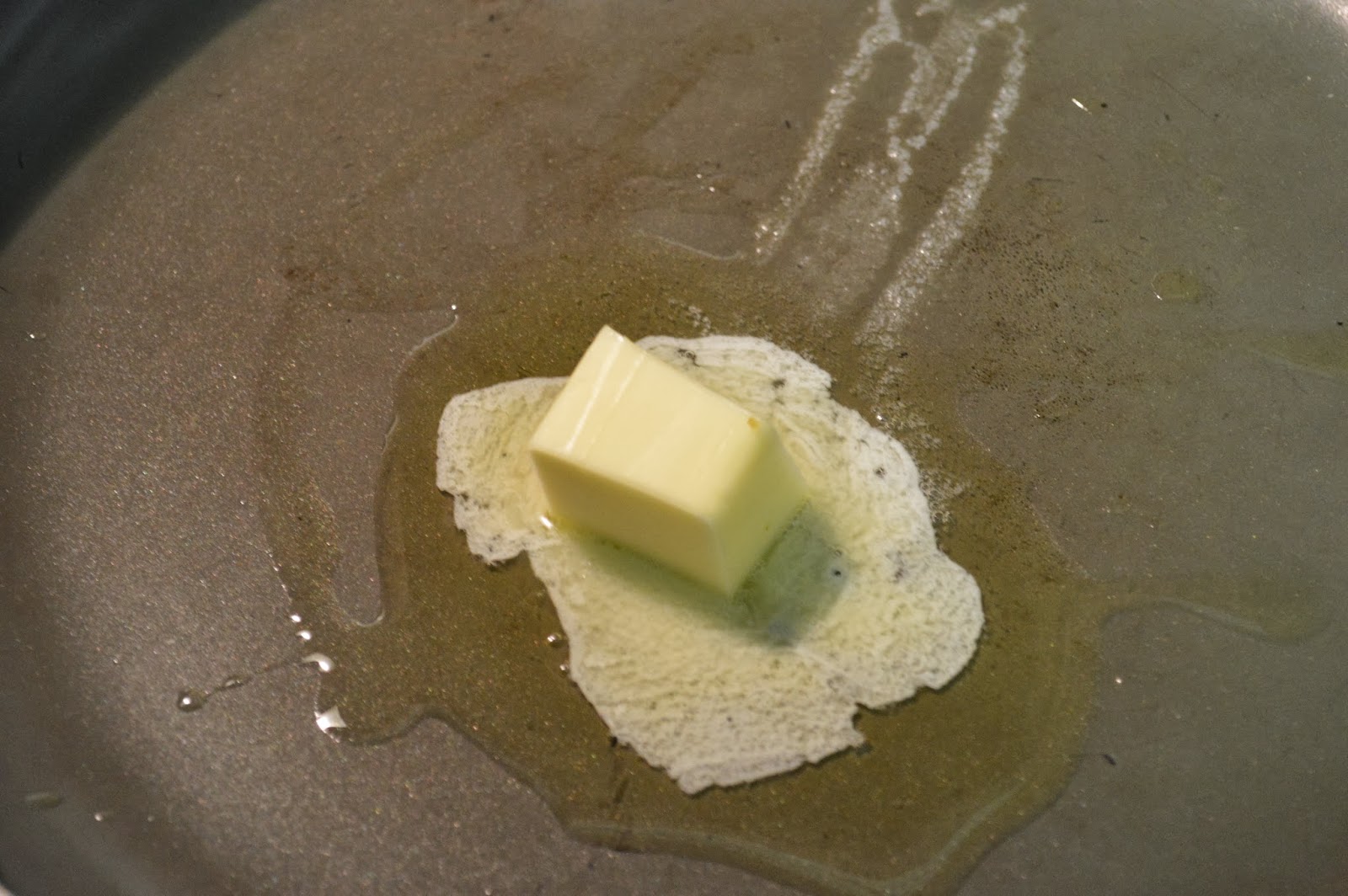 Toss in the chopped leeks, and some salt and pepper.

Add a wineglass full of white wine and another glass not quite as full of water.  Come on, you've gotta love a recipe that measures in wineglasses!

Loosely cover the pan and simmer for 5 minutes or so.

In that 5 minutes, chop some boneless chicken breasts...I usually do 4 for my family...into "finger-sized" pieces.  One of the other nice things about this recipe is that if you (whoops) forgot to thaw chicken, semi-frozen meat works just as well...as long as you don't hurt yourself cutting it! 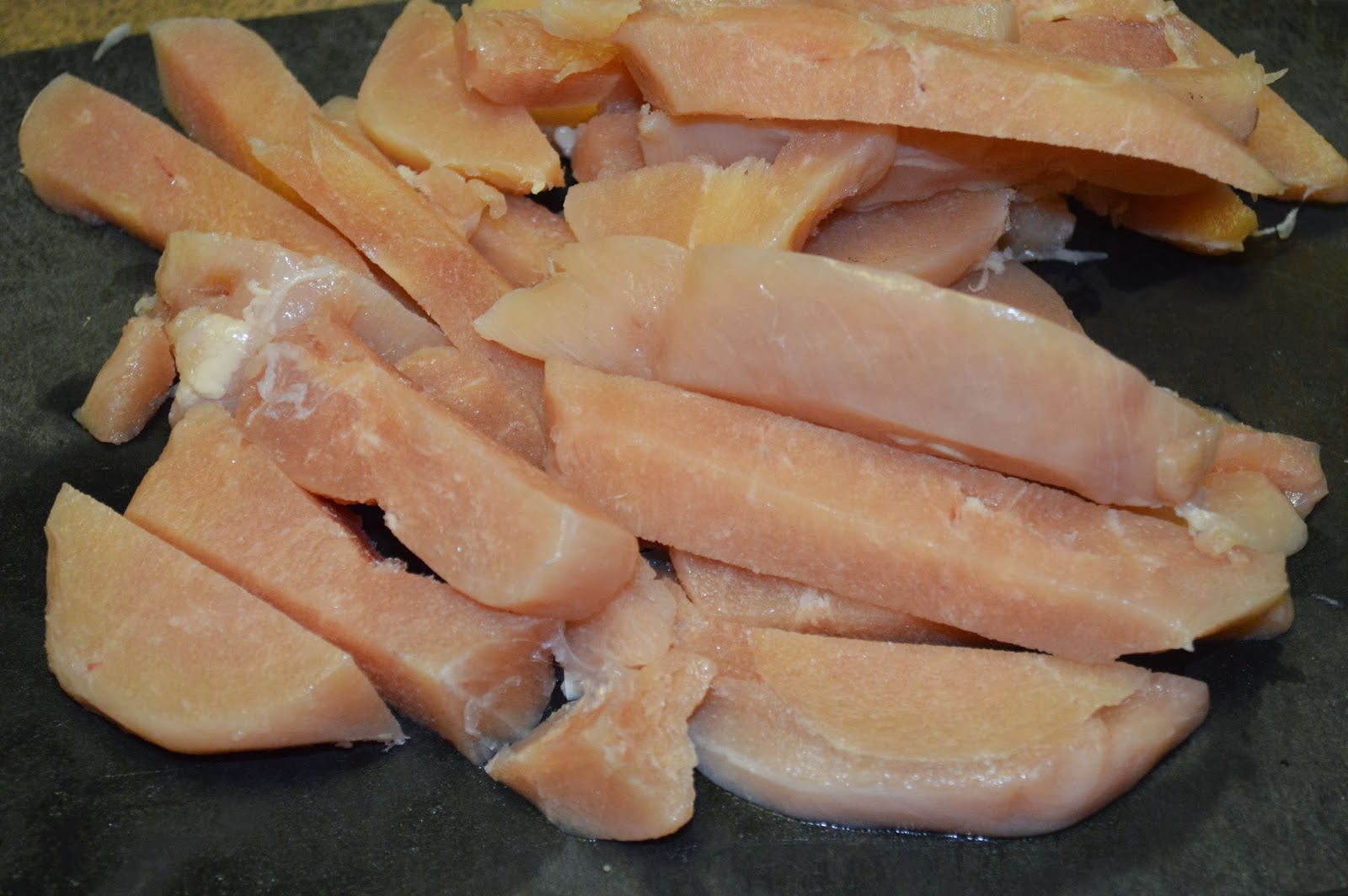 Then, slice up some mushrooms.  I used about a half pound.  You can use a knife or one of those egg slicer doohickeys.  Or, you can just buy them presliced.  But I barely tolerate mushrooms as it is, so I will say that I prefer the texture if they are freshly sliced.  Takes you all of a minute or two.  then roughly chop a handful of parsley, stems and all. 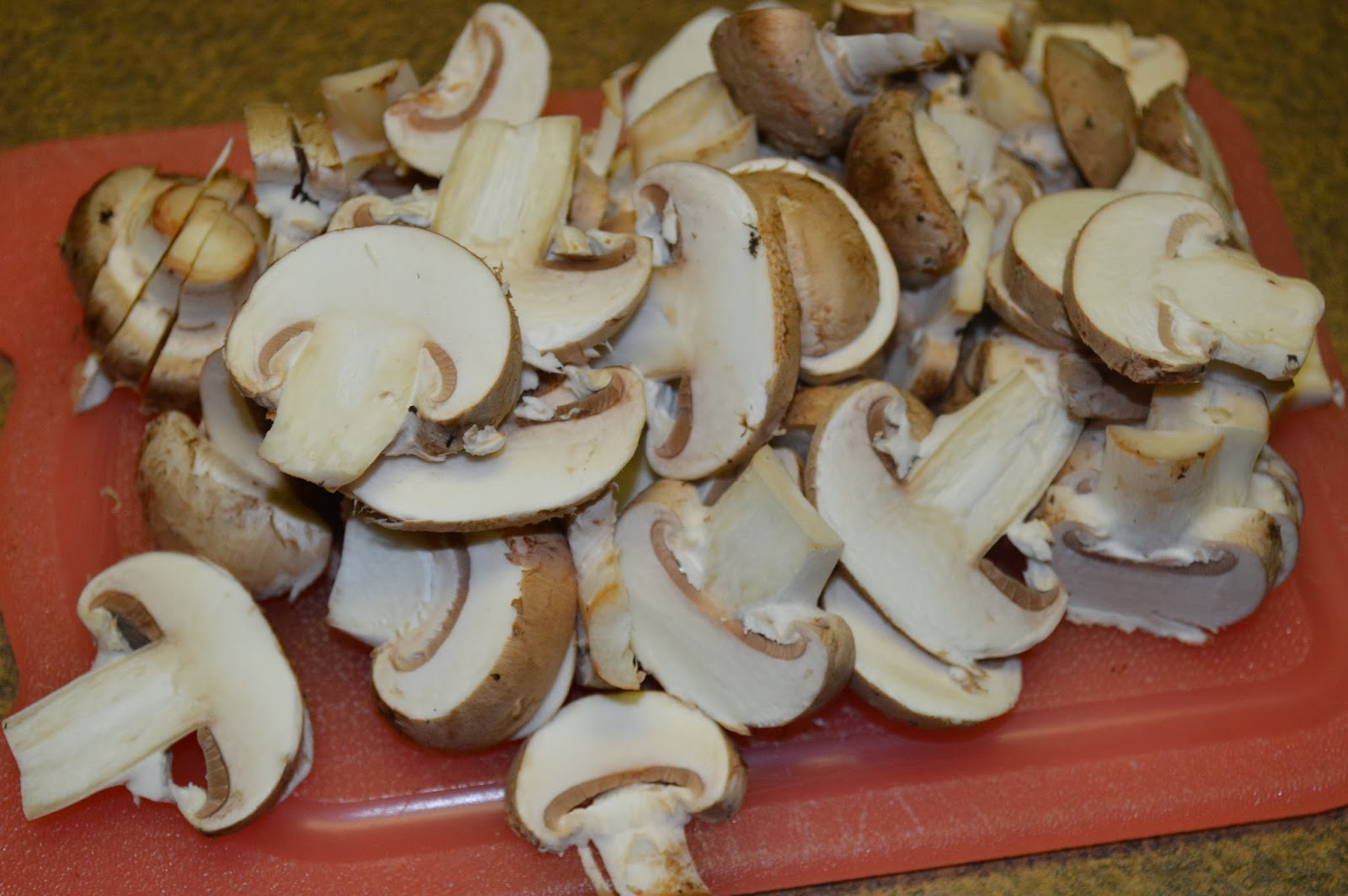 By now, your leeks have probably done their time, so toss in all that you've chopped except for a small bit of the parsley, and also pour in a generous amount of cream.  At least a cup, cup and a half.  Don't be scared.  It's comfort food, plus there's enough "healthy" in there to even out the balance of the decadent richness of the cream. 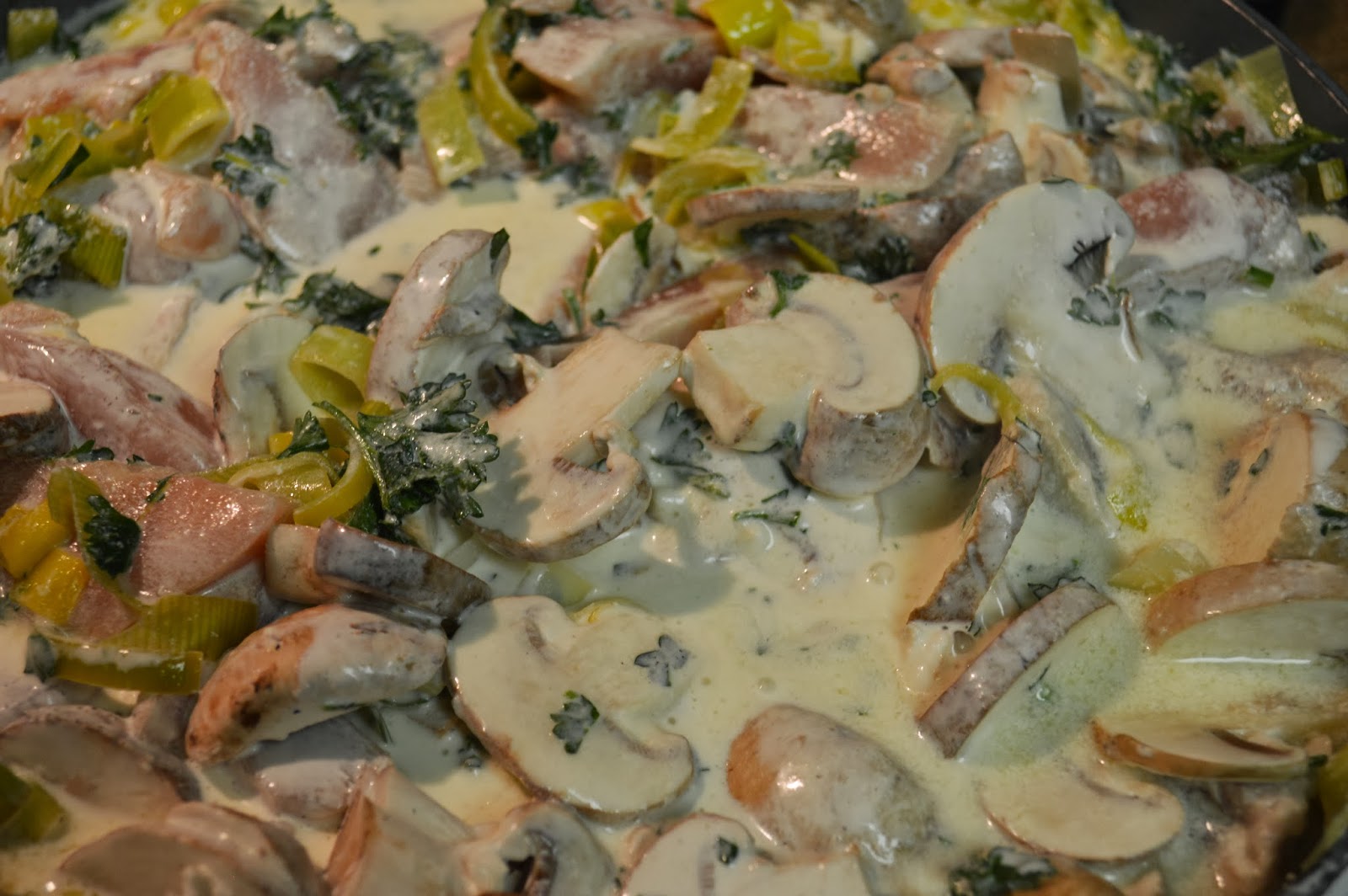 Bring that all to a boil and then simmer it for 10 minutes.

Squeeze in half a lemon and give it a stir. 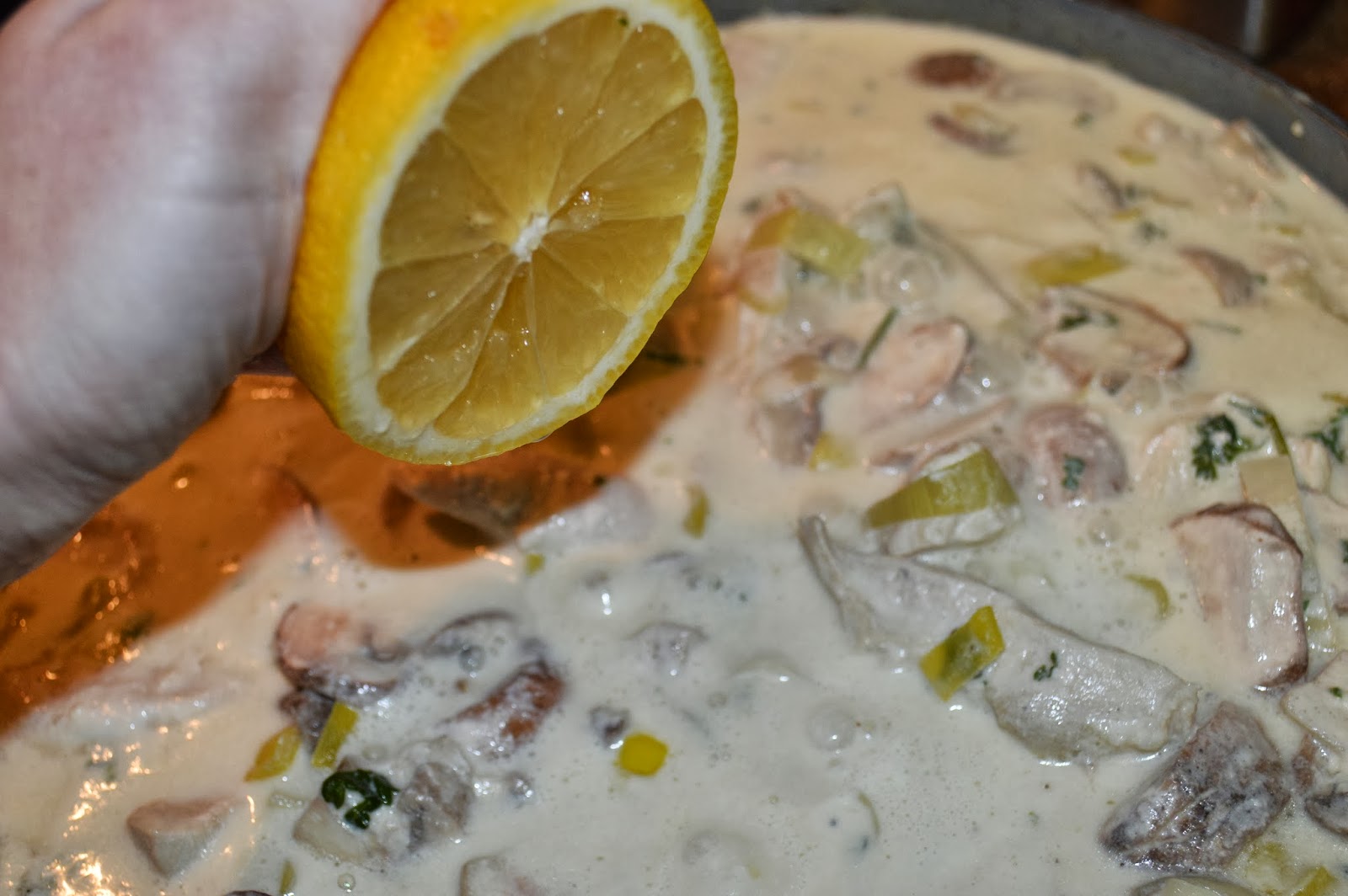 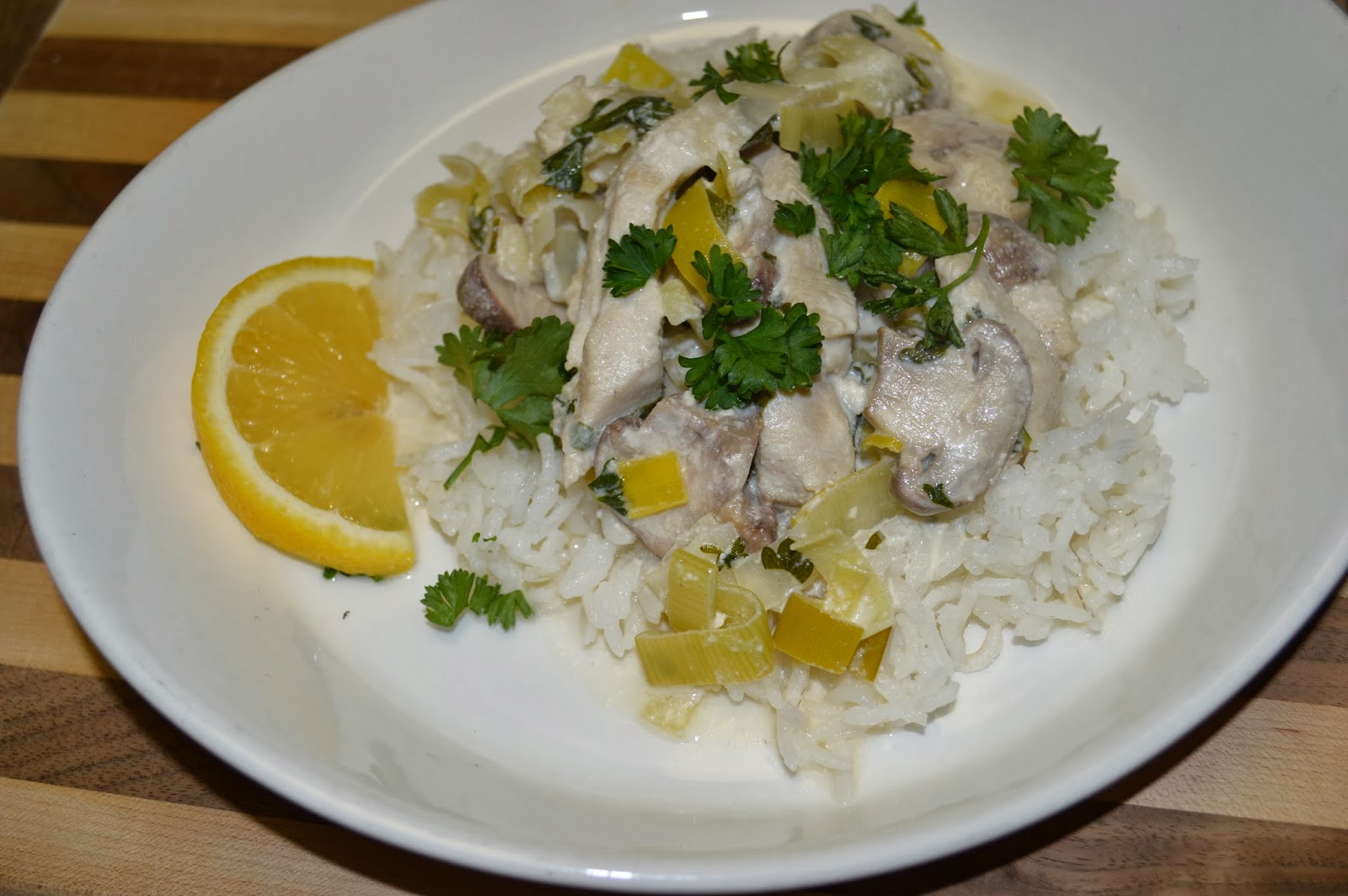 It's great leftover too, or made without the mushrooms, or without parsley (if you're like me and hardly ever have it on hand outside of garden season).  This would be a contender for my last meal.  Cooked by Jamie himself, of course.  Wink wink.  Accompanied by Curtis Stone cooking dessert.  Awwww yeah...