If you've ever planted a zucchini plant, you're probably familiar with how overwhelming they can be once they start producing.  There's even a "Leave a Zucchini on Your Neighbor's Porch" day.  I try to shred and freeze as much as I can to keep up with it, and that means that I have a frozen stash of zucchini on hand for most of the rest of the year until the next garden zucchini-fest comes around.

I'm always on the lookout for ways to use that zucchini, and this Gingered Carrot Zucchini bread recipe is one of my go-to's for several reasons.  One: it is delicious.  Two: it is easy.  Three: the recipe makes 2 loaves at once, so I can either give one away or freeze it for later.  Four: it's a nice way to show kids that vegetables aren't scary.  I mean, this bread has not one, but TWO vegetables in it, and it's fantastic!

The original recipe is from Sur La Table's cookbook Eating Local, which has some really good seasonal recipes.  Many of which I may never get to, because my copy is permanently stuck creased at this recipe because I use it so much during zucchinipalooza.  I, as usual, am much less precise and fussy in my preparation of it than the recipe would seem.

First, grab a carrot or two.  Peel and shred on a larger grate.  You'll need about a cup total.  The original recipe doesn't say if that's loose or packed, so I always go ahead and estimate it, probably towards the packed side.  Then do the same with a zucchini, only don't peel it, because the green flecks look pretty in the bread.  Unless you're hiding it from people who are extremely suspicious of zucchini, in which case, peel away.  You'll need around a cup of that as well.  If you have zucchini frozen, thaw out about a cup of it.  I like to drain it, if it's watery, so I actually thaw 2 of my 1-cup bags, and the drained zucchinimush comes out to around a cup, packed down. 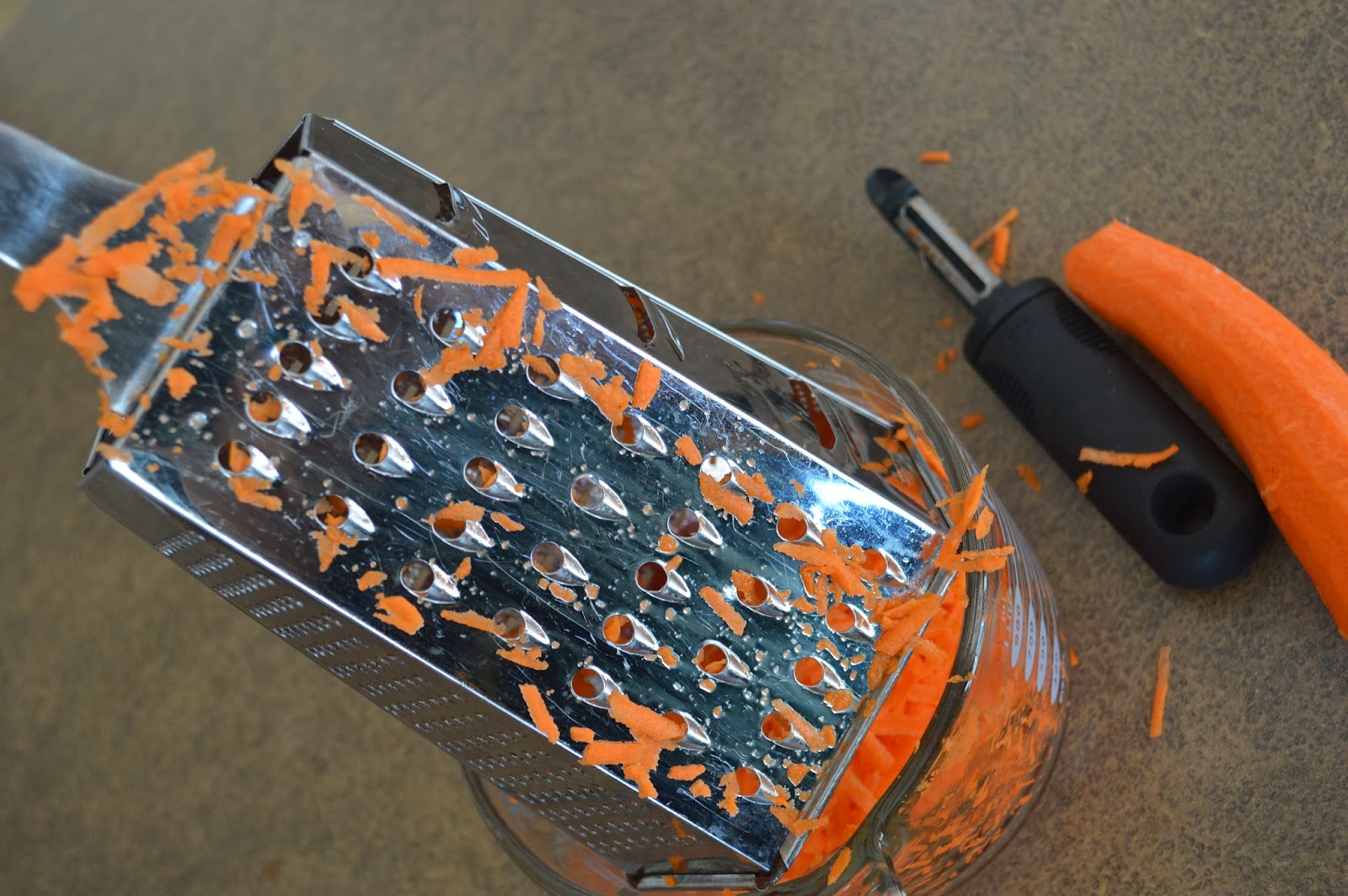 You'll also need candied ginger, chopped small.  You can find it bagged, or sometimes in the bulk section of some grocery stores.  It's easy enough to make your own, but if you do, you want to do that a day ahead or so.  Candied ginger is sharp and sweet.  Really delicious, but you don't want to have a large chunk of it in your bread, just small nips throughout.  It's also a pain to chop.  Sticky and gooey, knife-clinging blobbiness.  I sometimes add a bit of sugar on the cutting board just to make it easier to deal with.  You need about 1/2 cup of the chopped ginger. 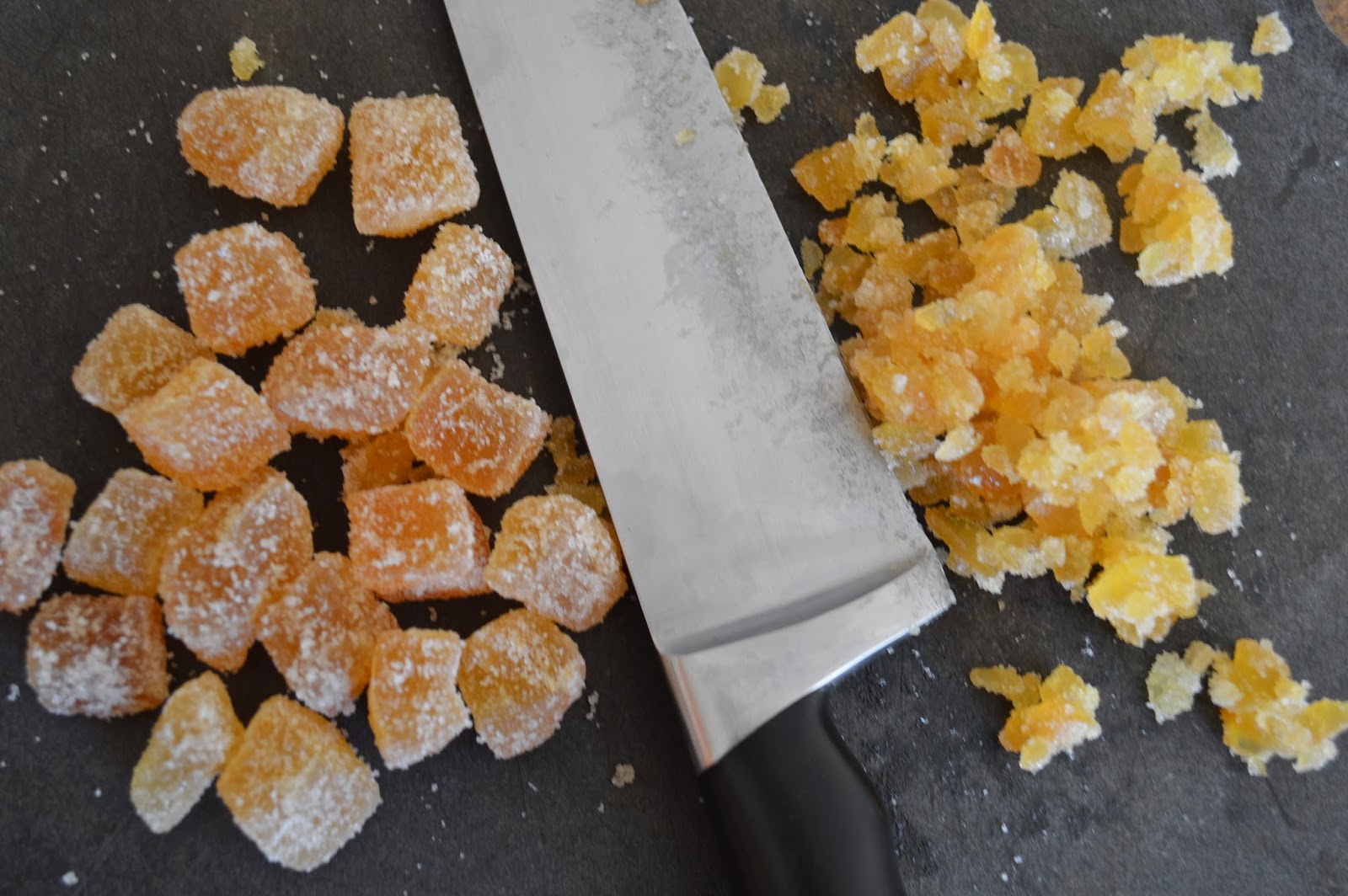 Preheat your over to 325, and grease 2 regular sized loaf pans.  Try to have them as identical as possible, because if you have one dark and one light pan, they will cook at different rates and complicate things.  No one needs more complicating.  You can grease them with whatever you have on hand, but I like the coconut oil spray that I find at Trader Joe's.

In a medium bowl, mix together 3 cups flour, 2 teaspoons ground ginger, 2 teaspoons ground cinnamon, 1 teaspoon baking soda, 1/4 teaspoon baking powder, and 1 teaspoon kosher salt.  Give it all a stir together with the teaspoon you measured with, in the interest of not complicating things.  Add in the candied ginger and give it another quick stir, so that the stickiness of the ginger is wrapped up with the dryness of the flour mixture.  Set that bowl aside.

In a large bowl, give 3 eggs a quick whisk.  Add in a cup of oil, whatever cooking oil you like or have on hand, although I wouldn't suggest olive oil at all.  The original recipe calls for canola oil, which I'm a bit suspicious of, so I like to use coconut oil.  With the oil, add in 1 3/4 cups of sugar and a large splash of vanilla extract.  Whisk that all together. 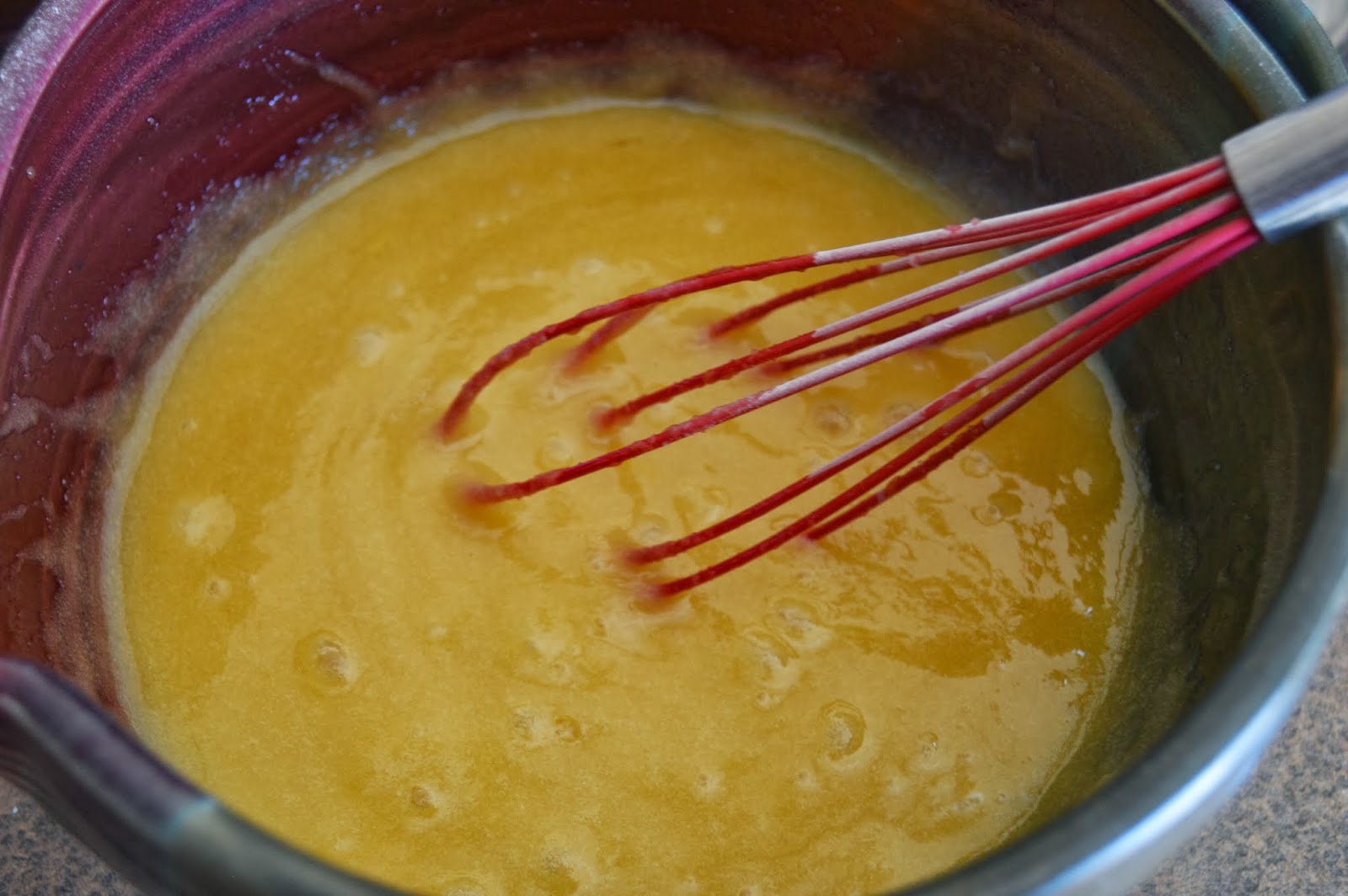 Add the carrot and zucchini to the wet mix and give it a mix. 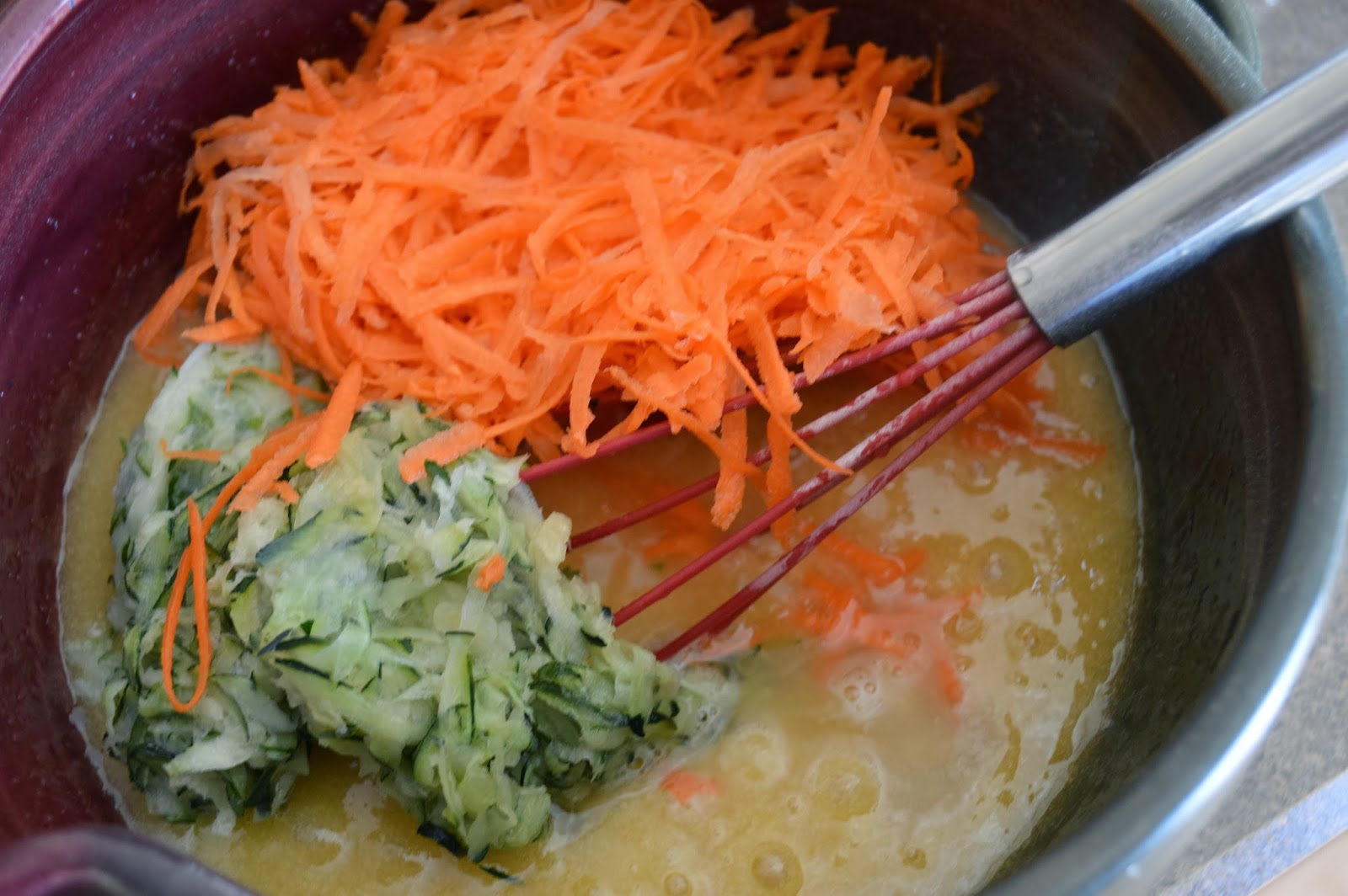 Pour the dry mixture into the wet mixture and stir it with a wooden spoon until it  is just combined and you don't see any more dryness. 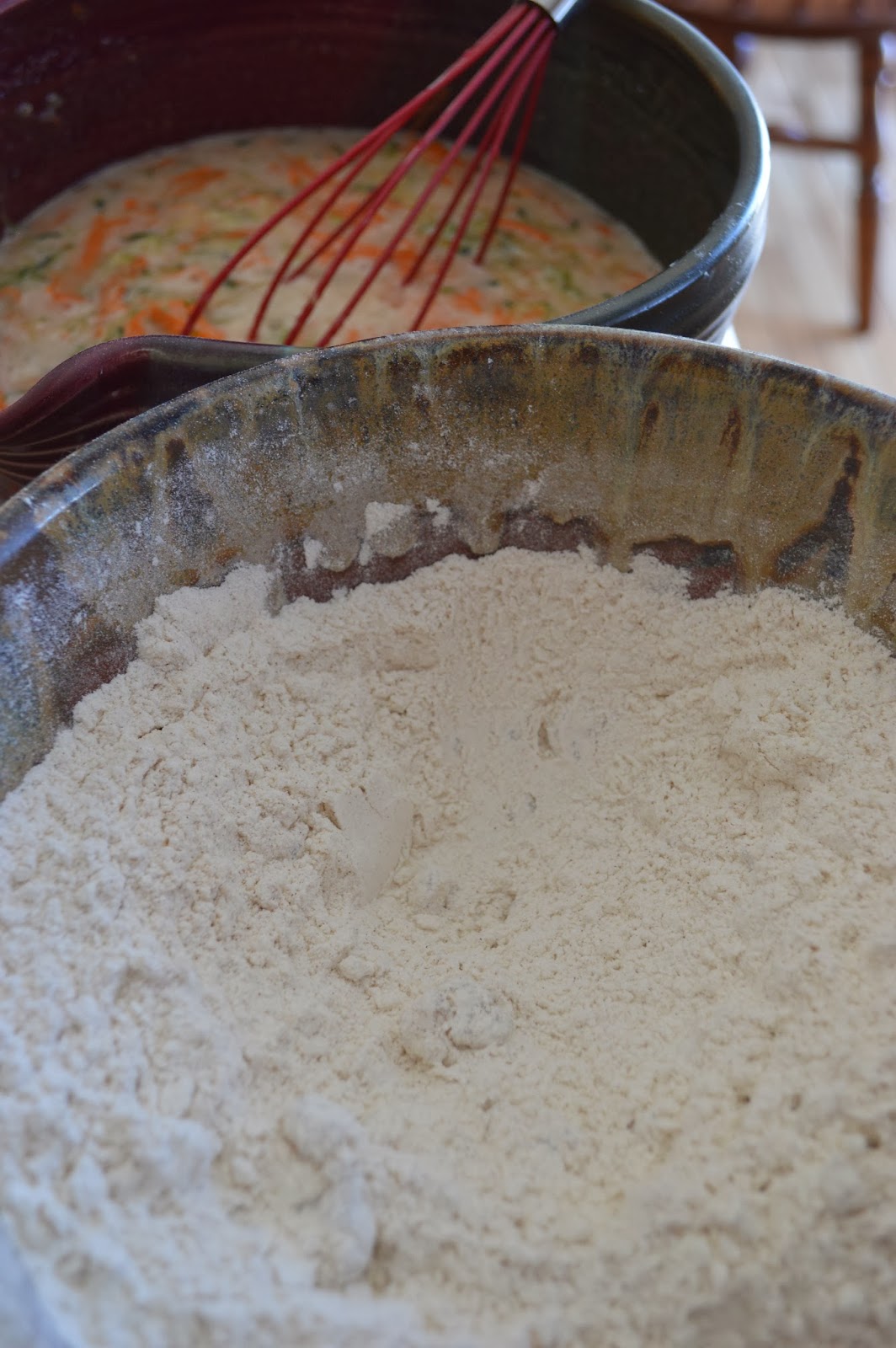 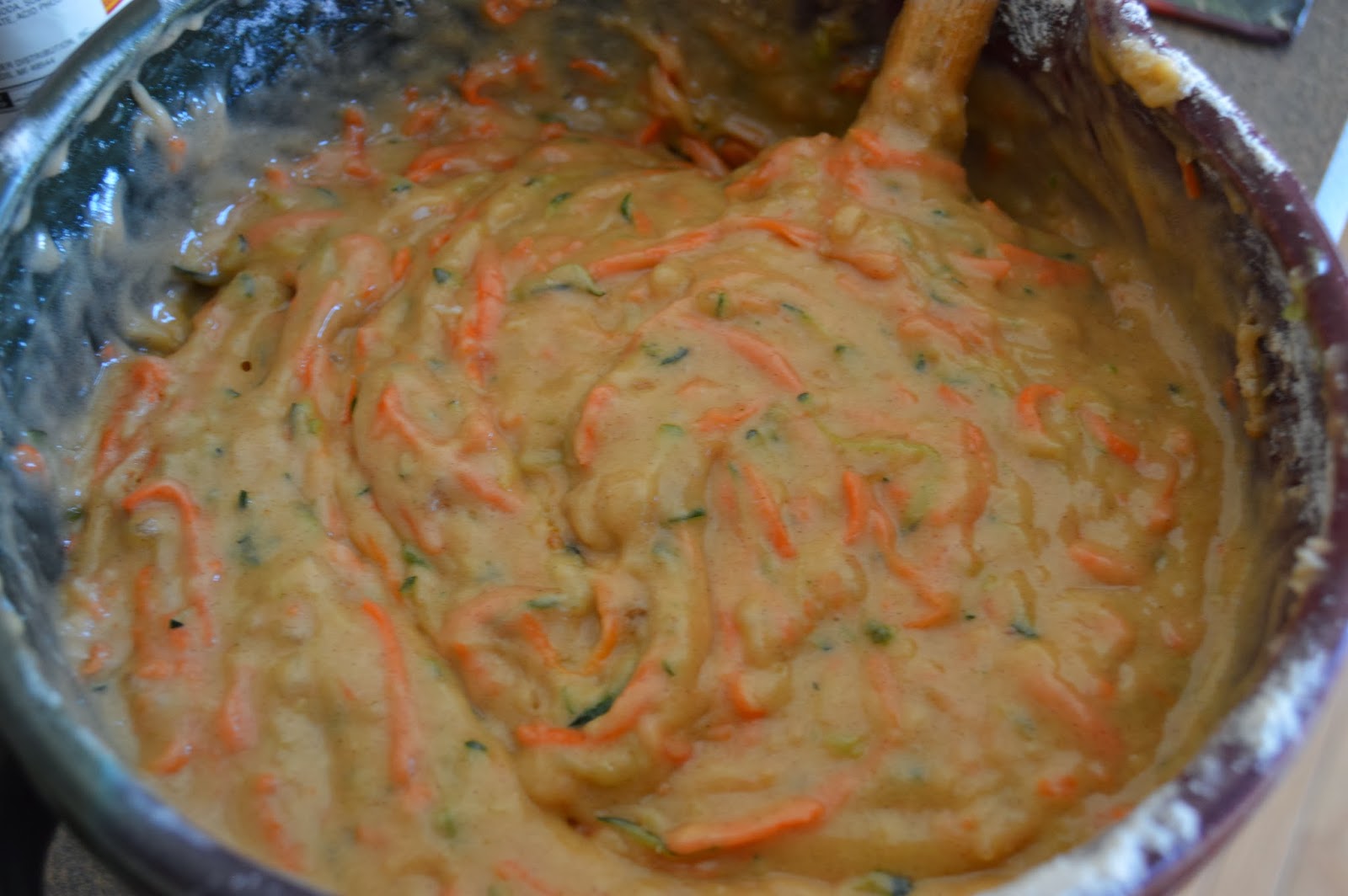 Divide the batter into your pans evenly. 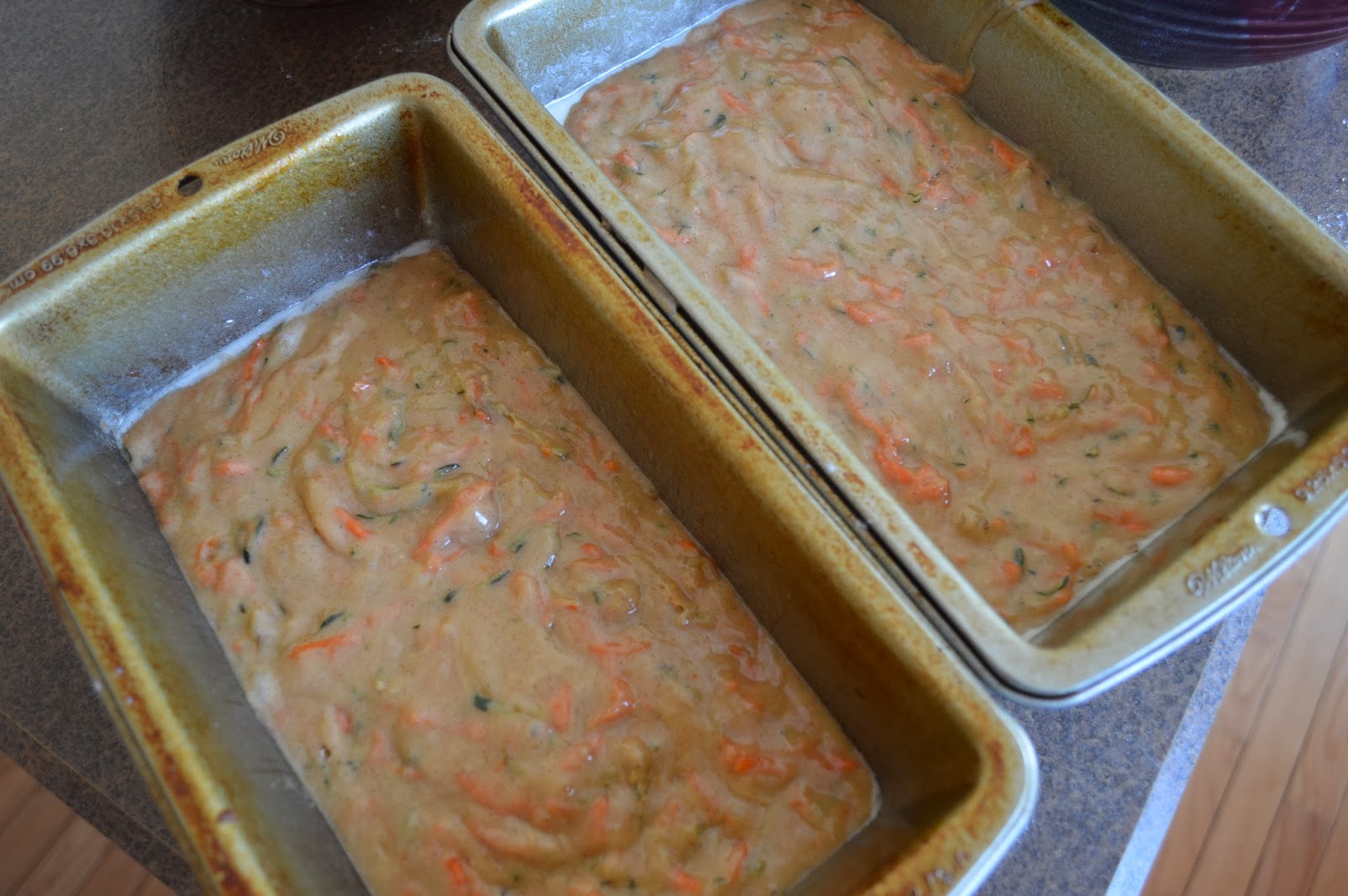 Pop them into the oven and bake for an hour, until a toothpick in the center comes out clean.  I've never tried it, but I'm guessing that this batter could make some awesome muffins too.  Or even mini muffins.  Just adjust your pan and baking time. 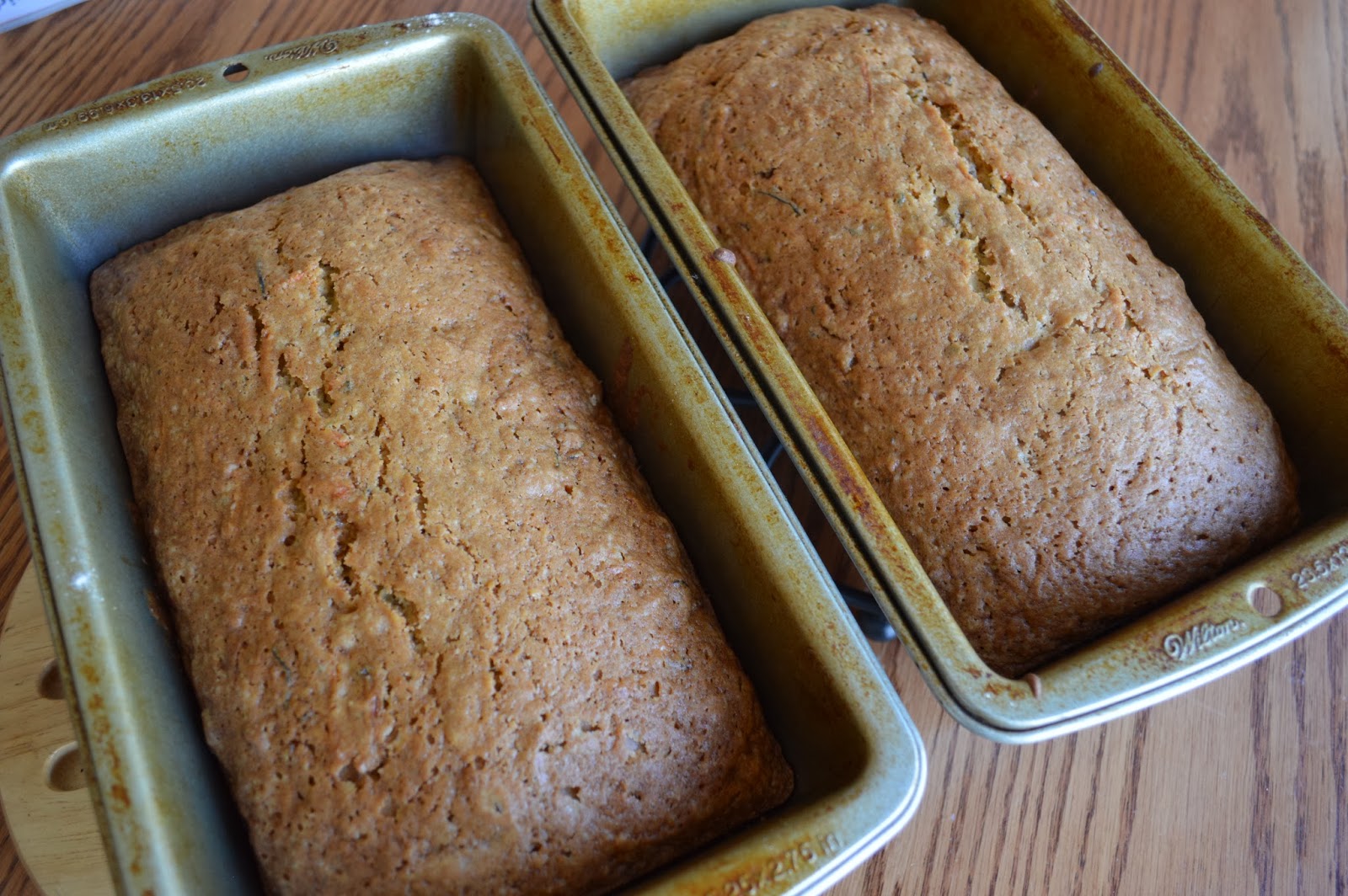 Let them cool for 10 minutes in the pans, then pop the bread out and let them finish cooling. 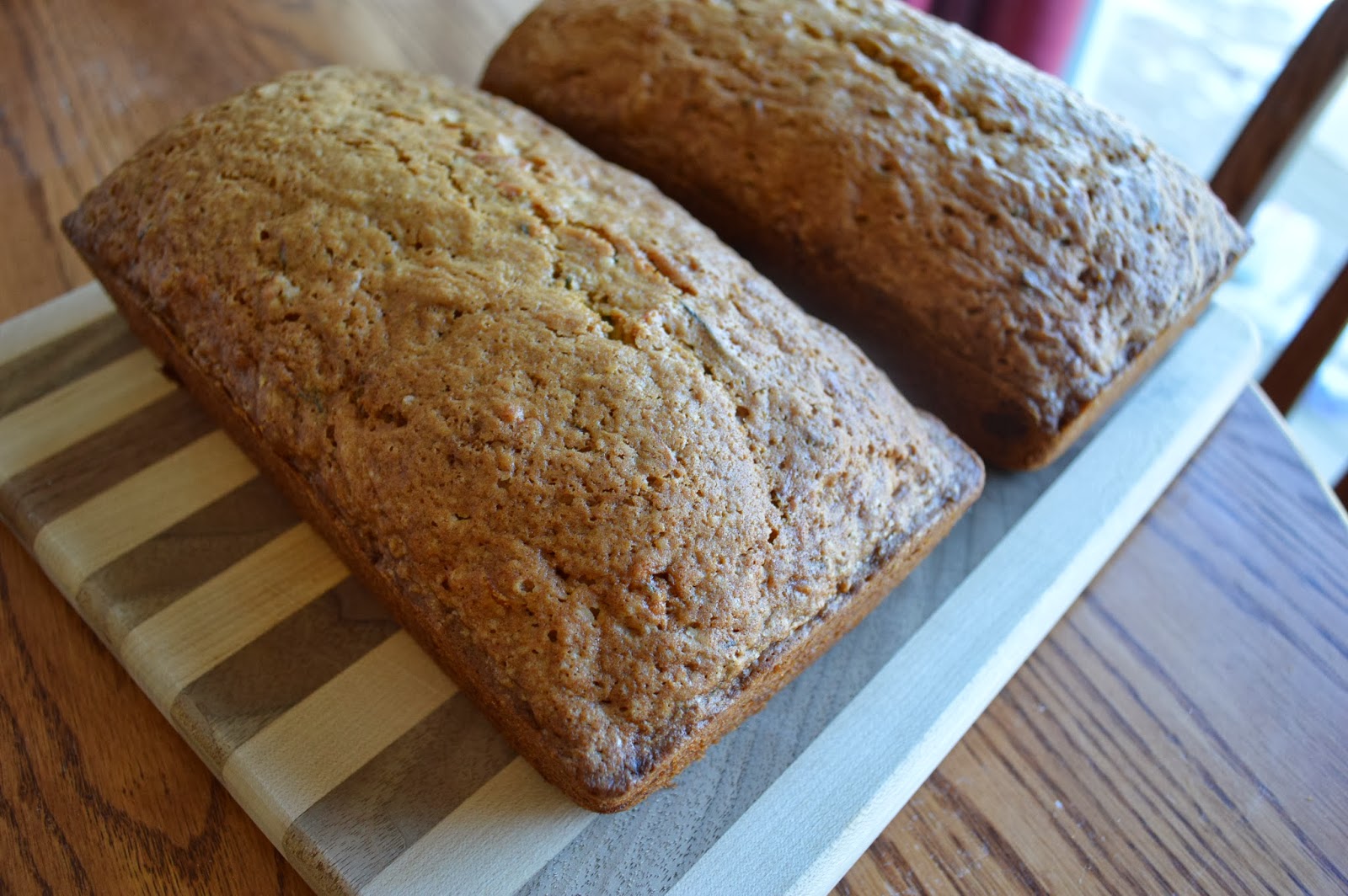 Or, slice them while they are still a little warm, because this bread is just perfect with some butter or cream cheese gone all melty on it. 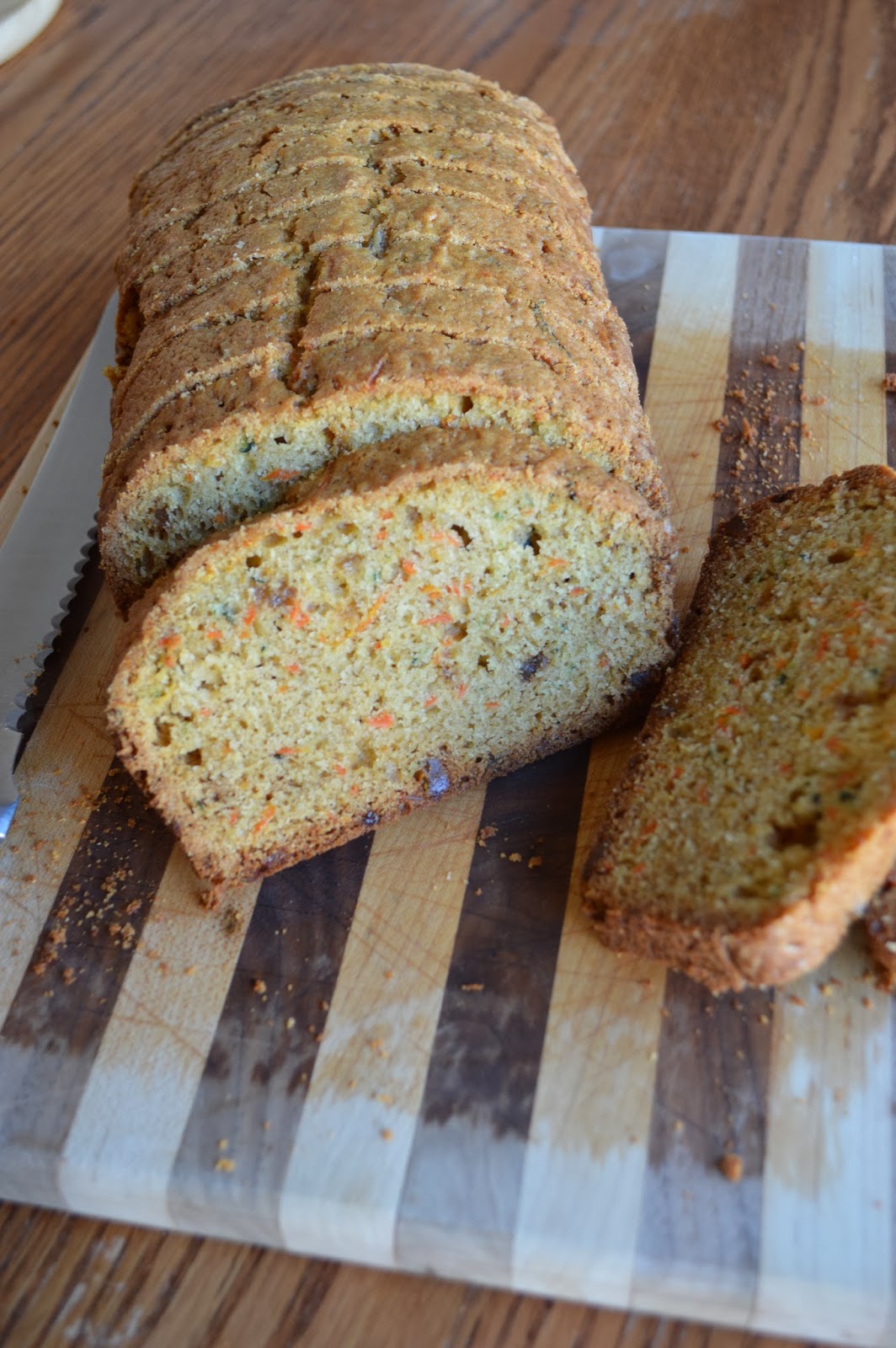 Come on kids!  Eat your breggies!

Don't forget, if you're on Facebook and want to keep up with From Scratch there, you can find it at https://www.facebook.com/mylifeandfamilyfromscratch!  Give us a "like", so you don't miss anything!
Posted by Krasimom at 10:01 AM