Let's face it, even the name rhymes with "party claw".  Forget that it's just "Fat Tuesday" in French...you have no choice but to celebrate on a day named Mardi Gras.

My father-in-law's family is from Louisiana, so our ties to this celebration run to the core.  Ask any of my kids.  The family's favorite dinner?  Gumbo, hands down.  Party beads have been a regular part of the dress-up bins since before the girls were walking.  We may even bleed green, purple, and gold.  But, the Mardi Gras culinary tradition that has our heart in it's sweet, sweet grip is that of the king cake.

King cake has many different forms, and is found in many different countries.  When I was younger, I loved reading a book about a French orphan girl, and was enthralled with her description of finding the bean in her "galette des rois", and getting to wear a paper crown and call the shots all day.  In Mardi Gras terms, it's the last indulgence before Lent comes and spoils the fun by reminding us of sacrifice and restraint.

There are a million recipes out there for king cake, and I don't know if there's a right or wrong way.  No, I take that back...there are always wrong ways to do something.  Check out this entry on Cake Wrecks, if you don't think so.  But, to me, there are a few things I look for in a king cake.  The cake has to be not-too-sweet.  It's more of a bread than a cake.  And the filling should be the sweetness, just at that edge of being almost too sweet, but not too sweet because the bread-cake balances it out.

A word of warning: true king cake is not for idiots.  There is a plastic baby in the cake.  An inedible plastic baby that someone could choke on.  Because of today's sue-heavy trends, some bakeries simply place the baby under the cake.  Which is way less fun, plus, idiots could still find a way to choke on it.  I throw caution to the wind and cook the baby into the filling.  Shockingly, no one has ever choked on it.  Part of that may be because everyone is on a mission to find the tiny thing so that they can wear the big beads and be king for the night...which basically means wearing the big beads.  Whatever.  They're happy with it.

You can find the plastic babies at the party store, usually in the baby shower favor area.  Plastic babies are probably not chemical free to bake in cake, but for once a year, I'll take the risk.

Also unusual for me, King cake is not a "toss together" kind of recipe.  It takes preparation and steps, and time.  But I promise you, it's worth it.  The recipe I use is from Food Network, and you can find the original here.  It falls under the "not really hard, but time-consuming" category of recipes.

So, let's get started!  Unless you're a night person, you want to start this in at least the afternoon, because with rise times, you're looking at at least 4 and a half hours of various rise times before you can stick it in a fridge overnight.  The first thing you need to do is make your dough.  Heat 1/3 cup of milk in a saucepan to scald it...you want to get it hot, but not make it boil.  Put it in a food processor, and add 2 1/4 teaspoons of active dry yeast.  Pulse it a few times to combine.  Add 1/2 cup of flour and 2 egg yolks, and process it until it's mixed.  Then sprinkle another 2 cups of flour over the top evenly, and do NOT mix it in.  Put the lid on, and let it sit for an hour and a half.

After the 90 minutes, add in 2 eggs, 3 tablespoons of sugar, the zest of a lemon, a pinch of salt and some freshly grated nutmeg.  Process it for one minute, and it should make a sticky dough.  Butter up a bowl and set the dough in the buttered bowl, then cover it tightly with plastic wrap.  Let it rise in a warm spot for 3 hours.

Give the dough a quick kneading on a clean surface, then form it into a ball and put it back into the buttered bowl.  (I really like saying "buttered bowl"...it makes me giggle every time!)  Cover it tightly again and put it in the fridge for 8 hours, or overnight. Now, time to make the filling!  Take a half cup of raisins...the recipe calls for golden raisins, but I've used regular raisins with results that were equally delicious...and put them in a medium saucepan with a quarter cup of bourbon.  Swig some yourself, for a quality check.  "Plump" the raisins over medium heat, which basically means boil the raisins in the bourbon until they bloat up in boozy deliciousness.  Warning here: don't crank the heat too high, or else your alcohol fumes will catch fire and you will have at best a flambe, and at worst a kitchen disaster. 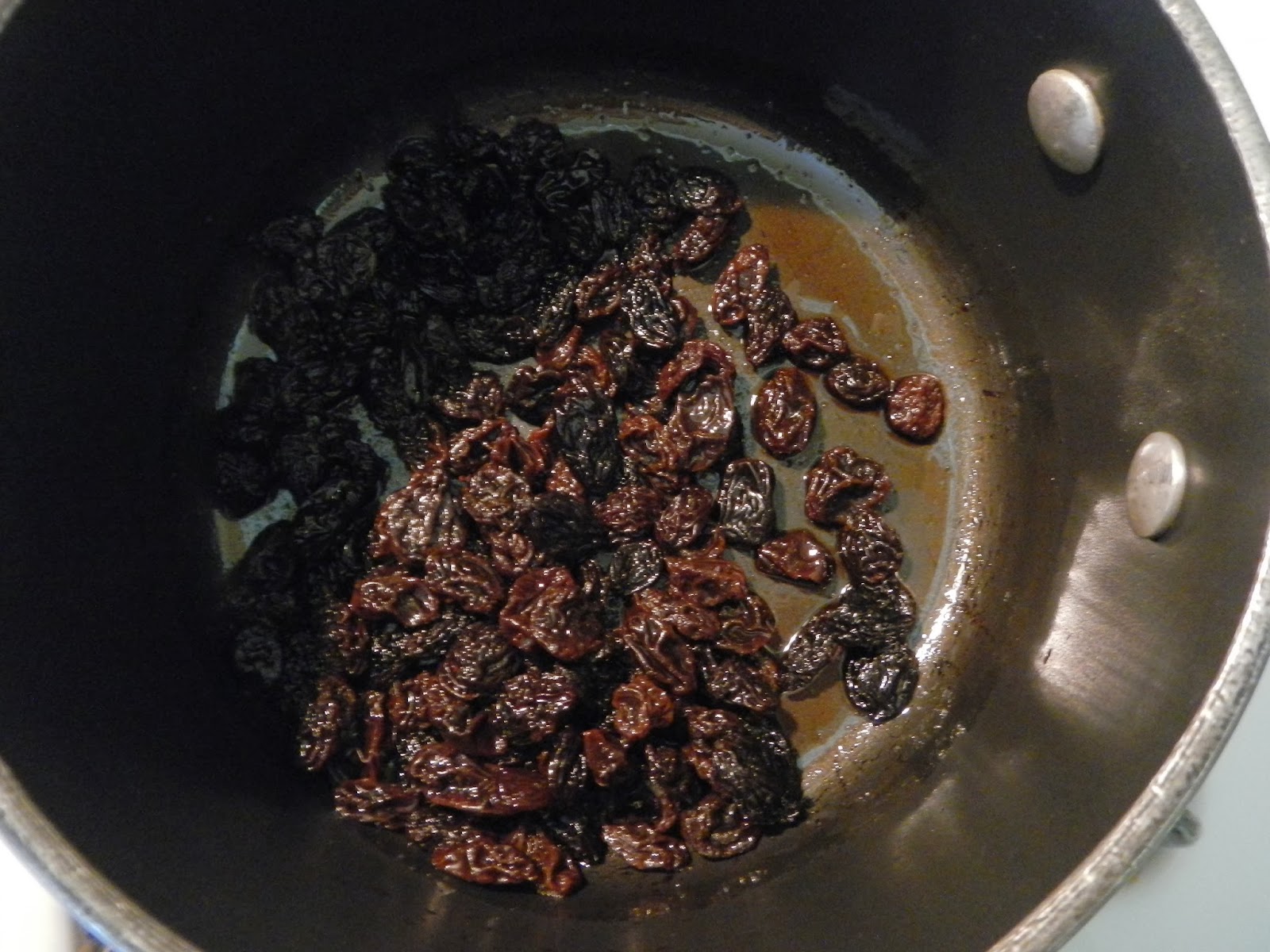 While that's going, toast up 2/3 cup of pecans by heating them in a pan until they smell nutty and start to lightly brown.  Take them off the heat and chop them. 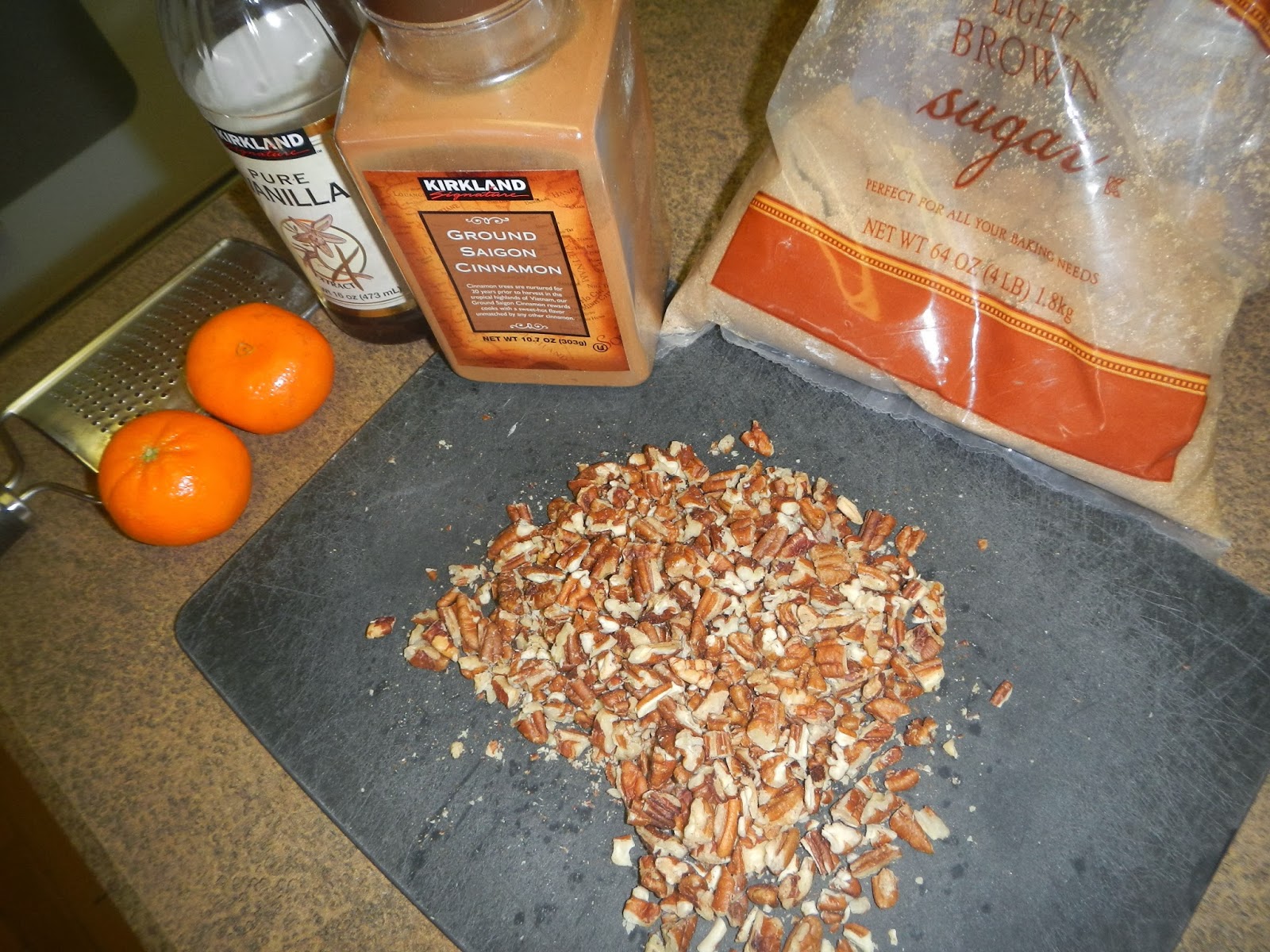 Take the pan off the heat and add 3/4 cups of brown sugar, the pecans, a teaspoon each of vanilla and ground cinnamon, the zest of an orange (I used a couple of clementines, because that's what I had on hand), a good pinch of salt, and the potentially life-threatening plastic baby.  Mix it all up and set it aside. 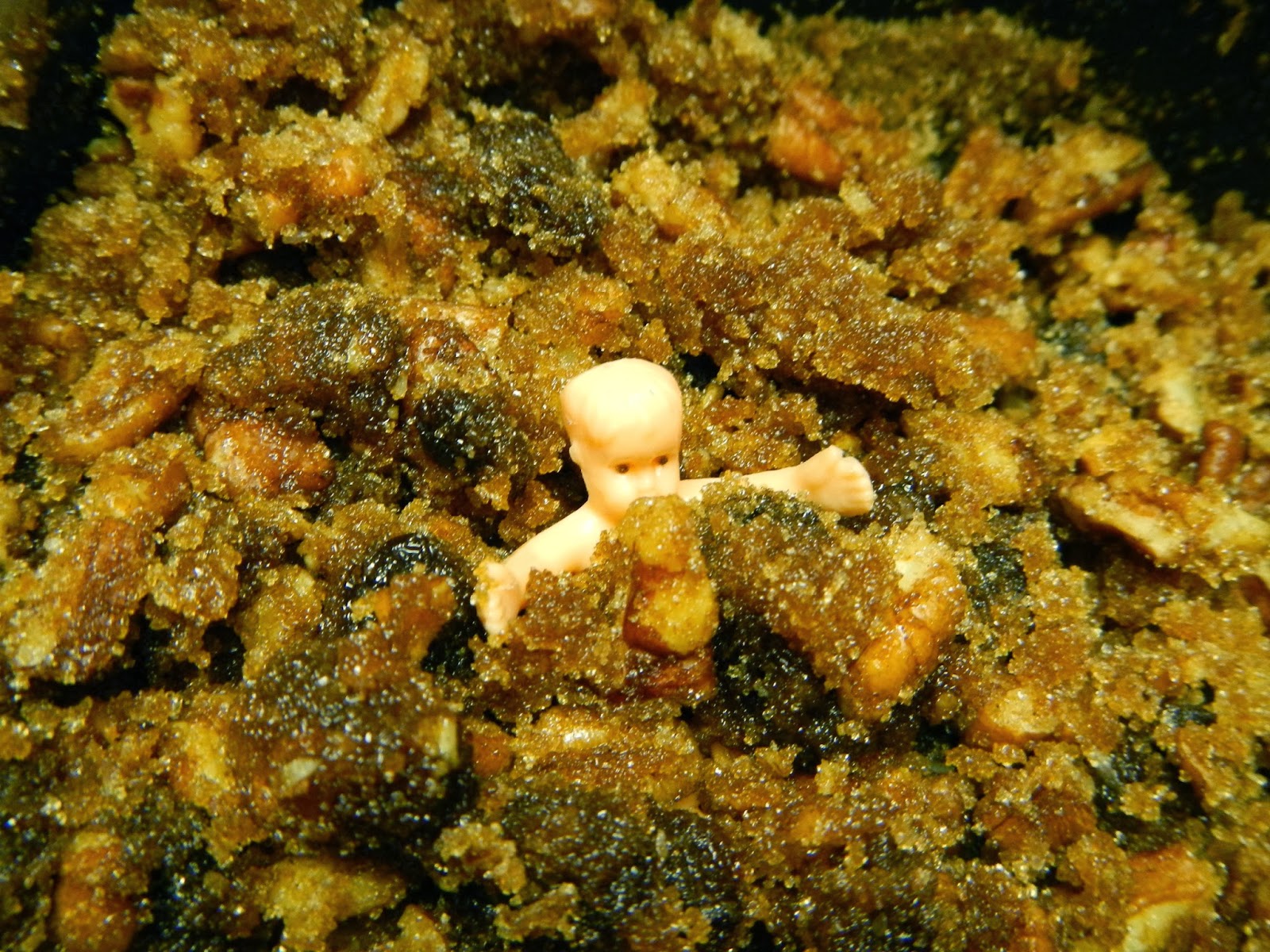 Take out the dough.  On a floured surface, roll it out to a big rectangle...about 7 inches by 20 inches.  It's a thick, tough dough, so use a little muscle. 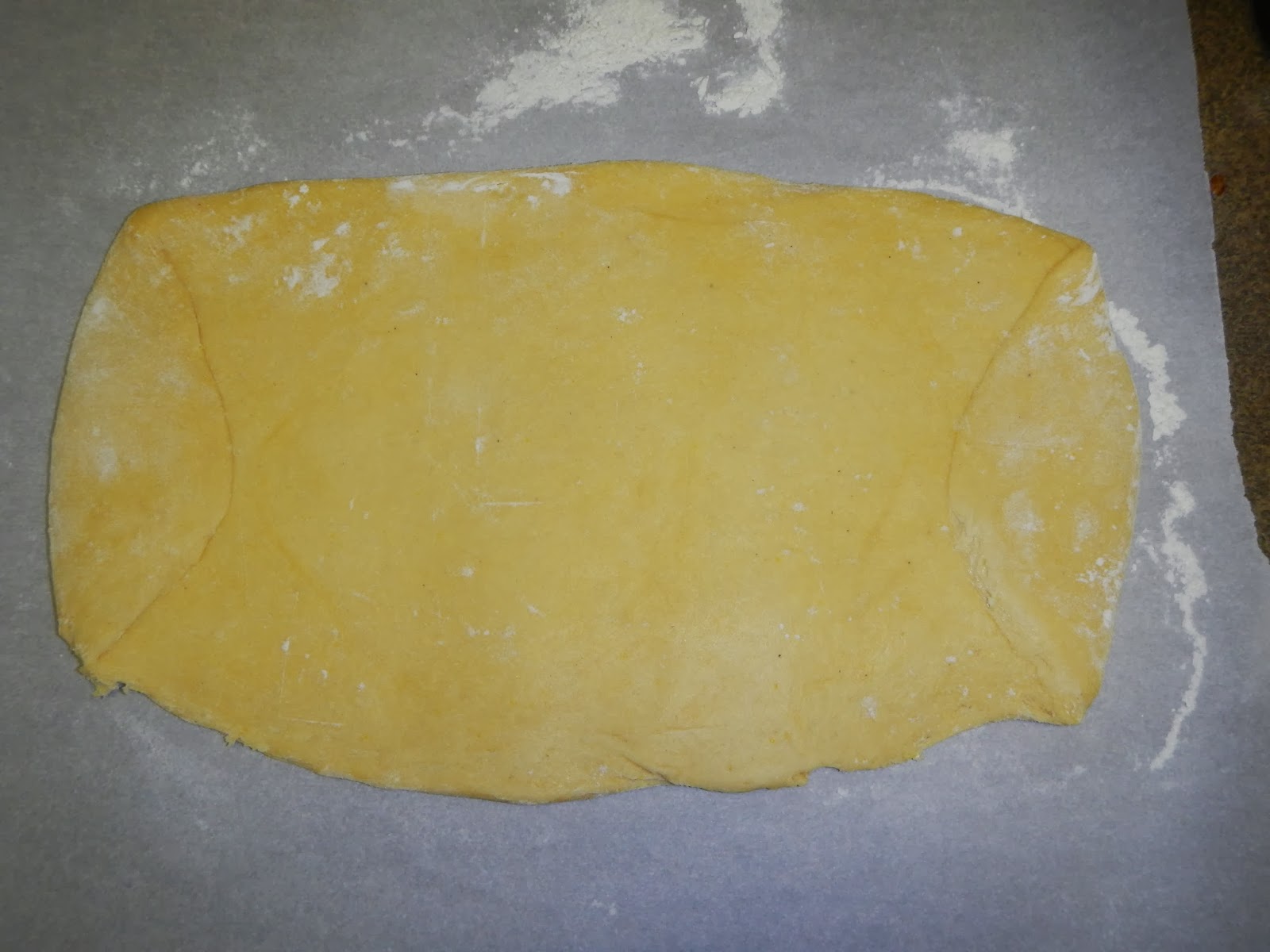 Spoon the filling in an even layer across the dough, leaving an inch margin at the top and bottom.  Fold the bottom up, and then fold the top down to cover the filling.  Pinch it to seal it. 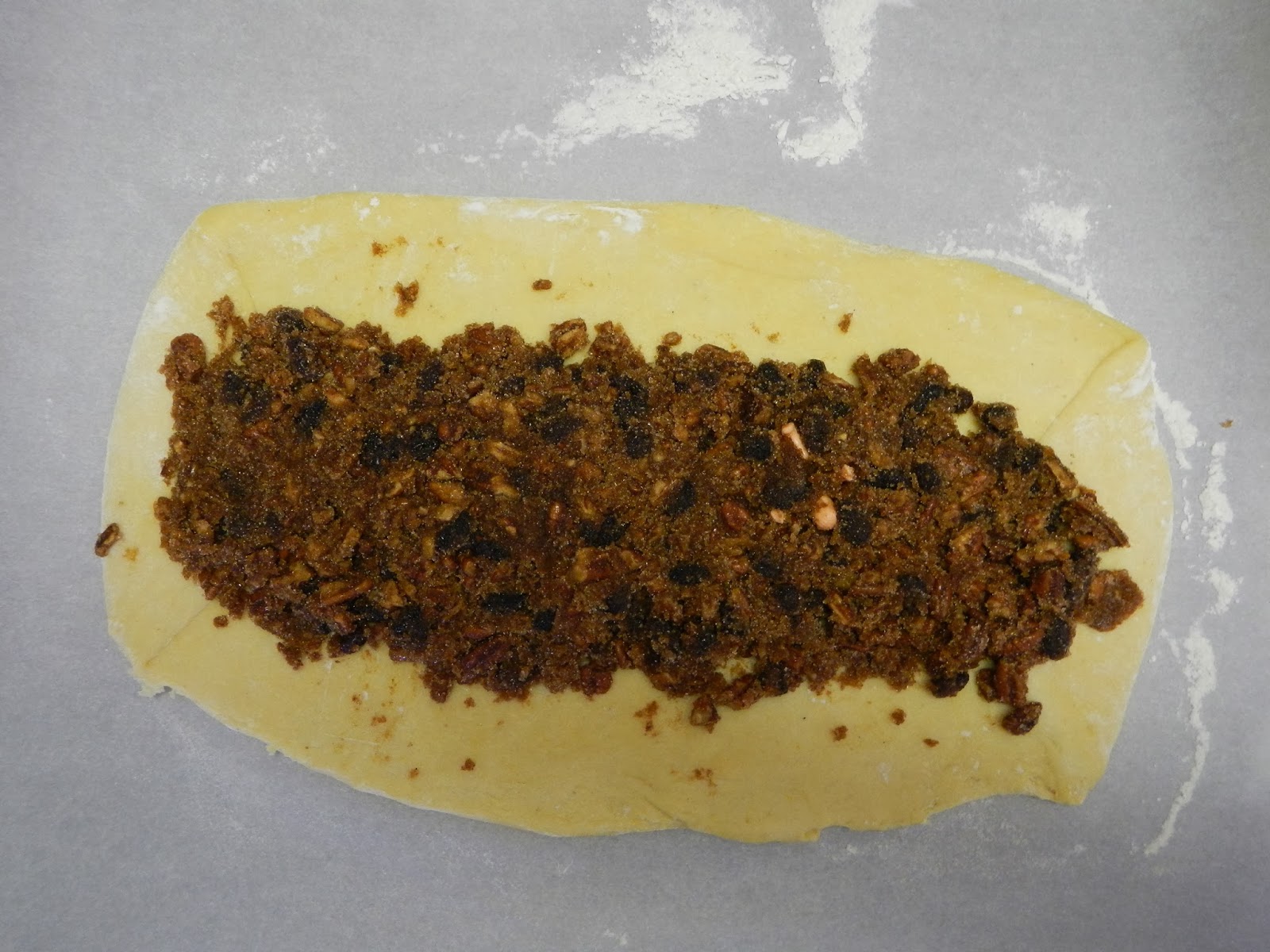 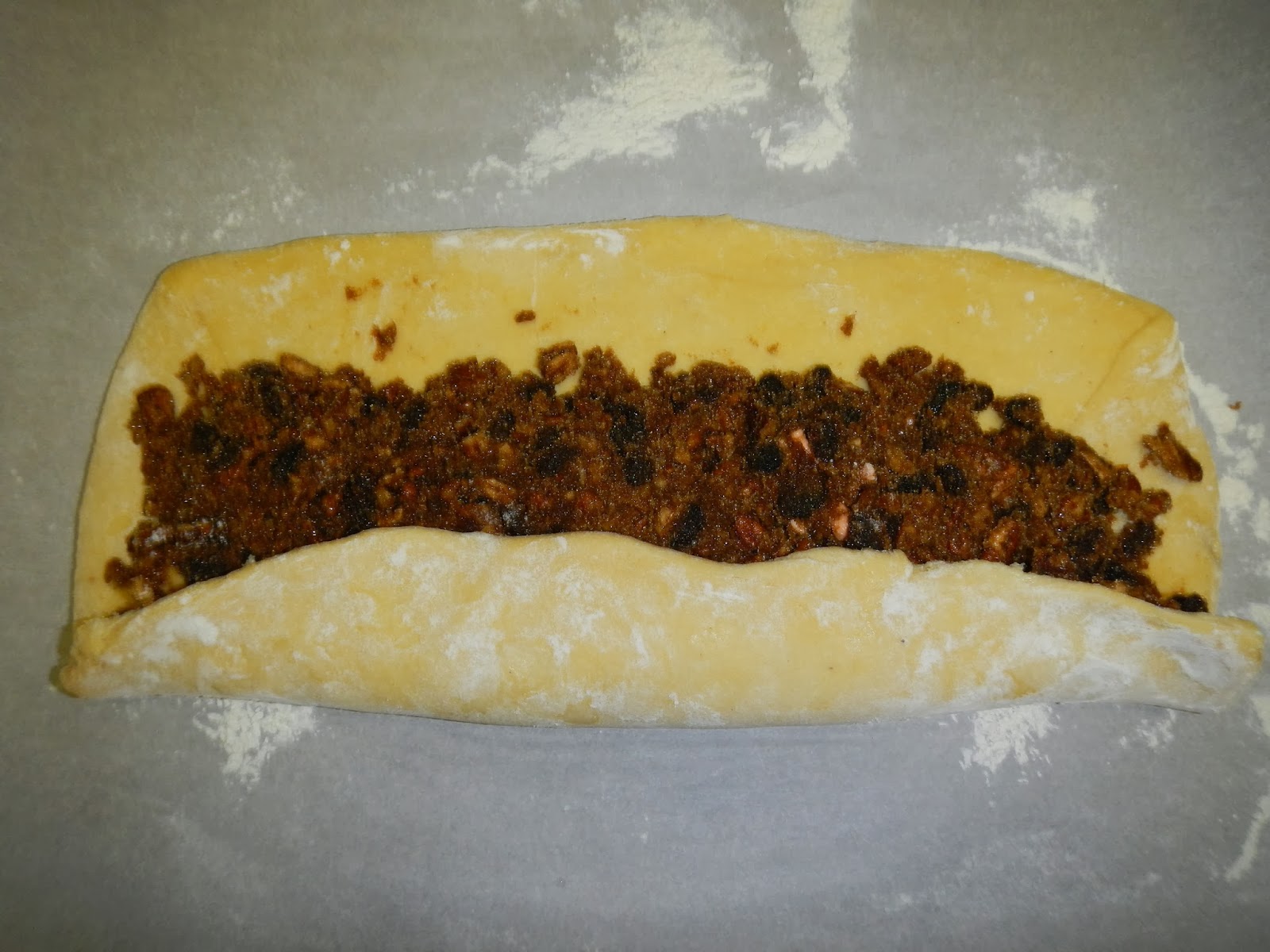 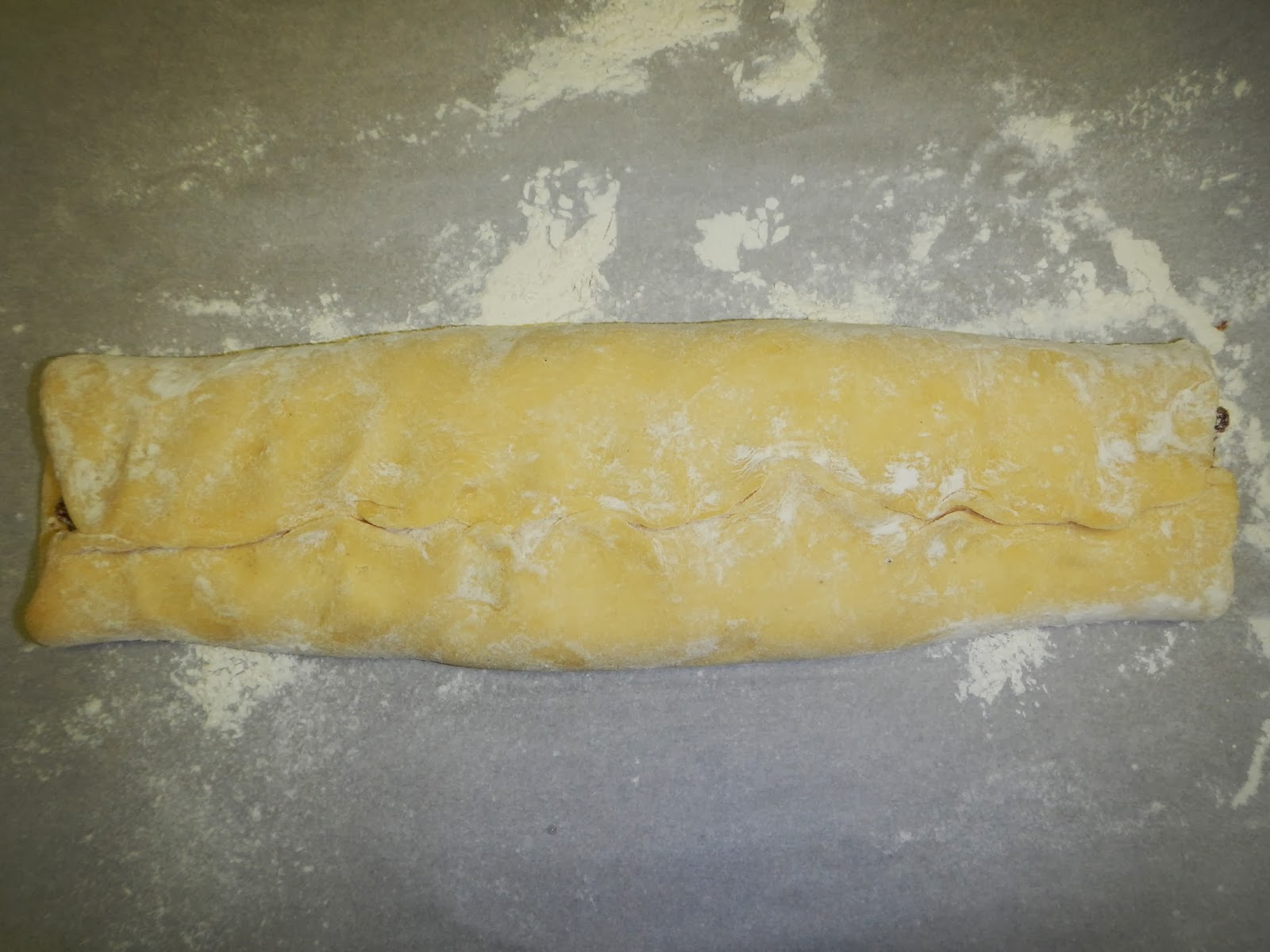 Cover a baking sheet with parchment.  Move the roll to the parchment, make it into a circle, and then tuck one end into the other to complete the circle.  Pinch it to seal it.  Cover it loosely with plastic wrap and set it in a warm place to rise for 2 hours.  It should double in size. 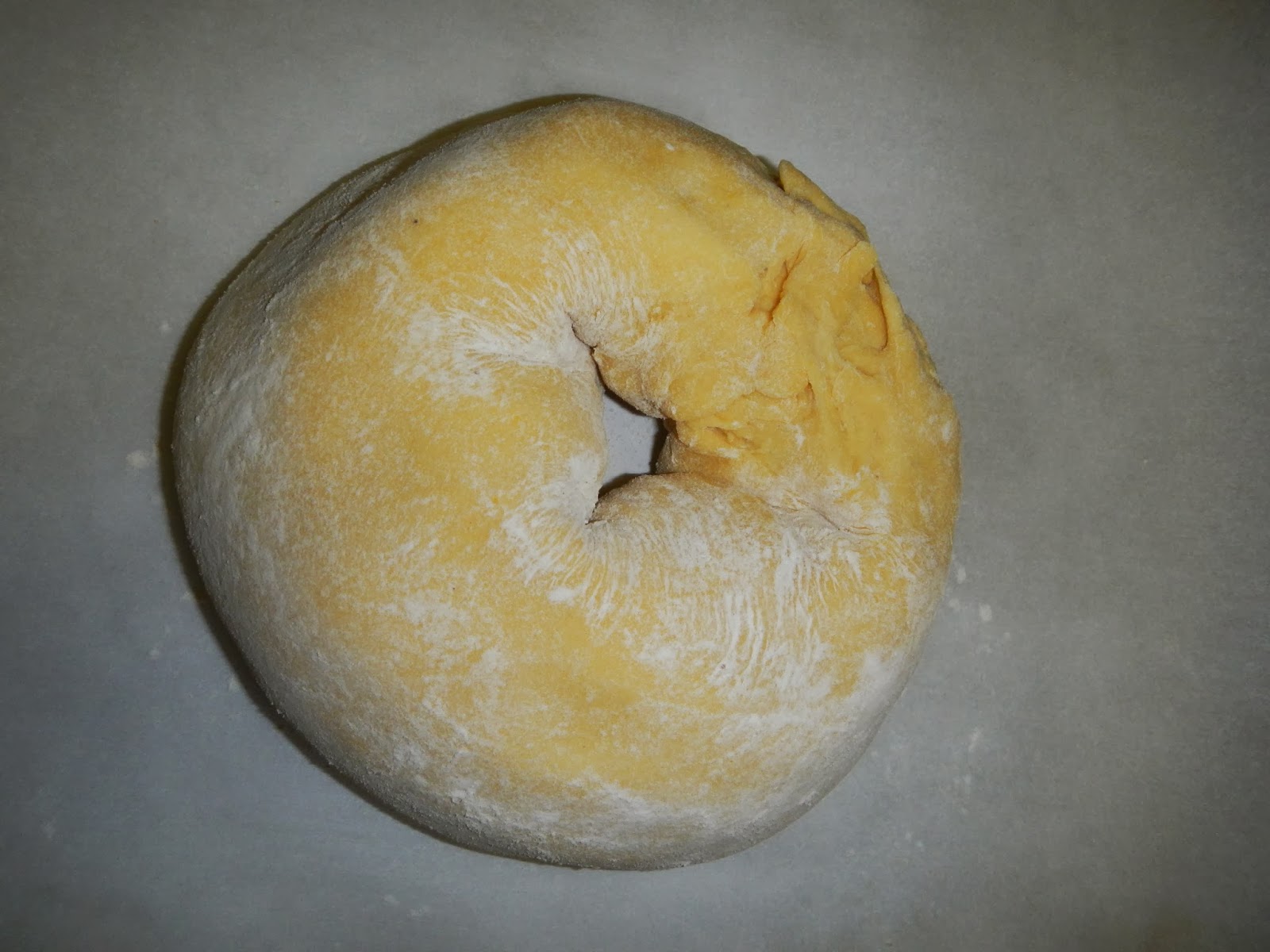 Heat the oven to 350, and when it's ready, bake the cake for about 40 minutes, until it is golden and firm.  Set it to cool on a baking rack.

Make a quick glaze by mixing a little milk or water with powdered sugar to make a drizzling consistency.  It always takes a lot less liquid than you think it will, so start small. 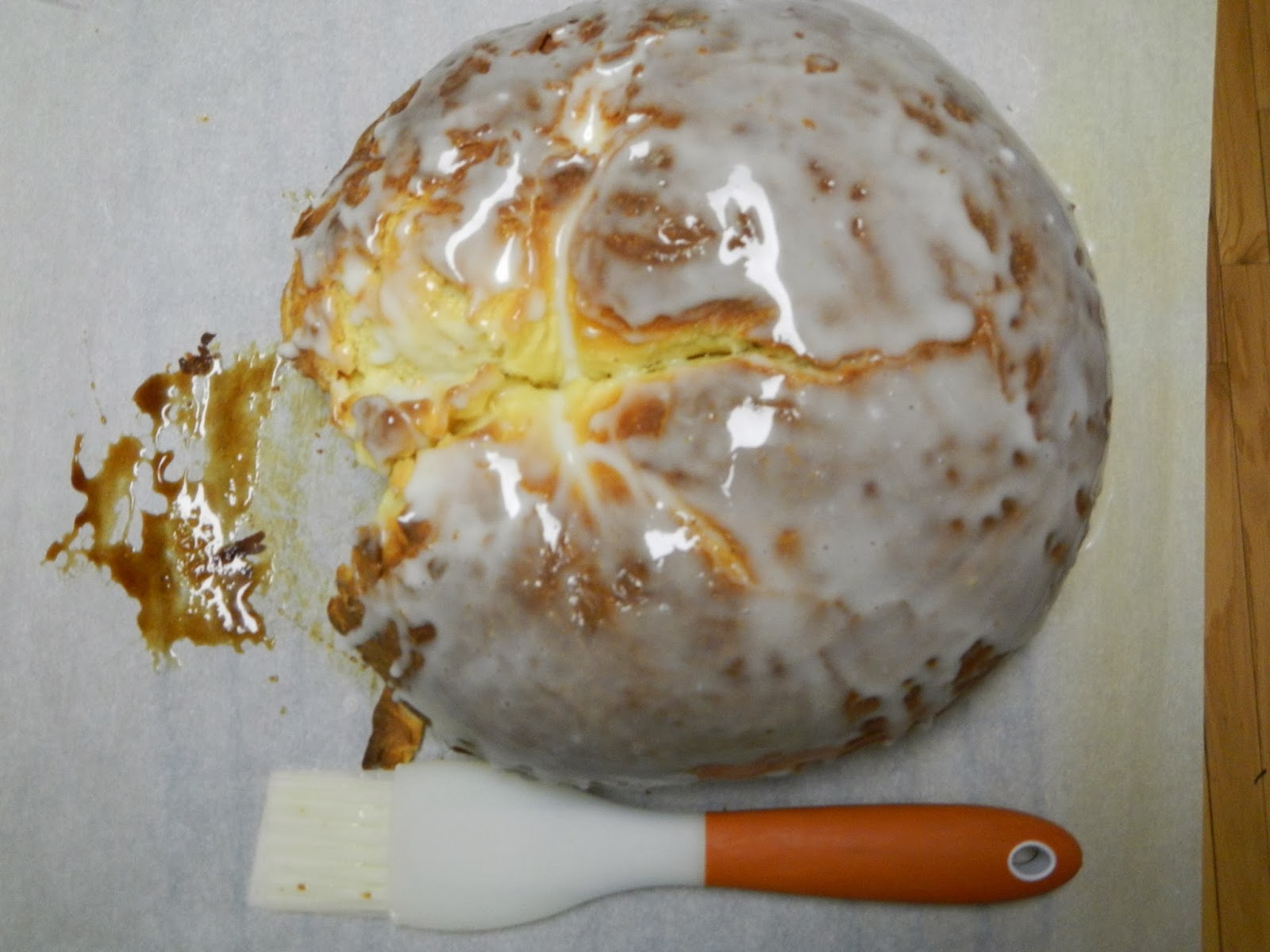 You can use pre-colored sugar, if you'd like, or you can take small bowls and mix your own sugar with food coloring to make purple, green, and yellow sugar. 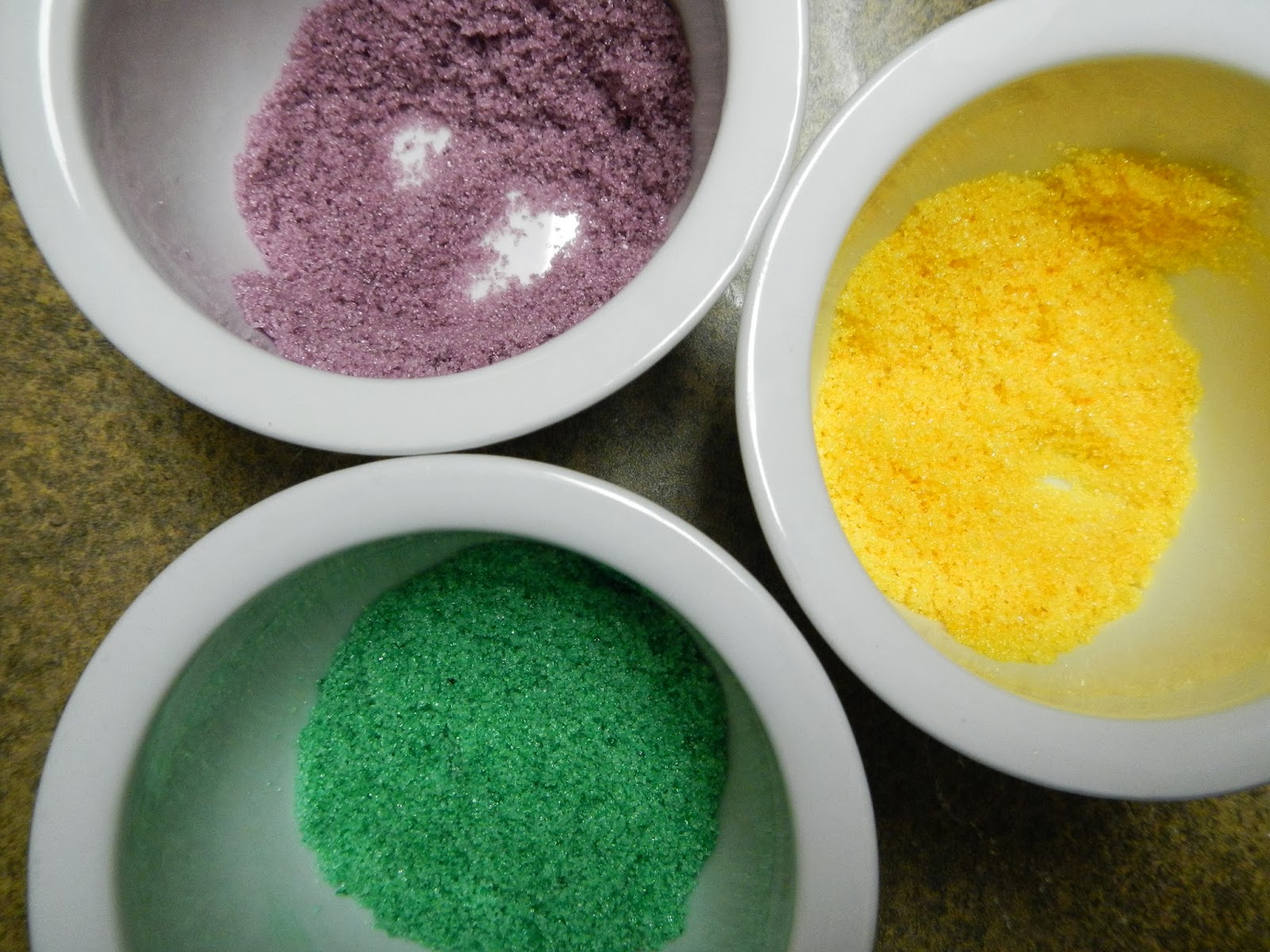 Cover the cooled cake with the glaze, then sprinkle with thick stripes of the sugars.  Drizzle with more glaze on top. 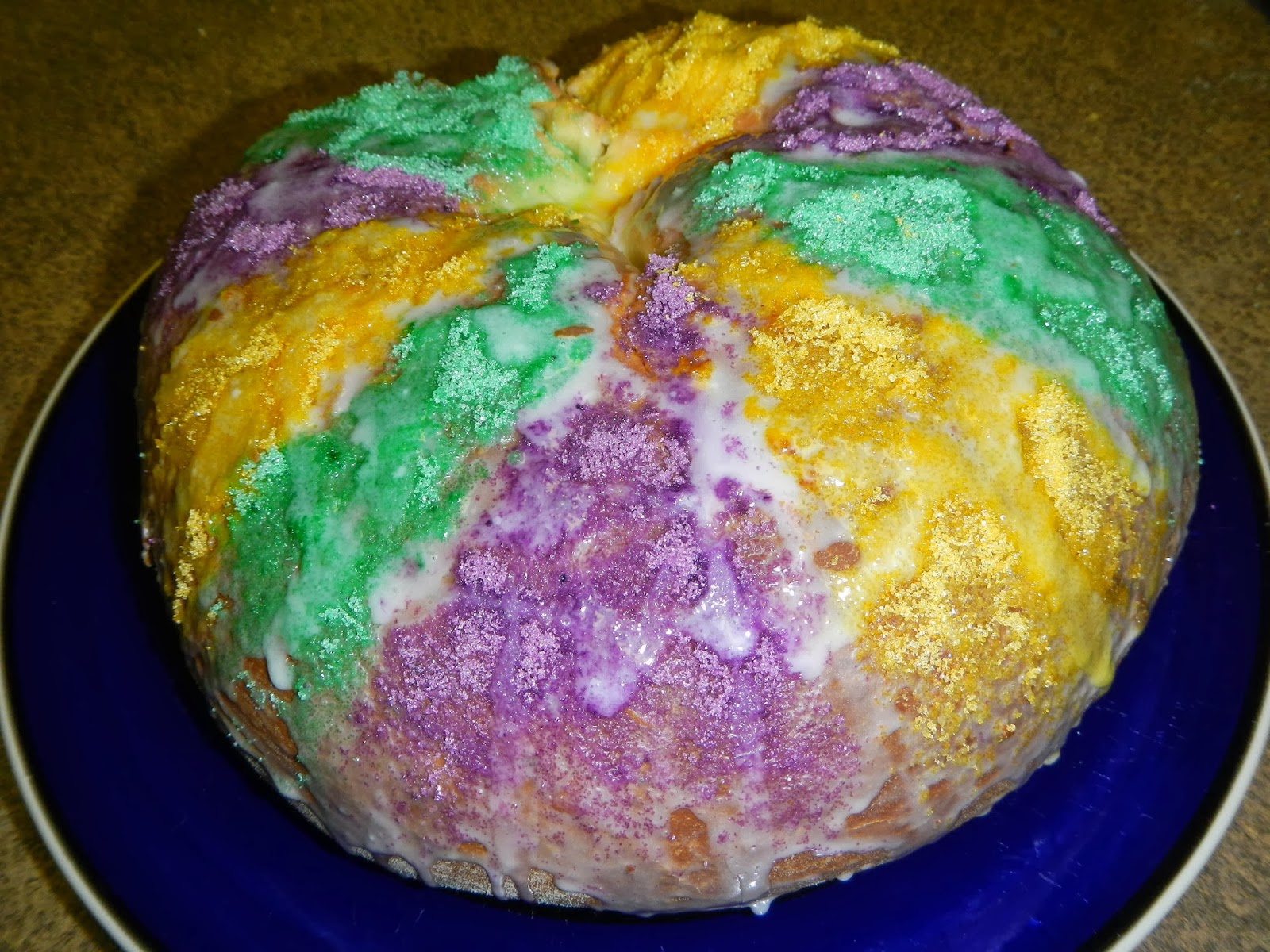 Slice and serve!  Celebrate the Mardi Gras "king" when they find the baby.  Enjoy the Fat Tuesday indulgence. 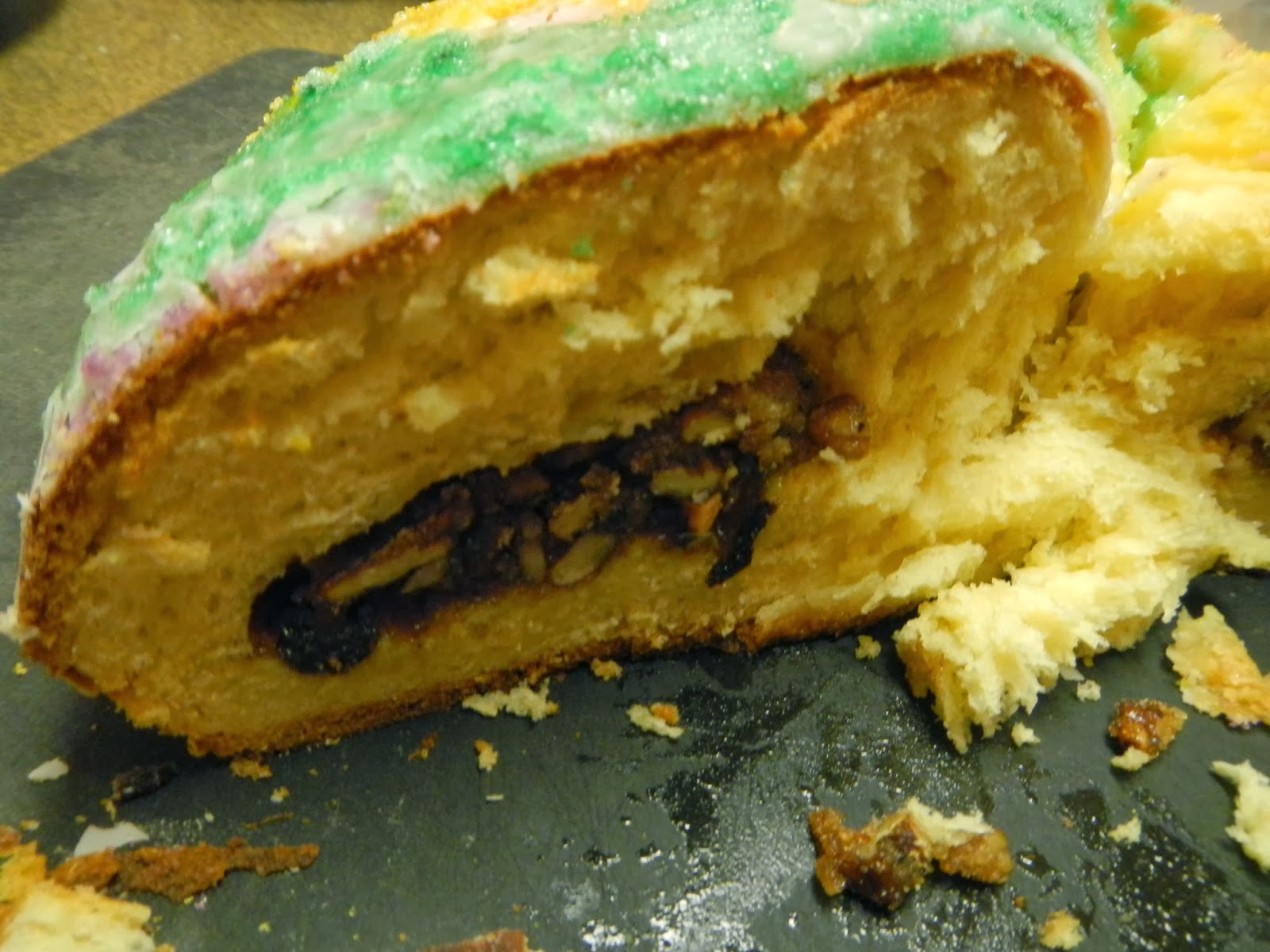