Cook it Once, Cook it Twice, Cooking Chicken Soup...

Okay, so, if you read the last post, you now have a pretty good recipe for a roasted chicken.  If your house is anything like mine, when you're done with it, you might not have much left except for the bones.  You could throw them away, or you could use them to make even more yumminess by making some chicken stock.

My apologies in advance, but I don't have pictures for the stock part.  It's something that I generally throw together without even really thinking about it, much less about taking pictures to blog.  I'll have photos of the good stuff, I promise.  You'll have to use your imagination on the stock for now.

Really quick, for those of you wondering about the difference between stock and broth, from what I understand, broth is made with scraps and meat as well as bones, whereas stock is usually more just the bones.  This means broth is usually a little richer and deeper in flavor.  Lesson of the day.

So, grab the largest pot you have (seriously large, I use what looks like a giant lobster-boiling pot).  Quarter some onions and throw them in.  3-5, I would say, unless they are big.  Crush and peel some garlic cloves with the side of a knife, maybe 5-7 of them, and throw those in too.  Chop some celery into 4 inch pieces or so, and, you guessed it, throw that in as well.  3-5 stalks of it, and I like to get some of the center with the leaves as well...great flavor in there!  Take some whole peppercorns and throw those in.  At least a tablespoon of them, more if you like.  Then add a palmful of kosher salt.  I get a little crazy and add a few dashes of Tabasco sauce to my stocks as well.  Add the chicken carcass (or whatever bones you have...this works just as well for beef or other meats!) to the pot.  Then fill it with water to cover everything.  I usually fill it as high as I can, because I let it cook down for most of the day.

Bring all that to a boil, then reduce to a simmer, and simmer for as long as you want.  If it starts getting low on liquid, you can add more water, but you want it to reduce some to increase the flavor.  It's great to help humidify your house on a dry, cold, winter day!

When you're sick of it simmering, take it off the heat and let it cool.  You can skim any fat off the top if you'd like, but I don't usually do that myself.  Once it's cooled, go ahead and pour it through a strainer into another large pot or container to get all of the solid stuff out of it.  The other great thing about doing this in colder weather is that I can just stick my stockpot out in the garage to cool overnight.  Except that the last batch I made froze out there.  Oops.

So, that's the stock.  You can freeze it, keep it in the fridge (or cold garage) for about a week, or put it to good use right away!

Chicken soup is one of those bases that has unlimited potential.  I'm going to give you a few of our favorite quick versions of chicken soup, but feel free to experiment and find your own too!

First off is my personal favorite for a cold cure: Chop up a carrot, a stalk of celery, and an onion, really small.  Saute the veg in some butter in the bottom of a large pot for about 5 minutes to soften it.  Add some salt and pepper, and some poultry seasoning.  Then, take chicken stock or broth (and if you don't have your own, it's okay to used the boxed stuff!) and pour it over the sauteed veggies.  Bring it to a boil and boil for about 5 minutes.  Then throw in some cooked rice, heat through, and serve.  You could also go with noodles instead of rice.  Bam.  Take that, colds.

Next is a quick Mexican version:  Chop onion and a couple of cloves of garlic.  Saute with butter or olive oil in a large pot for 3 minutes or so.  Add chicken stock and a jalapeno, chopped into rounds, deseeded if you want less heat.  Boil, then simmer for 5 minutes or so.  Add cooked chicken, if you have it on hand, and top with tortilla chips, cheese, green onions, and/or sour cream.

And version #3 is what we went for the other day: Italian.  First, a little backstory.  There used to be a restaurant in the tiny town of Princeton, WI, that I absolutely loved.  It was called Mimi's, and John, the owner chef, made some of the best food I had eaten to that point.  He's one of those artists who can take simple things and make them dance on your tongue.  One of the things I loved to get there was the tortellini soup.  It was so delicious!  He also made a seasonal deep-friend cheesecake...don't even get me started on that!!!

Unfortunately, Mimi's didn't last, and from what I understand, John moved on to become a head chef at a high-end hotel in Milwaukee.  But I did figure out the tortellini soup...or at least, a manageable facsimile.

Crush 3 cloves of garlic, and saute them in olive oil in a large pot for about 2 minutes.  Add chicken broth, a little salt and pepper, and bring to a boil.

Add in a package of tortellini and cook according to the directions.  Mimi's had these tri-colored Italian tortellini, and Trader Joe's has some great pesto-filled tortellini that I love in this recipe too.  This time, I went with the spinach.  Any will do.  Cook for the amount of time on the pasta directions.

Then, and this is what makes it, get the toppings ready for your soup.  Chop some fresh basil, and use a veggie peeler to cut thin chips of Parmesan cheese.  Ladle the soup in the bowl, sprinkle on the basil, and put the cheese on top to melt down into silky delicious sheets.  It's so simple, but so good. 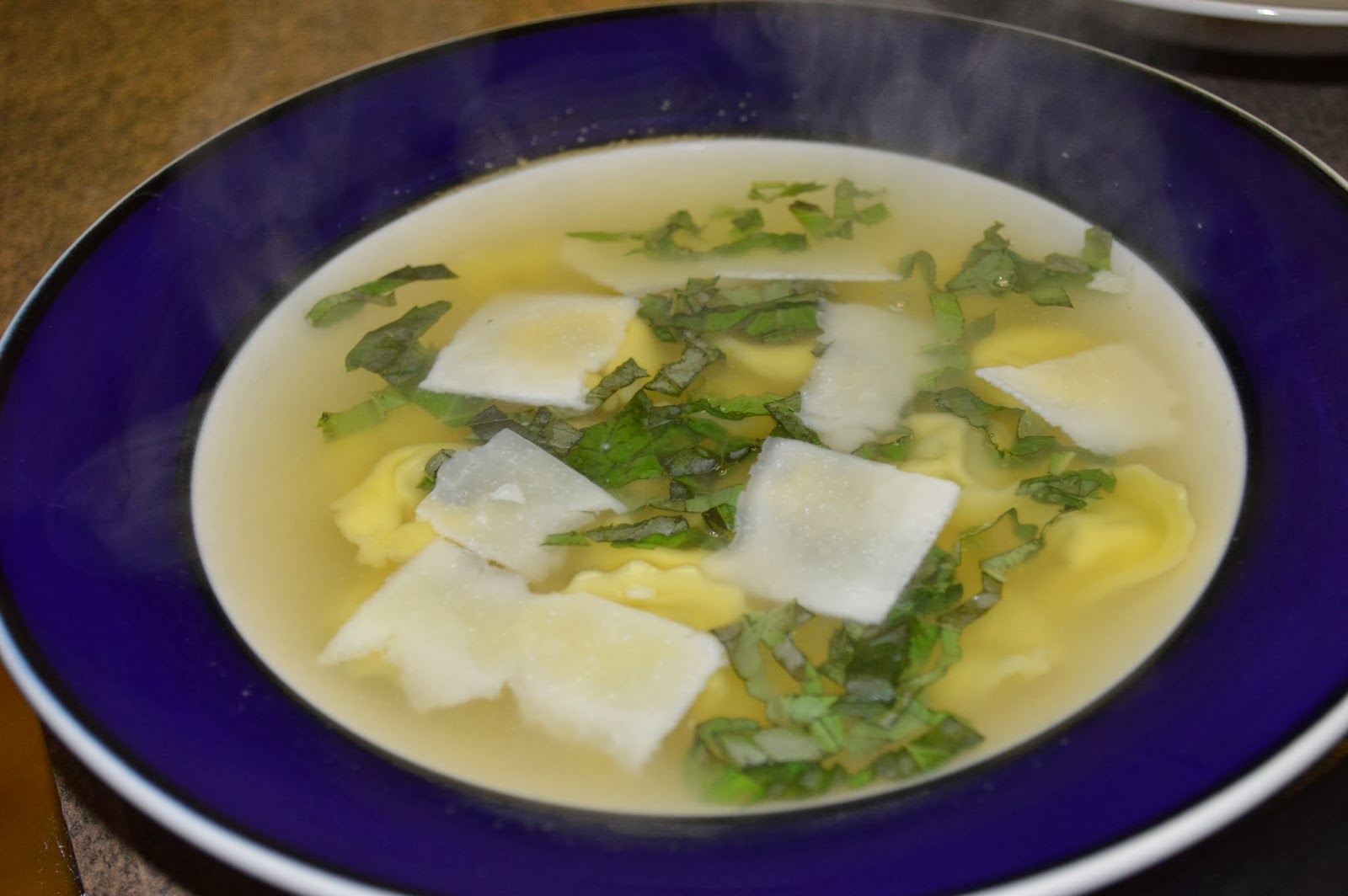 Seriously, have fun with your chicken soup.  You can make something so much better than the yellow sludge that comes out of a can with the mealy textured noodles in it.  Try going more Asian, with lemongrass or ginger.  Try adding some cloves to kick up the spice.  It's a quick, cheap, and delicious food to play around with.