I tend to have big ideas and then slack on some of the follow through.  I also tend to be a little spoiled by my husband, and if I mention (or, say, e-mail a link to) something I'm interested in, he will often buy that thing (within reason) for me for the next appropriate holiday.  Enter the cheese making kits.

Last year, right around Mother's Day, I saw that Williams-Sonoma had DIY cheese kits available.  And my inner food geek went a little nuts.  I started dropping hints, like, "Wow, with all the tomatoes and basil that we have in the garden, wouldn't it be nice to have fresh, homemade mozzarella to make caprese?", and "Grilled pizza is the bomb.  The only way it could be better is if we had some fresh, homemade mozzarella to top it with!".  You know, subtle. 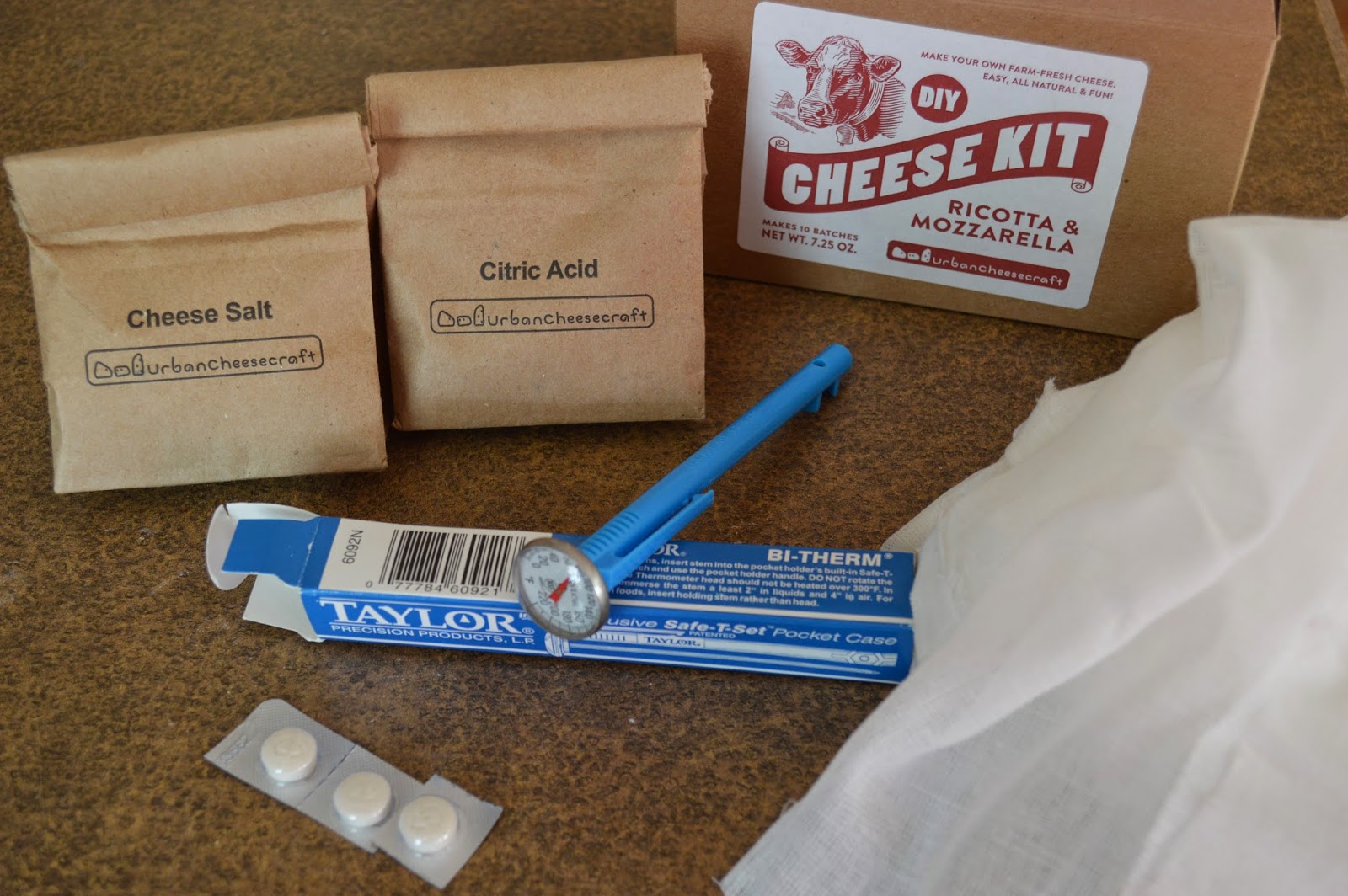 So, my wonderful hubs got me both the mozzarella/ricotta kit AND the goat cheese kit.  I was totally excited.  Then I got overwhelmed.  Each round of cheese takes a gallon of milk ...goat's milk for the goat cheese.  That's a lot of milk wasted if it doesn't go right.  And the steps and notes were pages long.  Lots of places to mess up.  Plus, I wanted to be able to do it with the kids, but I knew that I couldn't figure it all out with 3 helpers "helping" me.  They can be, well, distracting.

So, fear got the better of me, and the kits have kind of just sat on the shelf.  Wah wah waaaahhhh.

Last week, when I placed my order with Amy's Organics for milk and eggs, I pushed myself off the ledge by ordering an extra gallon of whole milk.  That put me in the position of either making the cheese, or wasting an entire gallon of milk, which would make me ill to think about.  Amy gets the milk from Kilgus Farmstead, and with it being illegal (don't get me started) to buy raw milk in Illinois, Kilgus offers non-homogenized milk from pasture-fed cows, which is about the best we can do without buying our own cow.  It's delicious stuff, and I swear, when we made the switch to it, my nails and hair started growing faster. 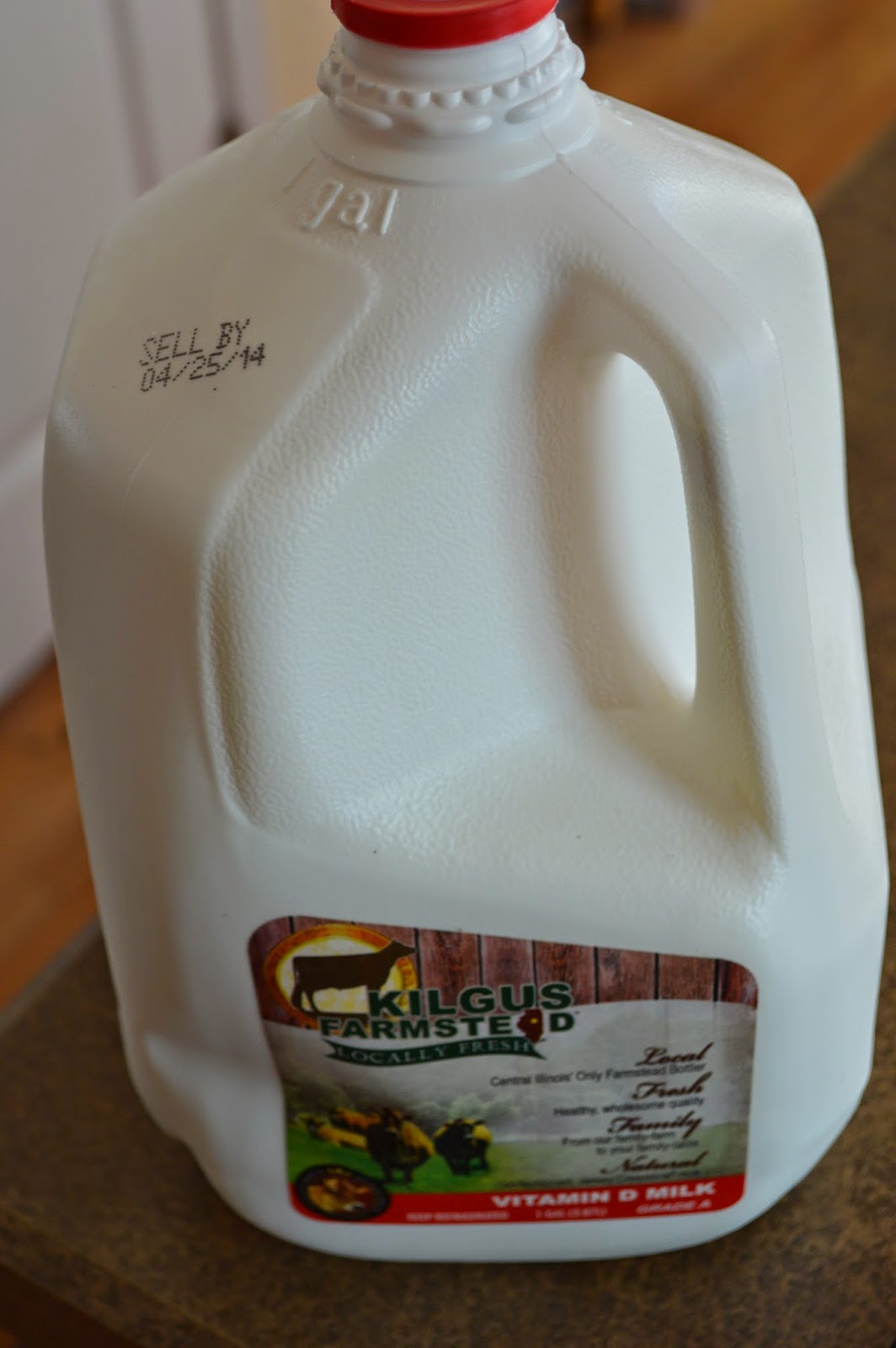 Anyhow, the directions said to be sure to use milk that wasn't ultra-pasteurized, or the cheese would be a total failure and your family would disown you and throw you out on the streets...or something like that.  So I figured that the Kilgus milk should do pretty well.

I read the directions over for the upteenth time, and then started in on the cheese.  The first couple steps were pretty simple.  I used distilled water, to be cautious.  The hardest part was cutting the small rennet tablets into quarters. 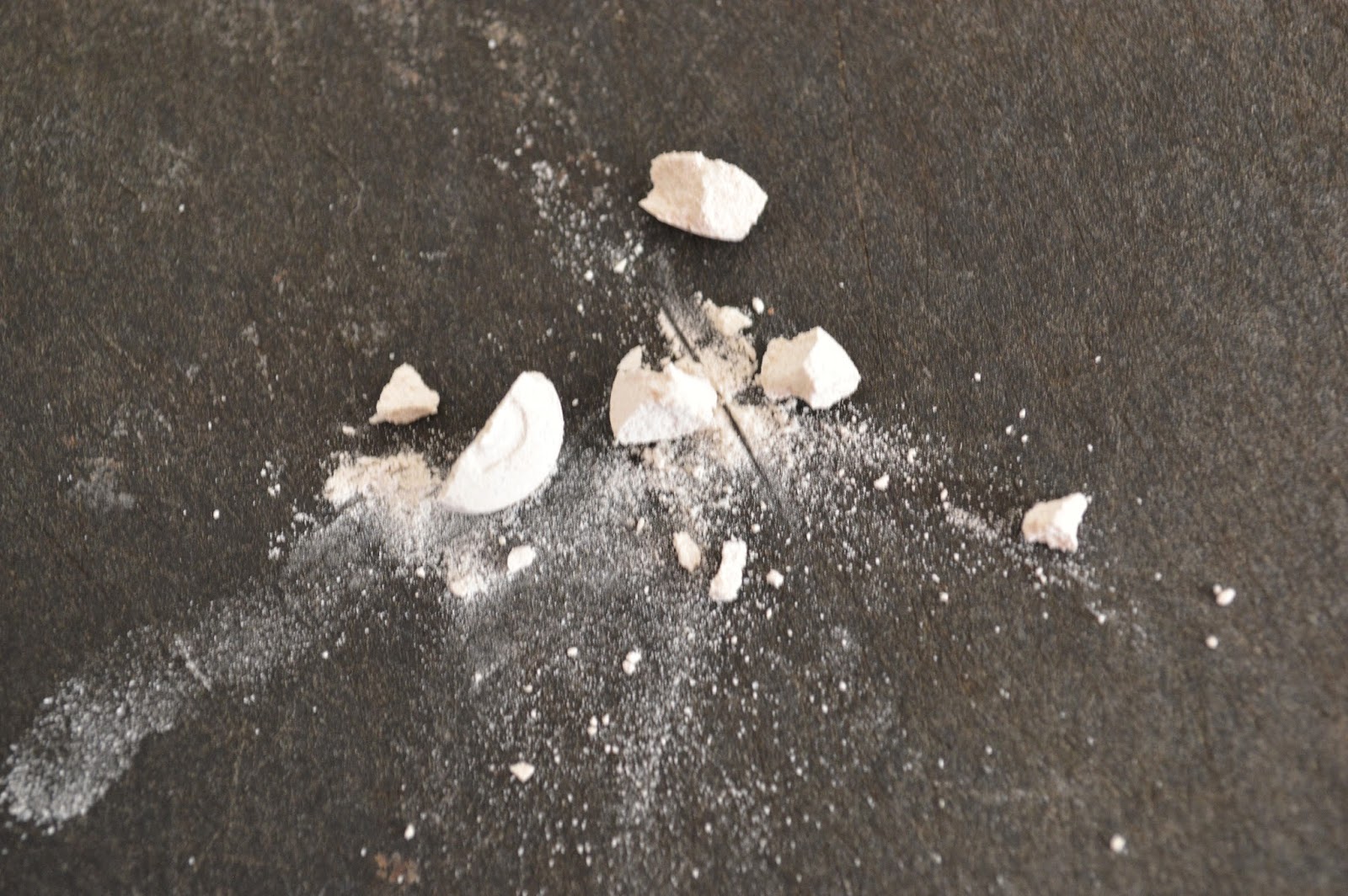 So, I dissolved the rennet in some water, and then in some other water, I dissolved some citric acid.  It's almost like a chemistry project more than cooking.

Then I took a big gulp, and dumped a whole gallon of milk in a large pot with the rennet solution, and slowly heated it up to 90 degrees. 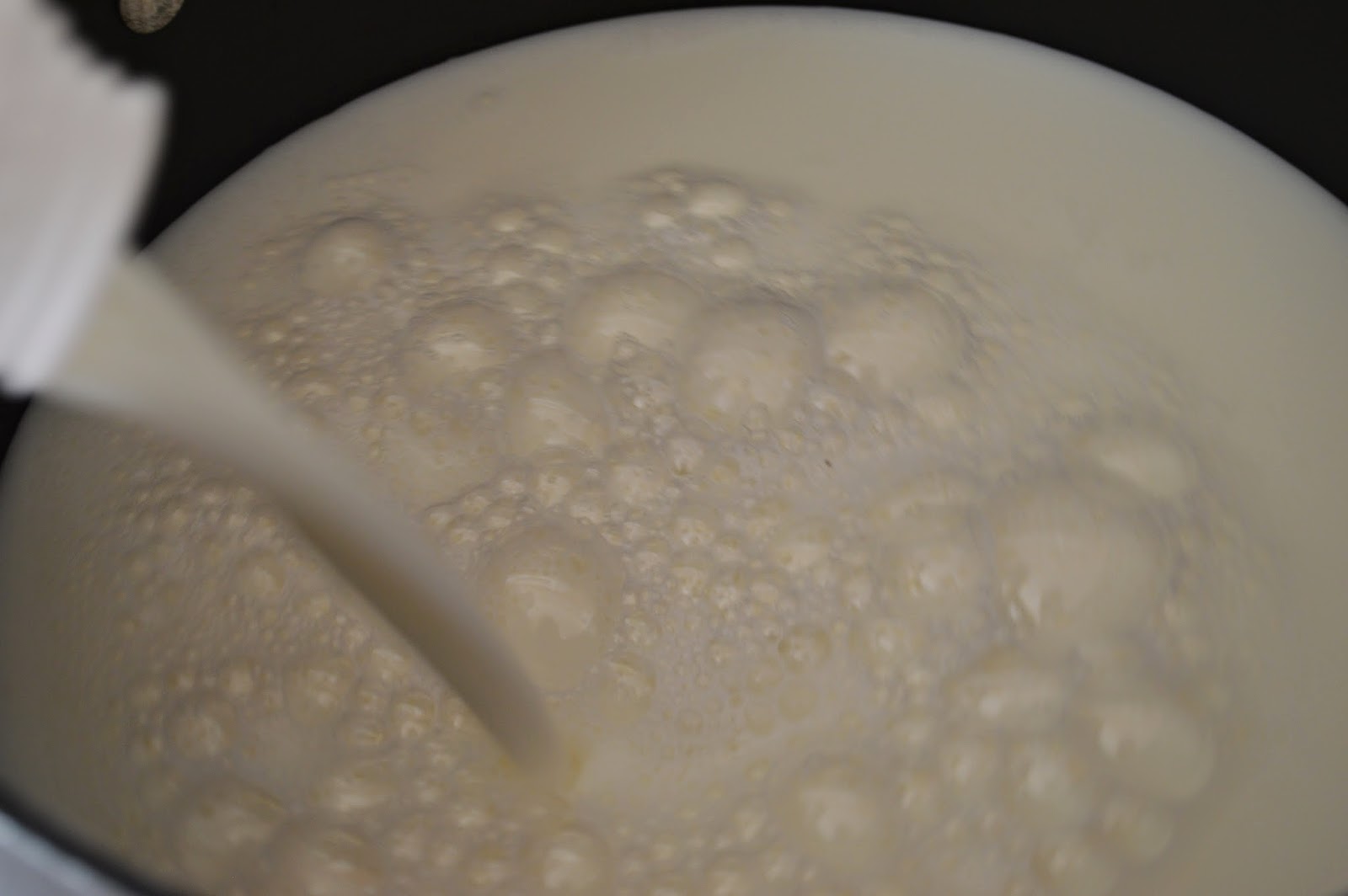 My biggest complaint in this whole process is that the thermometer that they give you with the kit is heartbreakingly small to go into a huge pot like this, and I had a couple of frustrating times where I accidentally dropped the thermometer into the milk.  I thought about using my candy thermometer that clips to the side of the pot, but I didn't want to alter from the cheesemaking guide, in fear that a different thermometer would screw it up.  I'm pretty sure that WS sells some kind of thermometer-holding apparatus for like $50 that would help me out here. 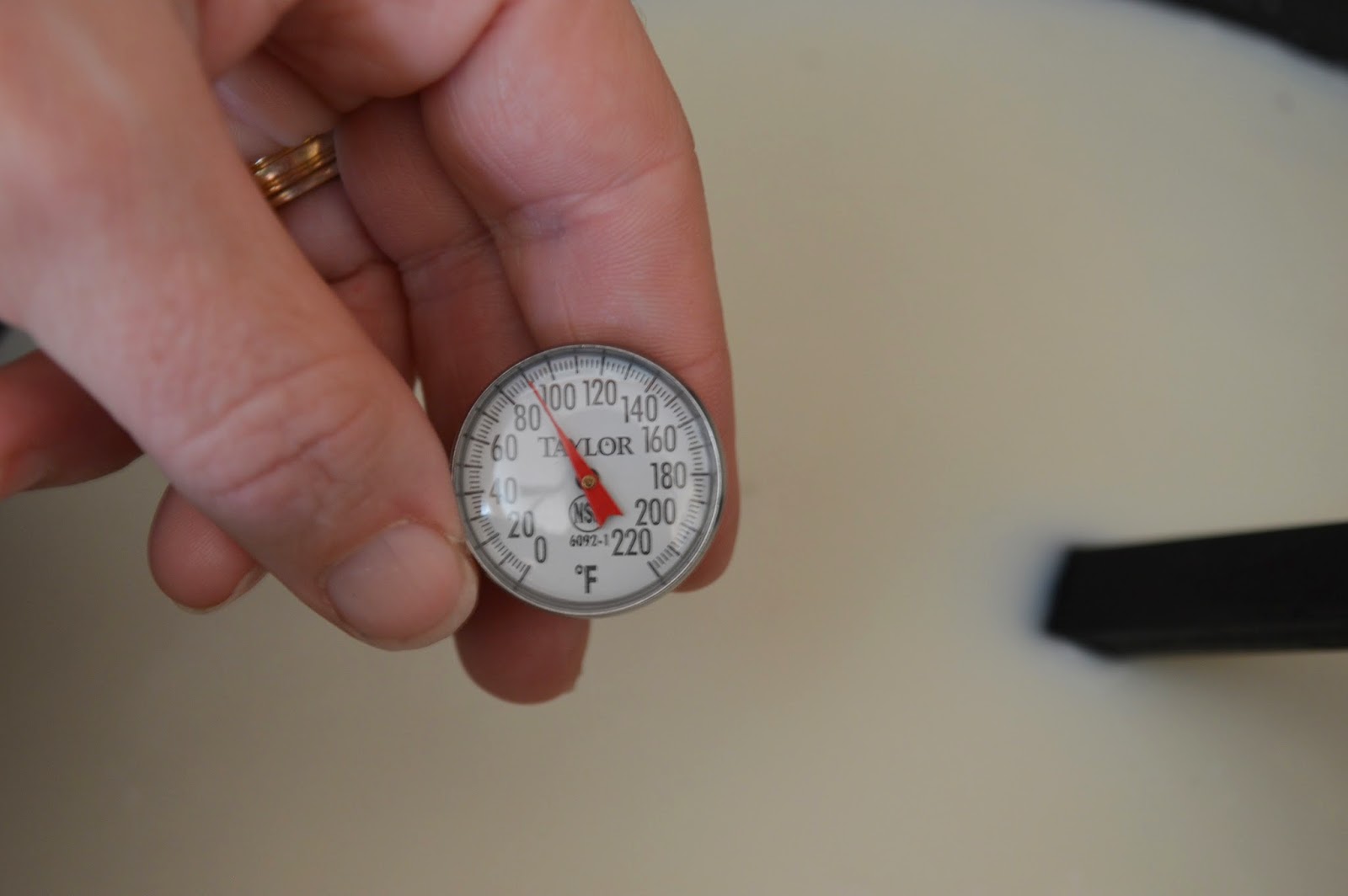 So, once I got the milk heated, the directions said to mix in the citric acid solution and jkeep heating it a bit longer.  As soon as I poured the citric acid in, the milk started dividing into curds and whey.  It was pretty much instant, and very ego-inflating.  I may or may not have danced around my kitchen yelling "I made cheese!  Bow down to the cheese maker!". 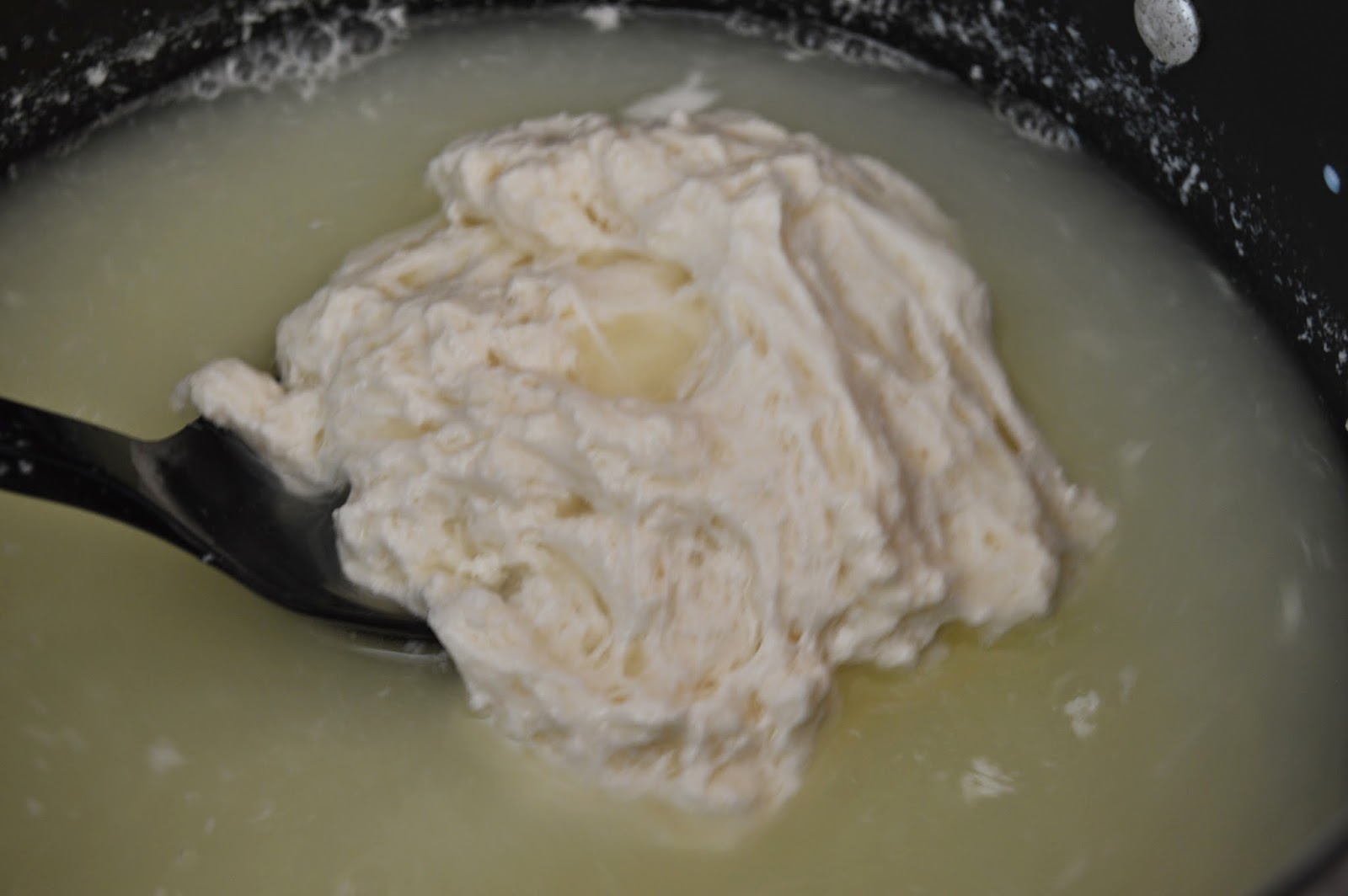 After that, there are a couple of routes you can go with finishing the cheese up.  One uses the microwave, and one doesn't.  I know that no one can agree on how harmful or harmless the microwave is, and I'm not going to lie and say I never use it, but I do prefer to avoid it.  I'm pretty sure people were making cheese long before the microwave was even a twinkle in its inventor's eye.  So, I pulled out the curds (which were pretty much one large lump) and started heating the whey up to 185 degrees. 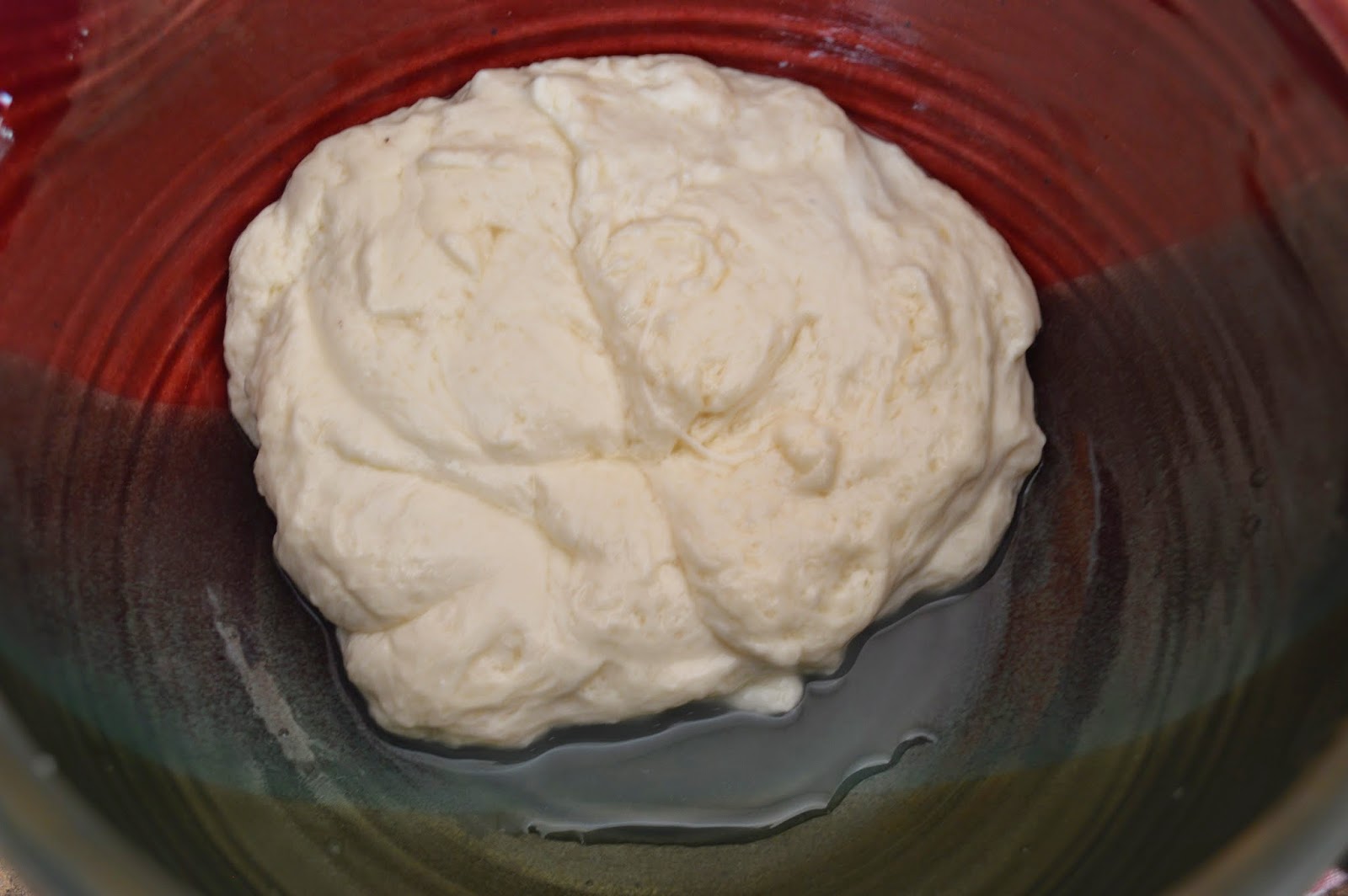 Then I took the curd and divided it into two balls.  With each curd ball, I dipped it into the hot water for a few minutes.  Then I freaked out because the cheese went all stringy and melty, which was part awesome (because it worked just like real cheese should) and part terrifying (because I still had steps to do, and this cheese was unruly).  I moved the cheese to my board and kneaded in the cheese salt. 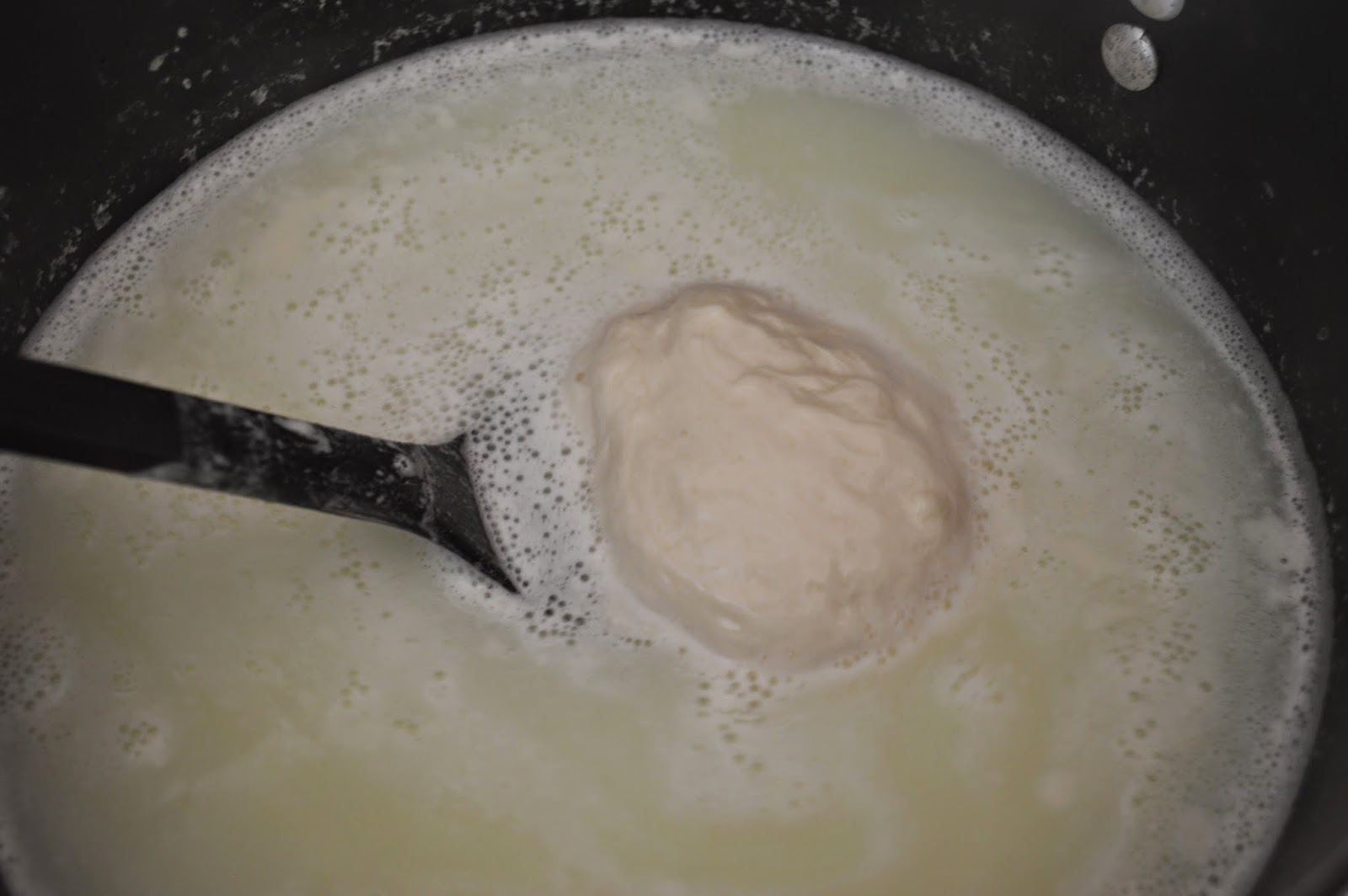 Side note, I did taste the cheese salt on its own, because I'm a curious person.  It's just salt, but very fine in it's flake.  Dissolves quickly, which I'm guessing makes it perfect for going into cheese.  Doesn't taste at all cheesy, and it's nothing like that orange stuff at the movie theaters that they put on popcorn. 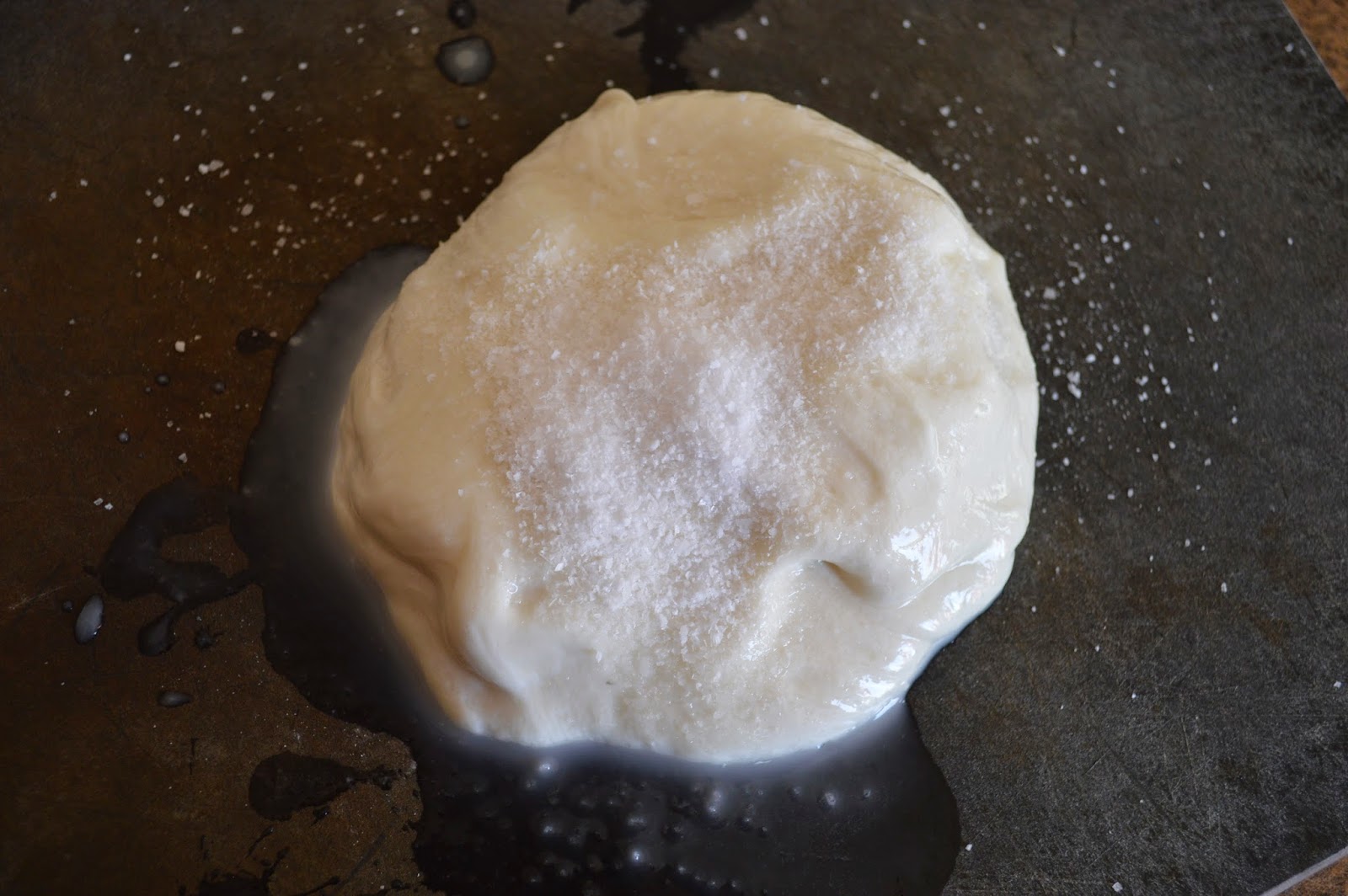 So I kneaded in the salt, but didn't go outside the box and add in herbs and stuff, this being my first time.  I wanted to be a purist.  In retrospect, I will probably reheat my cheese after salting next time, or knead a little less.

That was pretty much it!  The end product looked a little odd, with some layering to it, which I think was due to my overkneading.  I was worried about the texture being funky, but it wasn't, and despite it's quirky looks, it still tasted a million times better than even the fresh mozz I get from the deli at our local European market. 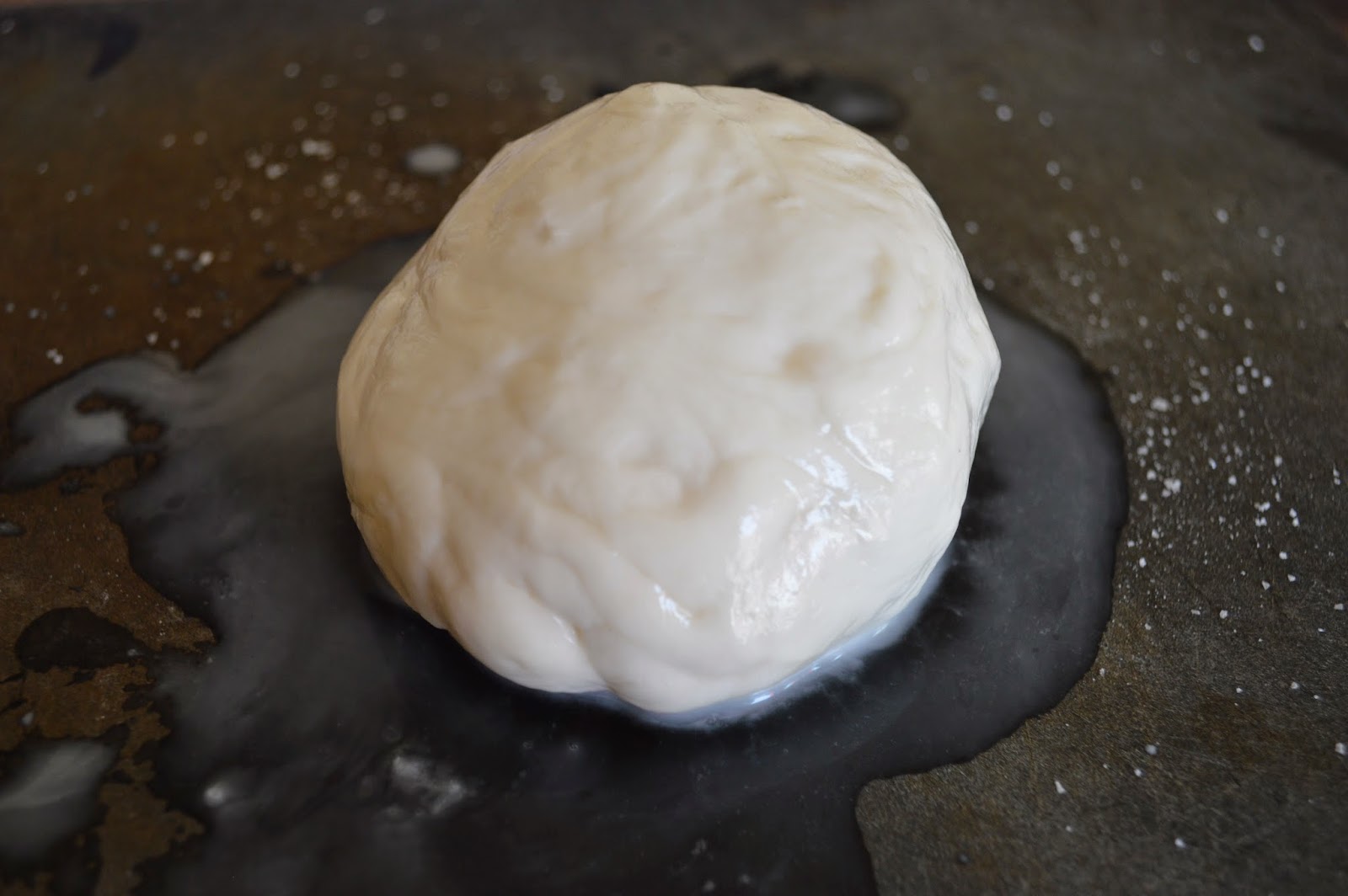 I made a favorite of mine and the hubs for dinner: caprese.  Sadly, not from basil and tomatoes from our garden yet, but that will be sure to come.  All you do is slice up your mozzarella, slice some tomatoes (PSA: please, don't store tomatoes in the fridge!  Keep them out on your counter and use them before too long.  It really does make a difference!), layer both with fresh basil leaves, drizzle it with olive oil and maybe some balsamic if you feel like it, and sprinkle it with salt and fresh ground pepper.  It tastes like Italian summer! 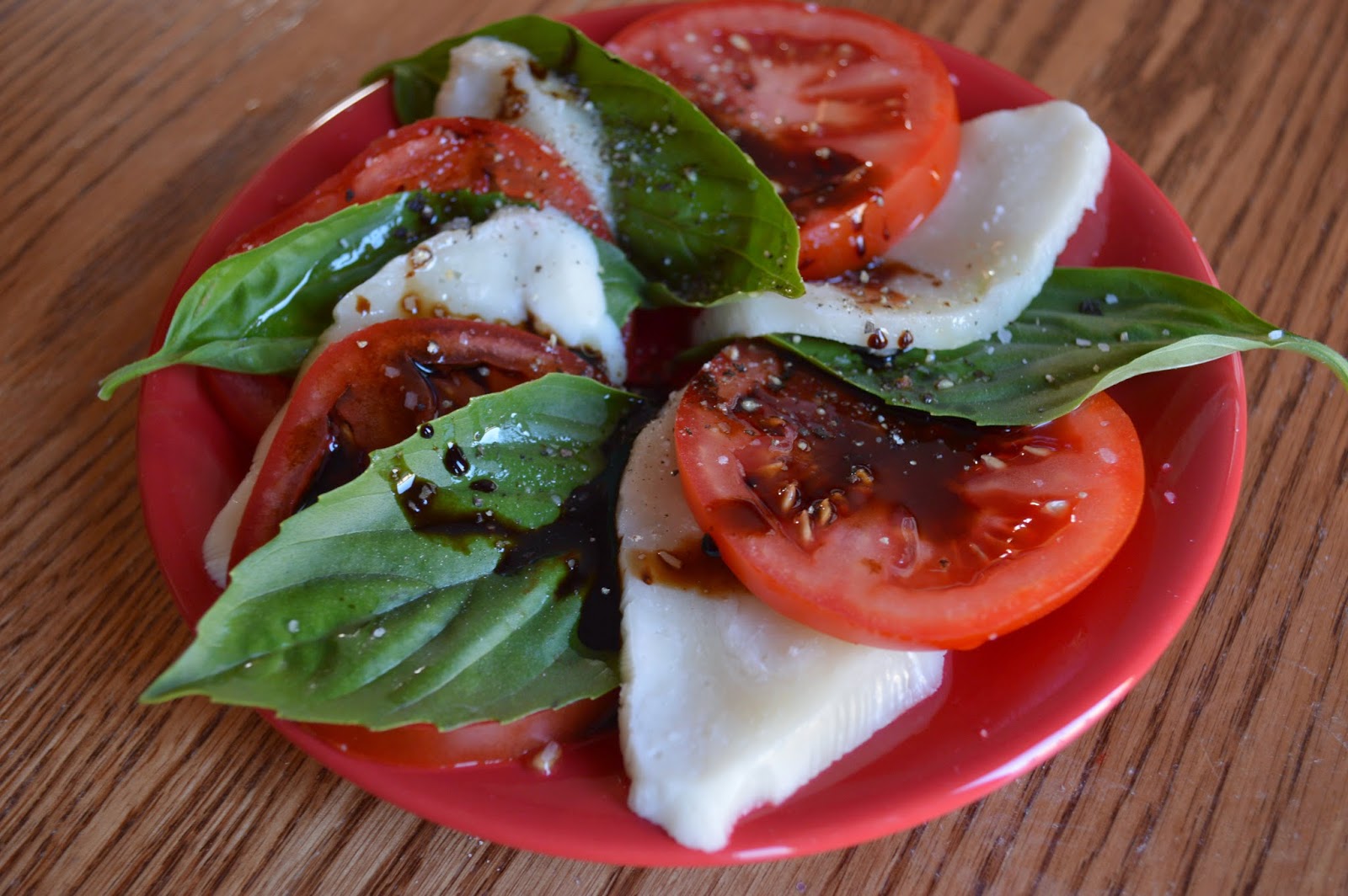 The kits have enough materials to make several rounds of cheese, and I think that after finishing up that amount, I would feel confident enough to go it on my own and order my own rennet and citric acid.  I'm sure that you could go kit-free and just follow some good step-by-step guides out there too.  Also, while a gallon of quality milk isn't cheap, this is one of those cases where it's worth the small investment for the results.  Fresh mozzarella isn't cheap either, and the homemade stuff really is on a different plane from anything you buy at the store.

Oh, and Honey, if you're reading this, I could totally go for a San Francisco sourdough starter kit this year.  Wouldn't some fresh, warm sourdough be a great side to that delicious caprese salad?  *wink wink* 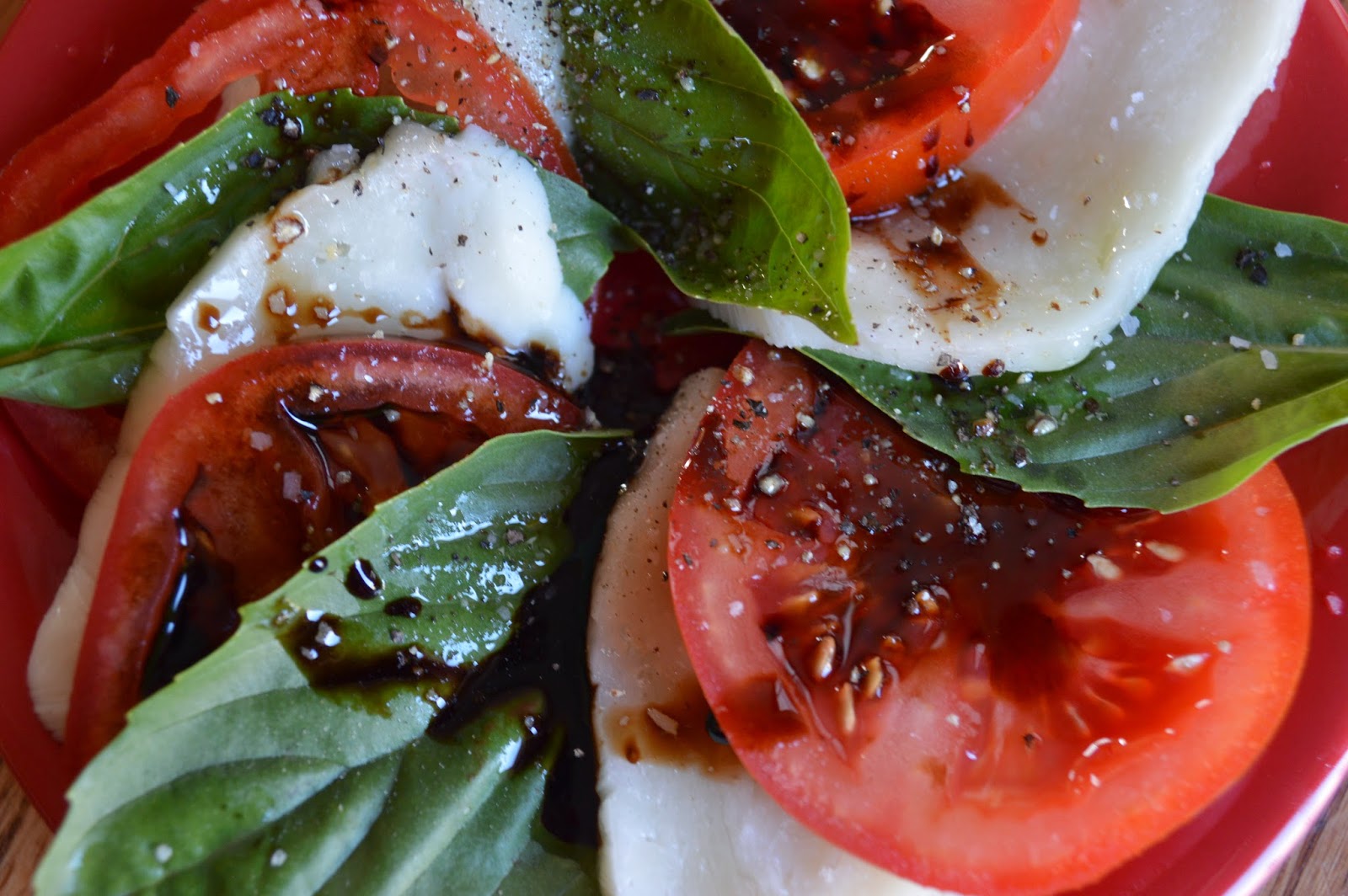