These Eggs are for the Birds!

Easter is nearly here, and I know that you guys are desperate for some egg-citing ideas!

Ugh.  Okay, that's the only pun I am going to throw out today...it actually made me physically gag to type it.  I am so, so sorry.

Seriously though, Easter and eggs go hand in hand.  And, for my first time, I'm joining in on a Tinkerlab Creative Challenge!  Every other month, Tinkerlab extends an open invitation for kids to create with a common inspiration, and this month, it's eggs!

The weather around here has FINALLY started to get a bit better, although we did have another inch or two of snow last week, but let's not dwell, and my kids have rocketed towards outdoor activities.  When we were talking about what egg project they wanted to do, the first thing that came to their twisted little minds was throwing eggs at each other.  Obviously, that was a Mama ix-nay.  The next several ideas had similar yolk-smashing themes, and were also quickly swatted down.  I told them they would have to clean up whatever destruction was made, and the ideas got a whole lot tamer.

One of the girls mentioned an idea that she had seen in a magazine, where you made shapes out of birdseed to feed the birds.  We've done pine cone feeders with suet and birdseed, and with peanut butter and birdseed, but eggs were a new vehicle.  The kids quickly decided that making the birds eat out of real eggshells was kind of an abomination, like feeding a fish a tuna sandwich.  So we talked about using plastic eggs.  At first, the idea was just to fill them with seed and set them out for the birds.  That might be fun to watch, but wasn't a very exciting idea.  Pretty lame, project-wise.  Then the kids started talking about how we could use the eggs as molds and stick the eggs together with peanut butter or something.  A quick hop on Google, and I found that lots of people make various molds of birdseed.  Sites gave instructions to use things like corn syrup and flour and gelatin to bind the seeds.  Gelatin seemed to make good sense, and when I came across a method for molding that used just the gelatin, water, and the birdseed, I was sold.

So, we got everything we needed: 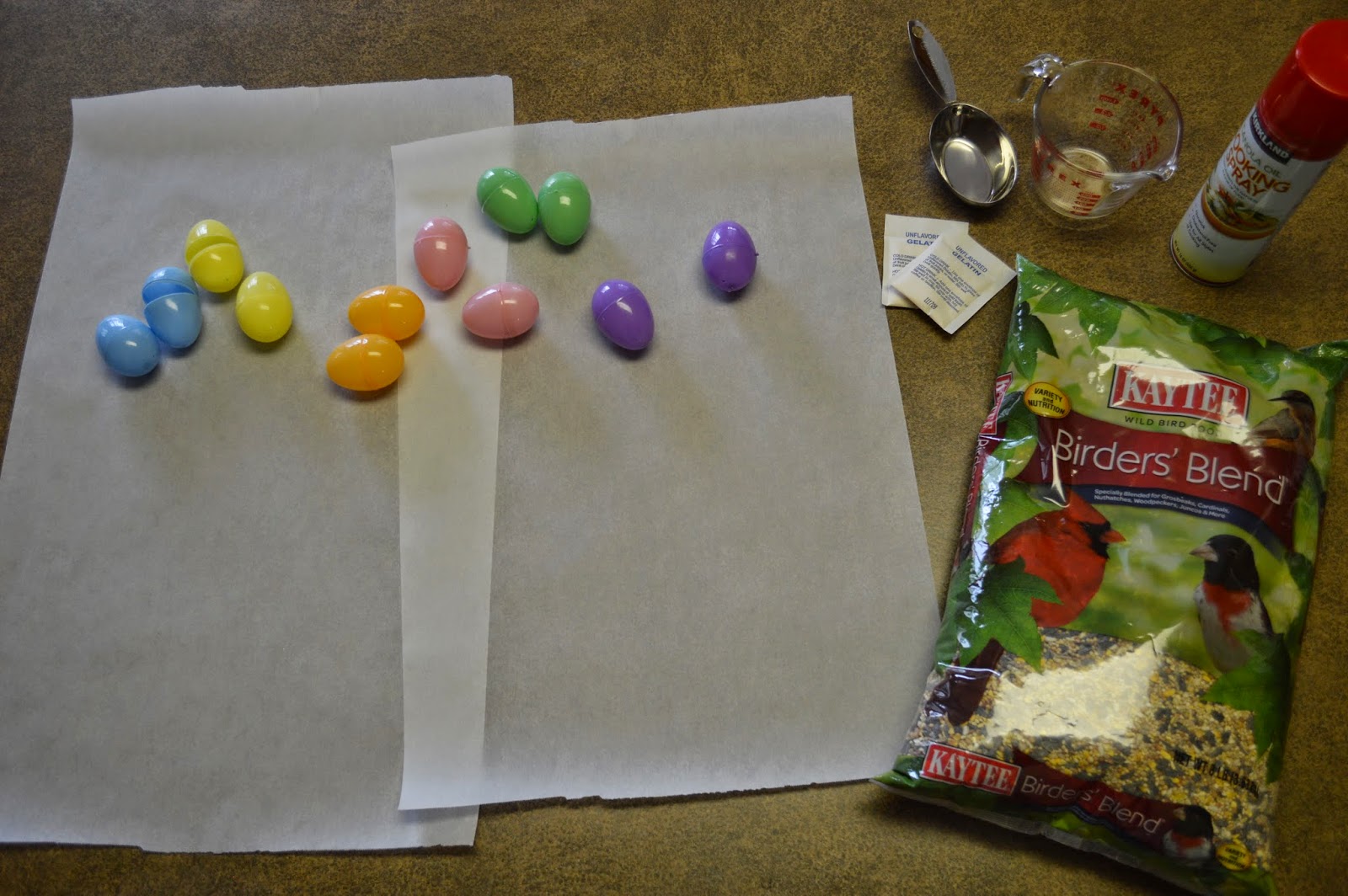 I set my teakettle on to boil.  We also put down some parchment paper, in anticipation of some messiness.  While we were waiting for the water to get hot, the kids each sprayed the insides of their plastic eggs with cooking spray.  Hello, messiness. When the water got hot, I carefully poured it into a measuring cup, having the kids stop me when it got to a half cup.  Well, somewhere around a half cup. 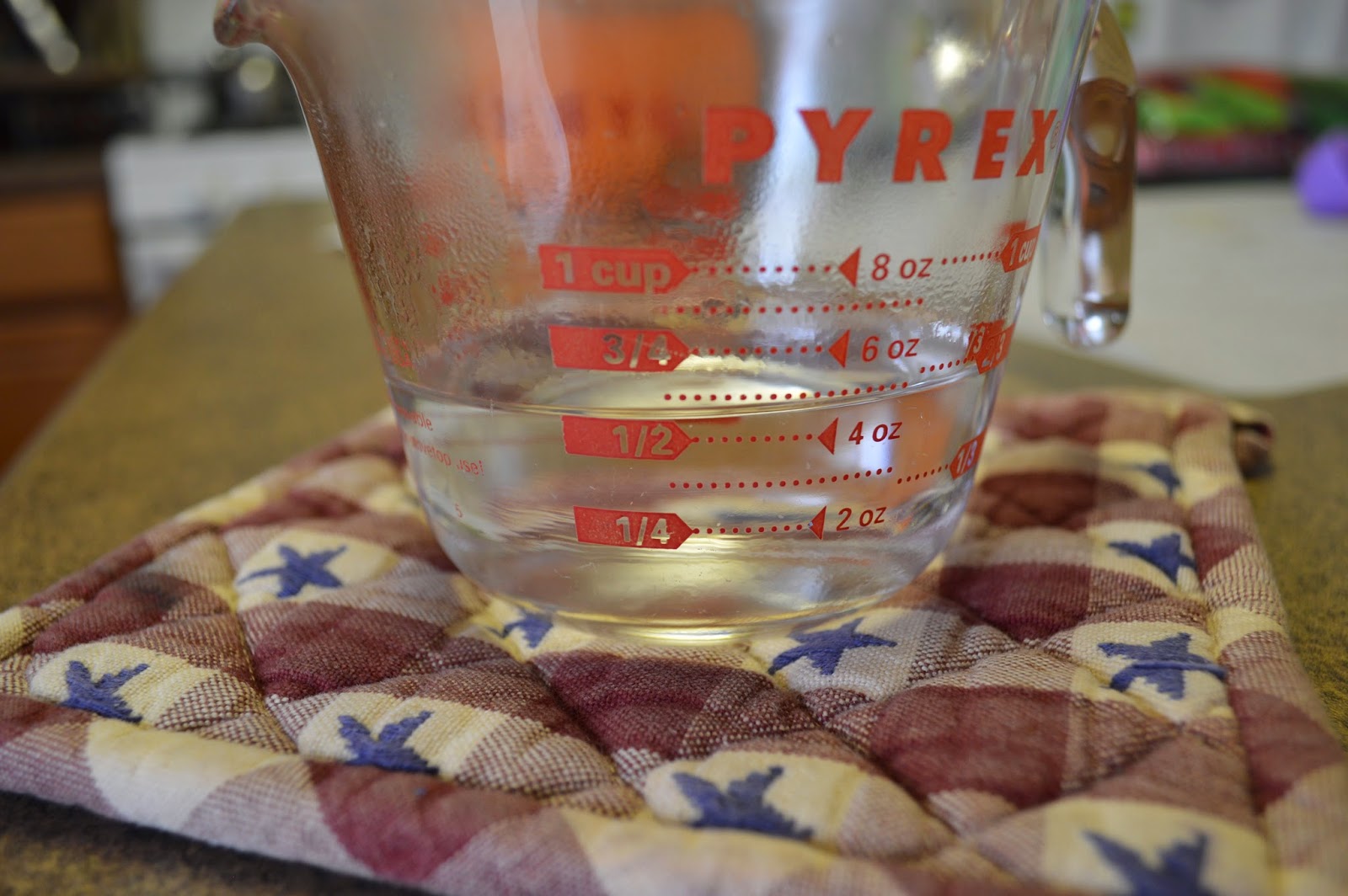 Then we added the gelatin, and they took turns stirring until it was pretty much dissolved. They also did a pretty awesome a capella version of "Squirt That Gelatin Monster" from Phineas and Ferb.  If you're not familiar, you can see the whole song here. 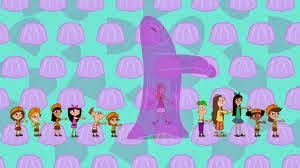 The kids measured (math skills, holla!) 2 and a half cups of the bird seed into a bigger bowl. 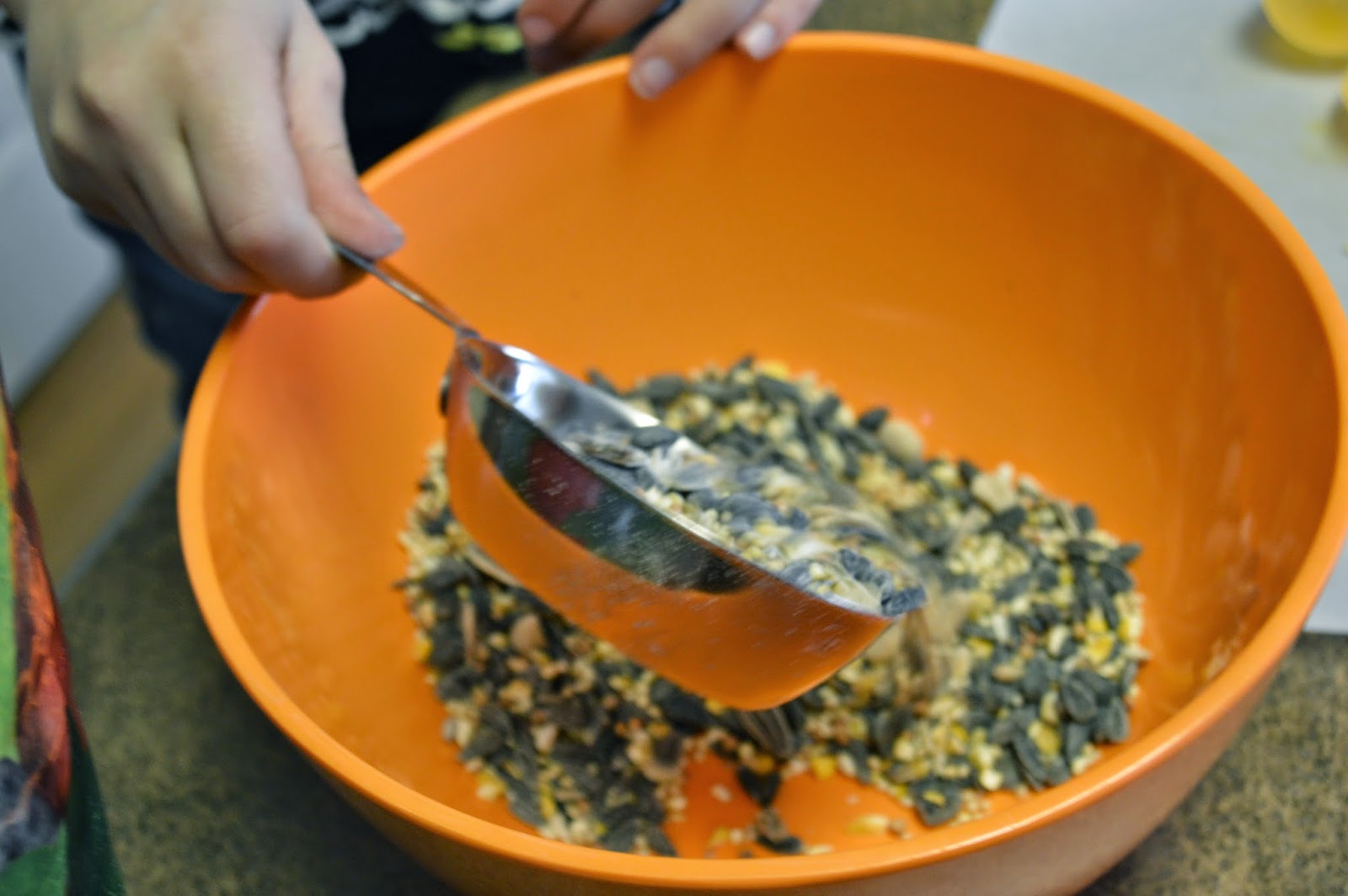 Next, they poured in the gelatin liquid and took turns stirring it up. 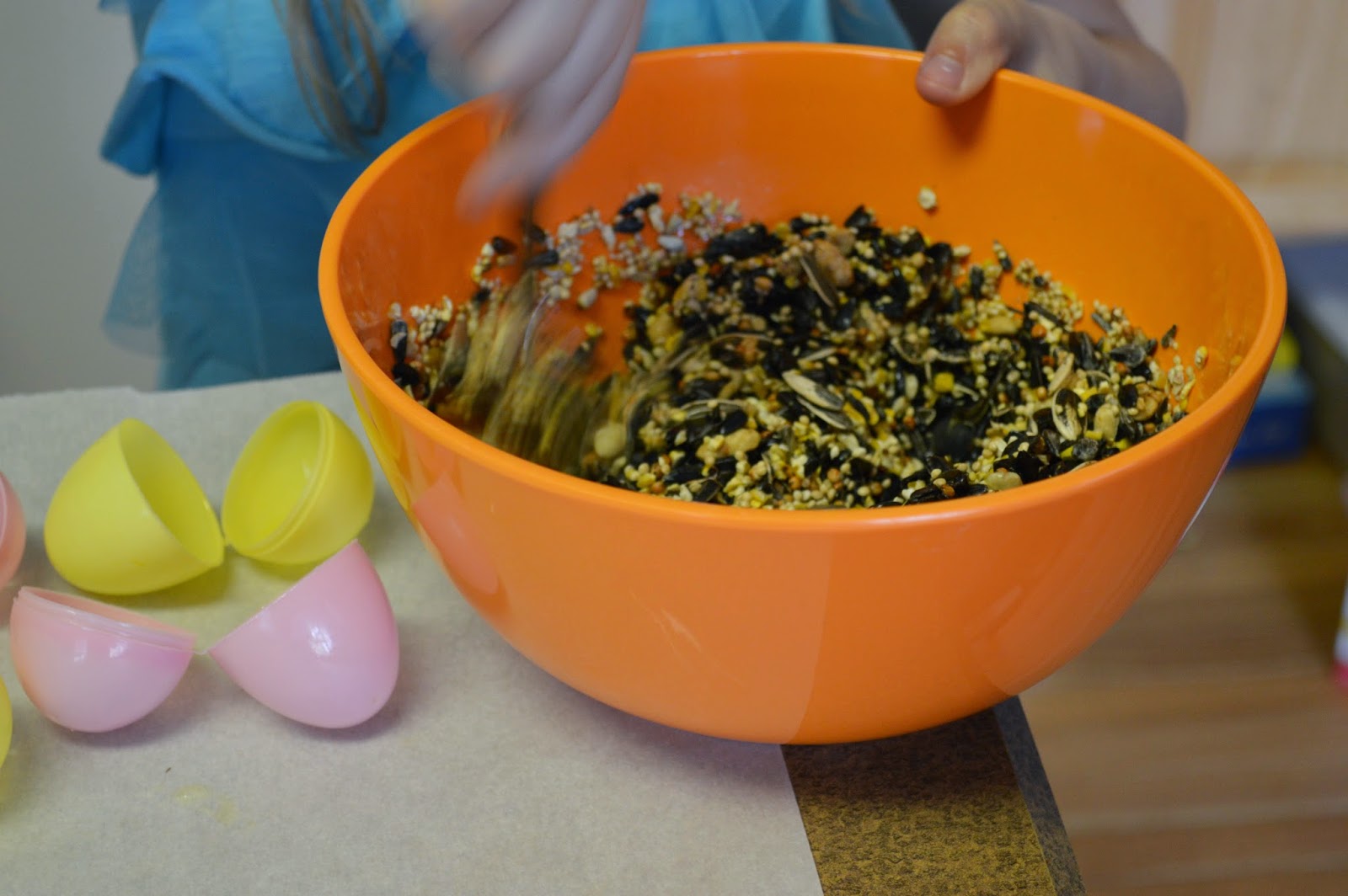 Once it was all mixed, they spooned it into their eggs. 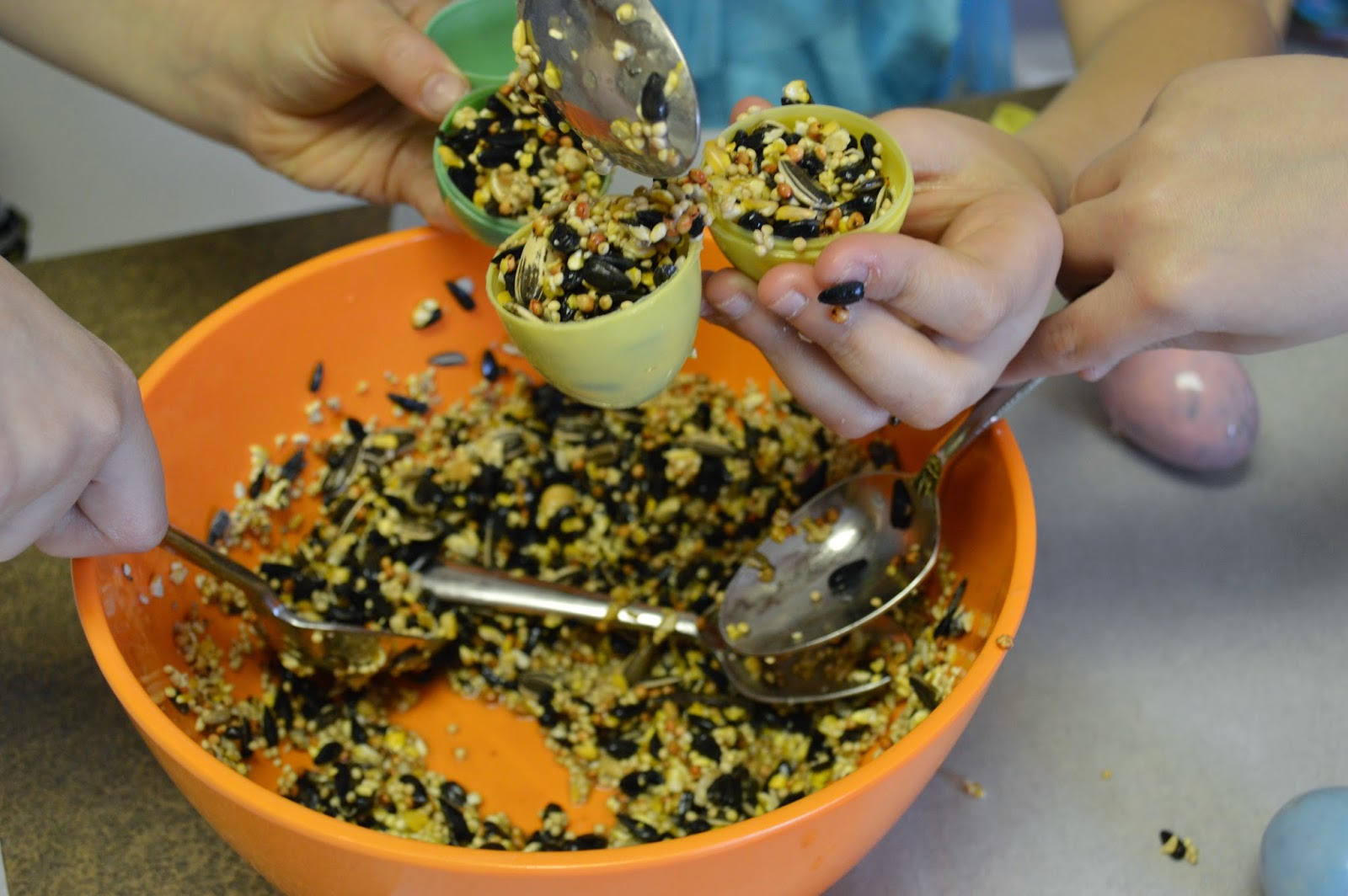 It took some trial and error to find the right amount to fill them enough without the eggs being too full to close.  We also found that some of the eggs had waaaaaay too much cooking spray, and were almost too slippery to handle. 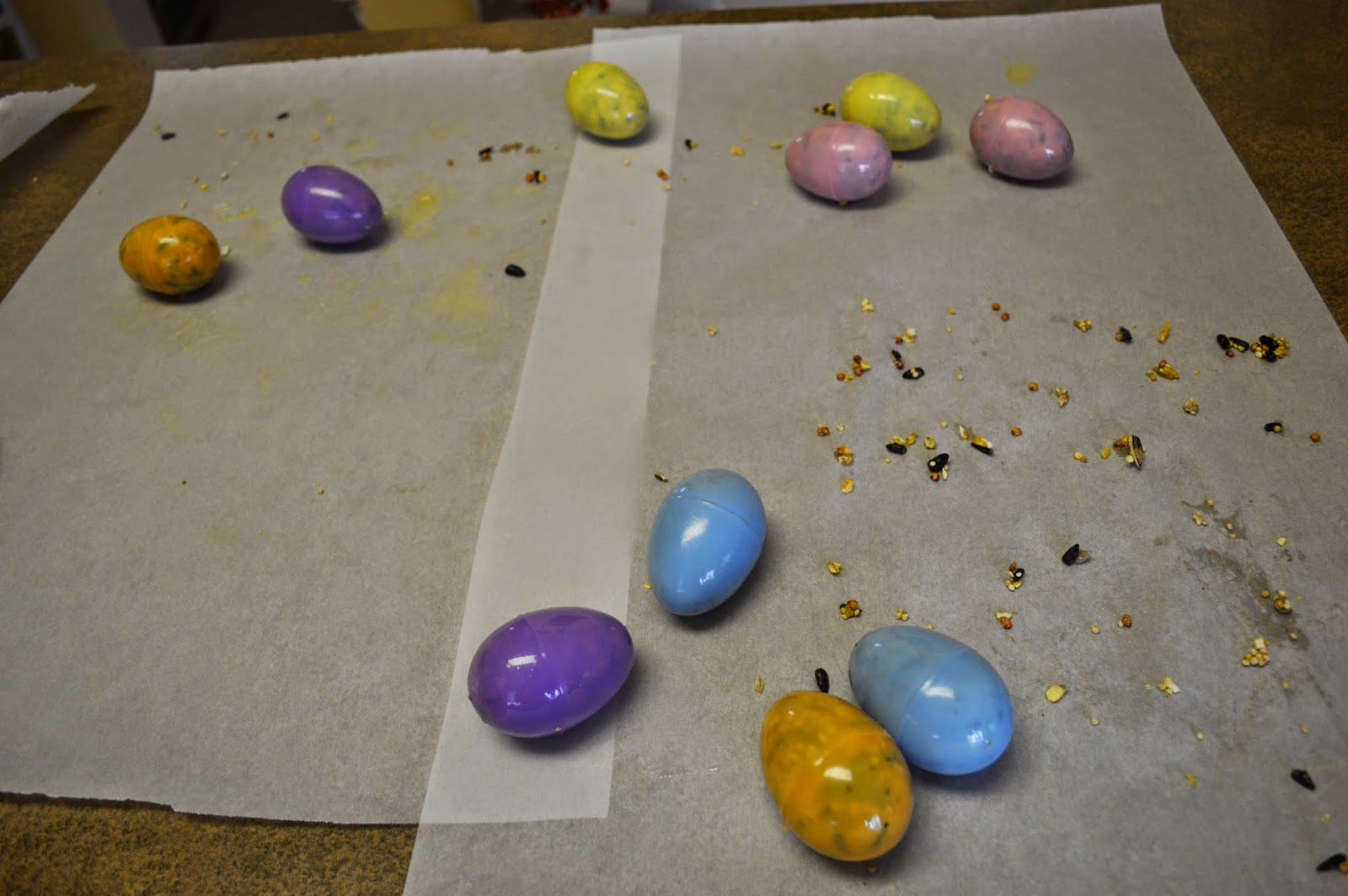 We put the eggs aside to set overnight. 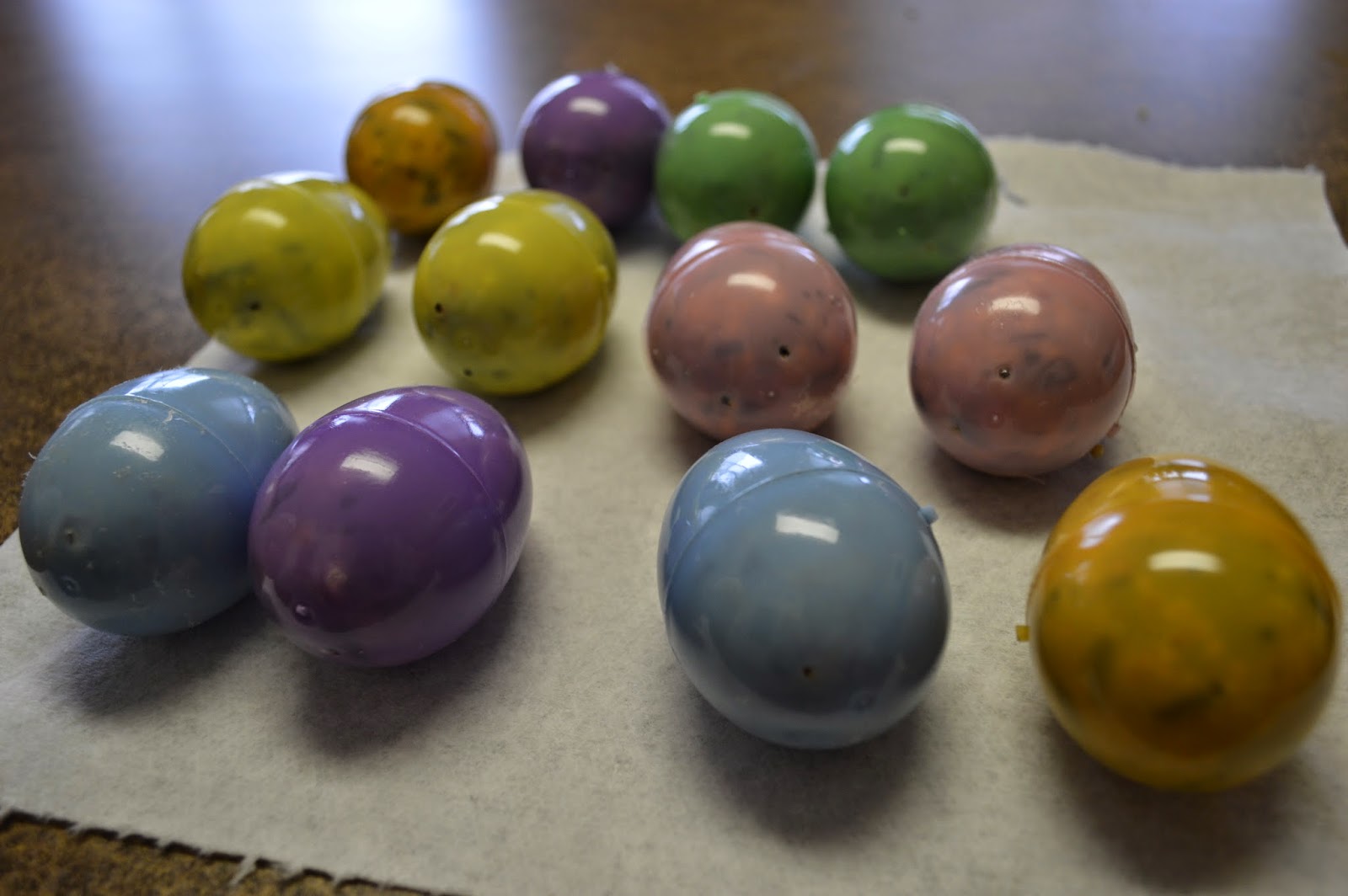 (We are not what you would call an ultra-patient family, by nature, so we snuck a peek about an hour later and found that they had already set up well.) 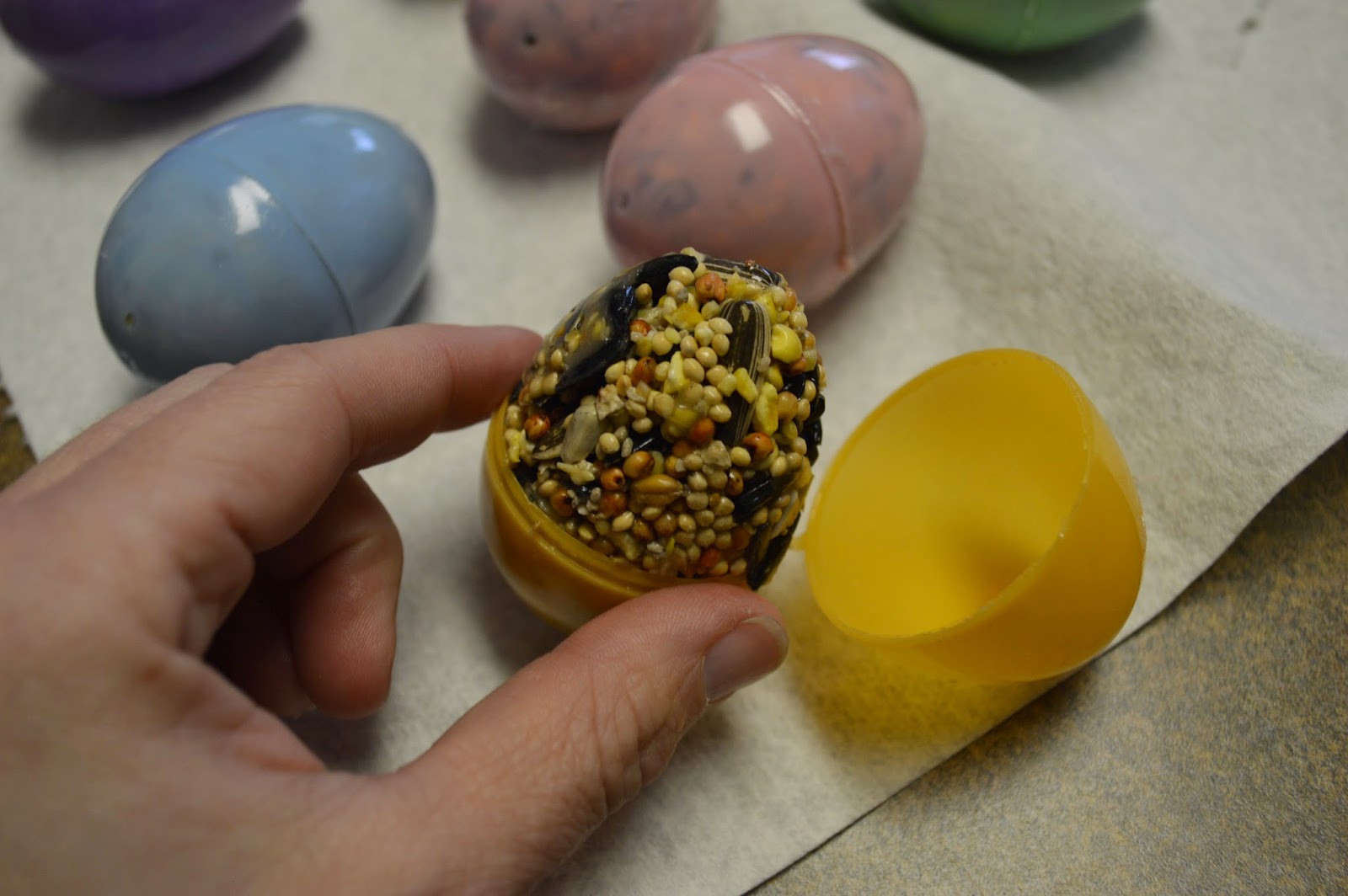 Figuring that the longer they were left to set, the firmer they would be, we put them back into their shells for the rest of the night. 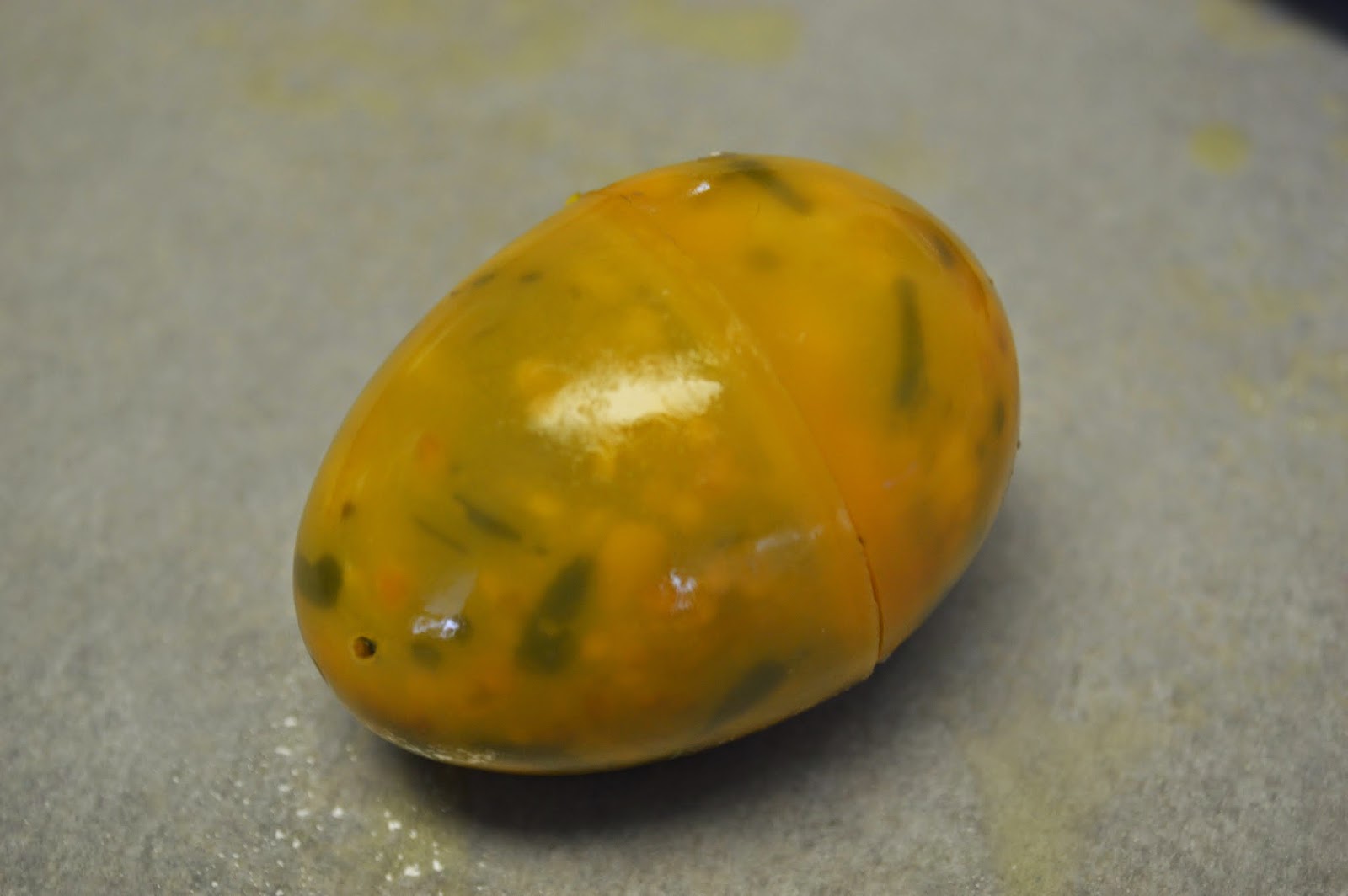 In the morning, we'll have some nice Easter treats for the wild creatures in our yard, and the kids can have fun hiding the eggs for a different kind of egg hunt!  We're having extended family over for Easter dinner, and I'm thinking this will be a great project to do with the seven cousins.  I think all the kids (who range in age from 5 to 11) will enjoy this one.  It's quick and easy, and it gives them something to take home that isn't sugar. 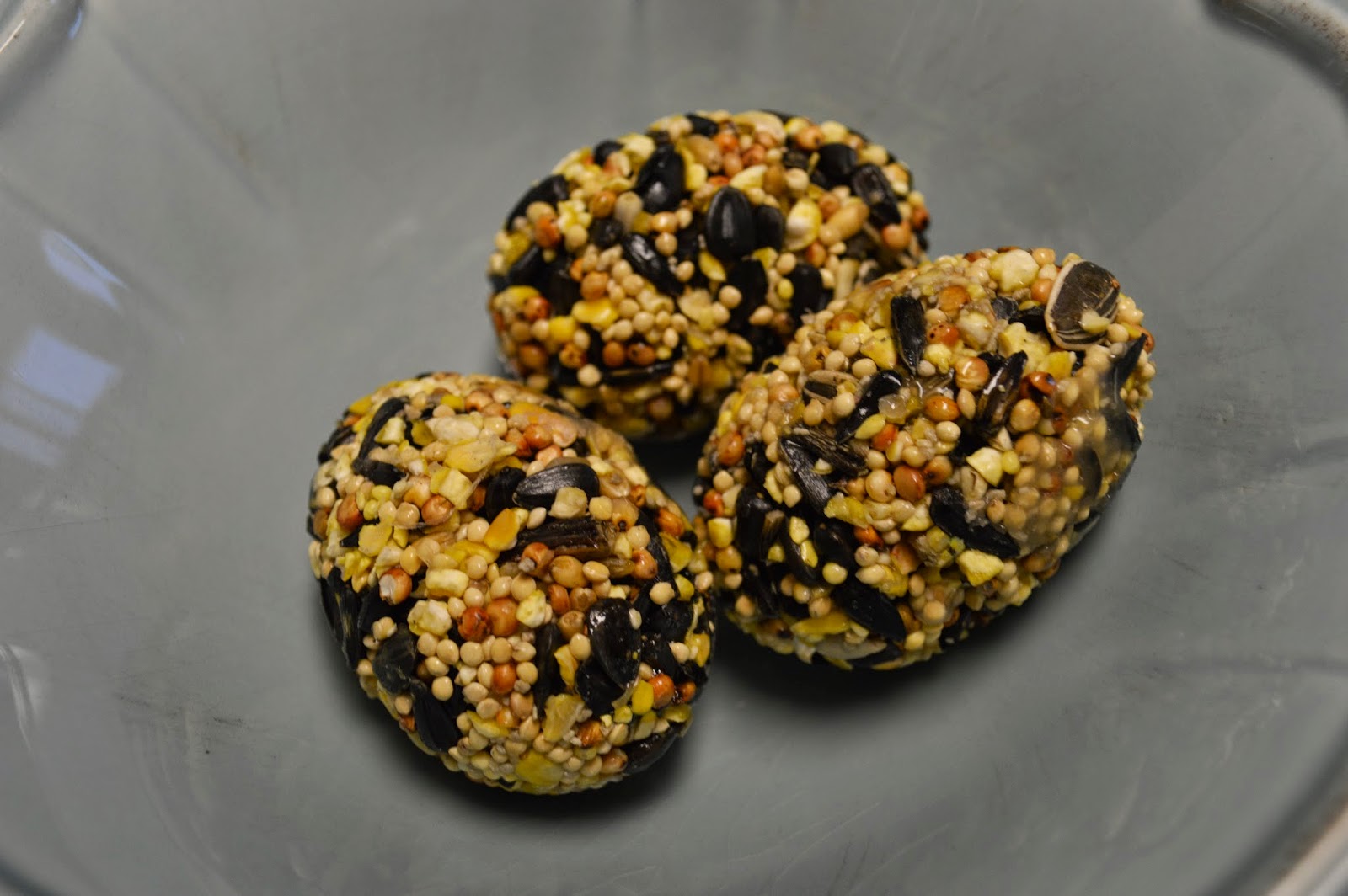 Except that, honestly, I'm still a little perturbed about birds eating eggs... 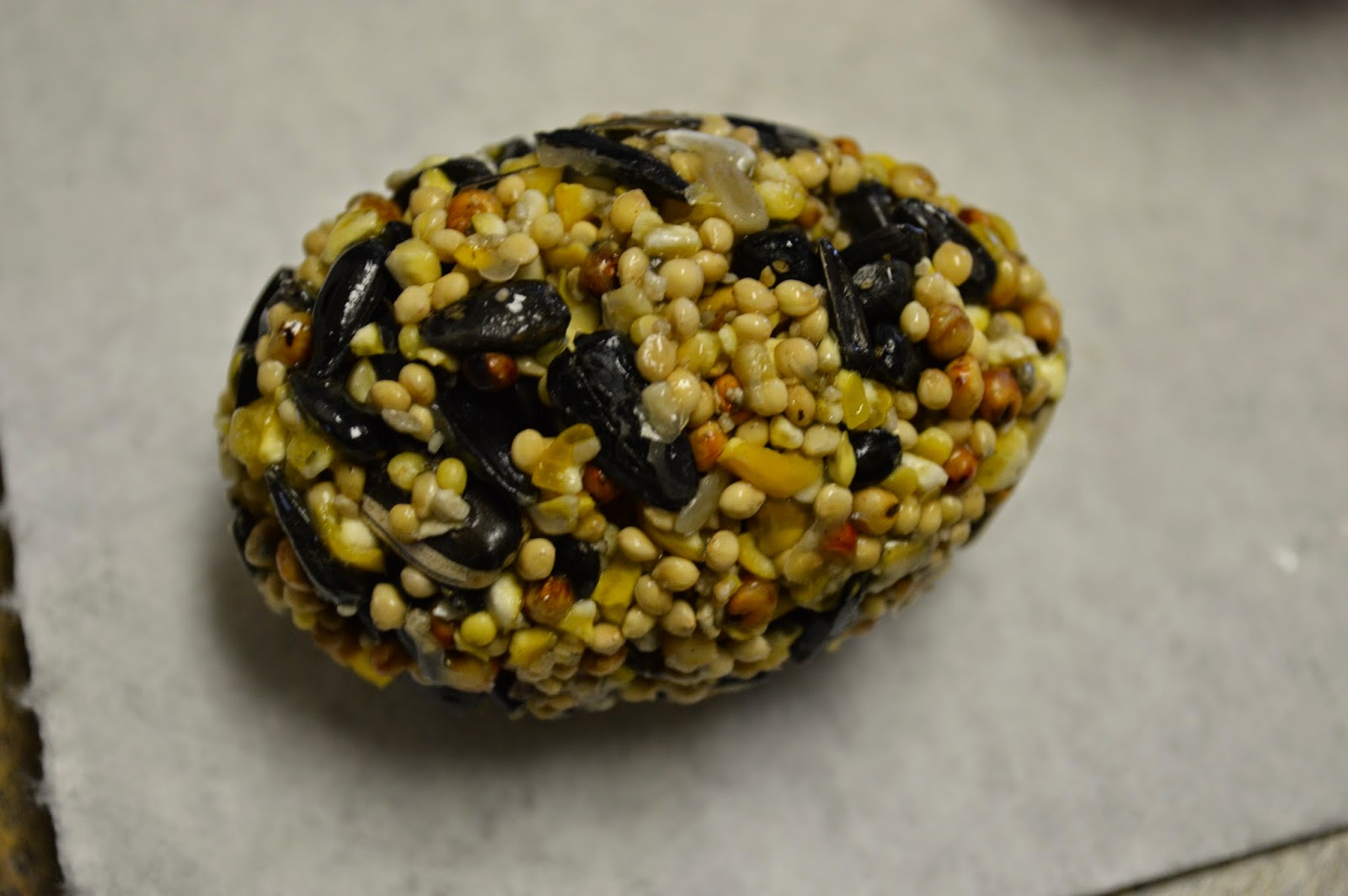