I am all about nuts lately.  I know, ha ha, "nuts", but at any given moment these days, my kitchen smells like one of those irresistible vendor stands with cones of deliciousness wafting their siren song as you walk past.  I've been really hooked on this recipe for Lavender Rosemary and Cinnamon Spiced Nuts from Redpath Sugar.  It's great, and I've been bringing it to lots of friend and family gatherings.  This has lead to may, many mature jokes about my nuts, how delicious they are, how people can't stop putting my nuts in their mouth...basically, my nuts have been all over Facebook.

Anyhow, a lot of people have been asking me to put my nuts on my blog.

And making those lavender nuts is quick and easy enough.  And it is delicious beyond belief, for me, especially with pecans.  But it's also one of those recipes that makes my mind explode with the possibilities.  So I decided to go a different route with the same method, to show you all that there is unlimited potential with this one.

At first, I thought about using Rumchata, mainly because it's basically a buzzword these days.  But when I opened my liquor cabinet to pull out the Rumchata, my hand paused as the bottle of Malibu silently diverted my attention with its sunset and palm trees...the essence of vacations and summers.  Which is exactly the remedy for this long winter and rainy spring. 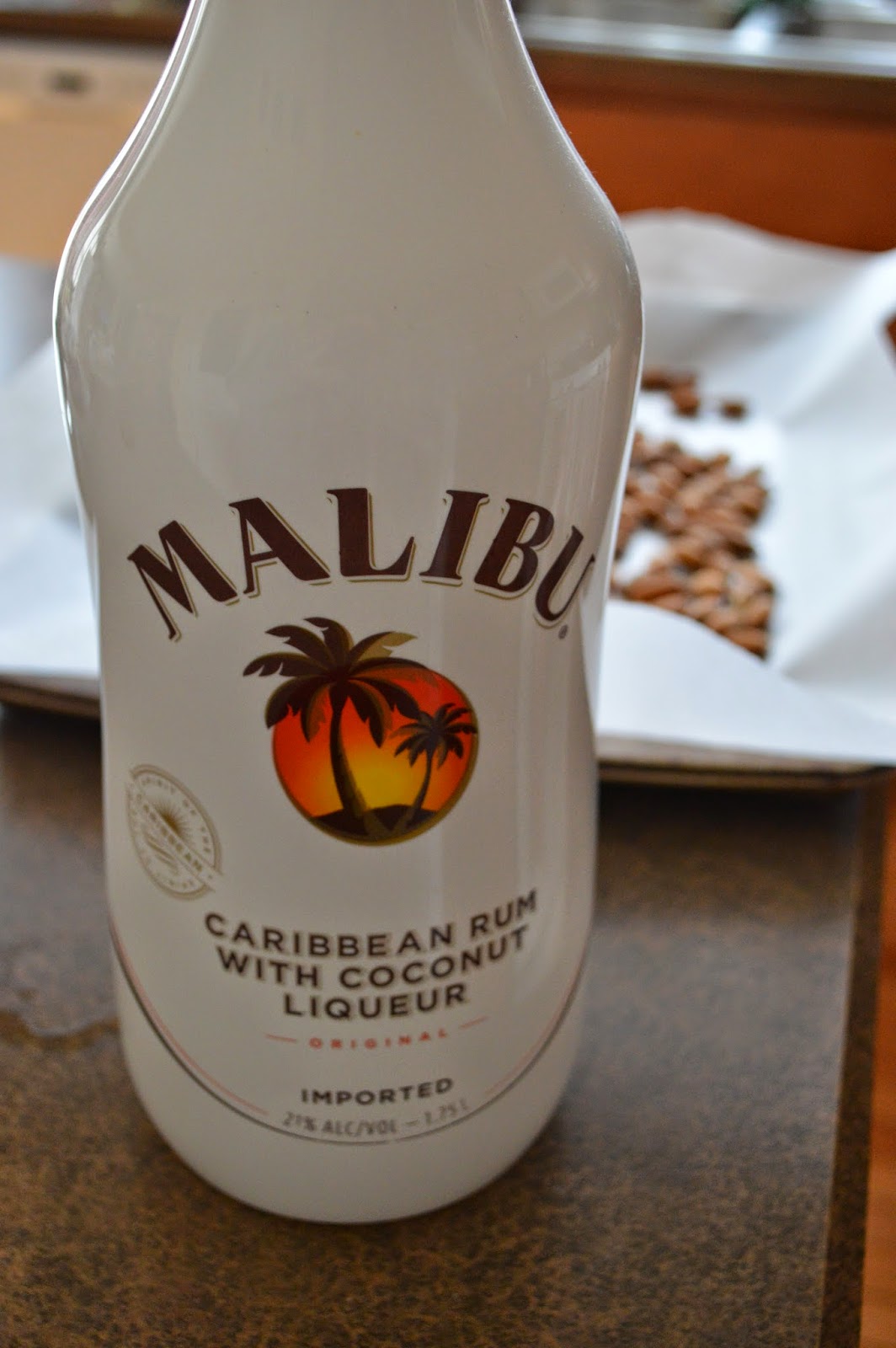 So, I give you: Malibu Coconut Almonds. 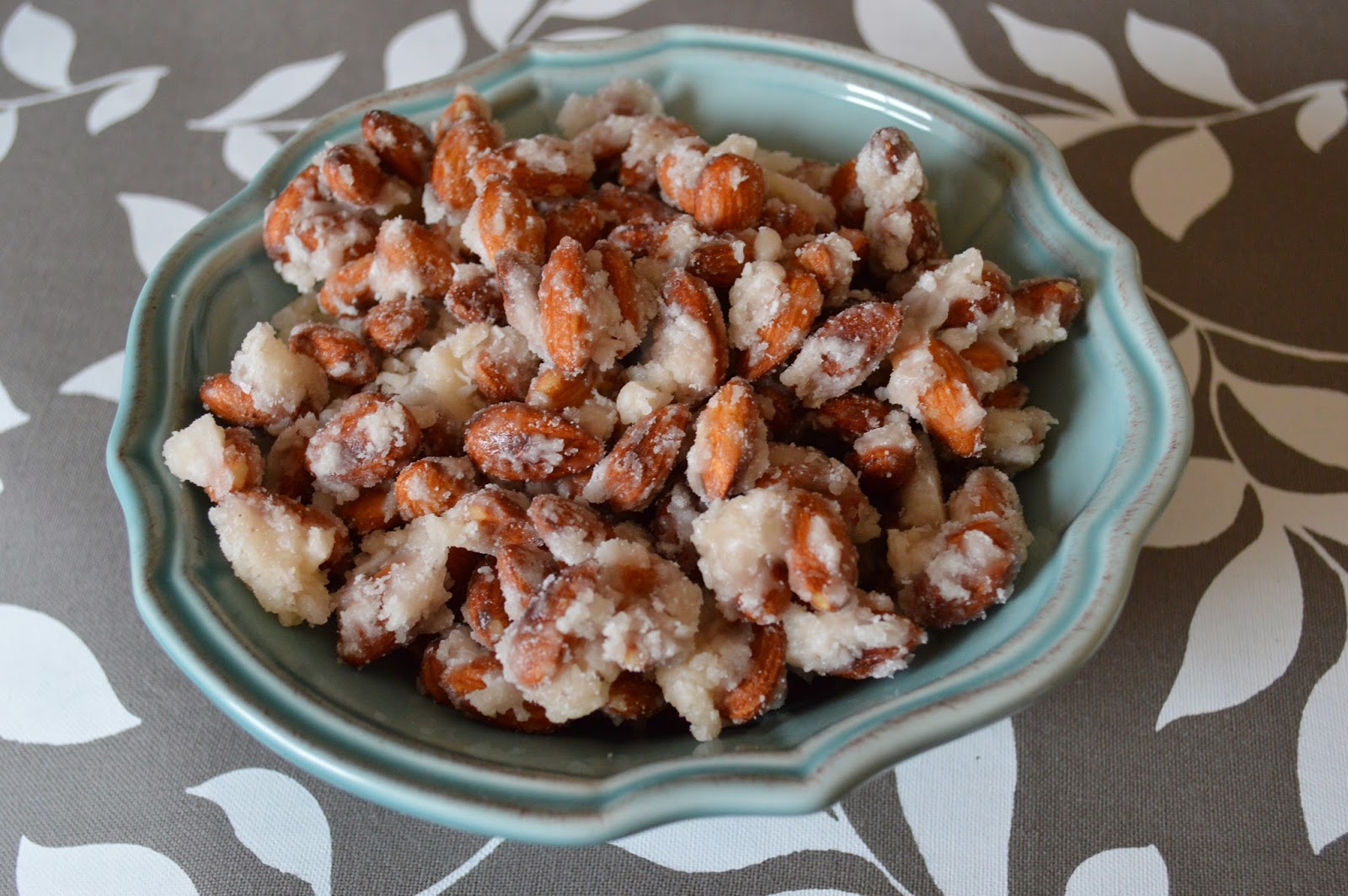 Don't get me wrong, the Rumchata ones are going to be delicious too, and you can use any nuts you want in any version of this.  But this one is amazing.  Unless you hate coconut, in which case, you can skip this version and go with flavors you like more.

So, first, heat your over to 350 degrees.  Cover a baking sheet with parchment and then spread 2 cups of almonds (or other nuts) on it.  Pop it in the oven to bake for about 8 minutes, until they start to smell toasted.  Or, as my son noticed, "like popcorn". 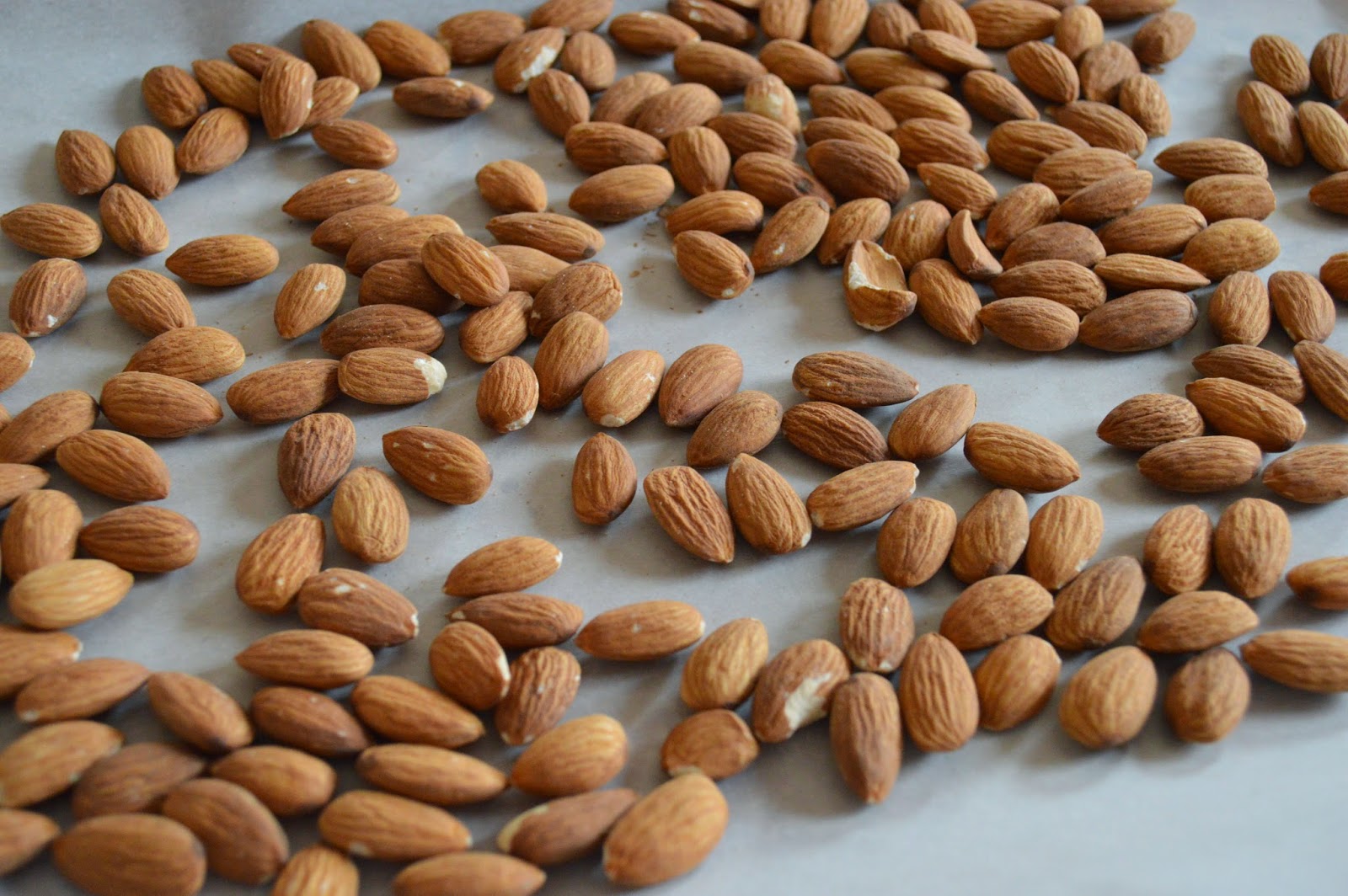 While the nuts are roasting, set to making the glaze.  I used a cup of sugar and 1/3 cup of Malibu.  As long as you keep those ratios, you can make whatever flavor you'd like.  Sub in water for the Malibu and let mixed in spices (we'll get there in a minute) do the talking.  Or sub in the Rumchata.  The only thing I'm not sure would work would be fruit juices.  But hey, can you imagine what wine glazed nuts could be like??? 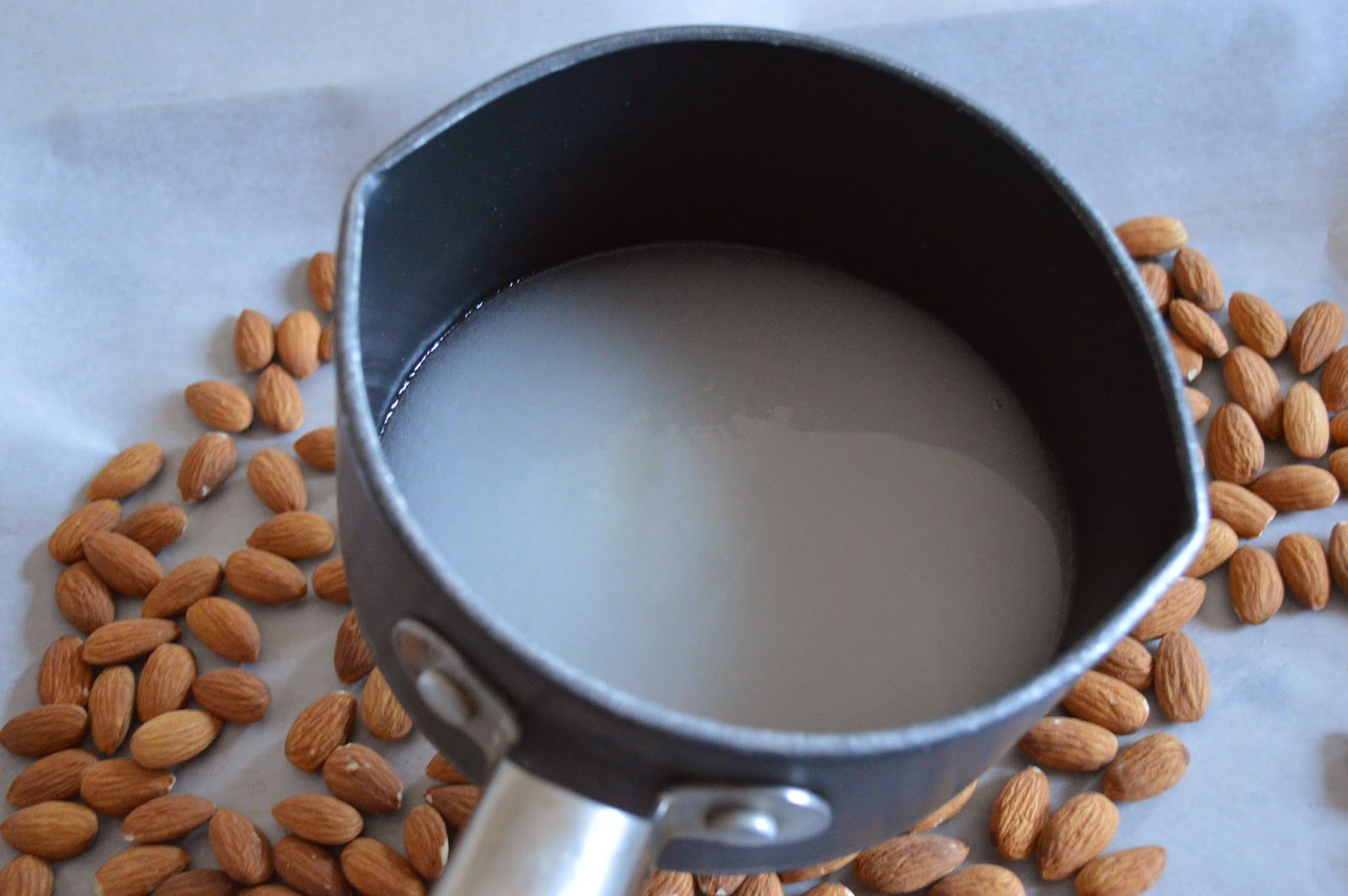 Put the sugar and the Malibu in a small saucepan, and without stirring, bring it to a boil.  Put in a candy thermometer (Sorry, but you really kind of do need one for this.  Worth the small investment, I promise!) and let it simmer until it reaches 238 degrees Fahrenheit. 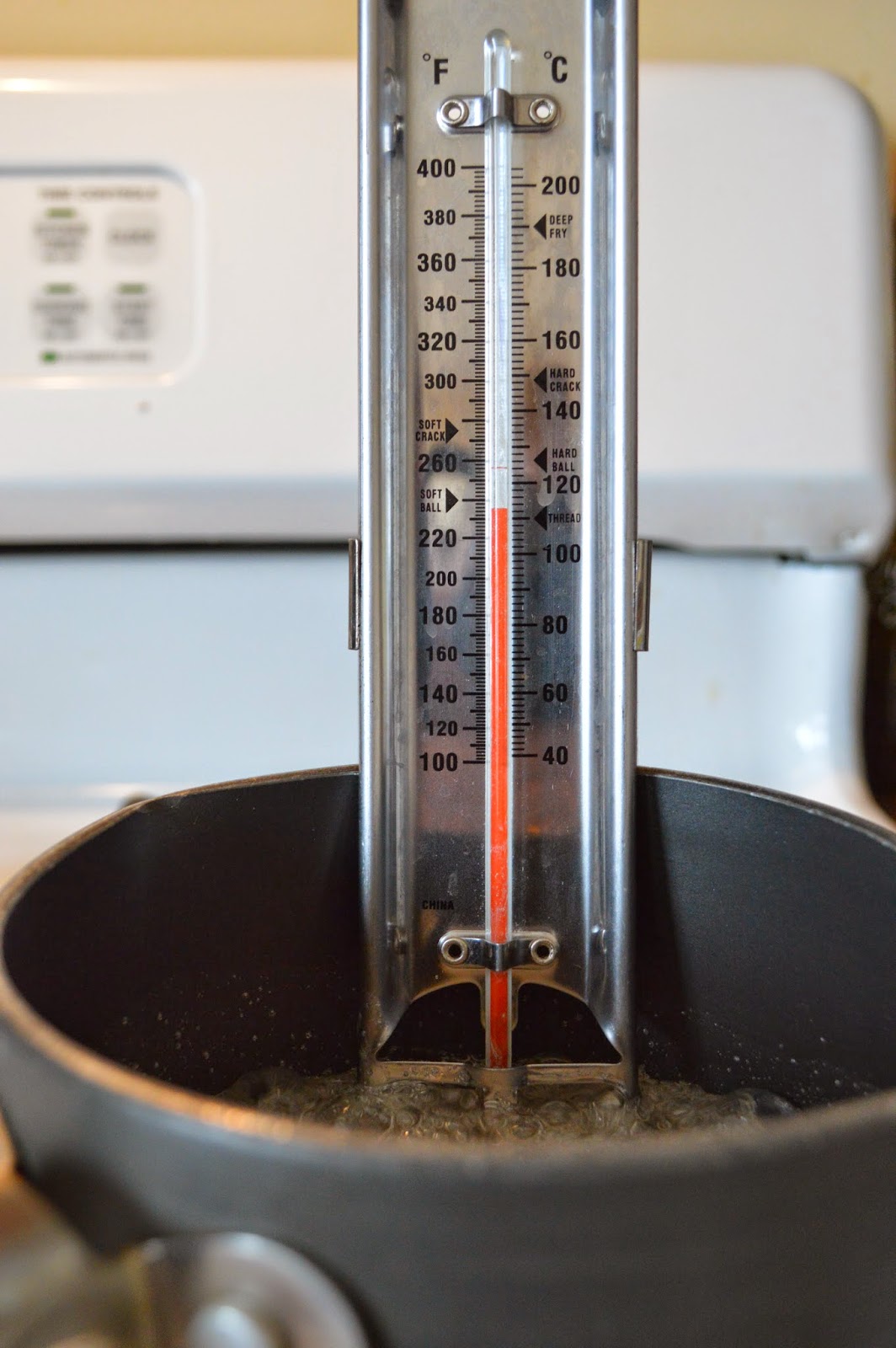 While that's simmering, get about a half cup of dried coconut flakes ready.  Unsweetened, because the sugar mixture is sweet enough on its own.  We get ours in the bulk section of the health food store.  If you want, you could chop or grind it up a bit, to have a smoother coating, but I like my food rustic...aka simple is better. 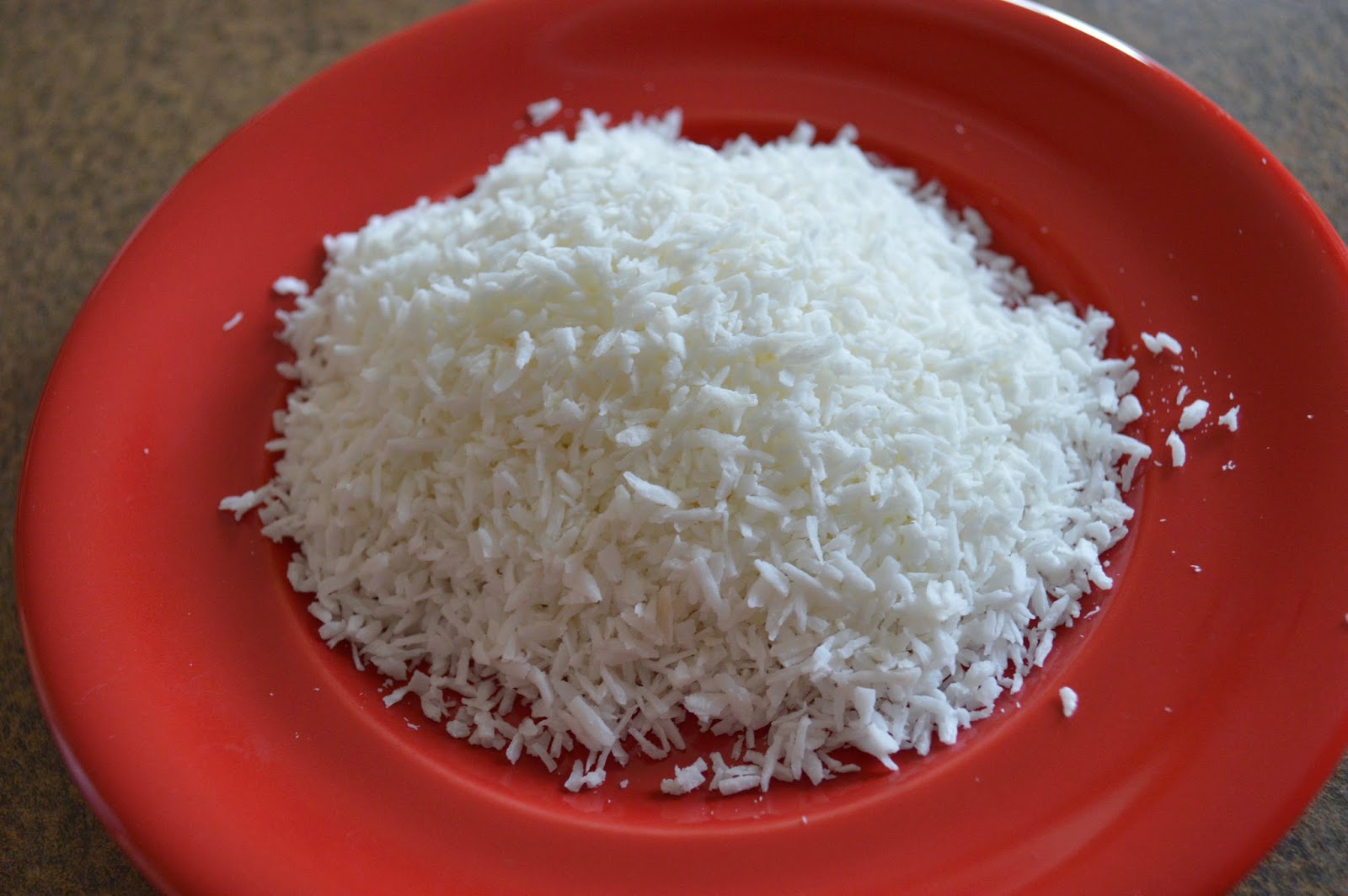 Also, take the nuts out of the oven when they're done and set them aside, leaving them on the pan.

Once you hit that 238 degrees, remove the sugar syrup from the heat and mix in the coconut flakes.  This is another step that you can choose your own adventure.  Curried nuts?  Yum.  Traditional cinnamon?  Can't go wrong there.  Lemon rind and thyme?  Beyond fantastic.  Today though, it's coconut. 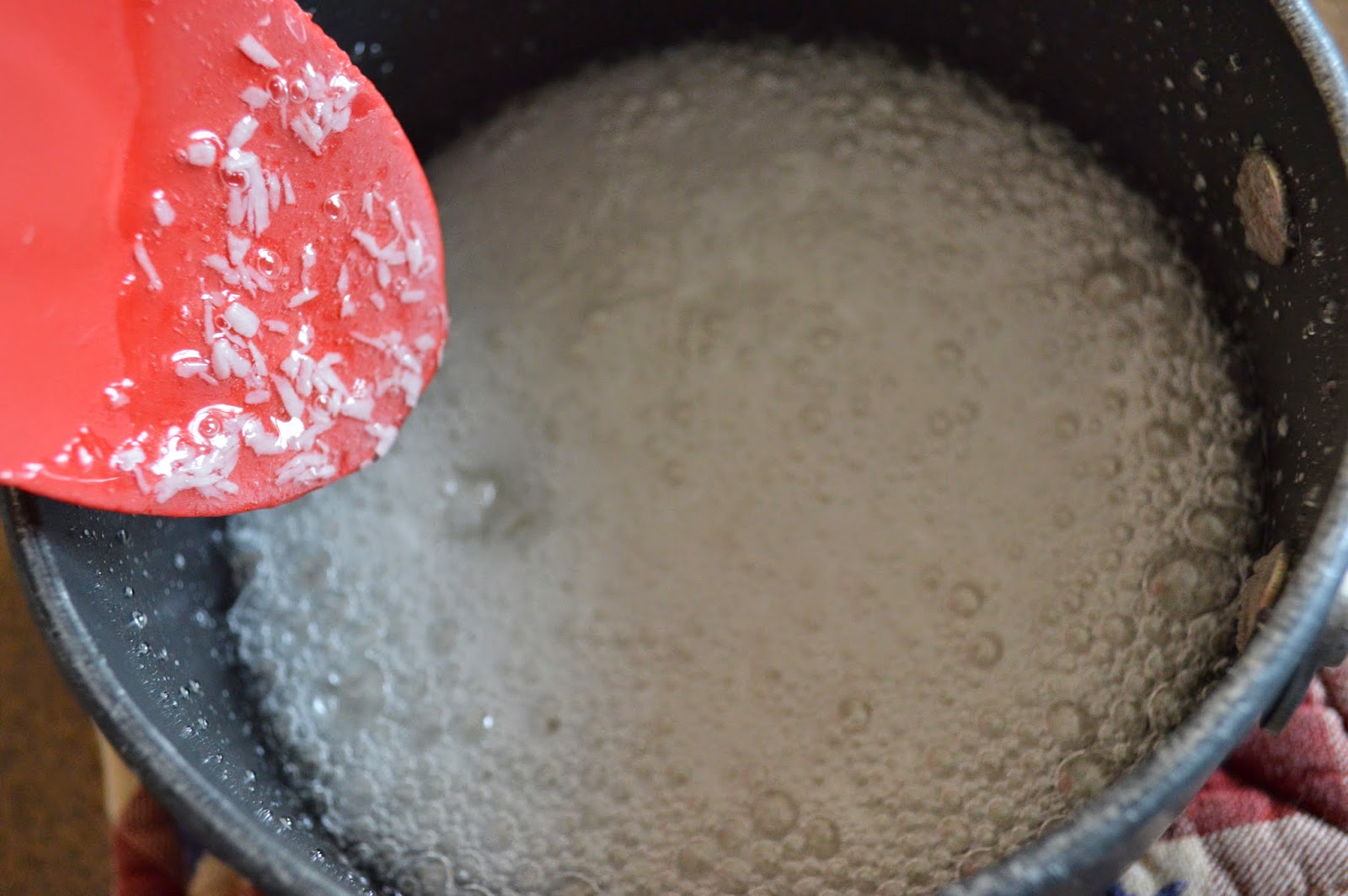 Quickly pour the syrup over the nuts. Give them a good stir, and keep stirring. 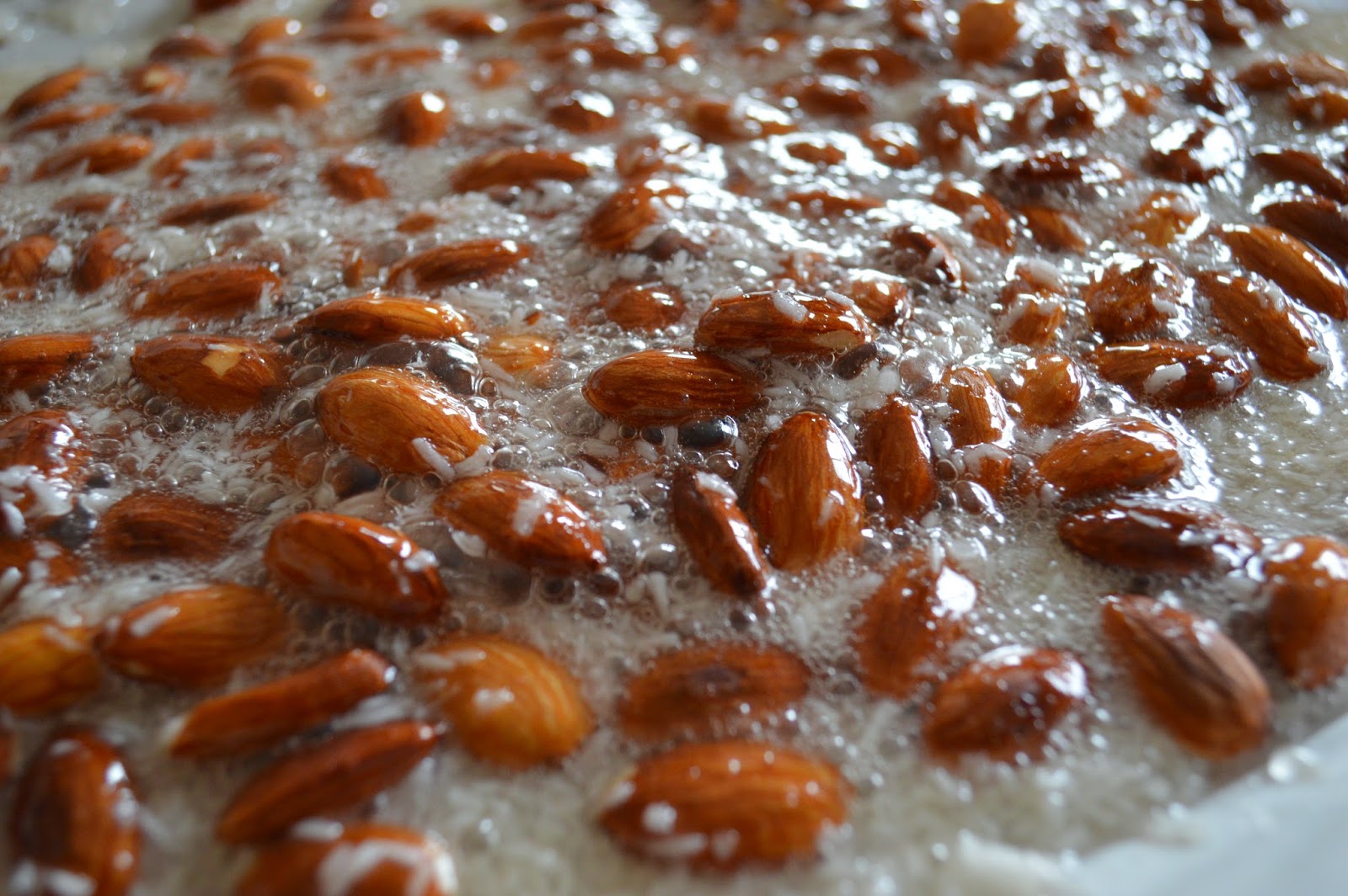 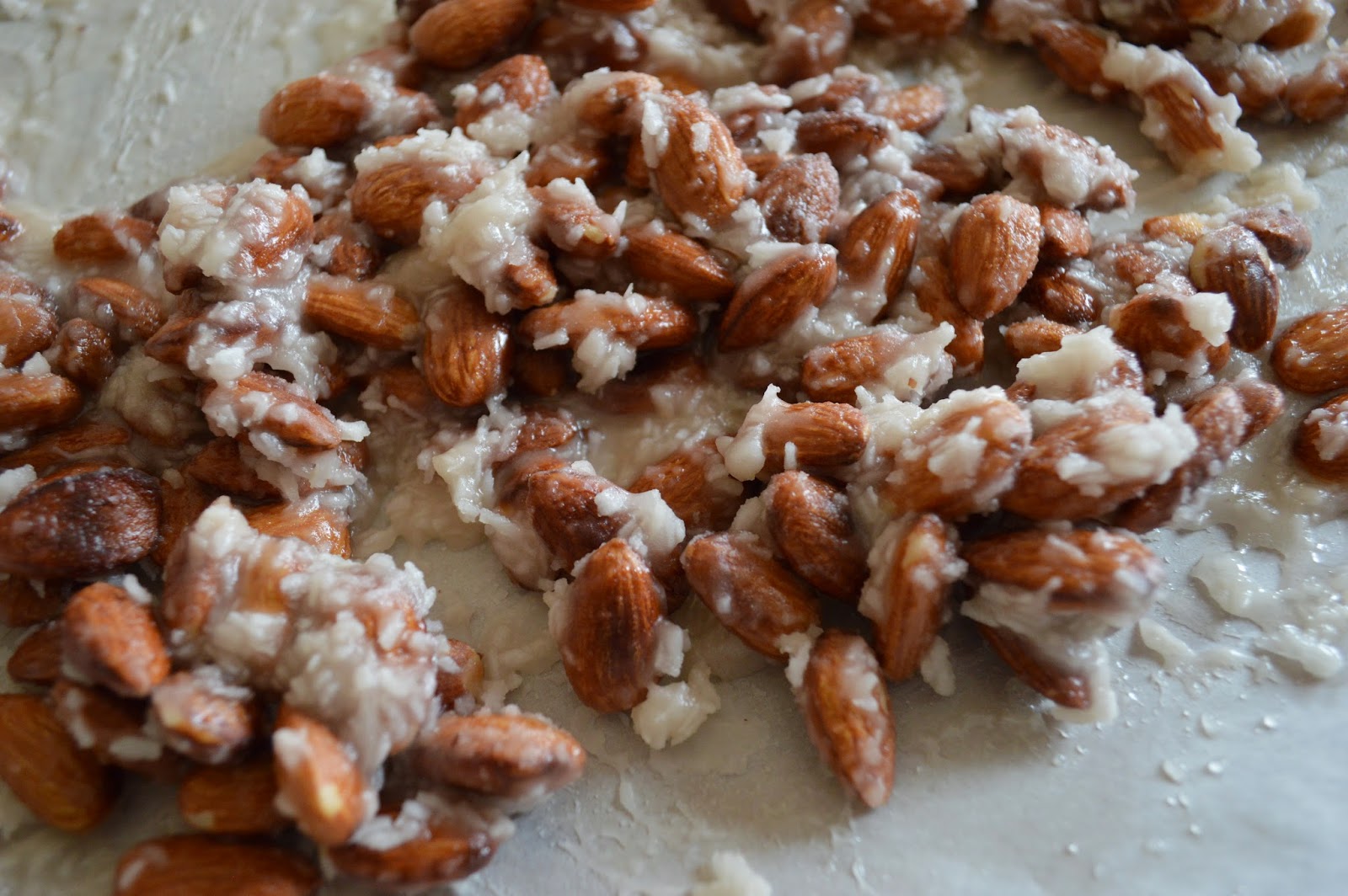 Until the syrup is cooling and starting to solidify.  You could just let it set, but then you end up with nuts in a weird candy lake, and it's just not as easy to eat, or as pretty to look at. 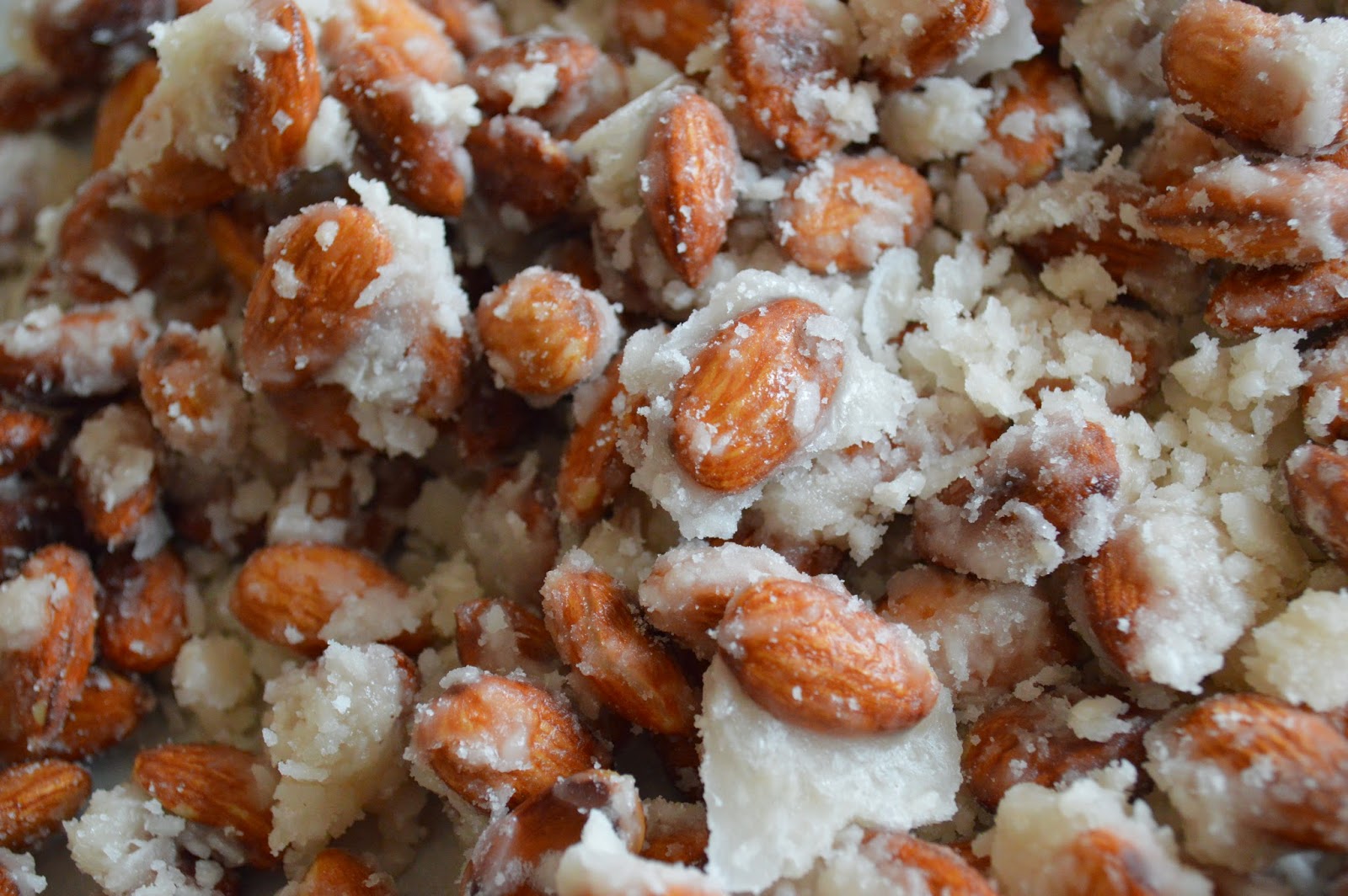 Let it cool completely, if you can resist.  Then, dig in and enjoy.  Share the nuts with people you love.

I'm really glad my husband was at work when I made these, because I have a feeling he will have a hard time staying away from these! 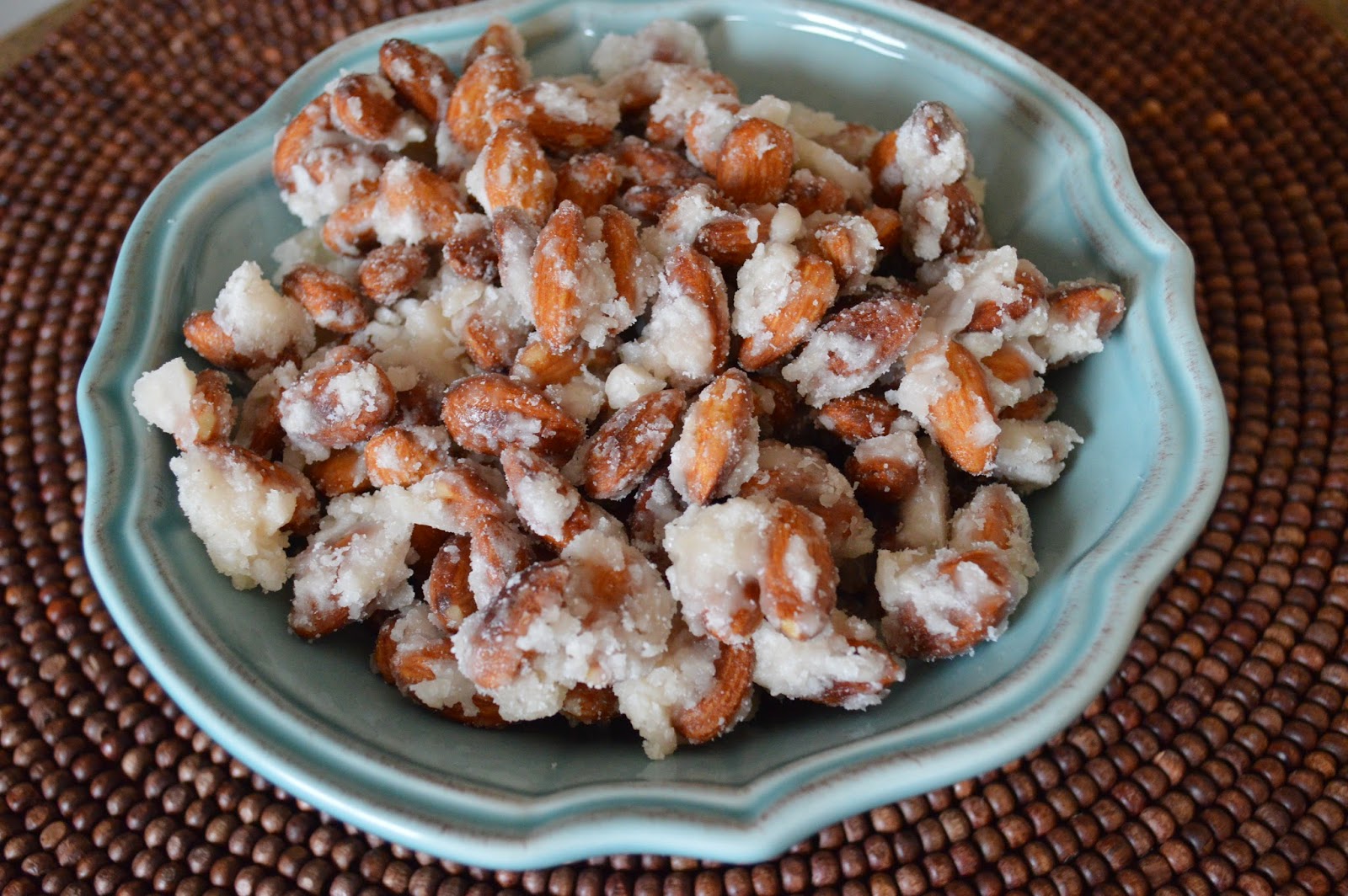