Today, my hubby and I did something that I've been wanting to do for a long time.  We went to Koval Distillery in downtown Chicago for a tour and tasting.  We had been familiar with Koval's great whiskeys and liqueurs for a couple of years now, after finding them at Green City Market; a little booth with a policeman overseeing the sale of beautiful bottles filled with amber-colored concoctions tucked among the sea of farmers selling fresh produce and artisan foodies marketing their wares.  I was intrigued by their story.  The first distillery in Chicago since Prohibition, certified organic, kosher, and dedicated to their craft. 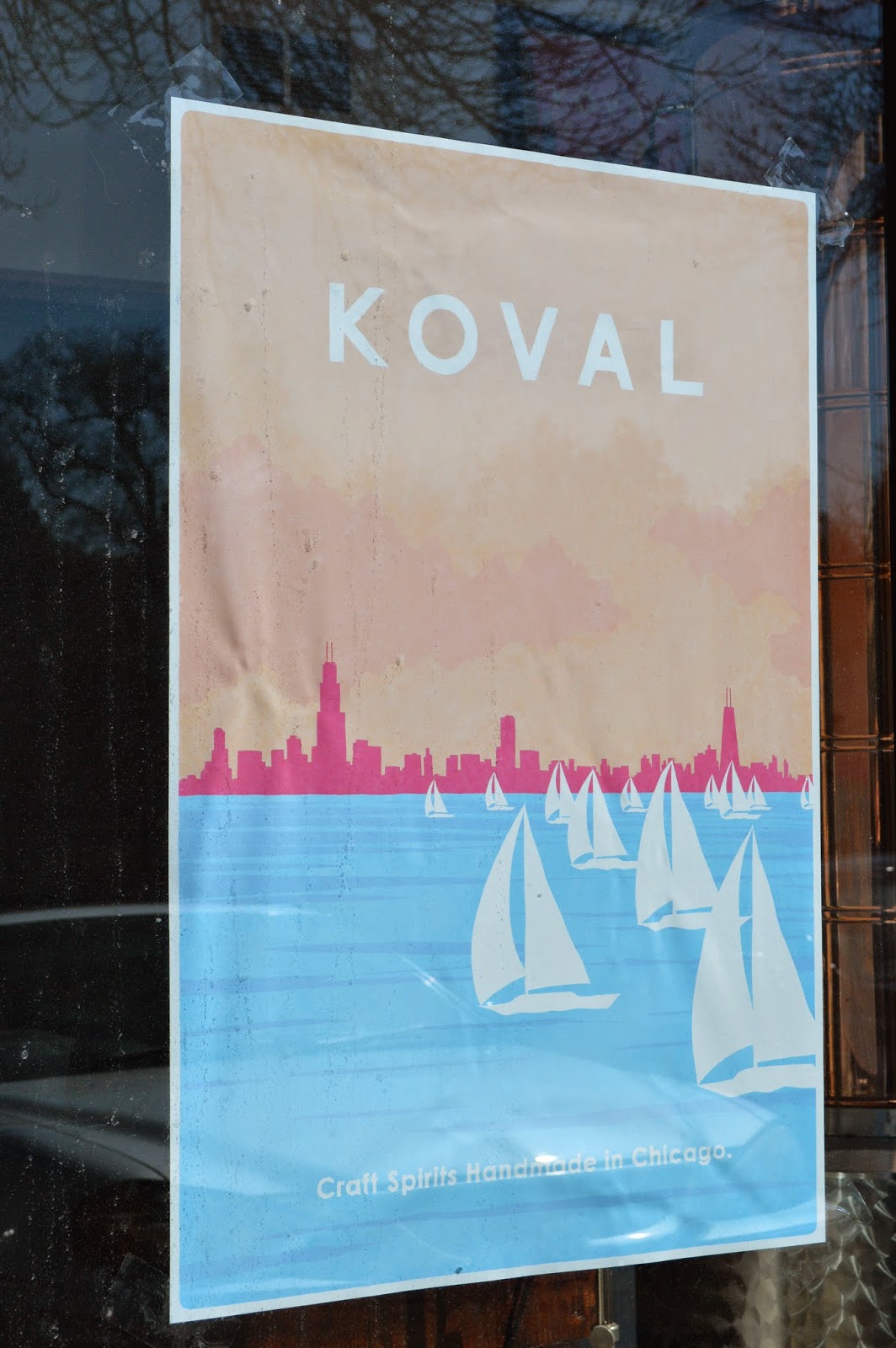 Now, I'm not much of a whiskey girl, but the hubs is a huge fan.  That said, I am a fan of learning and tasting, of slow food, and of local businesses.  Also, when we visited their booth at GCM, we picked up a bottle of their Single Barrel Rye Whiskey and a smaller bottle of the Chrysanthemum & Honey liqueur, and both were delicious.  The Rye was so smooth that I not only could tolerate it, but I actually enjoyed it.  Whiskey without the burn...a girl could get in trouble there! 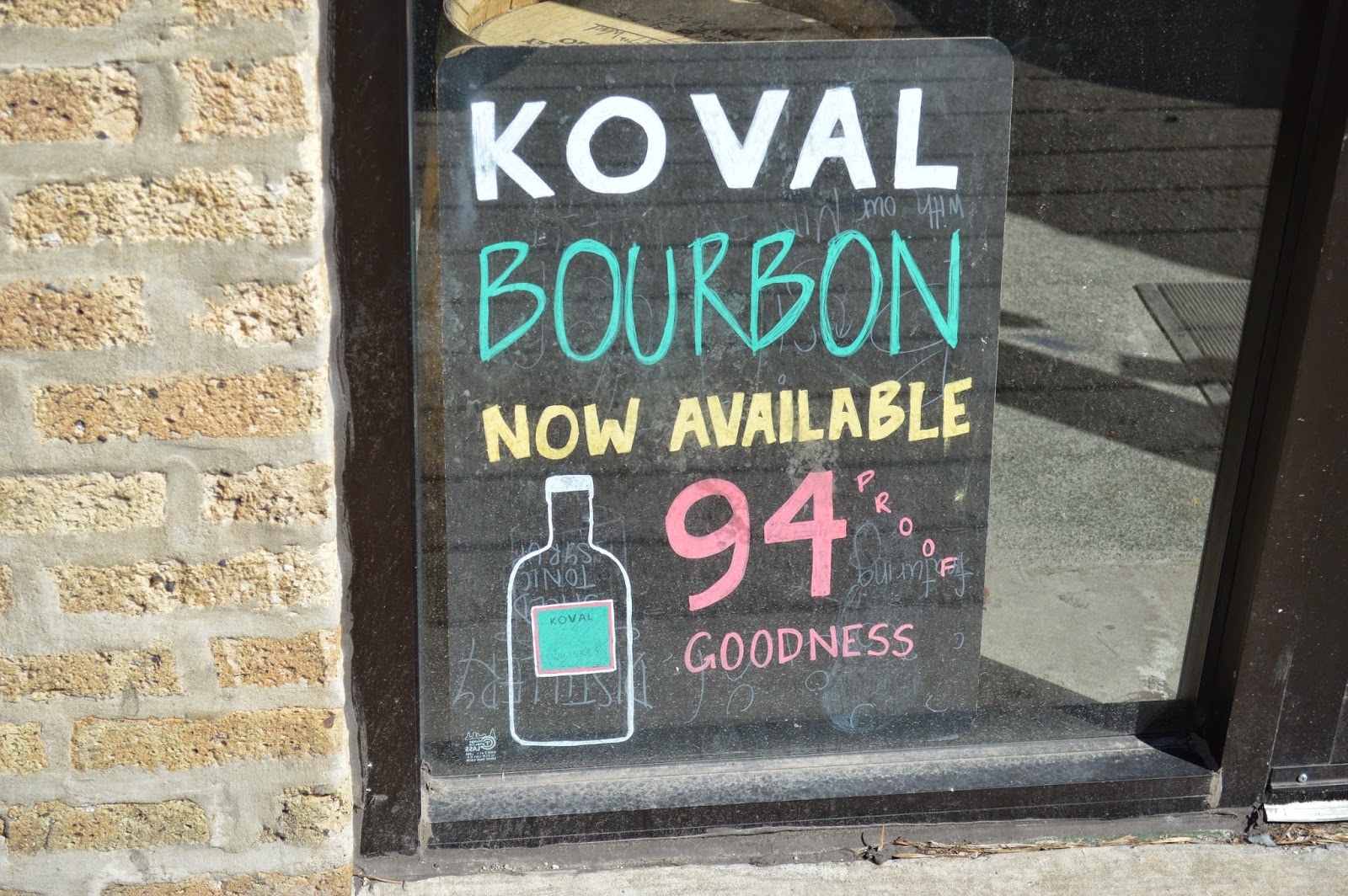 So when I stumbled across one of those social group deals for a discounted distillery tour and tasting at Koval, I jumped at the opportunity.  We have a tendency (and I don't think we're alone in this) to say that we're going to do cool things, but never really get around to them, and having a paid voucher with an expiration date makes it much more likely that we're actually going to do whatever it is.  Koval it was.  Reservations were made.  We dropped the kids off with their Nana and Papa, and were on our way downtown. 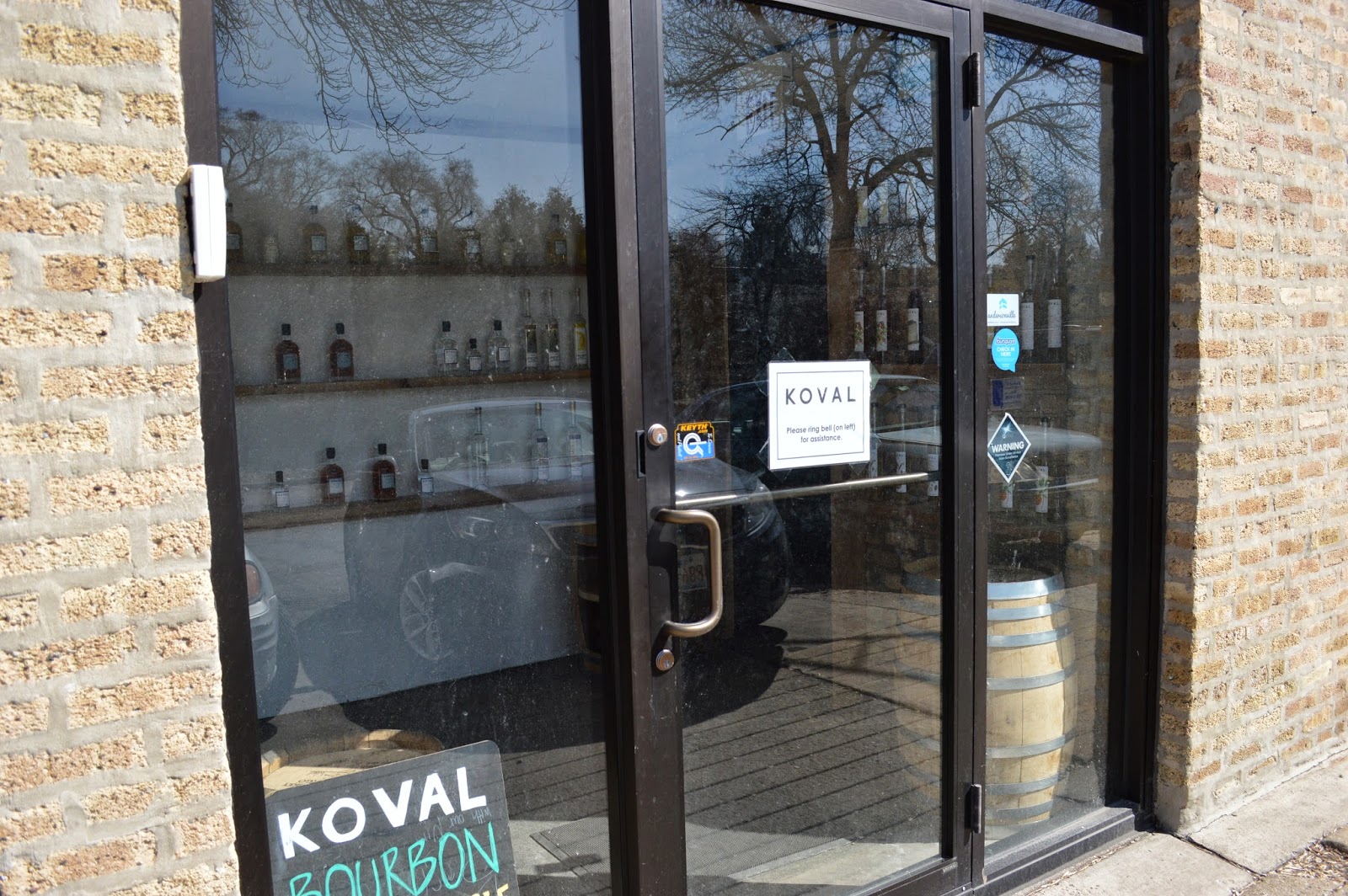 Koval is located on the north side of Chicago, in Andersonville, known as a predominately Swedish area.  These days, it's very trendy and ethnically diverse.  A nice neighborhood to explore.  Koval is a little off the beaten path, tucked into the outskirts of a more residential section.  The building where we took the tour was their original location, and they have more recently expanded into another building down the street as well, to accommodate a new, larger still. 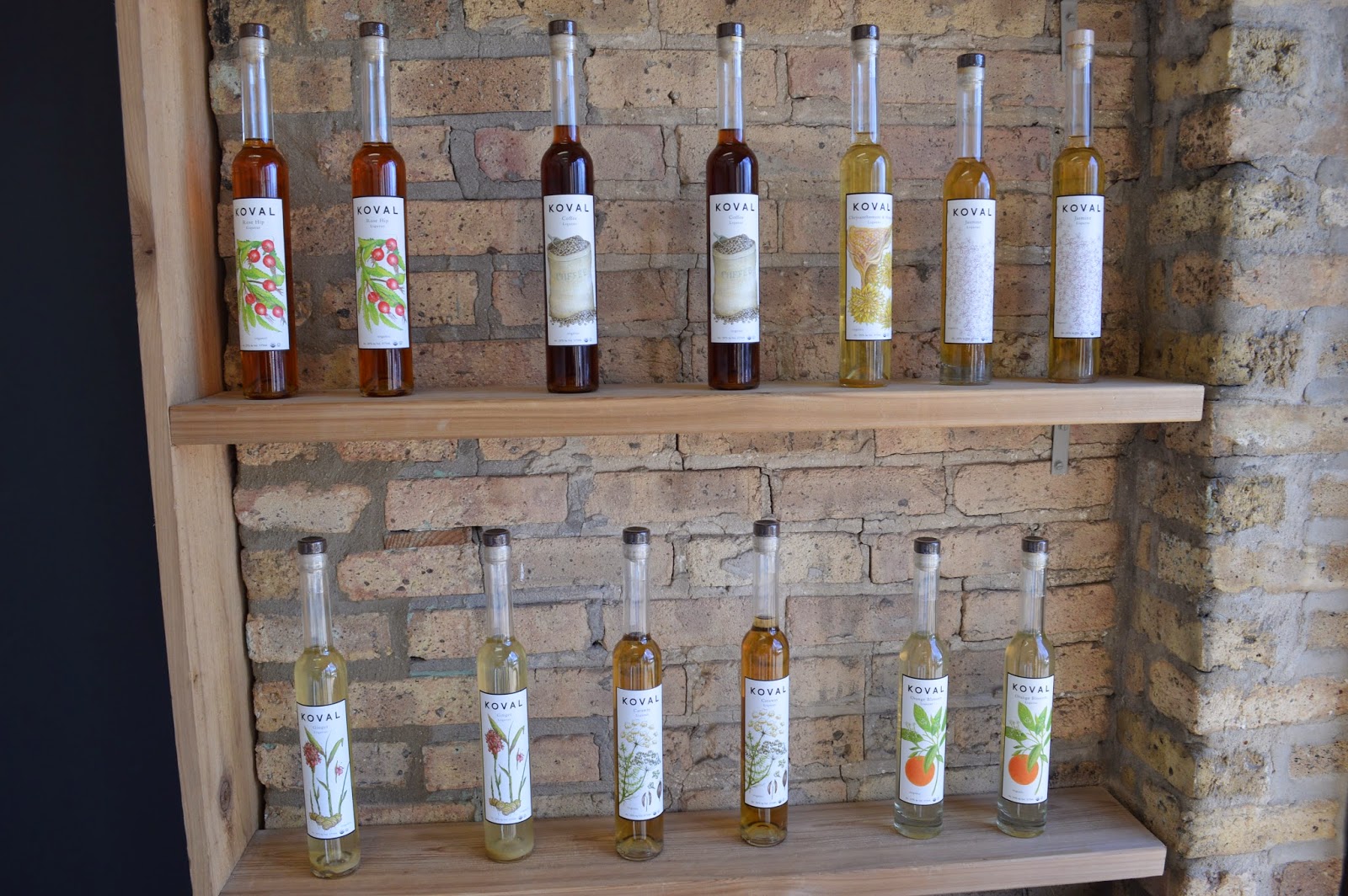 When you first walk in, you walk into the shop part of the building, a room with wall lined with shallow shelves featuring glistening bottles of Koval's products.  They also sell t-shirts, and a few scented candles that smell like wonderful things like ginger and whiskey.  Before our tour, we were allowed to wander the premises, checking out everything from the still to the wall lined with barrels of aging spirits.  Here and there there were plaques and medals, and framed articles, all hints at how acclaimed and respected the distillery is in both the local community and the distilling community. 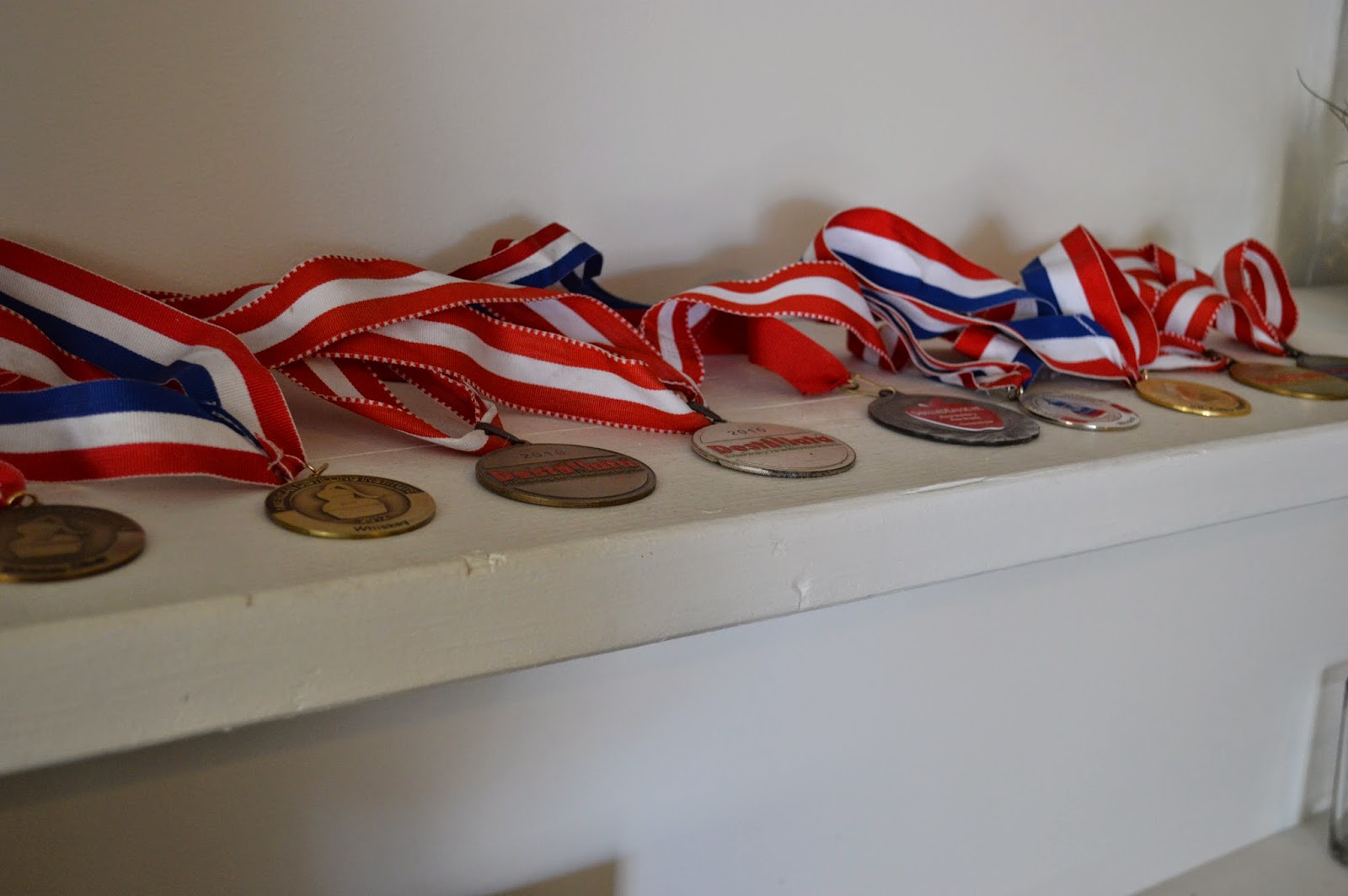 Koval, we learned, means "black sheep" in Yiddish, and "blacksmith" in some European languages.  It is an homage to the founders' families and their backgrounds.  To me, it seemed more than fitting.  A company that doesn't run with the crowd, and are masters of their craft. 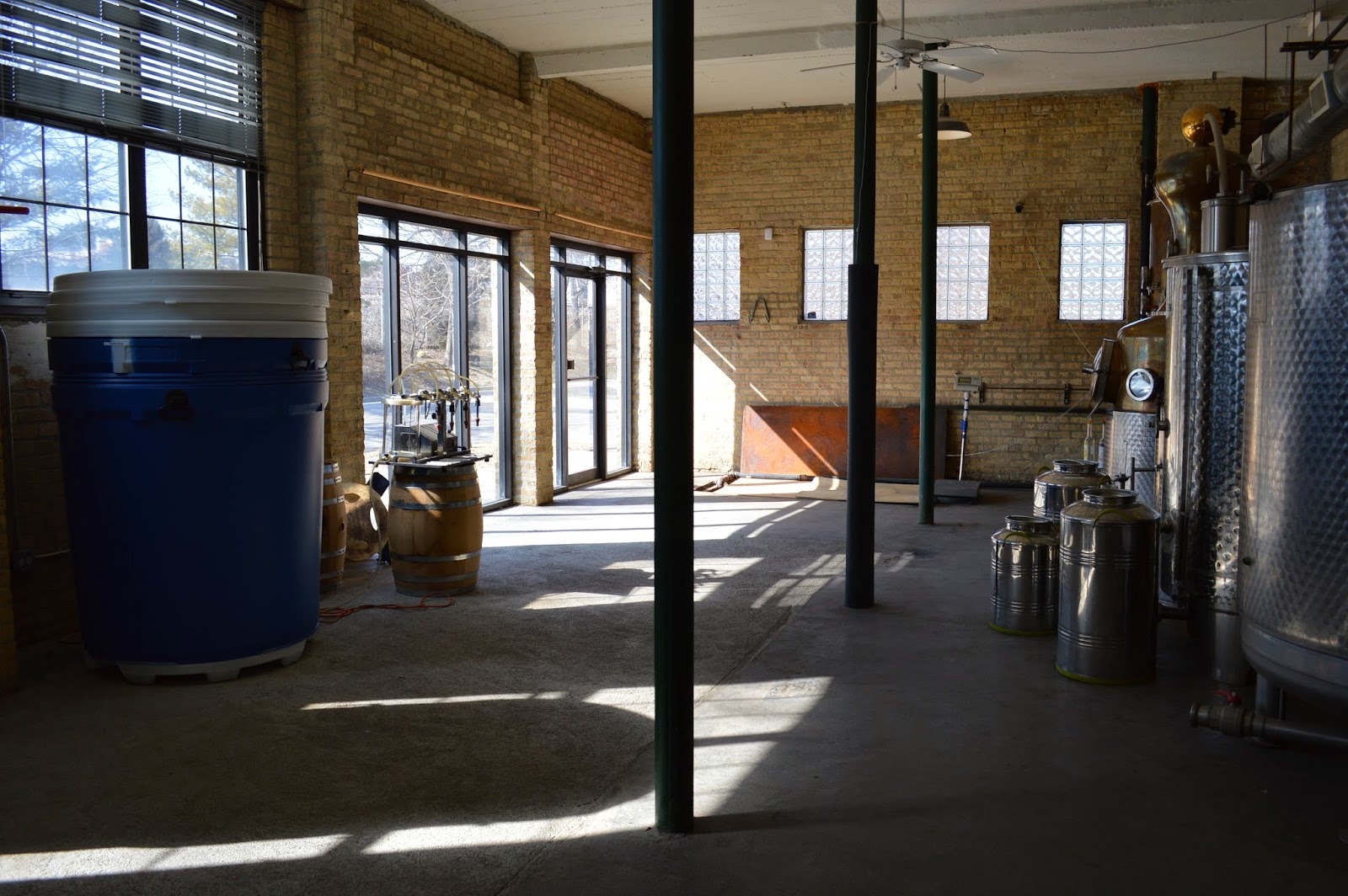 You've got to love any tour that starts with your guide passing everyone a shot glass.  But don't get it wrong, this is not a tour where you get plastered.  It's not a booze crawl by far.  It's a showcasing of the variety of ways that Koval takes the basic premise of distilling and makes it into a art form, creating different alcoholic masterpieces.  It's a chance to learn about what makes whiskeys different from each other, and what sets Koval's products apart from the crowd. 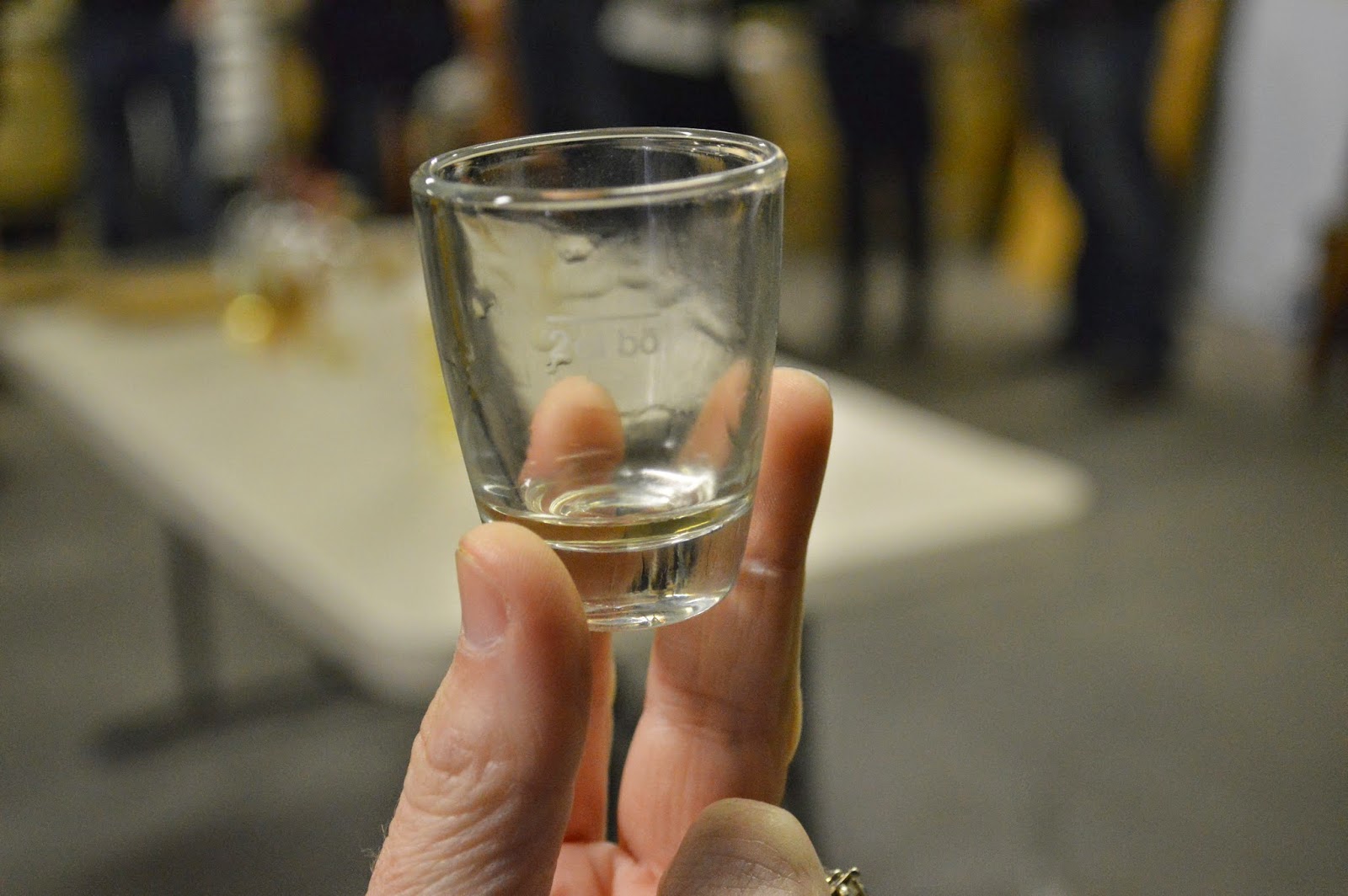 And in case you haven't noticed, there is getting to be a crowd.  When Koval started, in 2008, there were roughly 40 craft distilleries in America.  In 2013?  More than 400.  Whiskey's on trend right now, so much so that there is a shortage, as supply takes a few years to be available to the demand.  But Koval is not afraid of the competition.  In fact, they encourage it.  Koval is the American distributor of German Kothe stills, and the founders of Koval, Robert and Sonat Birnecker, are dedicated to helping new craft distilleries.  They teach classes, consult with the distillers, and help set up distilleries.  After taking the tour and tasting their products, it was clear to me that they needn't worry about any competition, because their work speaks for itself. 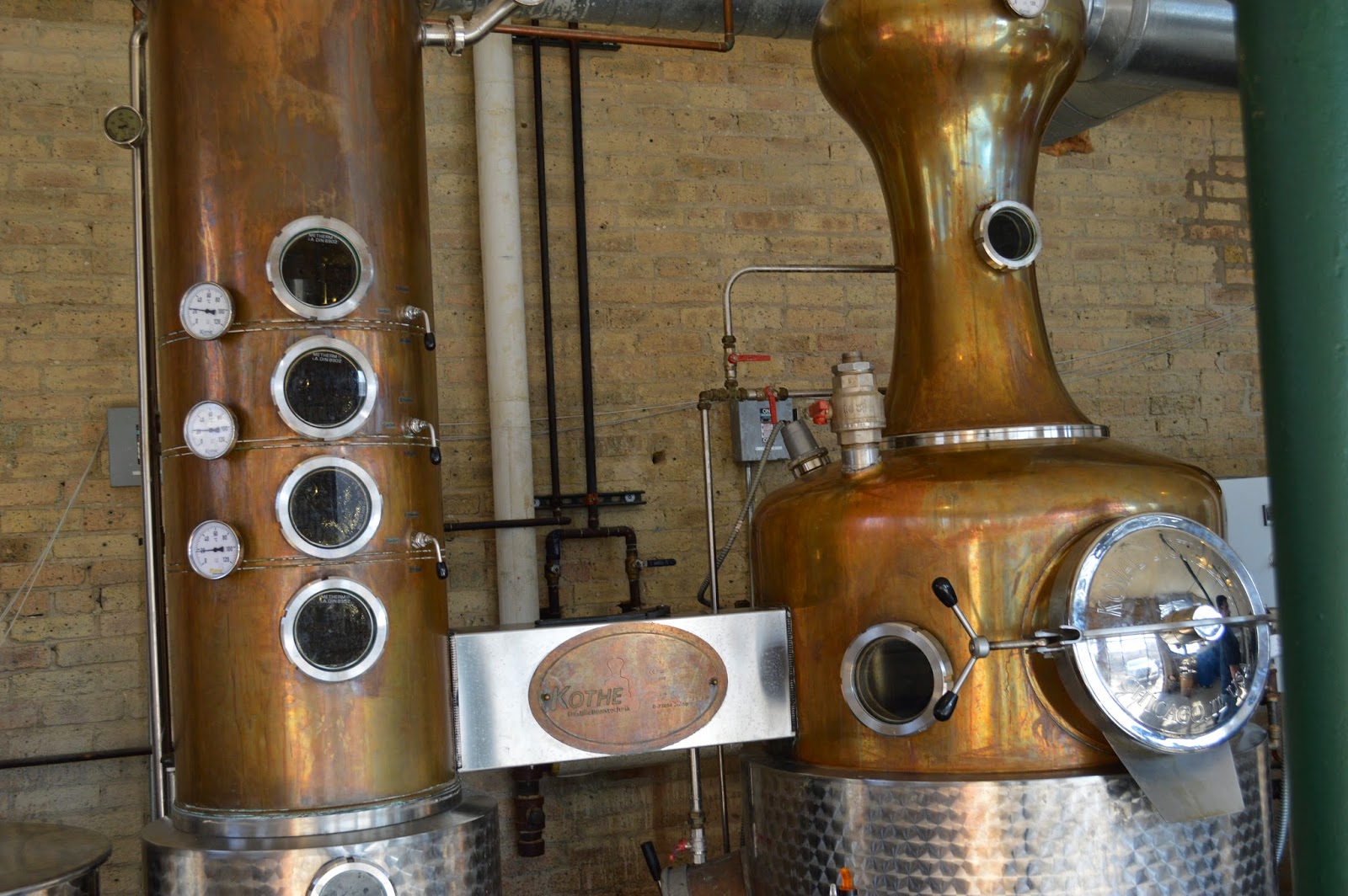 During the tour, we learned about the benefits of the methods that Koval uses.  They stick to single grains to make their whiskeys, except for the Four Grain, which, obviously, has four grains.  This might not seem like a big deal, but it turns out that legally, to call yourself a certain type of whiskey, you need only to make it 51% of that grain. 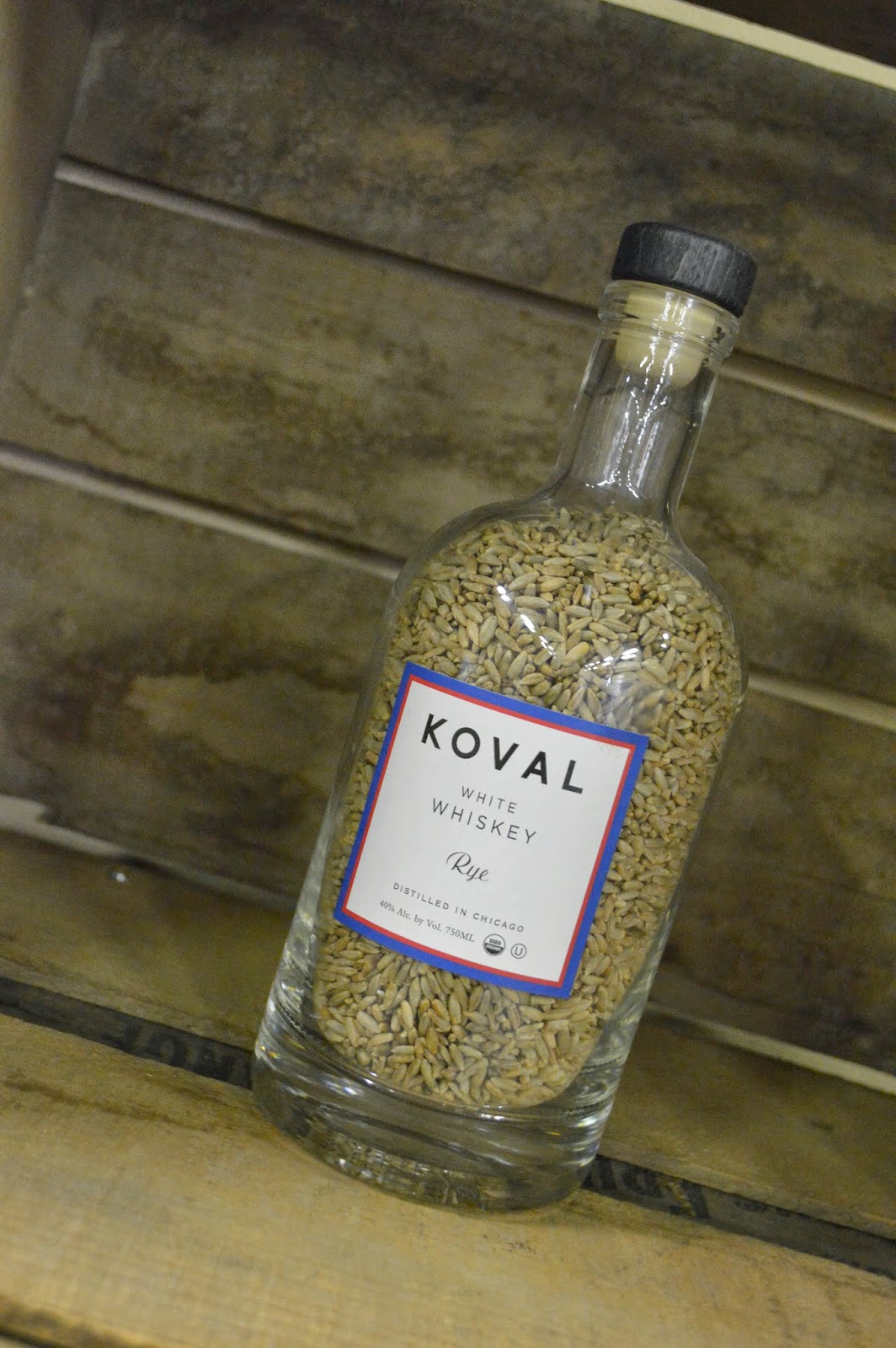 And speaking of grain, Koval sources its organic grains as locally as possible.  Their organic certification means that when you look at the batch number that they hand write on each bottle, they can trace that batch back from what barrel it came from all the way to the field where the grain that was used for the mash was grown.  Oat, Rye, Millet, Spelt...each grain has a distinct flavor to it. 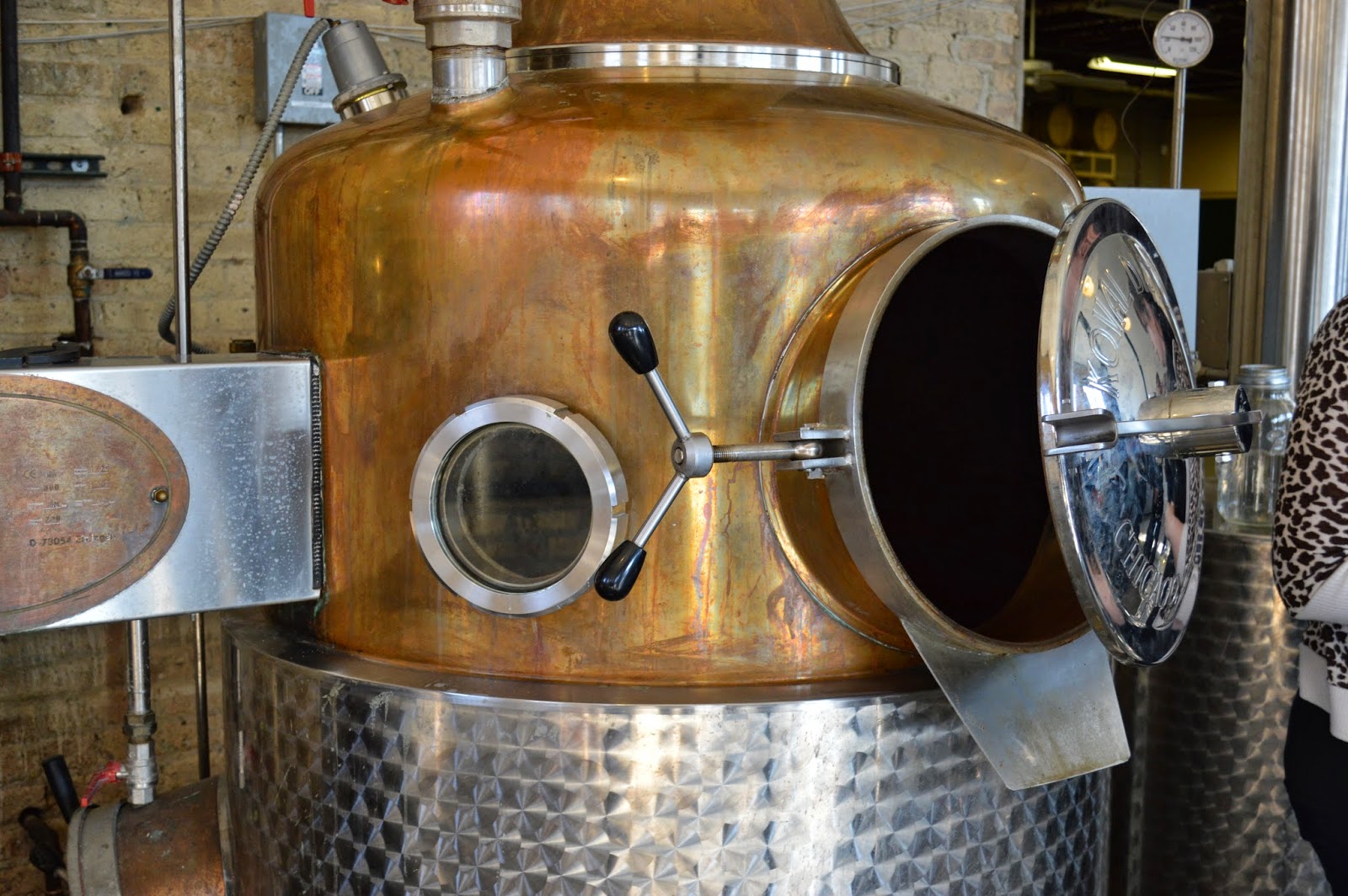 Koval's stills are specially made out of copper. The copper helps to clean the whiskey, attracting impurities to the copper and out of the whiskey.  The founders had a hand in engineering the stills, and make improvements on each new still they invest in. 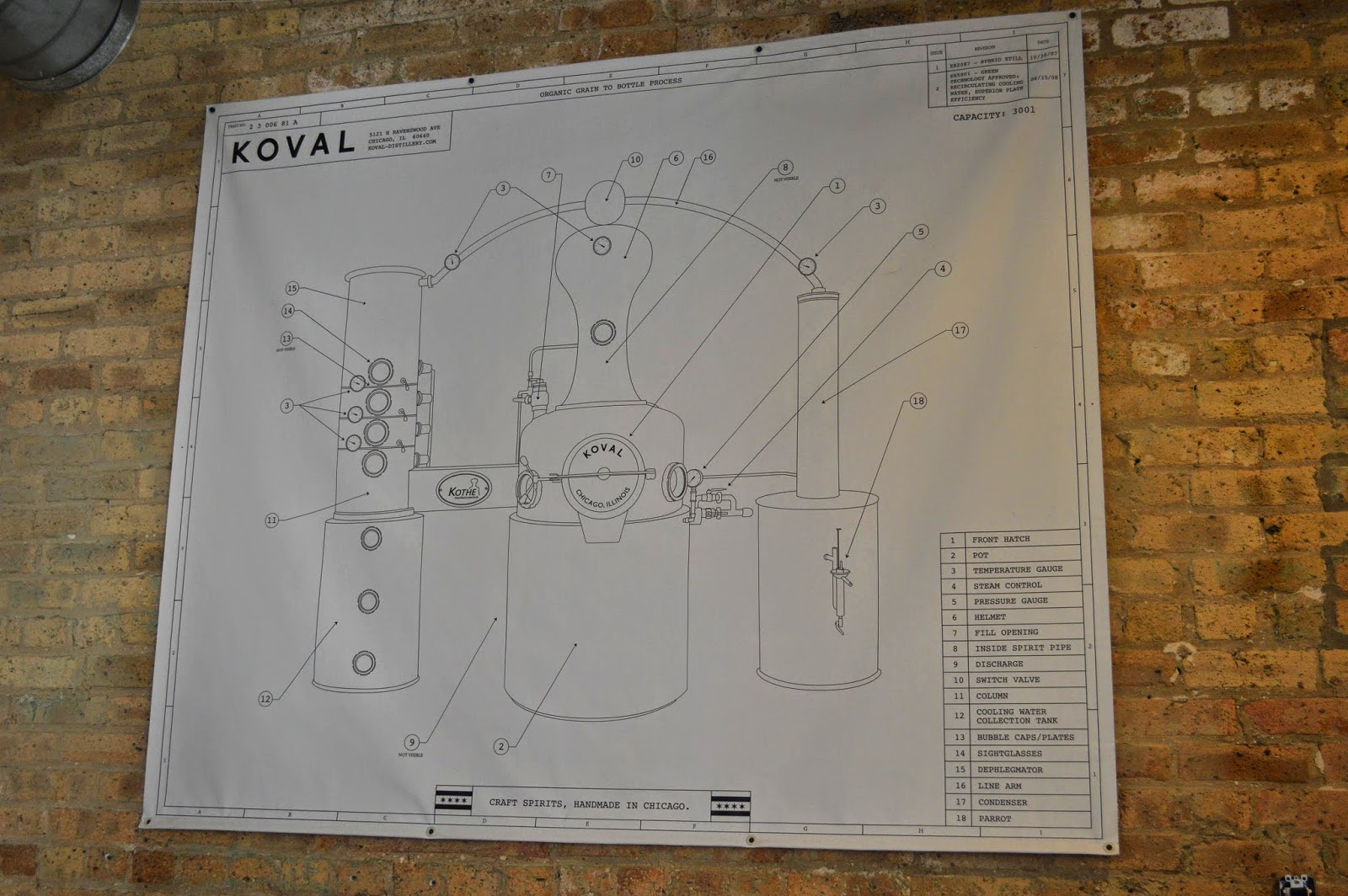 When they do a run of whiskey, there are 3 parts: The head, which is toxic, basically methane and acetone.  The heart cut, which is the highest quality and what they use for their whiskey.  And lastly, the tail, which we were told smells like "wet dog and dirty socks".  They actually re-distill the tail, and the heart cut of this redistilled whiskey is used as the base for their flavored liqueurs. 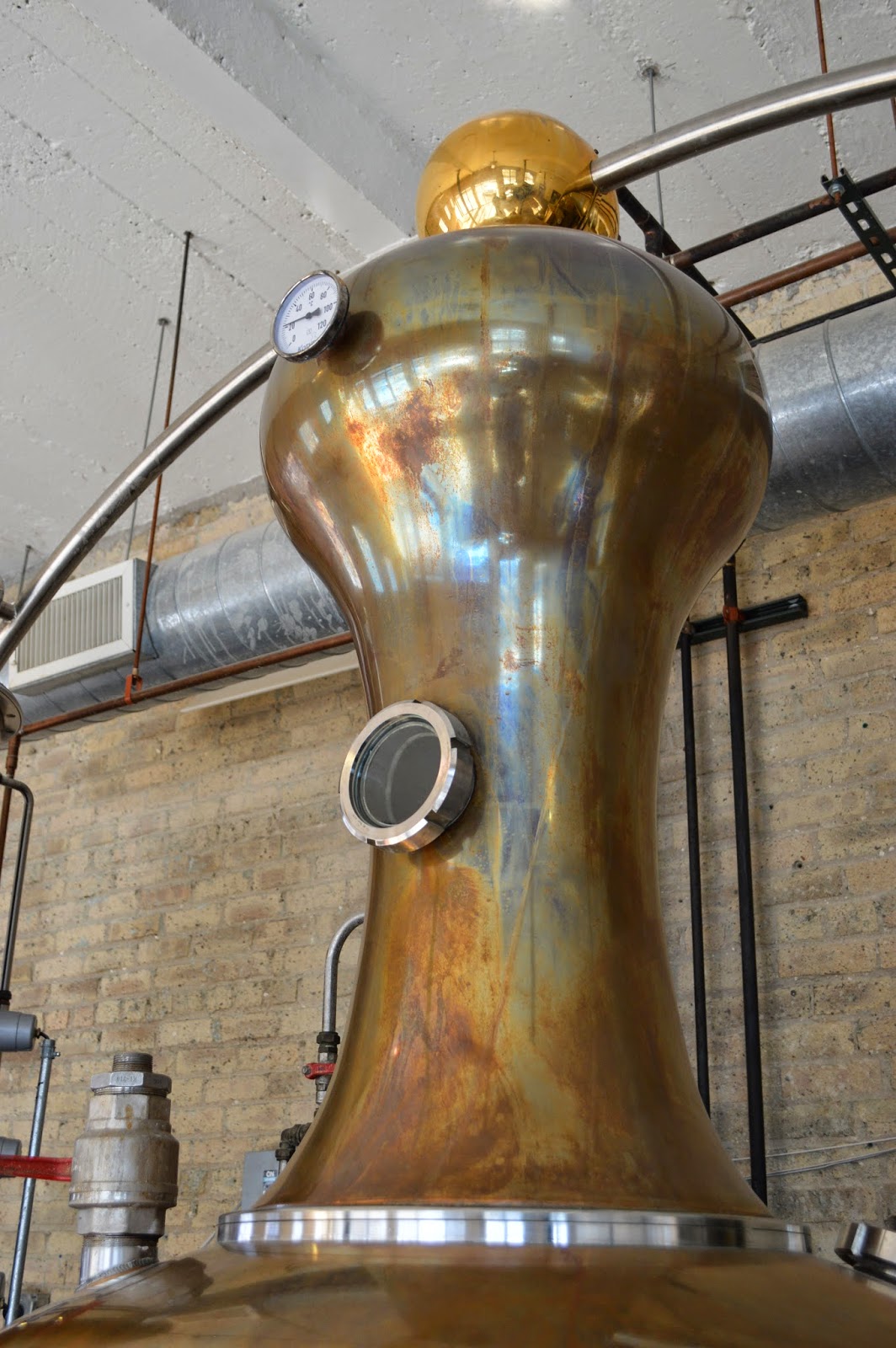 The first two whiskeys that we tasted were white whiskeys, meaning that their aging time was very, very short.  Like 24 hours short.  We tried the White Millet and the White Spelt.  Honestly, both were pretty harsh burns, but you could tell that each had its own flavor.  The spelt, in particular, felt to me like it had waves of flavor.  Like the meal-in-a-piece-of-gum that Violet chewed in Willy Wonka's factory, but, you know, more alcoholic and less ironically punishing. 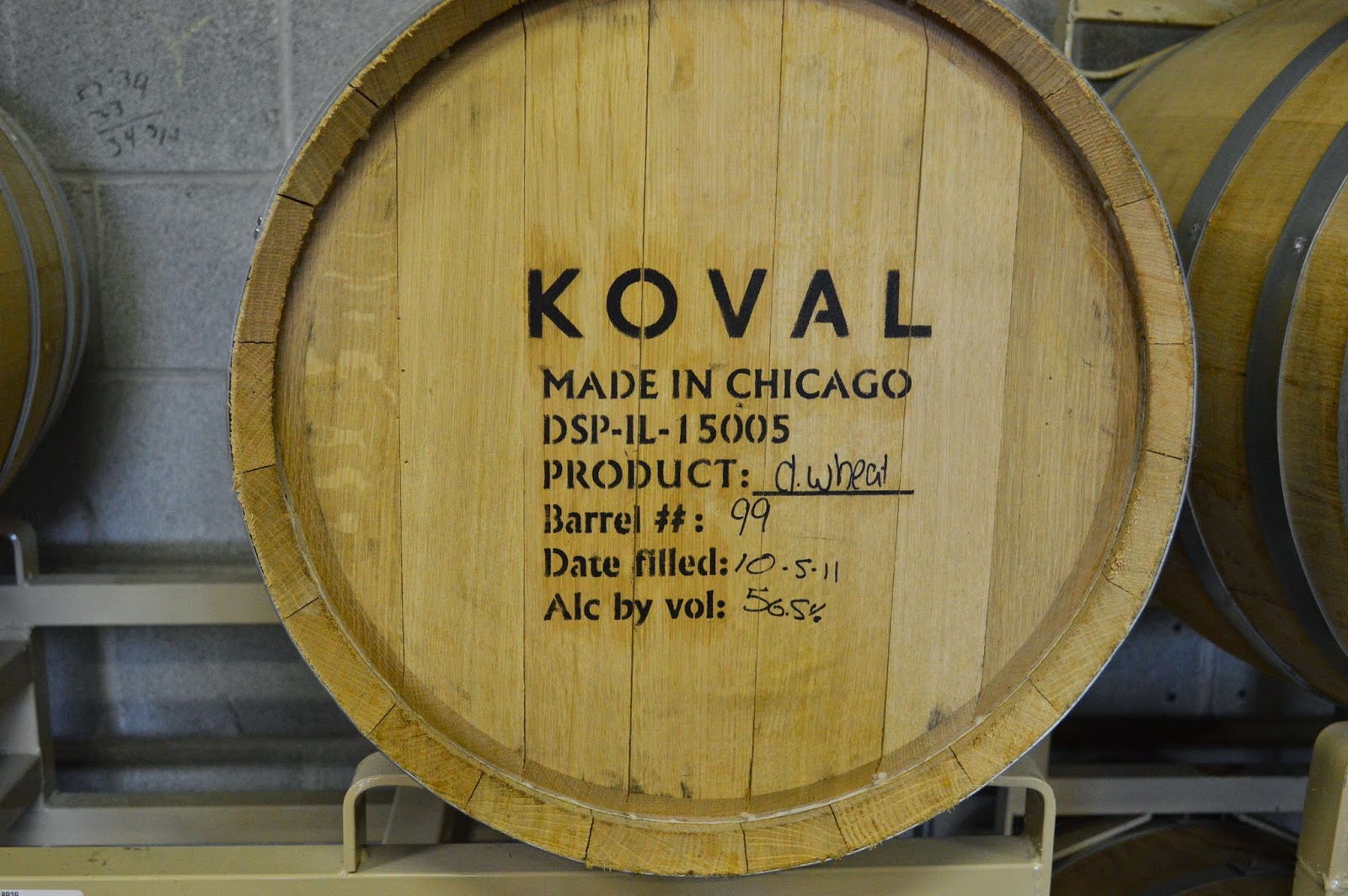 After that, we moved on to learning about the barrels.  Koval ages each batch in a new, American oak barrel.  The barrels are handmade in Minnesota.  Using new barrels allows them to have incredible consistency between batches. Some of the barrels are toasted on the inside, and some are charred.  This has a big effect on the flavor.  They age in the barrels for about 2 years, and we learned that you can over-age a whiskey.  Doing so makes it too bitter, like an over-steeped tea. 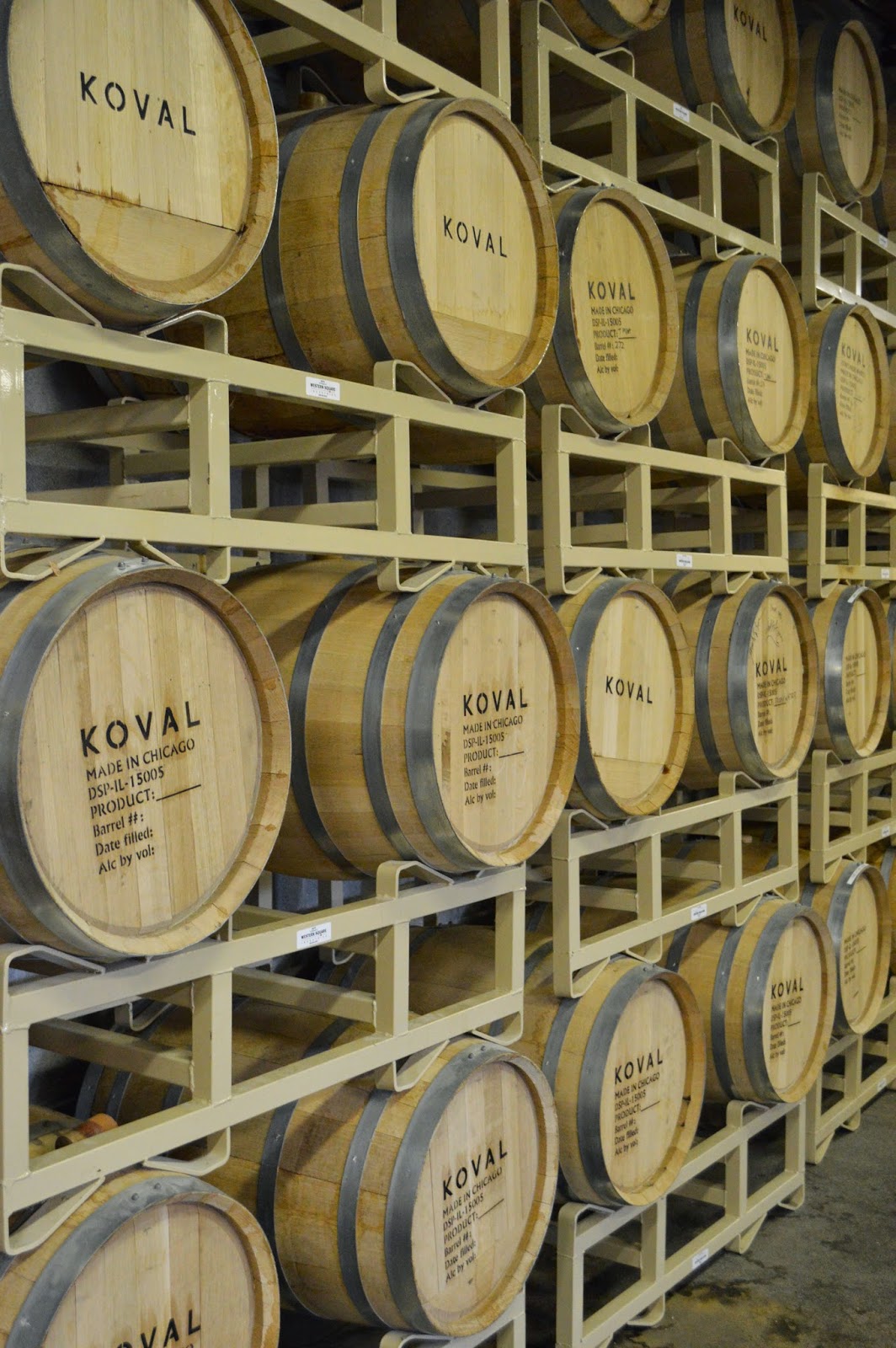 We tried the Millet Whiskey, much different from the white millet whiskey that we had tried by the sills.  Still a bit of a burn for me, but not as jarring as the white whiskeys.  This one seemed to have the most fruit tones to me.  It kept my taste buds interested the whole way through.  Pretty impressive for a grain that's most commonly found in birdseed in these parts.

Then we moved on to the Oat Whiskey.  This has been my hubby's favorite, as of late.  Very smooth, and with almost a caramel tone to it.  We brought a bottle over to a shindig at our friends' house the other week, and, well, I'll just say that, at the end of the night, we had had a lot more than you would expect people a decade of more our of the college drinking years would throw back.

Side note: our tour guide assured us that whiskey made from only the heart cut, as Koval's is, gives less of a hangover, because it's so high-quality.  Just sayin'.

On another tangent, in our tour group, there were a lot of couples.  Hubby decided to point out to me how the "good wives" were pouring most of their tastes into their husbands' shotglasses.  I asked him if he would rather have the type of woman who shares, or the type that can appreciate a good whiskey.  I think he got my point.  Let's face it, he knew what he was getting into when he married me...or, at least, he should have.

After the Oat, we tasted the Bourbon.  I'll openly admit, I was in heaven just with the smell of the Bourbon.  Immediately, I wanted to make my king cake recipe with it.  The fruit notes and the slight vanilla in it would be awesome in the filling for it.  All those flavors and more came out in the tasting we were given.  It has a finish that had almost a tobacco note at the end.  Pure "The South will rise again" type stuff.  This bourbon, on the rocks, could make for a very happy night.  And one hell of a mint julep!

Then, we switched to tasting the liqueurs.  As I said earlier, I already have some experience with the Chrysanthemum & Honey liqueur.  It's delicious.  Basically like drinking a floral honey straight from the jar.  It goes down much more easily than a 40 proof alcohol should.  I also got a giggle out of seeing that the husbands of those "good wives" took this chance to return the favors and were dumping the syrupy tastings into their wives glasses here.

The next tasting was the Caraway liqueur.  This was a home run for me.  Caraway is one of those flavors that I will go to my grave believing is built into my Scandinavian DNA.  Hard to accurately describe, though.  It was, in every way, delicious.  The smell was like rye bread, which I will admit, doesn't sound like the best lead-in to a sweet liqueur, but it is surprisingly comforting.  The flavor is herbal and sweet, with a slight licorice hint to it.  The finish is clean.  It is an experience in a glass. 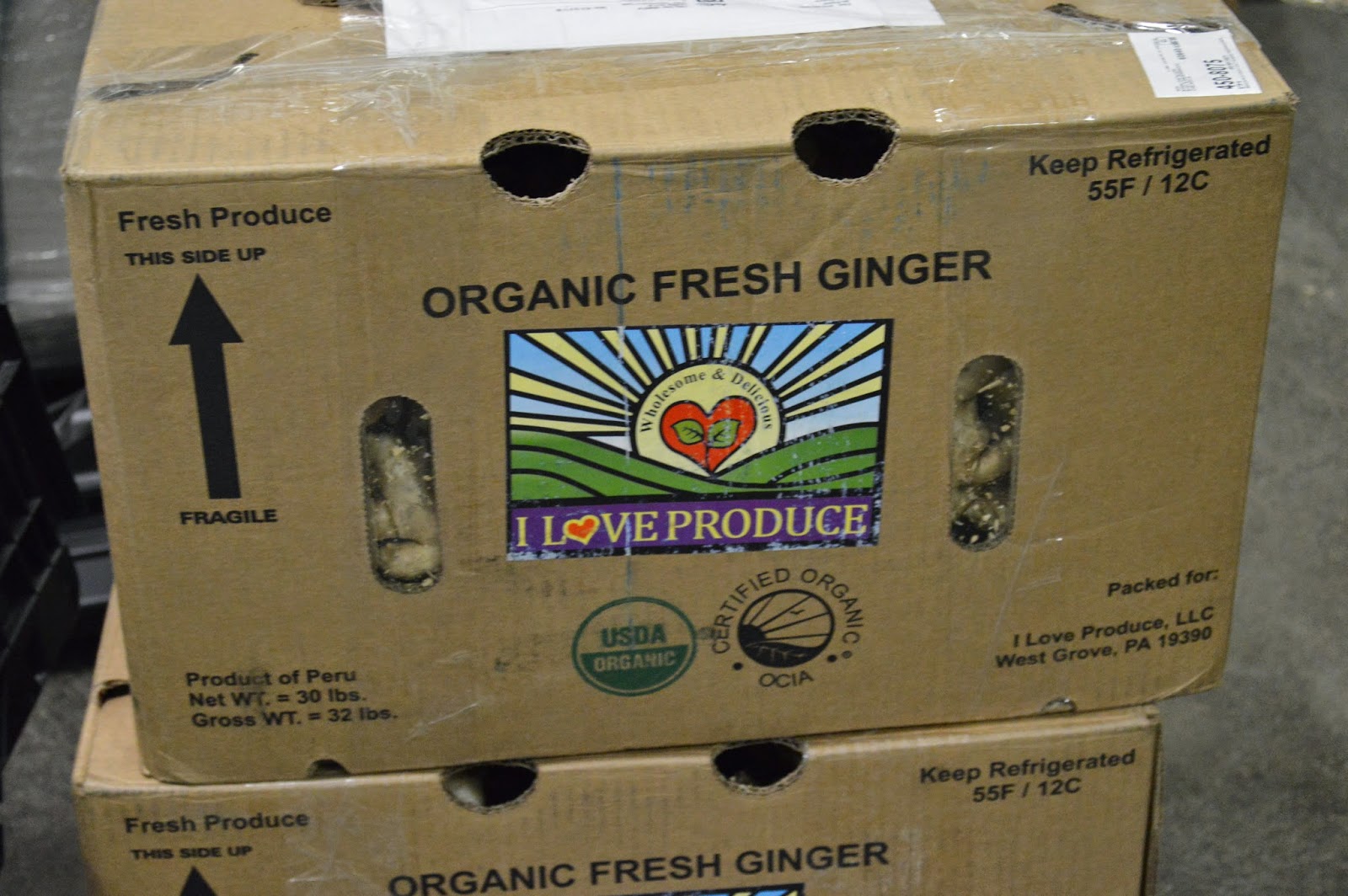 In the shop, after our tour, I was able to try the ginger liqueur, which is beyond words fantastic, and the pear brandy, which actually caught me off guard with how much the essence of the pear came through in the brandy.  They also carry their own vodka, and several other spirits.  I came home with small bottles of the ginger and caraway liqueurs, and a bottle of jasmine liqueur to try.  The only reason we didn't walk out with any whiskey this time is that we currently have both the Rye and the Oat at home already.

Our tour guide was pleasant and very knowledgeable about Koval, which makes sense when you find out that she is one of Koval's 17 (yes, only 17) employees.  You can feel the sense of pride, that sense of family that comes from a small business doing great things.  They work hard, they are constantly looking for ways to improve their products, and there is much to be proud of.  Koval is a great example of what I wish there were more of around here: respect for quality, cooperation between local producers, and honor for heritage craft.

As much as I like to ramble on about my adventures, there's so much more to the Koval story than I've said here.  We learned a lot about the whiskey industry, the distilling process, fun peeks into history, and the incredible story of the founding of Koval.  Koval typically runs tours every Wednesday night at 7, Saturdays at 1,3, and 5, and Sundays at 2 and 4.  Be sure to call them or check their website for current tour times.  The tour runs about an hour.  They also hold Whiskey Workshops and Cocktail Classes at the distillery, and Koval spirits are available at many liquor stores and some high-end bars.  Definitely worth the trip, and deserving of all the awards and accolades that they have been receiving. 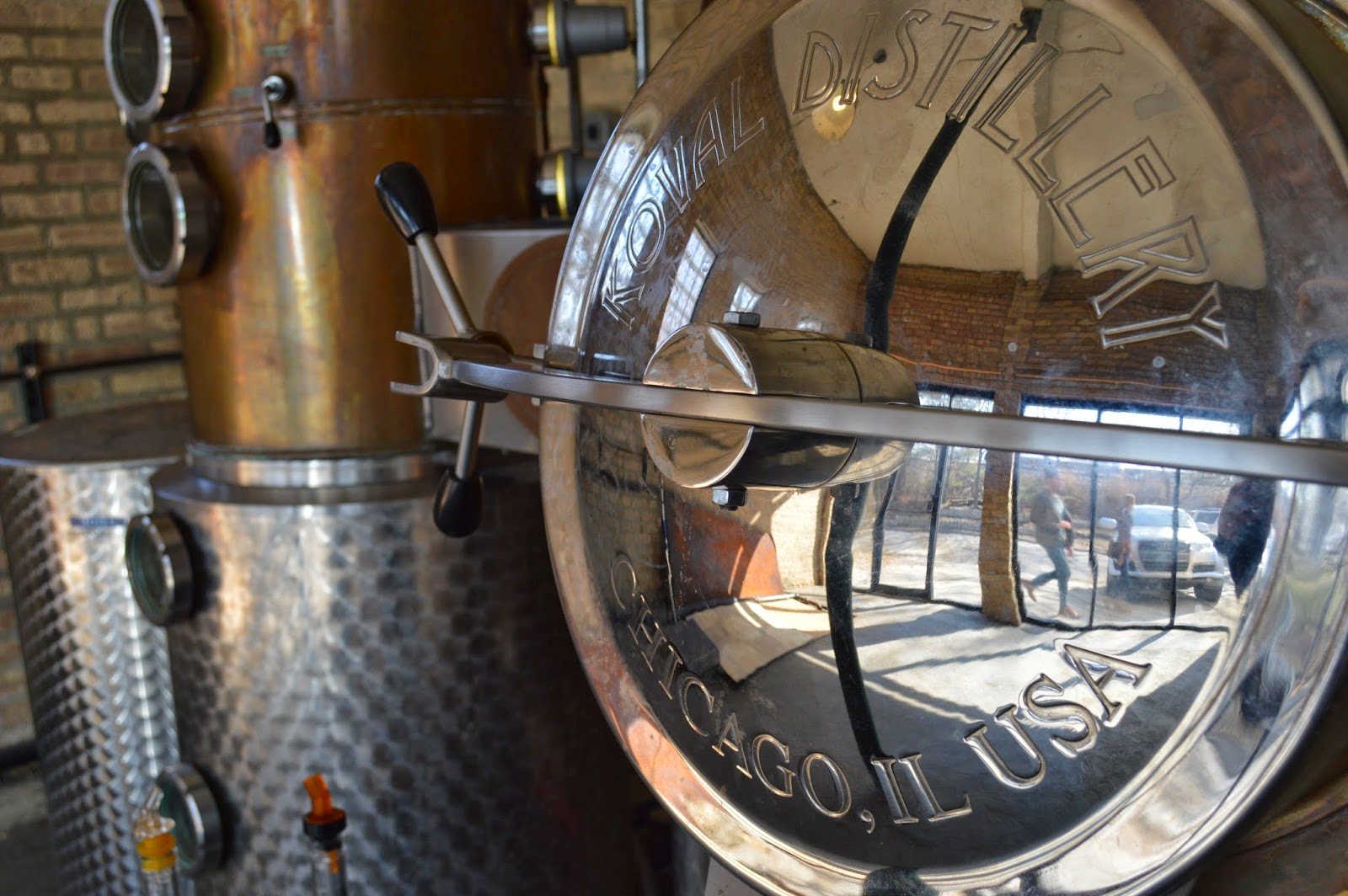