There may be a crack in the universe.  I feel like a kid who was told by a friend that Santa's not real.  One of my culinary beliefs has been shattered.

It's not hard to make caramels.

Mind you, I have probably spent hundreds of dollars over my lifetime on delicious, expensive, artisan caramels.  Not all the time, mind you, I'm not crazy.  But as a once-in-a while indulgence?  Absolutely.  I love the texture of a perfect caramel, how it melts away, but slowly, so that you can linger in it's decadence.  I'm drawn in by unusual flavors like bourbon-walnut and Earl Grey.

And now I can make my own.

It's like finding out that I have a super power.  I can't explain how intensely exciting this is to me.  I'm like a mad scientist who has harnessed the power of lightning.  I'm the Nikola Tesla of my own kitchen, driven swiftly towards madness by my own potential.

Okay.  Power trip over.  I can create amazing caramels, but I still am barely holding on to a shred of control over the mint in my garden.  Combine those two, and you get... 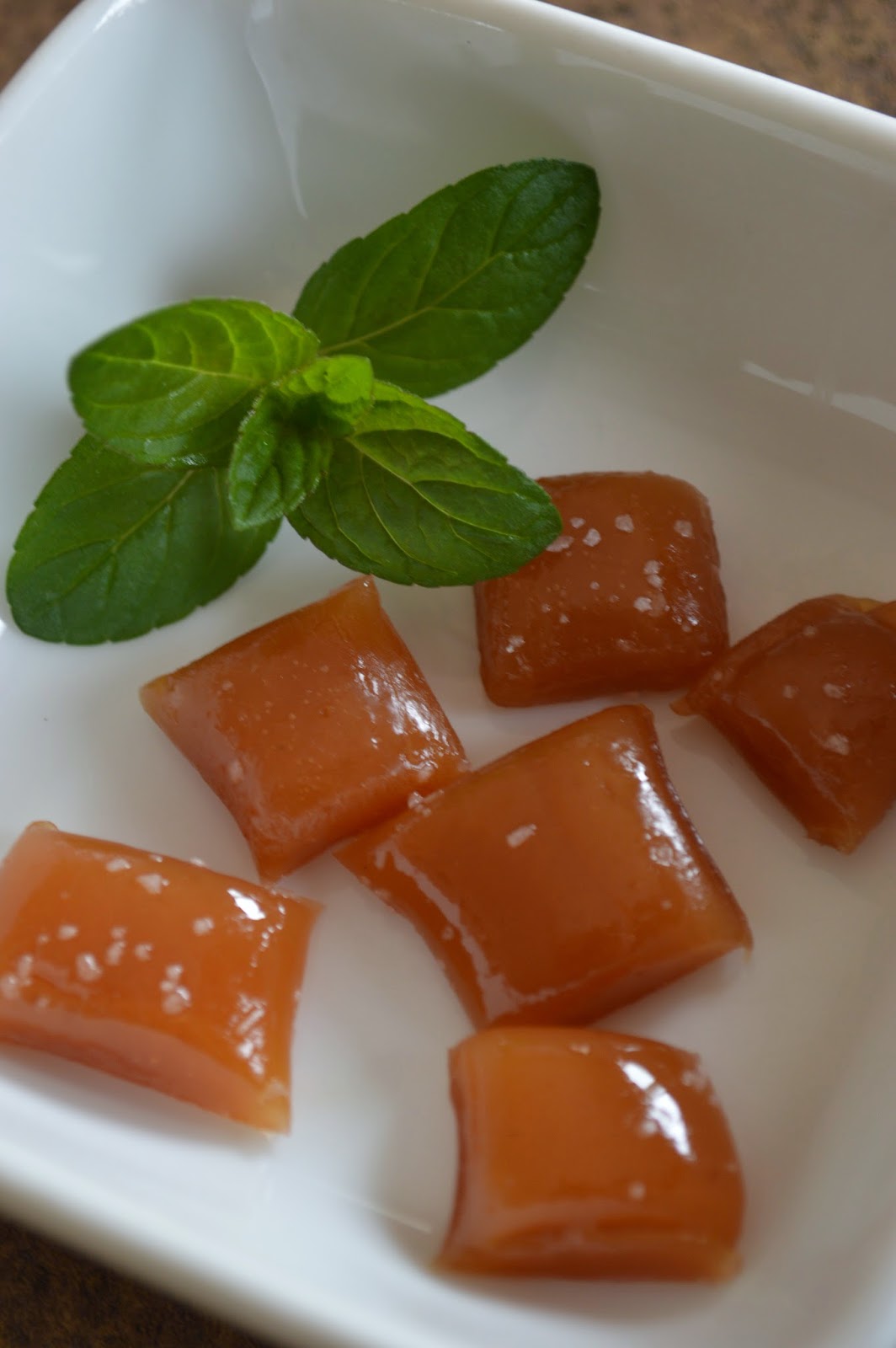 I have some pretty vivid food memories from my childhood, and one of those is of a Lifesavers flavor that I swear was called Buttermint.  It was sweet, and minty, and a tad salty...and I haven't been able to find much about it, even with the immense trivial fact power of the internet.  But that taste is like my great white whale.  And these caramels are like going fishing for that whale and catching the Loch Ness Monster.

So, the aforementioned internet has a TON of caramel recipes and techniques out there.  But mint caramels?  Pretty much zip.  Again, this could mean I'm a visionary, or it could mean that it's a horrible idea.  Also, they all have slightly different approaches and techniques.  Some are very scientific and technical, some are very haphazard and lenient.  My mind just about exploded trying to process it all.  I think that the hardest part about making caramels was just figuring out what approach I wanted to take.  Except for one part: I wanted to avoid corn syrup.  I'm not going to shame you if you use it, but I know that you can make delicious caramels without it, so why use it if you don't have to?  Honey seemed to be an obvious substitution.

So, here's how I made my mint caramels.  Feel free to mess with the recipe to make it to your taste, but this one hits the spot for me and my family.

Plus, I get to have that cool mad scientist feeling...I have created MINT CARAMELS!!!!  Mwahahahahahahaha!!!!!!!

Take a square baking dish, lay a piece of parchment it in, and butter up the parchment and the sides really well.

Grab a bunch of mint.  As much as you want, but at least 12 stalks or so.  Rinse it off to clean it, and pat it dry gently in a towel. 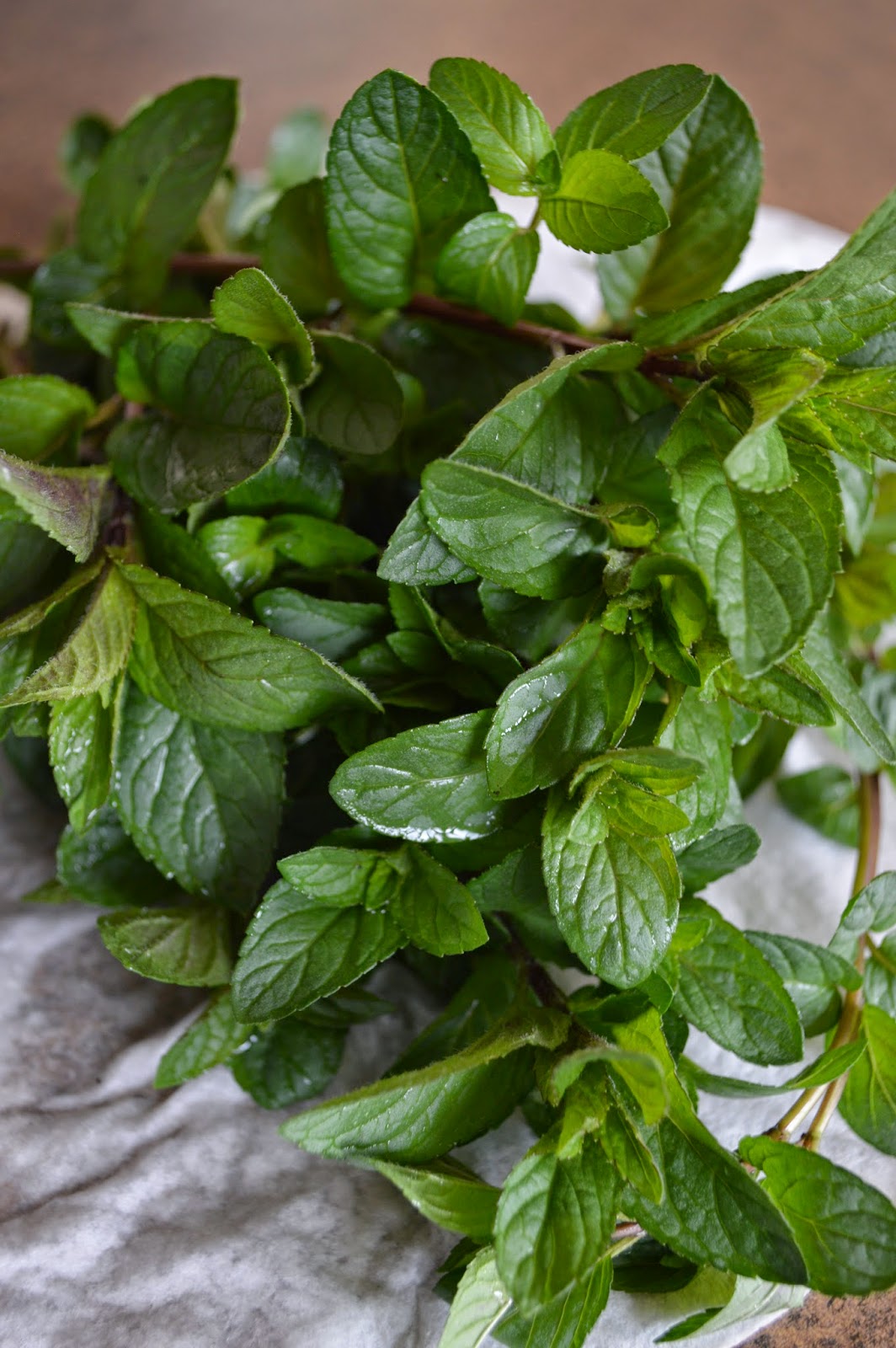 In a small pot, pour a cup of cream and a stick of butter.  Take a small bunch of the mint and bruise it up a little in your hands, rolling it around to slightly crush it.  This should help to release the oils in the mint and help it release more flavor.  Throw the mint into the pot. 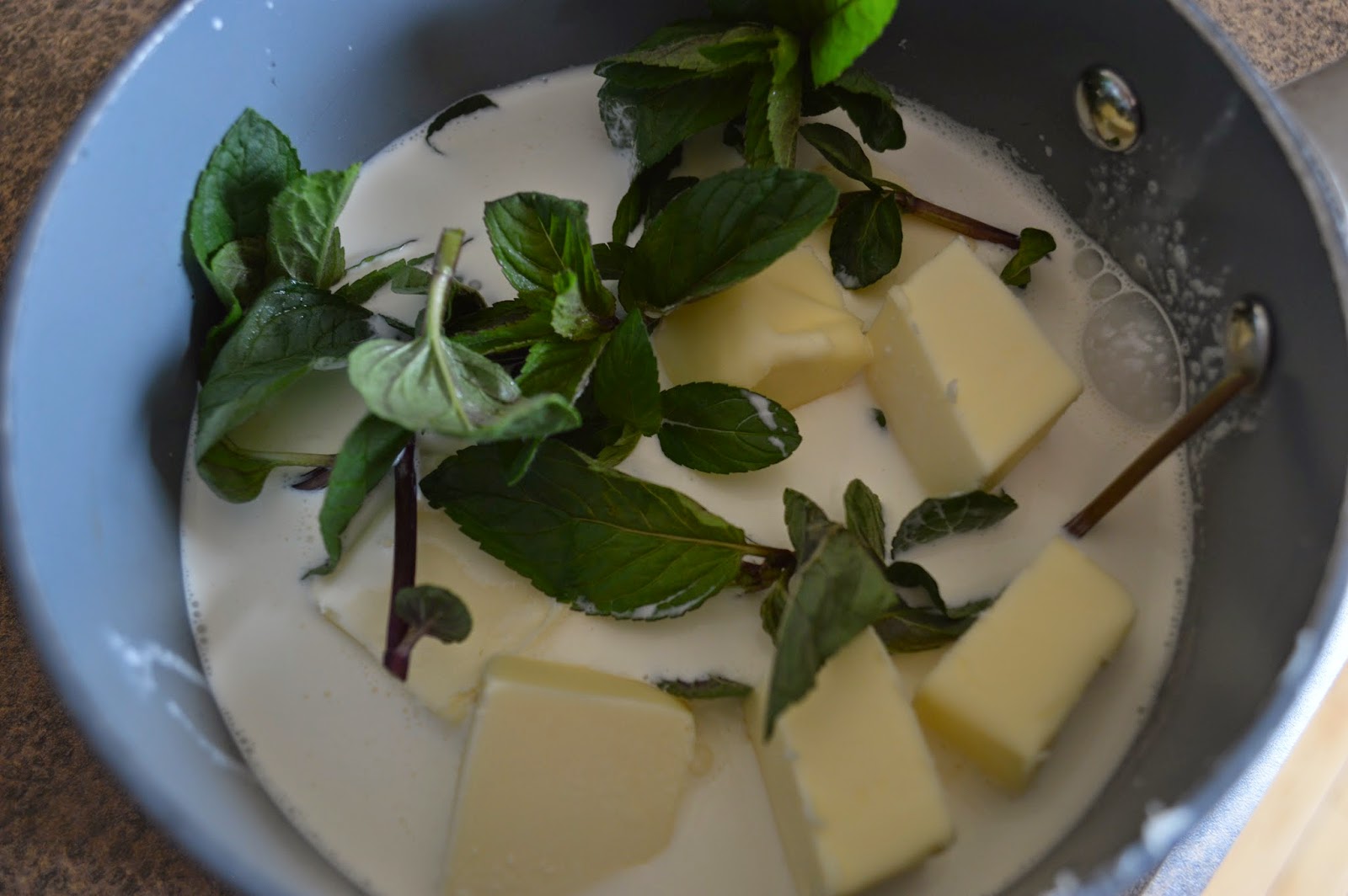 Warm the cream mixture over low heat until the butter melts, then turn off the heat.  While it's warming, you can start the next part. 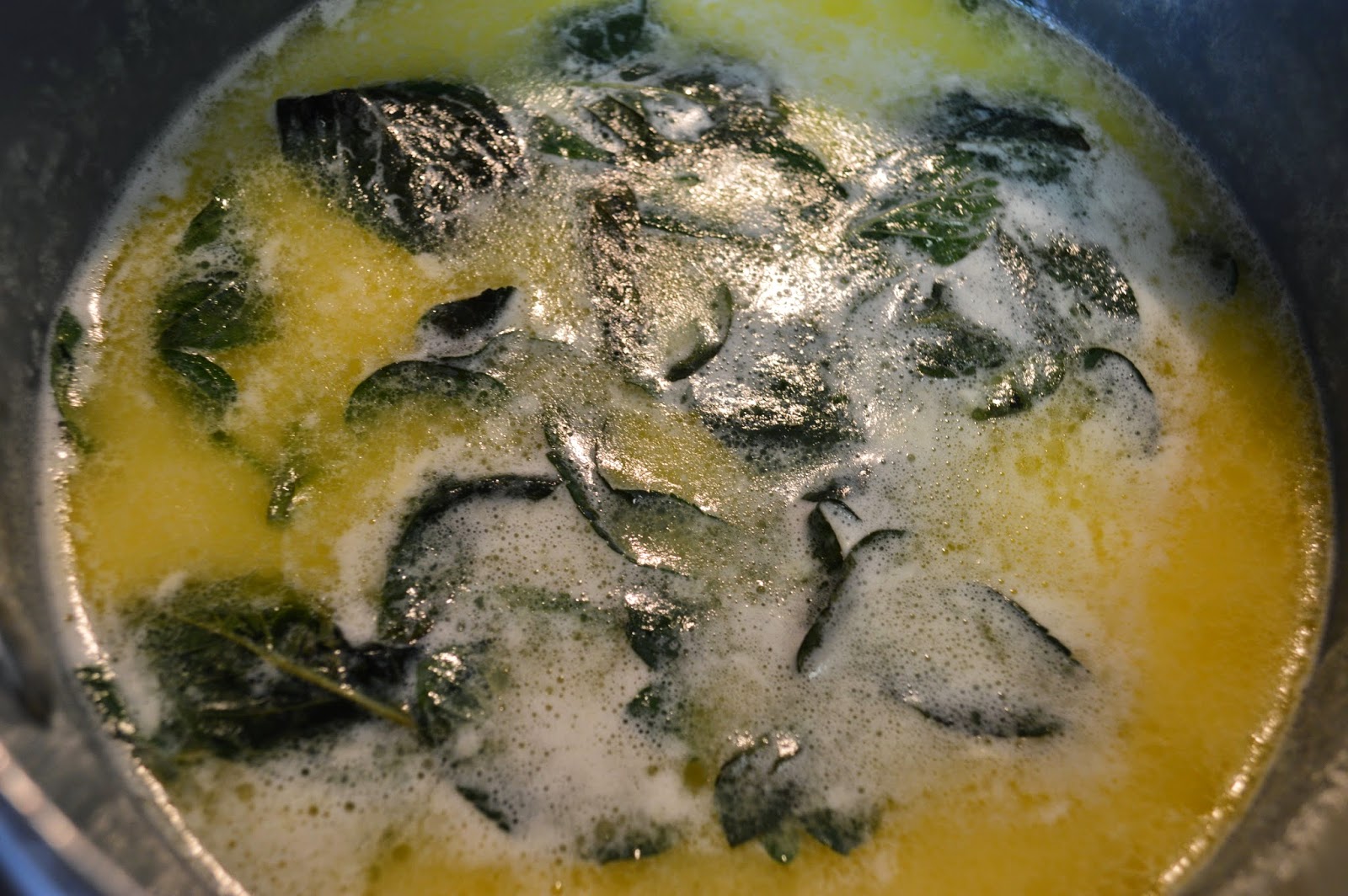 In a large pot, mix a cup and a half of sugar and a half cup of honey.  You can add in a teeny bit of vanilla here too, just to round out the flavor, but you can skip it if you want.  Repeat the mint bashing process and add that.  If you are okay with mint chunks in your caramels, you can also just go ahead and chiffonade some mint and mix it in, but I wanted a cleaner looking caramel, so I kept it in stalks that I could remove more easily. 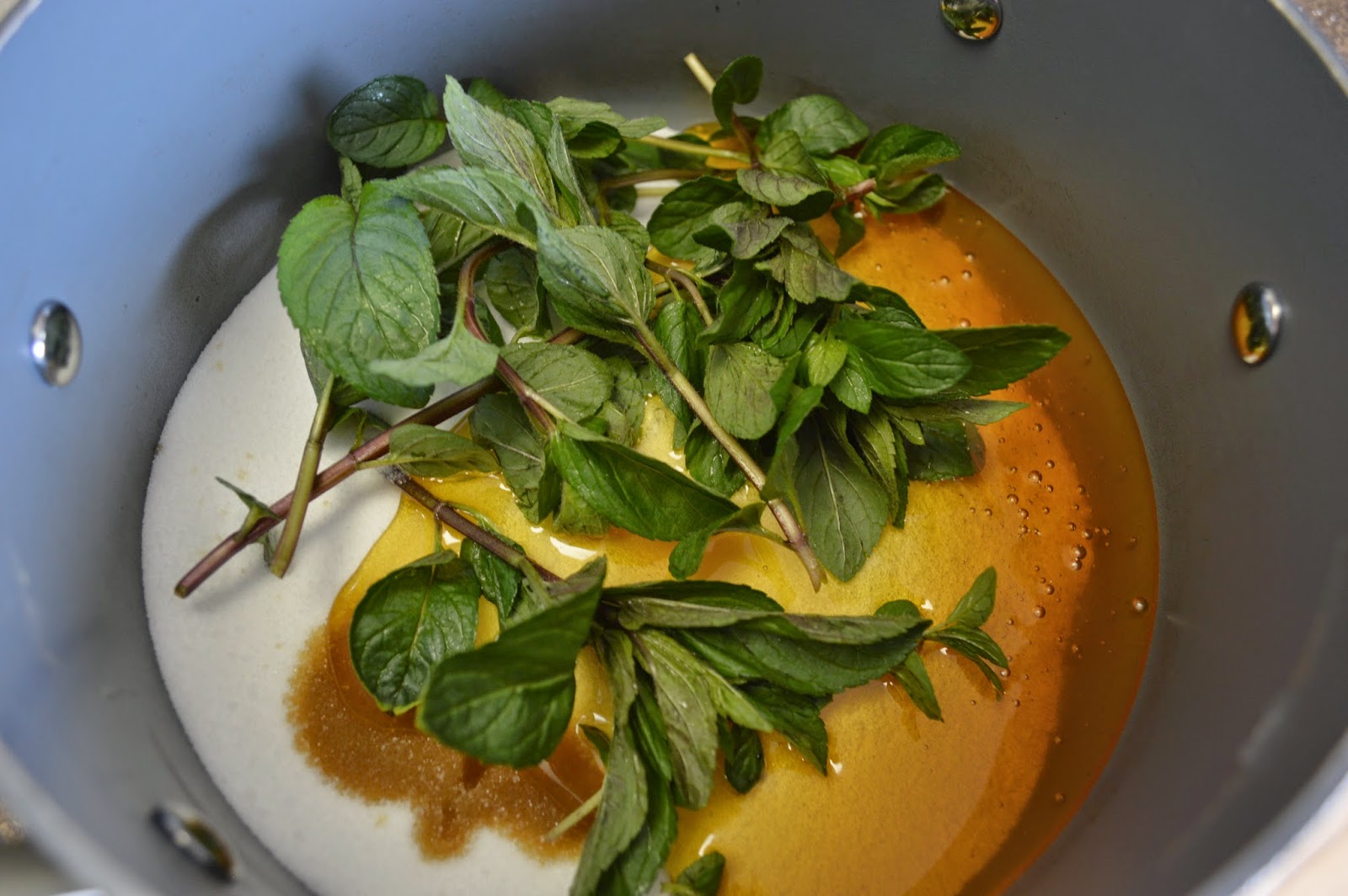 Heat the sugar honey mixture over medium heat until the sugar melts and it's more of a liquid.  Give it a quick stir, clip a candy thermometer on to the side, and stop stirring it.  I'm serious.  Don't stir it again.  Over medium heat, bring the temp of the mixture up to 250 degrees Fahrenheit. 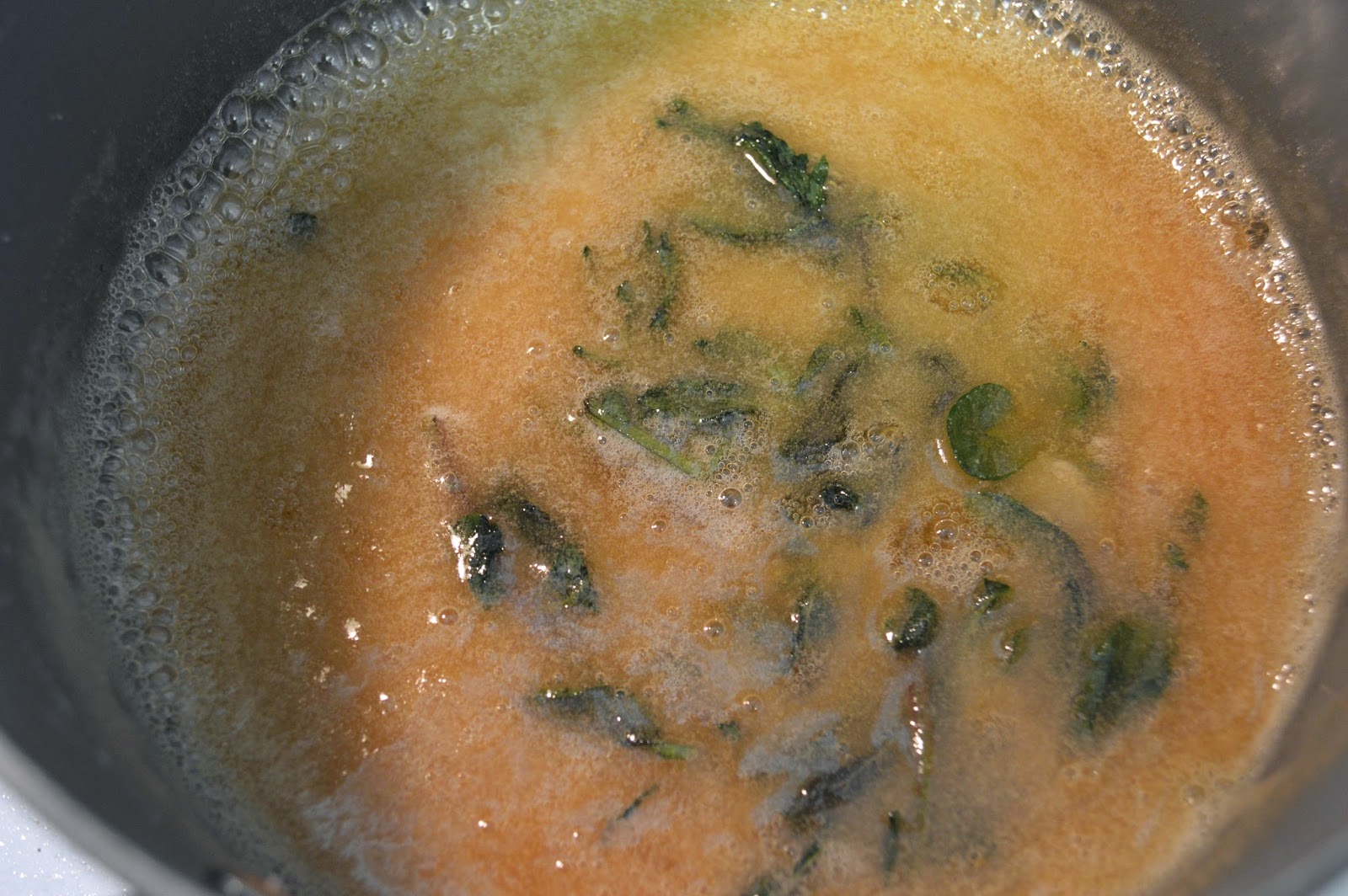 Once the syrup is at 250, discard the mint out of the cream mixture and slowly whisk the cream mix into the syrup.  It will bubble up a lot...stay calm.  Once it's combined, stop stirring again. 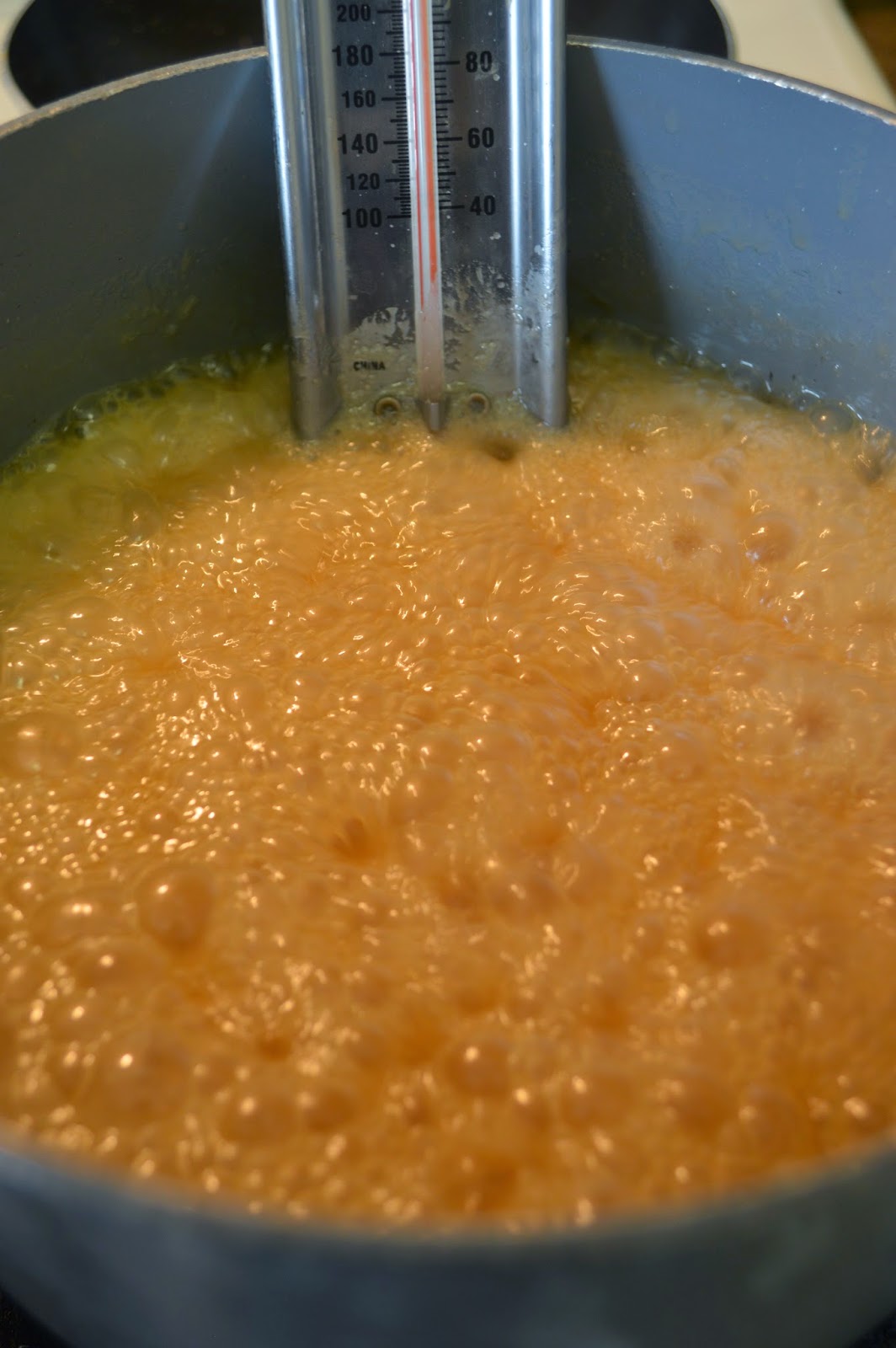 Bring the mixture back up to 250 degrees again.  With a fork, pick out as much of the mint as you can and discard it...unless, of course, you wanted it in there and chopped it up. Then pour the caramel liquid carefully into your prepped pan. 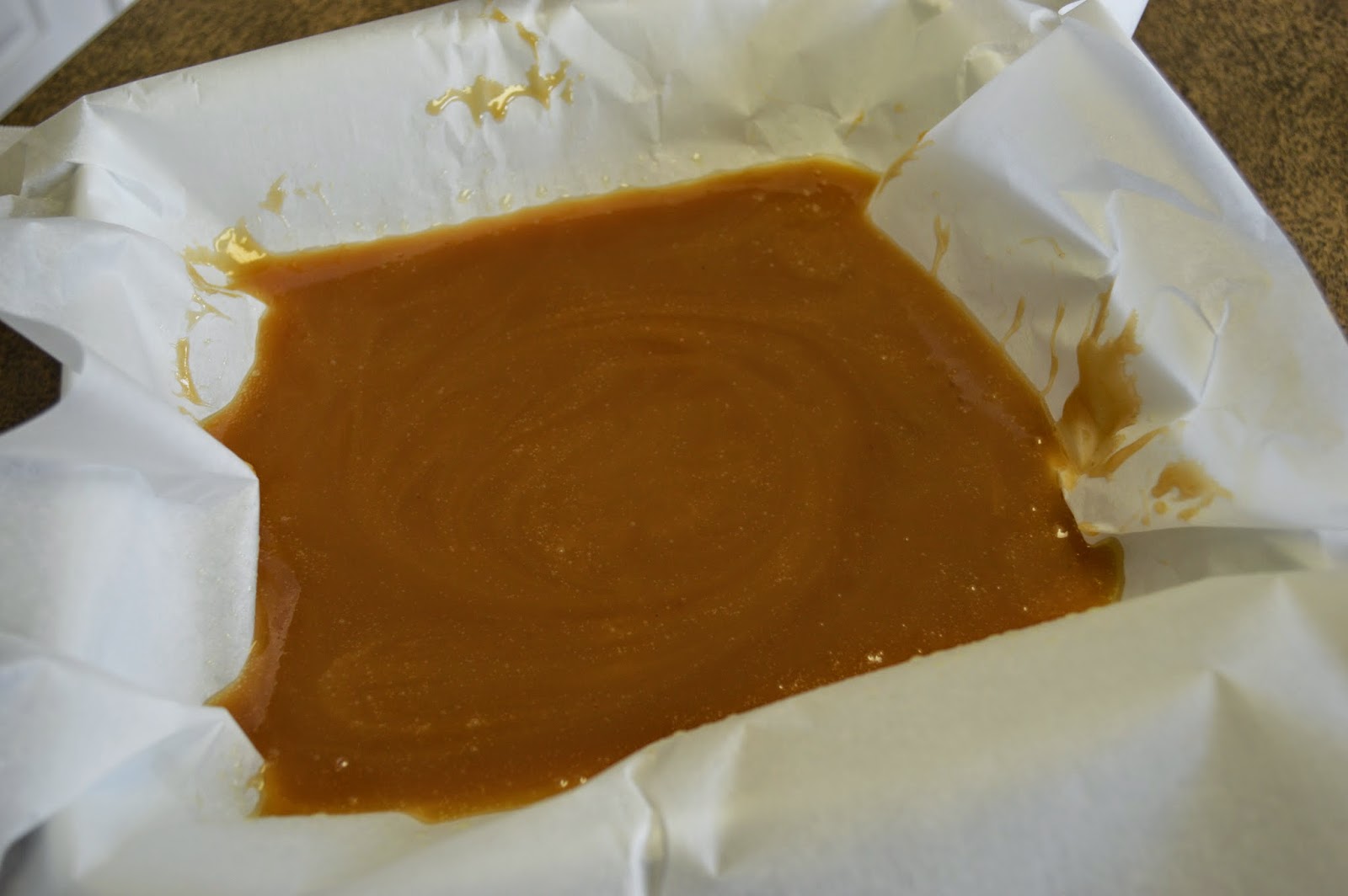 Let me remind you once again that hot sugar might as well be molten lava.  Liquid hot magma.  Please be careful.

Let it cool for about 15 minutes, then give it a sprinkling with some large-grain salt.  You can skip this if you really like sweet caramels, but I like mine with a touch of saltiness. 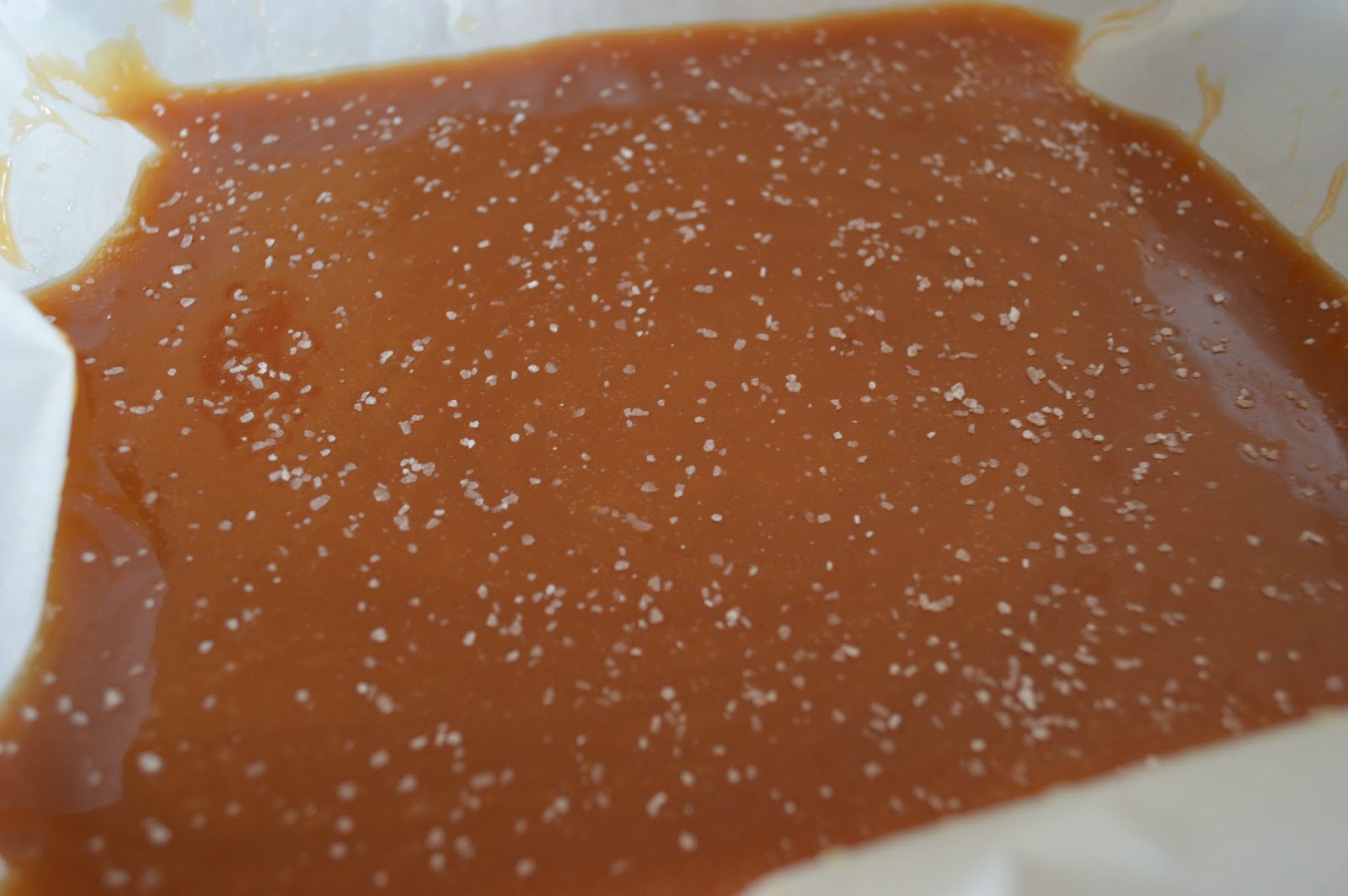 Let it cool for an hour, then slice it up.  I like using a flat edge to cut them.  It really gets through that caramel.  If your caramel is too sticky, you can butter your cutting utensil to help.  If you try to cut it too early, it will most likely just ooze back together.  Also, I found that cutting from the center out was the best way to go, because it smushed the caramel towards where I still had to cut rather than back into the cuts I had just made. 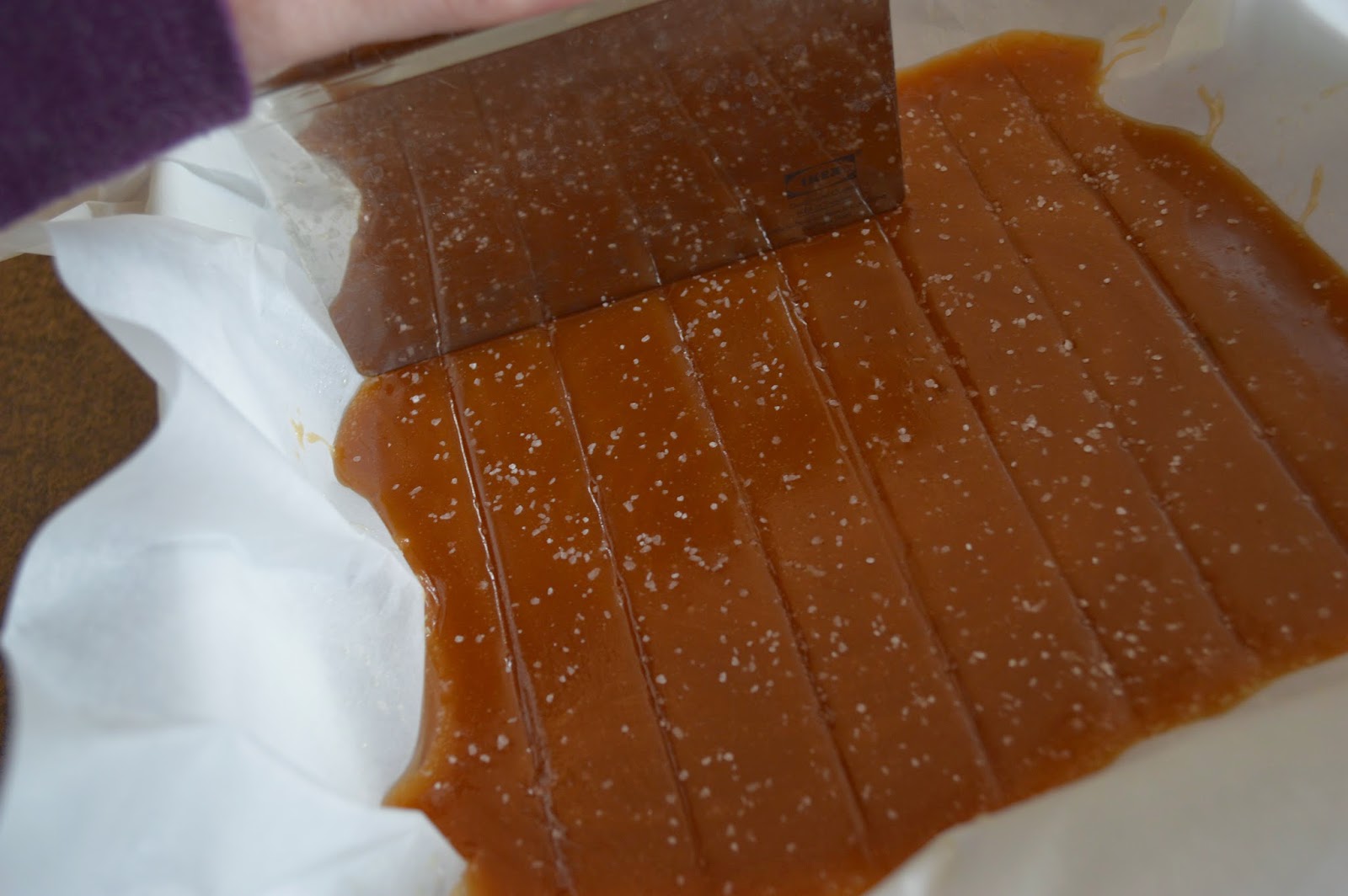 Honestly, there were still little pieces of mint in the candies that I hadn't fished out, and they were just as tasty, and not unappetizing to look at.  You can see it a little in this next picture: 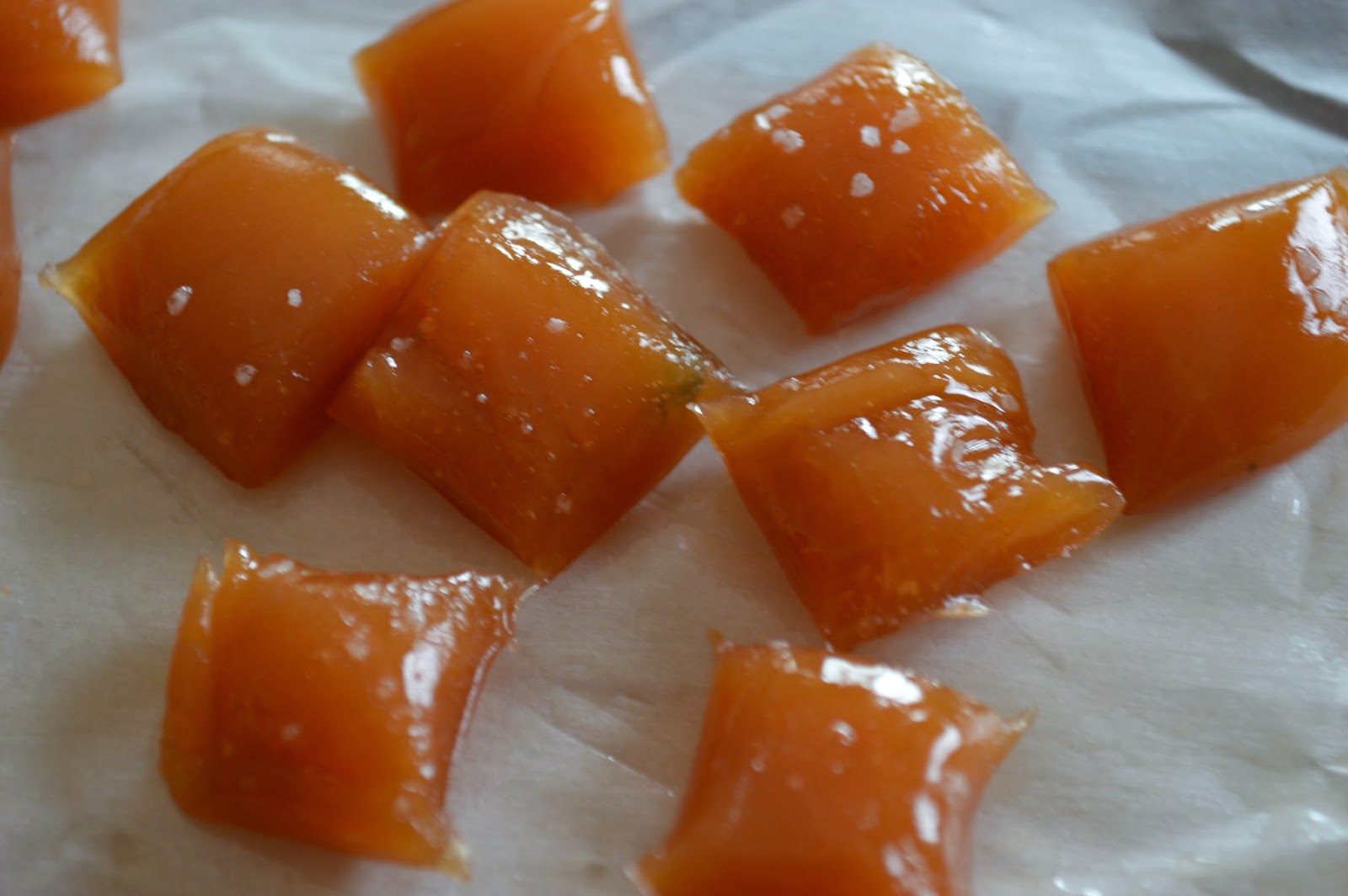 Cut pieces of wax paper or parchment to wrap the caramels in.  I have found that offering samples to those who help wrap is very motivational. 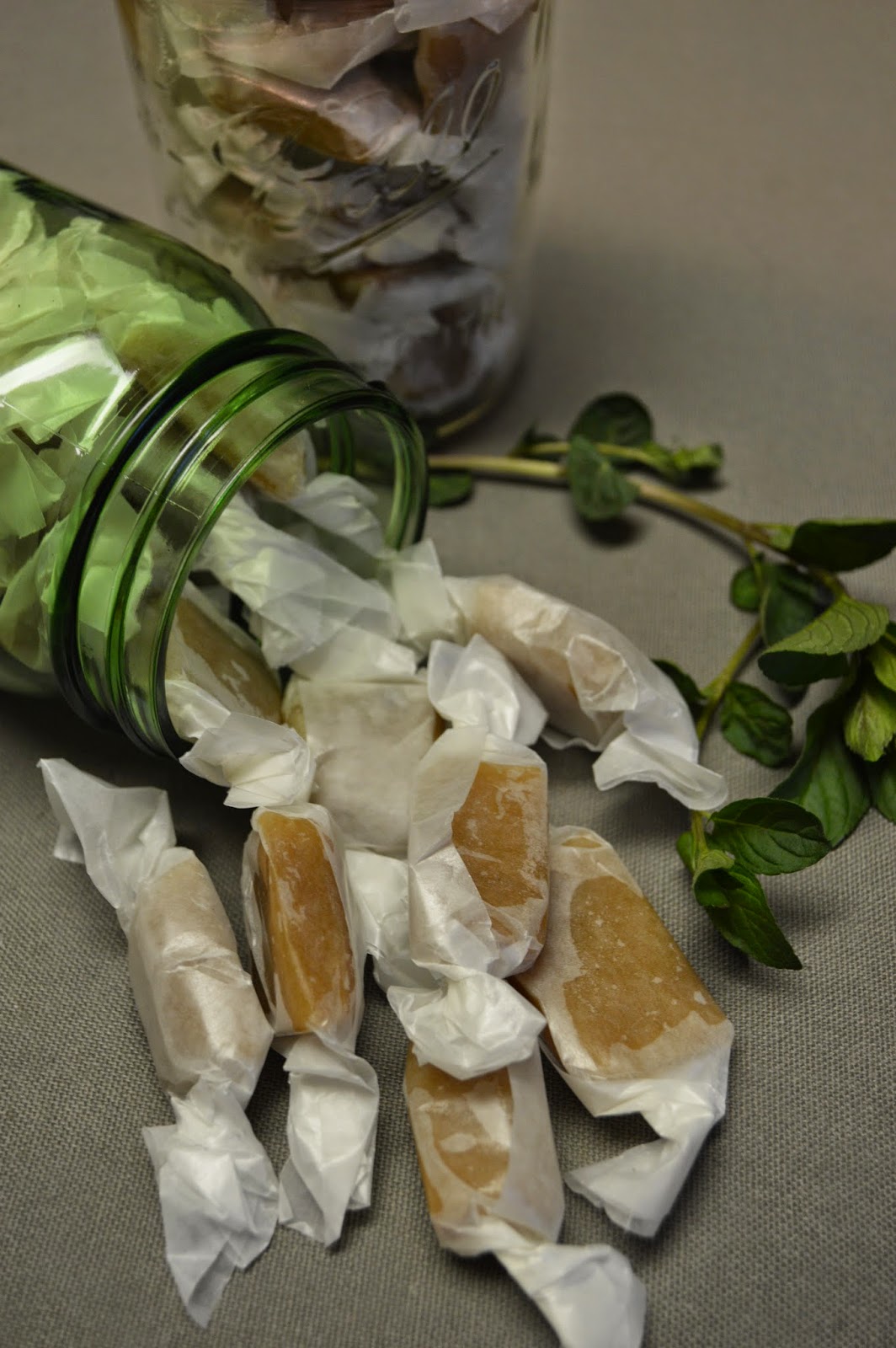 That's it!  That's all there is to making caramels!  I'm off now, to continue dreaming of all the awesome specialty flavors I want to mix up next.