When Melissa from Front Porch Gourmet asked if anyone was up to do a little recipe swapping, I jumped at the opportunity!  She is one of those people that I can tell is as infatuated with food as I am, and she's always got yummy vittles up on her blog.  The one that caught my eye and my heart...and my stomach, and probably my stomach's heart too...was her recipe for Rosemary Lavender Yeast Rolls.  Yes, please! 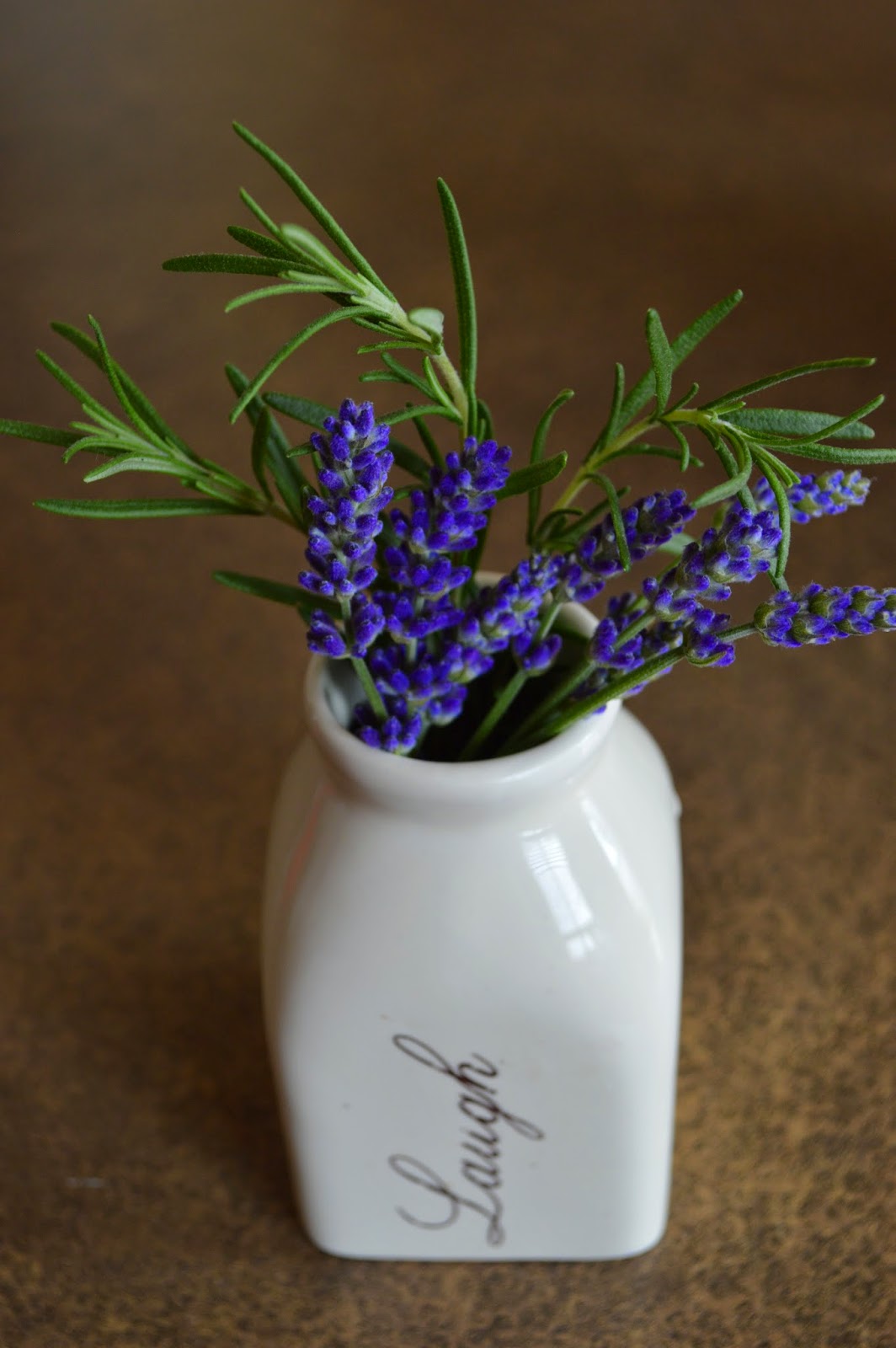 Now, the fun thing about swapping recipes is that you get to put your own little twist on them, whether it's changing up the recipe, the presentation, and so on.  This time, I got literal with the twisting.  This herby number seemed perfect to me to make into a pretzel! 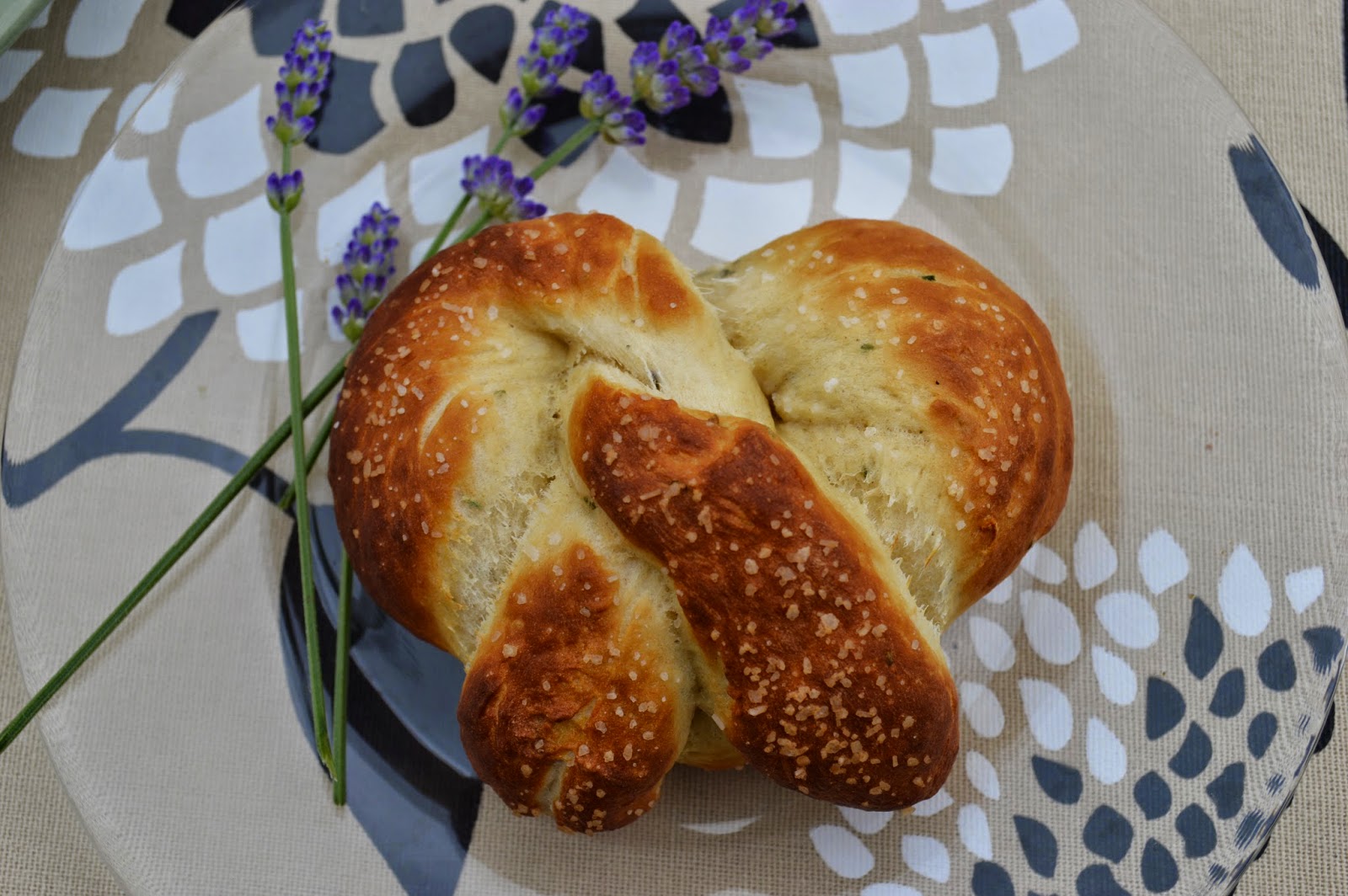 Homemade pretzels are just about the best thing since...well, sliced bread. I actually like them a lot better than sliced bread.  Unless it's a good rye bread.  Ooh, or a sweet bread...

But I digress.  Back to the pretzels!

Melissa used a bread maker to mix her dough, but while I'm pretty sure I own a bread maker, I couldn't tell you where it might be right now...haven't used or seen it in ages.  What I do have, however, is my handy dandy, trusty not rusty Kitchen-Aid stand mixer.  So, I got the dough hook ready and set to work.

First, I measured out 2 1/4 teaspoons of yeast, which is the same as one packet.  Then I put that in the mixer bowl along with a half cup of warm water and a quick light sprinkling of sugar (half a teaspoon or so), to give those little yeast organisms some fuel.  The water temp is pretty important when you're working with yeast.  Too hot, and you'll kill it.  Too cold, and you won't wake it up.  My thermometer-free trick is simple science.  The best temp for yeast is right around 110 degrees Fahrenheit.  Normal body temp is around 98.6 degrees.  So, if I run the water and it feels cool, I know that it is probably below 98 degrees.  If it feels warm to my touch, but tolerable and not at all scalding, I know I'm in the right range for yeast. 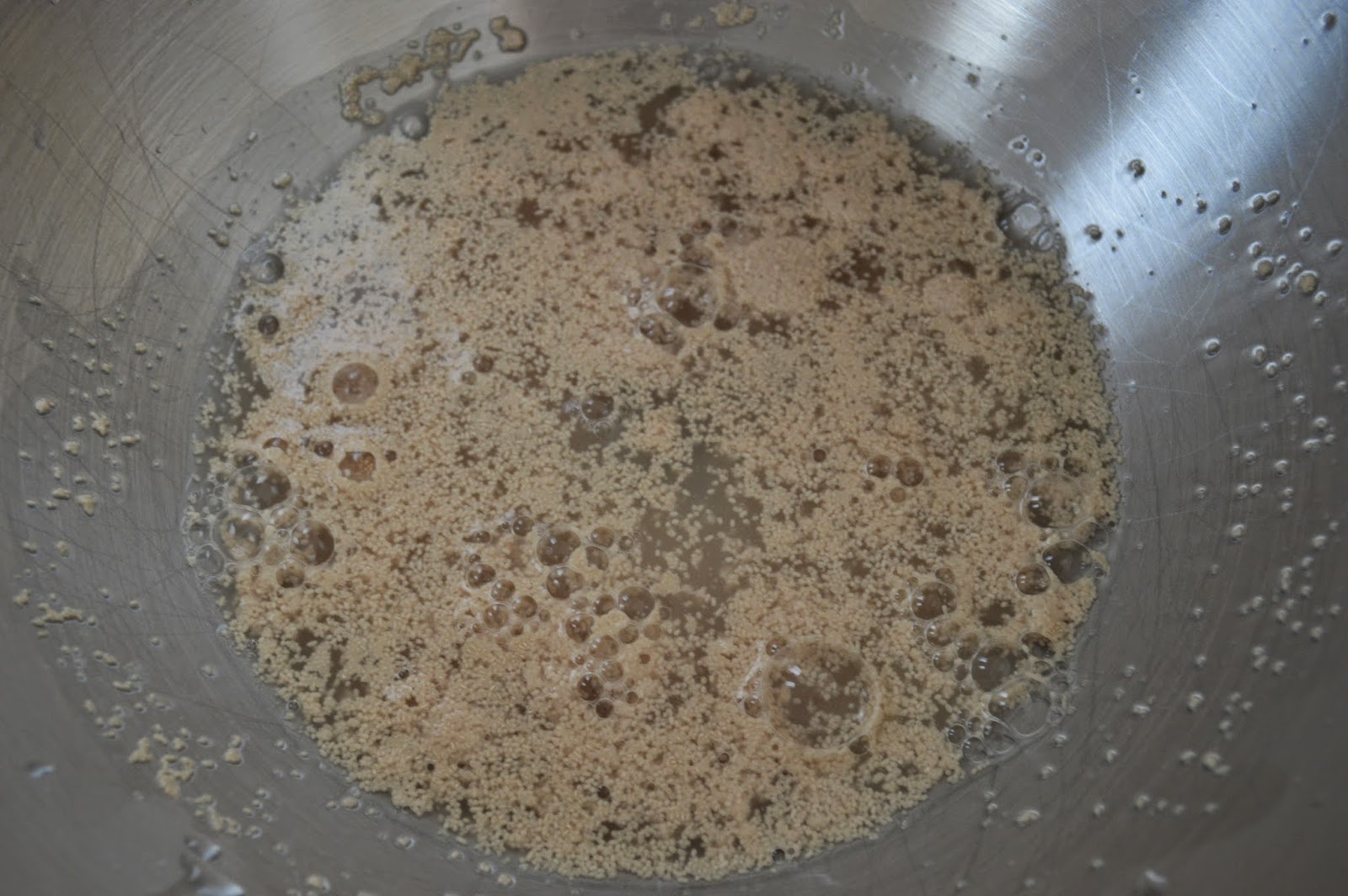 After combining the yeast and water and that touch of sugar, I let it sit for 10 minutes, until it got nice and bubbled up.  Then I moved it to the mixer stand, set my dough hook in place, and got to work.  As I slowly ran it on low, I added in 3 cups of flour, 1/2 cup of soured milk (regular milk with a splash of white vinegar), 4 tablespoons of sugar, one egg, a teaspoon of salt, some freshly chopped rosemary and lavender flowers from my garden, and the zest of a lemon.  Then I cranked up the speed a bit to let it knead the dough for me for about 5 minutes or so. 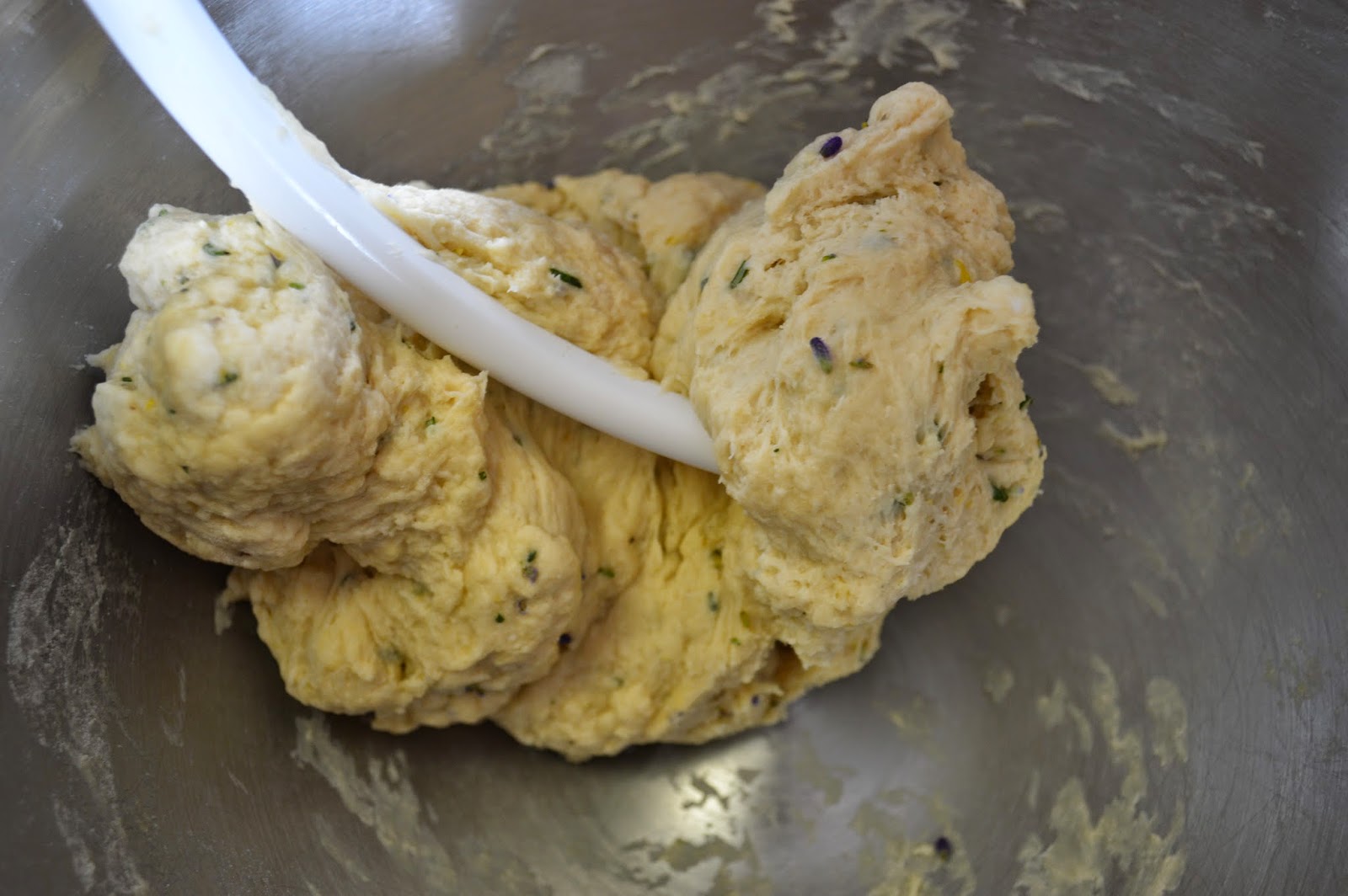 I skipped out on the butter in Melissa's recipe here in order to keep the dough a little more of a pretzel dough consistency, and also because I like slathering my pretzels in butter when they're done baking...a la Auntie Anne's. 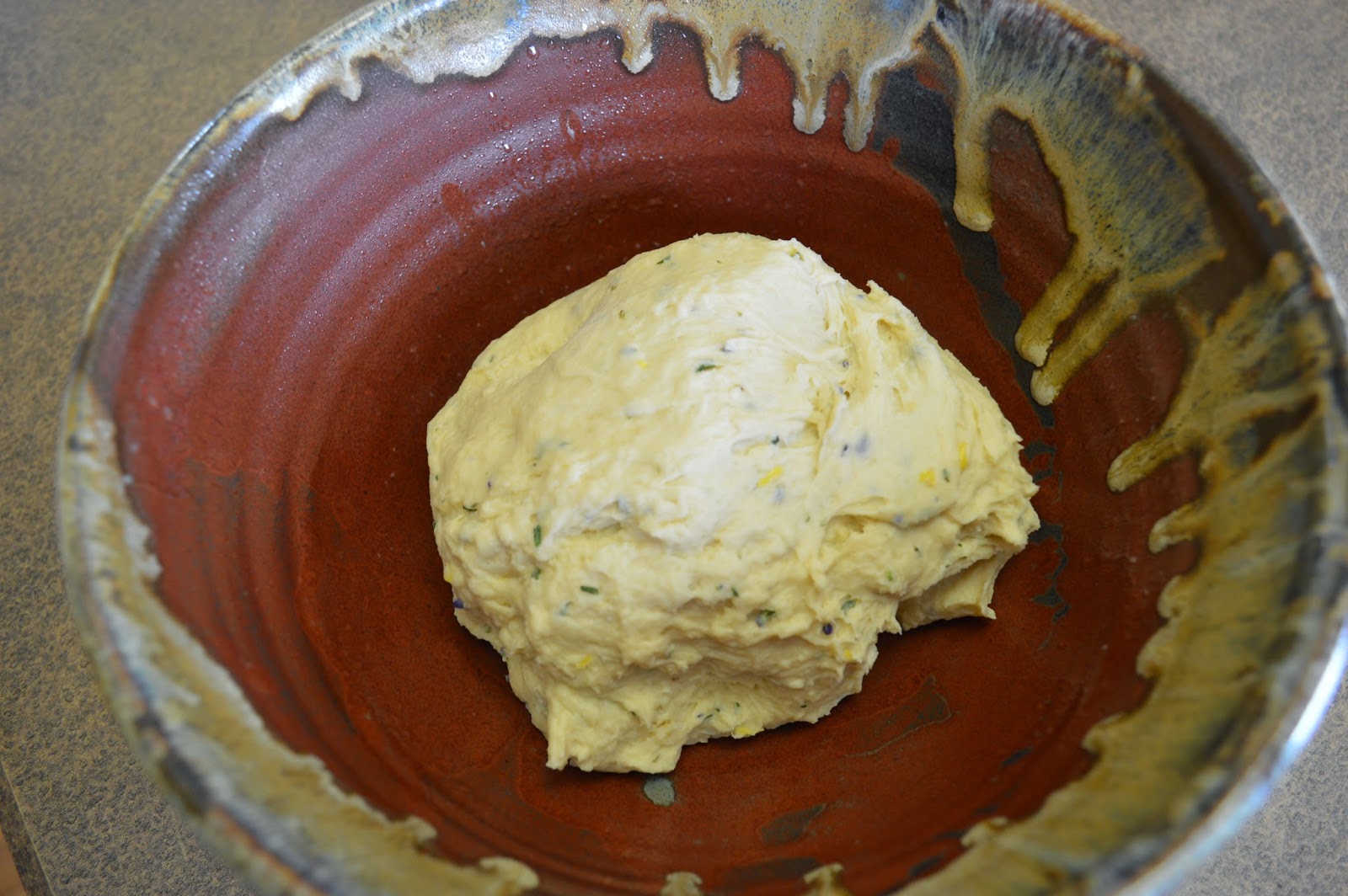 After the kneading, I transferred the dough ball to a greased bowl, covered it with a tea towel, and left it to rise in my warm kitchen for an hour. 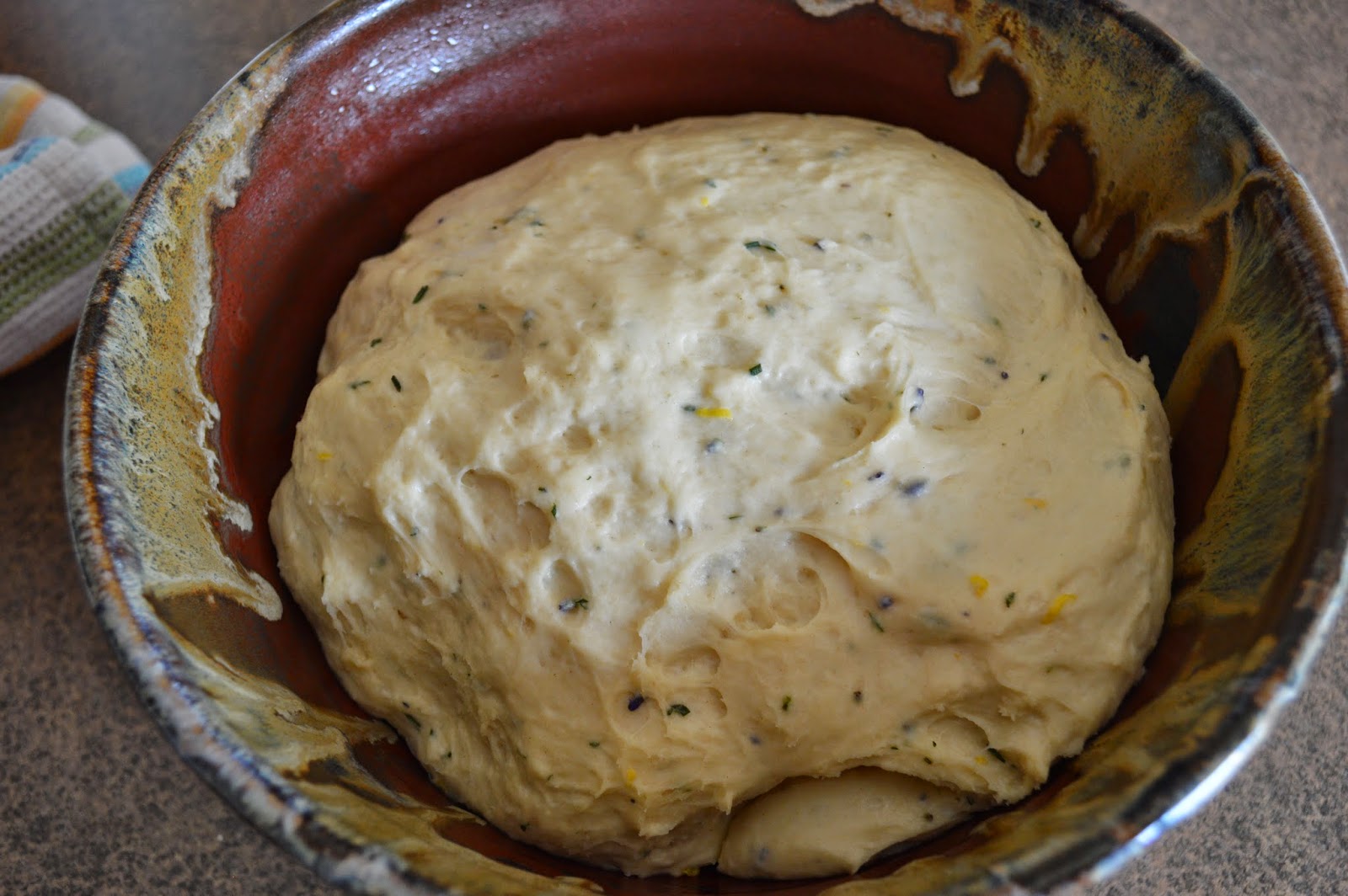 After the hour, I put on a kettle of water to boil (yes, for this recipe, you'll see!), preheated the oven to 475 degrees Fahrenheit and then separated the dough into 8 equal (well, close to equal) balls. 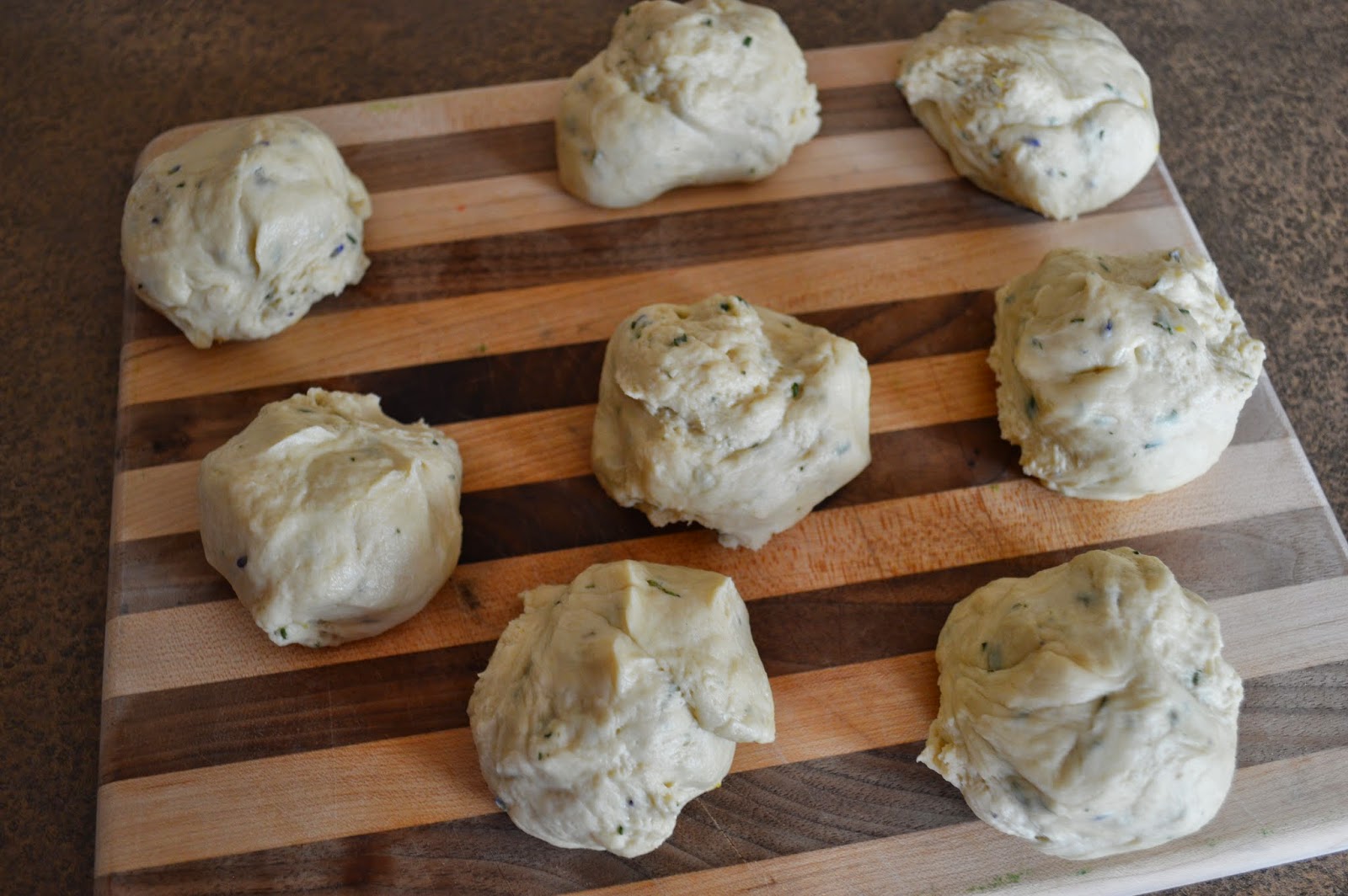 I also grabbed a baking sheet and covered it with parchment, then gave the parchment a quick spray of coconut oil.

Once the water came to a boil, I took a shallow dish and combined 2 tablespoons of baking soda with a cup of the boiling water.  This soda bath is what gives pretzels that nice browned crust.

I took each ball of dough and rolled it out into a long snake. 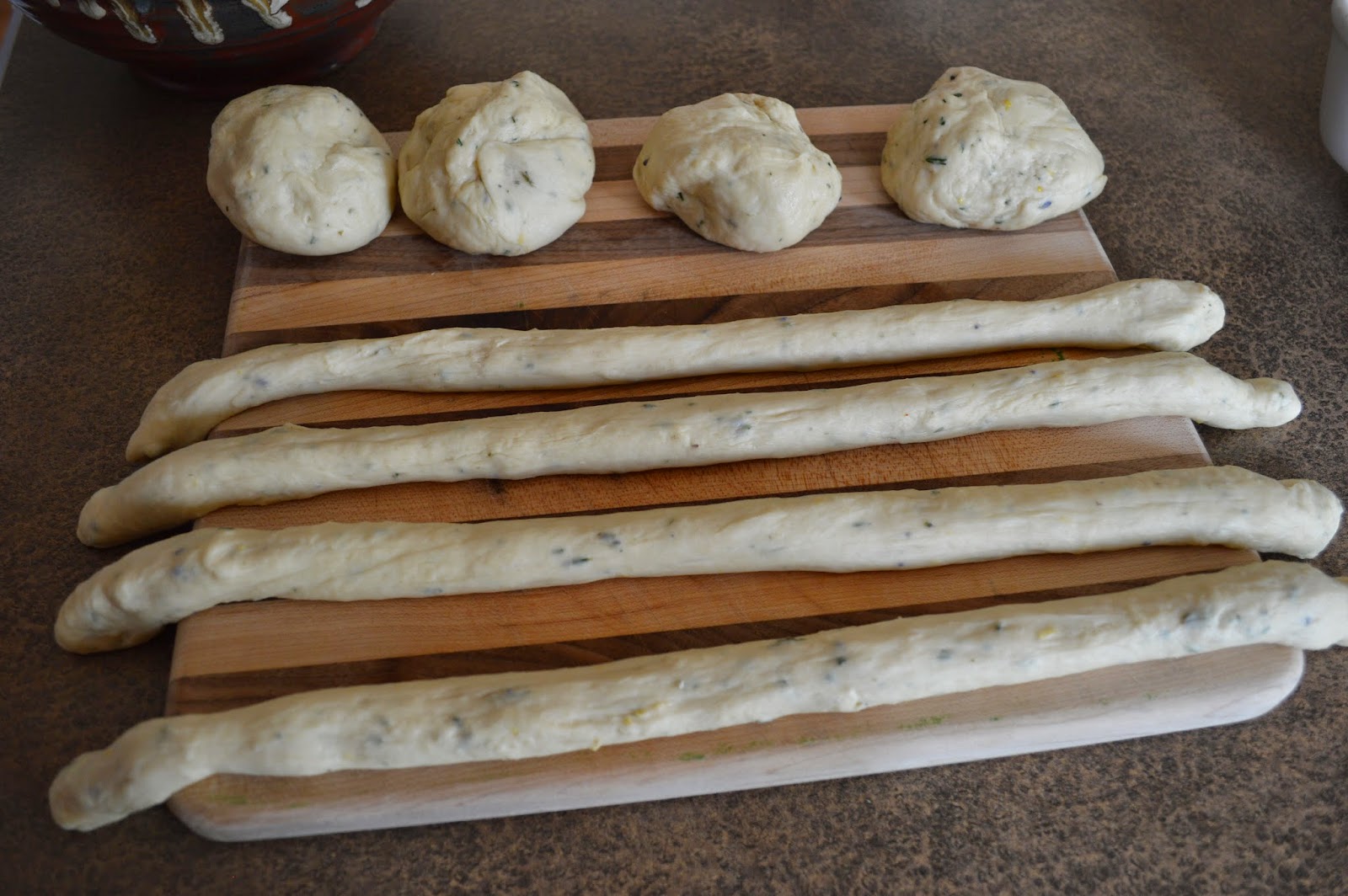 Then I made the snakes into pretzels.  It's easier than most people think.  Just make a big "U" shape... 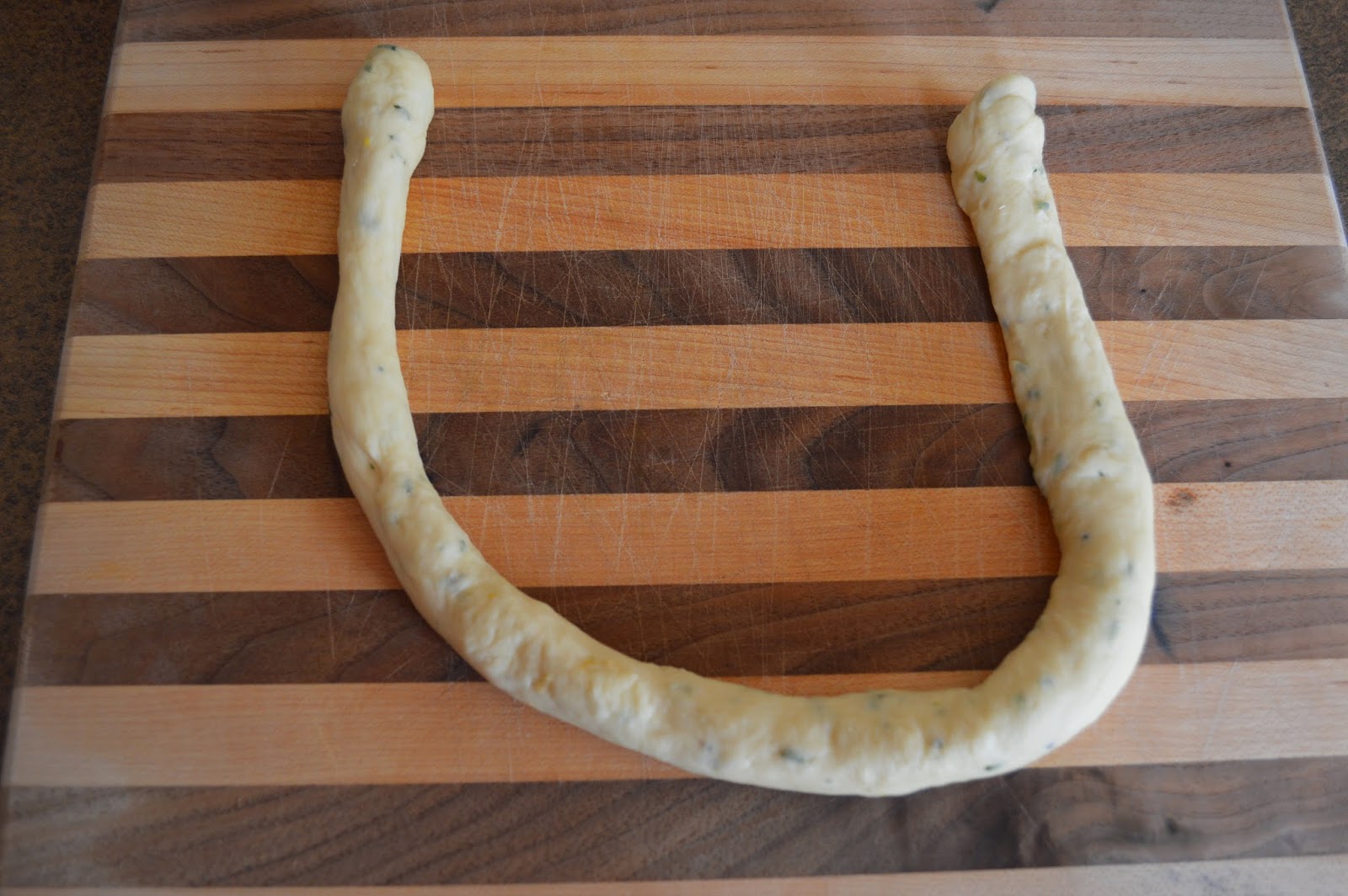 Then grab the ends and give them a couple of twists... 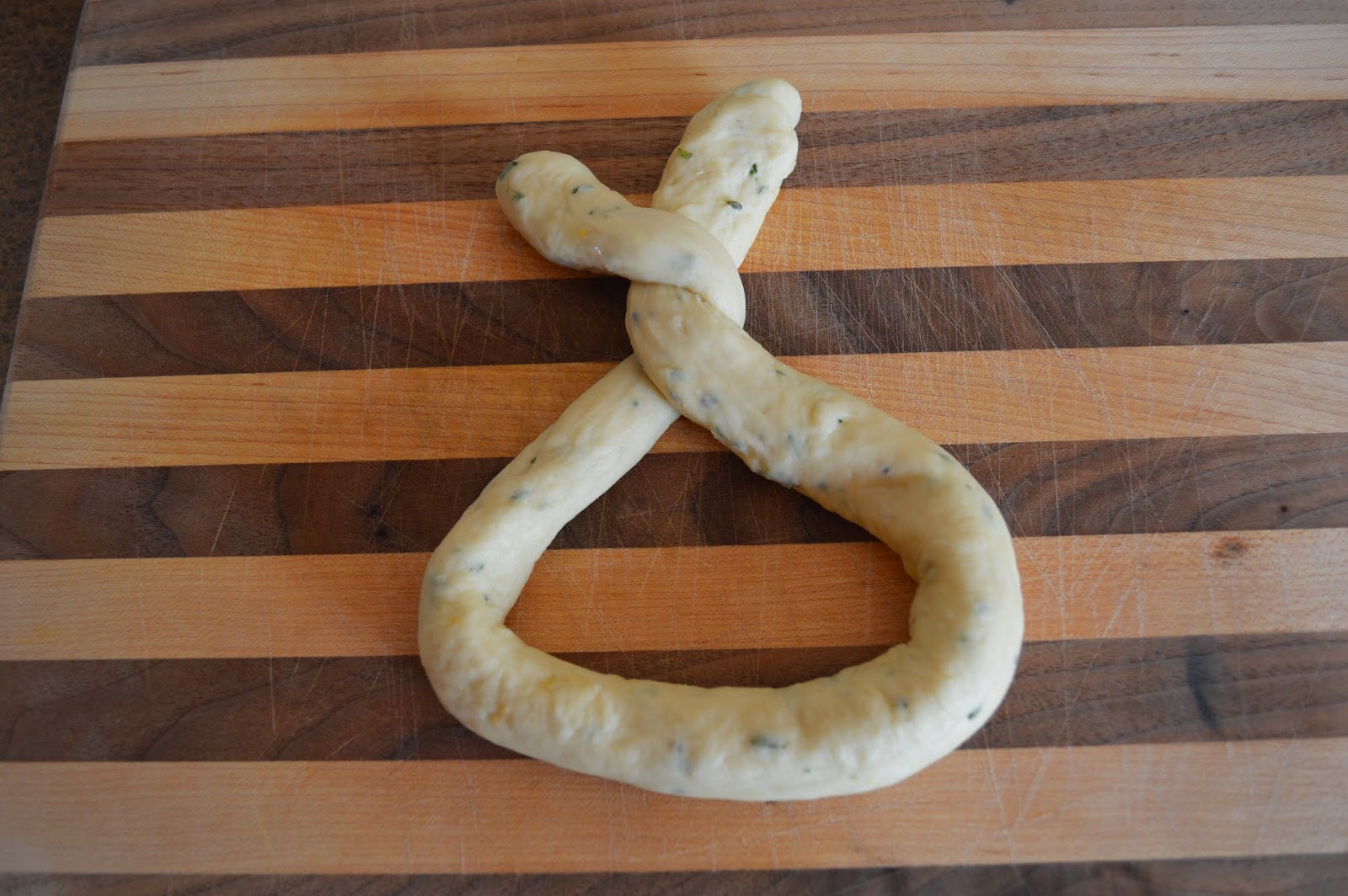 Then bring the ends back down to the bottom of the "U".  Tah dah!  Pretzel! 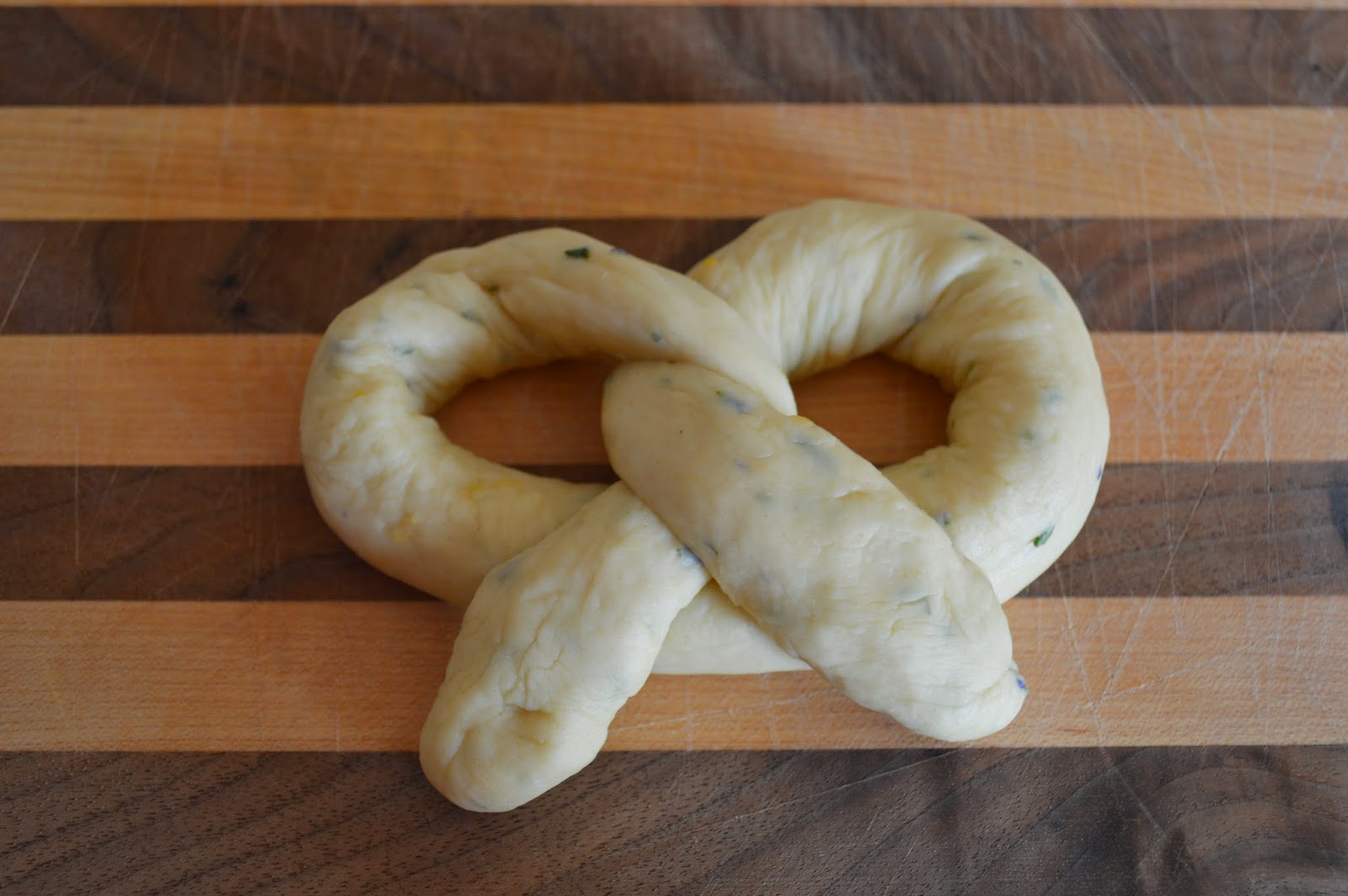 After the pretzels are shaped, I submerged them in the baking soda bath for 2 minutes each, spooning the liquid over the pretzels as I went.  You can do a few at a time, but make sure they have their own room in the dish, so that they don't touch each other. 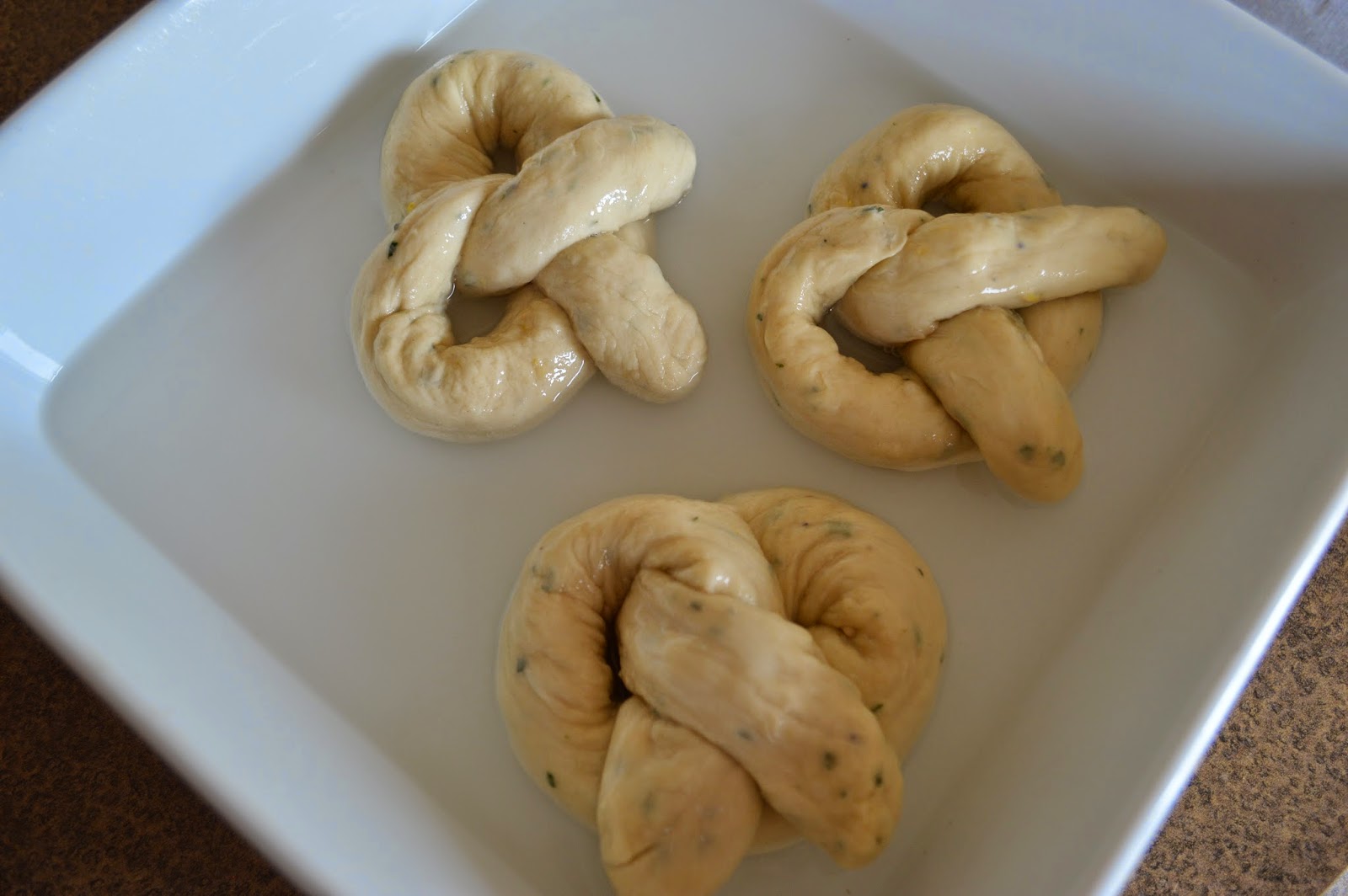 After the 2 minutes, I moved them to the prepped baking sheet.  Then I repeated the whole process with the remaining pretzels. 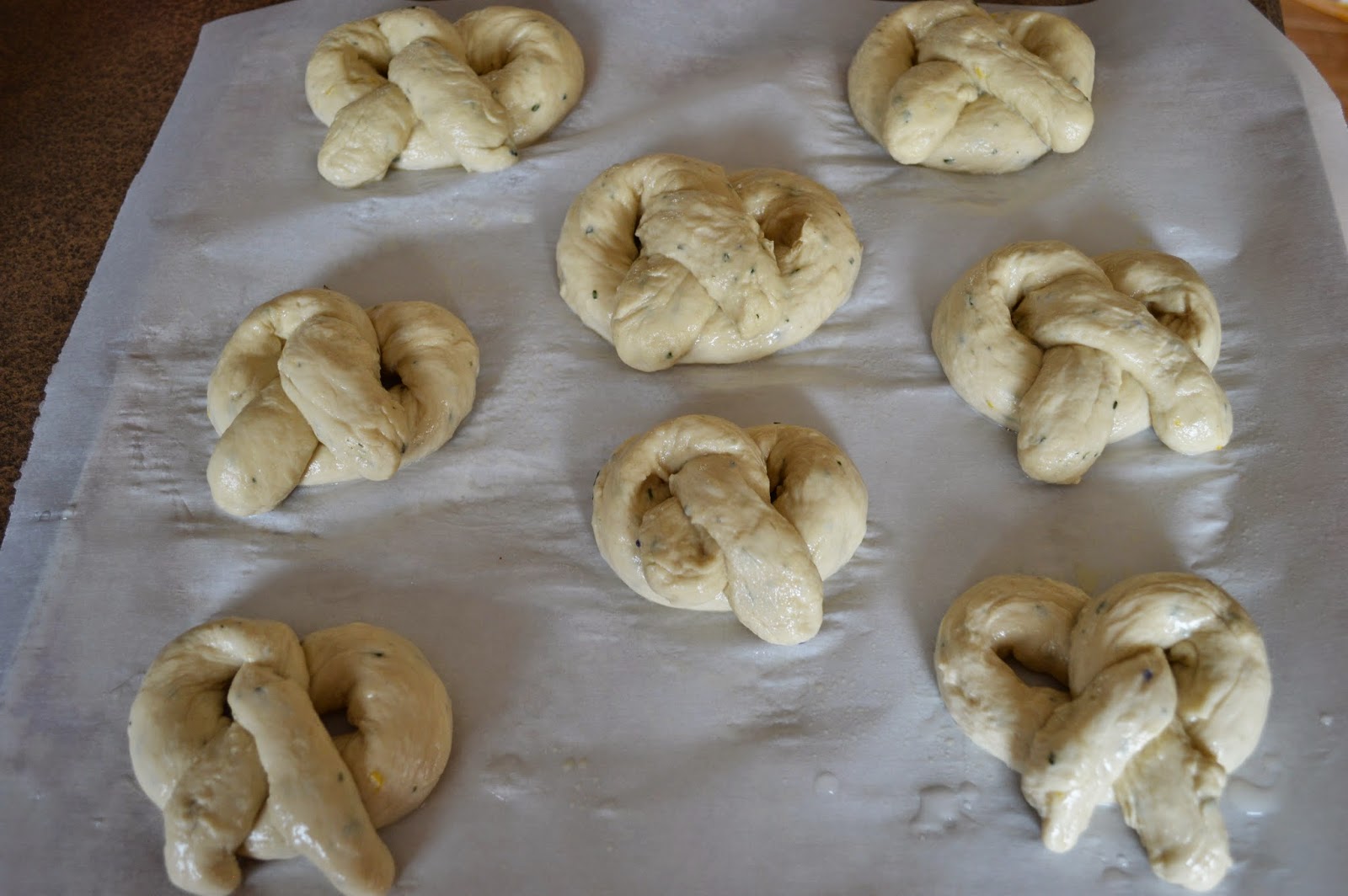 I gave the lot a sprinkle with kosher salt. 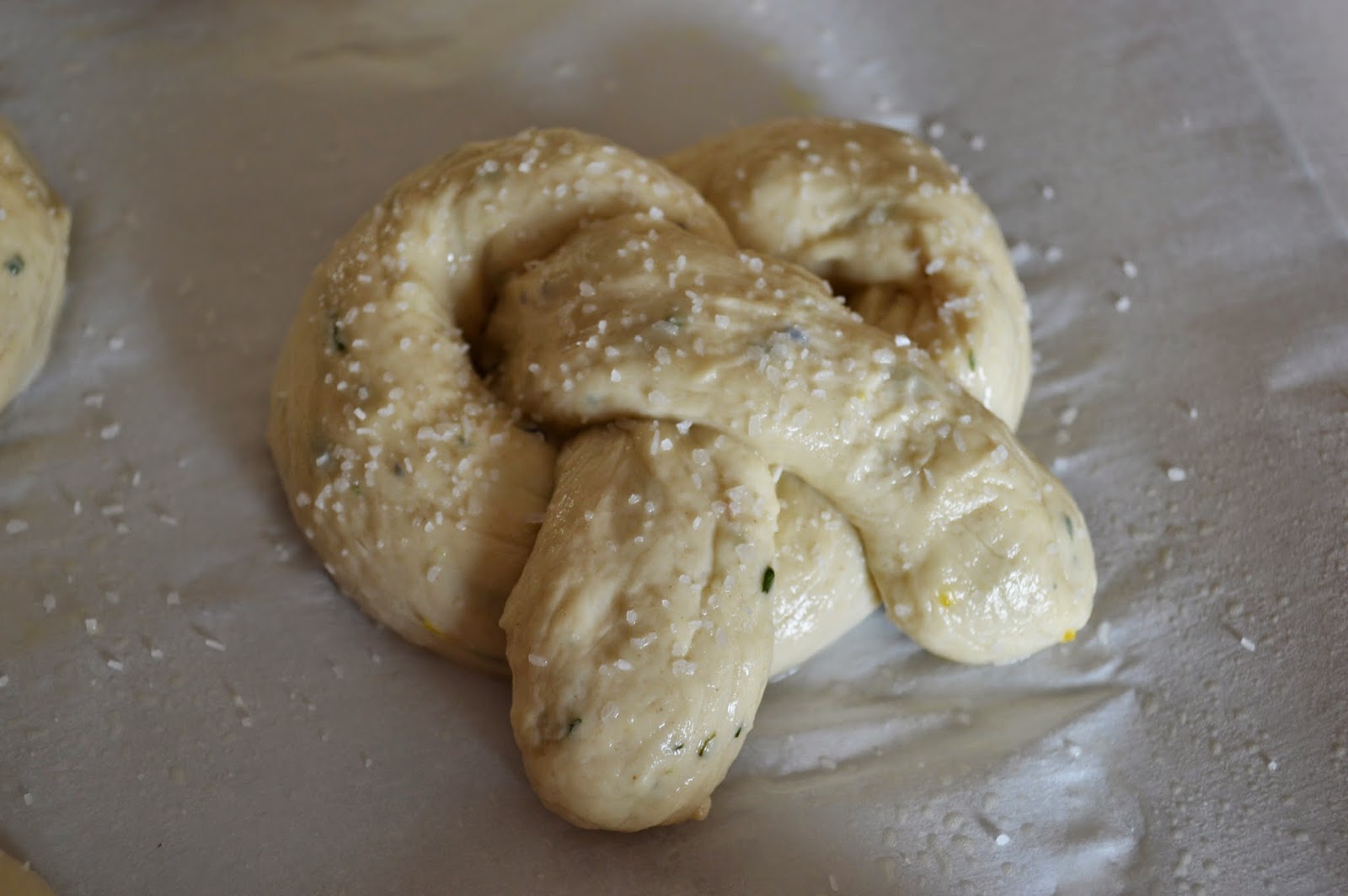 Then I put them in the oven for 9 minutes.  Your oven temp may be a little different, but in the 8-10 minutes range should be good for browning them up and cooking them all the way through to a nice soft pretzel chew. 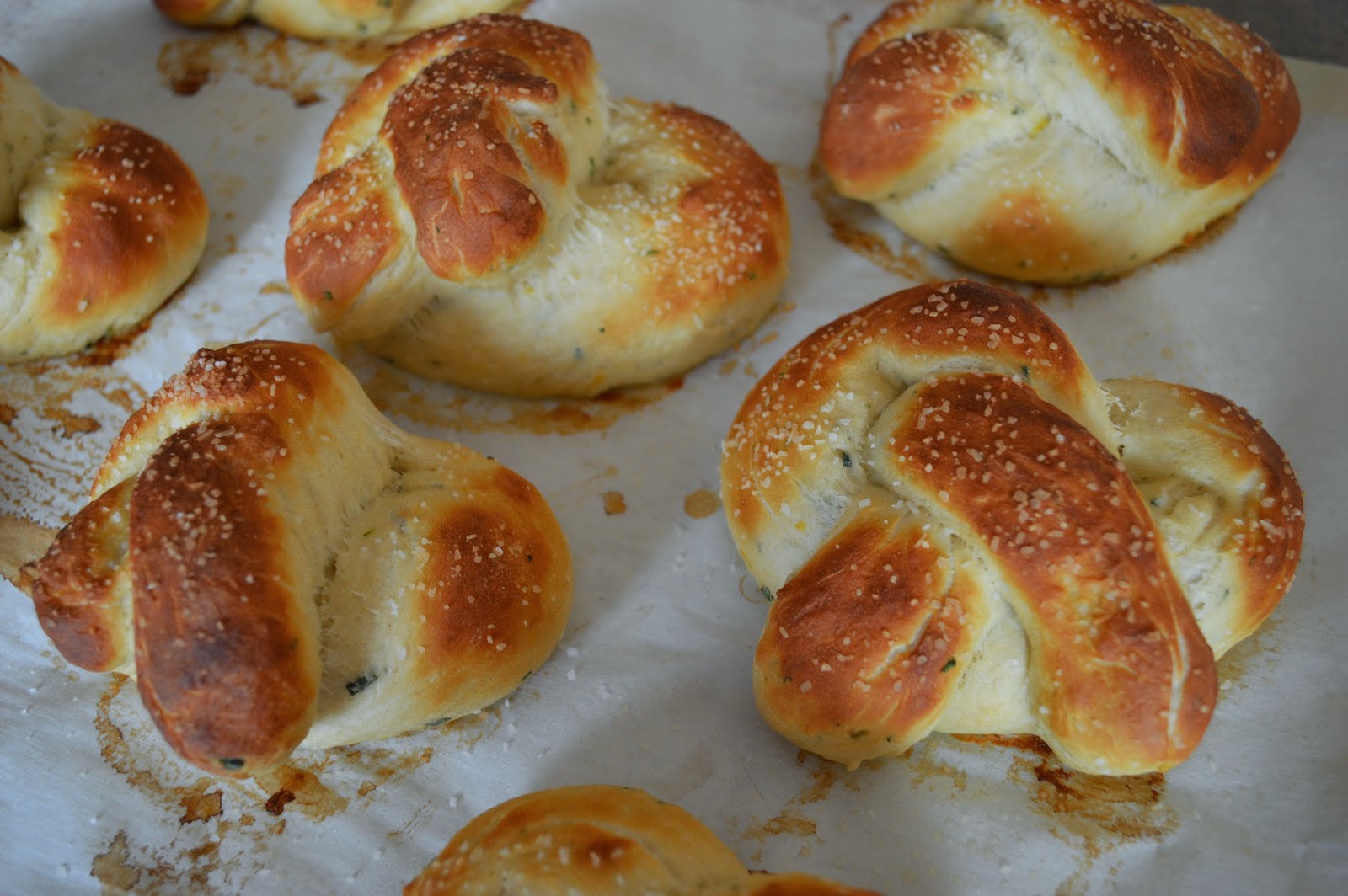 The smell of these pretzels...oh my my.  Heavenly. 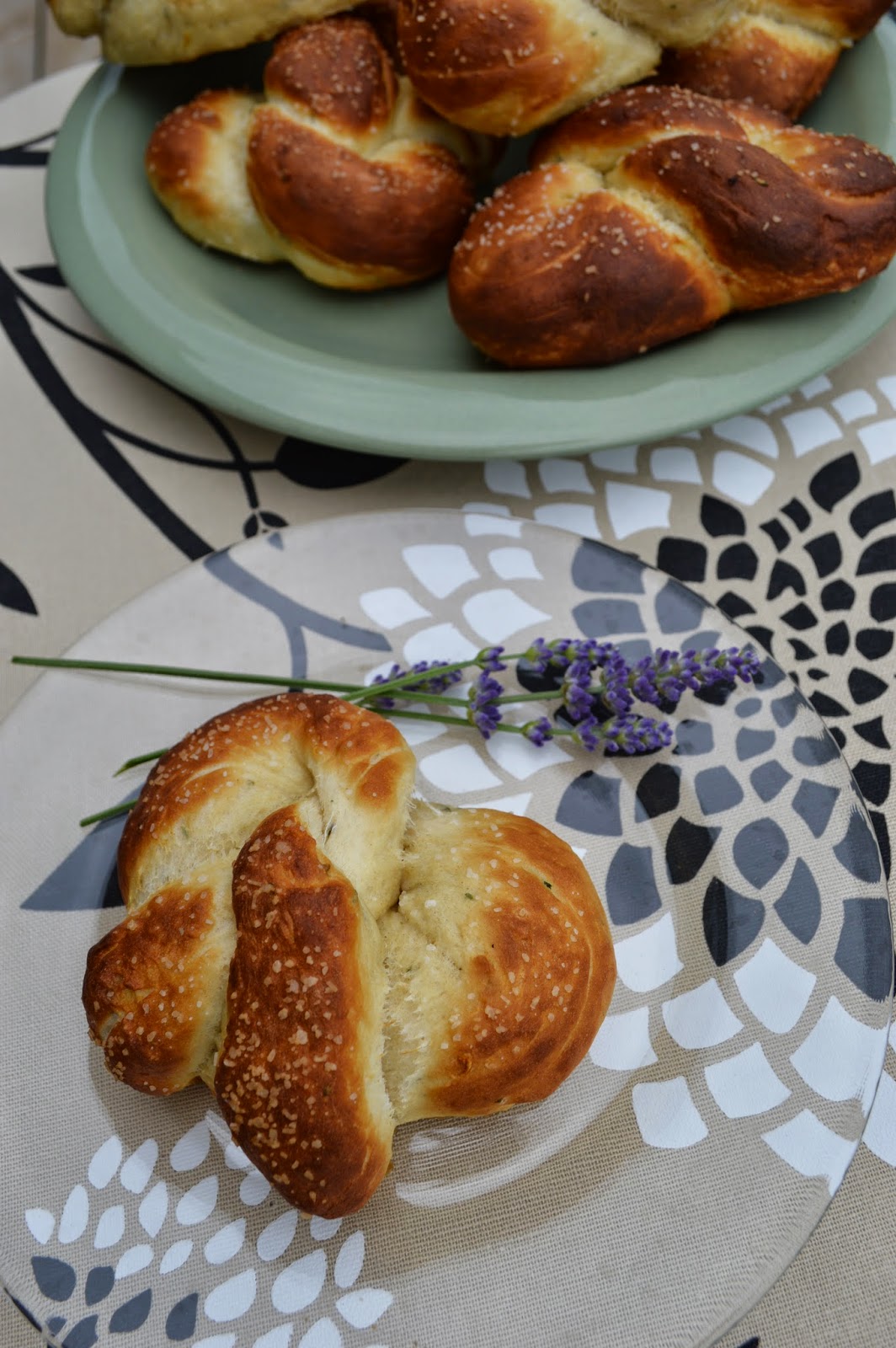 And the taste?  Again, heavenly.  The lemon zest hits you first, followed quickly by the rosemary, and then chased with the lavender end notes.

Honestly, these smelled so intriguing that I totally forgot about slathering them with melted butter when they came out of the oven, and they don't need it at all.  The flavors stand on their own.  Fantastic! 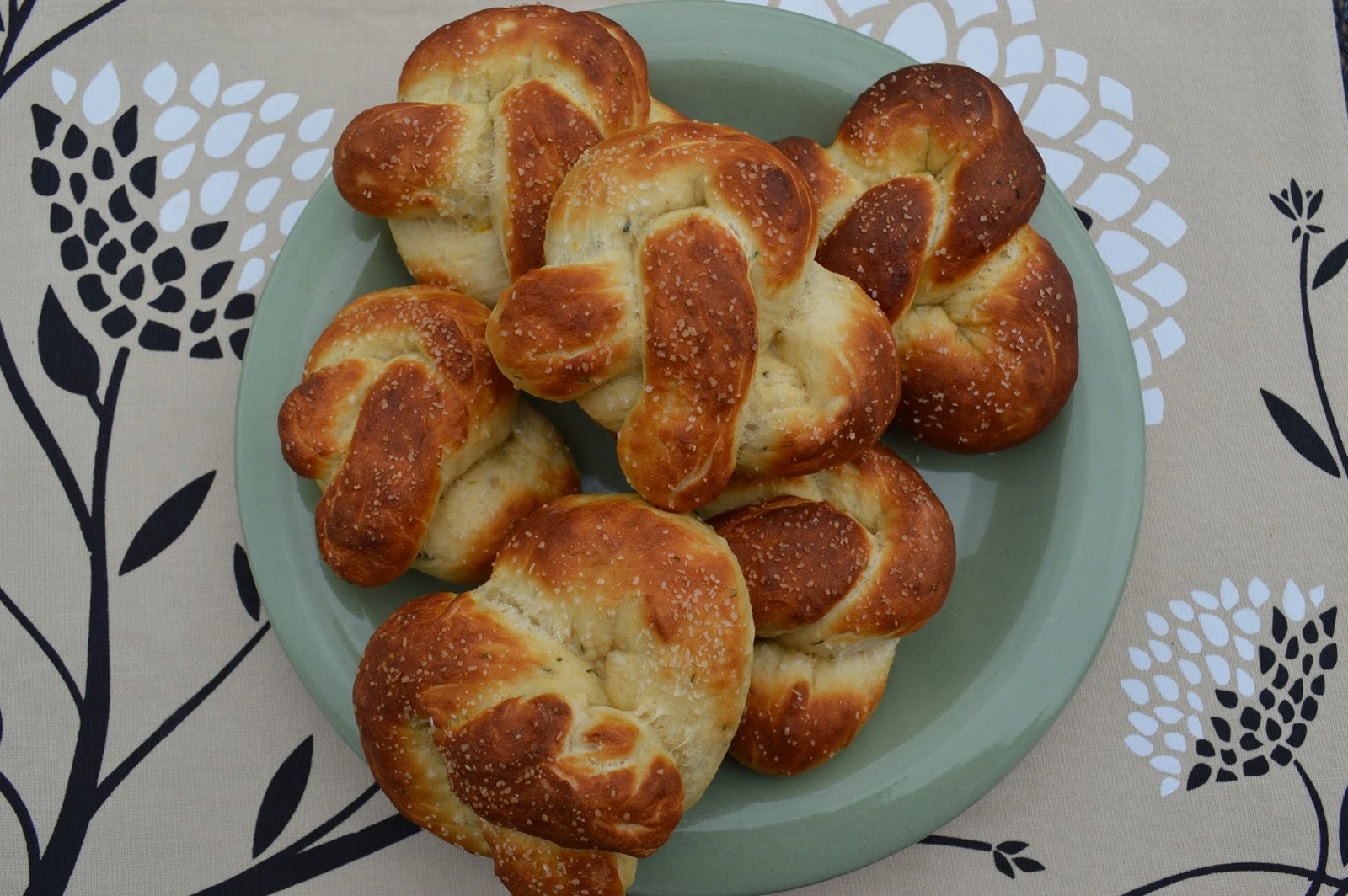 Be sure to check out Melissa's original recipe on The Front Porch Gourmet!  Any dinner would feel special with those rolls.  And I'm already thinking the flavor combination would make for good bagels as well!  I'm so thankful for the opportunity to switch things up with another foodie blogger like this, and especially one with such great recipes to work with!