Rhubarb is an amazing thing to have in your garden.  It comes back bigger and better every year, and the more you use it, the more you will get.  It's one of the first edibles to sprout in the spring, and mine tend to produce well through summer into fall.  The rosy red stalks make me smile, and I love sneaking their aggressively tart flavor into treats of many sorts.

Come springtime this year, my inbox suddenly was filled with rhubarb inspired drinks, and that made me go into mad scientist bartender mode.  I looked at a few and then decided that they weren't quite what I wanted, so I set about making my own Rhubarb Ginger Liqueur. 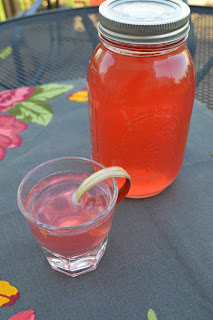 First off, I chopped up a bunch of rhubarb from my garden, as much as my first harvest held, which was about a pound and a half.

Then I made a quick simple syrup by heating a half a cup of sugar with a quarter cup of water until the sugar dissolved.

I took a big jar and put in the rhubarb, the simple syrup, 3 cups of vodka, and a half cup of ginger liqueur.

Put the lid on, give it a good shake, and let it sit at room temperature, shaking daily, for about 2 weeks, until the rhubarb has released all of its color into the liqueur. 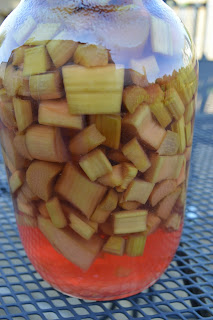 Then I strained it through a fine mesh strainer and bottled it up to store. 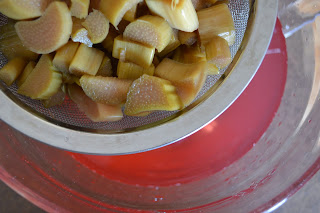 But whoops!  It couldn't all fit in the jar I chose, so I had to sample it in a little beverage.

Take the rhubarb ginger liqueur, top it off with some tonic, and BOOM: Rhubarb Vodka Tonic.  I garnished mine with a little rhubarb twist from harvest #2 for the year. 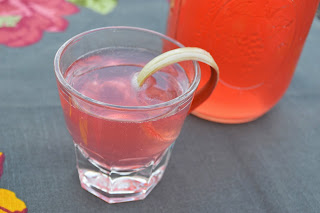 It's tart and sweet and everything that I love about rhubarb, with the smallest hint of ginger to keep things interesting.  And that color...so bright and cheery!

Cheers to spring, my friends!
Posted by Krasimom at 8:21 AM