It's been a while. I'm sorry about that. Life has been hitting hard, and actually reality has been taking priority instead of the blogosphere.

But I'm back, and I think you'll enjoy what I've got. You see, just because I haven't been blogging doesn't mean I haven't been cooking and creating! So, now I have a backlog of recipes to get out to all of you. But let's not get ahead of ourselves... 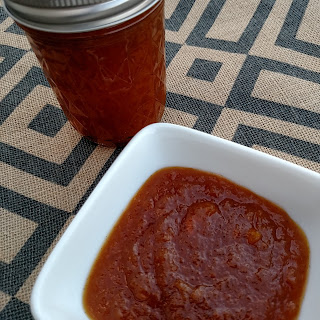 Today's recipe is one that I'm really thrilled with. Long story short, one of my littles was home sick today, and I got a little extra play time in the kitchen. I had seen a while back a picture of some pumpkin jam, and I found the idea intriguing. Today, my butternut squash called out to me instead, and I decided to throw in some vanilla beans, since I like the combo of vanilla and squash.

First, peel and gut a butternut squash. Then cool the flesh into small cubes. 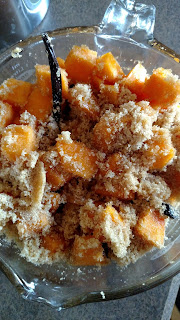 Toss the cubes with the juice of one lemon, two vanilla beans, sliced in half down the length, and 2 cups of brown sugar. Let that mixture sit for a couple of hours. 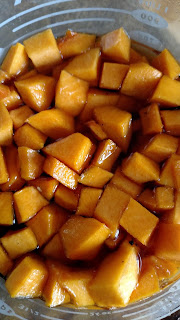 It should release juices and get nice and fragrant from the vanilla. When you're ready, transfer all of that to a pot. Over medium heat, bring it to a boil for about a half hour, until the squash is starting to break down.

Remove the vanilla beans (the seeds should already be all through the mixture), and blend it all with an immersion blender or carefully in a blender.

Return the jam to the heat to thicken it for a few more minutes.

Put the jam into 2 sterilized 8 ounce jars and put on clean seals. While the heat will seal the jars, I'm not entirely confident in its preserving safety on this one, so you might still want to refrigerate these. 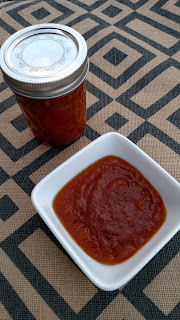 But no worries... Those jars won't last long!

The flavor is full-out fall, with a lovely sweetness. It's not overwhelmingly squashy, and if you didn't know how it was made, you might have a hard time believing that you were eating jam made from squash. It would be great on any bread that you would typically serve jam on, but I think it also would rock as a pancake topping, to roast chicken, or even in some creative mixed drinks!