Brownies That Can't Be Beet...Or Can They? 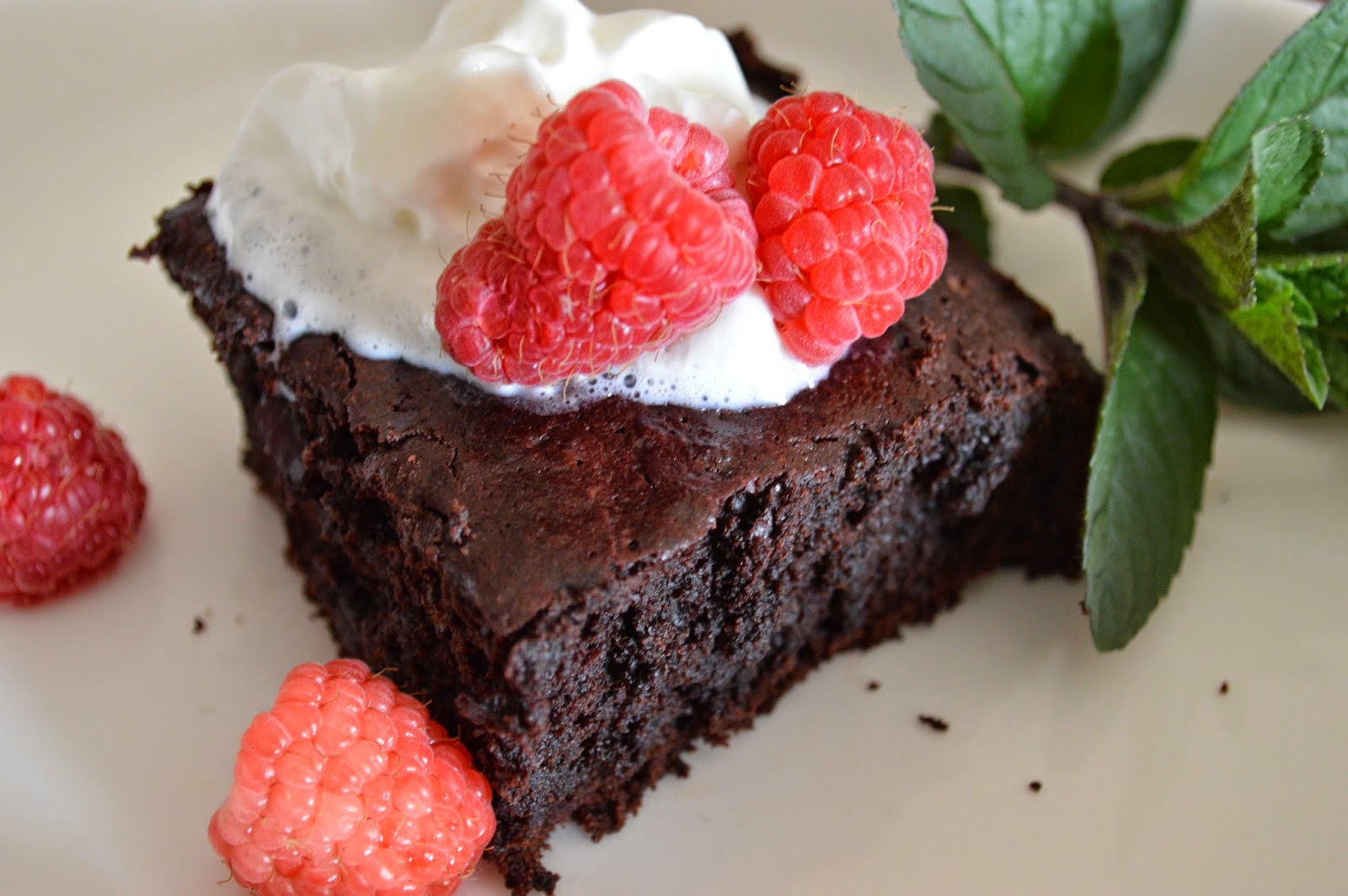 Do I have your attention?

Good.  I mean, it's hard (practically impossible!) to smell food over the web, but if you could, you'd be rushing to my kitchen right now for these brownies.  And I'd probably let you nosh down about 3 of them before I told you what was in them. 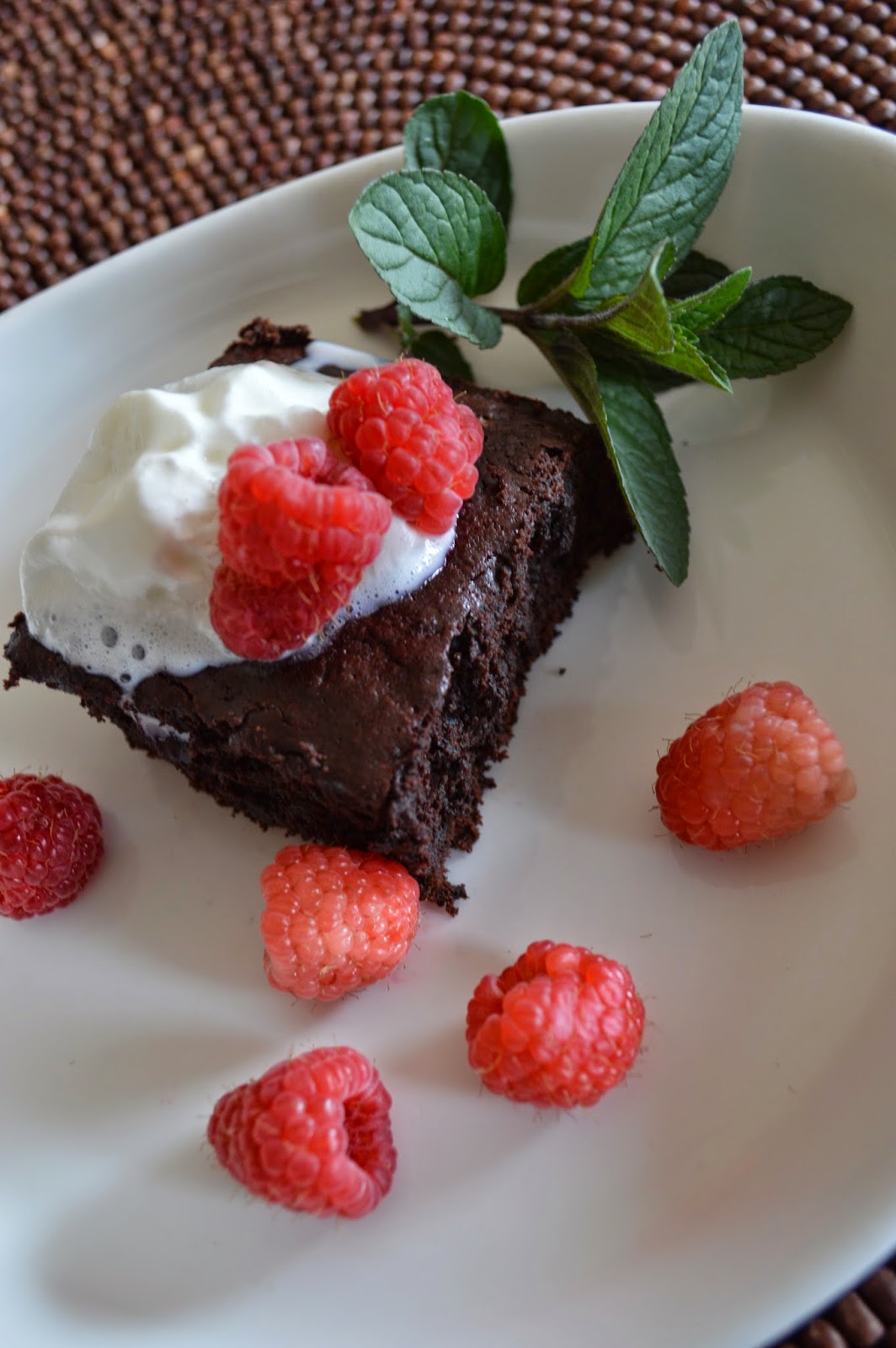 Bears, beets, Battlestar Galactica.  There, I said it.

Can you tell I'm in a goofy mood today?  Maybe I should just get to the recipe.  I've seen lots of versions, but most of them point back to this one from Vegetarianized, and that's the one I use, for the most part.  The biggest change is how I prep my beets.  And if you happen to have some frozen, roasted, pureed beets in your freezer like I usually do, even easier.  But I used up all my frozen beets already.  Boo.  Sooooo...

Roast some beets.  About a half pound of them, like three on the small/medium side.  Don't know how to roast beets?  Here you go: wash and scrub your beets, cut off the tops (makes them easier to peel), place them in aluminum foil (you can line it with parchment, like I do, if you're worried about aluminum touching your food), and pop them in the oven at 400 degrees for about 45 minutes or so. 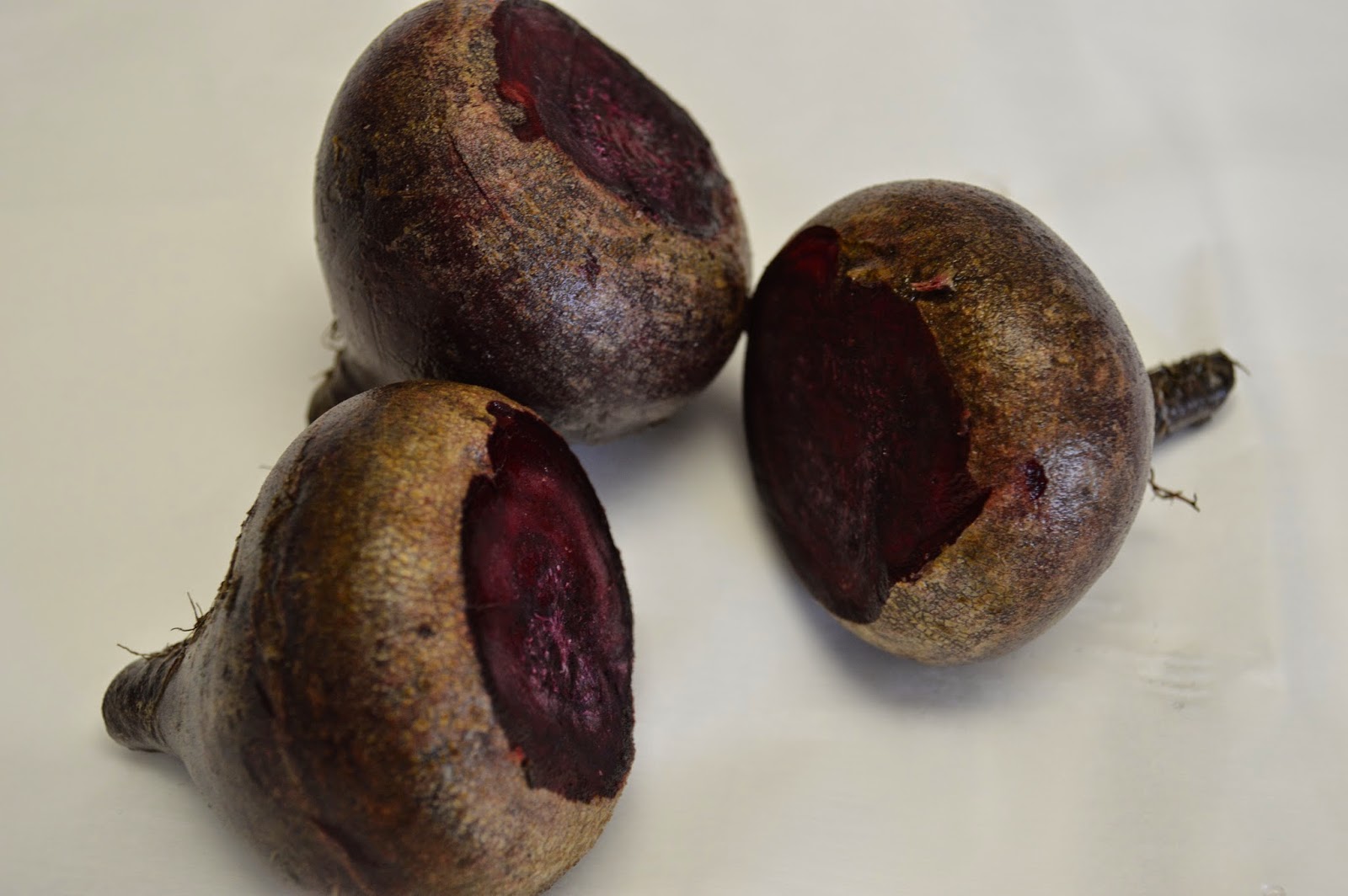 Roasting the beets really brings out their sweetness, which is a plus in a brownie recipe.  They are done when you can easily poke them with a fork and it slides right out. 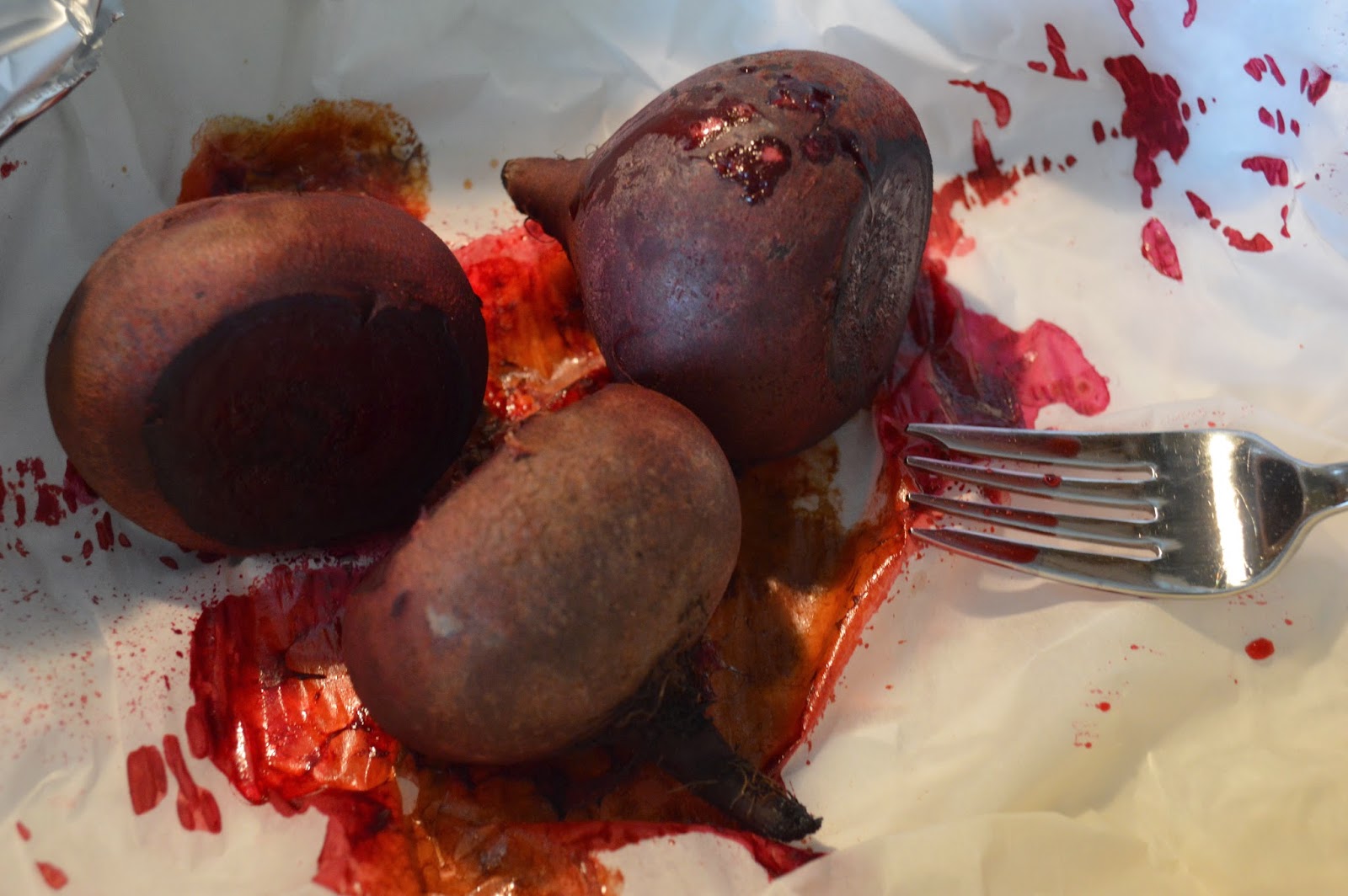 I use the parchment to rub the skins right off the beets.  Toss them in a bowl, and give them a good puree with an immersion blender (or you can use a potato masher, or a food processor...whatever, just get them mashed). 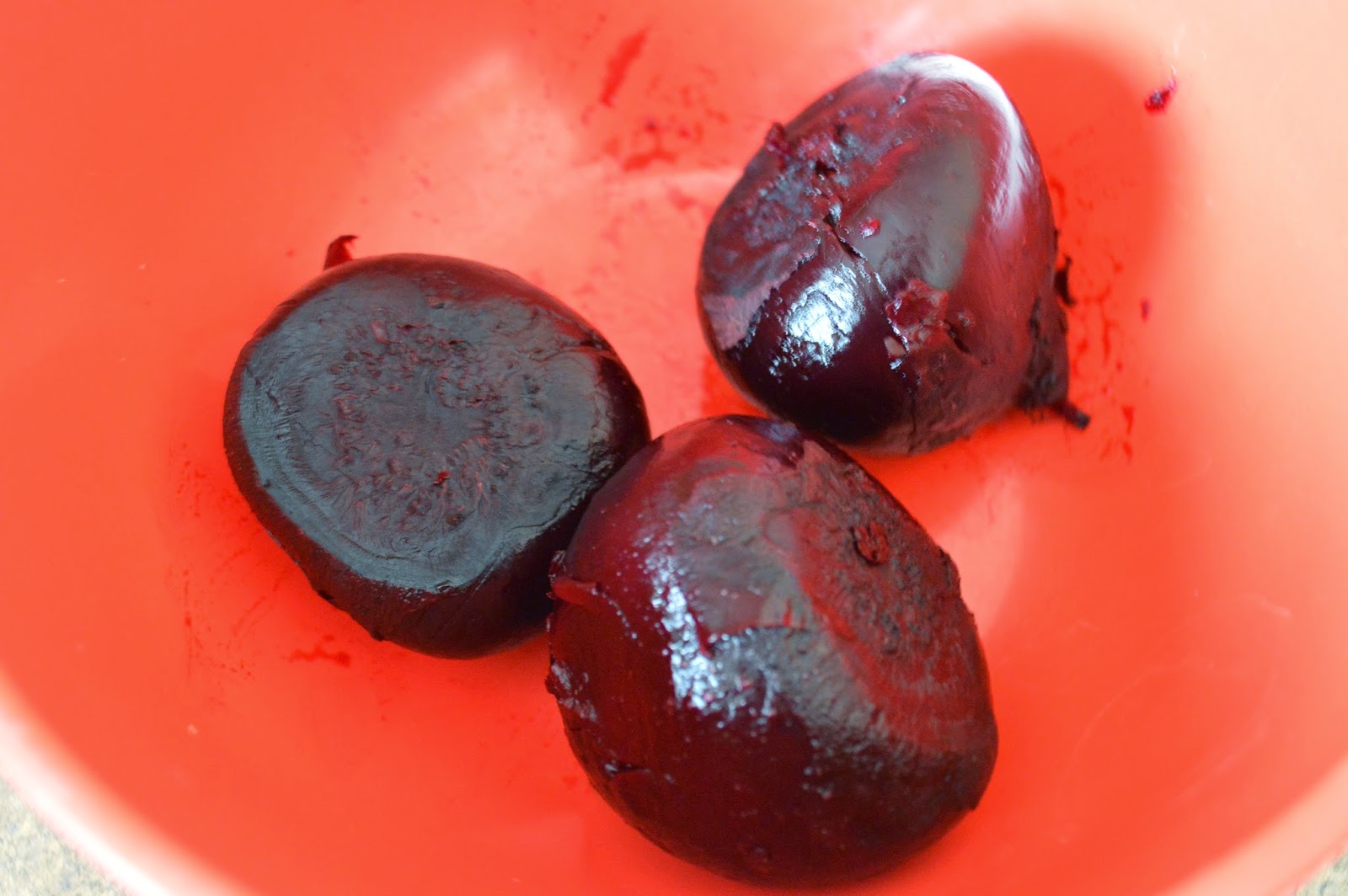 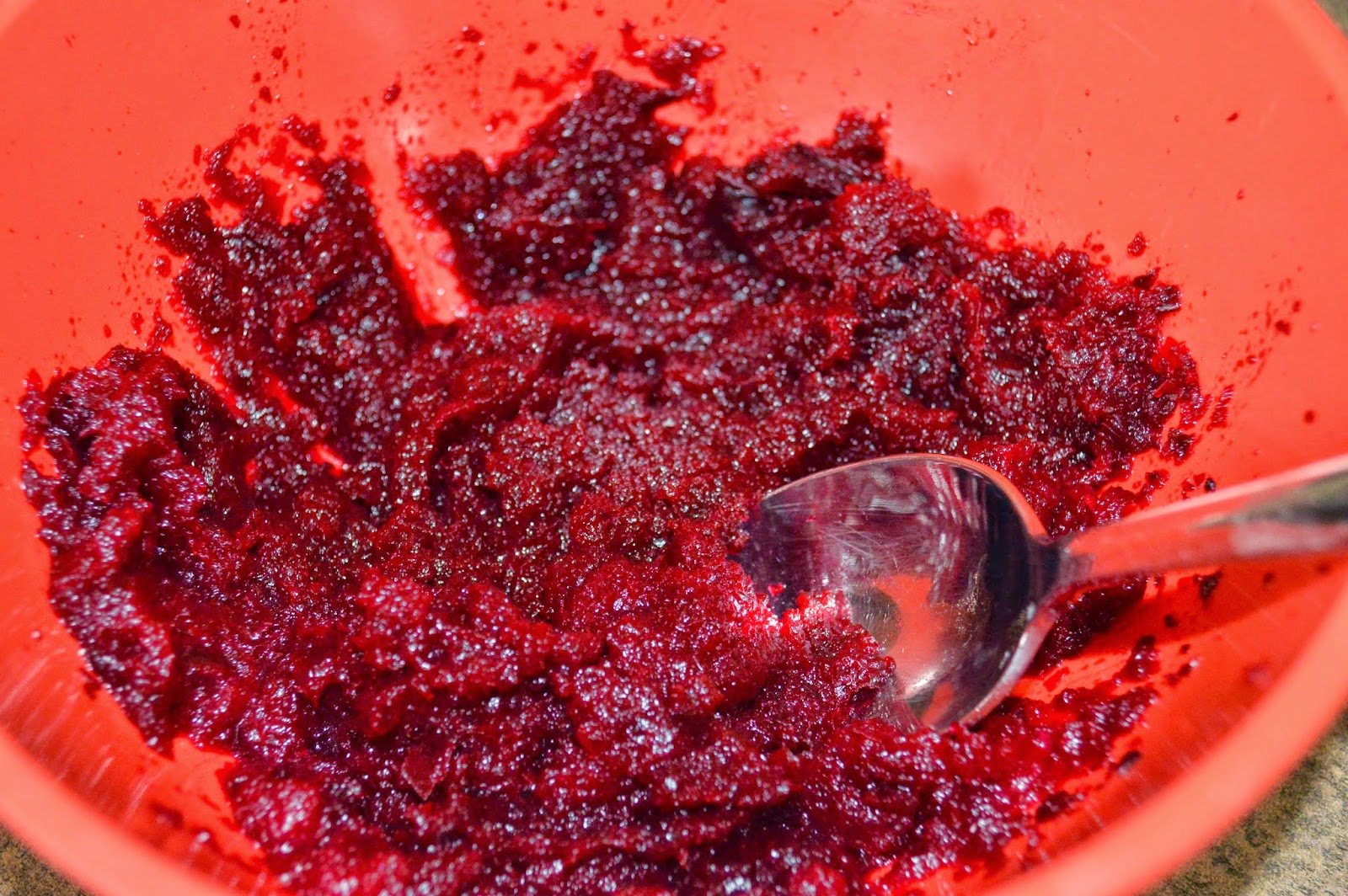 In a saucepan, melt 2 sticks of butter, then add 3/4 cup each of brown sugar and white sugar.  If you want a little extra richness, use Muscovado sugar.  Cook the mixture until the sugar dissolves, about 2 minutes.  Take it off the heat and set aside. 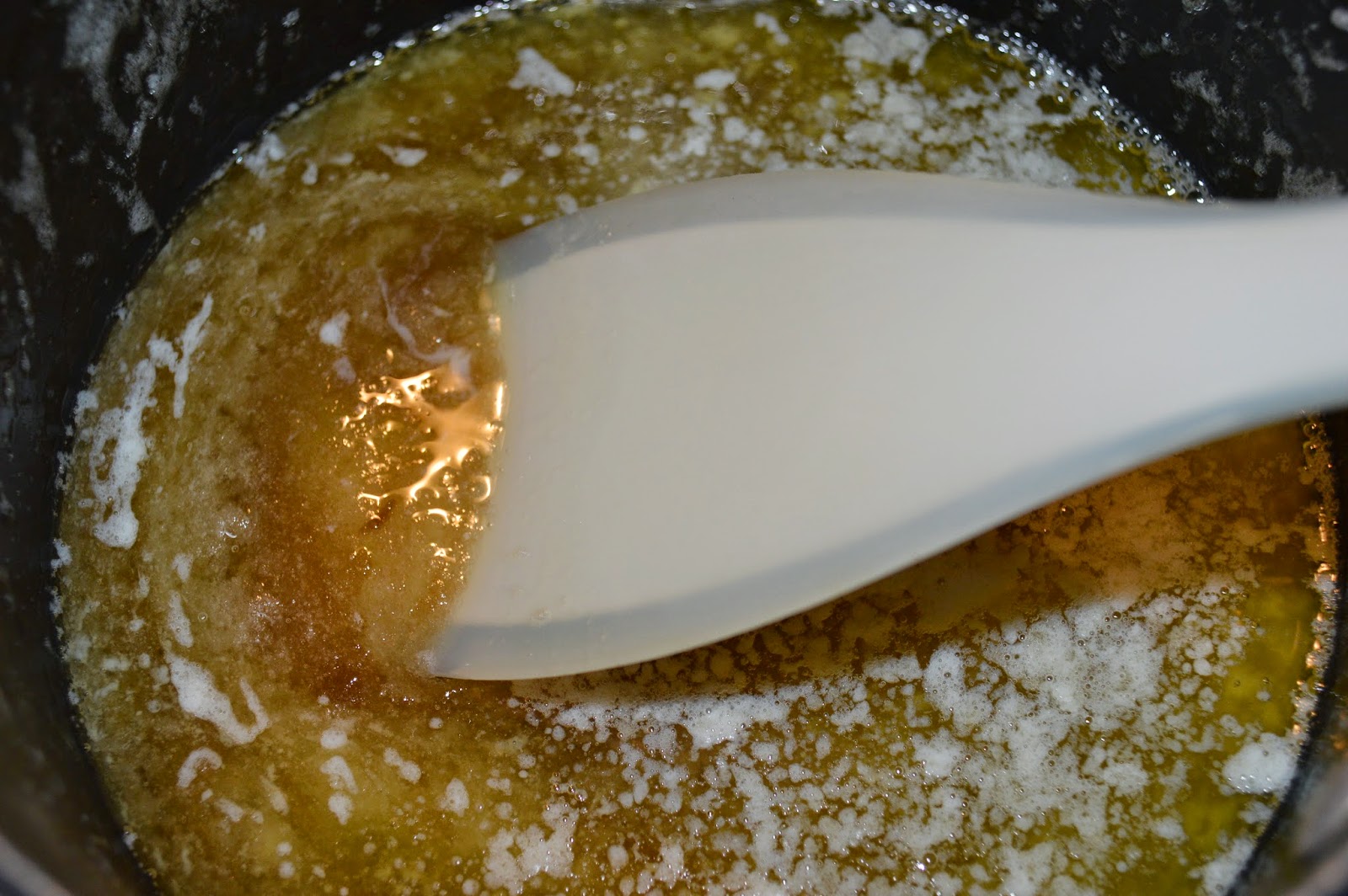 In a large mixing bowl, beat 4 eggs for a couple of minutes. 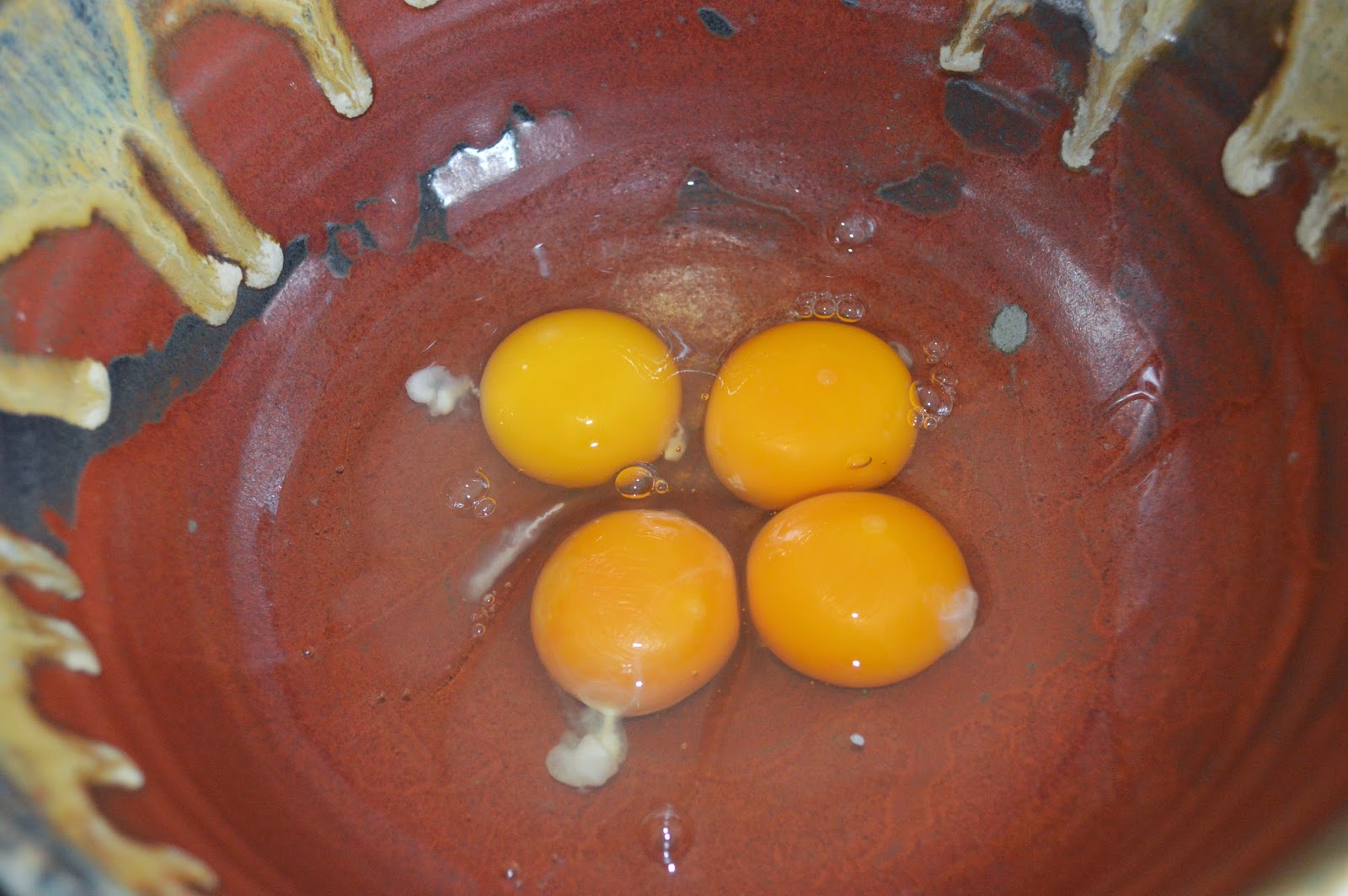 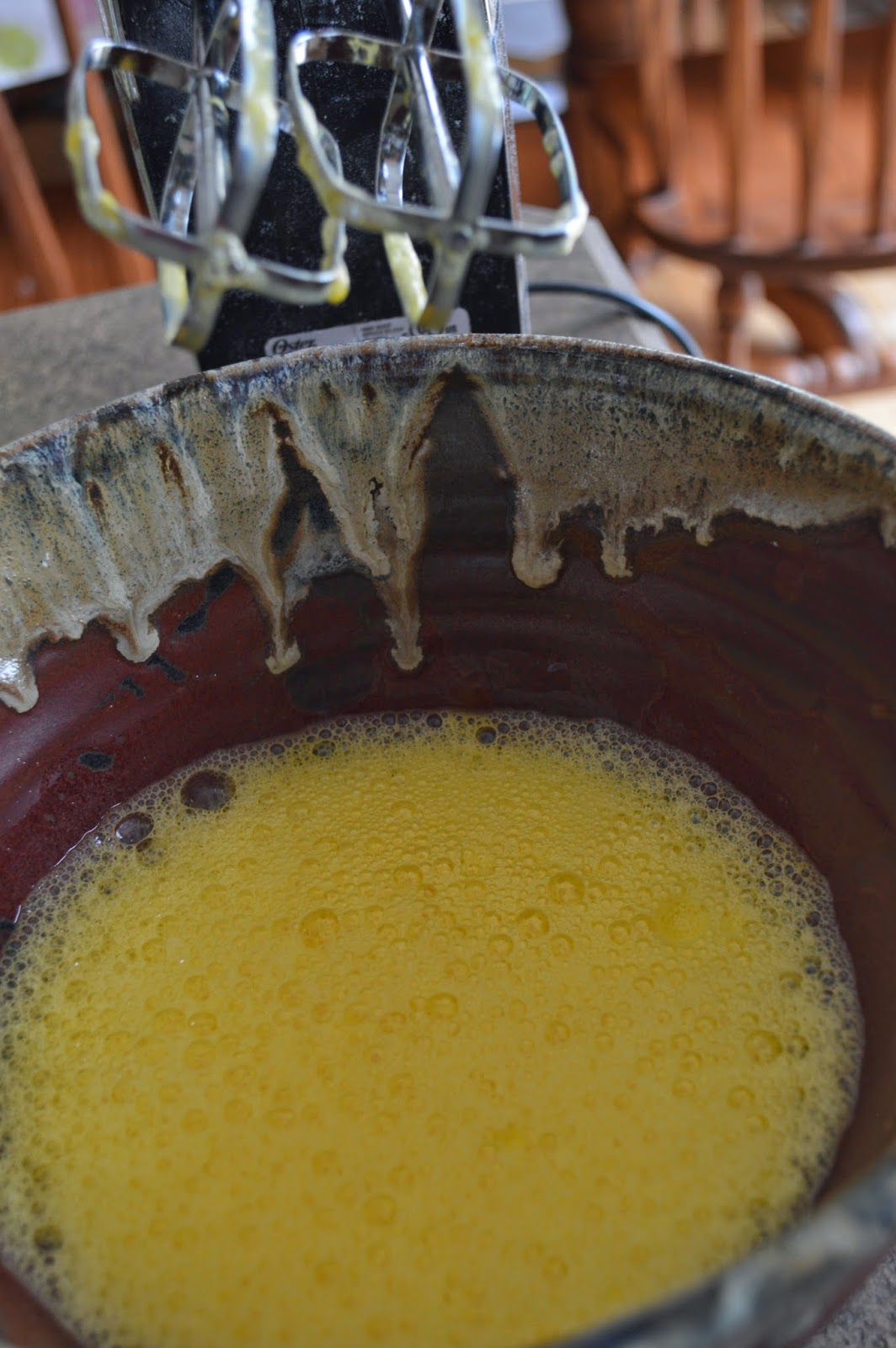 Then add a cup and a quarter of dark cocoa powder (I go for for the Dutch cocoa, paying homage to my roots), and a teaspoon each of baking powder, salt, and vanilla. 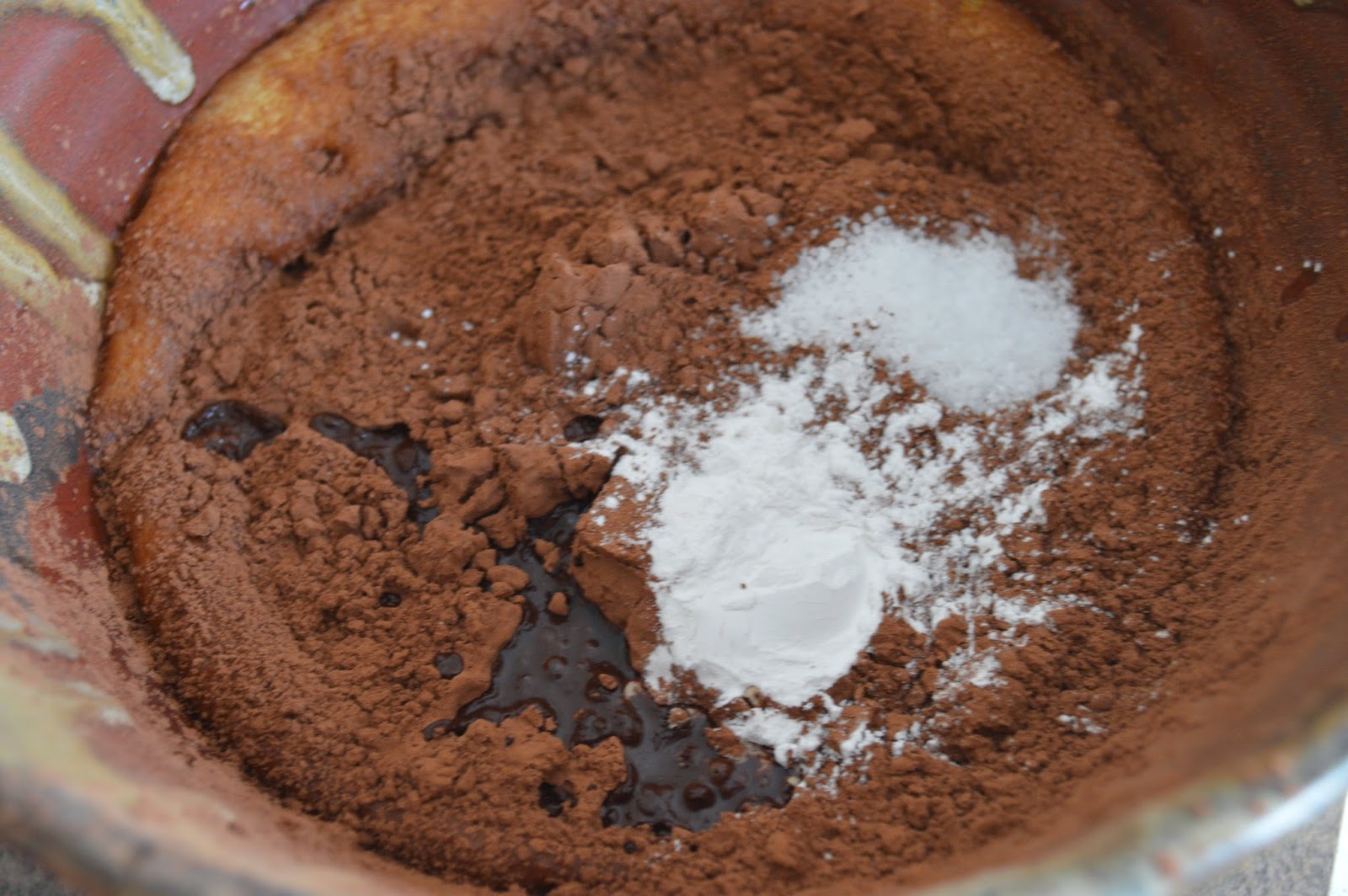 Give it all a good mixing on low.  Look out, you might get a cocoa dust cloud! 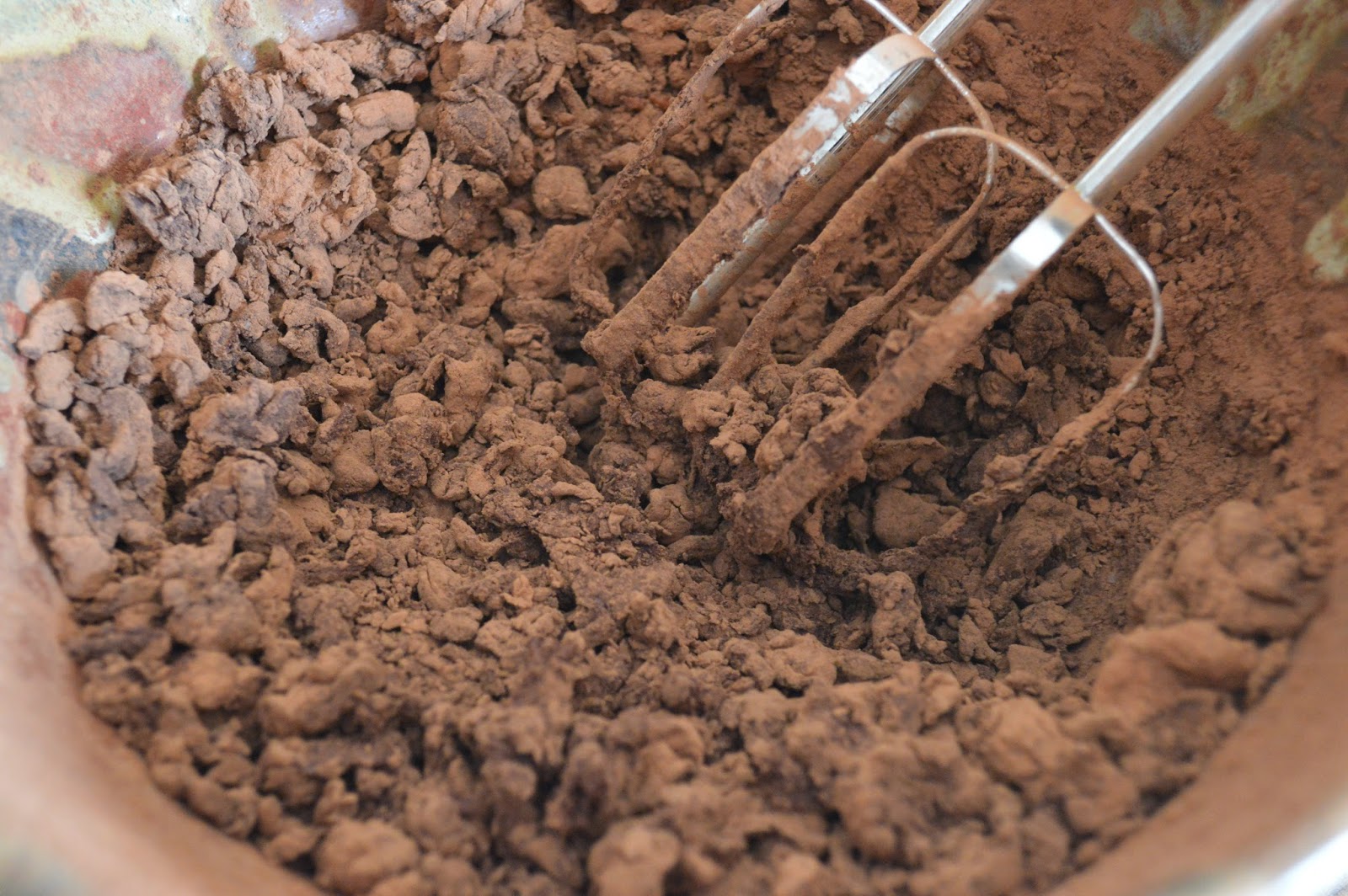 Add in the beets and the butter/sugar mix.  Mix it all again. 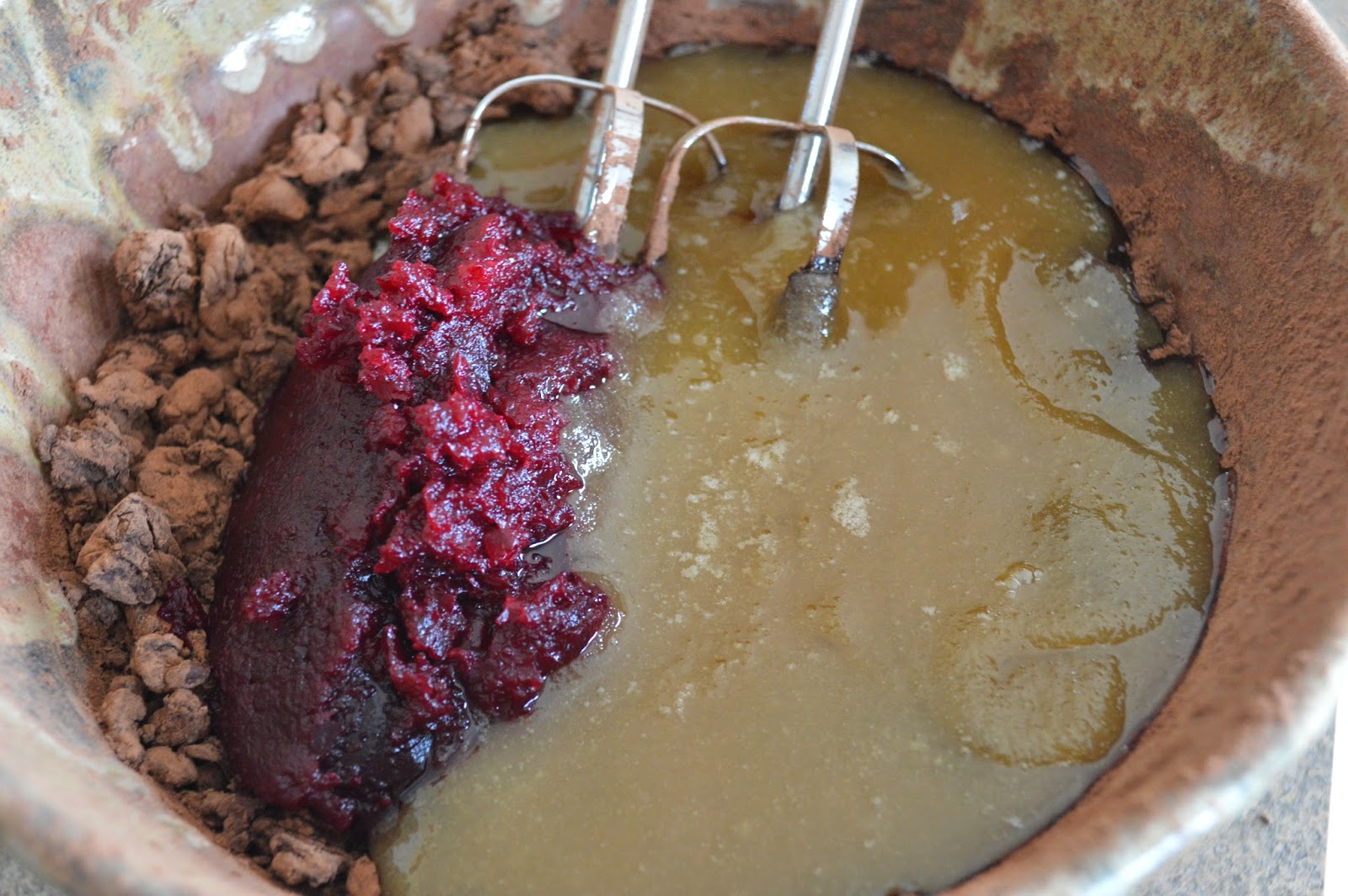 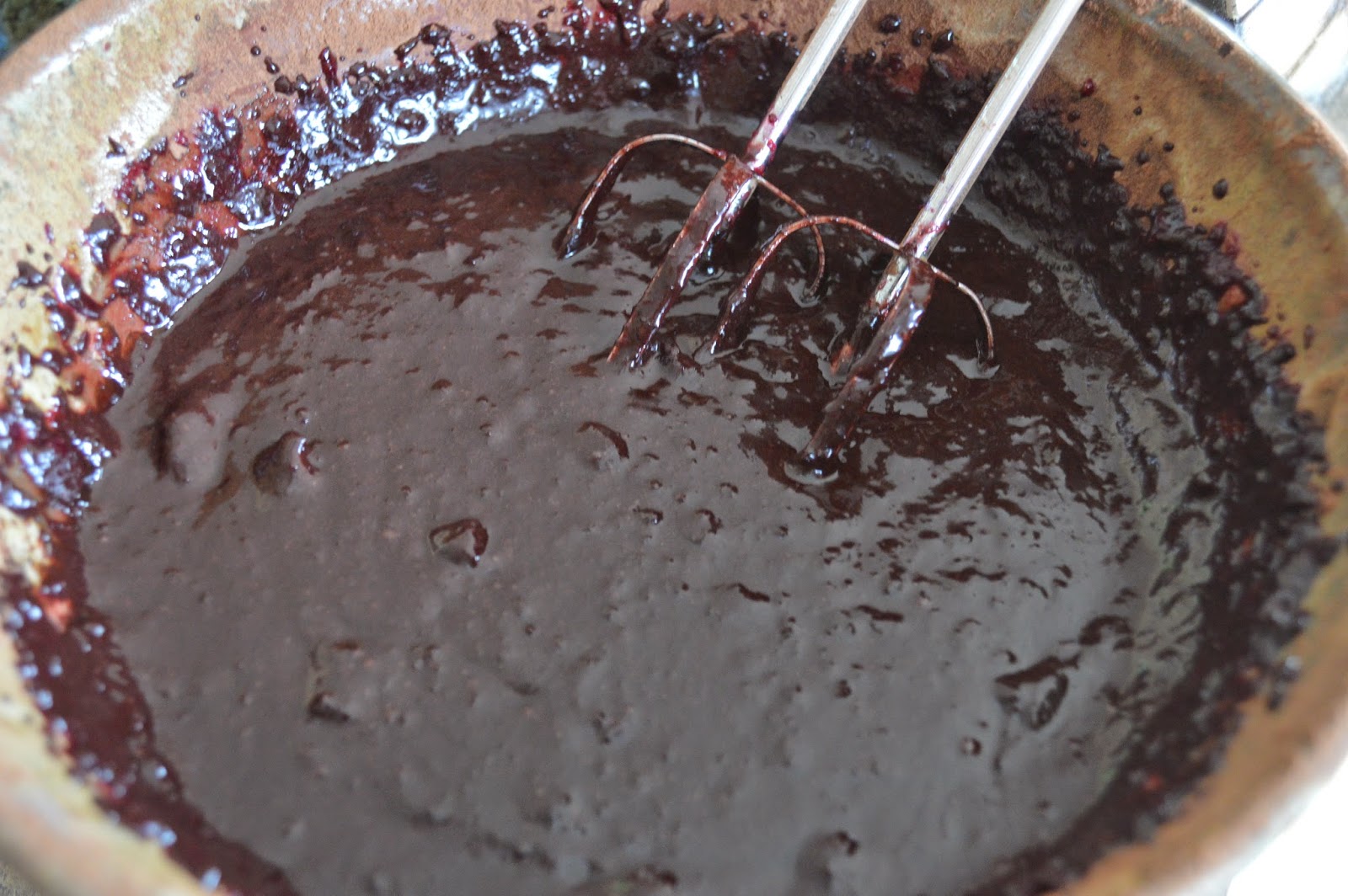 Add in 3/4 cup flour and a cup of chocolate chips.  I like the mini chips, as usual.  Mix away. 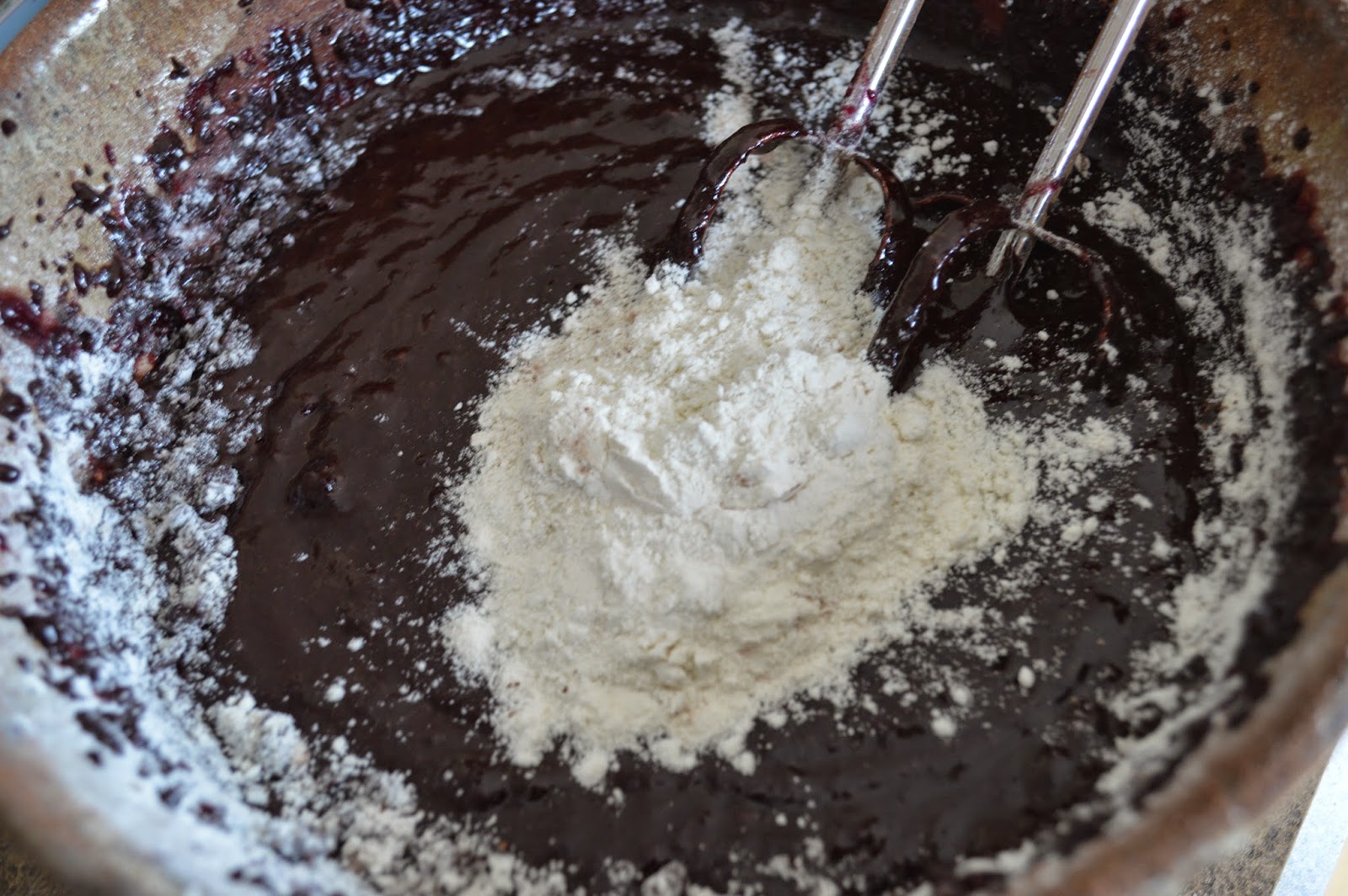 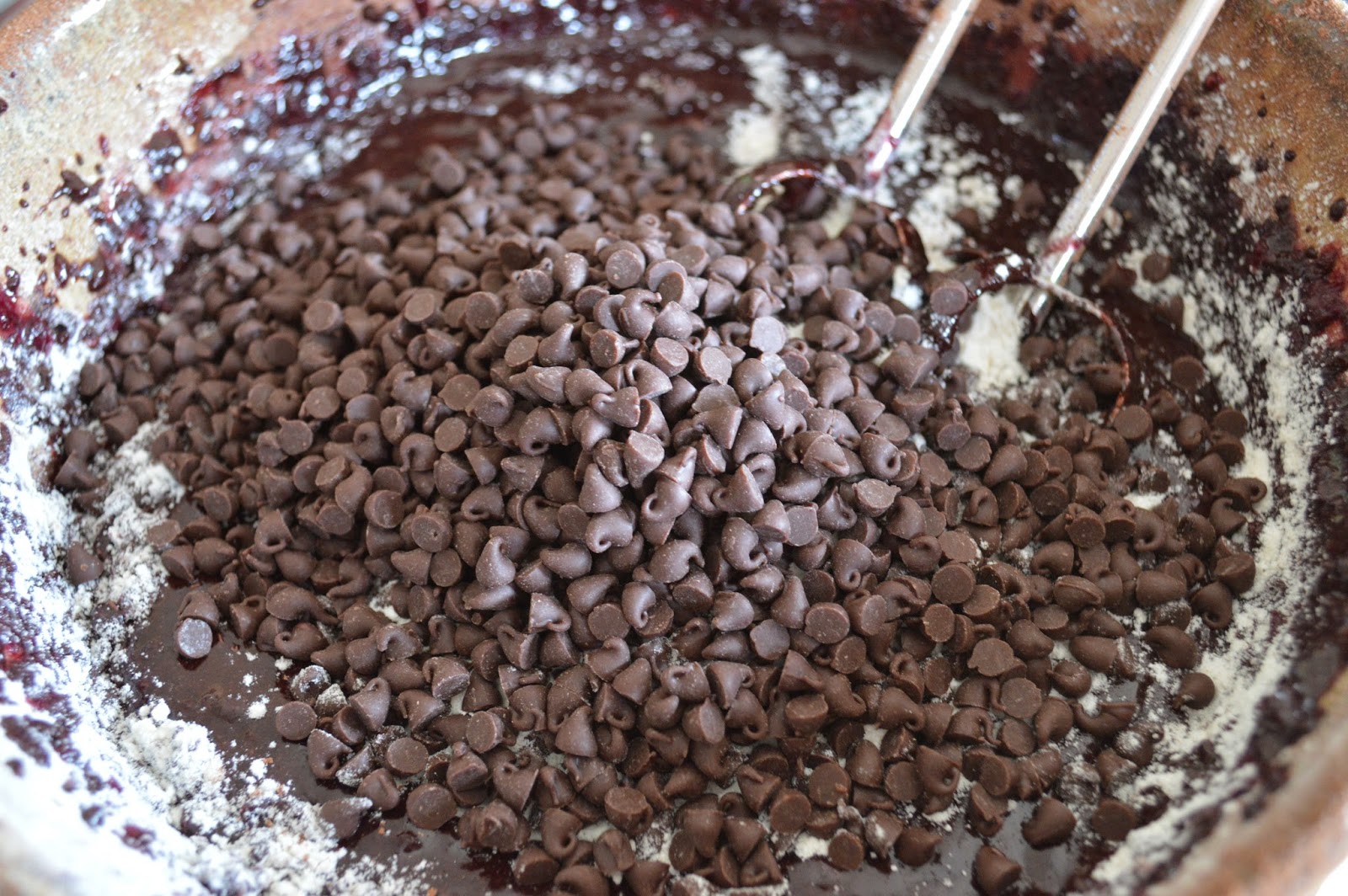 Pour it all into the pan and pop it in the oven to bake for a half hour.  It will be done when you can stick a knife in the center and it comes out clean, or with only a couple of crumbs. 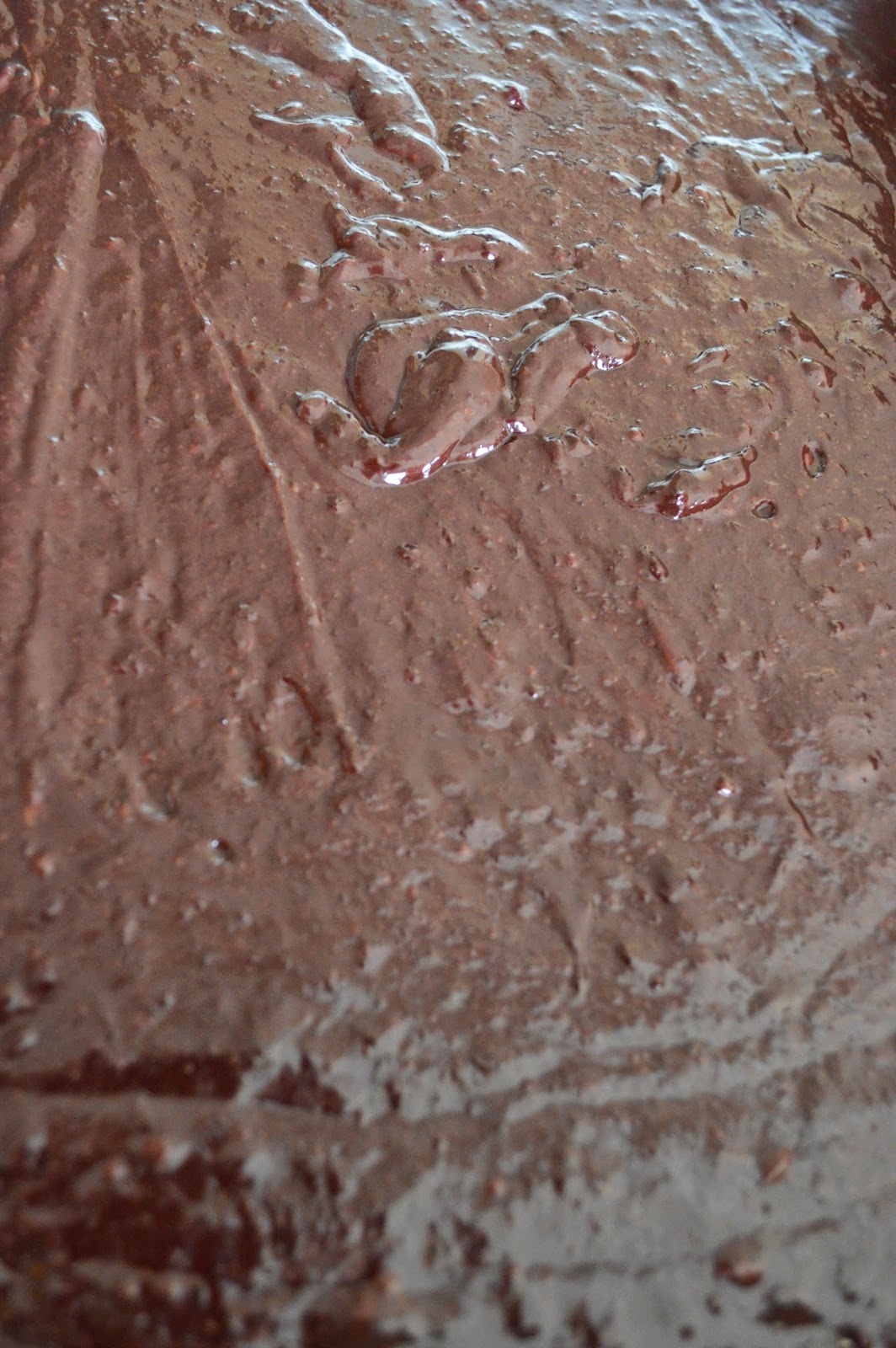 I know there are differing opinions on what makes a great brownie, and I have my feet firmly planted in the fudginess camp.  I'm not looking for a chocolate cake in a brownie...I don't even really like chocolate cake!  I want dense, rich, fudgy goodness.  But these beet brownies somehow walk the line between the two, and rather than being "meh" in the middle, they are extremely satisfying on both sides.  They are cake-like, but with a dense crumb.  And the chocolate flavor is deep and rich, but they don't feel so heavy in your gut.  Balance, my friends.  These brownies have it. 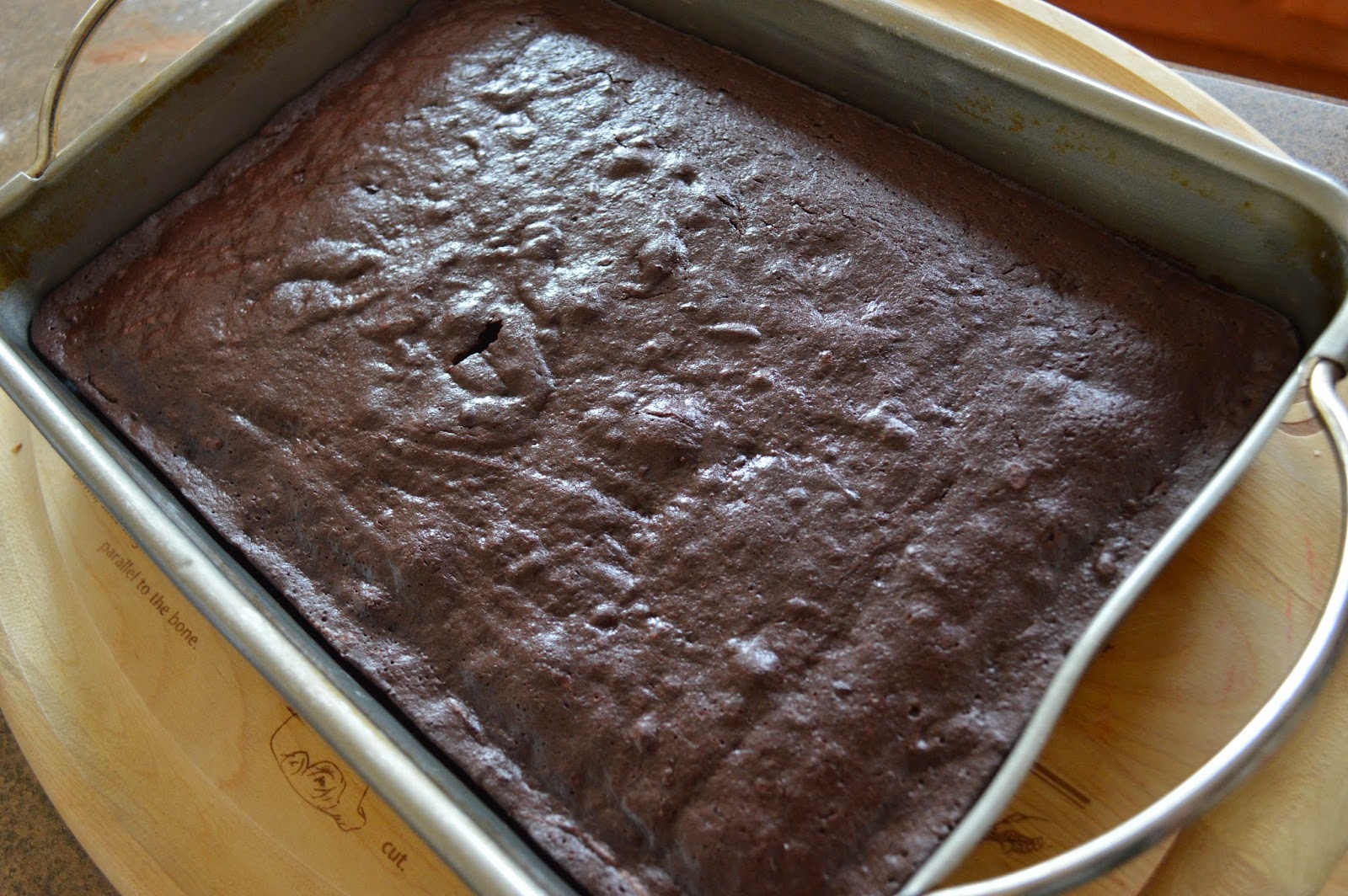 They are great on their own, but you could always fancy them up a bit.  Enjoy them with some ice cream, or top them with a dusting of powdered sugar.  Crumble them up and mash them with whipped cream.  Lose yourself in the chocolaty decadence, and forget about the guilt, because hey, veggies! 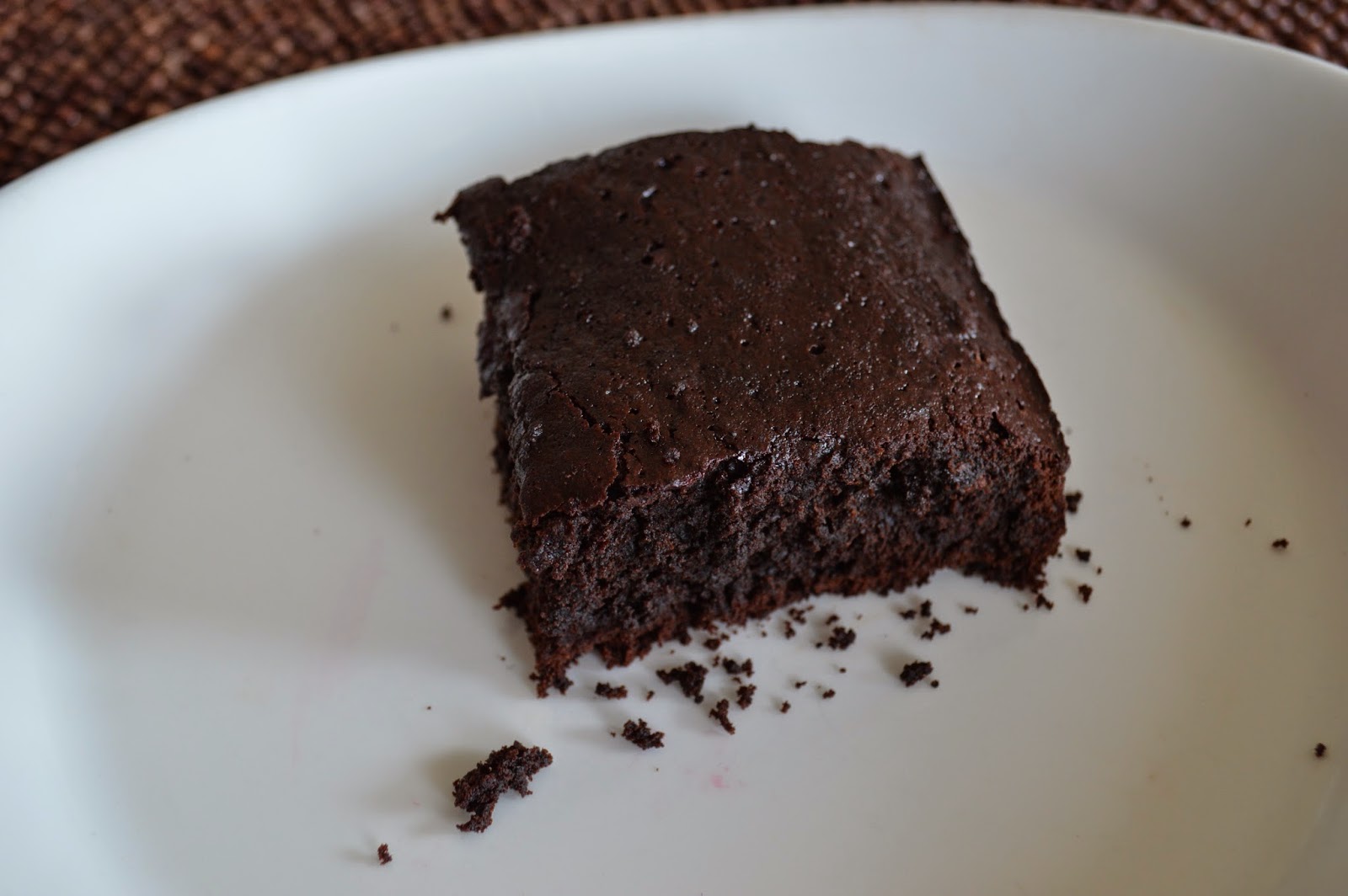 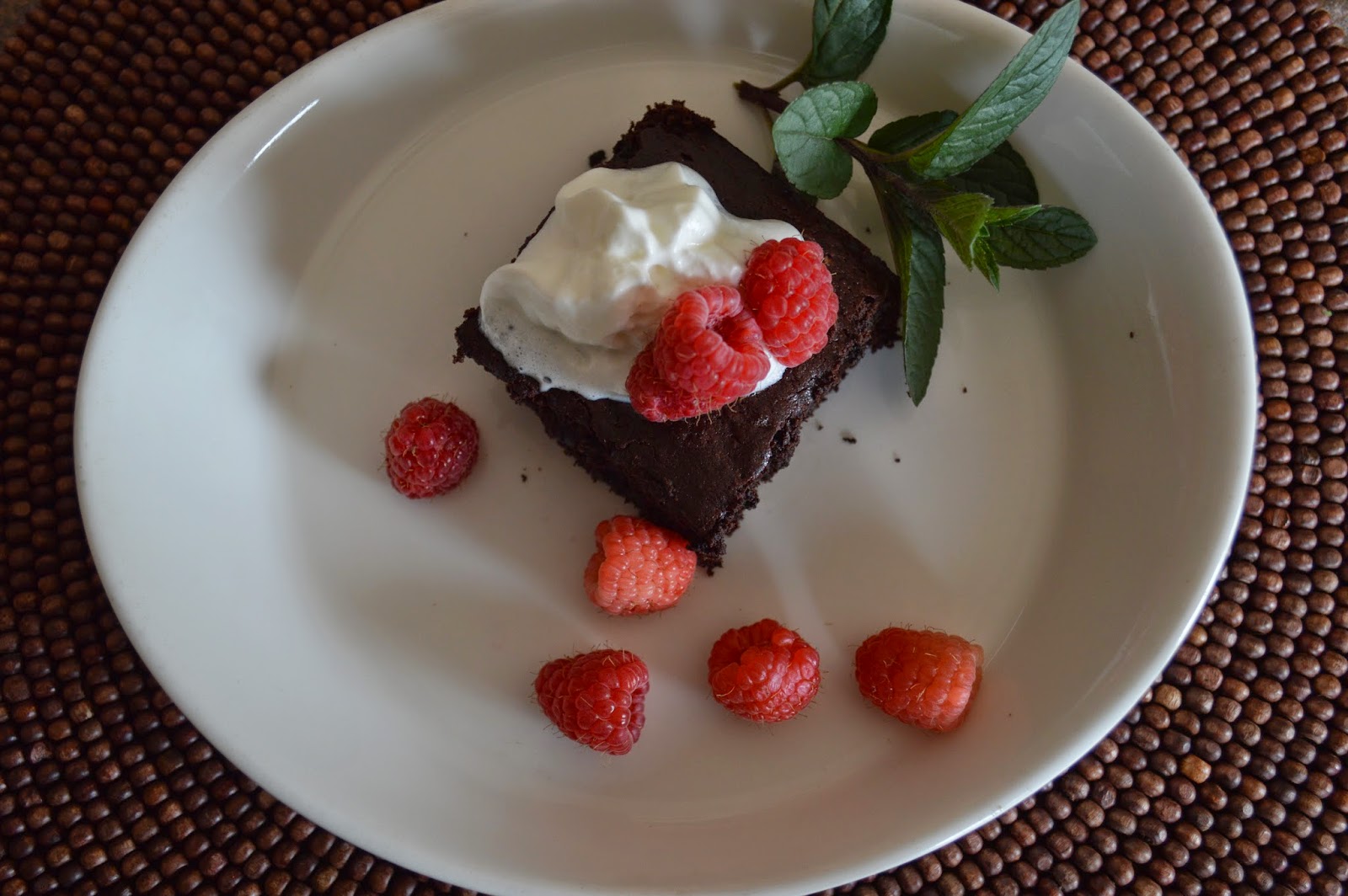 *Disclaimer*: I in no way am trying to say that these brownies, with all the butter and sugar, are health food.  Or any brownies, for that matter.  Brownies are not made for their curative powers, unless it's the emotional healing.  But are these brownies better than buying a mix from a box, or from buying pre-mades with who-knows-what in them?  Absolutely.  They are also a gateway food for showing people who "hate" beets or veggies that, yes, they can like them.  *End disclaimer*


I submitted this post to Foodie Friends Friday through Culinary Ginger!  Be sure to check out all the yumminess going on over there!