One of my family's favorite quick meals is a good quesadilla. Even Mr. Picky will eat them. As long as they're cheese. And not any of those "weird" cheeses. Monterey Jack, Colby, or other similar mild melty cheeses. Luckily, it's pretty east to customize quesadillas. 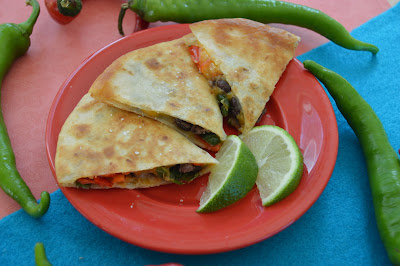 Anyways, this summer, living in a new town, we started with a new CSA. And through that CSA, I discovered shishito peppers. They are delicious, mild, and the name is fun to say. And they are fantastic in this quick and healthy quesadilla recipe!

If you can't find shishito peppers, feel free to use another mild pepper, or even a slightly spicier one, if you're into that sort of thing. Just not too hot, or you'll override all the other great flavors going on. 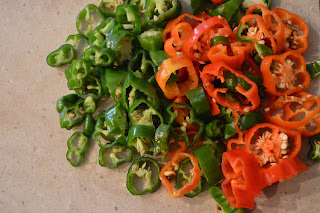 So, take as many shishito (or alternative) peppers as you want (or about a cup and a half, two cups), and chop them into slices. Heat some olive oil in a large pan and then saute the peppers until they start to brown up a bit. Get a nice roasted pepper effect on those babies.

Then add 2-3 cloves of minced garlic. Cook for just a minute until you can really smell the garlic in the air. 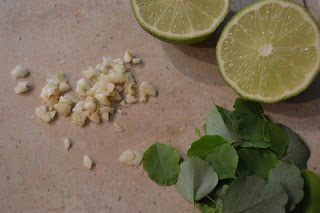 Drain and rinse a can of black beans and add that to the pan. Squeeze in the juice of a lime and a large dash of salt. Then toss in some chopped cilantro.

Side note on the cilantro: This year, I was introduced to the herb papalo. It's similar to cilantro, but a little more bold and less "soapy" to those people who are sensitive to cilantro's flavor. It's fantastic in this recipe, but hard to find. I honestly only have it because it's growing in my garden, thanks to a local farmer and her seedlings. Anyhow, if you come across it, don't miss on trying it out, and if you have it, use it in this recipe! 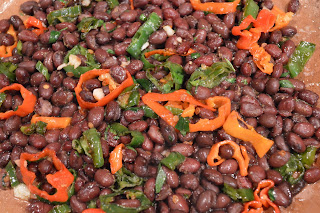 Heat the bean mixture through. Boom. That's it for that.

Shred up your favorite mild melty cheese. Chihuahua works well, but I had a co-jack on hand, so that's what I went with this time. I'd say at least 8 ounces of cheese, but it depends on how cheesy you like things and how many quesadillas you want to make.

Take regular flour tortillas in whatever size you'd like. Fill them with cheese and some of the bean filling. Fold each in half. 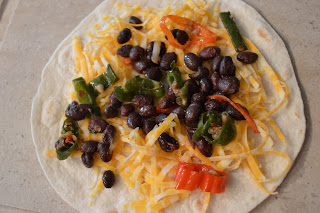 In a pan large enough to hold the tortilla size you're using, heat a little vegetable oil (about a teaspoon) or other oil of your choice. Quickly heat the quesadillas 1-2 at a time, until golden and crisp on the outside and the cheese is melted and glues the quesadilla together in a delicious, portable package. Flip to crisp the other side. Remove to a paper-towel lined dish to wick off any extra oil. Repeat with remaining quesadillas.

Serve with a little sprinkle of coarse salt and the salsa of your choice. 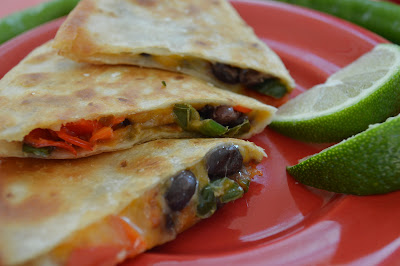 If you have extra of the black bean filling, it's great in a rice bowl or salad of its own. Or you can save it for later quesadillas. 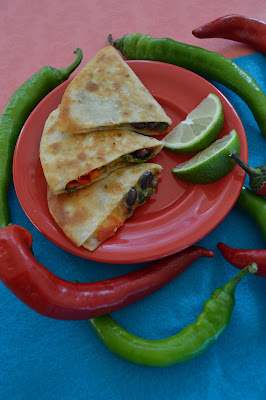 Chop the peppers into rounds. Heat some oilve oil in a large pan and cook the peppers until they start to brown. Add in garlic and cook for a minute to release scent. Add in beans, juice of the lime, and cilantro. heat through and set aside to cool slightly.

Shred cheese. Fill tortillas with a decent layer of cheese and black bean filling, then fold in half.

In a pan that will fit the tortilla size you're using, heat a bit of vegetable oil. Place quesadilla in pan and heat until golden and crisp. Use tongs to flip and repeat on opposite side. Remove to paper towel lined plate. Repeat with remaining quesadillas.

Serve warm with a sprinkle of coarse salt and the salsa of your choice. 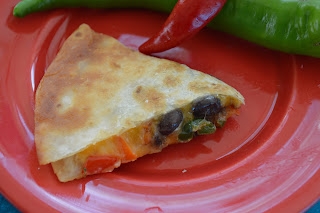